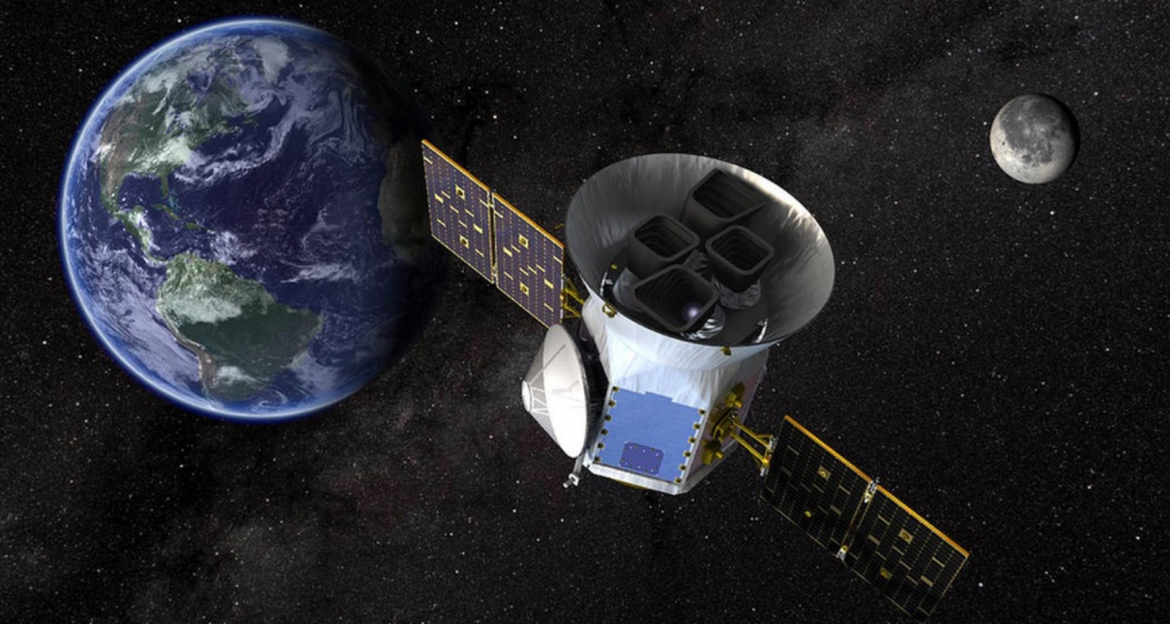 The yet-to-be-confirmed exoplanets are located 59.5 light years from Earth in the Pi Mensae system and 49 light years away in the LHS 3844 system.

Following a successful launch on 18 April 2018 aboard a SpaceX Falcon 9 rocket from SLC-40 at the Cape Canaveral Air Force Station, Florida, TESS was injected into an orbit aligned for a gravity assist maneuver one month later with the Moon to send the telescope into its operational 13.65-day orbit of Earth.

TESS’s orbit is highly unique, with the trajectory designed so the telescope is in a 2:1 resonance with the Moon at a 90° phase offset at apogee (meaning the telescope maintains a separation from the Moon so the lunar gravity field doesn’t perturb TESS’ orbit but at the same time keeps the orbit stable) to allow the spacecraft to use as little of its maneuvering fuel as possible to achieve a hoped-for 20 year life.

At the time of launch, mission scientists and operators noted that first light images were expected from TESS in June 2018 following a 60-day commissioning phase.

While it is not entirely clear what happened after launch, what is known is that the commissioning phase lasted 27 days longer than expected, stretching to the end of July.  TESS’ first science and observational campaign began not in June but on 25 July 2018.

By 7 August, the halfway point in the first science observation period, TESS took what NASA considers to be the ceremonial “first light” images of the telescope’s scientific ventures.

TESS acquired the image using all four cameras during a 30-minute period on Tuesday, 7 August.  The images include parts of a dozen constellations from Capricornus to Pictor, both the Large and Small Magellanic Clouds, and the galaxies nearest to our own. 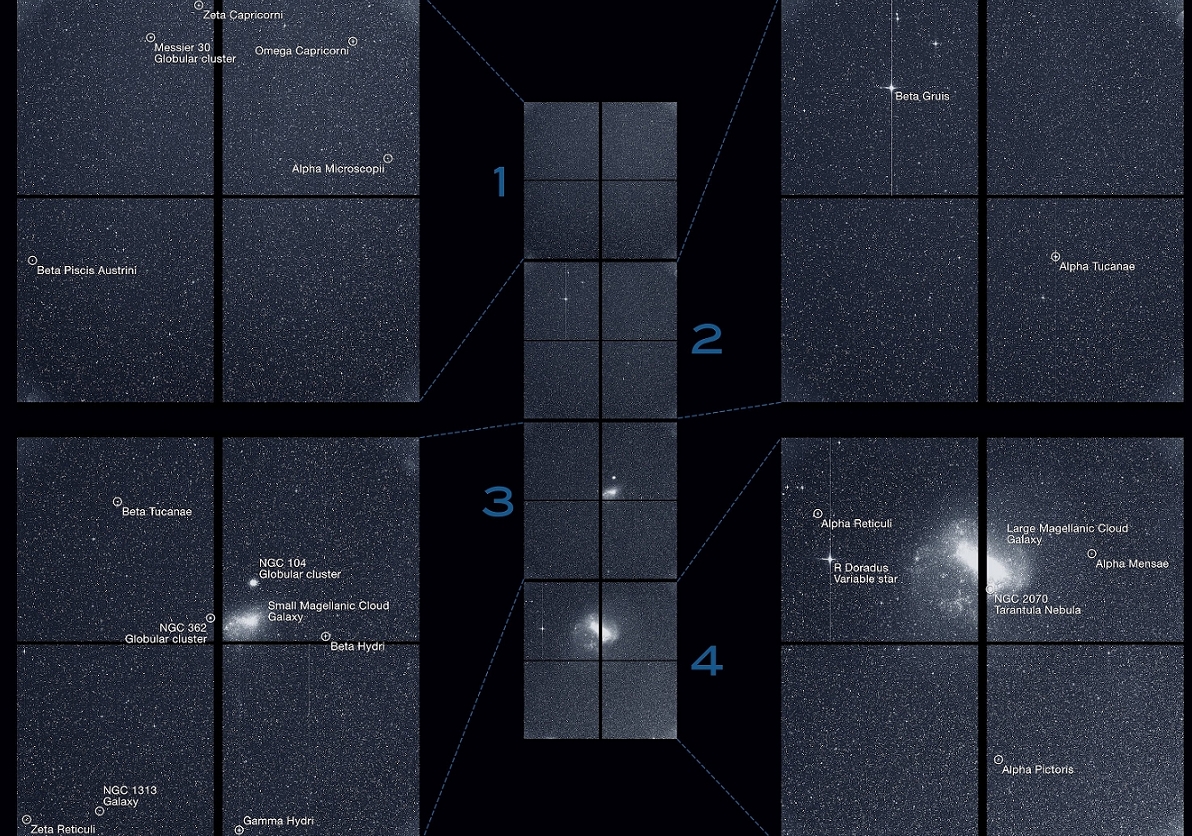 Ceremonial “First Light” image captured by TESS on 7 August 2018 showing the full Sector 1 image (center) and close ups of each of the 4 camera groups (left and right). (Credit: NASA/MIT/TESS)

“In a sea of stars brimming with new worlds, TESS is casting a wide net and will haul in a bounty of promising planets for further study,” said Paul Hertz, astrophysics division director at NASA Headquarters.  “This first light science image shows the capabilities of TESS’ cameras and shows that the mission will realize its incredible potential in our search for another Earth.”

George Ricker, TESS’ principal investigator at the Massachusetts Institute of Technology’s Kavli Institute for Astrophysics and Space Research, added, “This swath of the sky’s southern hemisphere includes more than a dozen stars we know have transiting planets based on previous studies from ground observatories.”

While TESS orbits Earth every 13.65 days, its data collection phase for each of its 26-planned observation sectors of near-Earth sky lasts for two orbits so the telescope can collect light data from each section for a total of 27.4 days.

Unlike some missions which only transmit data back to Earth after observational campaigns end, TESS transmits its data both in the middle and at the end of each campaign when the telescope swings past its perigee (closest orbital approach to Earth).

.@NASA_TESS's Post-Launch Assessment Review (PLAR) was successful today! This @NASA review evaluated readiness of the spacecraft systems to proceed with routine operations. TESS is performing great on orbit and continues to send back exoplanet science data for further analysis! pic.twitter.com/J48DobVkE7

On 22 August, after TESS completed its first observation campaign of a section of the Southern Hemisphere sky, the telescope transmitted the second batch of light data to Earth through the Deep Space Network.

From there, the information was processed and analyzed at NASA’s Science Processing and Operations Center at the Ames Research Center in California – which provided calibrated images and refined light curves for scientists to analyze and find promising exoplanet transit candidates.

NASA and MIT then made that data available to scientists as they search for the more than 22,000 exoplanets (most of those within a 300 light-year radius of Earth) that TESS is expected to find during the course of its two-year primary mission.

Given the sheer number of exoplanets TESS is expected to find in the near-Earth neighborhood, it is not surprising that the first observation campaign has already returned potential exoplanet candidates – the first of which was confirmed by NASA via a tweet on Wednesday, 19 September.

The @NASA_TESS team is excited to announce the mission's first candidate planet — a super-Earth around the bright star Pi Mensae, nearly 60 light-years away. The planet orbits every 6.3 days. The discovery is now being reviewed by other scientists to validate it. Stay tuned!

TESS’ first exoplanet candidate is Pi Mensae c – a super-Earth with an orbital period of 6.27 days.  According to a draft of the paper announcing the discovery, several methods were used to eliminate the possibility of this being a false detection or the detection of a previously unknown companion star.

The Pi Mensae system is located 59.5 light years from Earth, and the new exoplanet – if confirmed – would be officially classified Pi Mensae c, the second known exoplanet of the system.

Exoplanet’s official classifications derive from the name of the star they orbit followed by a lowercase letter indicating the order in which they were discovered in a particular system.

The order in which exoplanets are discovered does not necessarily match the order (distance from closest to farthest) in which they orbit their parent star.

Moreover, the lowercase letter designation begins with the letter “b”, not the letter “a”.  Thus, the first discovered exoplanet in a particular system will bear the name of its parent star followed by a lowercase “b”.

Subsequent exoplanets orbiting the same start or stars (as the case may be), regardless of whether they orbit closer to or farther away from the parent star than the first discovered exoplanet will then bear the letters c, d, e, etc. 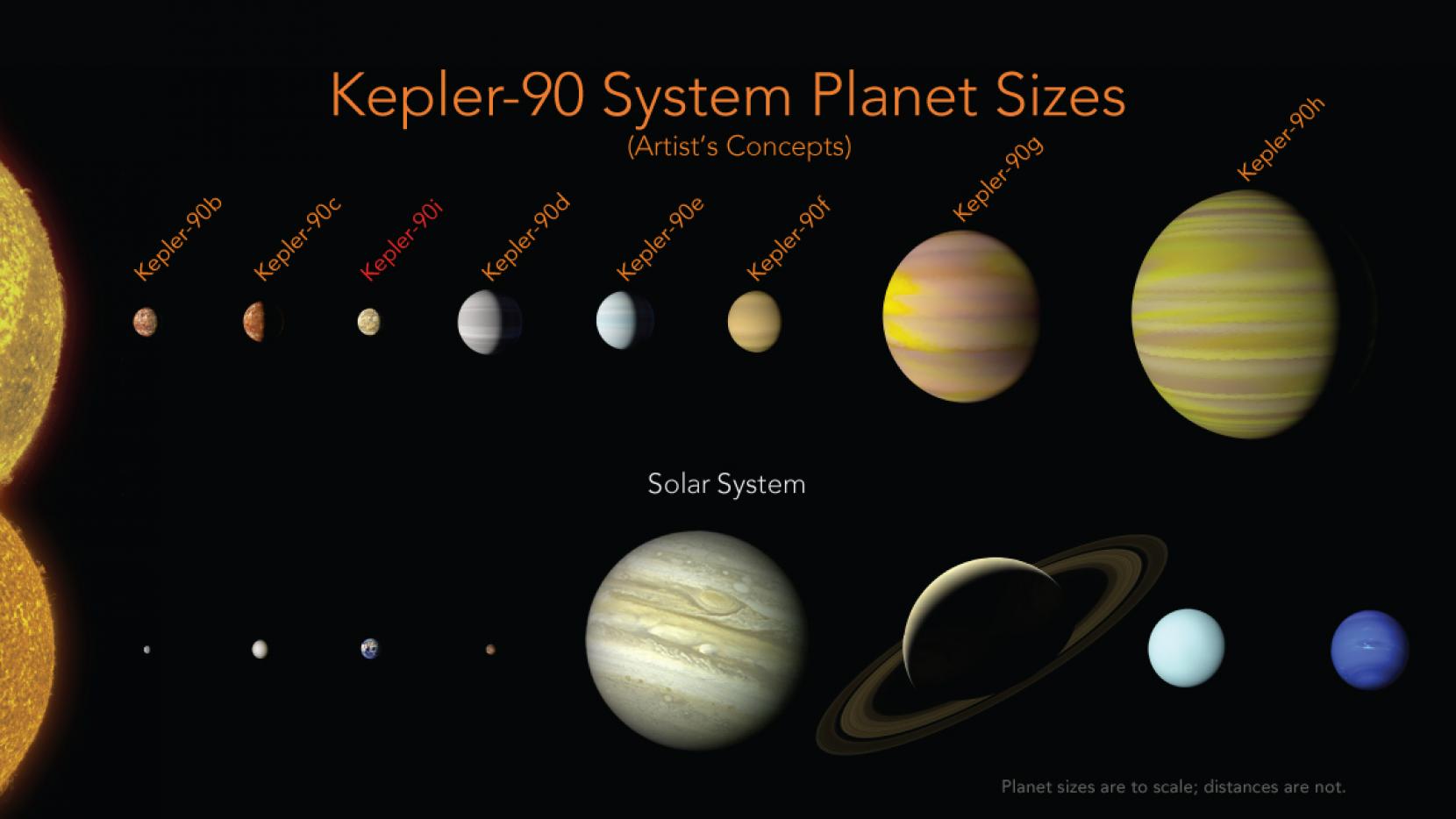 Therefore, confirmation of the new exoplanet candidate in the Pi Mensae system would make the planet Pi Mensae c.

Pi Mensae b, a superjovian, was discovered on 15 October 2001 using the radial-velocity method of detection via the Anglo-Australian Telescope operated by the Australian Astronomical Observatory at Siding Spring Observatory. 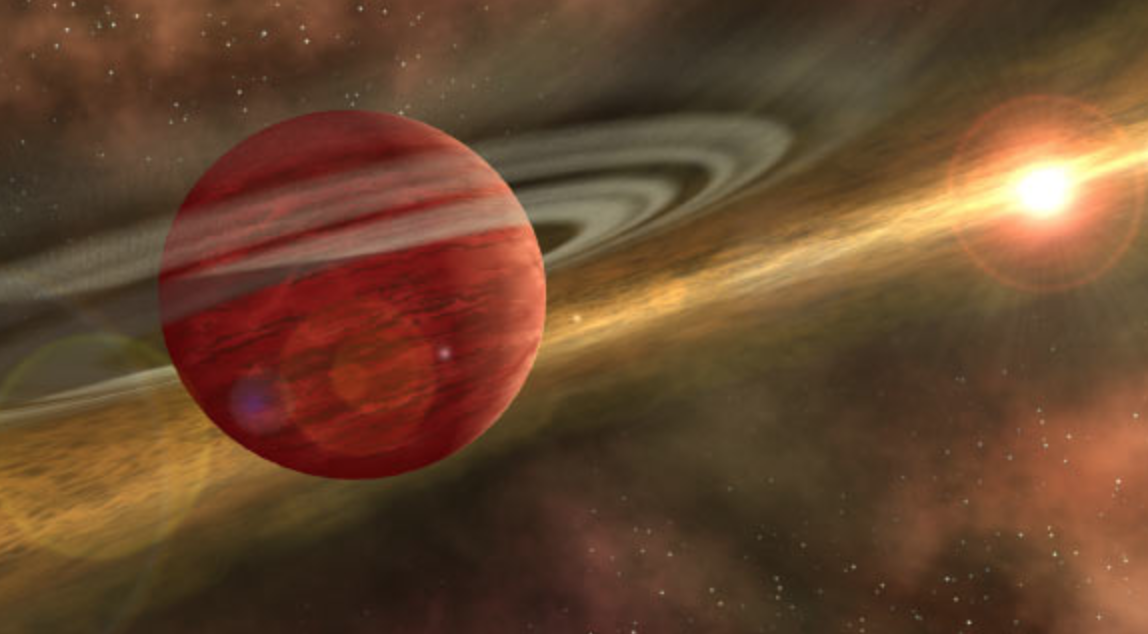 With a 1.21 AU periastron, Pi Mensae b passes through its parent star’s habitable zone before arcing out to apastron (which lies farther out than Jupiter’s orbit of our Sun).

Given the extreme eccentricity and the fact that the planet passes through the habitable zone during each orbit, it would likely have disrupted the orbit of any potentially Earth-like planet in that zone due to its extreme mass of more than 10 times that of Jupiter.

Due to its proximity to Earth and its high luminosity, the star has an apparent magnitude of 5.67 and is visible to the naked eye in dark, clear skies.

A second @NASA_TESS candidate planet has been discovered! Slightly bigger than Earth, this planet orbits LHS 3844, a M dwarf star 49 light-years away, every 11 hours. This find is being reviewed by other scientists, and we're looking forward to studying this cool "hot Earth."

As an even greater testament to TESS’ power, just hours before publication of this article, the TESS team confirmed a second exoplanet candidate from the first observation campaign.

The second exoplanet candidate is LHS 3844 b.  It orbits its parent star – an M dwarf – every 11 hours and is located 49 light years from Earth.

The exoplanet candidate is described by NASA and the TESS team as a “hot Earth.”

Given the wealth of light data for scientists to pour through from the now-completed first two of 26 observation sectors, it is highly likely that hundreds if not thousands of exoplanets candidates will be identified in the coming months and years — with tens of thousands of candidate planets to follow in the remaining 24 sectors of sky to be searched.

SpaceX finalizing Pad 39A upgrades for return to crew operations