Thirty years after Return To Flight from Challenger, Commercial Crew strives for culture of safety 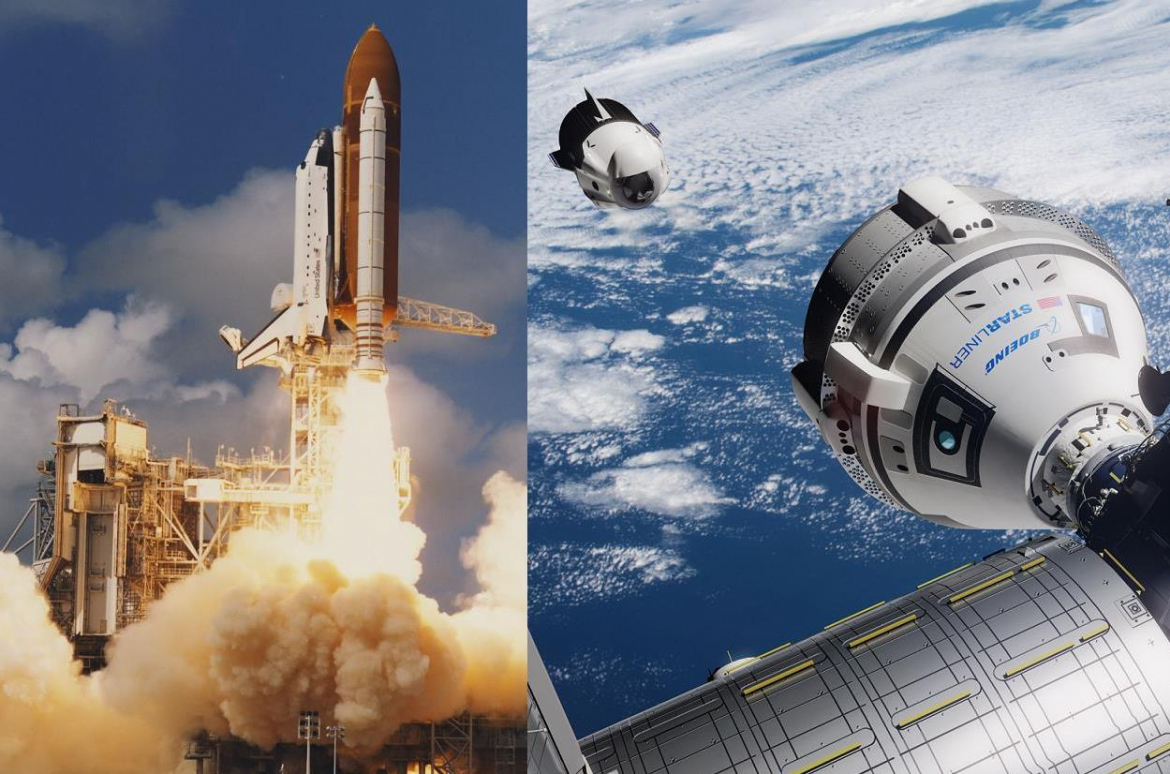 Thirty years ago this weekend, after a two and a half year stand down and an extremely difficult external- and self-examination of a lack of safety within the program, NASA succeeded in returning the Space Shuttle fleet to flight following the devastating loss of the Space Shuttle Challenger and her seven-member crew on the STS-51L mission.

Now, in a radically different era for spaceflight, NASA and its Commercial Crew partners in SpaceX and Boeing are striving to instill a culture of safety that looks beyond just the hard data and probabilistic risk assessment numbers – this as both providers say their vehicles now meet NASA’s 1-in-270 Loss Of Crew requirement benchmark.

The road to STS-26 was a long, at times painful, but ultimately rewarding moment within the Space Shuttle Program.  But it did not come without harbingers of the continued safety challenges posed by spaceflight.

On 28 January 1986, Space Shuttle Discovery was in storage in VAB High Bay 2 (HB-2) while sister Orbiters Atlantis and Columbia where in the two Orbiter Processing Facilities (OPFs) at Kennedy undergoing pre-mission processing for the STS-61G launch of the Galileo probe to Jupiter (Atlantis) and down mission processing following completion of STS-61C 10 days prior (Columbia).

Inside the VAB stacking High Bays, a Solid Rocket Booster (SRB) stack was already assembled on MLP-1 (Mobile Launch Platform -1) for the STS-61E mission of Columbia scheduled for 6 March 1986. 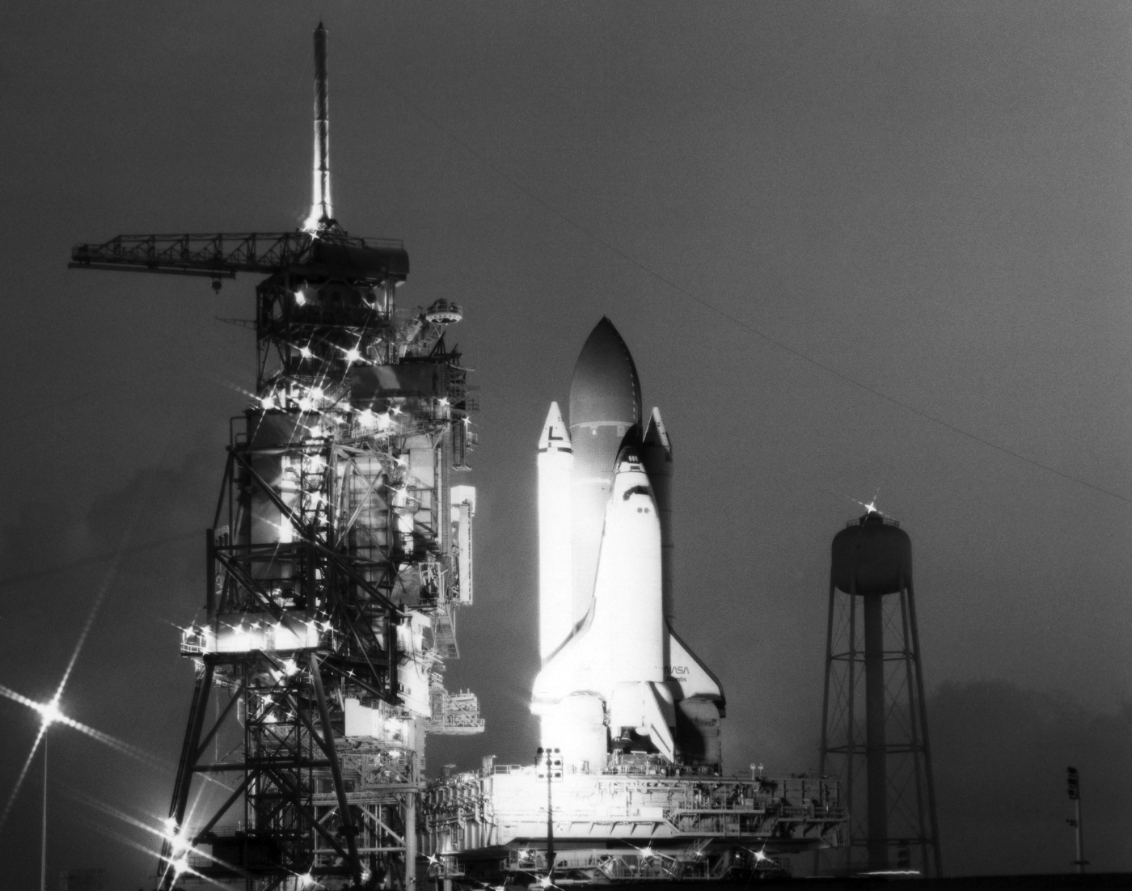 An engine-less Atlantis arrives at LC-39B on 8 October 1986 – one of only two Shuttle stacks to rollout to a launch pad for a purpose other than final launch processing. (Credit: NASA)

As the investigation into and recovery from the Challenger disaster proceeded in the summer of 1986, NASA decided to use the STS-61E stack for a ground test and fit check operation at LC-39B with an engine-less Atlantis.

In June 1986, Atlantis was brought over to the VAB and waited in storage until September, when she was mated to the STS-61E SRB/ET stack before being rolled out on 8 October 1986 to LC-39B for a multi-month flow to fit check newly installed weather protection panels, conduct a countdown demonstration test, and permit emergency pad evacuation training.

After completing all pad activities in support of eventual Return To Flight operations, Atlantis rolled back to the VAB in November 1986 and remained mated to her External Tank until March 1987 when she was finally demated.

Thereafter, Discovery was officially selected as the Orbiter to fly the STS-26 Return To Flight mission.

With NASA and its contractors now deep into flight hardware redesign and safety improvements, Discovery was moved into OPF-1 on 30 October 1987 for pre-mission processing and incorporation of over 200 safety modifications mandated for the Orbiters in the wake of Challenger.

While Discovery underwent OPF processing, technicians began stacking the Redesigned Solid Rocket Motor segments in VAB HB-3 on MLP-2, the same MLP from which Challenger had launched on STS-51L.

The left-hand aft segment Solid Rocket Booster is brought into the VAB as stacking begins for the STS-26 Return To Flight mission. (Credit: NASA)

SRB stacking began on 29 March 1988, with engineers stacking all four propellant SRB segments for the left-hand booster first before stacking the right-hand booster.  SRB stacking and closeout operations wrapped in early June, and External Tank #28 was brought over from its checkout cell in VAB HB-4 and mated to the SRBs on 10 June.

Discovery herself spent 221 days in OPF-1 before being towed on her wheels to the VAB on 21 June 1988.  Discovery was then connected to the hoisting/mating crane, her landing gear retracted for flight, and then lifted over the transom into HB-3 where she was mated to her SRB/ET stack.

On 4 July, Discovery rolled out to LC-39B for over two months of pad processing – some of which was designed to accomplish the final elements of complete Space Shuttle Program recertification.

Shortly after Discovery reached the launch pad, NASA tested the Emergency Egress System (slide wire baskets) with a person inside one of the baskets for the first time.  NASA astronaut Charlie Bolden became the first of only 3 people to ever ride the baskets down from the Fixed Service Structure (launch tower) to their destination on the ground when he did so on 8 July 1988.

After completing the first ride, Bolden immediately took the trip again, this time with safety personnel George Hoggard and Albert  Bumgarden.  To this day, the only time people have ever ridden the slide wire baskets at either Kennedy launch pad was 8 July 1988.

Doing this kind of human-in-the-loop test with a Shuttle on the pad provided an as real as possible environment for an astronaut evacuating a fully-fueled Shuttle in an on-pad emergency situation. 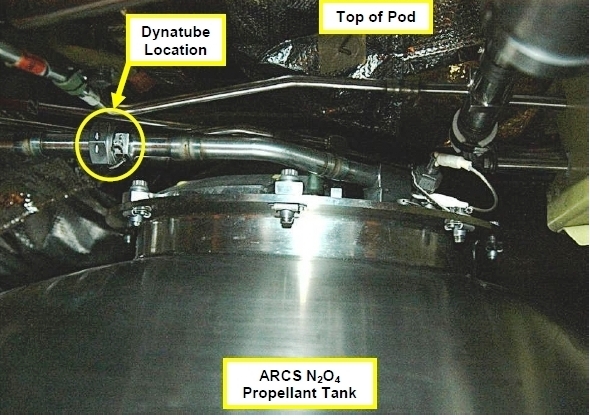 Location of the leak inside the left-hand OMS pod of Discovery. (Credit: NASA)

Elsewhere on the vehicle, technicians filled Discovery’s Orbital Maneuvering System (OMS) pods with their hypergolic propellants – upon which a leak was detected in the left pod.

Technicians found the leak in a dynatube fitting in the vent line for the Reaction Control System nitrogen tetroxide storage tank and were able to stabilize the leak by “pulse purging” the tank with helium.

The leak was deemed not serious enough to mandate immediate action, and plans were created to permanently fix the leak for flight after two critical tests where completed.

The tanking test, which was only partially completed, occurred on 1 August 1988 and involved fueling Discovery’s External Tank with a planned 536,000 gallons of liquid hydrogen and liquid oxygen.

The test revealed a few problems with Ground Support Equipment that caused unplanned holds throughout the course of the tanking test – notably that the loading pumps in the liquid oxygen storage farm did not function properly. 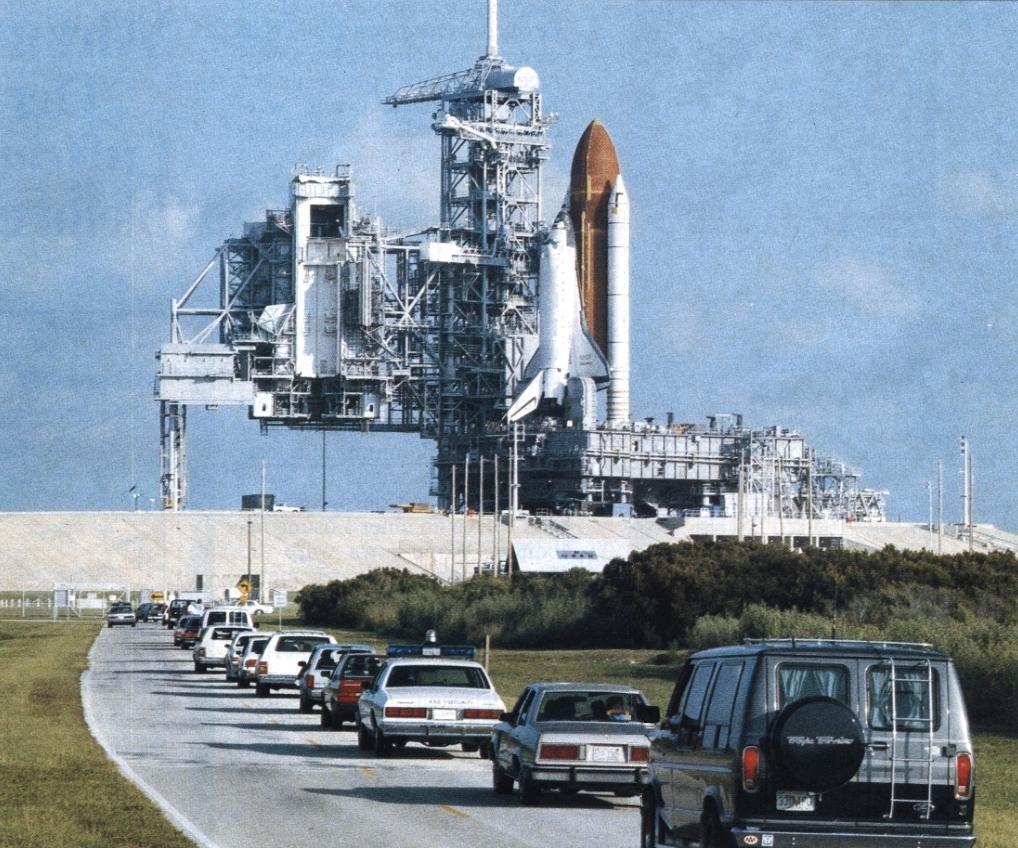 Cars full of people eager to see Space Shuttle Discovery as she arrived at LC-39B on 4 July 1988 for final launch pad processing operations ahead of Return To Flight line up on an access road to Pad-B. (Credit: NASA)

With only a partial fill in the liquid hydrogen tank, NASA decided the test was successful enough and met the recertification criteria and opted not to repeat the standalone tanking test.  Instead, the agency would proceed to the Flight Readiness Firing (FRF) – which would, by necessity, involve filling the External Tank again with a full load of propellants (thus acting as a de facto tanking test that, if successful, would proceed to engine firing).

Engineers quickly traced the liquid hydrogen leak to a pressure monitoring connector and replaced and leak checked the 8-inch fill line seals prior to the FRF.

Before Return To Flight, FRFs had only been required for the maiden launches of each new Shuttle Orbiter to achieve final Main Propulsion System flight certification for each vehicle (though Challenger needed two FRFs – December 1982 and January 1983 – due to a hydrogen leak in all three of her engines installed for STS-6).

For Return To Flight, Discovery’s critical FRF test was scheduled for the morning of 4 August and would take the launch team through the entire countdown and planned 21.8-second hold-down firing of Discovery’s engines (SSMEs).

On the morning of the FRF, the count progressed nominally through fueling operations (verifying fixes made after the partial tanking test four days prior), and the team polled “Go” to enter the terminal count at T-9 minutes.

At T-10 seconds, the PASS (Primary Avionics Software System) – four of Discovery’s five onboard computers – sent commands to the Main Engine Controllers on each SSME to open and close a sequence of valves in preparation for Main Engine start.

The late-count cutoff unexpectedly forced the launch team into an opportunity to practice unexpected cutoff and safing procedures (though they had already been planning to conduct those procedures upon engine shutdown following a successful FRF).

Engineers spent the next six days replacing the hydrogen bleed valve on SSME-2 and getting Discovery back in FRF posture.

The FRF was subsequently conducted on Sunday, 10 August 1988 and ran for the full duration of 21.6 seconds, with over 700 sensors on Discovery, the newly redesigned SRBs, and the launch pad gathering data on the test firing.

After the FRF, the STS-26 payload (TDRS-C – Tracking and Data Relay Satellite -C) was brought to the launch pad and transferred into the Rotating Service Structure’s (RSS’s) Payload Changeout Room. 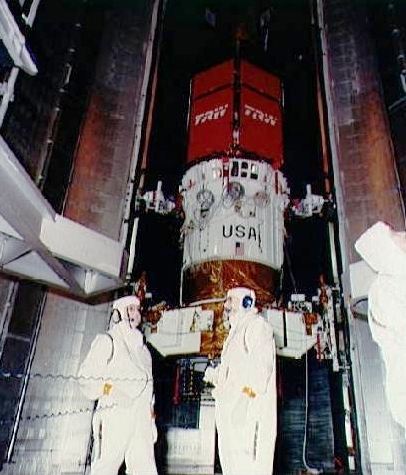 TDRS-C – Discovery’s primary payload – is loaded into her payload bay from the Payload Changeout Room in the Rotating Service Structure of LC-39B. (Credit: NASA)

The RSS was then moved back around Discovery, and technicians began repairs to the Orbiter’s left OMS pod by cutting four holes into two bulkheads.  A metal clamshell was then bolted around the leaking dynatube fitting and the clamshell filled with Furmanite – a dark thick material which consists of graphite, silicon and heavy grease and glass fiber.

After leak checks, covers were bolted over the holes and the tank was pressurized to monitor any decay.  No leakage or decay in pressure was observed and the fix was deemed a success.

The five member flight crew then travelled to KSC for the Terminal Countdown Demonstration Test, which was completed on 8 September.

Post-FRF reviews and a sequence of Flight Readiness Reviews (FRRs) revealed that all was ready for launch, and a formal launch date of 29 September 1988 was set.

As the count progressed, Upper Level Winds were observed to be quite different from the usual autumn pattern in place over Central Florida.  Overall, winds were much lighter than expected and from a different direction – creating a mismatch between the profile Discovery’s computers were programmed to fly the vehicle through and winds / atmospheric conditions she would experience during the critical Max-Q period.