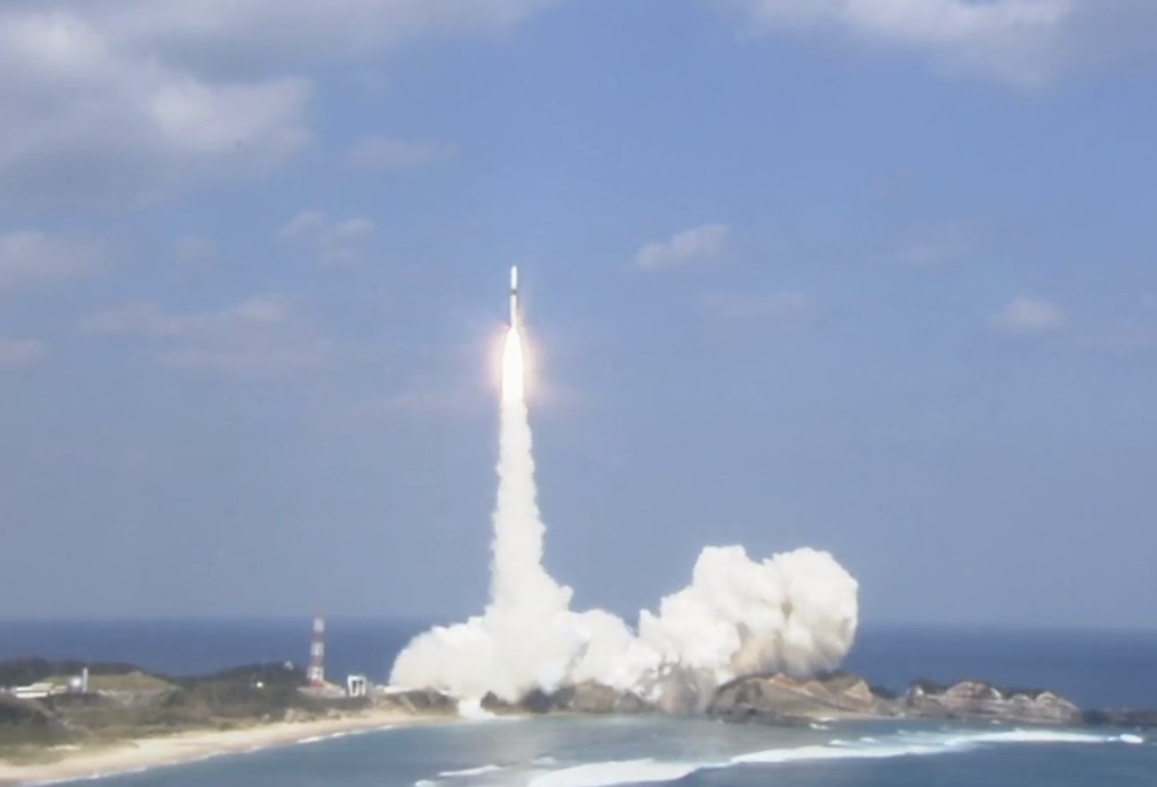 Japan launched a satellite to monitor greenhouse gases in the Earth’s atmosphere on Monday. The GOSAT-2 spacecraft lifted off aboard an H-IIA rocket during a twelve-minute window opening at 13:08 local time (04:08 UTC).

GOSAT-2, which will be named Ibuki 2 in space, is a successor to the Ibuki satellite that was launched in 2009. GOSAT-2 will continue Ibuki’s mission of recording long-term measurements of greenhouse gas levels in the Earth’s atmosphere – contributing to research into climate change and helping scientists to predict future changes with increased certainty.

Enhancements to the satellite over its predecessor will also allow it to improve models of ecosystems and sources of emission – such as forest fires and the oceans. A new objective for GOSAT-2 will be to study how humans and changes in the climate have affected the carbon cycle on a subcontinental scale. The data collected by GOSAT-2 will help drive the Japanese Government’s policies on climate change, as well as influencing the international community.

GOSAT-2 will monitor greenhouse gases from a circular sun-synchronous orbit at an altitude of 613 kilometers (381 miles, 331 nautical miles) and inclination of 97.84 degrees, revisiting each point of observation every three days. Like its predecessor GOSAT-2 will observe levels of carbon dioxide, methane, ozone and water vapor in the atmosphere. However, it will also monitor carbon monoxide and nitrogen dioxide levels. 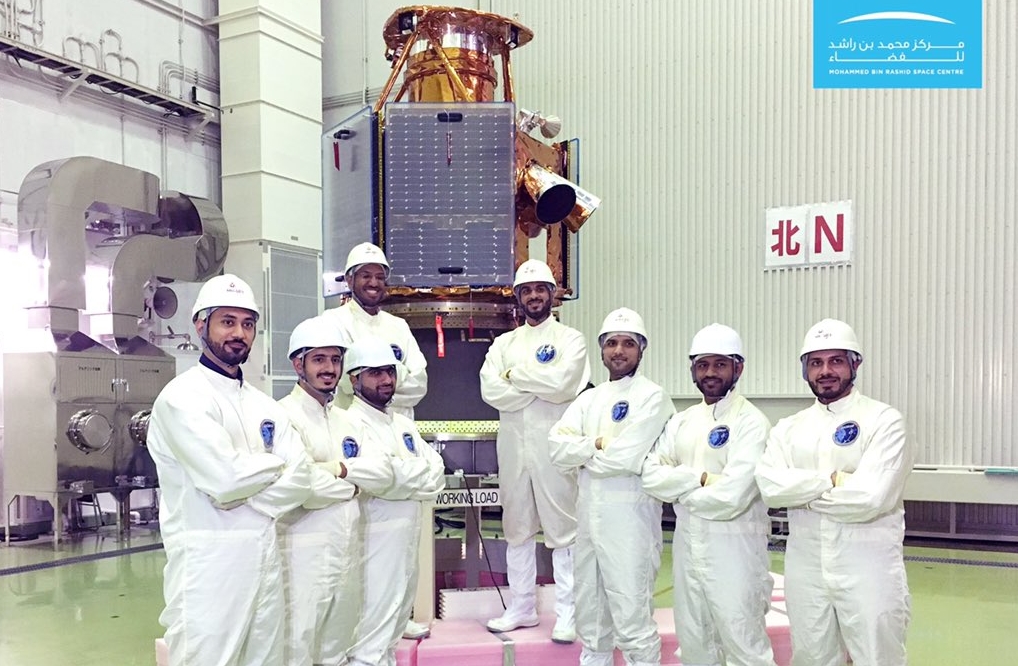 The original GOSAT, which was named Ibuki after reaching orbit, launched atop an H-IIA on 23 January 2009. Designed for a five-year mission, Ibuki continues to gather data as it approaches its tenth anniversary in orbit. GOSAT-2 will be able to detect carbon dioxide concentrations to 0.5 parts per million and methane concentrations to 5 parts per billion, as opposed to 4 parts per million and 34 parts per billion with the older satellite.

GOSAT-2 carries a two-instrument suite, Thermal and Near-infrared Sensor for Carbon Observation – or TANSO. This consists of a Fourier transform spectrometer (TANSO-FTS-2) and a cloud and aerosol imager (TANSO-CAI-2). TANSO-FTS-2 is the primary instrument, allowing the satellite to record the concentration of each greenhouse gas within the atmosphere. Built by Harris Corporation, the instrument incorporates an Intelligent Pointing system to detect clouds within its line of sight and to determine areas without clouds that will yield more usable data.

GOSAT-2 was constructed by Mitsubishi Electric (MELCO). It is a 1,800 kilogram (3,970 lb) spacecraft with twin solar arrays generating five kilowatts of power. GOSAT-2 has a design lifespan of five years.

GOSAT-2 was joined by several smaller satellites for the journey into orbit. The largest of these is KhalifaSat, a 330 kilogram (728-pound) earth observation satellite for the United Arab Emirates. Built in partnership between the Emirates Institution for Advanced Science and Technology (EIAST) and South Korea’s SATREC Initiative, KhalifaSat is based on SATREC’s SI-300 platform and is expected to operate for five years. The satellite was known as DubaiSat-3 early in its development and is an upgraded version of DubaiSat-2, which was launched by a Dnepr rocket in 2013. 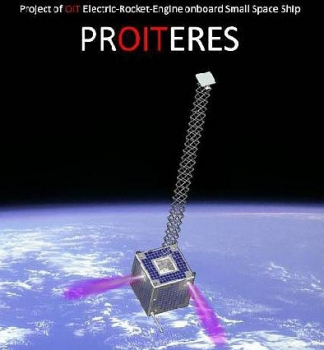 The satellite, which is three-axis stabilized through a gravity boom and magnetorquers will demonstrate electric propulsion for small satellites via miniaturized ion thrusters, as well as conducting experiments to study how radio signals propagate, testing communications systems and imaging the Earth via a high-resolution camera.

It is a follow-up to the original PROITERES, which was launched in 2012 and completed its mission successfully, despite communications problems in the days following its launch. A third PROITERES mission, to be launched at a later date, will attempt to use ion propulsion to reach the Moon.

There is a question mark surrounding this payload actually being on board the H-IIA launch.

Diwata-2B is a 55.9-kilogram (123 lb) satellite that was built, and will be operated, by PHL-Microsat of the Philippines. Diwata is equipped with a suite of imaging payloads to monitor agriculture and vegetation, weather, natural disasters and other areas of interest such as landmarks and heritage sites. In addition to these instruments, Diwata-2B carries an amateur radio payload to promote public interest in the mission, and amateur radio in general. 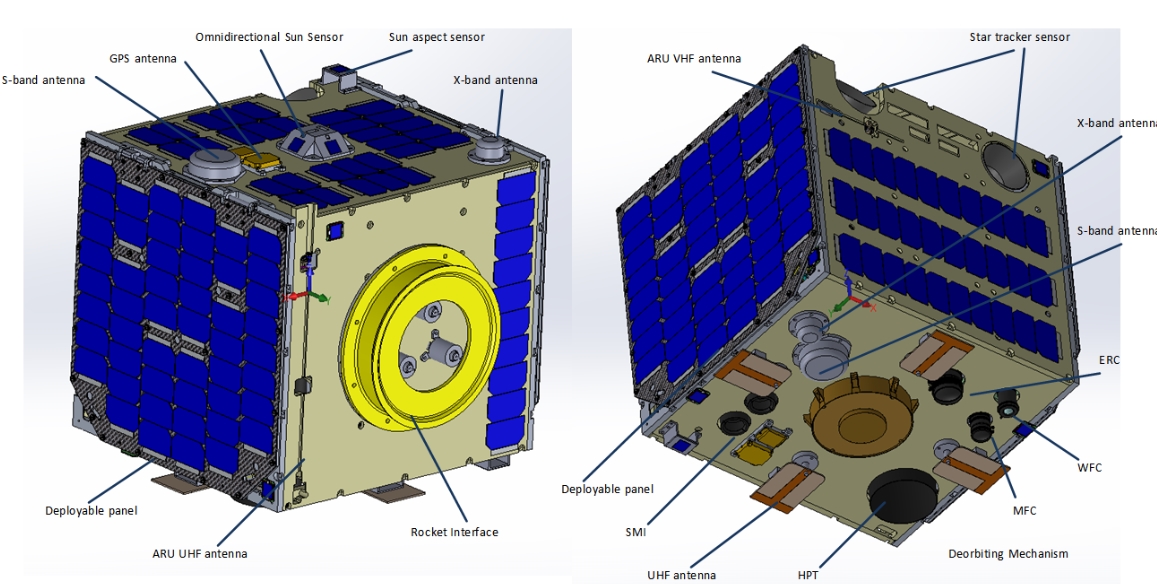 The Kyushu Institute of Technology’s Tenkou satellite will be used to study how exposure to space affects materials which may be incorporated into future spacecraft. Also equipped with a radio payload, the 23-kilogram (51-pound) satellite has an unusual polyhedral shape.

Two single-unit CubeSats are also among the payloads for Monday’s launch. These satellites are cubic in shape, with sides of 10 centimeters (3.9 inches). Shizuoka University’s Stars – Astronomical Observations (Stars-AO) will demonstrate the use of a miniaturized satellite for astronomy, while the Aichi University of Technology’s AUTcube-2 will be used for a series of radio and optical communications experiments.

Mitsubishi Heavy Industries H-IIA, Japan’s workhorse rocket, was used to delivery GOSAT-2 and its co-passengers into orbit. The H-IIA, which first flew in August 2001, was making its fortieth flight. 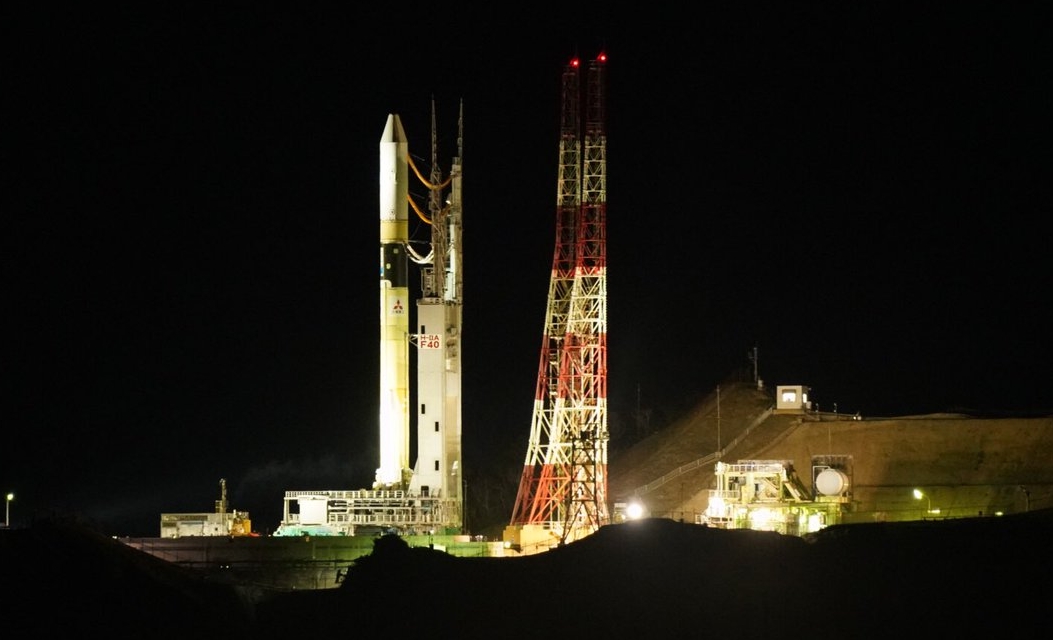 A two-stage rocket, H-IIA flew in its 202 configuration, which uses a pair of SRB-A3 solid rocket motors to augment its first stage at liftoff. The 202 is the lightest version of H-IIA – the alternative 204 configuration uses four SRB-A3 motors, while two intermediate versions of the rocket using a mixture of SRB-A and Castor-4AXL motors were retired in 2008. Monday’s launch has flight number F40.

The mission launched from the first pad at JAXA’s Yoshinobu Launch Complex, part of the Tanegashima Space Centre. This launch pad was originally constructed for the H-II rocket in the 1990s and has been used for all of the H-IIA’s launches. The Yoshinobu complex includes two launch pads, the second of which was originally built as a backup for the H-IIA but is used instead for H-IIB launches.

H-IIA uses cryogenic propellants – liquid hydrogen oxidized by liquid oxygen – in both its first and second stages. The first stage is powered by an LE-7A engine, which ignited two to three seconds before the planned liftoff time – termed X-0 for Japanese launches. Once the X-0 mark is reached, the SRB-A3 motors ignited and H-IIA F40 began its climb towards orbit. The SRB-A3 motors burned for the first 108 seconds of flight before burning out, separating eighteen seconds later.

The upper section of H-IIA’s payload fairing separated from the rocket during first stage flight – about four minutes and twenty seconds after launch. For Monday’s mission, H-IIA was equipped with a 4/4D-LC type fairing, with upper and lower sections to accommodate multiple satellites. GOSAT-2 was in the upper position, while KhalifaSat and the smaller payloads were located in the lower berth. When the upper section separated, H-IIA was at an altitude of approximately 131 kilometers (81 miles, 71 nautical miles), and the fairing was no longer be needed to protect GOSAT-2 from Earth’s atmosphere.

The first stage continued to burn for the first six minutes and thirty-eight seconds of the launch, carrying the second stage and payload to an altitude of 271 kilometers (168 miles, 146 nautical miles) and a velocity of 3.4 kilometers per second (2.1 miles per second, 7,600 miles per hour). The spent stage was discarded eight seconds after burnout, with the second stage beginning its burn nine seconds after separation. 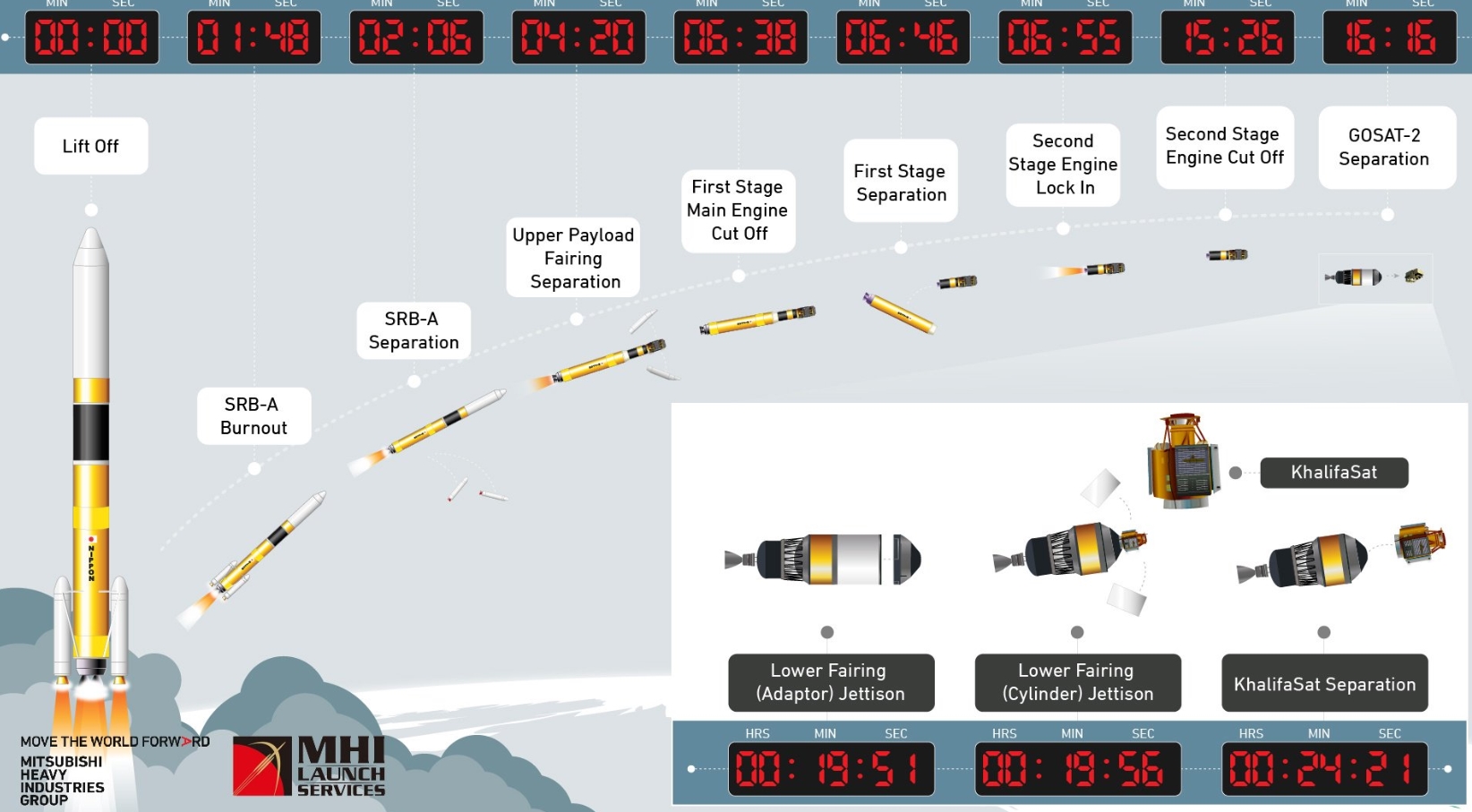 The flight profile for this mission – via JAXA

H-IIA’s second stage is powered by an LE-5B engine. While this is restartable, but was only be called upon to make one burn during Monday’s launch. This lasted for eight minutes and 31 seconds, placing GOSAT-2 directly into its initial orbit. The satellite separated fifty seconds after the end of the second stage burn.

After GOSAT-2 separated, the second stage reoriented itself to separate the remaining parts of the payload fairing. The dual-payload adaptor was jettisoned three minutes and 35 seconds after GOSAT’s separation, with the lower section of the fairing separating five seconds later. KhalifaSat was deployed after four minutes and twenty-five seconds, giving the stage time to reorient again beforehand.

The remaining satellites separated over the next half hour. Tenkou separated eight minutes and 59 seconds after KhalifaSat, with PROITERES-2, Diwata-2B and Stars-AO following at five-minute intervals. AUTcube-2 was the final payload to separate from H-IIA F40, deploying at fifty-one minutes mission elapsed time, two minutes and 40 seconds after Stars-AO.

Monday’s launch was the sixth and last of 2018 for Japan – and the third flight of the year for H-IIA. Japan began 2018 with the launch of ASNARO-2 aboard an Epsilon rocket in January, while February saw an experimental three-stage version of the SS-520 sounding rocket place a single CubeSat, TRICOM-1R, into orbit. H-IIA missions in February and June deployed reconnaissance satellites for the Information Gathering Satellite (IGS) constellation, while last month the more powerful H-IIB launched the Kounotori 7 resupply craft to the International Space Station.

Japan’s next launch is expected to be that of an Epsilon rocket in the first quarter of 2019, carrying the RAPIS-1 technology demonstration satellite.