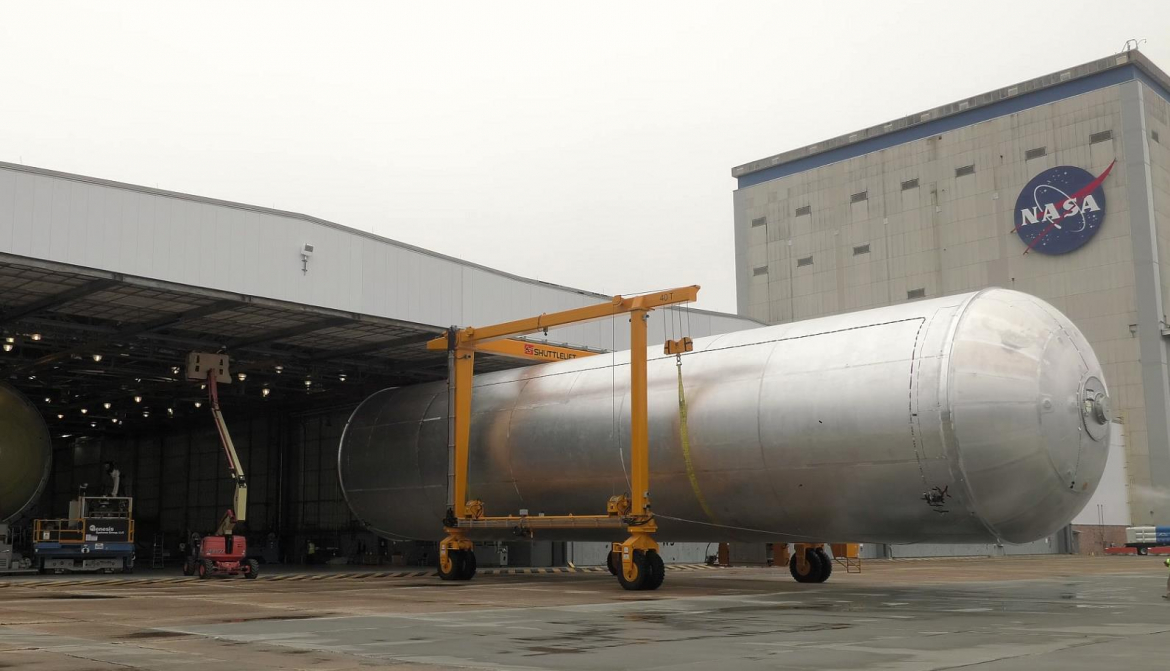 Following NASA’s Office of Inspector General (OIG) releasing a report on October 10 of their audit of the agency’s management of the Space Launch System (SLS) Stages contract, NASA has reacted by confirming they have already taken measures to assure that there is not a stoppage of work on the SLS Stages. The OIG concluded that the cost of the work under the development contract with Boeing was likely to be much higher than its existing value and that it was unlikely that NASA will meet the end of its current target window for the first SLS launch on Exploration Mission-1 (EM-1).

The report also noted that existing contract only covers the stages for two SLS Block 1 vehicles, adding that there is no stage on contract yet for one of the two recently rescheduled launches.

The OIG report noted that the full value of the existing contract could be reached by early next year, as the pace of milestones to complete the first Core Stage needs to increase.

Stages prime contractor Boeing hopes to complete outfitting the individual sections of the first Core Stage by the end of the year, with final assembly of the stage in the first half of 2019. By the IG Office’s estimate of Boeing’s run rate, the full value of the existing contract will have already been paid before work reaches the final assembly phase.

OIG noted that the SLS Program has used some program reserves to help this fiscal year, but it’s likely the existing contract will need to be renegotiated again and OIG recommended both a renegotiation and specific contract terms.

Bill Gerstenmaier, NASA Associate Administrator for the Human Exploration and Operations Directorate (HEOMD), wrote in a response included in the report: “This recommendation will be satisfied, to the extend practicable, by contract restructure, which includes the appropriate approvals by Boeing management and NASA officials.” 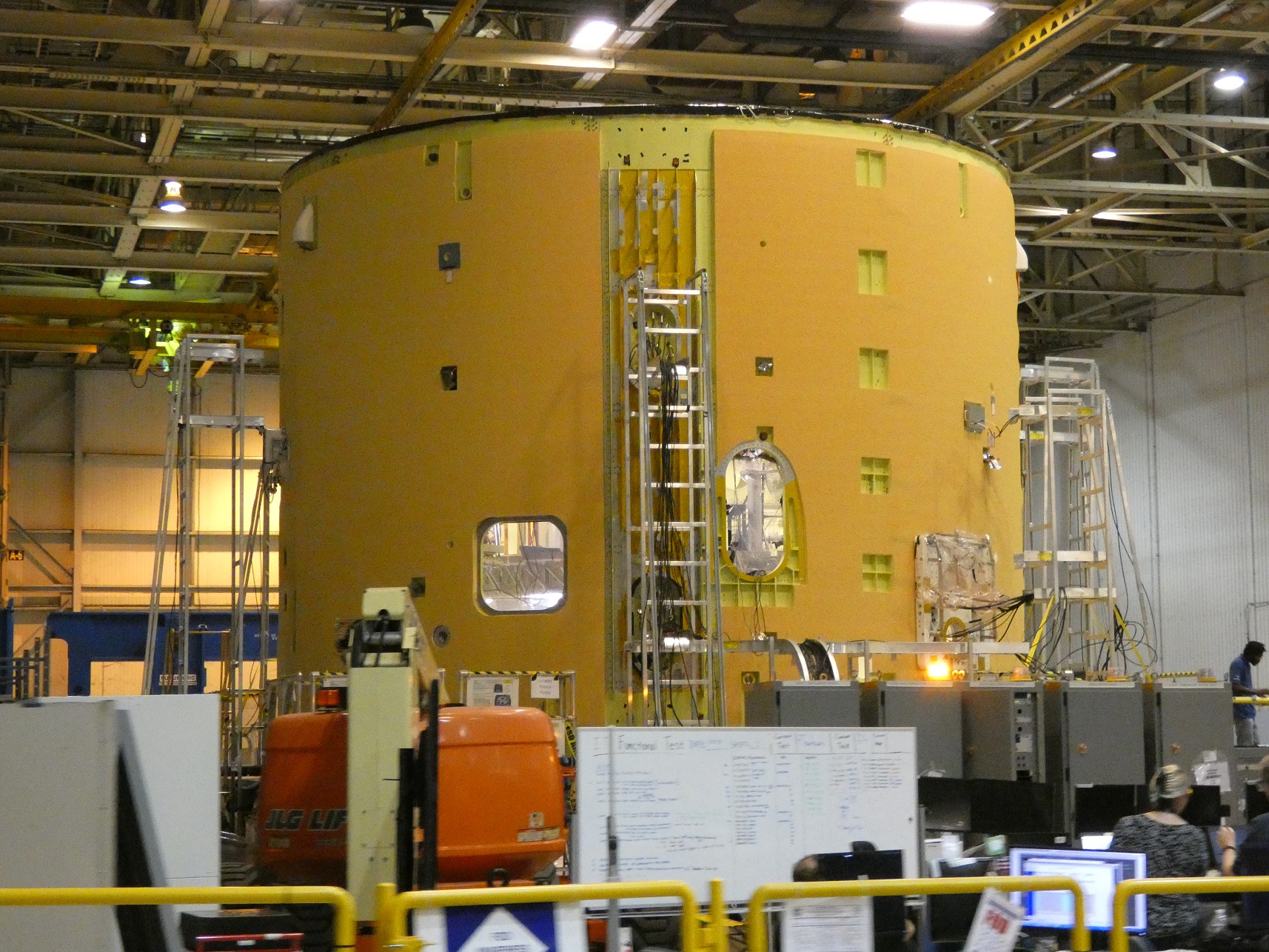 The intertank of the first Core Stage at Michoud Assembly Facility during functional testing in August, 2018. Credit: Philip Sloss for NSF/L2.

“NASA has already taken measures to assure that there is not a stoppage of work on the SLS Stages,” NASA spokesperson Kathryn Hambleton added in an email. “These measures include issuance of an Undefinitized Contract Action (UCA) to continue performance until we can get a new delivery schedule negotiated and definitized.”

The current contract extends through the end of calendar year 2021 and calls for delivery of two SLS Core Stages and one Exploration Upper Stage (EUS) at a cost of $6.2 billion US. The OIG report concluded that the cost to complete production of the first Core Stage next year, take it through the Stage Green Run test campaign by the end next year, and then launch it in 2020 would overrun the full amount obligated through 2021.

Of the seven recommendations in the OIG report, NASA concurred with six of them, and the report noted that agency management had begun implementing some changes prior to this year’s audit. The OIG report estimates that work through the current contract period will ultimately cost $8.9 billion US.

The early flight manifest for SLS changed again in reaction to funding by the U.S. Congress of a second Mobile Launcher in late March; EUS was pushed back to the fourth SLS flight, with three launches now planned for the initial Block 1 vehicle. The change created a disconnect with the renegotiated work that included flying the first EUS under the current contract, but also created a shortage of contracted Block 1 stages.

SLS currently has only two Core Stages and one ICPS under contract to fly three Block 1 flights.

NASA is currently mandated to fly Europa Clipper on SLS by 2022 and a fully crew-capable Orion spacecraft is planned to be ready for the EM-2 mission in the same time frame; the most recent public schedule from the agency projected EM-2 flying in 2022 and Europa Clipper in 2023. 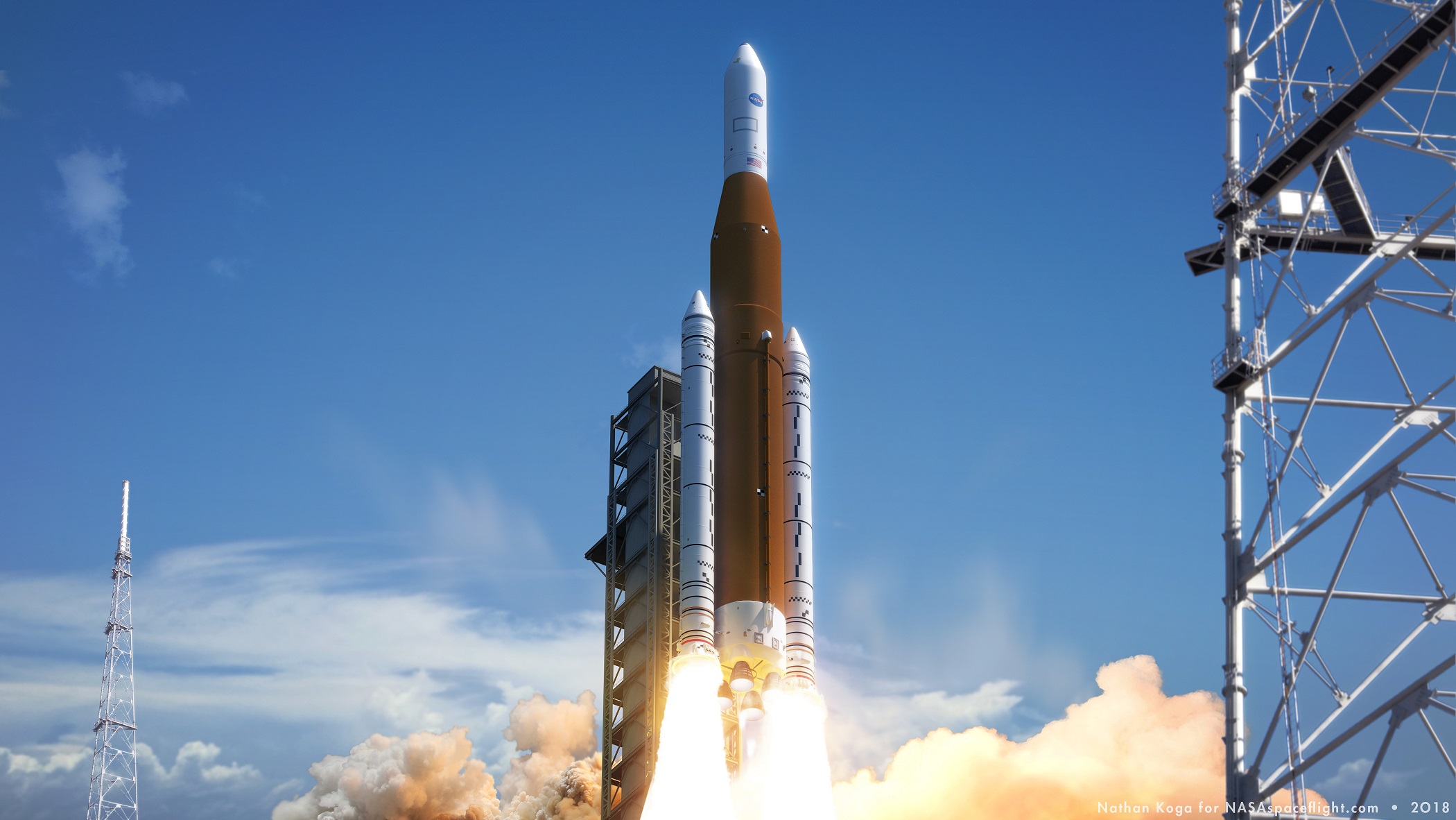 A Block 1 Cargo vehicle that could launch Europa Clipper to Jupiter on the second or third SLS flight. NASA does not yet have a third Core Stage under contract. Credit: Nathan Koga for NSF/L2.

There were signs that the process of procuring future stages under a more production-oriented contract had started early in the year; however, the OIG report says that “Due to NASA’s focus on overcoming the challenges associated with the current Boeing Stages contract and ensuring delivery of the first two Core Stages, the Agency has yet to implement an acquisition strategy for acquiring additional Core Stages beyond Core Stage 2.”

“NASA did not issue a solicitation for the ‘Stages Production and Evolution Contract’, merely a pre-solicitation notice,” Hambleton noted. “At this time, there is no further information available.”

Europa Clipper has short, infrequent launch windows; it can only be launched directly to Jupiter in a three week period the occurs every thirteen months, either in June 2022, to meet the current Congressional mandate or July 2023, if EM-2 flies first. The IG report notes that “NASA officials estimate requiring 52 months of lead time from issuing a contract to delivery, the earliest a third Core Stage can be produced is 2023, which may cause delays in missions expected to use the SLS rocket.”

Exploration Mission-1 (EM-1) was originally scheduled for December 2017. The most recent target window was for a launch between December 2019, and June 2020.

Issues with subsystem components were noted in early Spring and an internal assessment of the completion date for the Core Stage showed it to be closer to the middle of 2019 than the end of this year. With six months of scheduled work for the Green Run test campaign and six months of work planned at the Kennedy Space Center launch site, the launch readiness forecast already moved out to the middle of 2020.

There is little padding or schedule margin to account for additional issues, and the OIG writes that “in light of the Project’s development delays, we have concluded NASA will be unable to meet its EM-1 launch window currently scheduled between December 2019 and June 2020,” saying that “additional delays are likely as significant integration and testing activities — including the Green Run Test –in which technical issues are regularly found, have yet to occur.”

The OIG report outlined some of the technical issues in manufacturing the first flight article Core Stage that have contributed to the two and a half years of delays. Boeing is building SLS Core Stages at the Michoud Assembly Facility (MAF) in New Orleans, where Saturn rocket stages and Space Shuttle External Tanks were produced and assembled. 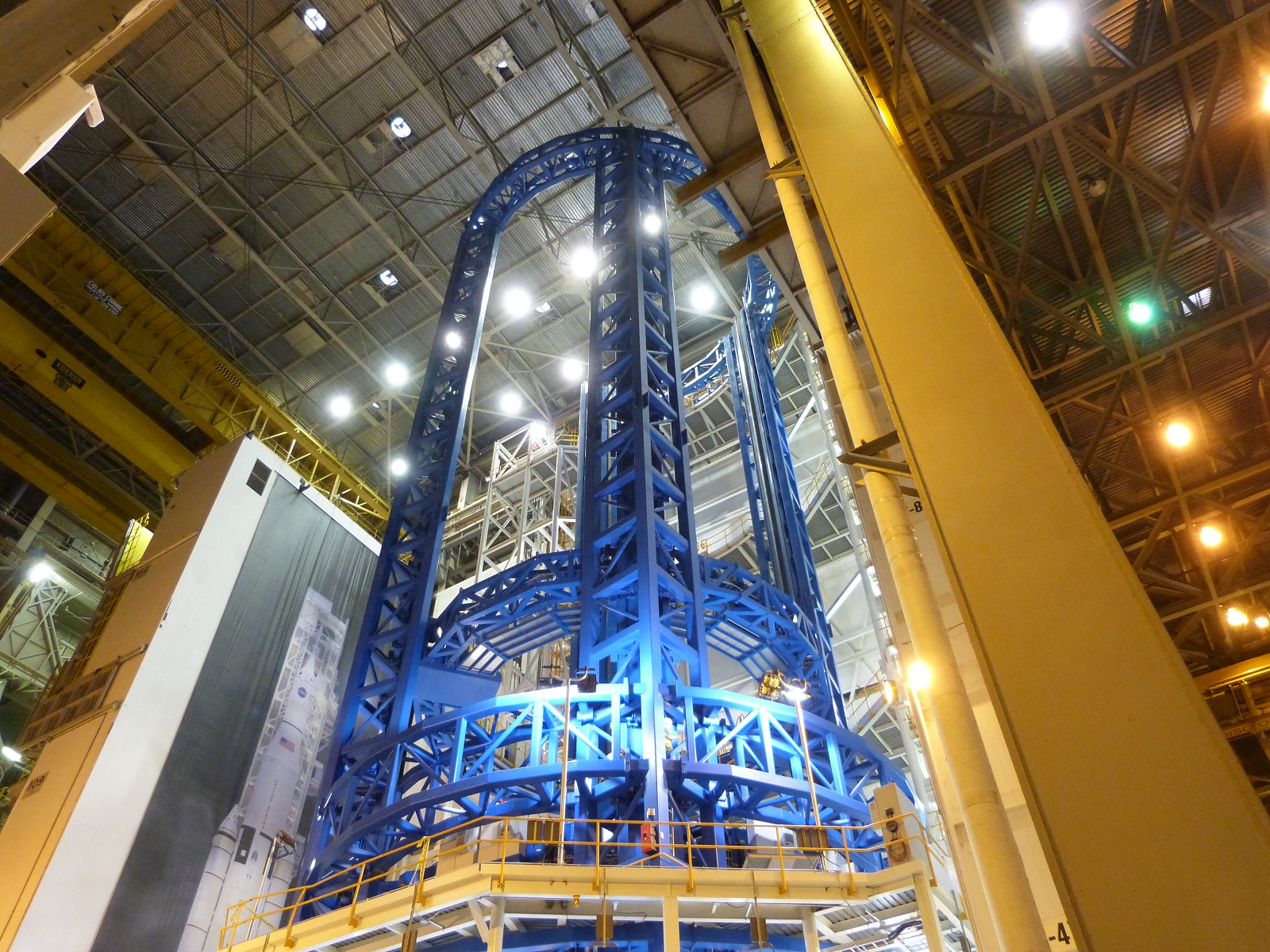 Vertical Assembly Center at MAF in August 2015, during activation. Misalignment issues were discovered after original completion the year before that caused months of rework. Credit: Philip Sloss for NSF/L2.

Designed and sized to existing Space Shuttle engines, the SLS Core Stage decomposes the Shuttle liquid propulsion elements, drawing on the back end of Shuttle orbiters and its external propellant tanks. The side-mounted Shuttle elements were stretched, bulked up, and redesigned as an inline rocket stage.

The Core Stage manufacturing infrastructure at MAF was largely rebuilt from the ground up, and issues constructing and activating the large Vertical Assembly Center welding tool delayed work verifying the new welding processes.

Additional delays occurred when problems cropped up late in development of the new weld processes. Some flight propellant tank hardware that had already been welded had to be set aside and replaced by second flight hardware.

A tornado struck MAF in early 2017 compounding difficulties during the recovery from the welding issues, but first time assembly, integration, and testing issues have caused more recent delays.

Atlas V 551 launches AEHF-4 for the US Air Force