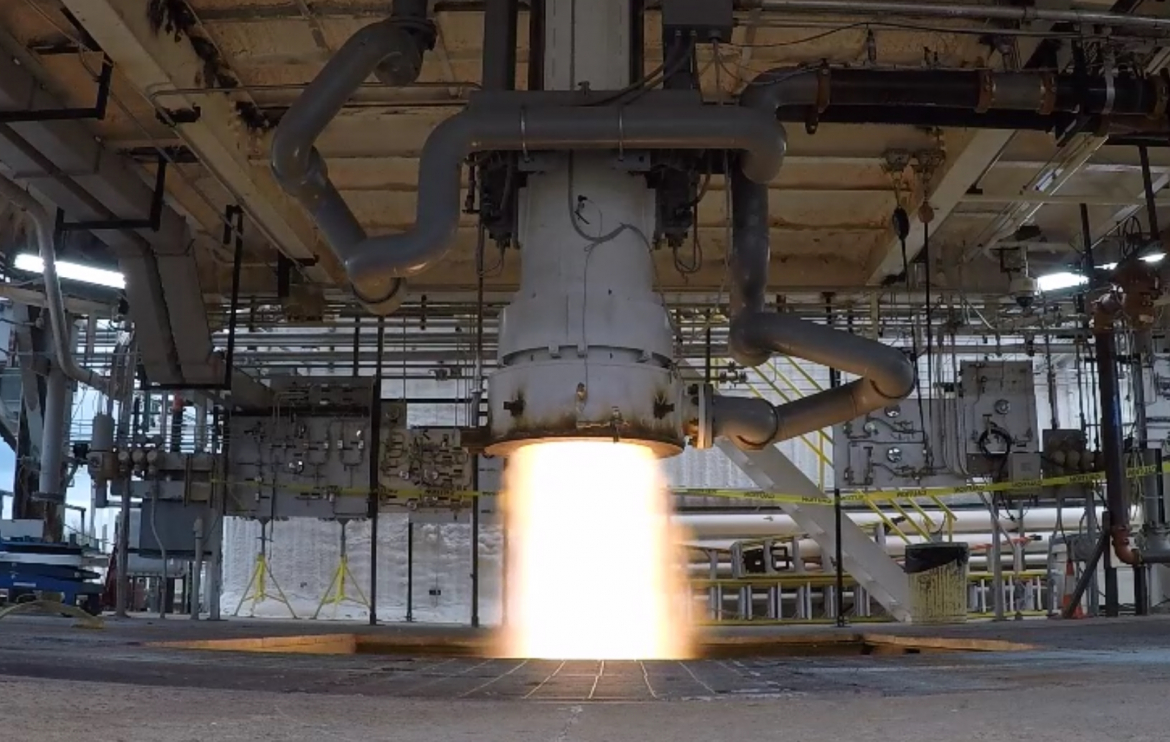 Testing of the Propulsion Qualification Module (PQM) for NASA’s Orion spacecraft resumed at the White Sands Test Facility in New Mexico in mid-October. The test team at White Sands conducted two hot-fire tests critical to shipping the first European Service Module (ESM) from its Bremen, Germany, production site to the Kennedy Space Center (KSC) in Florida some time next week.

The European Space Agency (ESA) chose the two tests to help verify the performance of the propulsion elements of the ESM, in particular active pressure regulation. Results of the tests were good, removing that constraint to ESM shipment.

The PQM, a “battleship” version of the ESM propulsion subsystem, will continue through dozens of tests across two test campaigns now and in the Spring next year.

“Those were identified by ESA and they wanted them executed prior to the shipment,” Jim Withrow with NASA’s Glenn Research Center said. Withrow is the PQM Project Manager for the European Integration Office (EIO) at NASA Glenn.

“ESA considered that the highest risk test that needed to be demonstrated, that twenty-second test. And they considered that a constraint to shipment of ESM to Kennedy, so we got that off and it went really well.”

The ESM provides Orion with the capability to fly long-duration missions, including storage of consumables, power generation, and in-space maneuvering. It will fly for the first time on the next Orion mission, Exploration Mission-1 (EM-1), a multi-week flight into and out of a Lunar Distant Retrograde Orbit (DRO).

Built by Airbus DS for ESA, the ESM has three types of engines: twenty-four reaction control system (RCS) thrusters primarily for attitude control, eight auxiliary engines for translational maneuvers, and OMS-E for large translational burns. The PQM has the same set of engines except that it only has twelve RCS thrusters, omitting one of the twelve-thruster RCS “strings.”

Hot-fire testing resumed in Test Stand 301 at White Sands with the full integration of Pressure Control Assemblies (PCA) into the test module. “The supplier of the valves on the PCAs themselves had some challenges to work through before they were delivered for integration into the PCA,” Withrow said.

“Our management team at NASA and ESA chose to prioritize the parts for integration into FM-1 PCAs over the PQM PCAs and that really helped the overall ESM delivery schedule and still was able to complete the two critical tests required by PQM before ESM shipment.”

Images from video of the first “Step 1a” PQM test on October 13. The wide shot from one of the closed-circuit video cameras provides some perspective on the length of the diffuser positioned under the OMS-E engine. Credit: NASA.

Overall PQM testing is divided into two steps, Step 1 and Step 2. The two OMS-E tests from within Step 1 required for ESM shipment were moved forward and called Step 1a.

“Both of those tests used the OMS-E and they went exceptionally well,” Withrow said. “They met all of the test objectives that we’re after. They demonstrated that the PCA active control was right on the money, and that was the biggest risk that we were trying to mitigate prior to the shipment of the ESM.”

“It used sufficient propellant so we saw the PCA actively doing its job,” Withrow said of the twenty-second test. “There’s two parts to managing the pressure in the prop tanks.”

“The first one is we call it a PRU, a pressure regulating unit, and it is an electronic controller and it controls the second part of the system that we call the PCA or pressure control assembly and that is the fluidic control hardware and that actually manages the prop tank pressures,” he explained. “And that went exceptionally well.” 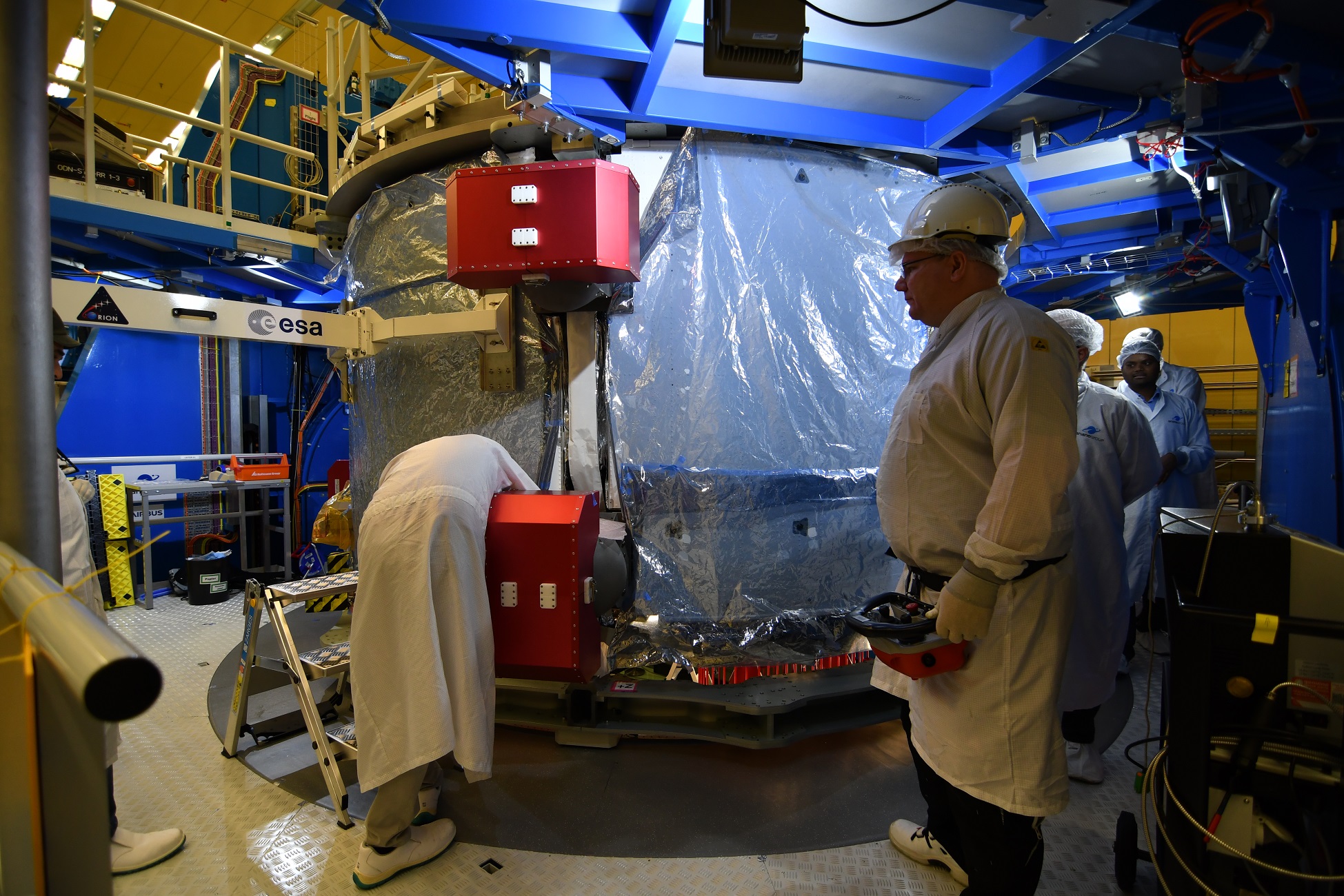 FM-1 has completed functional testing at its Assembly, Integration, and Testing (AIT) Airbus facility in Bremen. One of the last hardware installations was the radiators around the outside of the module, which was completed in September.

A pre-ship review in Bremen is planned for the last week of October, with the shipping flight to Florida the following week. “Airbus has looked at the data that was collected over the first two firings that we’ve had this month and they have done an analysis to characterize the performance of the system and to satisfy the desire for ESA to show that the PCAs work and they were able to do that and provide that data for the pre-ship review,” Withrow noted.

In parallel with the final assembly of the EM-1 Orion vehicle in Florida, the test team at White Sands will first running the test cases in Step 1. “From the original planning of PQM testing we had two steps,” Whitrow said.

“The primary difference consisted of how the propellants were conditioned for use. Step 1 uses unsaturated propellants and Step 2 uses saturated propellants, so we’ve been sticking with those two steps. We did add a blowdown test, those tests were added as I’m going to call it a precursor to Step 1.”

One of the primary objectives of test campaign is to delta qualify the OMS-E. Although the engines were used successfully throughout thirty years of Shuttle flight operations, Orion has a different flight envelope. 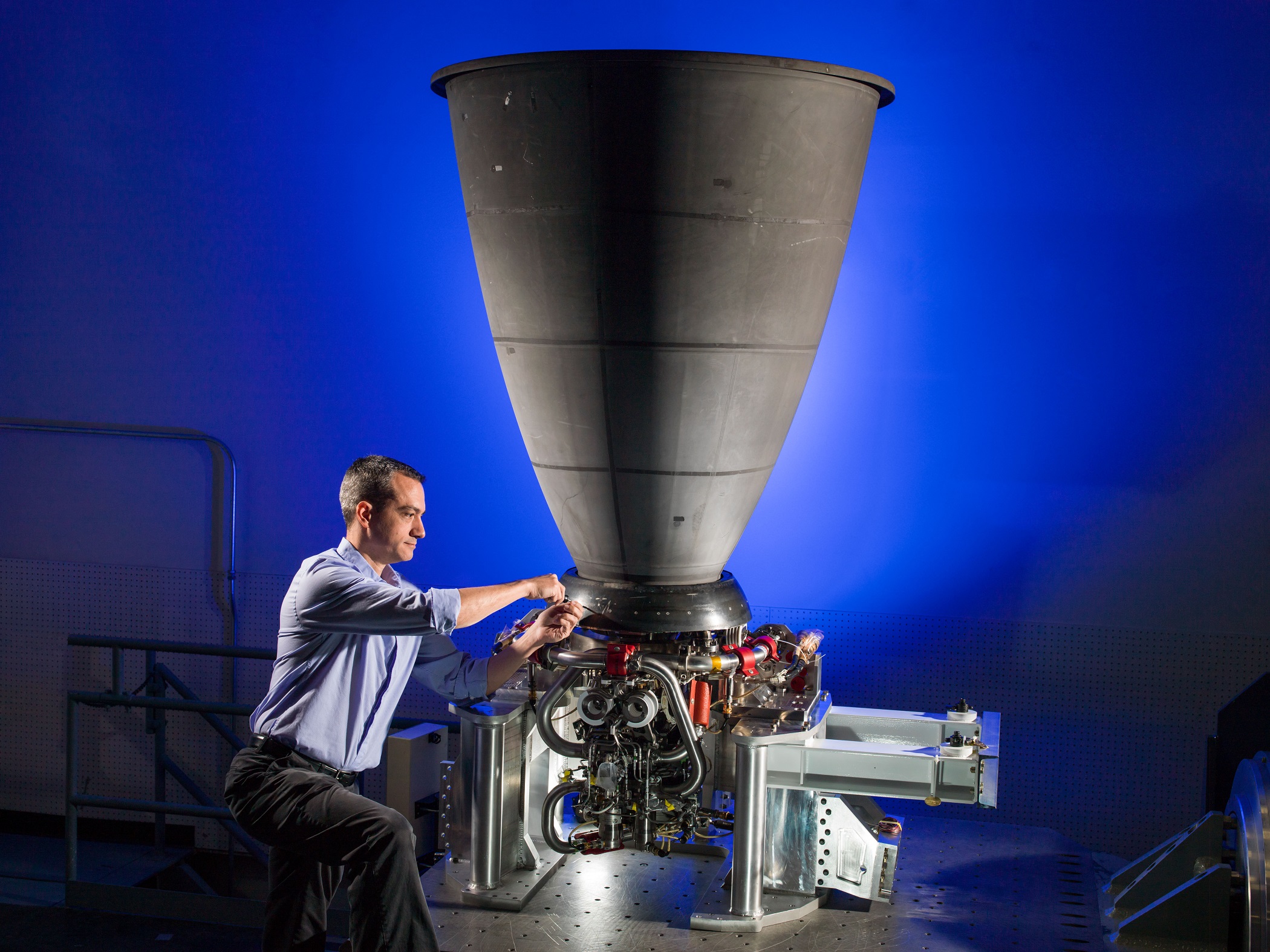 “Our operational envelope for OMS is larger than the Shuttle used for OMS,” Whitrow explained. “We know it went through some qualification tests to get used for Shuttle and we know what those are.”

“We are going to be operating within that original qualification envelope that Aerojet subjected that engine too, but they’re outside of the bounds of what Shuttle used, so we have some delta qual tests that we want to conduct inside a representative propulsion system for the ESM.”

Whitrow said Step 1 will continue with OMS-E tests before the campaign comes back to testing the Auxiliary and RCS engines. “The Step 1a designation was really set up by ESA. Those are the two tests that they said they wanted to accomplish before they ship the ESM.”

“The remaining tests we just call Step 1 and those will encompass the OMS delta qual, the Aux acceptance, and then are a number of crosstalk tests we conduct between the RCS and the Aux. So that’s kind of the balance of Step 1.” 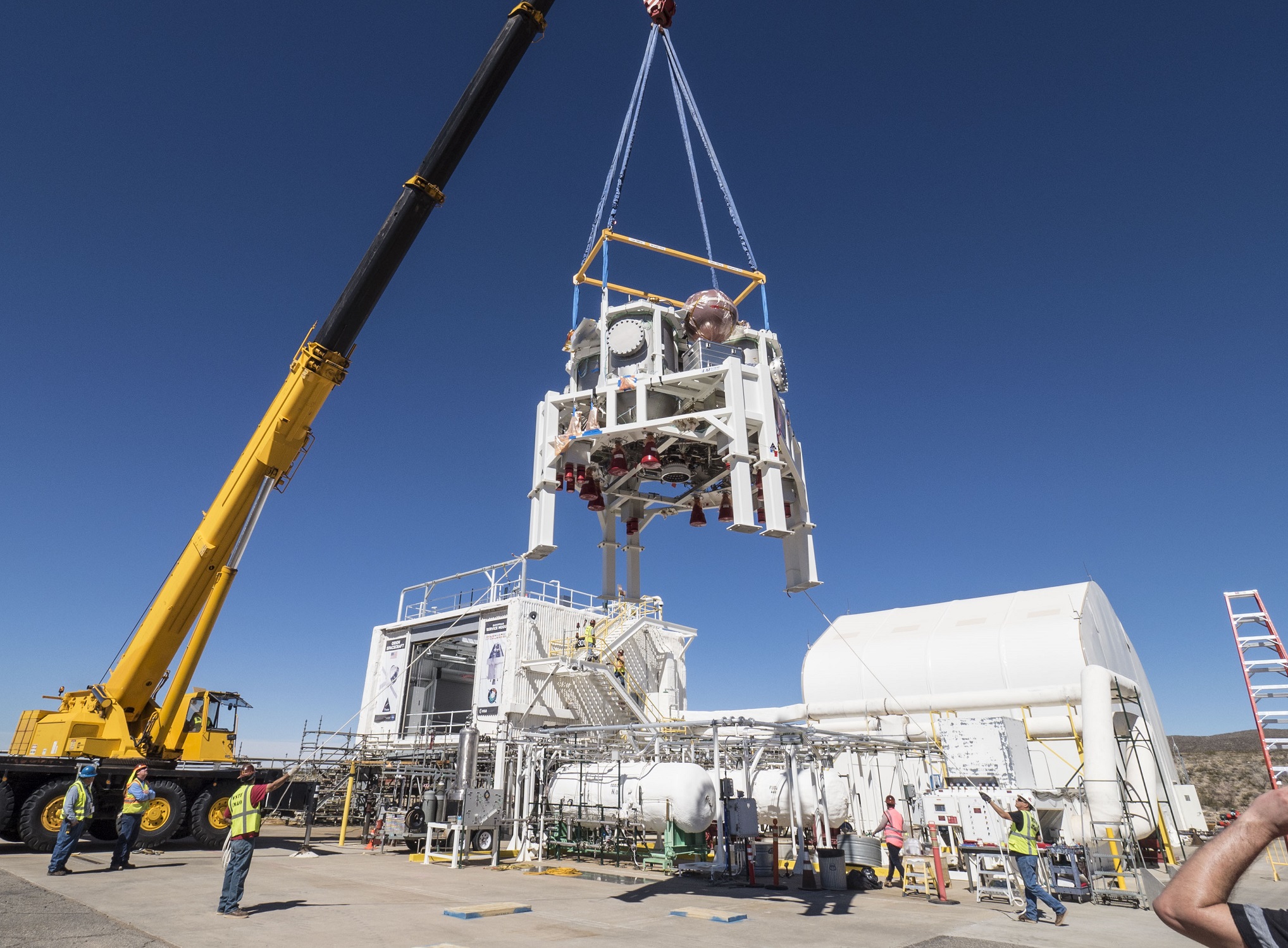 Following arrival at White Sands and installation of the OMS-E engine, the PQM and support hardware is lifted into Test Stand 301 in early 2017. Credit: NASA/Radislav Sinyak.

“Overall for the Step 1 tests we’ve completed two of seventeen,” he added. “Two of the twelve tests are behind us, the other ten tests are going to be using just the OMS engine and the Aux engines. We have five tests that have to use RCS and those will pick up after we’ve completed those twelve.”

The test cases will be looking to collect data on how the system performs at the corners and edges of Orion’s operational envelope. “The test sequences are similar to flight like scenarios in some cases and they’re formatted to stress the system with what we’re calling worst-case scenarios and verify the propellant subsystem,” Whitrow explained.

“The easy cases are not really what we’re after when we’re doing this verification, we’re trying to push the envelope and get to the corners of the boxes that we need to verify.”

The PQM is a “battleship” propulsion test article, with a “beefier” structure and tankage than flight articles. “The overall test campaign that we’re doing with PQM focuses on validating the pressurization function and hot-fire operations,” Withrow explained.

“For single engine firings we’ve got a lot of data from vendors themselves on the manufacturers of the RCS and Aux engines, they have data on the performance of those, but once you put it into the overall system, we’re trying to understand and anchor the fluidic models for the whole prop system. And so we’ve gotten some really good data in the firings we’ve had to date.”

Images of PQM blowdown testing in August, 2017. One of the Auxiliary engines fires in the left image; exhaust exiting the diffuser during an OMS-E firing on the right. Credit: NASA.

“Even in blowdown — blowdown gave us a lot of good data and the two OMS tests we’ve had has certainly given us some really good data, too.”

Blowdown testing was conducted in August, 2017, while waiting for the PCA regulator hardware to arrive. “Those tests were where we used larger quantities of ullage and lower levels of propellants, so you had no pressure regulation during that time, so no active control of the propellant tank pressures,” Whitrow explained. “We set the initial prop tank pressures with the facility ground support equipment.”

“We didn’t have any of that during blowdown, we just used the ullage to try to maintain the pressure of feeding the propellants to the thrusters themselves. We really didn’t use large quantities of propellants during that period when we were doing blowdown testing.”

“When we were conducting those tests, we had all three types of engines running, we had crosstalk between the subelements, we had data collected there and some of those tests we don’t plan to reconduct in Step 1 or Step 2,” he added. “So we don’t plan to do any blowdown tests for the remainder of the PQM testing.”

The Step 2 campaign is planned to begin next Spring using saturated propellant that more closely simulates conditions at the end of a long-duration mission. In Step 1 the propellant is unsaturated as it would be at the beginning of the mission when the propellant tanks are full.

“In flight, you will have an order of maybe three weeks or maybe even longer where you’re going to have this pressurant gas sitting over top of and keeping the prop tanks pressured and what will happen is that gas will diffuse into your propellant,” Whitrow explained. “It takes weeks to occur and once that occurs your performance of the engine will change and the way the system responds will change.”

The Step 2 tests will use propellant that is saturated with the gas that pressurizes the propellant tanks. “When you’re mixing your propellants and you’re expanding that and pushing it into a combustion chamber you can imagine that gas is coming out of solution very quickly — just as like when you open a carbonated water bottle, you see the bubbles immediately appear,” he noted. 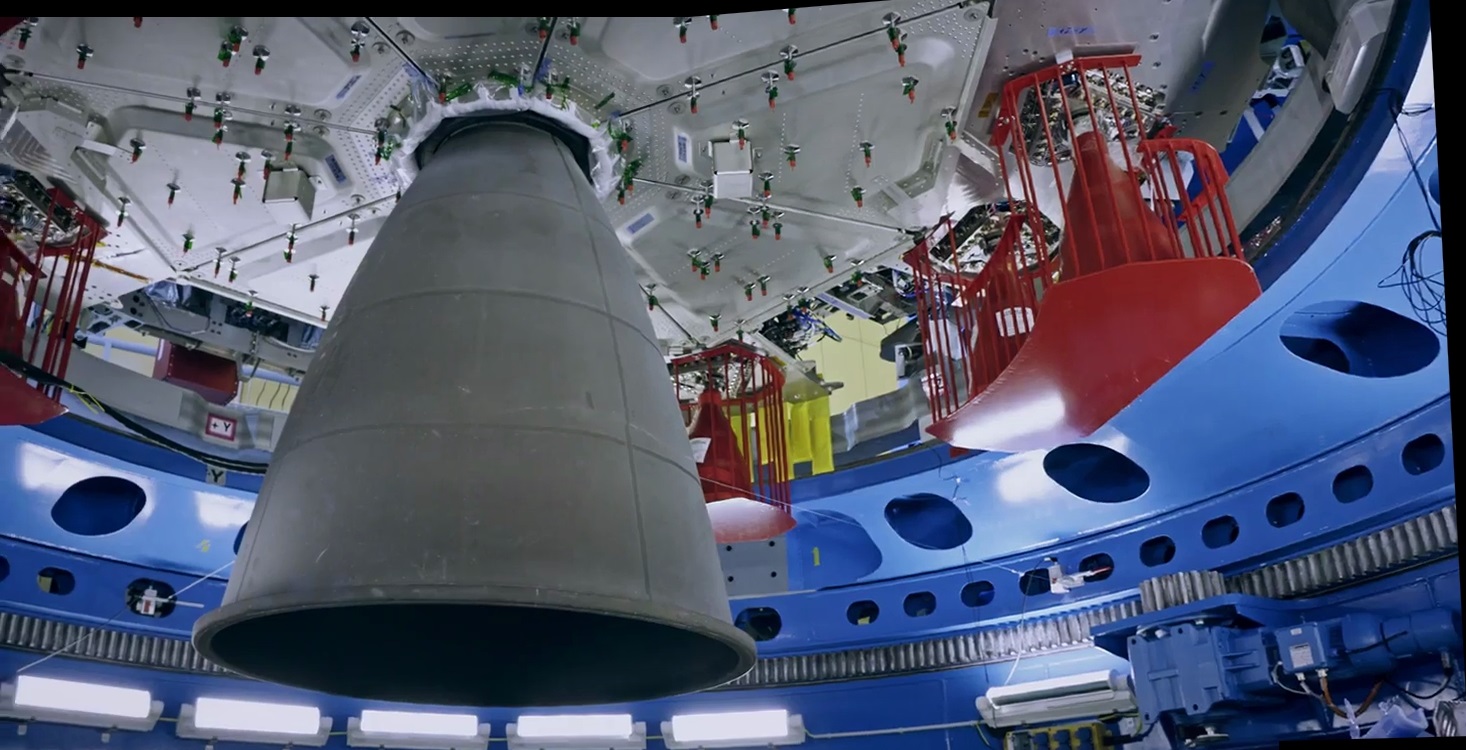 Many of the tests conducted during Step 1 will be repeated in Step 2. “We have a number of tests that we want to conduct in Step 1 with unsaturated propellants and then we repeat those same tests in Step 2 with saturated propellants,” he said. “So really we can only do half of the OMS delta qual with Step 1, the other half is in Step 2.”

There are additional tests planned in Step 2 to look at contingency cases, future flights, and to gather additional engineering data.

A couple of the additional tests planned for Step 2 include contingency cases that require long burns of Orion’s engines. “One of them is an Abort To Orbit or ATO, that’s going to be using OMS-E and the Aux engines. I know that there’s a Trans Earth Injection (TEI) test that uses I believe the primary engines are the Aux engines with some RCS firing in there.”

An ATO abort would cover launch vehicle failures during ascent that left Orion with too much speed for a splashdown abort in the Atlantic Ocean, but with marginal speed to make it to abort. Normally the upper stage of the launch vehicle handles the end of ascent and orbit insertion.

The ATO test case is currently looking at a 739 second duration hot-fire with 690 seconds of that using all three sets of engines — OMS-E, Aux, and RCS.

The TEI test case simulates a situation where the OMS-E engine can’t or won’t be used for one of the burns to get Orion out of lunar orbit and headed back to Earth. The four pairs of Auxiliary engines would have to make a long burn — in the test case firing with the RCS for 3635 seconds, just over an hour.