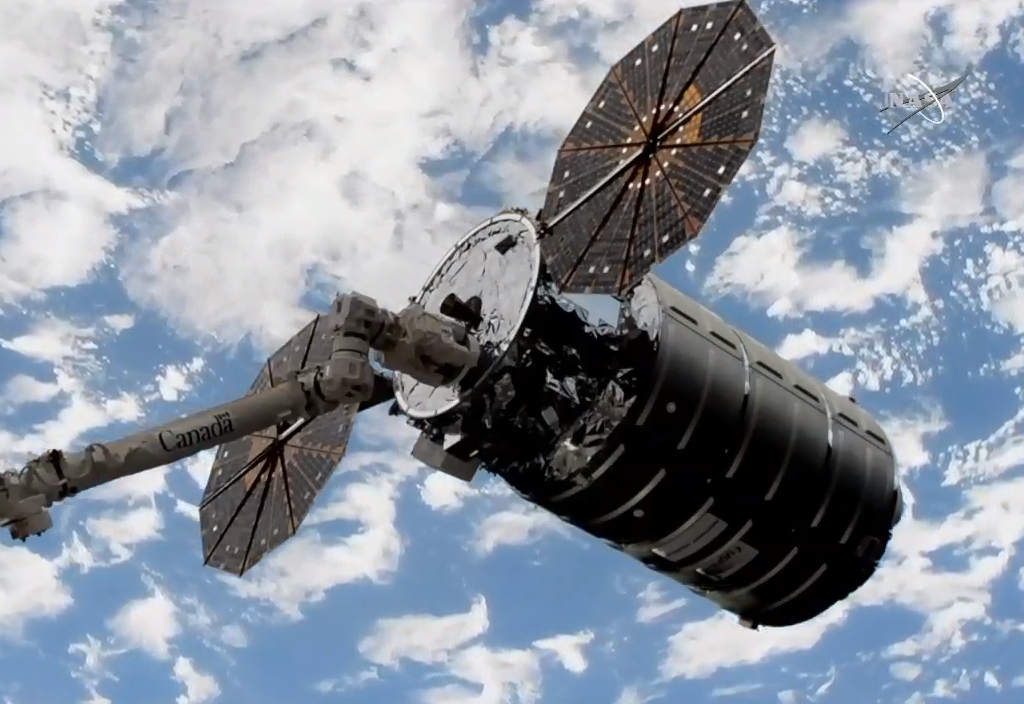 The NG-10 Antares and Cygnus – connection to Soyuz and Pegasus issues:

While Antares is not affected by issues with the company’s Pegasus rocket, Cygnus’ payload was, however, affected by last month’s crew Soyuz in-flight abort – with 11 CubeSats having to be removed from the Cygnus due to the realigned ISS vehicle launch schedule.

With its second and final flight of 2018 upon it, Antares lofted the S.S. John Young Cygnus up to the International Space Station with 3,268 kg (7,205 lb) of pressurized cargo and 82 kg (181 lb) of unpressurized cargo.

Launch on Saturday morning came after two weather delays from Thursday and Friday.  NGIS engineers completed final preparations for Antares’ liftoff ahead of coming “on console” at the Launch Control Center for final fueling operations.

Get a behind-the-scenes look at our #Antares rocket and #Cygnus spacecraft as we continue to prepare for tomorrow’s early morning launch to @Space_Station! The 5-minute lunch window will open at 4:01 am EST. #NorthropGrumman pic.twitter.com/Y9ju2f19du

Speaking in a one-on-one interview with NASASpaceflight’s Chris Gebhardt, Frank DeMauro, Vice President and General Manager of the Advanced Programs Division for Northrop Grumman Innovation Systems, said, “On Cygnus, we’re in really good shape.  We loaded the final bits of cargo on Sunday, then we closed the hatch and did all of our final closeouts.”

Kurt Eberly, Antares Deputy Program Manager for Northrop Grumman Innovation Systems, added that Antares’ final rehearsal went very well before the launcher rolled the mile down the road from its integration and checkout facility to the Launch Pad 0A at the Mid-Atlantic Regional Spaceport at Wallops.

Launch occurred at 04:01:22 EST (0901:22 UTC) at the opening of a 5-minute launch window timed to place Cygnus into the orbital phasing plane of the International Space Station at the moment its Castor 30XL solid propellant second stage cuts off and inserts Cygnus into orbit.

This was Northrop Grumman’s first launch of Antares since acquiring Orbital ATK in June of this year – and with actually be the company’s first orbital launch since the acquisition; Pegasus was originally to precede Antares in an orbital launch, but continued issues with that rocket’s fin actuator controller have taken the mission’s launch date to “TBD” status.

Given the large-scale cross utilization of avionics and systems across NGIS’s rocket fleet, NASASpaceflight asked NGIS’s Kurt Eberly if that commonality might prove troublesome for Antares.

The answer was a categorical “no.”

“There’s no sibling impact from Pegasus on this Antares launch because we don’t fly that same actuator controller unit,” noted Mr. Eberly.  “Pegasus does fly a lot of common avionics with our other vehicles, and we have a number of other programs that are flying the same avionics.  But the particular box in question is an actuator controller unit for Pegasus that controls the fin actuators. 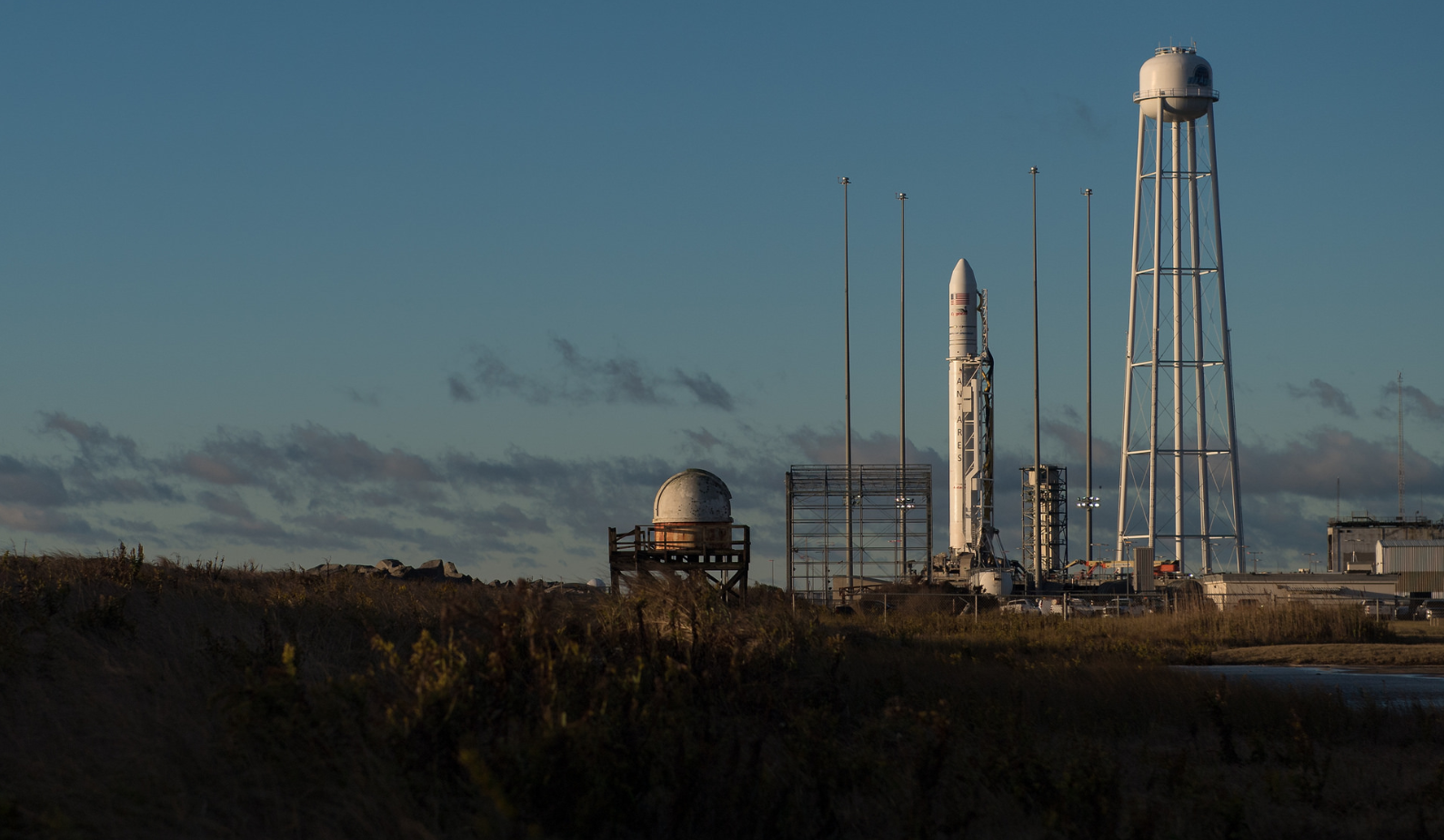 Antares, with the S.S. John Young Cygnus tucked inside its payload fairing, stand tall on Pad 0A at the Mid-Atlantic Regional Spaceport, Virginia. (Credit: NASA)

“There’s three fin actuators on Pegasus.  And there’s a control unit that’s an electro-mechanical control box.  We do not fly that on Antares, and I’m sure that Cygnus does not either.  There are other common avionics, flight computer, navigator, battery; there’s lots of commonality and that’s, I think, one of our strengths in the launch vehicles division – that we’re able to produce this common hardware.

“We get a lot of run time on it, a lot of flight history, a lot of flight experience with it, and we’re constantly improving it, and we have a real production line going in Chandler, Arizona, that’s cranking out this hardware and software to go with it.”

While Antares is not affected by the ongoing efforts to correct the Pegasus issue, the mission’s Cygnus spacecraft and its associated payload items both inside the craft’s pressurized compartment and with its exterior CubeSats were affected relatively late in the launch processing flow by last month’s crew Soyuz in-flight abort. 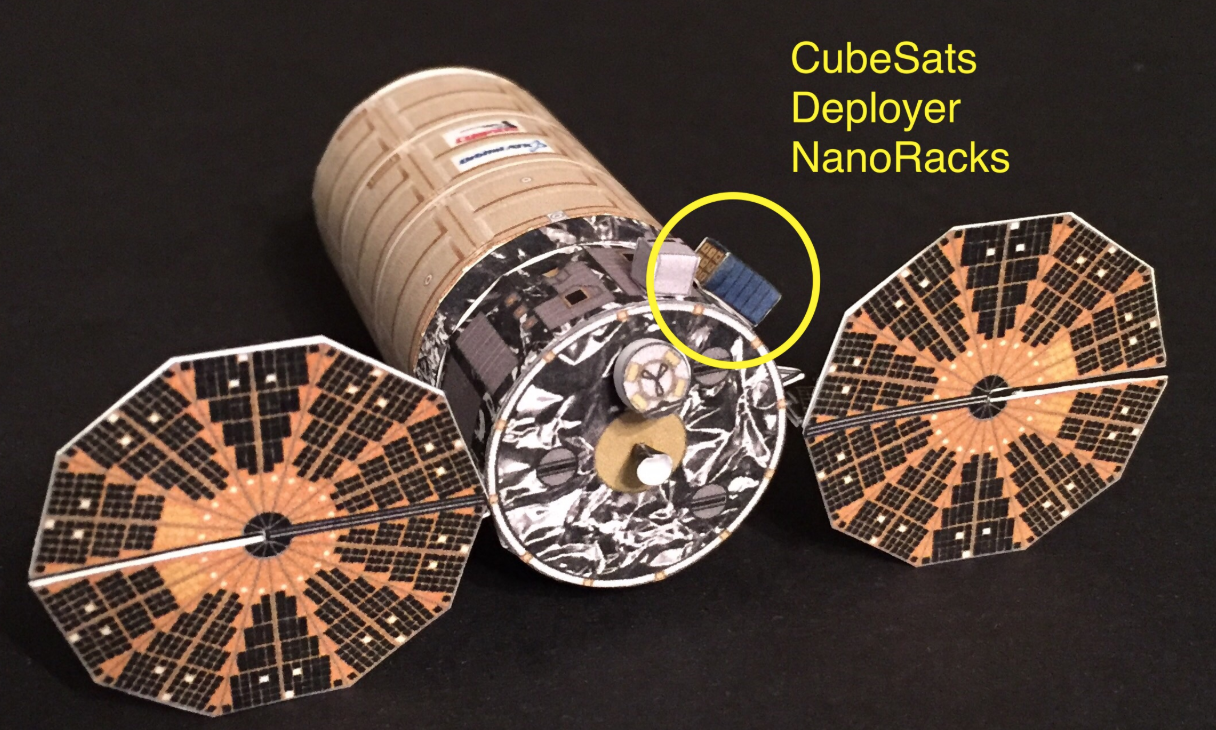 CubeSat deployer and its location on the outside of the Cygnus craft. (Credit: Northrop Grumman)

“We did have a late manifest change,” said Frank DeMauro.  “One of the things we can do on both the Cygnus side and the Antares side is we have the flexibility to make these swap outs.  In this case, [inside Cygnus] it was relatively straightforward. There were some cargo bags that NASA decided to fly in place of some others.”

Outside Cygnus, 11 ThinSats (CubeSats) were removed from this NG-10 flight because of the Soyuz crew abort and associated reshuffling of the world-wide Station cargo launch manifest.

The reason has to do with the fact that these ThinSats are uncontrolled after their deployment from Cygnus, and that gave NASA pause.

“NASA’s concern was that we could be putting these small satellites into basically the plane of the ISS orbit, and because the Progress 71P [has] moved into the same time frame, they just wanted to be very cautious.  So out of an abundance of caution, they elected to have us de-manifest the ThinSats from NG-10, and we’re gonna give it another go on NG-11” next year, said Mr. DeMauro.

Adding, “We’re super excited about this ThinSat program, and we’ve partnered up with Mid-Atlantic Regional Spaceport and Virginia Space, and we’re flying all these, I think it’s 60, ThinSats that are actually designed and built by schools.  So it’s kind of a little bit of a shame. We [actually] got all that integrated. We did a fit check and a deployment test; we were ready to go.  But we understand.  The primary mission is the most important thing.  And NASA’s concern is that once we deploy [them], they may be so small that they can’t be tracked from the ground radar.”

With all things rockets, NGIS is constantly looking to improve its vehicles – even with three extremely reliable and rock-steady flights of the Antares 230 variant under their belt. 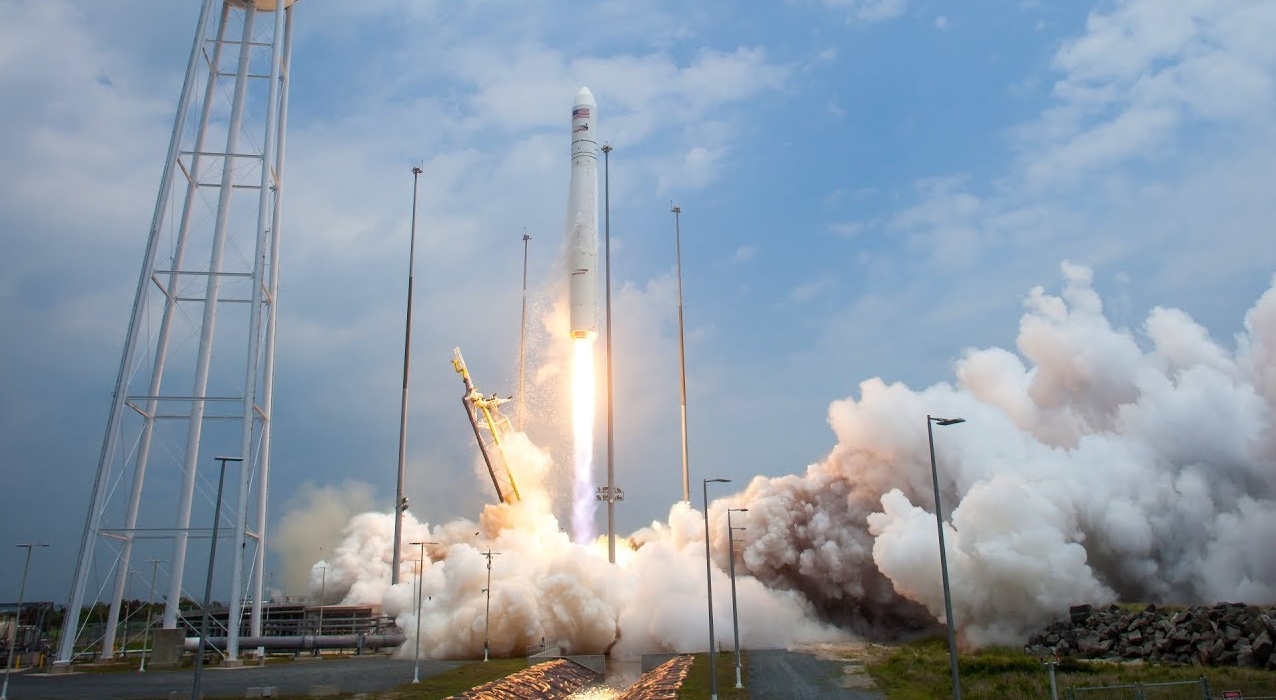 An Antares rocket launches from Pad 0A at the Mid-Atlantic regional Spaceport to begin a Cygnus resupply mission to the Space Station. (Credit: NASA)

Those three flights have all been “a little bit above nominal but right in family,” noted Kurt Eberly. “We’re really seeing very repeatable performance, no flight anomalies.”  But that doesn’t mean the processes surrounding the vehicles can’t be tweaked and enhanced as new things are understood.

This is a requirement from NASA as part of the CRS2 (Commercial Resupply Services 2) contract for continued cargo missions to the ISS starting in 2019.  But NGIS opted to pull the requirement forward and introduce it as part of their CRS1 Extension contract, of which the NG-10 mission and the S.S. John Young are part.

“Basically, after we turn on the vehicle in the final countdown, we upload through manual entry the mass of the upper stage, including the payload with cargo.  And then we have basically a lookup table that we use to provide the right guidance that corresponds to the uploaded mass on day of launch.

This is advantageous because, as Mr. Eberly notes, “as long as we’re in those bounds, we’re basically pre-approved for launch.  And that’s gonna help us not just by allowing NASA to have this late adjustment capability and flexibility, but also [because] we’re already approved by the Range for this trajectory scheme; so we don’t have to go through the usual submittals on a mission-specific basis.”

Cygnus undertook a two phase to the International Space Station, aligning for close approach to the orbital lab for grapple on Monday morning, 19 November – just over 48 hours after launch.

Astronaut John Young pictured walking on the moon during Apollo 16 (left) and in an official crew portrait (right) for the maiden voyage of the Space Shuttle Program. (Credit: NASA)

Speaking to this Cygnus’ name, Frank DeMauro said, “You know of course the storied history by John Young and the astronaut corps.  He flew a multitude of spacecraft, not the least of which was the first Space Shuttle mission.

“For a lot of folks, he was a hero from Apollo, and he absolutely was.  And then for folks from a little bit younger generation he was a hero because he started the Space Shuttle era and had the courage to get into that spacecraft with Bob Crippen and fly it for the first time.

“To us, he personifies courage and support of the human spaceflight program.  I think it’s also worth mentioning that because he was the first pilot of the Space Shuttle and how that played such a major role in building the Space Station, we thought there was really great connectivity there.  So we’re really proud to name it after John Young, and we’ll work hard to do him proud.”