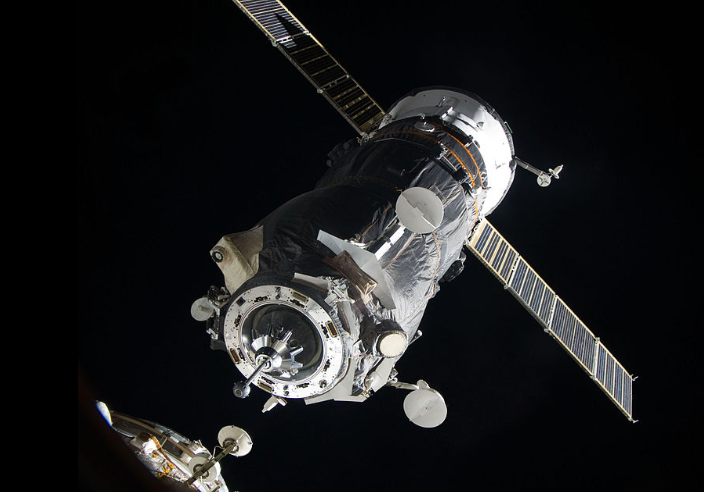 The Russian Progress MS-10 resupply vehicle for the International Space Station launched from the Baikonur Cosmodrome in Kazakhstan on a mission to return the Soyuz-FG rocket variant to flight and resume Russian launches to the Station on Friday.  The Soyuz-FG is the same rocket variant that suffered an in-flight failure during the crewed Soyuz MS-10 launch last month.

The in-flight abort resulted in the safe recovery of the two crewmembers, a Russian cosmonaut and a NASA astronaut, and briefly grounded the Soyuz rocket family as Roscosmos conducted a customarily quick investigation to determine root cause of the failure.

(Read about that failure and recovery here.)

Since the Soyuz crew abort last month, Roscosmos had launched two Soyuz rockets (both the 2-1b variant) while Arianespace launched a single Soyuz of the ST-B variant.

Friday marked the return of the Soyuz-FG since its October failure, and the flight was in part designed to serve as the final Soyuz return to flight verification mission prior to the resumption of crew launches on the Soyuz-FG currently planned for 3 December.

Originally, Progress MS-10 was set to launch on a different variant of the Soyuz, the 2-1a, but this was changed on 13 August 2018 when the mission was remanifested to use a Soyuz-FG launcher instead.

Soyuz-FG is actually the older of the Soyuz variants when compared to Soyuz 2.

The primary difference is that the Soyuz-FG uses an analog control system which limits its capability while the Soyuz 2 features uprated engines, improved injection systems, and digital flight control and telemetry systems that allow the rocket to be launched from a fixed platform as opposed to the Soyuz-FG which has to have its launch platform physically turned and aligned with the launch azimuth as it is incapable of performing a roll maneuver after liftoff.

Nonetheless, Soyuz-FG and Soyuz 2 are linked as the specific upgrades featured in the Soyuz-FG were originally designed for incorporation with the Soyuz 2.

When some of these Soyuz 2 improvements were ready early, Roscosmos decided to make the Soyuz-FG as an intermediate upgrade between the already-in-service Soyuz-U and the upcoming Soyuz 2.

Originally, the plan was for Soyuz-FG to have a relatively short life before all crew and cargo missions for the International Space Station were transferred to the Soyuz 2-1a.  However, failures of the Soyuz 2 – specifically with uncrewed Progress resupply ships – caused great concern within NASA as to the Soyuz 2’s reliability.

Roscosmos and NASA then entered into agreement that the Soyuz-FG rocket would remain the sole Russian carrier of crew to the ISS for as long as NASA continued to buy seats on the Soyuz.  However, as the date at which NASA will stop using the Soyuz has continued to slip with delays to Commercial Crew, the plan to keep all human launches on the Soyuz-FG changed as well.

As of writing, the switch to the Soyuz 2.1a variant instead of the Soyuz-FG for the crew-carrying Soyuz MS-series spacecraft appears set for the latter half of 2019 when a Soyuz 2.1a rocket will loft a Soyuz MS craft packed with cargo on an uncrewed test flight to the Station.

Originally, the Progress MS-10 mission was set to launch on 31 October from the Baikonur Cosmodrome; however, the flight was delayed 17 days following the crewed Soyuz launch abort last month.

#ProgressMS10: The State Commission confirmed the scheduled lift-off time of the Soyuz-FG launch vehicle and gave the go-ahead to loading the launch vehicle with propellants. The launch is scheduled at 18:14 UTC.

🚀 The live broadcast will be available from 17:00 UTC. pic.twitter.com/fxJAmCv7m0

With the root cause of the Soyuz-FG failure confirmed, technicians have spent time ensuring that the Soyuz-FG which will loft the Progress MS-10 will not suffer the same issue.

That work was largely completed by 6 November, when technical management at Baikonur confirmed that Progress MS-10 was ready to enter the final stages of launch preparation ahead of integration with its Soyuz rocket.

Following this decision, Progress was filled with fuel and compressed gases over the course of two days, after which the craft was moved into the spacecraft processing facility where final work ahead of encapsulation began.

This included mating the Progress to its Soyuz vehicle adapter, which in turn connects to the top of the third stage of the Soyuz-FG rocket.  After being secured to its adapter, Progress MS-10 was encapsulated inside its payload fairing and then transported by rail to the spacecraft integration facility. 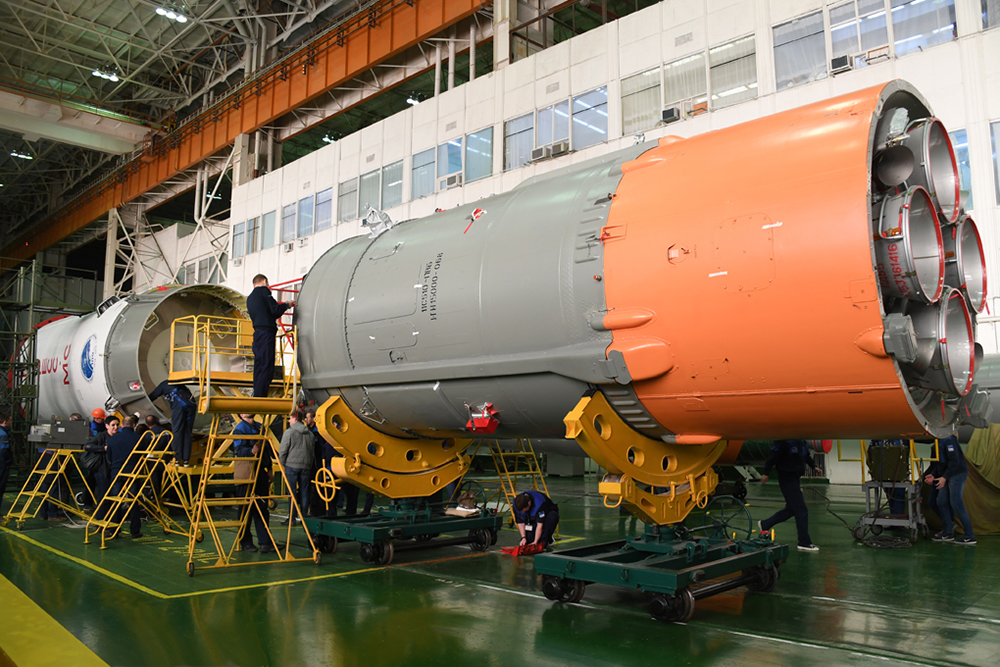 Engineers at Baikonur prepare to mate the Progress MS-10 (left) to the third stage (right) of its Soyuz-FG carrier rocket. (Credit: Roscosmos)

Assembly and integration of Soyuz and Progress MS-10 were completed on 13 November, and a launch readiness review cleared the vehicle for rollout to its Site No. 1 launch pad – which occurred on Wednesday, 14 November.

By mid-day local time at Baikonur on Friday, 16 November, all work had been completed ahead of fueling operations and a final clearance to proceed with the launch was issued.

At the time of launch, the ISS was roughly 425 km southwest of the launch pad, passing directly over the launching Soyuz and Progress MS-10 about 22 seconds after liftoff.

Assuming a nominal orbit insertion, Progress MS-10 will arrive at the International Space Station and perform an automated docking to the aft port of the Zvezda Service Module on the Russian segment at 14:30 EST (1930 UTC) on Sunday, 18 November. 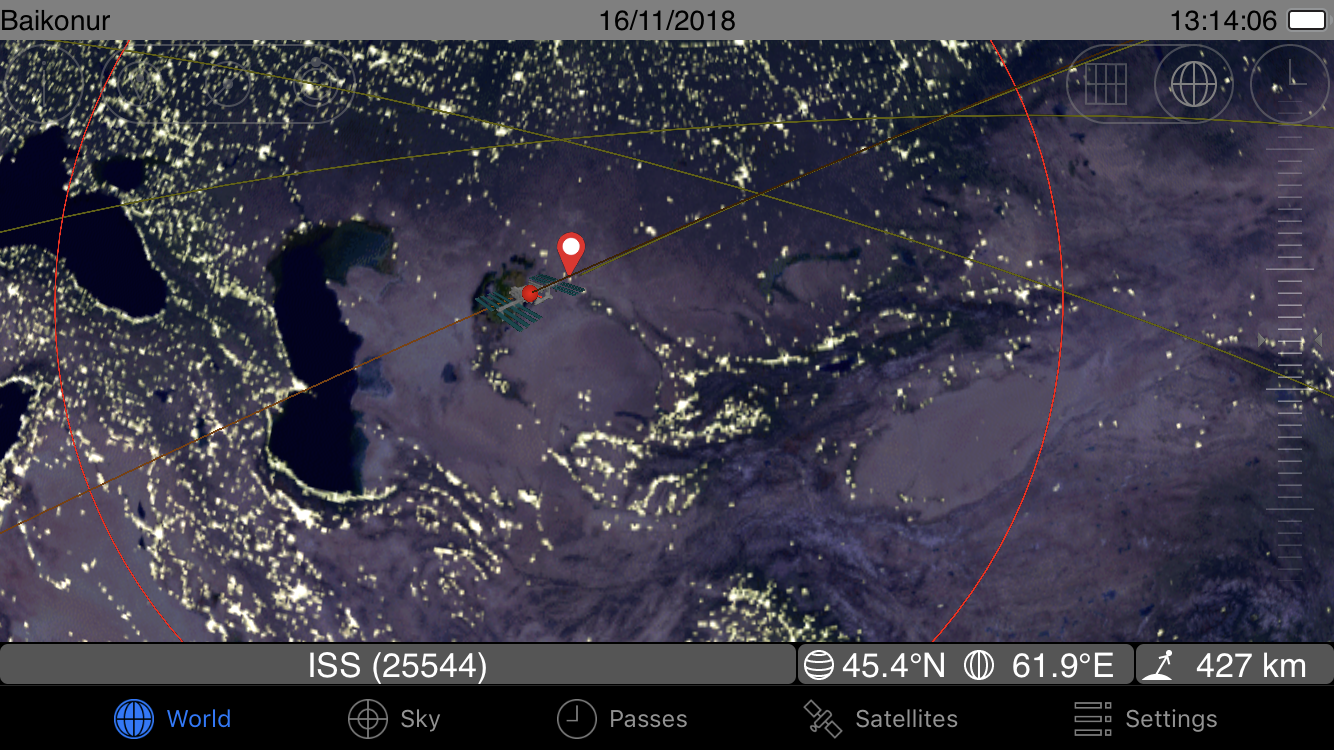 In all, Progress MS-10 is the tenth in the new line of Progress spacecraft, the 162nd Progress mission since the program began in 1978 for resupply efforts of the Salyut 6 space station, and the 73rd Progress mission to the ISS, counting the two Progress flights that were not designated as resupply missions because they delivered modules to the Station.

SpaceX Falcon 9 launches Es’Hail-2 from 39A