NASA’s New Horizons spacecraft has made history once again, completing a daring mission encounter at 00:33 EST (0533 UTC) on 1 January 2019 when the spacecraft flew by Kuiper Belt Object 2014 MU69.

The flyby will marked the farthest solar system object encounter in history, with New Horizons flying a trajectory designed to ensure its safety while maximizing scientific returns from this distant, mysterious, and primal remnant of the formation of the solar system 4.5 billion years ago.

Time of closest approach came successfully at 00:33 EST (0533 UTC) while the spacecraft was purposely not communicating with Earth.  Confirmation of a successful flyby was received through the Deep Space Network on Earth at 10:30 EST (1530 UTC) – 10 hours after the flyby.

But investigating 2014 MU69 during the flyby was not as easy as it was with Pluto because the exact position of MU69 was unknown, meaning the New Horizons team had to plan an observation sequence for the spacecraft to account for all possible locations of the object in New Horizons’ instrument’s field of view.

2014 MU69 might not be a sexy and glamorous name for the public, but it is the official designation of the Kuiper Belt Object (KBO) New Horizons will encounter on 1 January 2019.

Seeking an unofficial but more public-friendly name, NASA held a contest to provide a nickname for the object, with the moniker Ultima Thule eventually chosen.

The name Ultima Thule defines a distant place located beyond the borders of the known world.

The issue with this name in terms of 2014 MU69 is that the KBO is well within the boundaries of the known solar system, with thousands of known Kuiper Belt Objects in its orbital neighborhood as well as numerous other Scattered Disc Objects, Detached Objects, Extreme Trans-Neptunian Objects, Sednoids, and Oort Cloud Objects well beyond 2014 MU69’s orbital boundary.

More so, the New Horizons team itself has not submitted a formal name for the KBO for consideration to the International Astronomical Union and have stated on multiple occasions that they will not do so until the flyby data is reviewed and a better understanding of the characteristics of 2014 MU69 are known.

To this end, NASASpaceflight will refer to the object by its official designation, not its nickname. 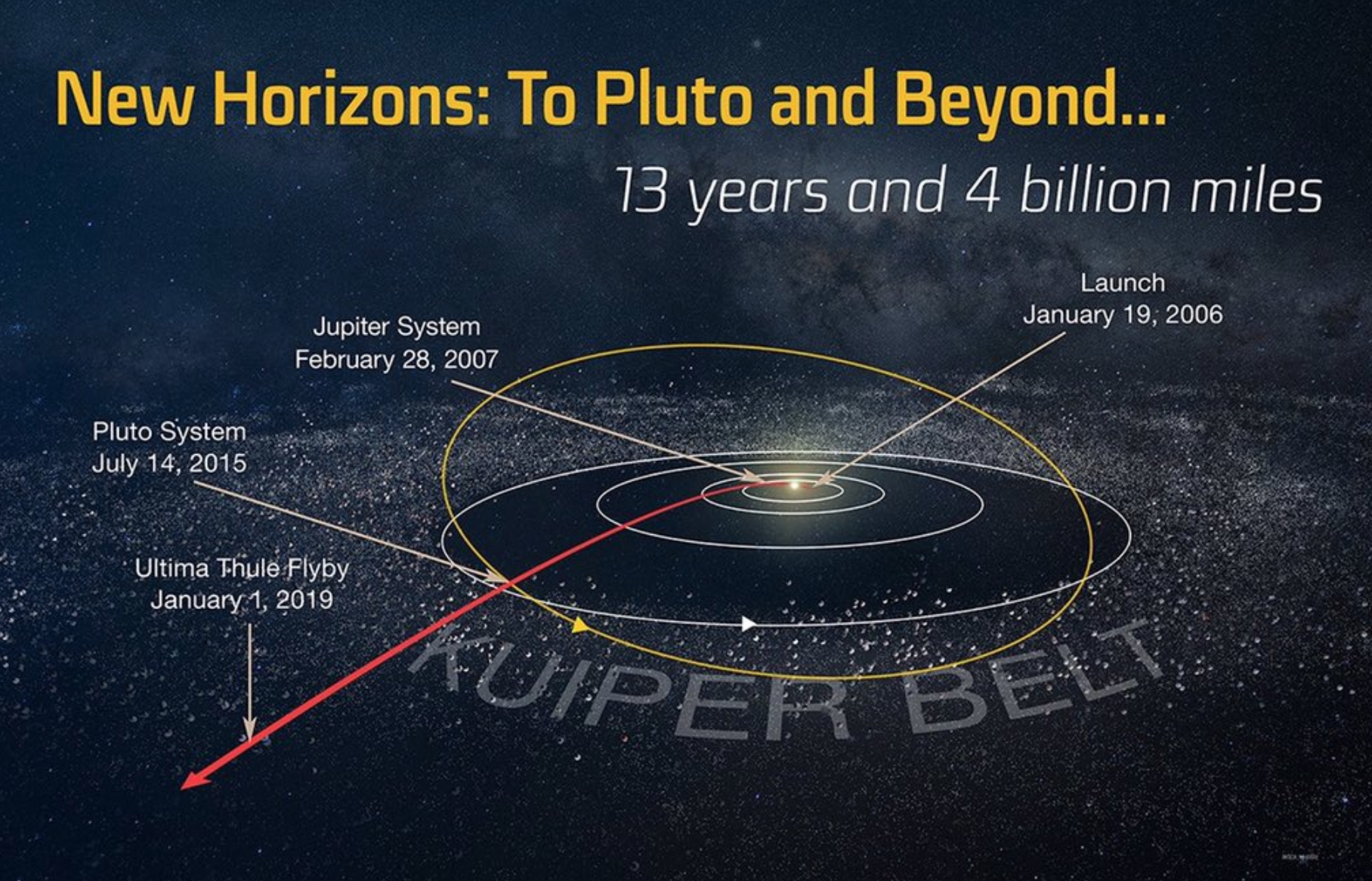 The path of New Horizons to Pluto… and then onward to 2014 MU69. (Credit: NASA/JHUAPL/SWRI)

Adding to the historic nature of the encounter is the fact that 2014 MU69 wasn’t even discovered until eight and a half years after New Horizons was launched on its primary scientific mission to study the dwarf planet Pluto and its moons.

After sailing past Pluto on 14 July 2015, the New Horizons team celebrated their victory while keeping a firm focus on the now extended mission to perform up-close observations of additional Kuiper Belt Objects.

(Read about New Horizons’ encounter with Pluto here and about some of the Pluto science returns here.)

One month after the Pluto encounter, the New Horizons team, in August 2015, chose 2014 MU69 as the next flyby target.

Discovered by astronomers using the Hubble Space Telescope on 26 June 2014, MU69 will be the farthest solar system object in history to be explored up close by a human probe. 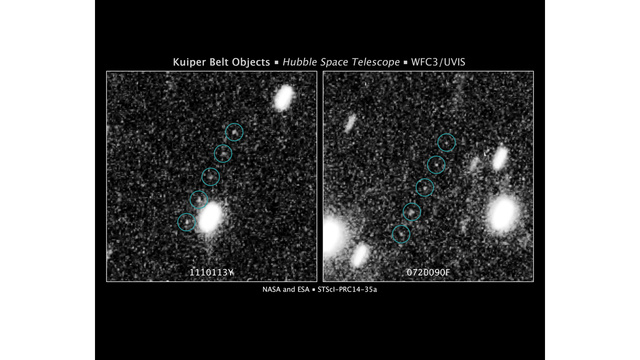 Additional course correction maneuvers gradually refined New Horizons’ final approach toward 2014 MU69 while allowing scientists to use the spacecraft’s cameras to gather information on the object to avoid potential hazards in the area during the flyby.

These observations were coupled with ground- and space-based telescopic observations of 2014 MU69 which surprisingly revealed more and more mysteries than they did answers about the object.

While it speaks to the level of technological advancement we’ve reached that we are able to send a spacecraft to an object we didn’t know existed when that spacecraft left Earth, this same achievement presented significant issues, ones that the New Horizons team had to account for when designing the flyby sequence New Horizons will perform.

(Read about some of the observational mysteries of 2014 MU69 here.) 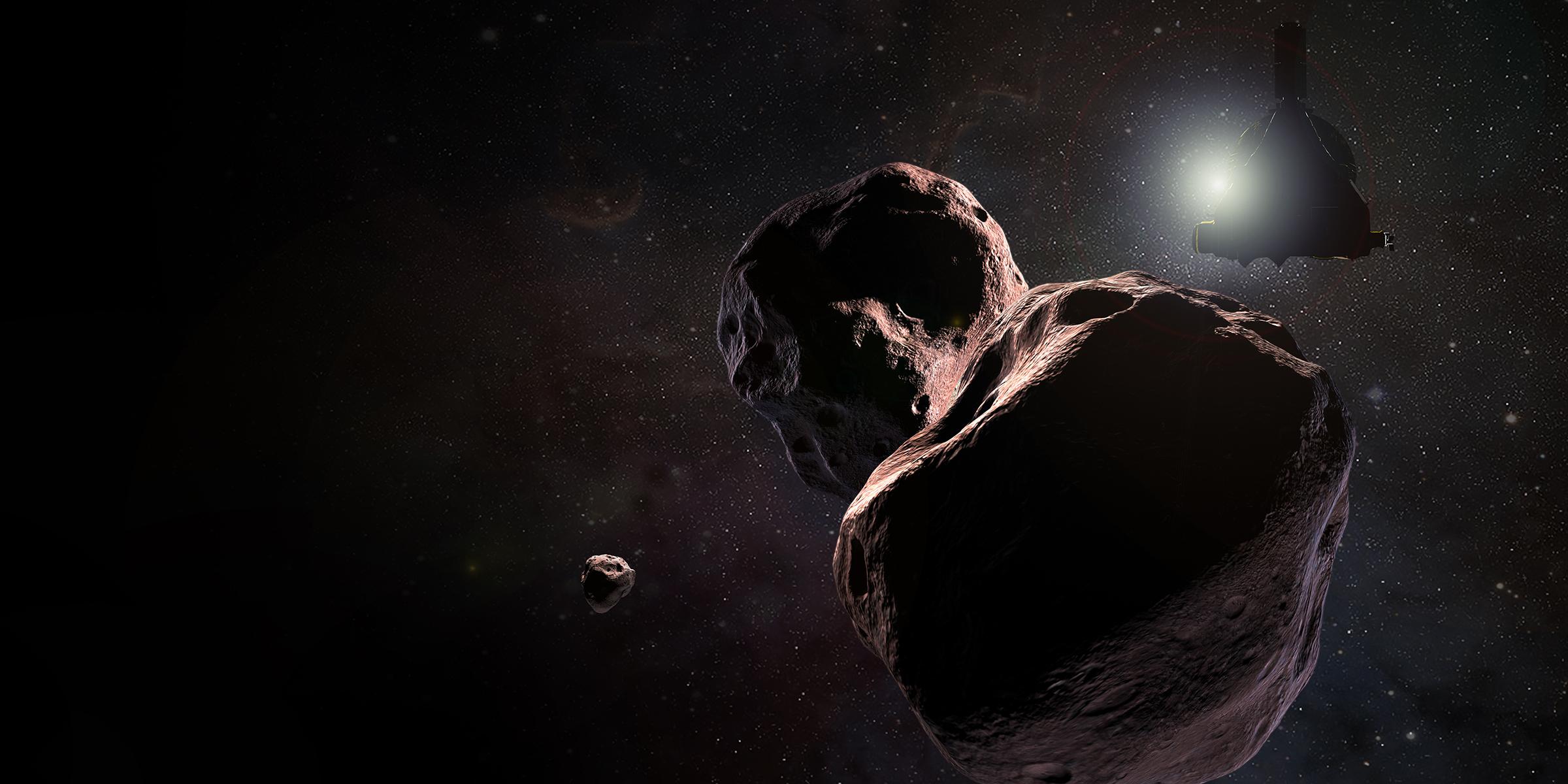 One such issue is that the exact size of 2014 MU69 isn’t precisely known.

Even with the latest images as New Horizons approached the KBO, it was still unknown whether 2014 MU69 was a single irregularly shaped object or if it was a close or contact binary.

Without knowing this, it was not possible to determine a precise size for the object, with estimates ranging anywhere from “no more than 20 miles (30 km) long” and between 9-12 miles (15 to 20 km) in diameter.

Uncertainty in 2014 MU69’s size was compounded by strange observations returned from New Horizons as it approached the KBO.

One particular observation that puzzled scientists was the object’s lack of a characteristic “light curve”.

Measuring changes in 2014 MU69’s brightness during its rotational period revealed no observed, repeated pulsations in brightness (the light curve) as would be expected from a rotating object the shape of MU69.

Composite image of 2014 MU69 taken 1 December, 2018 by the Long Range Reconnaissance Imager (LORRI) with a yellow circle centered on the location of MU69; at right, the region within the yellow box has been expanded, with stars subtracted. (Credit: NASA/JHUAPL/SwRI)

“It’s really a puzzle,” said New Horizons Principal Investigator Alan Stern, of the Southwest Research Institute.  “I call this [2014 MU69’s] first puzzle – why does it have such a tiny light curve that we can’t even detect it? I expect the detailed flyby images coming soon to give us many more mysteries, but I did not expect this, and so soon.”

While the last option would be the most bizarre of the explanations currently believed possible, it is nonetheless an option – as is the possibility that the explanation for the lack of a light curve will not come from one of these three postulated options.

An additional mystery: exactly where is 2014 MU69?

That might sound like a silly question.  Of course we knew where this object was. We flew a spacecraft by it.

While it’s true that we knew the approximate location of 2014 MU69, the reality going into the flyby was that scientists hadn’t been able to observe the object for that long because they only found it in 2014.  And because it moves so slowly across the sky due to its large orbit, scientists didn’t have a great deal of information on its precise orbit. 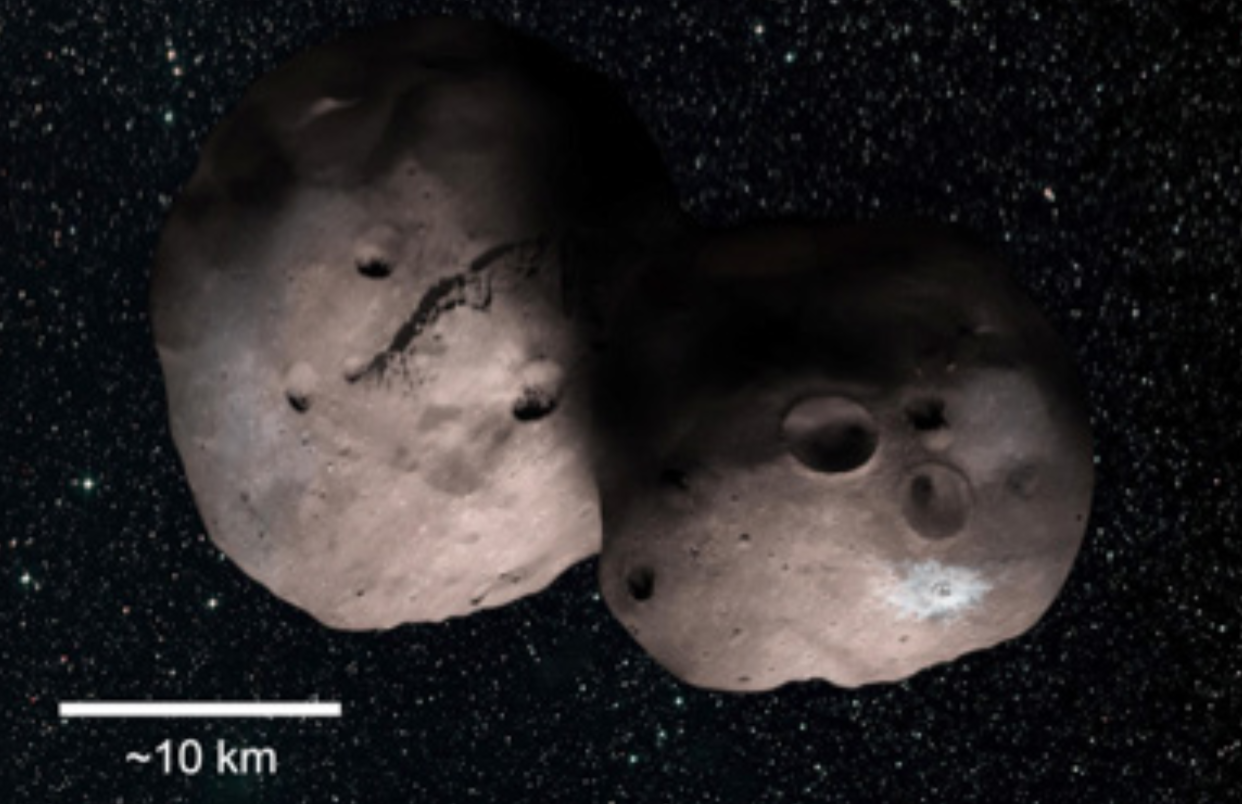 Artist’s impression of 2014 MU69 as a contact binary. (NASA/JHUAPL/SwRI/Alex Parker)

And that resulted in a position uncertainty of several thousand miles – which was a major potential issue for New Horizons’ cameras and instruments which have a limited field of vision.

To account of this position uncertainty, the New Horizons team had to program an observational flyby sequence to account for almost all of the location possibilities of 2014 MU69 in relation to the probe.

While it is hoped that the observation sequence allowed New Horizons’ cameras to capture images of the KBO at closest approach, the possibility remains that the cameras will not find the object in their fields of view because of the uncertainties in MU69’s exact location.

However, confidence that the highest resolution images would be captured rose on 31 December, just hours before the flyby, based on the last set of navigation data returned to Earth by New Horizons.

Nonetheless, it is important to remember that the difficulties surrounding this flyby and the unknown elements of 2014 MU69 could have resulted in New Horizons’ cameras missing the object all together. 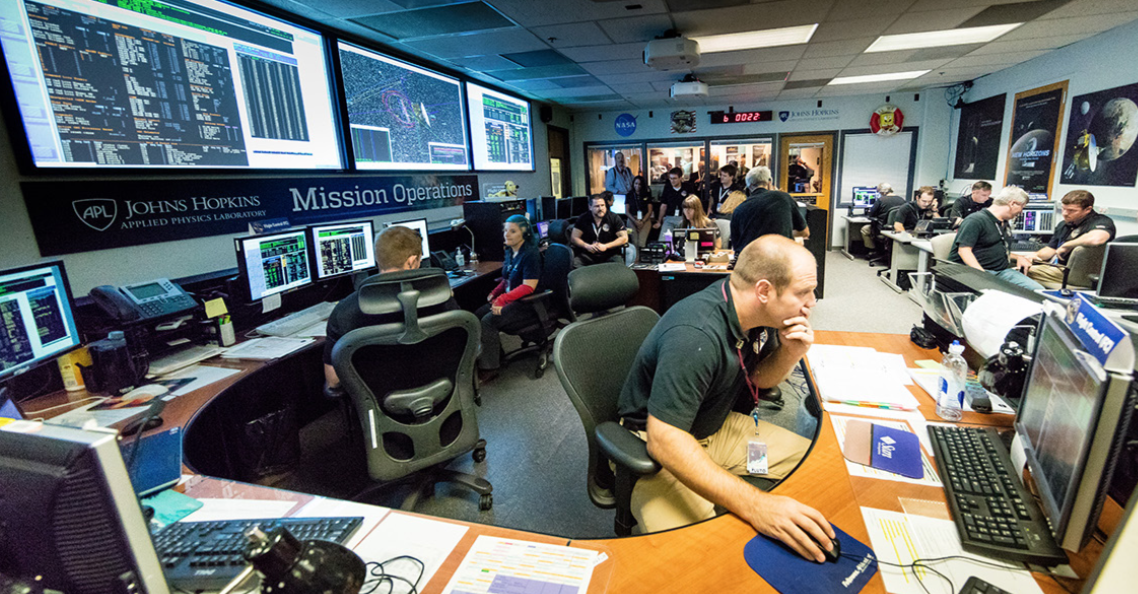 Equally important to remember is that if the closest approach images aren’t captured, that does not mean the flyby was a failure as other instruments were be functioning during the flyby, returning data about the space surrounding 2014 MU69.

More so, images captured prior to closest approach were returned to Earth before the flyby.

The bottom line is that New Horizons survived the flyby and didn’t enter safe mode… meaning it has a full collection of data to transmit.

In the four days immediately preceding the flyby, New Horizons alternated between periods of scientific data collection and optical navigation imaging before turning around and downlinking that information to Earth for the teams to review.

This information led to the final uplink and tweak of the flyby sequence on the morning of 31 December EST in the United States.

The day prior, on 30 December, the first Fail Safe downlink occurred, transmitting data already gathered about 2014 MU69 to Earth.

A second Fail Safe downlink followed on 31 December before New Horizons entered the core phase of its flyby sequence.

As with the Pluto encounter in 2015, New Horizons’ communications dish was aimed away from Earth during closest approach to allow the spacecraft’s instruments to scan the area where 2014 MU69 was predicted to be.

The flyby sequence continued for another 3 hours 47 minutes as New Horizons – as it did with the Pluto encounter – spun around to capture images and scientific data of 2014 MU69’s shadowed side.

Then, 3 hours 47 minutes after closest approach, New Horizons ended the flyby sequence and oriented itself with its communications antenna aimed at Earth. 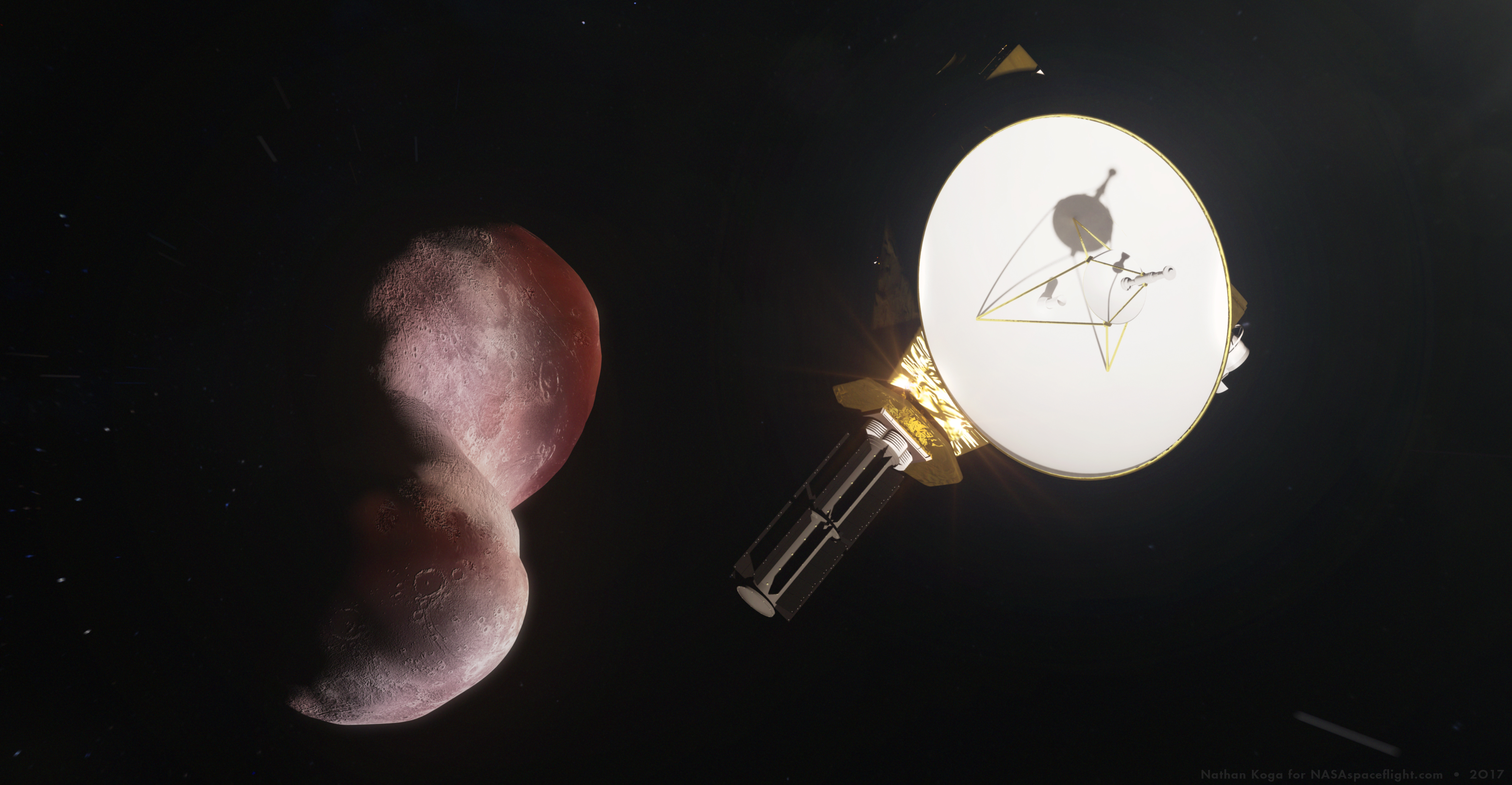 At this point, New Horizons transmited a 17-minute phone home signal, which was sent from the spacecraft at 04:22 EST (0922 UTC) on 1 January.

Because New Horizons was 4.1 billion miles (6.6 billion km) from Earth at the time of this transmission, it took the signal 6 hours 8 minutes to arrive at Earth and the Deep Space Network.

The “I’m alive and performed the flyby successfully” signal from New Horizons arrived right on time at Earth at 10:30 EST (1530 UTC) on 1 January.

Importantly, this phone home signal confirmed a perfectly healthy spacecraft with a full load of data ready to transmit.

The phone home signal did not contain any scientific data or images and simply provided a status on the overall health of the spacecraft. 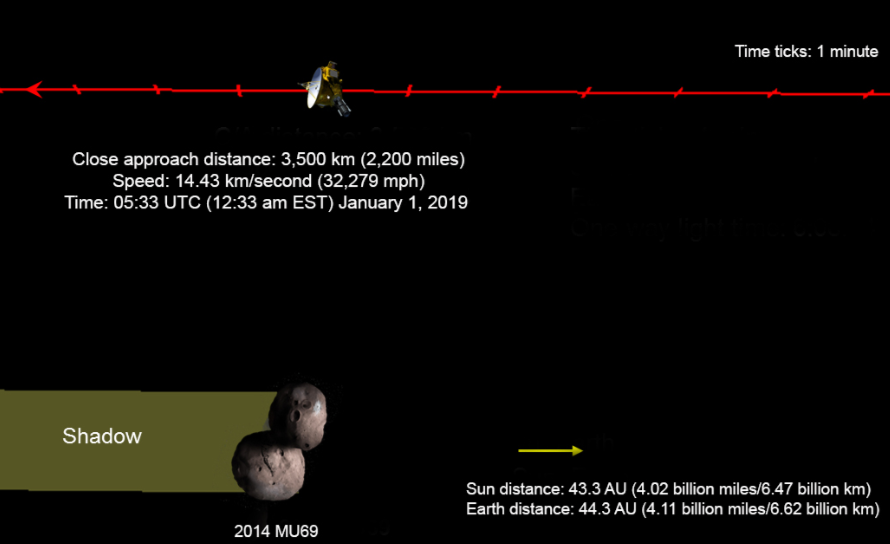 In all, the multi-hour flyby of 2014 MU69 will result in the collection of 50 GB of data, just 5 GB less than the total amount of information gathered in 2015 during the Pluto encounter.

Because of the immense distance and slow data downlink rate, it will take New Horizons 20 months to return all of the 2014 MU69 data to Earth.

The New Horizons team has reveled the final, and as of writing, best image of 2014 MU69 delivered to Earth on 31 December 2018 before the close approach flyby. 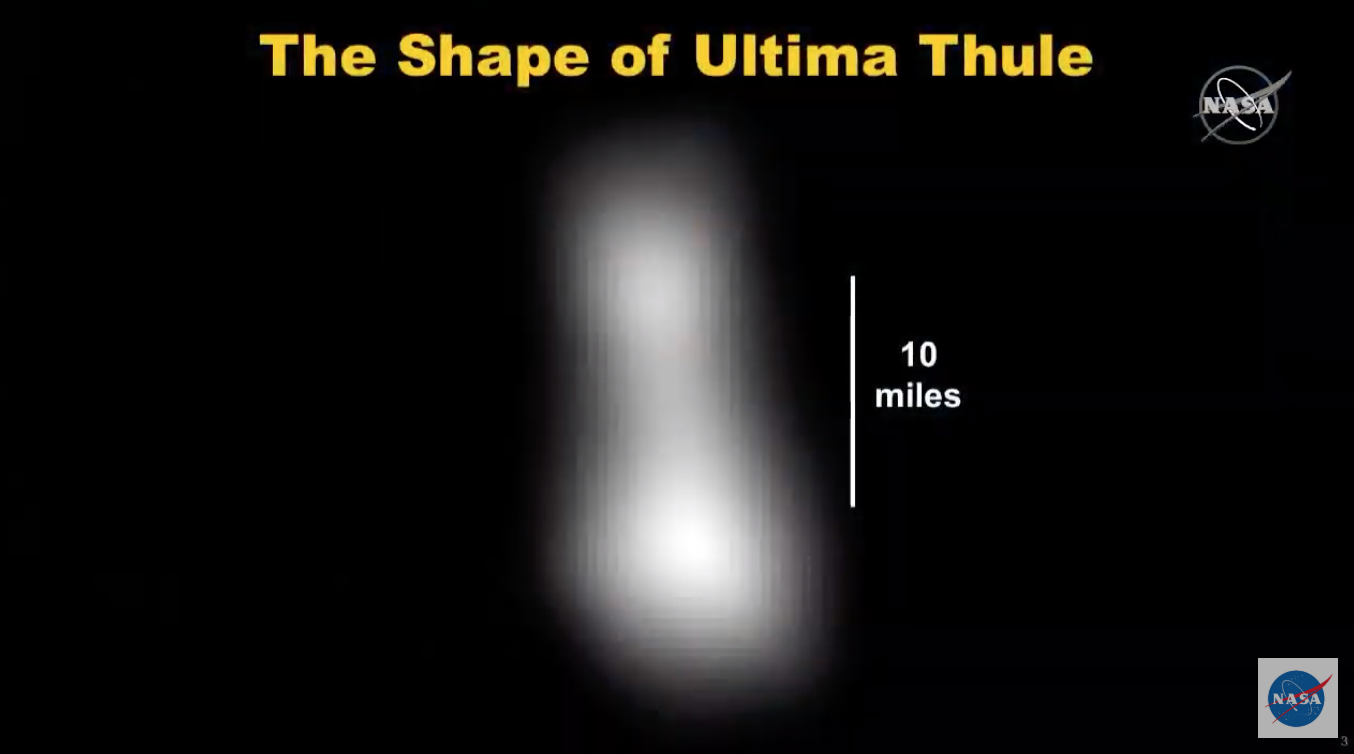 The image shows MU69 as a bilobate object (composed of two lobes), and the team believes the object is in fact a single structure, not two objects close to or touching each other – through they caution that they’re not 100% certain on that and that the first science downlink currently en route to Earth will reveal this once and for all.

The final pre-flyby image has provided a better size estimate for MU69, which is now believed to be 35 x 15 km.

The lack of a light curve puzzle has been answered.  MU69’s rotational axis was aimed right at New Horizons.

Team is cautiously optimistic that the highest resolution images were captured based on New Horizons’ phone home navigation data.  But there is still a chance those images won’t be centered and might not have been capture (though that last possibility is far less than it was this time yesterday).