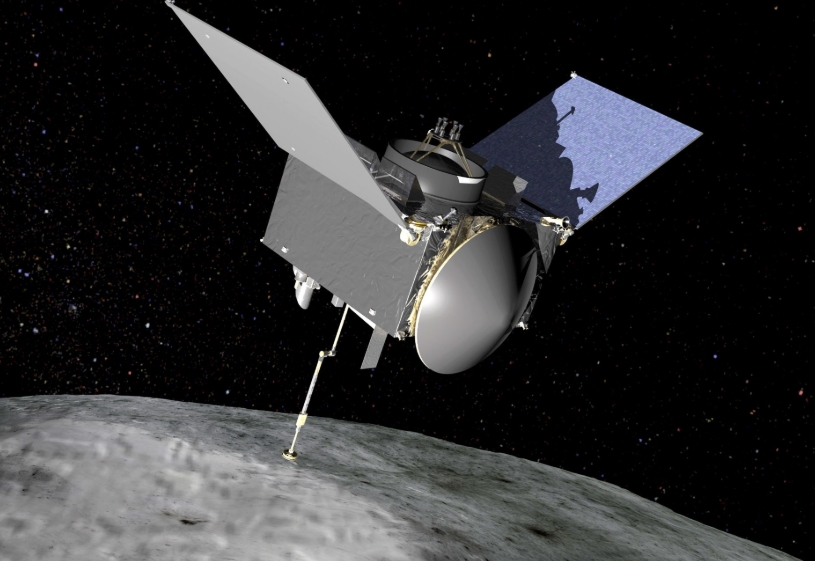 On December 3, 2018, after a journey that started on September 8, 2016, with a launch aboard an Atlas V 411 from Launch Complex 41 at Cape Canaveral Air Force Station, Florida, the OSIRIS-REx spacecraft has arrived safely at the asteroid Bennu.

The OSIRIS-REx (Origins, Spectral Interpretation, Resource Identification, Security, Regolith Explorer) spacecraft was conceived as a mission to bring back samples of regolith from a primitive, carbon-rich asteroid to Earth for extensive study. In addition, the mission would study the asteroid from close up and characterize it.Information gleaned from this study, including a close-up study of the Yarkovsky effect (the subtle pressure exerted by photons of light on the asteroid, thus slowly changing its trajectory) could also be important in preventing future impacts with near-earth asteroids (NEA’s).OSIRIS-REx, with Lockheed Martin as the spacecraft contractor, the Goddard Space Flight Center providing mission management, and the University of Arizona as the lead science institution, was chosen by the NASA New Frontiers program in May 2011.The mission, headed by principal investigator Dante Lauretta, was planned as a mission to the asteroid then known as 1999 RQ36, an approximately 500 meter (0.5 km) diameter potentially hazardous asteroid (PHA) that has a 1 in 1800 chance of impacting Earth in 2182.

#WelcomeToBennu! After two years of travel – and more than a decade of planning and work by my team – I’m here. But Arrival is just the beginning… https://t.co/0bQPUwqUCp

This asteroid, named Bennu after a mythological Egyptian bird, by 9 year old student Michael Puzio in a contest by the Planetary Society, was selected from over 500,000 asteroids known in our Solar System as it was an Apollo-class near earth object (NEO) between 0.8 and 1.6 AU from the Sun (Earth is 1 AU).

In addition, it is larger than 200 meters and so does not spin rapidly (which would complicate sample retrieval), and it is a primitive carbon-rich leftover from the beginnings of the solar system, with organic molecules, volatiles, and amino acids that could tell us how life began on Earth.

The spacecraft design, a 4,650 pound craft when fueled, draws on Mars Reconnaissance Orbiter heritage and was built in their Denver facility. 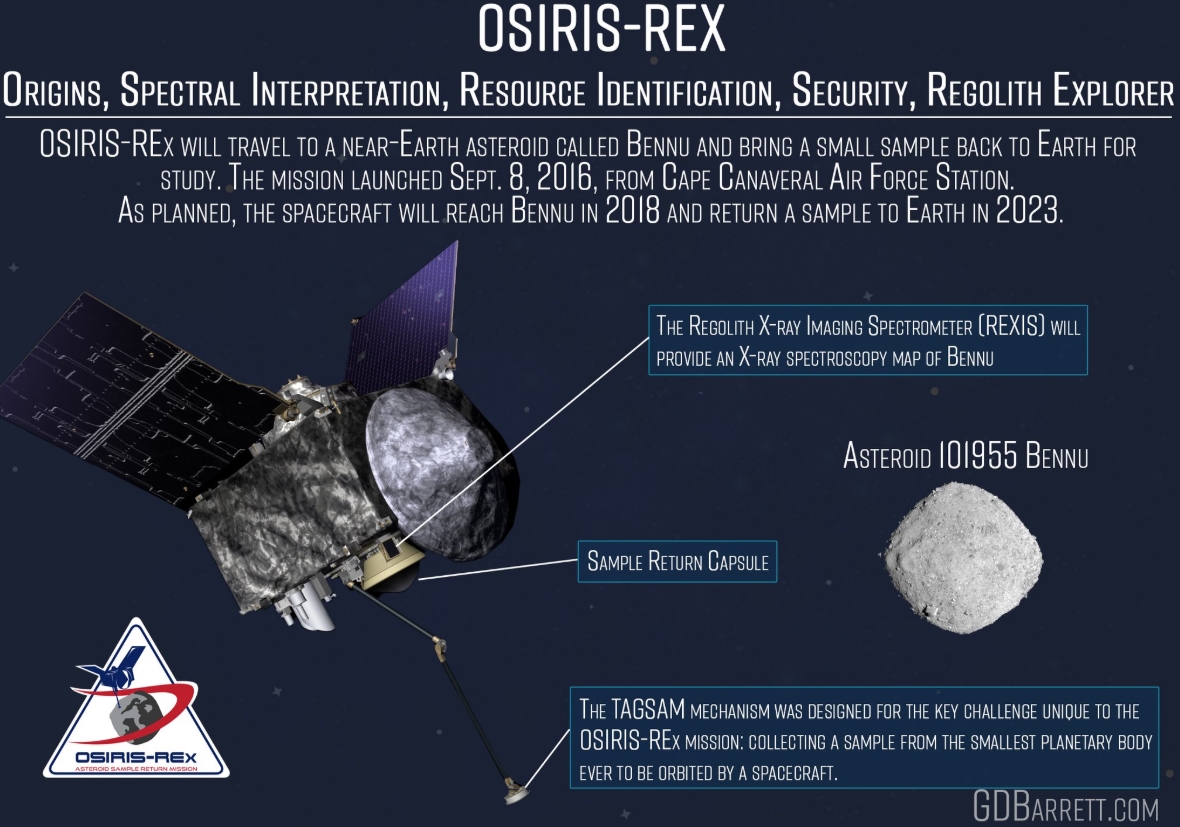 OSIRIS-REx is equipped with five instruments to characterize its target, as well as a robotic arm with a sampling device, a sample return capsule, a high-gain antenna, two 10 foot long solar panels that generate from 1,226 to 3,000 watts (depending on distance from the Sun), and 28 engines (4 main engines, 6 medium thrust engines, 16 attitude control thrusters, and 2 engines for the TAG sampling maneuver).

A suite of three cameras collectively known as OCAMS is aboard the spacecraft. Polycam is an eight-inch telescope that was the first camera to acquire Bennu and will be used to perform high-resolution mapping, while the Mapcam is used to search for plumes and satellites, and to take RGB color and near-infrared images for spectral imaging, topographic mapping, and color photography. Finally, the Samcam is meant to continuously image the TAG maneuver and regolith sampling.

Another spectrometer, OVIRS, will also be used to obtain spectral data, but from blue to near-infrared wavelengths, to measure organics and minerals. The third spectrometer, known as REXIS, is an X-ray spectrometer that will map out the individual elements present on Bennu’s surface.

The TAGSAM is the actual sampling device that will gather anywhere from 60 grams to 2 kilograms of asteroid material from the surface of Bennu. It consists of an 11 foot long robotic arm with a sampling device at the end that uses nitrogen gas to stir up surface material into the sampler. There is enough nitrogen gas for three sampling attempts, and once enough material is gathered, the sampling device will be deposited in the Sample Return Capsule. 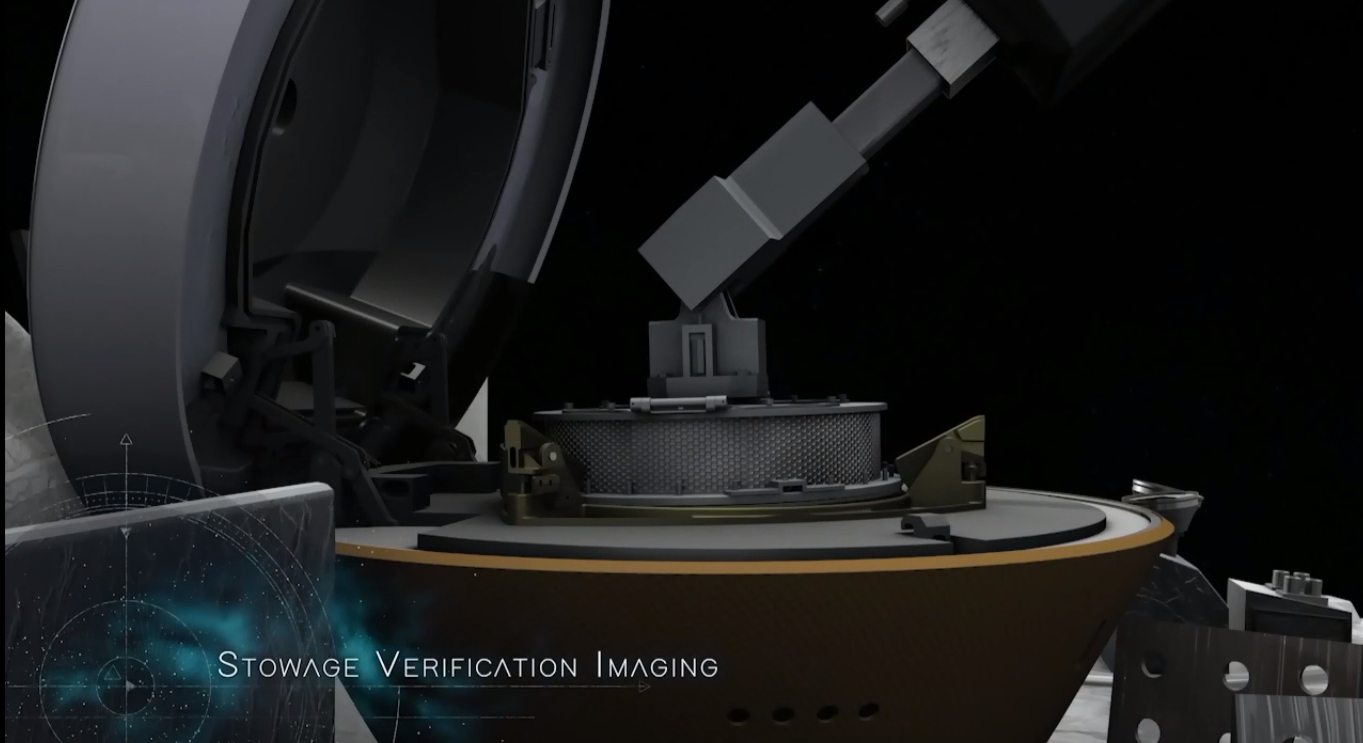 The OSIRIS-REx, after some moments of drama caused by the explosion of a Falcon 9 on a nearby launch pad and some quick work to ensure that this incident would not cause a loss of cooling capability to the spacecraft on its launch pad, launched successfully on September 8, 2016, at 7:05 pm Eastern Daylight Time.

The Atlas V 411 configuration launch vehicle performed well and the craft was on its way for a two year-plus trip to asteroid Bennu. Along the way, the spacecraft performed a flyby of Earth on September 22, 2017 for a gravity assist to place the craft on its final trajectory to Bennu.

Now that OSIRIS-REx has arrived at Bennu, the spacecraft will start its preliminary survey phase, which will take the craft over the north and south poles plus equator five times. This will get a mass estimate, refine the spin-state model, and generate a 75 cm global shape model.

Achievement unlocked: "We have arrived!" Our @OSIRISREx mission reached asteroid Bennu, where it will spend almost a year mapping and studying to find a safe location to collect a sample. Watch: https://t.co/zI282xjLzc pic.twitter.com/VMPs7SIfSf

Later this month, the Orbital A phase will start and OSIRIS-REx will go into a 50 hour close gravitationally bound orbit around Bennu, with an altitude of 0.9 – 1.2 miles (1.4 – 2.0 km) and the team will learn how to navigate around Bennu.

From the end of February to early June 2019, OSIRIS-REx will start two detailed survey phases which will generate chemical composition and digital terrain maps along with global image mosaics and at the end of the process will have enough information to select up to 12 candidate sampling sites.

Afterward, the Orbital-B survey will finish mapping Bennu well enough to select a primary and backup sampling site. From September to December the Recon phase will make very detailed surveys of the two sampling sites from as low as 738 feet altitude.

The mission will start a rehearsal phase, which will include hovering over a “matchpoint”, and which will last for the first half of 2020. In mid-2020 the sample collection phase will start and the TAG maneuver to hover over the matchpoint and grab the sample is currently set for July of that year.

In March 2021 OSIRIS-REx will fire its engines for a 2 year return to Earth and on September 24, 2023 at 9 am Mountain (3 pm UTC) the Sample Return Capsule is scheduled to touch down at the Utah Test and Training Range near Dugway. The returned samples will be curated by the Johnson Space Center’s ARES laboratory and a center in Japan.