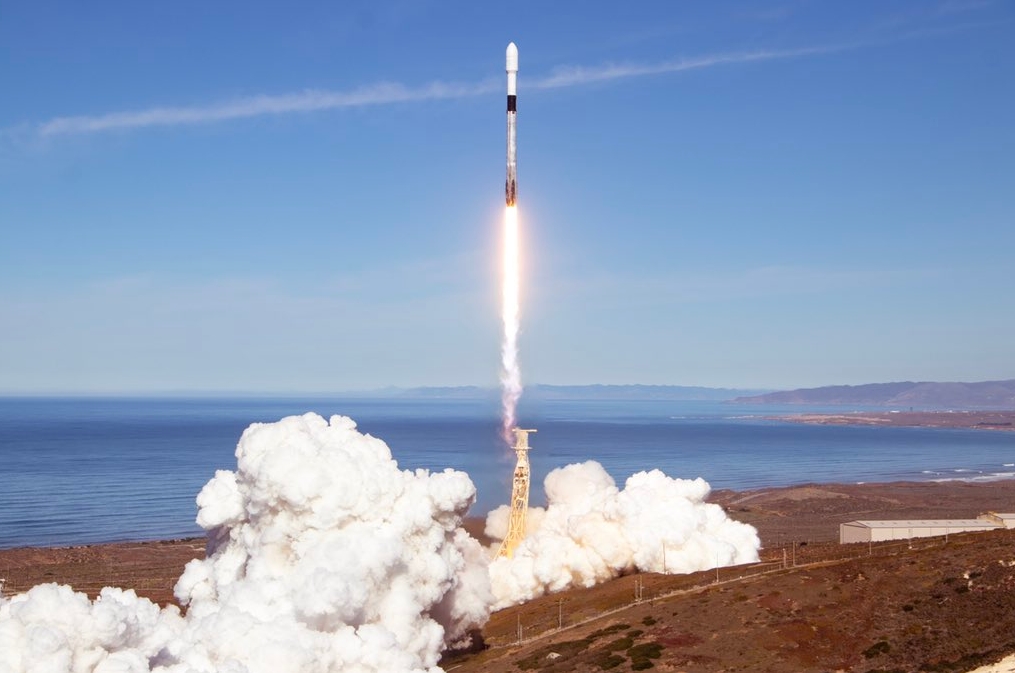 SpaceX will for the first time launch a Falcon 9 booster on its third flight on Monday, as part of a mission to deliver a cluster of small satellites to low Earth orbit. Liftoff is scheduled for a twenty-eight minute launch window that opens at 10:31 Pacific Time (18:31 UTC). T-0 occurred at 34 minutes past the hour.

Designated SSO-A or the SmallSat Express, the cargo for this launch consisted not of a single primary payload but of a collection of smaller satellites from companies and organizations around the world that are sharing their journey into space. The rideshare mission has been co-ordinated by Seattle-based Spaceflight Industries and consists of 64 satellites for 34 customers from 17 different countries and the European Space Agency.

Originally named the 2017 Sun-Synch Express, when it was expected to launch last year, the SSO-A mission targets a sun-synchronous orbit. This is a special type of near-polar low Earth orbit which allows a satellite to pass over points on the Earth’s surface at the same mean local solar time, allowing similar lighting conditions for observation and research.

Rideshare satellites have become increasingly common in recent years, typically in the form of smaller satellites hitching a ride alongside a single, larger, primary payload. Spaceflight Industries have previously conducted launches of this type aboard rockets including Antares and India’s Polar Satellite Launch Vehicle (PSLV), although this launch marked their first dedicated mission. Spaceflight has also placed satellites aboard previous Falcon 9 launches, arranging to have CubeSats carried to the International Space Station aboard SpaceX’s Dragon spacecraft – as well as Northrop Grumman’s Cygnus – for subsequent deployment from the outpost.

As well as being the most satellites that have been carried aboard a single Falcon 9 launch, the flight also marked a step forward in SpaceX’s drive to developing reusable launch systems. Having already perfected recovering the first stage of the Falcon 9 and demonstrating that it can be successfully re-flown on a subsequent mission, the SSO-A launch took this a step further by using a booster that had already flown twice. This will be Core 1046, which was first used in May for the launch of the Bangabandhu 1 communications satellite from the Kennedy Space Center, before flying again from Cape Canaveral in August with the Telkom 4 spacecraft.

Falcon 9 is a two-stage liquid-fuelled rocket, powered by RP-1 propellant – rocket grade kerosene – which is oxidized by liquid oxygen. It was the second rocket developed by SpaceX following the smaller Falcon 1, which made five launches between 2006 and 2009 and paved the way for the company to develop larger and more capable vehicles. Falcon 9 first flew in June 2010 and the mission marks its sixty-fourth flight.

From its previous sixty-three missions Falcon 9 has achieved complete mission success sixty-one times. The two exceptions were a 2012 launch where a first stage engine failure left the rocket unable to deploy its secondary payload into a usable orbit, although the primary payload was still deployed as planned, and a 2015 failure where the rocket disintegrated during ascent after the second stage oxygen tank ruptured. Another Falcon 9 was destroyed, along with its payload, in a pre-launch accident in 2016.

Falcon 9 is fast becoming a space workhorse not just for the United States, but for spacefaring organizations around the world. With this launch it will have flown eighteen times in 2018, more than any other rocket worldwide, with two more launches planned before the end of the year.

The rocket has been incrementally upgraded by SpaceX, with a significant enhancement the introduction of the Falcon 9 v1.1 configuration in 2013, which stretched the rocket and upgraded its propulsion to increase its performance. This allowed SpaceX to begin testing recovery of the first stage, with another major enhancement the v1.2, or “Full Thrust”, Falcon 9 which made its debut in December 2015 and increased the range of missions on which recovery could be attempted.

The ability for Core 1046 to make a third flight comes as a result of the Block 5 upgrade to Falcon 9, which SpaceX introduced earlier this year incorporating improvements intended to improve reusability and further increase performance, while also addressing concerns NASA had raised about rating the vehicle for Commercial Crew missions, which are expected to begin next year. Previous versions of the stage were able to make two launches, after which they were either retired or simply not recovered. Core 1046 was the first Block 5 first stage to fly. 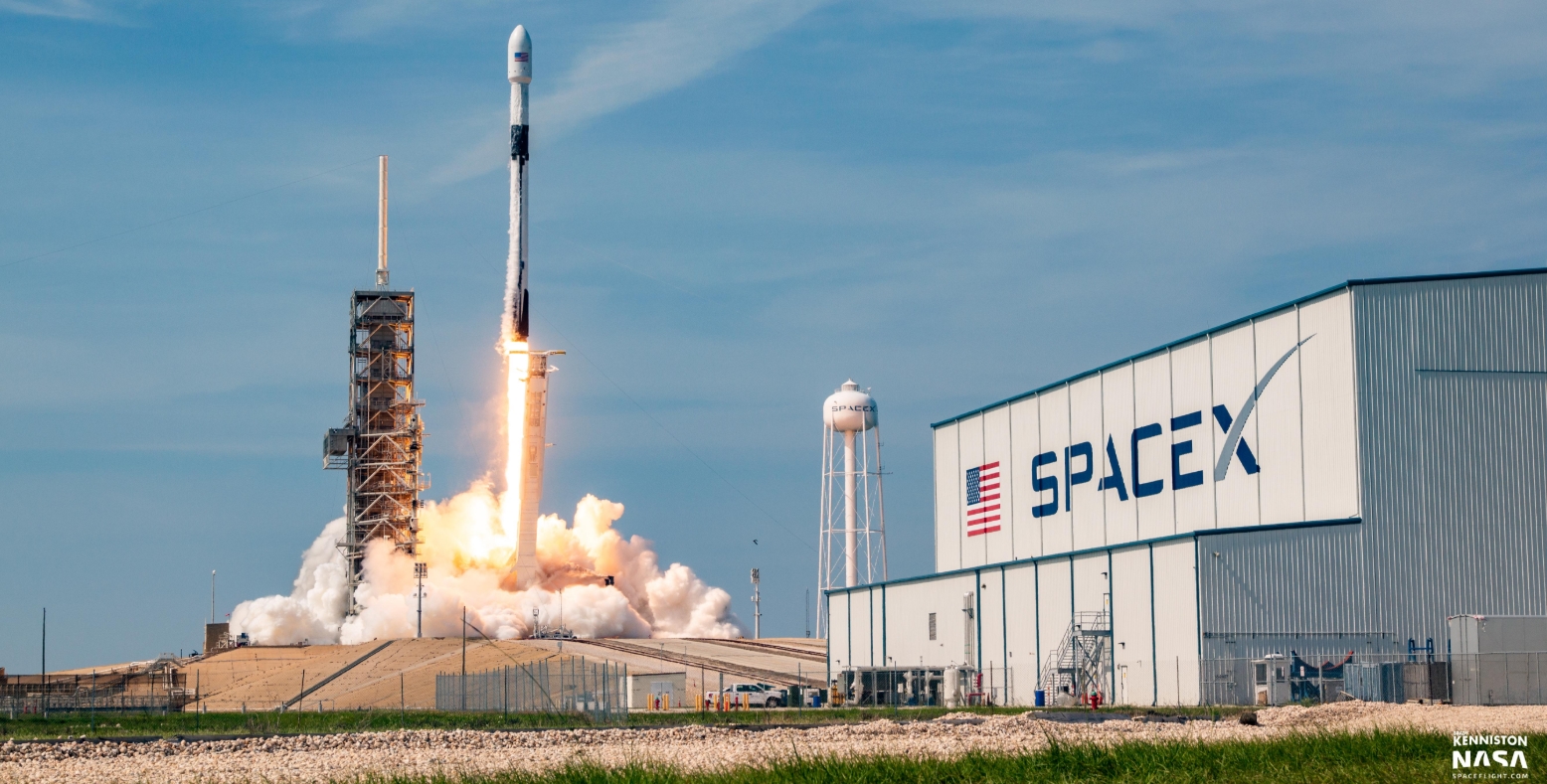 Depending on its mission, Falcon 9 is designed to return its first stage to Earth either by flying it back to the launch site – typically used for smaller payloads targeting low orbits – or by landing it aboard a converted barge, the Autonomous Spaceport Drone Ship (ASDS), stationed downrange along the rocket’s flightpath. This is performed by restarting several engines at two or three points after separating from the rocket’s second stage, culminating in a powered landing on a concrete landing pad or the deck of the ASDS.

After completing its third mission with Monday’s launch, Core 1046 will again fly back to Earth. While no aspect of the SSO-A mission would prevent the stage flying back to the West Coast recovery area, Vandenberg Air Force Base’s Landing Zone 4 (LZ-4), restrictions surrounding the planned launch of a national security mission from a nearby launch pad next week mean that the landing must instead be made offshore using the ASDS. Because of this, SpaceX used a hybrid of the two typical recovery profiles, with the drone ship located close to the Californian coast and the booster making a boostback burn to reach it, instead of conducting the landing downrange where not boostback would be required.

As well as making Falcon 9’s first stage reusable, SpaceX has been taking steps towards recovering and reusing the rocket’s payload fairing, with recent launches seeing attempts to catch the fairing with a ship as it descends under parachute. It is understood, however, based on the original launch target, an attempt to recover the fairing wasn’t included. With the new launch target, the possibility of a test returned. It was unsuccessful, but the fairings are said to be in good condition and will be recovered from the sea.

Falcon fairing halves missed the net, but touched down softly in the water. Mr Steven is picking them up. Plan is to dry them out & launch again. Nothing wrong with a little swim.

Space Launch Complex 4E was originally used by Atlas-Agena rockets – with twenty-seven launches carrying twenty-six KH-7 GAMBIT reconnaissance satellites and the experimental nuclear-powered SNAPSHOT. The launch pad was next used by Titan rockets, beginning with the Titan IIID in 1971 and continuing with the upgraded Titan III(34)D and later the Titan IV. Forty-one Titan rockets flew from SLC-4E, ending with the final flight of the Titan family in 2005.

SpaceX subsequently leased the complex from the US Air Force, beginning conversion work in 2011 ahead of the first Falcon 9 launch from the site in September 2013. It is the only Falcon 9 launch facility on the West Coast, allowing satellites to be placed into higher-inclination orbits than can easily be reached from its two launch pads on Florida’s Space Coast.

Ahead of the launch, Falcon was assembled horizontally in a hangar close to the launch pad, before being rolled out and erected using a transporter-erector-launcher (TEL), or Strongback. This structure is used to transport the rocket, raise it to the vertical, and provide umbilical connections while it is at the launch pad. Fuelling of the rocket begins about 35 minutes before launch with loading of RP-1 into both stages of the rocket, and liquid oxygen into the first stage. Liquid Oxygen began to flow into the second stage about sixteen minutes before launch, with the oxidizer continuing to be topped off until the final minutes of the countdown in order to replace oxygen as it boils off.

A few minutes before launch the strongback was moved to its launch position, rotating away from the rocket. The West Coast strongback is an older design than those used on the East Coast, so the retraction process is completed ahead of liftoff instead of having the structure fall away from the rocket at liftoff. In the last minute of the count propellant tanks were pressurized and the onboard computers undertook their final prelaunch checks.

About three seconds before liftoff, the nine Merlin-1D engines that power Falcon’s first stage began their ignition sequence. At the zero mark in the countdown liftoff occurred, with Falcon beginning its climb away from Space Launch Complex 4E. After maneuvering to its launch azimuth and beginning its pitchover, Falcon passed through Max-Q, the area of maximum dynamic pressure where it encounters the greatest aerodynamic forces, about fifty-nine seconds into the ascent.

Here’s a closeup and a wide angle from around the pad plus a streak shot from the press site. Congrats to #SpaceX for pioneering rapidly reusable spacecraft. @elonmusk @SpaceX @NASASpaceflight @SpaceflightInc @planetlabs @trevorpaglen @nevadaart #orbitalreflector pic.twitter.com/Ei6ior1BKn

The first stage – Core 1046 – powered Falcon 9’s ascent for the first two minutes and twenty-one seconds of flight before shutting down its engines. Three seconds later the first stage separated from the second and began reorienting itself for its post-separation maneuvers. Eight seconds after separation the second stage ignited its Merlin Vacuum (MVac) engine – a version of the Merlin-1D optimized for the vacuum of space. Six seconds later the first stage performed its boostback burn, firing to change its course back towards the launch site.

While the boostback would normally take the first stage back to shore, for this launch it stoppe short, instead targeting the Autonomous Spaceport Drone Ship waiting off the coast. Following its boostback the stage deployed grid fins, titanium structures that help to stabilize and guide the vehicle as it flies back through the atmosphere. About three minutes and twenty seconds after the start of the boostback burn, the first stage started up again for its entry burn to slow itself and limit heating as it passes back into Earth’s atmosphere. A third burn was made shortly before landing, which came at seven minutes and forty-five seconds mission elapsed time.

The landing was a success.

Falcon 9 B1046.3 lands for the THIRD time. Looks like she nailed the "X" too! pic.twitter.com/JzwXB8njNt

While the first stage was flying back to land, Falcon 9’s second stage continued on with the primary mission, to deliver the SSO-A payloads into orbit. The second stage made single burn during this launch, lasting seven minutes and 29 seconds. About eleven seconds into this burn, the payload fairing separated from the nose of the rocket. Three minutes and 46 seconds after the second stage burn ends, SSO-A’s complex deployment sequence began.

It took twenty-nine minutes and twenty-four seconds for all parts of the SSO-A payload to separate from Falcon 9, however the complete deployment process took up to six hours, using free-flying parts of the payload adaptor.

Once it completed its role in the mission, Falcon’s second stage fired again to deorbit itself, avoiding leaving unnecessary debris in orbit.