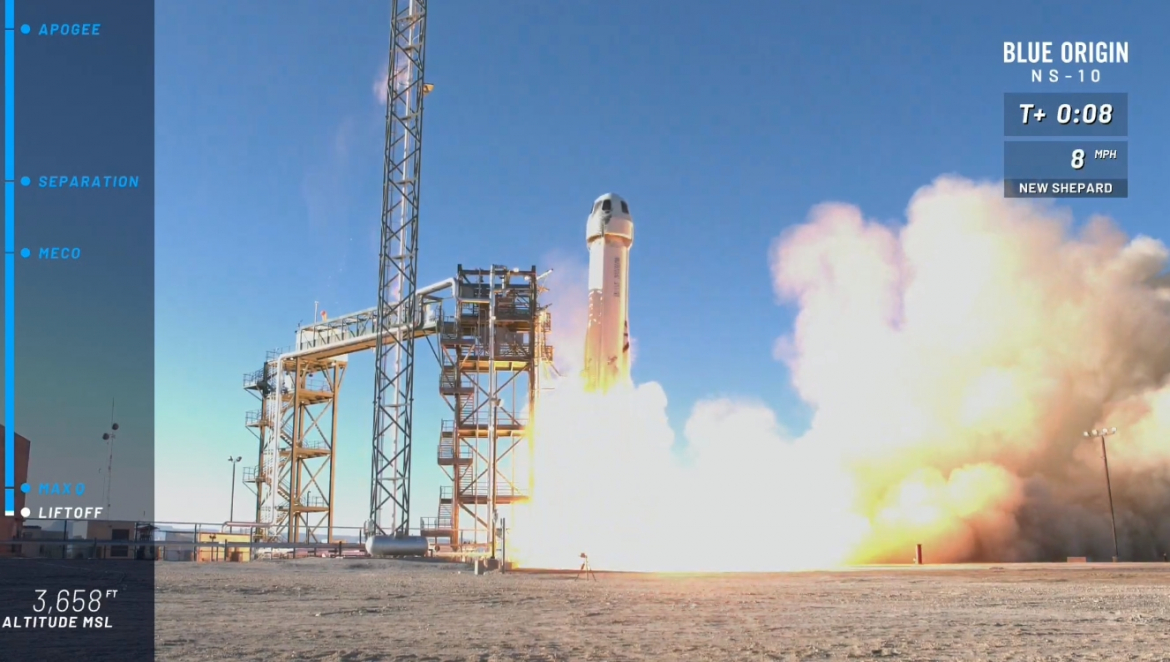 Blue Origin’s New Shepard rocket conducted its tenth test flight on Wednesday – marking another step towards launching paying customers into suborbital space. The launch at Blue Origin’s test site in West Texas took place at 15:05 UTC following a delay from late in 2018 due to an issue with ground equipment and unacceptable weather. This launch was also the third test flight to carry a host of NASA experiments along for the ride.

New Shepard is the first of a potential line of vehicles for Blue Origin. The rocket and crew capsule system is aimed at the suborbital tourism market, allowing paying customers to enjoy into a few minutes of zero-G flight prior to a parachute-assisted landing.

Jeff Bezos’s company is set to charge between $200,000 and $300,000 per ticket for the short suborbital flight – per unconfirmed media reports over recent years – finding itself in a mini-space race with Virgin Galactic’s SpaceShipTwo which itself achieved another milestone back in December.

VSS Unity successfully reached the edge of space for a few minutes, earning both its pilots FAA commercial astronaut wings.

However, there is a large contrast between New Shepard and SpaceShipTwo, past just the obvious.

While Virgin Galactic passengers will enjoy a smooth ride inside the spacecraft under the wing of the carrier aircraft (WhiteKnightTwo) before being released for a short but powerful ascent, New Shepard passengers will be lofted upwards from the launch pad via the more conventional rocket launch.

The landings are very different too, with SS2 gliding back to Earth, while New Shepard will return like a conventional capsule, deploying chutes for a soft touchdown on land.

While Virgin Galactic’s aspirations of launching customers have been delayed by many years – including one disastrous test flight that resulted in the death of a test pilot in 2014 – New Shepard’s test campaign only began in 2015.

Despite the loss of the first booster, the second flight in November 2015 kick-started a successful run of test flights.

That second flight saw the New Shepard booster lofting its Crew Capsule to an altitude of 329,839 feet before returning under powered control to an upright landing – marking the first time a suborbital rocket successfully landed after a straight-up/straight-down flight. 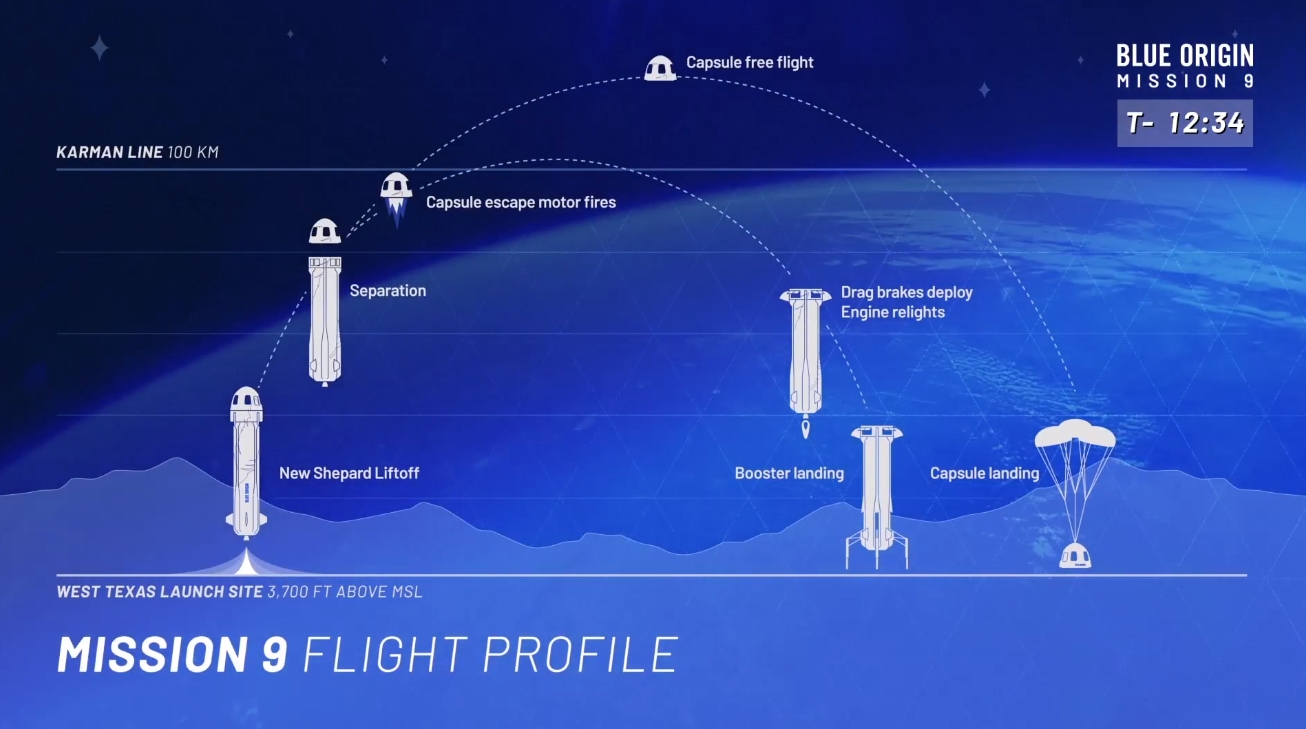 By the seventh test, the campaign featured a new next-generation booster – powered by its BE-3 engine – and the first flight of Crew Capsule 2.0, a spacecraft that featured real windows, measuring 2.4 x 3.6 feet.

The eighth flight saw the capsule reach 351,000 feet – making this a then-record flight altitude for the spacecraft. For test nine earlier this year, the altitude was 389,846 feet – the highest to date. It also conducted another safety escape system test.

These latest tests were designed to push the booster to its limit, which led to Blue Origin noting the potential they could lose the booster, not least during the focused testing on the escape system, centered around a solid motor firing for two seconds to fly the capsule free of a failing booster.

However, all tests – from test 2 to test 9 – have seen the booster return for a safe pinpoint landing, followed shortly after by the capsule parachuting to a landing site nearby.

“The opportunity to re-fly our payload is helping us not only validate and compare data for different flight profiles, but also test modifications and upgrades,” said Kathryn Hurlbert, principal investigator for SFEM-2 at Johnson. “In the very challenging task of flying things in space, it has been said – and I continue to believe – that ‘you are done with testing when you can’t think of anything else to test.'”

Other NASA technology payloads that flew on this test are focused on the nine technologies from government, academia and industry. Campaign Manager Ryan Dibley from NASA’s Armstrong Flight Research Center in Edwards, California added: “NASA is thrilled to have established flight providers and partners supporting new technology development with wide applications.”

While the synergy is less apparent, Blue Origin and Virgin (Orbit) also have competition beyond suborbital space. Virgin Orbit is now into captive carry tests of its LauncherOne rocket, which will be carried by a modified 747 called Cosmic Girl.

However, unlike the suborbital space tourism business, Blue Origin won’t be a direct competitor to Virgin Orbit. Bezos’ company has its sights set on the heavier end of the payload scale, targetting the realm of SpaceX, ULA and other big business launch providers.

This will begin with the maiden launch of New Glenn, which is expected to take place in 2020.

With the production facility at Exploration Park all-but ready to start producing New Glenn hardware, work is ramping up at the LC-11 and LC-36 pad facilities from which the rocket will be tested and launched from. 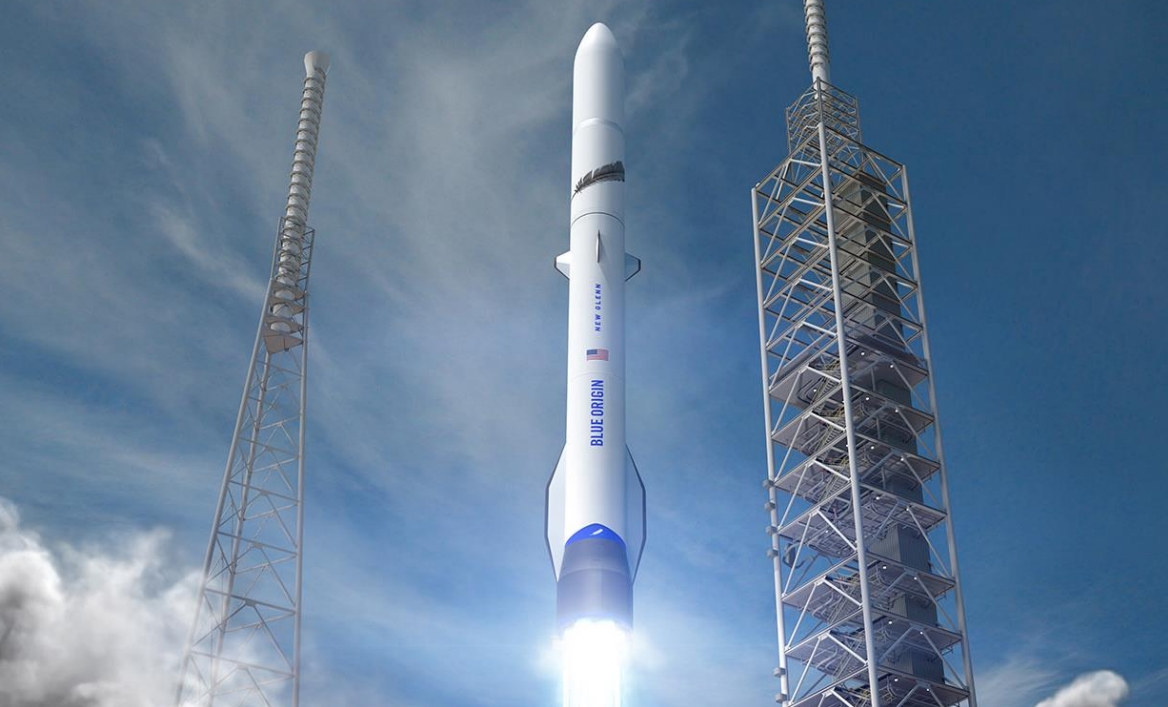 LC-11 will be used to test fire New Glenn engines, while LC-36 will be the launch site for the orbital rocket.

Blue Origin’s New Glenn rocket, which like its smaller sister New Shepard, will include a booster that will return for reuse. The landing ship is already undergoing conversion after arriving in Florida, in order to be ready to “catch” returning New Glenn boosters.

Blue Origin is also expected to eventually add an even bigger rocket to its family, the Super Heavy vehicle called New Armstrong. However, that is not expected until deep into the 2020s.