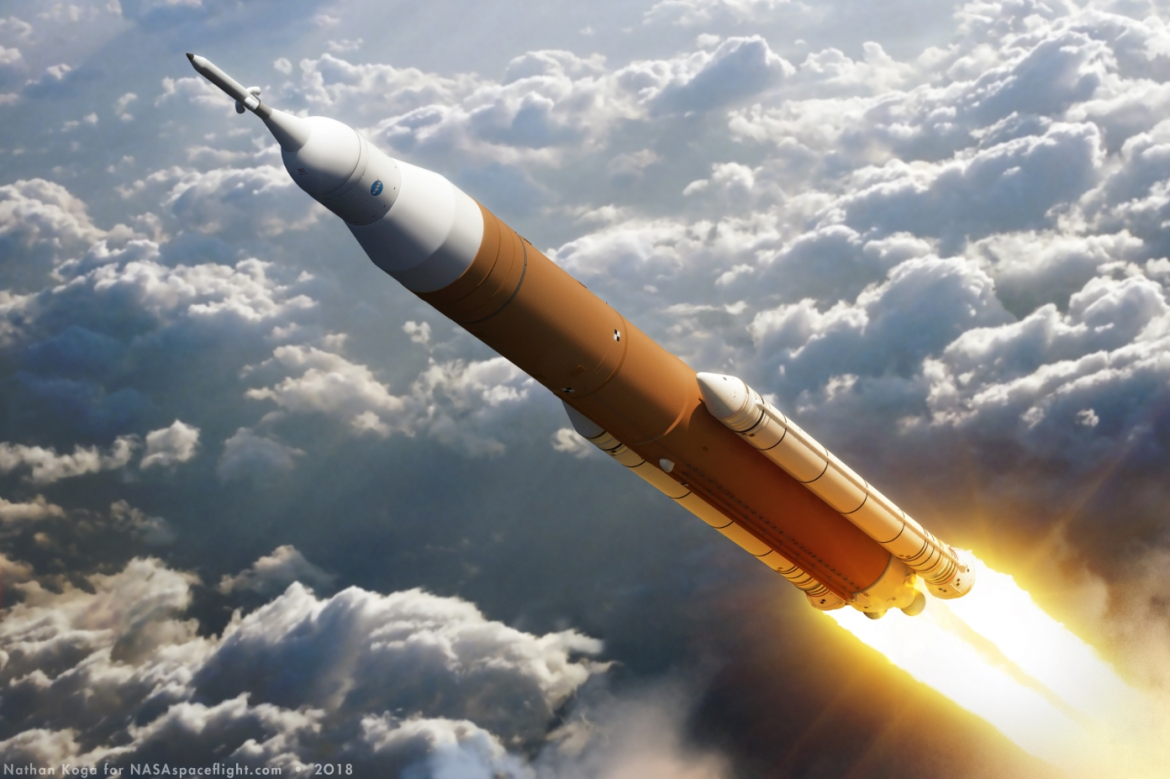 Over the past month Boeing assembled the top half of the first Space Launch System (SLS) Core Stage in a vertical stacking cell at the Michoud Assembly Facility (MAF) in New Orleans. The intertank, liquid oxygen (LOX) tank, and forward skirt were bolted together as the major part of the so-called “forward join” of the new rocket stage.

Final assembly of the stage involves first connecting its major elements into a top and bottom half before a final connection takes it out to over two-hundred feet in length with its engines installed. Once the Boeing production team at MAF finishes installation of remaining plumbing and wiring in the engine section, it will head into the other stacking cell at MAF to start assembly of the aft join.

As the first stage comes together, major construction of the second Core Stage is now beginning with propellant tank welding set to begin shortly.

Top half of the rocket assembled

“Forward join is structurally complete,” John Shannon, Boeing’s Vice President and Program Manager for SLS, said in a January 23 interview. Boeing is the prime contractor for the Core Stage.

The three forward join elements have flanges at both ends where structural rings are integrated into the structure and provide a mating surface to join each pair of elements. 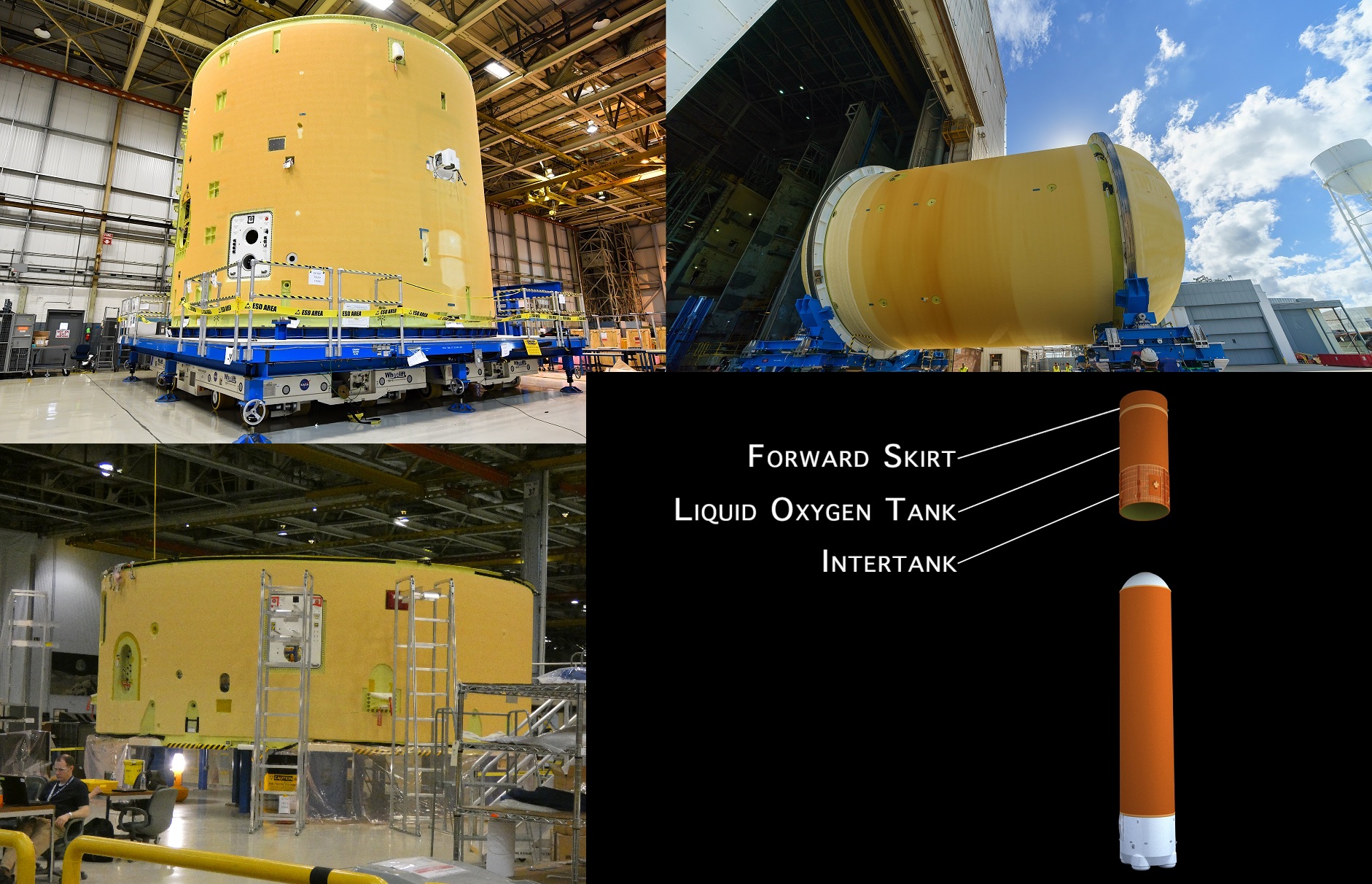 SLS Core Stage forward join elements prior to their assembly. Clockwise from the top left: the intertank, the liquid oxygen tank, a graphic showing their positions in the stage, and the forward skirt. NASA was unable to release any new imagery during its recent shutdown. Credit: NASA/Eric Bordelon (top left), NASA/Jude Guidry (top right), Philip Sloss for NSF/L2 (bottom left), NASA (bottom right).

“The team is working on the wire harnesses that run between the different elements and that will go through the systems tunnel,” Shannon added. “It’s an awe-inspiring sight. It’s really gratifying to see it all come together.”

SLS Core Stage production was one of the activities that were allowed to continue while NASA was essentially closed for five weeks by the partial U.S. government shutdown. Completing assembly of the first Core Stage, Core Stage-1 (CS-1), is a critical path in the assembly, integration, and test schedule to reach the launch of Exploration Mission-1 (EM-1).

EM-1 is a test flight incorporating the first SLS launch, integration of SLS with NASA human exploration Orion spacecraft, and Orion’s first solo flight that is planned to spend several days in lunar orbit before returning to Earth.

Stacking work is done in Cell A and Cell D in the Vertical Assembly Building (VAB) at MAF, Building 110.  The intertank was shuffled in and out of the renovated Cell D in the Fall; final prep work on the LOX tank delayed the forward join, and Boeing and NASA took the opportunity to stack the LH2 structural test article (STA) from late October through early December.

By the time the LH2 STA rolled out of the VAB at Michoud on December 14 for a barge trip up to the Marshall Space Flight Center in Alabama, the intertank was set up back in Cell D and ready for stacking.  Over the holidays, the LOX tank was moved into the VAB at MAF, lifted up into Cell D and put on top of the intertank, so the two pieces could be bolted together.

Three-hundred and sixty bolts at one-degree intervals around the circumference hold each flange together. The bottom flange of the LOX tank was bolted to the top one on the intertank.

On the left, an image of one of the rings or “flanges” on the liquid hydrogen tank that are bolted together to join the stage elements. On the right is a similar, complete bolted flange from a Space Shuttle External Tank. Credit: NASA/Steven Seipel (left), Philip Sloss for NSF/L2 (right).

“We retired an enormous amount of program risk when we put [them together],” Shannon explained. “This is the first time we’ve stacked real flight elements to real flight elements and you know we’ve done white light scans and 3-D CAD (Computer Aided Design) characterization and we measured it like crazy and when we put the LOX tank on the intertank it fit perfectly, there were just no issues at all.”

“The same with the forward skirt, it was just as slick an operation as you could possibly imagine,” he added.  With the three elements mated structurally and wiring connections being attached, the next major step in the forward join is to install the top part of the LOX feedlines that will deliver the oxidizer from the top of the stage to the engines at the bottom.

“We mount two very large S-ducts coming out of the bottom of that LOX tank and then they’ll exit through the intertank to form the very upper part of the downcomers that bring the liquid oxygen down to [the] engine section,” Shannon explained. He said the team was planning to start the installation over this past weekend or early this week. 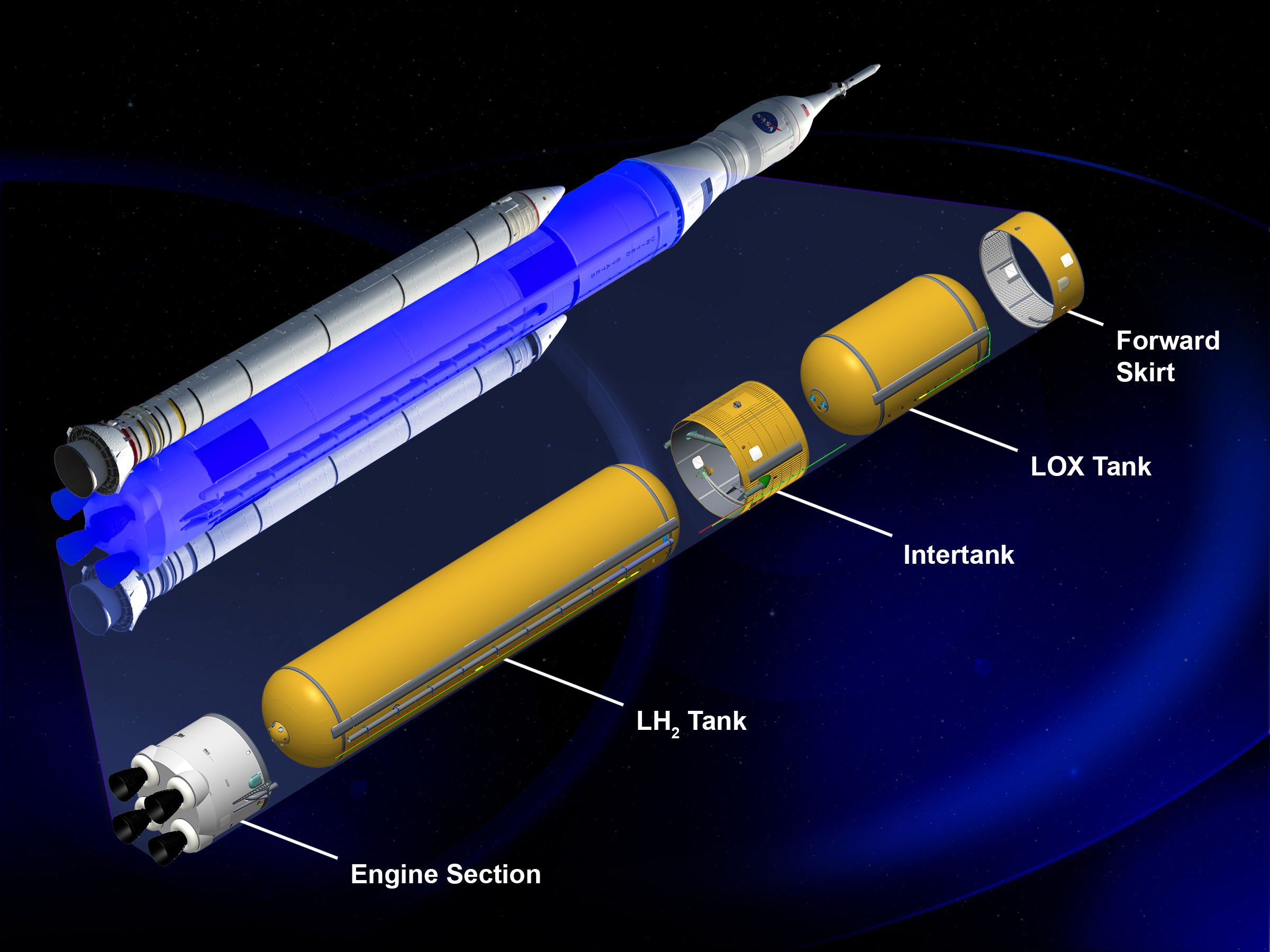 Left open for mating, the areas around each of the completed flanges will soon be sprayed with spray-on foam insulation (SOFI) to provide thermal protection.  The foam “closeouts” of the bolted flanges will be manually sprayed by technicians while the top part of the stage remains in Cell D.

Even without its engines installed, an assembled Core Stage is too long to stack vertically in one place at MAF, so they will be vertically assembled into two half-stages first before the whole stage is finally connected while horizontal in the nearby Final Assembly area of Building 103.

The pacing item in overall assembly, integration, and testing for CS-1 is the engine section. The element at the bottom of the stage which has more of everything and most of its moving parts has taken the longest to complete, but Shannon said they’re continuing to get closer to that milestone.

“We’re doing really well on that, working through our final wire harness installations and checkouts,” Shannon said. “The engine section has more wiring and instrumentation in it than any other element so we’re taking advantages of the lessons we learned in doing the forward skirt and the intertank.”

“Tubing is just about completed in it,” he added. “As far as major structure left the four LH2 feedlines that go to the engines are left to be installed.” 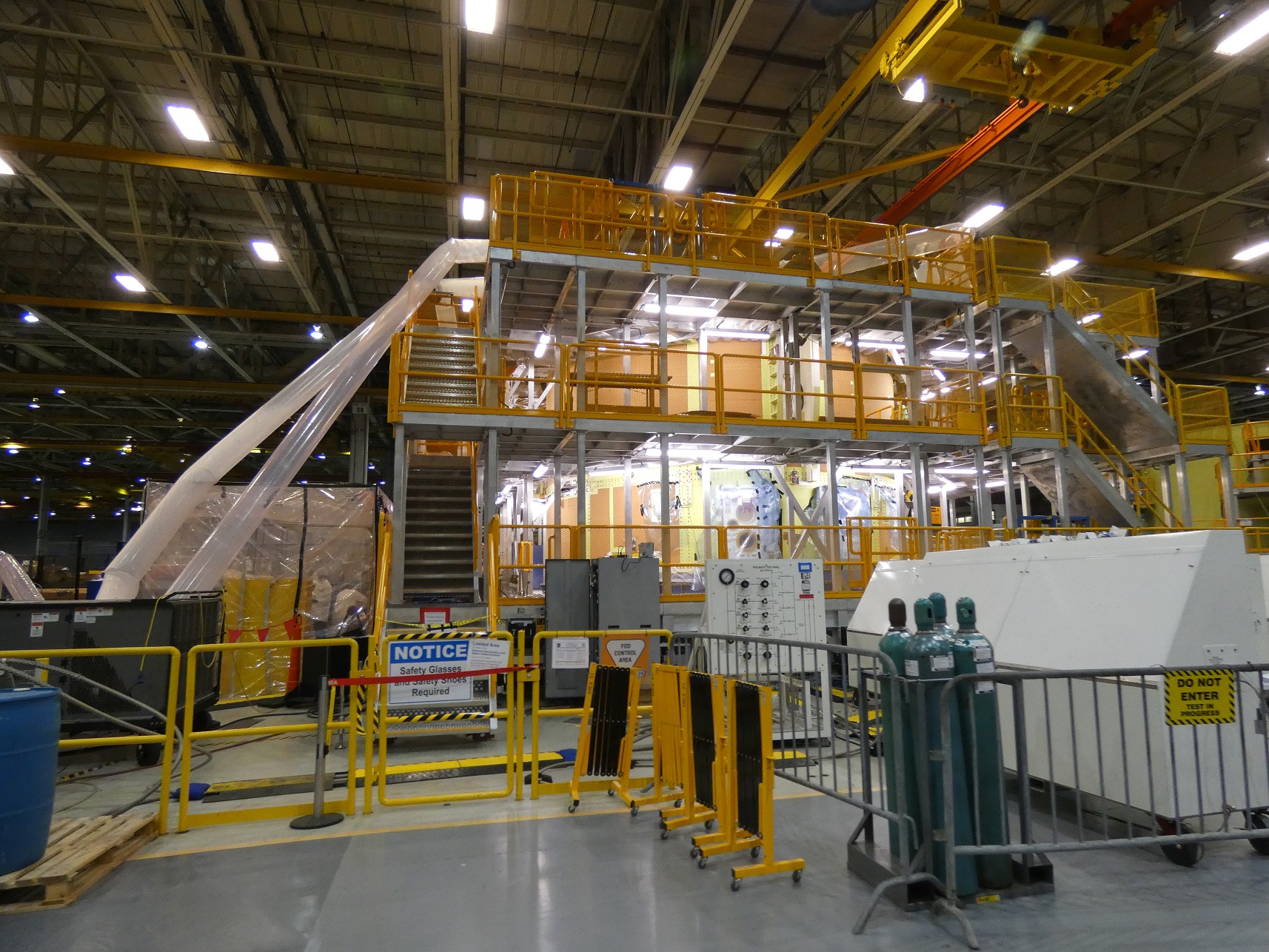 Core Stage-1 engine section in its integration area at MAF in August, 2018. An environmentally-controlled work area will be maintained on the inside of the element until its integration is complete. Credit: Philip Sloss for NSF/L2.

“They’re staged outside of the engine section. We don’t want to put those in [yet] because they take up so much space until we finish up the wiring and the tubing. Once that’s complete we’ll be able to put those LH2 lines in.”

The bulk of the remaining work is getting all the wiring harnesses in position and making sure they weren’t damaged going in. “For all the wiring, we’ve done our installations on 105 of 153 of them, for the big wire harnesses,” Shannon noted.

“Those 153 wire harnesses require 5,113 clamps and we’ve installed 4,801 of them, so you can see we’re getting very close to the end of all of that.” Once the wiring runs are clamped into position, they are tested to make sure they’re healthy after install.

“It’s your standard continuity/high-potential checks, where you’re checking insulation and you’re checking copper path,” Shannon explained.  “You’re making sure that as you put wire into these clamps that you didn’t do any damage to the wire, so it’s basically just a functional check of the health of the wire harness itself.”

Core Stage-1 will be outfitted with a significant amount of development flight instrumentation (DFI) and Shannon said that is now being patched into the already-tested engine section wiring. “The way it works is you run the wiring, you do the continuity and high-potential checks, and then you splice in those accelerometers or temperature transducers or whatever it might be into that wiring harness,” he explained.

“There’s a grand total of about 500 splices that have to be done for that development flight instrumentation and we’re probably about 150 into that splicing, so a lot of wire activity is going on, very fine, detailed work that we have to do to finish out that element.”

Shannon said the liquid oxygen propellant lines are essentially all installed. “It’s the downcomer coming down the side and going into the engine section and there’s a Y-duct to split the flow from each of the two downcomers, since we have four engines. Then at the end of that Y-duct split is a prevalve, just like we had on the Space Shuttle, and then going down from that prevalve is the LOX feedline to each engine and that’s completed on both sides.”

“There’s a crossover duct which runs almost the semicircle halfway around the engine section that equalizes the pressure between those two Y-ducts and we had one section out of that so that we could get to the final tubing and wiring,” he added. “It’s already been checked in there and fits fine, so it’ll be a simple operation. It’ll be just whenever we finish the wiring and tubing.” 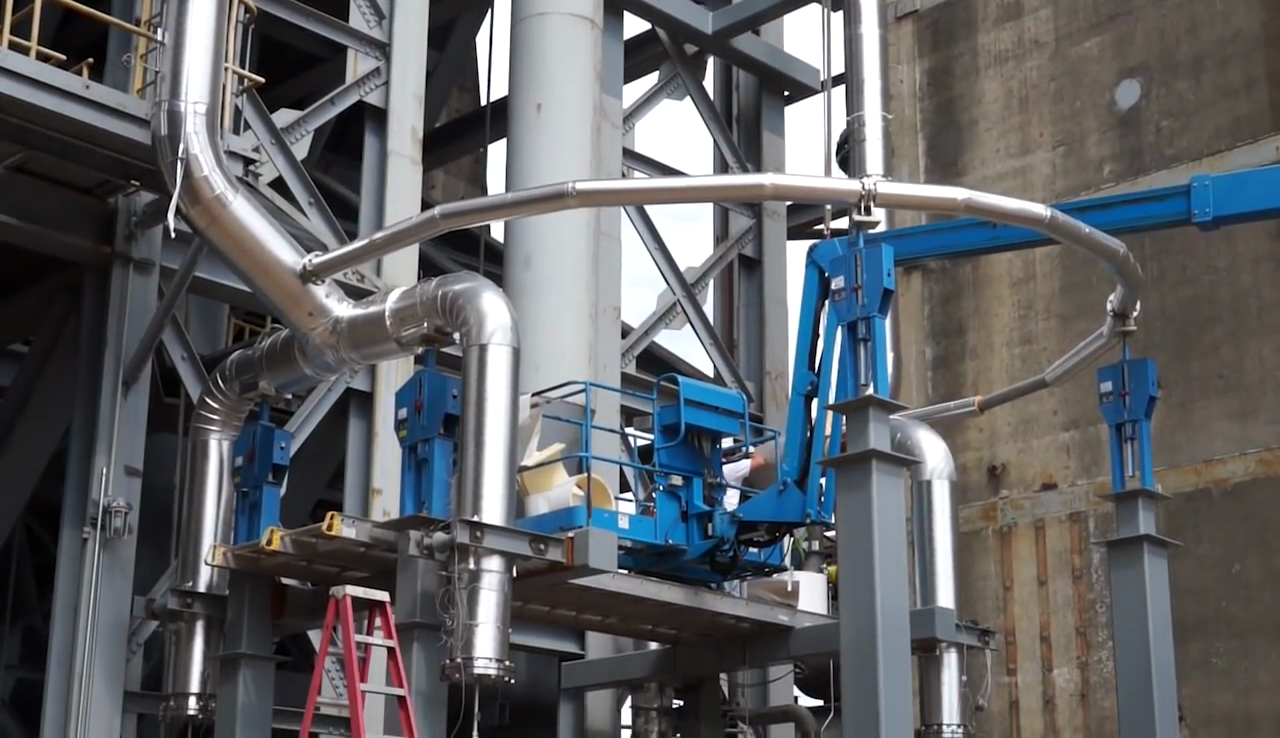 The bottom end of a replica of the Core Stage LOX feed system used for anti-geyser testing at the Marshall Space Flight Center in 2014-2015, showing the semi-circular crossover line that runs between the two LOX feedlines that enter the engine section. One section of the flight crossover line is the only remaining part of the LOX system to install. Credit: NASA.

Completion of engine section integration will be a big milestone, but it also leads straight into the aft join sequence to assemble the bottom half of the rocket.

“It is kind of a rolling wave of work, because once the engine section work is done, then we integrate with the boattail and there’s a lot of the wires and tubes that go across the interface between the engine section and the boattail,” Shannon said. “We’ll take it over to Cell A to integrate it with the boattail, and that’ll be a couple months of doing not just the structural mate, but the tubes and running the wires and getting that all squared away with the TPS (Thermal Protection System) as well.”

“Then we’ll bring the LH2 tank in and mate it with that stack, engine section-boattail in Cell A.”