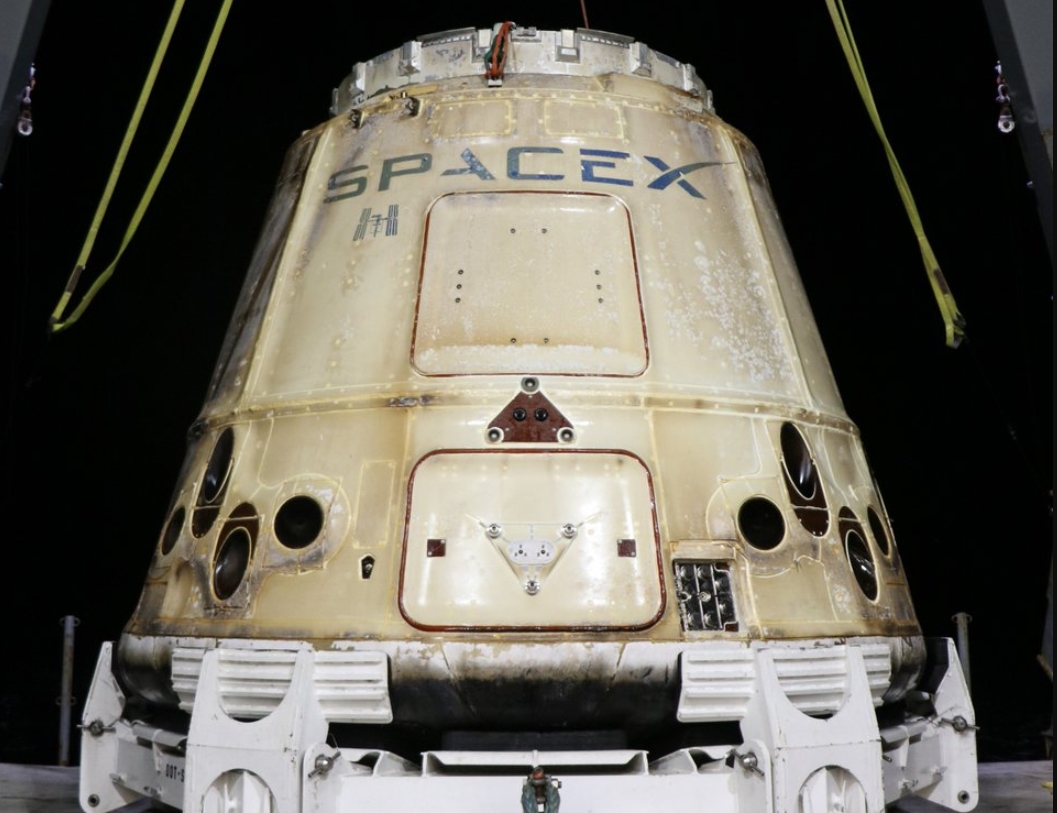 SpaceX’s CRS-16 Dragon spacecraft has concluded the EOM (End Of Mission) phase of her mission following unberthing from the International Space Station (ISS) on Sunday. Dragon’s release from the Space Station Remote Manipulator System (SSRMS) occurred at 23:33 UTC, with splashdown in the Pacific Ocean expected around 05:10 UTC on Monday.

The conclusion to Dragon’s mission was expected earlier in the week. However, ISS managers opted to delay the EOM events to Sunday, due to poor weather conditions in the splashdown zone.

The CRS-16 Dragon was launched on Falcon 9 B1050.1 back in December. The launch was successful, however the booster failed to land at Cape Canaveral’s LZ-1 due to a grid fin system failure that saw the stage lose control after the entry burn.

Falcon 9 performs successful abort from RTLS to ocean splashdown after sending upper stage & Dragon on their way to ISS.

This is why @SpaceX flies this trajectory… intentionally aiming for water. Until today, we could only talk about it in theory. Hats off @elonmusk & co. pic.twitter.com/7axDmjF22y

Despite the spin, the booster still managed to abort to a water landing and was towed back to Port Canaveral a few days later. It is not clear if the booster will fly again, but it’s unlikely it will be refurbished for a customer flight. Elon Musk did intimate it might be used on an internal test flight of some sorts in the future.

The capsule contains 1,598 kilograms (3,523 lb) of cargo to be unloaded by the astronauts aboard the space station, while the trunk carries additional payloads for attachment to the outside of the ISS and houses critical vehicle systems including Dragon’s two solar arrays. The capsule is the only part of Dragon that is recovered; the trunk is jettisoned and burns up when it reenters Earth’s atmosphere.

Once Dragon arrived at the ISS, the spacecraft provided a multitude of payloads, with pressurized cargo including 304 kilograms (670 lb) of provisions for the crew, 191 kilograms (421 lb) of hardware for the US and international segments of the station and 11 kilograms (24 lb) for the Russian segment, 40 kilograms (88 lb) of computer equipment, 15 kilograms (33 lb) of hardware to support spacewalks and 1,037 kilograms (2,286 lb) of scientific equipment and new experiments.

In the Dragon’s Trunk were two payloads to be mounted to the outside of the space station. The Global Ecosystem Dynamics Investigation (GEDI) will use laser ranging to study the three-dimensional structure of features on the Earth’s surface such as forests, snowpacks and glaciers. GEDI consists of a LIDAR instrument which will use the reflection of light pulses to build up a profile of surface elevations. The instrument was mounted on the Exposed Facility (JEM-EF) of the Japanese Experiment Module, Kibo.

Ahead of the return trip, Dragon was packed with downmass and the hatch closed. Robotic ground controllers then used the robotic arm to detach Dragon from the Earth-facing port of the Harmony module to maneuver Dragon into the release position.

Dragon was released from the SSRMS at 23:33 UTC.

Once the LEE snares were released, the SSRMS was backed away from Dragon as the craft held its position at the 10 meter mark.

As Dragon pushes down the R-Bar, the largest of the three thruster departure burns imparts enough Delta Velocity (Delta-V) change to Dragon to push it outside of the approach ellipsoid.

This includes the closure of the Guidance Navigation and Control (GNC) bay door on Dragon, creating a perfect thermal protection seal around the entirety of Dragon for entry.

SpaceX flight controllers at Hawthorne, California commanded Dragon’s Draco thrusters to fire for 12 minutes and 53 seconds – retrograde – in the deorbit burn that enabled Dragon to slip out of orbit for its descent back to Earth.

Once EI occurred, Dragon’s Thermal Protection System (TPS) protects it from the searing hot temperatures of reentry formed as the air molecules around Dragon are instantly heated and turned to plasma under the friction created by Dragon’s high velocity.

Fast recovery vessels deploy to begin collecting Dragon’s parachutes as recovery of the capsule itself will be conducted by the primary recovery assets.

Dragon’s parachute-assisted splashdown usually occurs 410 miles southwest of Long Beach, California. However, the splashdown zone was moved further south for this return. It will take about two days for Dragon to be brought back to the Port of Los Angeles for its cache of cargo and scientific experiments to be unloaded.

CRS-17 is the next Dragon mission to the ISS, currently scheduled for March.

SpaceX gearing up for Starship tests at Boca Chica