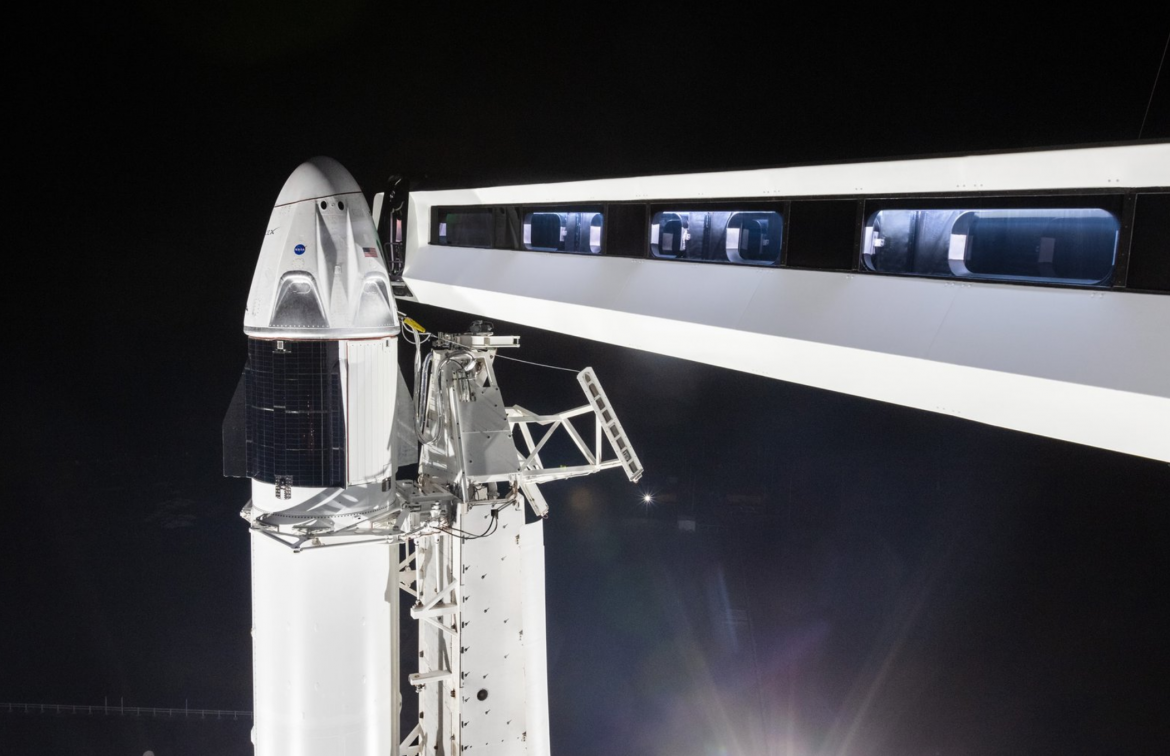 The SpaceX Falcon 9 and Crew Dragon capsule which will execute the Demonstration Mission-1 (DM-1) test flight have rolled out to Pad 39A for fit checks ahead of launch. The rollout is a strong indicator that SpaceX is nearly ready to perform the much anticipated DM-1 mission – an uncrewed certification flight for NASA’s Commercial Crew Program.

The flight will be the first for SpaceX’s Crew Dragon aboard the Falcon 9 launch vehicle. Consequently, SpaceX has decided to perform additional fit checks with the fully integrated stack prior to launch.

Preparations for the rollout began during the first half of December, with the Crew Dragon capsule being moved to the Horizontal Integration Facility (HIF) at Pad 39A for integration with the Falcon 9 launch vehicle.

On December 20th, the Transporter Erector (T/E) – used to both transport and launch the rocket – went horizontal after picking up the reaction frame at the base of the launch pad. This is one of the final steps required before the rocket is integrated with the T/E for transport to the launch pad.

Over the holiday period, the integration occurred with the Falcon 9 and Crew Dragon capsule being mated to the T/E inside of the HIF.

Finally, Thursday saw the fully integrated stack rollout to Pad 39A for the first time.

While the exact nature of the fit checks are not known, they will likely involve the new hardware which has been added to support Crew Dragon.

Most notably, the Crew Access Arm was outfitted to the pad’s Fixed Service Structure earlier this fall. The Crew Access Arm is similar to a jetway at an airport – providing crews with an entrance to the vehicle.

The new CAA on 39A – from Nathan Baker for NSF

The tip of the T/E which is used for Dragon missions has also been modified. The new hardware is designed to allow for clearance with the Crew Access Arm.

Additionally, it is understood that the rollout is a dry simulation and thus will not include any propellant. However, a static fire test including propellant load and a short burn of the first stage’s nine Merlin engines will occur at a later date.

While this week’s rollout and subsequent fit checks do not seem to have been impacted by the ongoing U.S. government shutdown, other aspects of the launch campaign will be delayed.

The launch is expected to slip past the latest official no-earlier than launch date of January 17th. Many aspects of the launch campaign require NASA oversight and thus cannot proceed without NASA’s approval.

It is understood that each additional day of the government shutdown translates into about a one day delay with the launch.

The DM-1 launch will feature the first stage B1051 – a brand new Block 5 Falcon 9 with upgraded composite overwrapped pressure vessels (COPVs). The rocket’s second stage will also include the upgrade.

DM-1 during launch, as envisioned by Nathan Koga for NSF

Barring significant delays, DM-1 will become the second launch to sport the upgraded COPVs in both stages – with the first being GPS III SV01 in December, 2018.

The enhanced COPVs are designed to improve safety over the previous version which was blamed for the AMOS-6 explosion in 2016.

Unlike other crewed launch vehicles such as the Space Shuttle, SpaceX will load the propellant after loading crew in a process known as load and go. Therefore, it is especially important to avoid any incidents during the fueling process.

The DM-1 mission will also be the first time a Dragon will perform a docking with the International Space Station. Previously, cargo Dragons have been captured and berthed by the robotic Canadarm2. However, Crew Dragon will autonomously dock and undock with the Station.

While in space, SpaceX will use their new Boca Chica tracking site to monitor Crew Dragon. The site features two tracking dishes which SpaceX took over from NASA. Boca Chica was recently used to track the Falcon 9’s second stage during the GPS III SV01 mission, a sign that the tracking station is ready for the DM-1 launch.

Following a two week stay at the Space Station, Crew Dragon spacecraft is expected to splash down in the Atlantic Ocean. This will be the first time that SpaceX has landed a capsule on the east coast. In the past, the Dragons have landed in the Pacific.

The Crew Dragon capsule will be recovered by SpaceX’s GO Searcher vessel, which has recently undergone upgrades to prepare it for Crew Dragon recoveries.

The recovery process during DM-1 will be critically important, with the Crew Dragon vehicle needing to be reflown again during the subsequent in-flight abort test. How quickly the capsule can be refurbished after a dip in the corrosive salt water is seen as one of the critical path elements for SpaceX’s certification for crewed flight.

The in-flight abort test will see a Falcon 9 and a dummy second stage launch the Crew Dragon capsule. Crew Dragon will then perform an abort maneuver during first stage flight – demonstrating a critical crew safety feature.

The abort test must occur before SpaceX’s crewed DM-2 test flight. DM-2 is currently scheduled to occur no earlier than this summer.