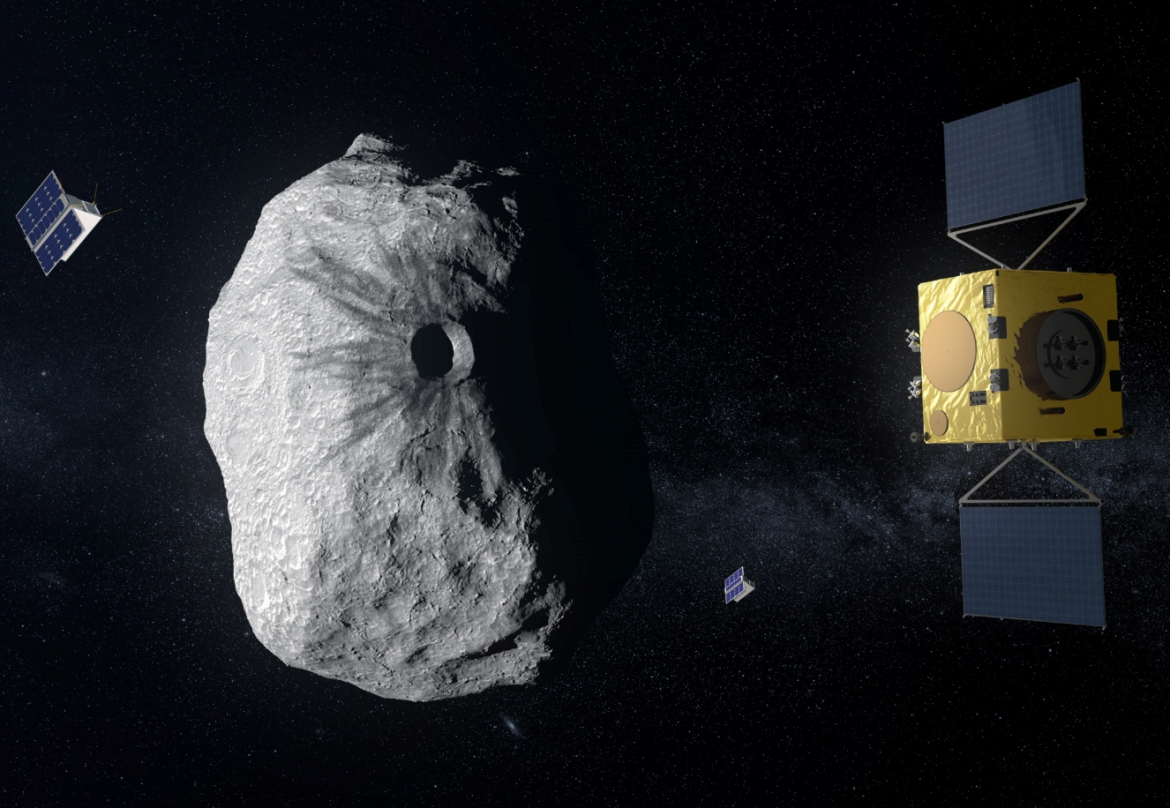 An international planetary defense mission involving NASA and ESA will now include two CubeSats. APEX (Asteroid Prospection Explorer) and Juventas will ride with ESA’s Hera spacecraft, which is set to arrive at the Didymos binary asteroid system shortly after NASA’s DART (Double Asteroid Redirect Test) spacecraft has impacted the smaller of the two objects, Didymoon. Hera will arrive to take observations of the DART aftermath as part of the international Asteroid Impact Deflection Assessment (AIDA) experiment.

DART and Hera were conceived together as part of the AIDA objectives. Although parts of the mission have been refined over the years, mainly due to funding challenges, a key mission goal is to combine the DART and Hera missions for overall scientific and technological return while protecting the international cooperation element that will be in play should a real-life scenario – currently reserved for Hollywood movies – calls for options to protect the planet from an asteroid strike.

As opposed to the need to fly Bruce Willis and a ragtag team of deepsea drillers, the saviors of the planet will be robotic spacecraft.

To test potential techniques in “deflecting” an asteroid – one of the preferred methods for mitigating a threat – DART will travel to the Didymos binary asteroid system via its a xenon-based electric propulsion system, steering with an onboard camera and sophisticated autonomous navigation software.

Upon reaching Didymos – currently claimed to be in October 2022 – it will steer itself into Didymoon at a speed of approximately 6 km/s. The last thing DART will transmit back to Earth in advance of the collision will a close-up of Didymoon’s surface features. 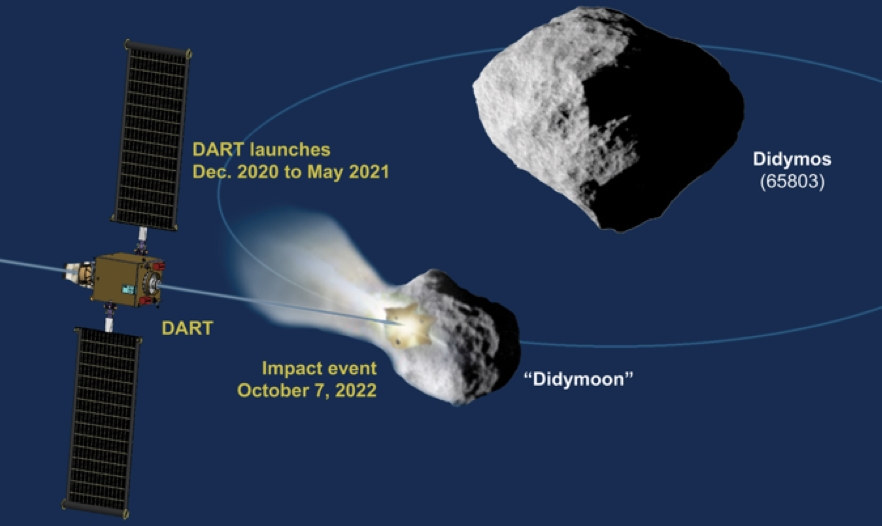 The DART mission – via NASA

The collision will change the speed of the moonlet in its orbit around the main body by a fraction of one percent, enough to be measured using telescopes on Earth. However, Hera will get a close-up up view when it arrives a few years later.

Hera – named after the Greek goddess of marriage – is the European contribution to an international double-spacecraft mission, following up on DART with a detailed post-impact survey that will turn this grand-scale experiment into a well-understood and repeatable planetary defence technique.

While doing so, Hera will also demonstrate multiple novel technologies, such as autonomous navigation around the asteroid – like modern driverless cars on Earth, and gather crucial scientific data, to help scientists and future mission planners better understand asteroid compositions and structures.

Due to launch in 2023, Hera will travel to the pair of near-Earth asteroids. The 780 m-diameter mountain-sized main body is orbited by a 160 m moon, informally called ‘Didymoon’, about the same size as the Great Pyramid of Giza.

Although the mission still requires a final green light from the Agency’s Council of Ministers at European Level in late 2019 (ESA’s Space19+  meeting), Monday saw ESA announce Hera will carry two tiny CubeSats for deployment around – and eventual landing on – the Didymos asteroids. The announcement comes after the Hera mission received proposals for CubeSats from across Europe, and an evaluation board has now made the final selection.

CubeSats became some of the unexpected stars of the recent NASA landing on Mars, with the InSight Lander. The two MarCO CubeSats performed admirably, relaying crucial information as InSight conducted its successful EDL (Entry, Descent and Landing).

“The idea of building CubeSats for deep space is relatively new, but was recently validated by NASA’s InSight landing on Mars last November, when a pair of accompanying CubeSats succeeded in relaying the lander’s radio signals back to Earth – as well as returning imagery of the Red Planet,” noted Paolo Martino, Hera spacecraft lead engineer.

The first CubeSat companion is called the Asteroid Prospection Explorer (or ‘APEX’), and was developed by a Swedish/Finnish/Czech/German consortium.

It will perform detailed spectral measurements of both asteroids’ surfaces – measuring the sunlight reflected by Didymos and breaking down its various colors to discover how these asteroids have interacted with the space environment, pinpointing any differences in composition between the two. In addition, APEX will make magnetic readings that will give insight into their interior structure of these bodies.

APEX and JUVENTAS – via ESA

Guided by a navigation camera and a ‘laser radar’ (lidar) instrument, APEX will also make a landing on one of the asteroids, gathering valuable data in the process using inertial sensors, and going on to perform close-up observations of the asteroid’s surface material.

In close orbit around Didymoon, Juventas will line up with Hera to perform satellite-to-satellite radio-science experiments and carry out a low-frequency radar survey of the asteroid interior, similar to performing a detailed ‘X-ray scan’ of Didymoon to unveil its interior.

Hera is set to be launched on an upcoming Ariane 6 mission, one of the first science missions to be utilizing Arianespace’s new rocket. The mission will end with a landing, using the dynamics of any likely bouncing to capture details of the asteroid’s surface material – followed by several days of surface operations.

Hera is set to be humankind’s first mission to a binary asteroid system. As well as testing technologies in deep space and gathering crucial science data, Hera is designed to be Europe’s contribution to an international planetary defence effort: it would survey the crater and measure orbital deviation of Didymoon caused  by the earlier collision of a NASA probe, called DART. 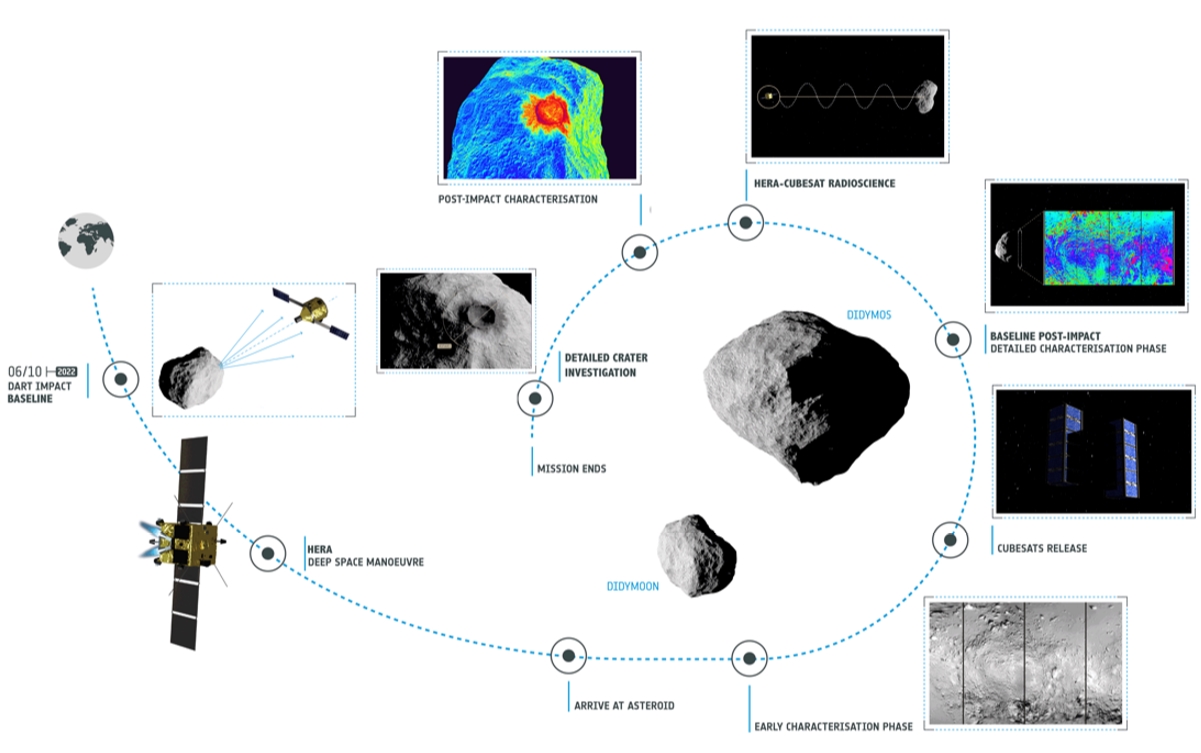 This unique experiment will validate the asteroid deflection technique referred to as kinetic impactor, enabling humankind to protect our planet from asteroid impacts.

“Carrying added instruments and venturing much closer to our target bodies, they will give different perspectives and complementary investigations on this exotic binary asteroid. They will also give us valuable experience of close proximity operations relayed by the Hera mothercraft in extreme low-gravity conditions. This will be very valuable to many future missions.”