PSLV launches debut orbital platform use of the fourth stage 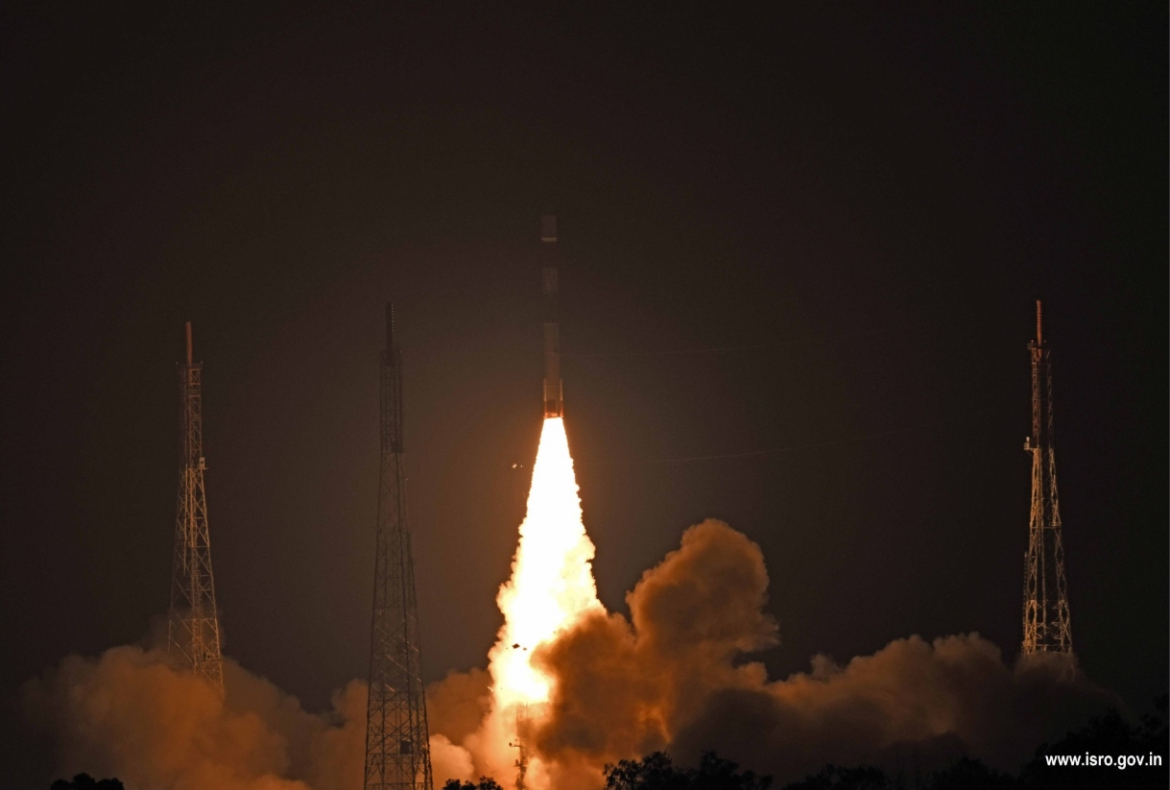 India’s Polar Satellite Launch Vehicle deployed a military reconnaissance satellite and carried out a technology demonstration mission Thursday, flying in a new configuration and testing its upper stage as an experimental satellite platform. PSLV lifted off from the Satish Dhawan Space Centre at 23:38 local time (18:07 UTC).

Thursday’s launch, the forty-sixth overall for the Polar Satellite Launch Vehicle (PSLV), marked the maiden flight of the rocket’s new PSLV-DL configuration. Filling a gap in payload capacity between two of the rocket’s existing configuration, the PSLV-DL will help reduce the cost of India’s access to space. Its first payload consists of a demonstration satellite built around the rocket’s upper stage, testing this concept for future applications, and a military spacecraft with an imaging payload.

The PSLV that performed Thursday’s launch was vehicle number C44. PSLV was developed by the Indian Space Research Organisation (ISRO) and first flew in September 1993. It was the third rocket that ISRO developed to launch satellites, following on from the earlier Satellite Launch Vehicle (SLV) and Augmented Satellite Launch Vehicle (ASLV). The four-stage rocket uses a mixture of solid and liquid-fuelled propulsion.

The name Polar Satellite Launch Vehicle reflects that the rocket was originally designed for missions to near-polar sun-synchronous orbits, commonly used for Earth observation and low Earth orbit scientific satellites as well as for many other missions. Despite this PSLV has frequently been used to deploy spacecraft to other orbits, including geosynchronous communications, weather and navigation satellites and probes bound for the Moon and Mars.

Prior to Thursday’s introduction of the PSLV-DL, the PSLV has flown in three different configurations. All of these have the same four stages at their core, varying the boosters that are strapped to the first stage of the vehicle. PSLV’s first stage, the PS1, uses an S-138 solid rocket motor. The liquid-fuelled second stage, known as PS2 or L-40, is powered by a Vikas-4B engine. Another solid motor, an S-7, comprises the third stage or HPS3. The rocket’s fourth stage – PS4 or L-2.5 – has two restartable liquid-fuelled engines for precise orbital insertion. 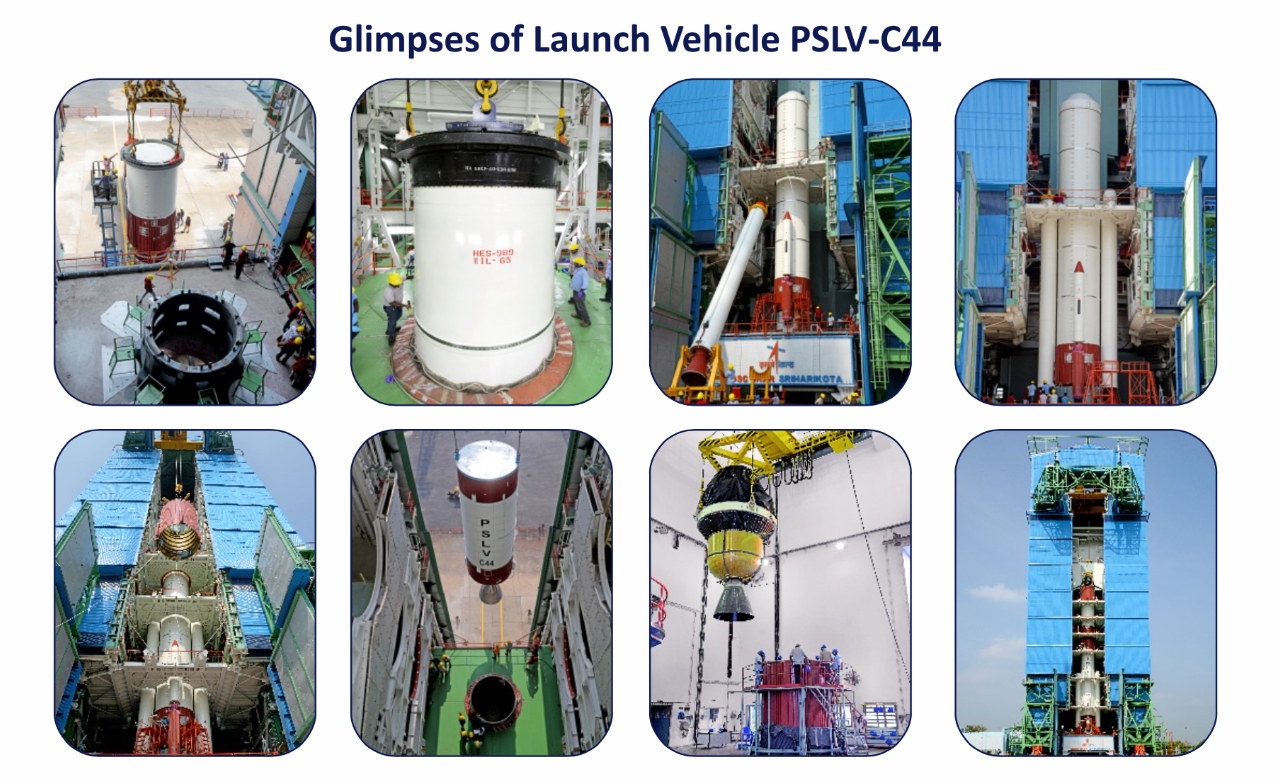 This combination of stages has been standardized since the early 2000s. For the first few launches, developmental versions of PSLV had used smaller versions of the first, second and fourth stages: S-125, L-37.5 and L-2 respectively.

The original PSLV configuration – now known as the PSLV-G – also used six PS0M strap-on boosters. These were based on the first stage of the SLV and first two stages of the ASLV. On a typical mission, four boosters would ignite on the ground with the remaining two igniting 25 seconds after liftoff. In April 2007, ISRO introduced the PSLV-CA, or Core Alone, which omits the boosters to deliver smaller payloads to orbit at a lower cost.

The third PSLV configuration is the PSLV-XL, which was first used in the October 2008 launch of India’s first Lunar probe, Chandrayaan-1. This uses six stretched PS0M-XL boosters with S-12 motors in place of the PS0Ms, increasing the rocket’s ability to carry heavier payloads to higher orbits. To reduce production costs, ISRO is now standardizing on these more powerful boosters, although it is unclear if the PSLV-G still has any flights remaining before it is retired: it last flew in September 2016.

The PSLV-DL uses the same core vehicle as the PSLV-G, CA and XL. However, two PS0M-XL motors are attached to the first stage and will ignite at liftoff. This gives the PSLV-DL a payload capacity between that of the unaugmented PSLV-CA and the PSLV-XL with its six boosters, accommodating some of the payloads that would previously have used the PSLV-G configuration or would have required an XL if this was not available.

In its forty-five flights to date, PSLV has flown twelve times in the PSLV-G configuration, thirteen times as a PSLV-CA, and twenty times as a PSLV-XL. Forty-two of the rocket’s launches have been successful: the maiden flight failed to reach orbit after a guidance malfunction caused the rocket to go off course and the first operational launch in 1997 reached a lower-than-planned orbit although its payload, IRS-1D, was still able to complete its mission. PSLV’s most recent failure came in August 2017 – ending a string of 36 consecutive successes – when the rocket’s payload fairing failed to separate from around the IRNSS-1H satellite. PSLV is the most flown and most reliable rocket that ISRO has developed to date.

PSLV can launch from either the First Launch Pad (FLP) or Second Launch Pad (SLP) at the Satish Dhawan Space Centre (SDSC), a launch site on Sriharikota island that was originally named the Sriharikota High Altitude Range (SHAR). 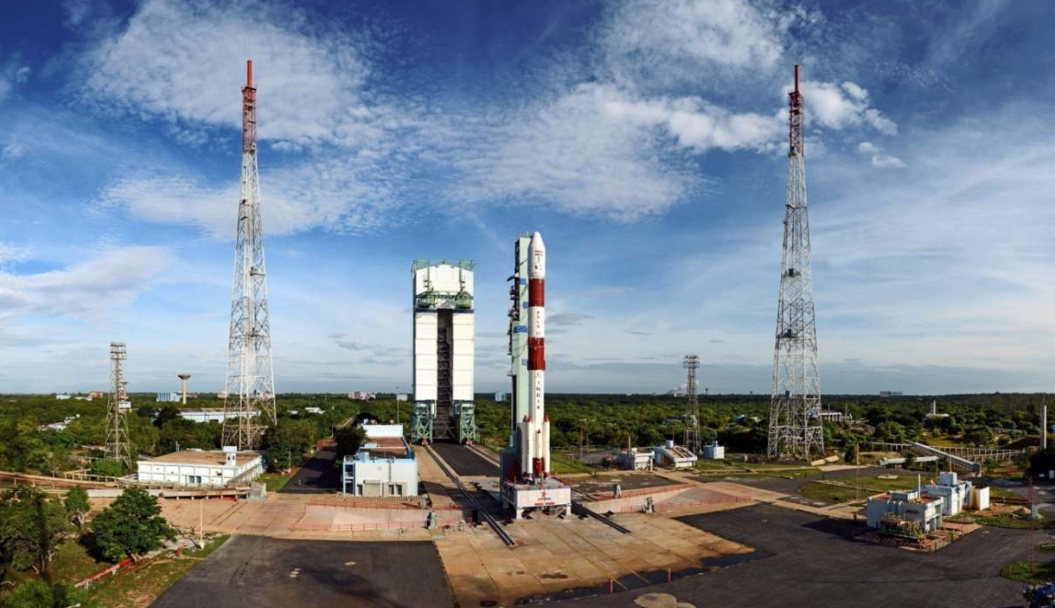 The launch site – via ISRO

The launch site was renamed after former ISRO Chairman Satish Dhawan following his death in 2002. SDSC has been the launch site for all of India’s orbital launches – supporting SLV and ASLV missions from now-disused launch complexes to the south of the modern pads that are shared by PSLV and GSLV. Thursday’s launch, which used the First Launch Pad, was the sixty-ninth orbital launch from the site.

Rockets launched from the First Launch Pad are assembled vertically at the pad, using a mobile service tower to provide access to the vehicle as it is stacked in place. The launch complex is expected to enter a period of renovation in the near future that will see it adopt the same flow as the Second Launch Pad, where rockets are integrated away from the launch pad and transported into position atop a mobile launch platform.

ISRO has stated that the primary objective of Thursday’s launch is to validate the PS4 Orbital Platform, using PSLV’s fourth stage as the basis for small satellites. This concept will be tested by Kalamsat, a student-developed experiment package that is attached to the fourth stage. Thursday’s launch was also used to deploy a military imaging satellite, Microsat-R. 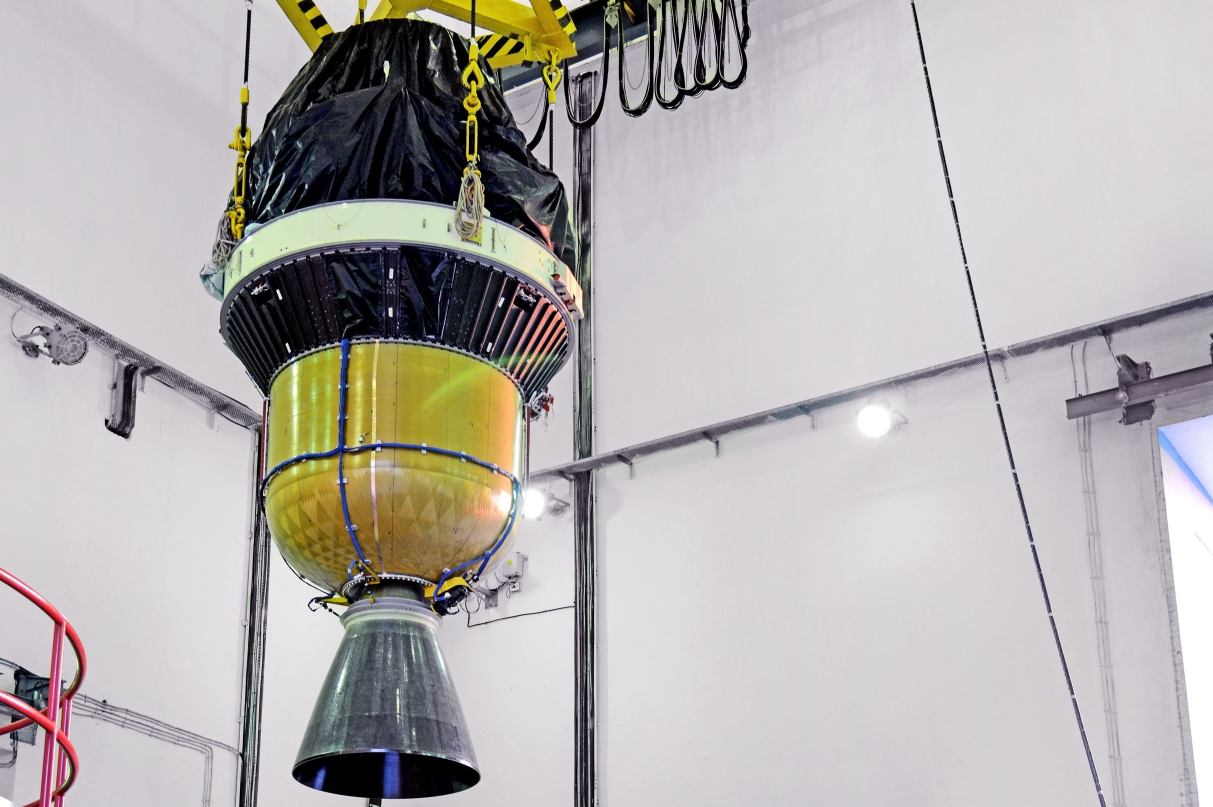 The fourth stage and the payload hidden – via ISRO

Kalamsat was placed into a circular orbit at an altitude of 450 kilometers (280 miles, 243 nautical miles) and an inclination of 98.8 degrees. Powered by batteries housed within the PS4 stage, the satellite is expected to operate for about fifteen hours.

As well as testing the concept of building a satellite around the PS4, this mission will likely continue research that was conducted with the launch of a suborbital Kalamsat aboard a NASA sounding rocket in 2017. Launched aboard a Terrier-Orion rocket from the Wallops Flight Facility, this mission tested a 64-gram (2.3-ounce) spacecraft constructed from 3D-printed carbon fiber polymers.

Microsat-R was built and will be operated by India’s Defence Research and Development Organisation (DRDO). It is a 740-kilogram (1,630 lb) satellite bound for a 274 kilometer (170-mile, 148-nautical-mile) orbit inclined at 96.6 degrees. Operating in a lower orbit than India’s existing reconnaissance satellites, Microsat-R is likely carrying a high-resolution imaging payload for either experimental purposes or operational surveillance. Due to the military nature of its mission, ISRO has made few details of this satellite public.

While Kalamsat is officially the primary payload for the PSLV C44 mission, this may simply be to draw attention away from the Microsat-R spacecraft and its national security objectives. Microsat-R is significantly larger than Kalamsat and is expected to remain in service long after Kalamsat completes operations.

Thursday’s mission began with ignition of the PSLV’s first stage engines at the zero mark in the countdown. The two boosters lit up 0.42 seconds later, and PSLV C44 began its ascent. Climbing out of Sriharikota on an azimuth of 140 degrees, the first major in-flight event occurred about 70 seconds after liftoff when the boosters exhausted their propellant and separated from the rocket. PSLV’s first stage continued burning for another 40 seconds before it too burned out and separated. 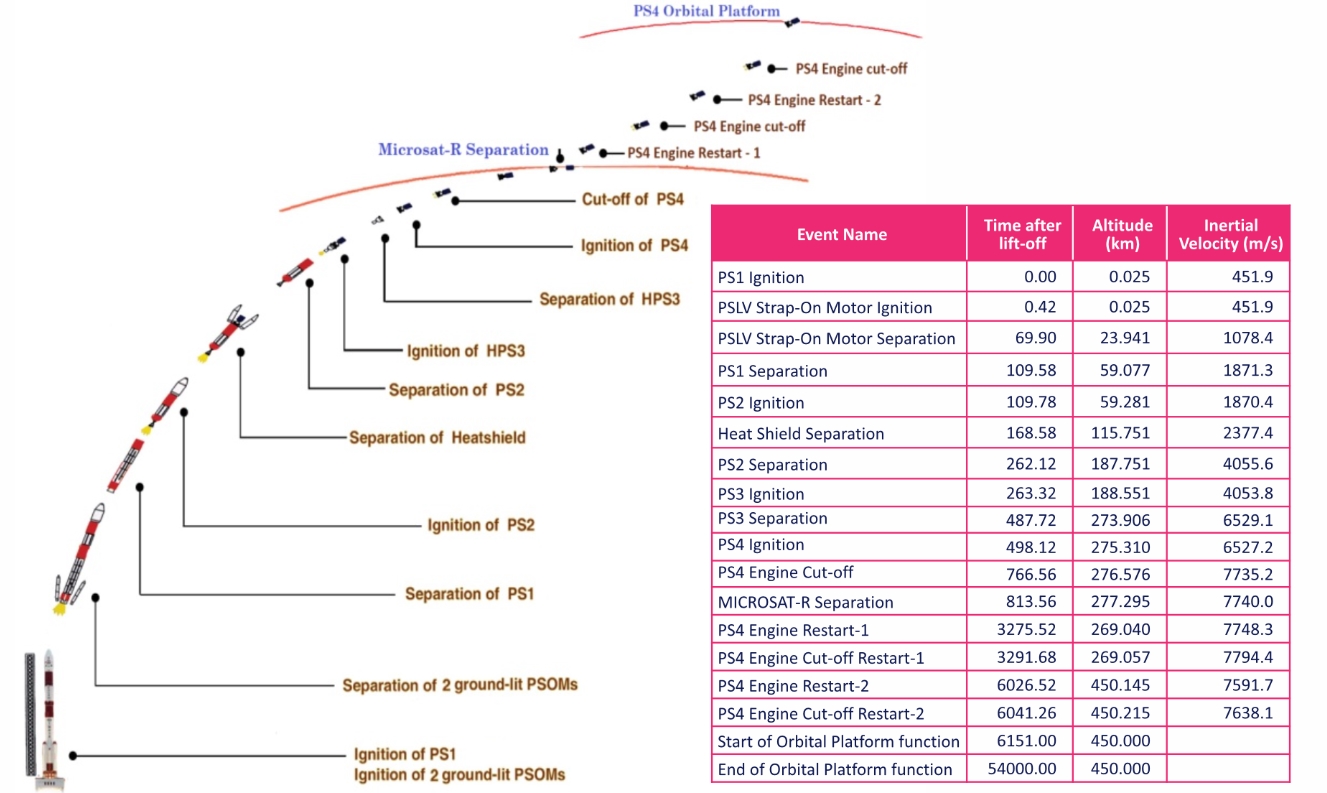 Two tenths of a second after first stage separation, the Vikas engine powering the rocket’s second stage ignited. Vikas is a license-built derivative of the French Viking engine that powered earlier versions of the Ariane rocket, up to the Ariane 4. It burns UH25 – a mixture of unsymmetrical dimethylhydrazine and hydrazine hydrate – oxidized by dinitrogen tetroxide. The second stage fired for two and a half minutes, with separation of PSLV’s payload fairing – termed a heat shield by ISRO – occurring fifty-nine seconds into the burn.

PSLV’s solid-fuelled third stage ignited 1.2 seconds after it separated from the second stage, with its burn lasted about 70 seconds. After third stage burnout the mission entered a coast phase as the rocket climbed towards its trajectory’s highest point, or apogee. After coasting for about two and a half minutes the spent third stage was jettisoned, and the fourth stage ignited about ten seconds after separation for the first of its three planned burns.

This first burn of the upper stage lasted four minutes and 28 seconds, placing Microsat-R into its deployment orbit. Forty-seven seconds after the end of the burn, Microsat-R separated from the PSLV.

Once Microsat-R was released, PSLV C44’s mission entered an extended coast phase for the next 41 minutes and two seconds. Following the coast, a sixteen-second engine burn raised the apogee of the fourth stage’s orbit. The stage remained in this intermediate orbit for 45 minutes and 35 seconds, completing half a revolution around the Earth before restarting again. The final fifteen-second burn circularised the upper stage’s orbit by raising its perigee.

Approximately 110 seconds after cutoff – one hour, 42 minutes and 31 seconds after liftoff – Kalamsat began its investigation. The payload is expected to operate for about thirteen and a quarter hours, running out of power about fifteen hours after liftoff.

Thursday’s launch was the first of 2019 for India, coming five weeks after ISRO’s previous launch saw a GSLV rocket deploy the GSAT-7A satellite successfully. India’s next launch is currently expected sometime in February, with another PSLV deploying the EMISAT electronic surveillance satellite along with a secondary payload of small satellites.