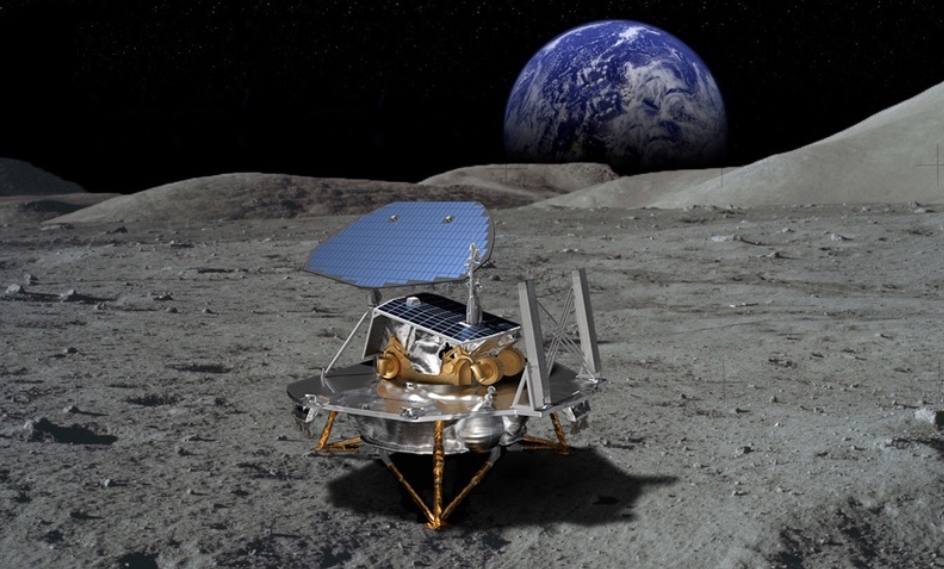 NASA’s vision of returning to the moon is getting clearer. With small, robotic missions en route to the moon and preparing for launch, a new request for proposals reveals NASA’s plans to scale up to human landers.

February saw the launch of SpaceIL’s Beresheet moon lander, the first Israeli spacecraft to attempt a moon landing. NASA and the Israel Space Agency (ISA) agreed to cooperatively utilize the spacecraft last October, including sharing data from the magnetometer experiment on board.

SpaceIL is one of several former Google Lunar XPrize teams that are continuing to work towards moon landings, along with Japanese company ispace and U.S. based Moon Express. 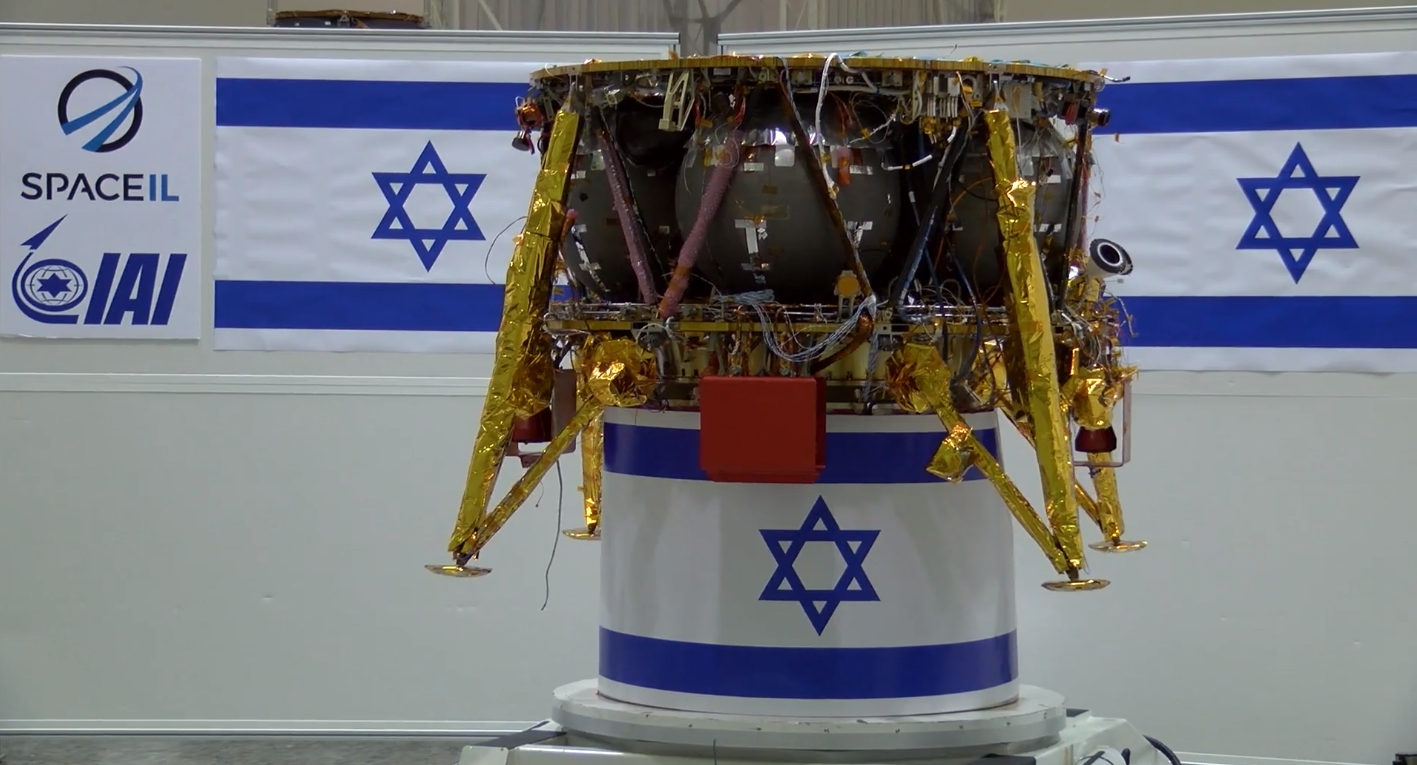 Beresheet during processing – via SpaceIL

In November, NASA selected nine U.S. companies to develop payload delivery systems for robotic lunar missions as part of the Commercial Lunar Payload Services (CLPS) program. The first CLPS delivery task order is expected this year, with the first mission landing on the moon by the end of 2020.

NASA has now selected twelve scientific instruments and technology demonstration payloads that will fly to the Moon aboard these commercial landers. The payloads are under development by multiple NASA facilities, including the Ames, Glenn, Goddard, Johnson, Langley, and Marshall centers. The experiments to fly on the first mission, as early as the end of this year, will be selected after the first CLPS delivery task order.

The scientific instruments selected will investigate a variety of aspects of Earth’s natural satellite. The Linear Energy Transfer Spectrometer will study the lunar surface’s radiation environment, an important factor for future crewed missions.

Three of the selected instruments will perform resource prospecting. The Near-Infared Volatile Spectrometer System will measure surface composition. The other two: the Neutron Spectrometer System and the Advanced Neutron Measurements at the Lunar Surface instrument, will measure the abundance of hydrogen specifically. These missions will aid plans for producing materials from lunar resources, including rocket fuel.

Three more instruments will study the effects of descent and landing on the moon in order to inform future lander designs, including crewed systems.

The Stereo Cameras for Lunar Plume-Surface Studies will study the effects of engine plumes on the lunar surface, while the Surface and Exosphere Alterations by Landers instrument will monitor the effects on the moon’s exosphere. The Navigation Doppler Lidar for Precise Velocity and Range Sensing payload will measure velocity and range during descent for precision landing capability development.

Programs like Beresheet, Lunar CATALYST and CLPS are intended to inform the development of the Human Landing System (HLS), which is now in the request for proposals phase.

As part of the Next Space Technologies for Exploration Partnerships 2 (NextSTEP-2) Broad Agency Announcement (BAA), the new RFP presents the reference architecture to support human missions to the lunar surface. The architecture leverages the Space Launch System (SLS) rocket, Orion spacecraft, and Lunar Gateway. The HLS will be developed by commercial partners, and leverage commercial launchers in addition to SLS. 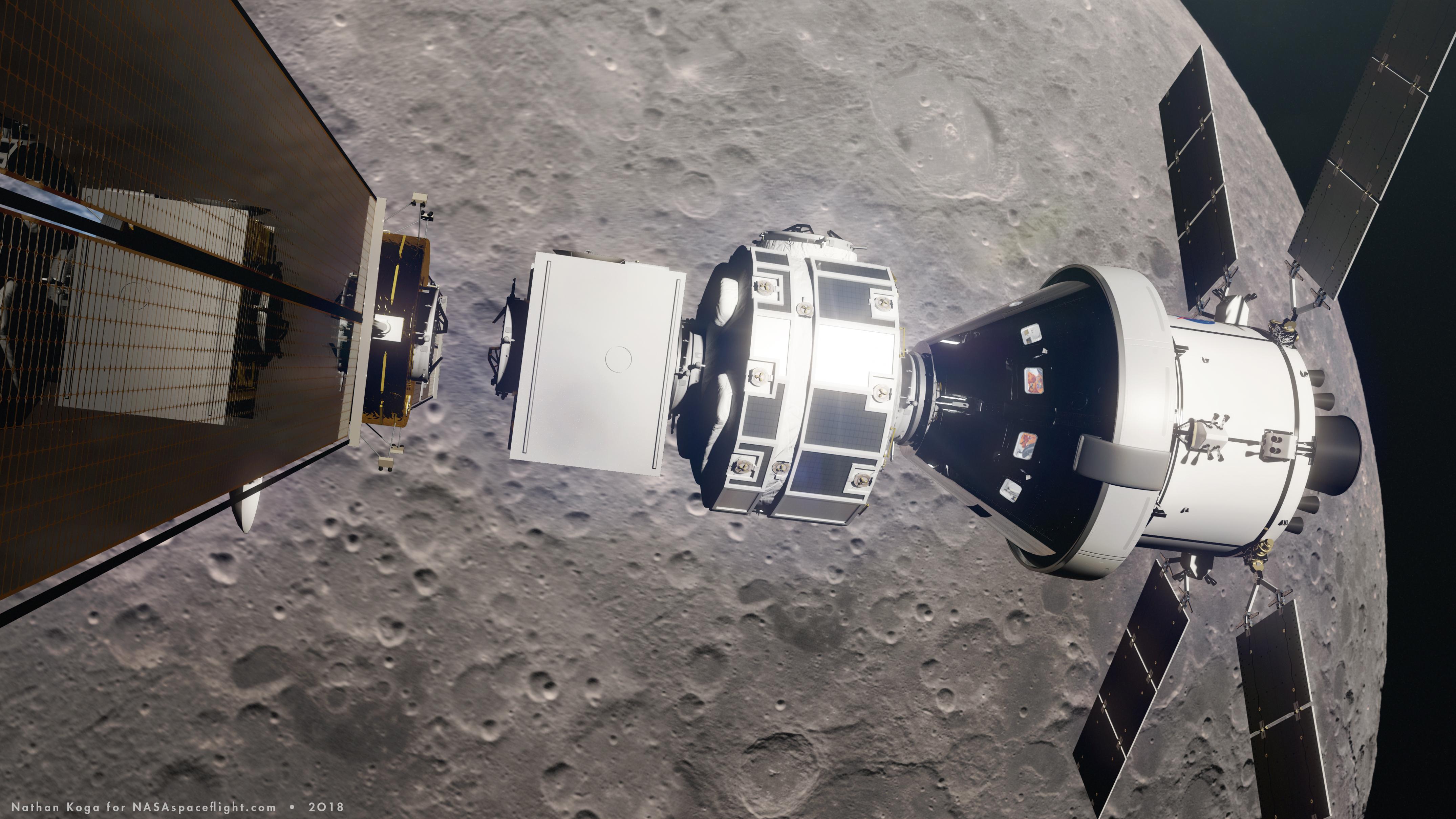 Orion delivers the ESPRIT and U.S. Utilization modules to the Lunar Gateway – via Nathan Koga for NSF/L2

Demonstration of the notional HLS reference architecture begins in 2024 with the launch of the descent element, aboard a commercial rocket, to the Lunar Gateway.

The descent element will transfer from the Gateway’s Near Rectilinear Halo Orbit (NRHO), a highly elliptical orbit, to a 100 km altitude Low Lunar Orbit (LLO) before proceeding to the surface, uncrewed. The descent element demonstrated on this mission is intended to be capable of supporting a future ascent element.

This coincides with the currently scheduled Exploration Mission 3 (EM-3), also in 2024, which will launch a crewed Orion spacecraft, and the ESPRIT and U.S. Utilization modules of the gateway.

The second demonstration mission will then occur in 2026, with all three of the lander elements aggregating at the Gateway. The ascent element would be co-manifested with Orion aboard an SLS launch, while the descent and transfer vehicle elements would launch aboard commercial rockets.

The objectives of this second mission also include demonstrating either docking or berthing of the ascent element to the gateway, leveraging the robotic arm provided by the Canadian Space Agency. 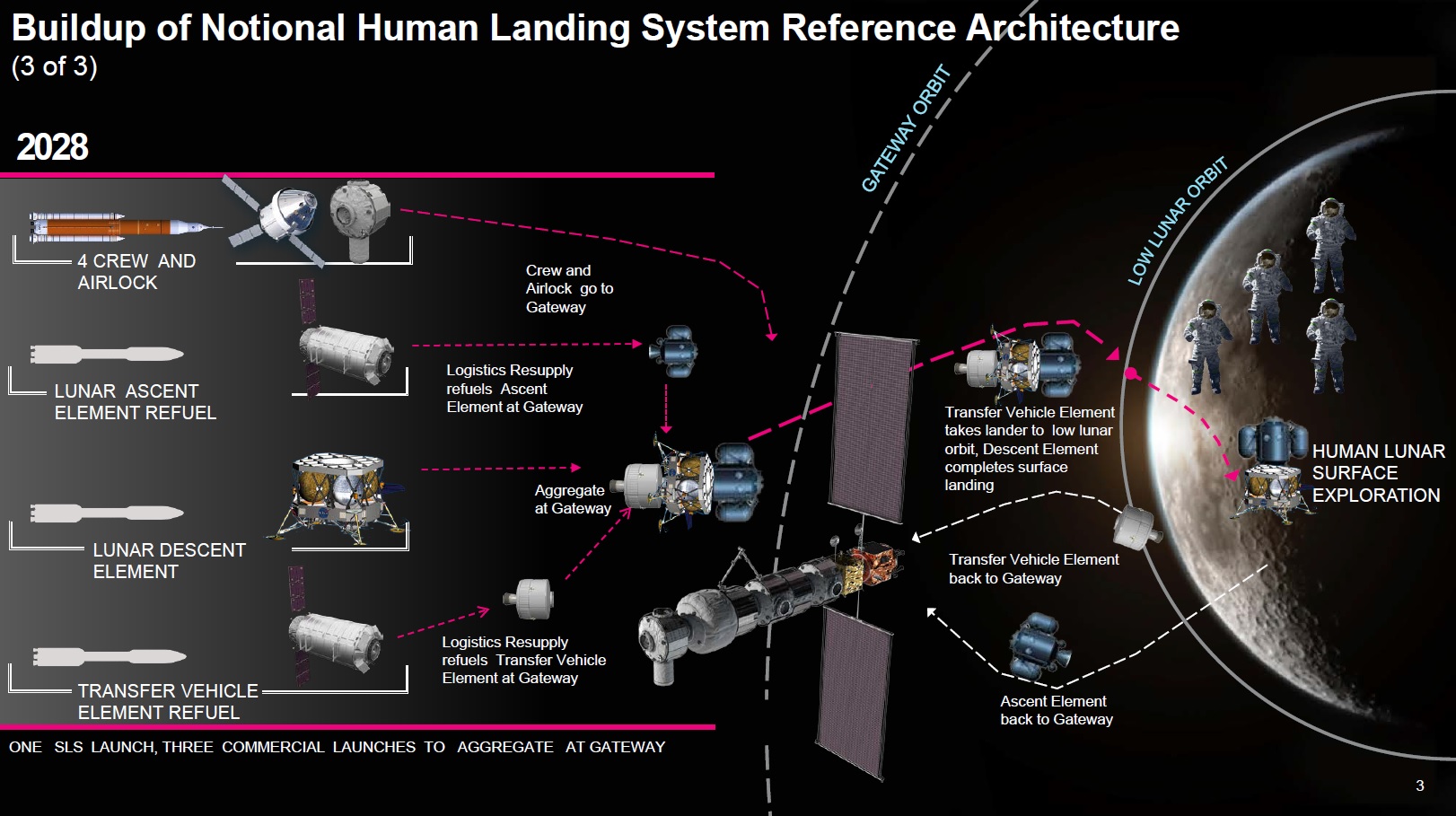 Mission profile of the third HLS demonstration mission – via NASA

In 2028, the third and final demonstration mission will bring the first crew to the surface of the moon. An SLS launch will carry an Orion spacecraft with four crew members, as well as the airlock module for the Gateway. Two commercially launched refueling elements will demonstrate refueling of the transfer vehicle and ascent elements, while a third commercial launch brings a new descent module.

Once again, the lander will be assembled at the Gateway and flown to Low Lunar Orbit by the transfer vehicle. After landing, and the crew will conduct an extra-vehicular activity (EVA) on the lunar surface. The ascent element will return with the crew to the Gateway.

NASA has outlined minimum requirements as well as eventual goals for each of the three elements covered by the RFP. Each element is required to fit within a 6.3 meter dynamic envelope diameter, a size that would only fit aboard SLS Block 1B or Blue Origin’s New Glenn.

The goal, however, is for elements to fit within a 4.6 meter dynamic envelope diameter, which would add possibilities of launching aboard SpaceX’s Falcon rockets or United Launch Alliance’s Atlas, Delta, or Vulcan vehicles. Each element is required to have a wet mass at launch less than 16 metric tons, with the goal of evolving to 15 metric tons or less. 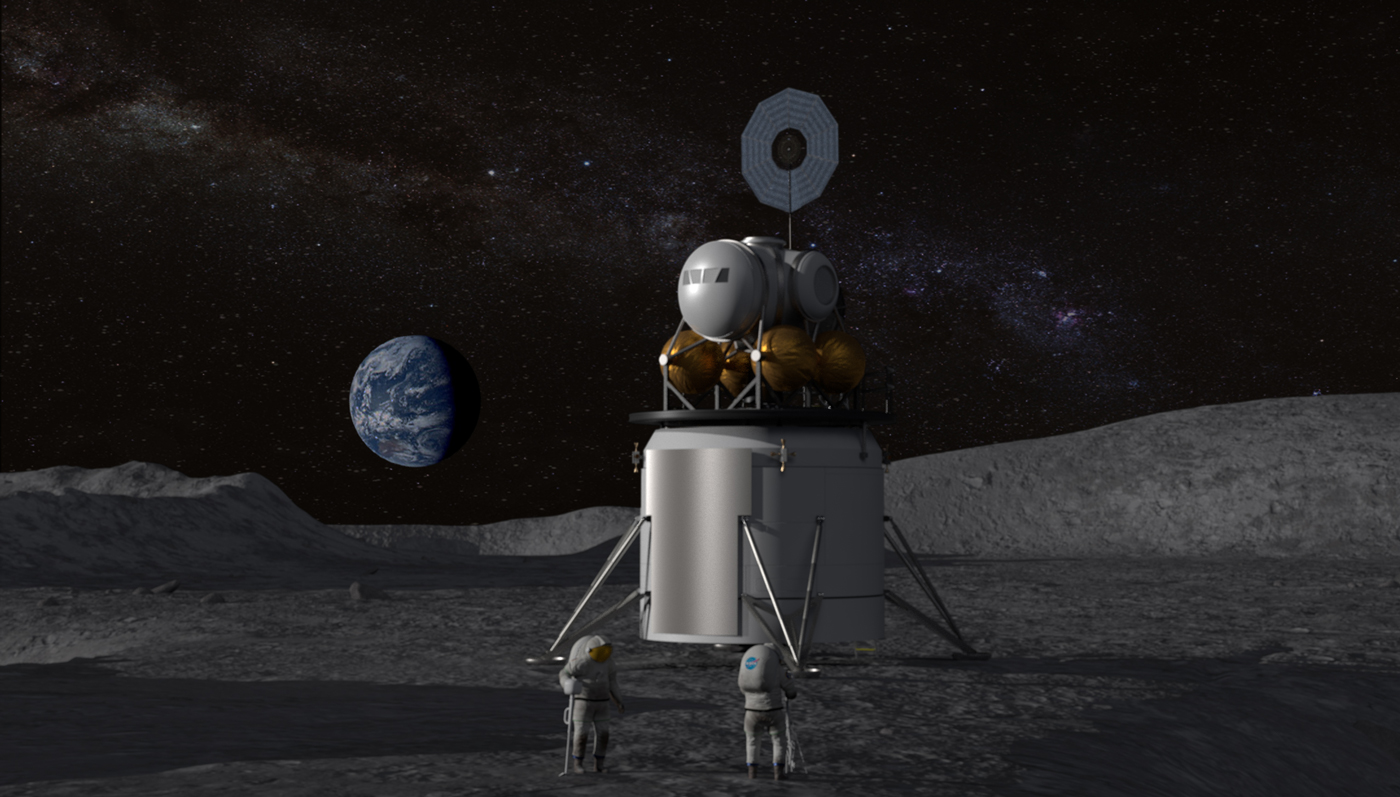 Concept of an HLS on the lunar surface – via NASA

The descent element is expected to require minimal changes from its 2024 design to support the 2026 and 2028 missions. Credible launch readiness by 2024 is required, with a goal of readiness in 2023.

Performance requirements include at least nine metric tons of payload from LLO to the surface, with a goal of 12 metric tons or more, the capability to land at any point on the lunar surface with precision of at most 100 meters and a goal of 50 meters, and a deep throttling capability of at least 4:1 with the goal of 6:1.

The performance expected of the transfer vehicle is at least 25 metric tons from the Gateway in NRHO to a 100 kilometer altitude LLO, including performance to return to the Gateway.

The propellant is required to be cryogenic or storable, with cryogenic fuels preferred. Credible launch readiness by 2026 is required, with a goal of readiness in 2025. 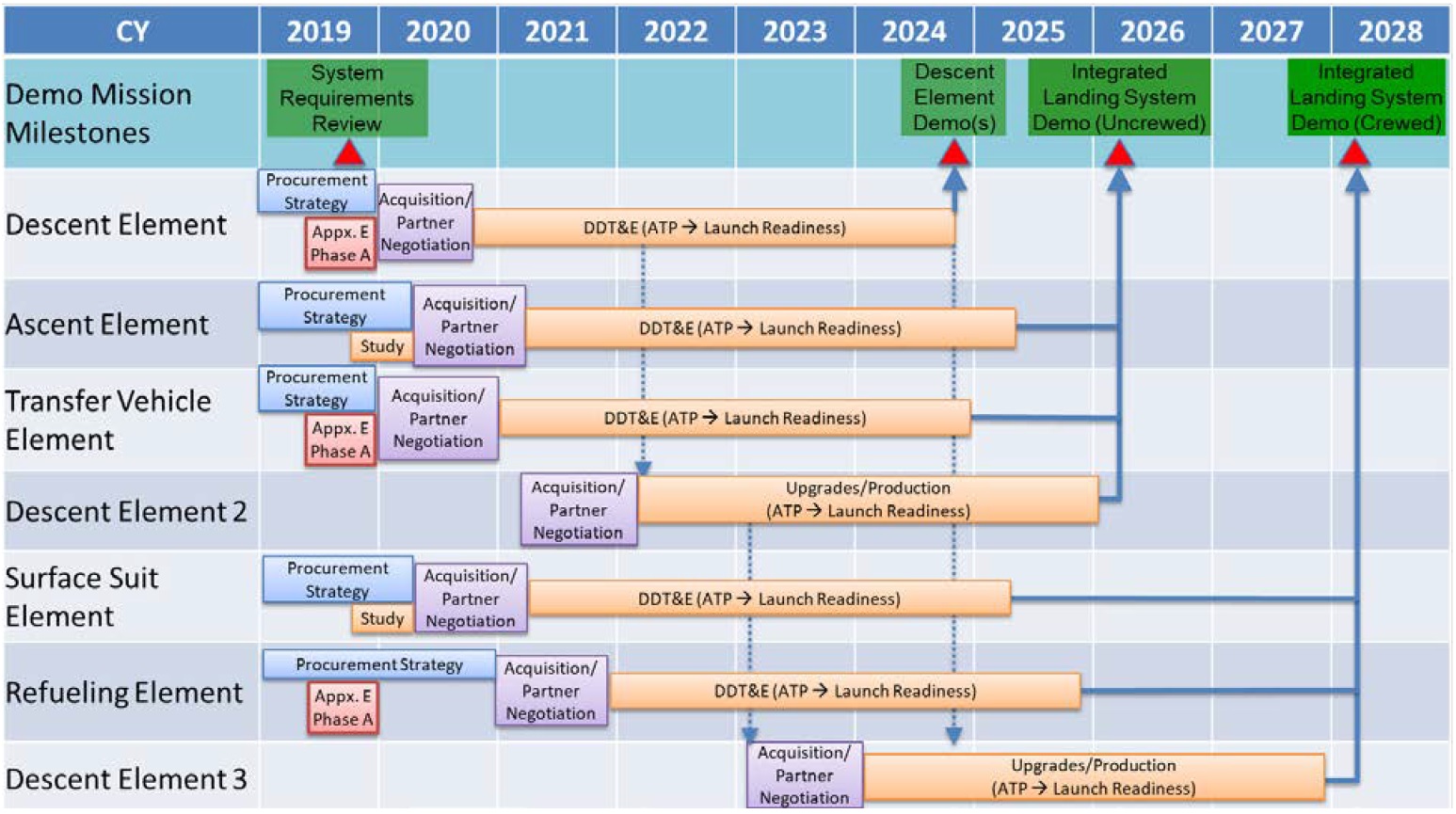 The refueling element is required to have a capacity of at least 10 metric tons of cryogenic or storable propellant, with cryogenic fuel again preferred. Launch readiness by 2028 is required, with a goal to be ready by 2026 or earlier.

The architecture’s elements are also intended to be reusable. The descent and transfer vehicle elements must be evolvable to be refuelable in order to support full reusability. NASA specified a goal of ten reuses for the transfer vehicle.

The refueling element is not required to be reusable at first, but at least partial reuse is still a goal. Eventual in-situ resource utilization (ISRU) capability, fuel production from resources on the moon, is intended to facilitate full reuse of the refueling element.

The RFP allows multiple proposals from any company, provided they are each for separate elements of the architecture. Multiple firm fixed-price awards ranging from $300 thousand to $9 million each are expected for Phase A of the program. Descent elements, as the first elements to be flight ready, are expected to receive the majority of award funds.

Phase A will involve a six month study to understand and refine the lunar architecture, including common interfaces between elements, schedules, and costs. Information from Phase A will also inform requirements for Phase B and other elements of the architecture, and identify plans for technology maturation.

Following these studies, NASA will give zero, one, or two Phase B awards to Phase A participants for the 2024 flight demonstration of the descent element, with award valuation of multiple hundreds of millions of dollars each.

A couple of companies have presented lunar lander designs in the past, but none that would lend themselves to NASA’s architecture. SpaceX’s in-development Starship vehicle is intended to be capable of landing on the moon, but is not a multi-stage nor is it within NASA’s size or mass requirements.

Lockheed Martin’s single stage moon lander design presented last year also does not fit within the architecture of the latest RFP. Proposals for Phase A awards are due to NASA by March 25.