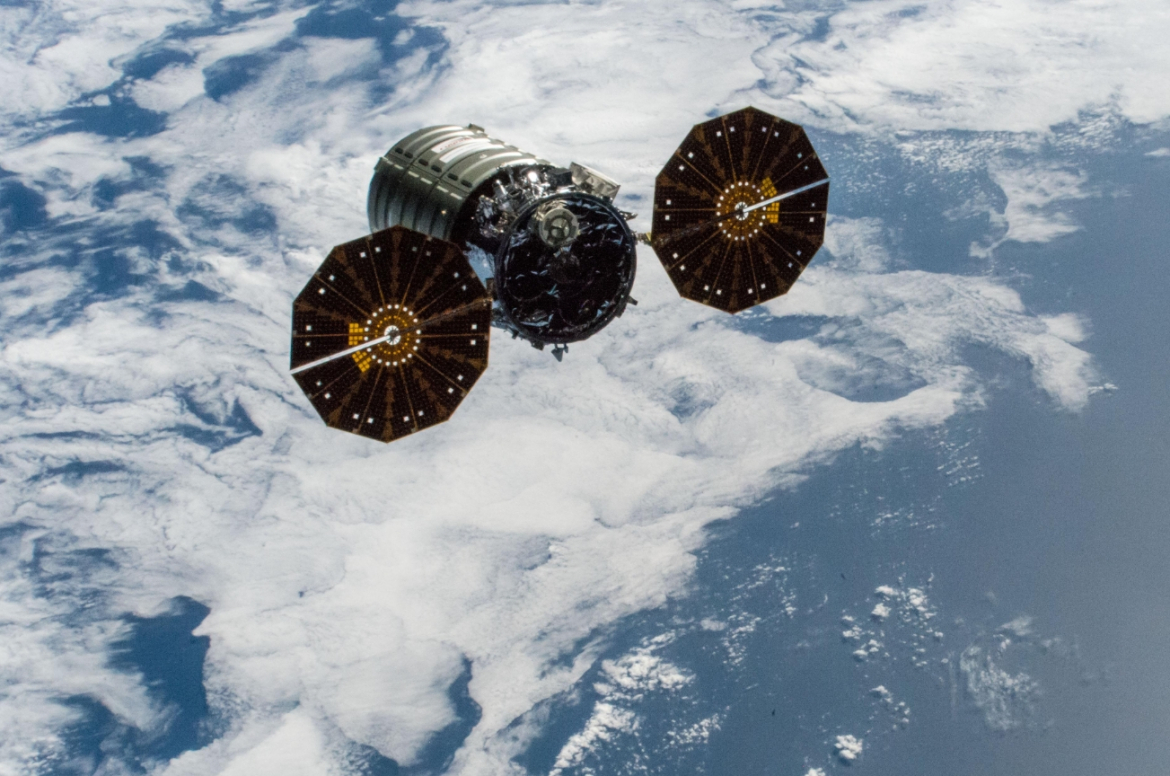 As the NG-10 Cygnus sails through its post-ISS mission, Northrop Grumman Innovation Systems continues showcasing the new capabilities of their cargo vessel, including a new CubeSat deployer for the SEOPS company and an – at the time of launch – unplanned use of Cygnus and its thrusters as part of a Missile Defense Agency test.

Ten days after leaving the International Space Station, the NG-10 Cygnus has completed deployment of its supplementary CubeSat payloads both above and below the orbital altitude of ISS.

For the first time though, part of this deployment involved the launch of CubeSats from a new, specially mounted dispenser outside of Cygnus’ hatch – a dispenser attached by crew members on board the Station prior to the S.S. John Young’s departure from the orbital outpost earlier this month.

The CubeSat deployments followed a flawless mission for Cygnus, with Frank DeMauro, VP and General Manager, Space Systems Division, Northrop Grumman Innovation Systems, noting in an interview with NASASpaceflight’s Chris Gebhardt that “performance has been excellent from the time we launched.  The rendezvous with the ISS was textbook.  All the berthing activities went exactly as planned.”

Objects in #Cygnus rear view camera are cooler than they appear. Check out this footage from the S.S. John Young’s departure from the @Space_Station on February 8! #NorthropGrumman pic.twitter.com/GmpEv7TfaY

“We’re doing a couple of different deployments on this mission.  Of course, we are doing deployments directly from the NanoRacks CubeSat deployer.  But we also flew another payload, a commercial payload from a company called SEOPS.

“The name of the program is called Slingshot, and as opposed to launching [the sats] out of the CubeSat deployer, which is mounted on the side of the Cygnus service module, these were [released from a] deployment system that was installed on the hatch of Cygnus.”

This hatch-mounted deployer was designed by SEOPS and stemmed from a desire within SEOPS to have more flexibility in launch and deployment of their nano satellites.

But SEOPS wanted more flexibility, such as launching their nano satellites on non-Cygnus spacecraft to get them up to the ISS before waiting for the optimal Cygnus mission to deploy them.

“What they really wanted was to get the CubeSats delivered to the ISS, stored within the ISS, and then mounted on Cygnus by the crew,” said Mr. DeMauro. 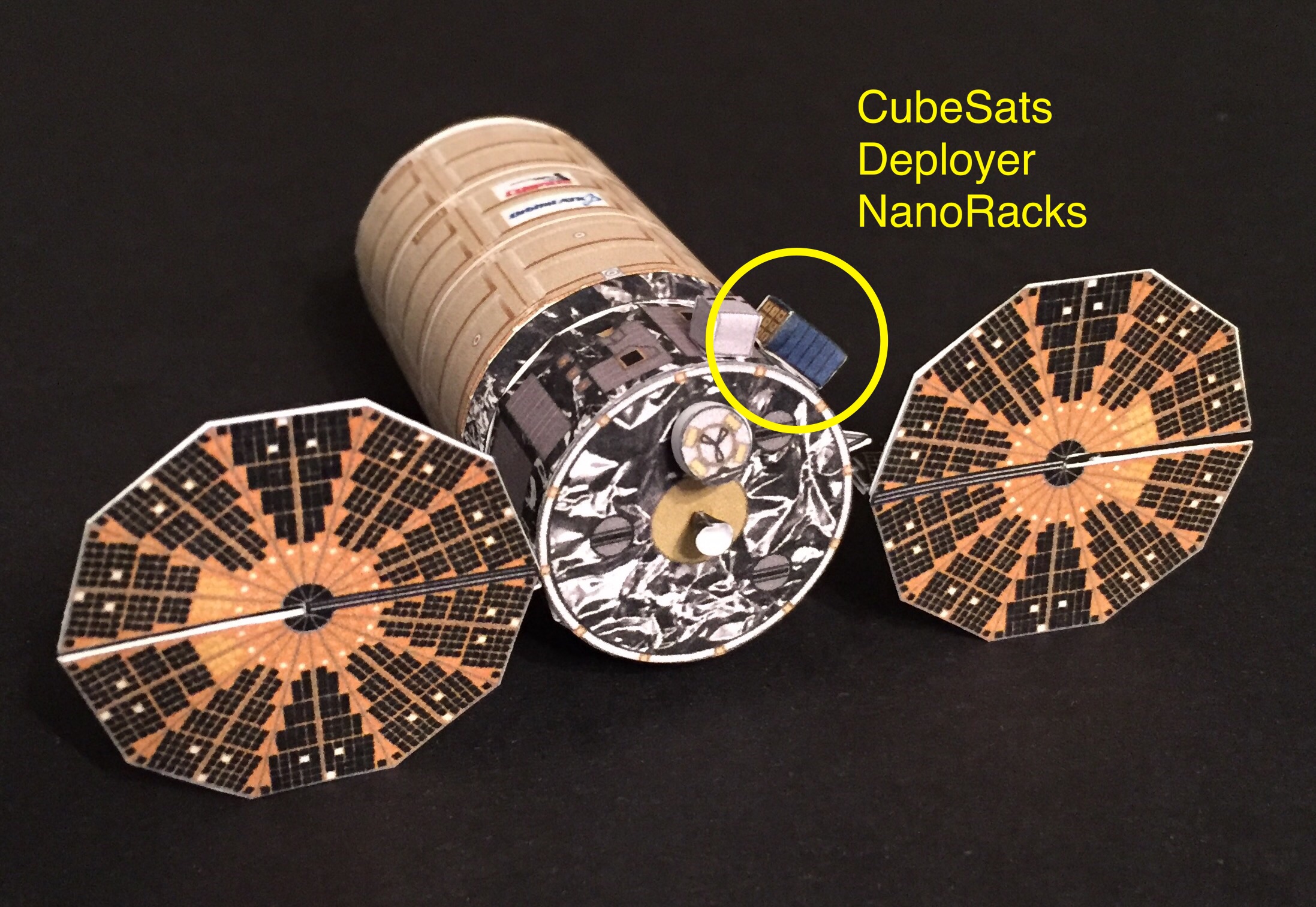 “And of course the only place you’re going to do that, unless you’re going to do an EVA, is on the hatch.  So it was a very creative and innovative way to get the added flexibility on when the CubeSats could be delivered to the ISS and by whom.”

Highlighting this flexibility on its very first use, Slingshot rode to the ISS in December 2018 inside SpaceX’s Dragon capsule on the CRS-16 mission, after which it was unpacked, stored, and then placed onto Cygnus’ hatch after that craft was all buttoned up for departure.

About six hours after Cygnus left the ISS on 8 February, two SEOPS payloads were deployed from Slingshot.  The two payloads were SEOPS-Quantum Radar-1 and -2 and are covered with optical reflectors so that students using collimated laser telescopes can track the satellites to investigate Low Earth Orbit (LEO) satellite decay characteristics and provide data for future CubeSat constellation lifetime estimates.

The addition of this new deployment capability continues Northrop Grumman Innovation Systems’ demonstration of Cygnus’ offering as a multi-use platform.  And while the new dispenser required some modifications to Cygnus, the changes were relatively minor.

“Since we needed to provide power and then commanding capability to the deployer, we modified our harnessing to run some additional wires up to the hatch,” noted Mr. DeMauro.  “There’s a connector already on the hatch that we could run those signals and power through, and then the Slingshot hardware is mounted to an electrical hookup.

SEOPS is excited to announce our first mission to fly the Slingshot Deployer System to the International Space Station. Slingshot is a CubeSat launch system that can accommodate many different CubeSat form factors from 1U – 12U and deploys at 500KM altitude. pic.twitter.com/2BaJD4uVpR

“But [we did] nothing really to the hatch.  Some updates to the harnessing within Cygnus, updates to our command and telemetry database, things like that.  It was relatively straightforward.”

The relative ease of this new accommodation is part of the Enhanced Cygnus that entered service with the OA-4 mission in December 2015 – which itself received an avionics upgrade with the OA-9E/NG-9 mission in May-July 2018.

“On NG-9, we had some avionics upgrades that we implemented when we started flying the C2V2 system.  And we took that opportunity to upgrade the avionics to make it more user-friendly to interface to the spacecraft for these external payloads.  We made a standard interface where it’s more of a matter of running wires than making wholesale changes to our electronics.

“And we think, moving forward, that’s going to become an increasingly attractive capability that Cygnus has for both commercial and government entities that might want to fly these hosted payloads or deploy CubeSats.”

To the point of interagency cooperation and how the International Space Station facilitates commercial cooperation in space, Mr. DeMauro highlighted the amount of work it took from all parties to accommodate this new Slingshot deployer.

“If you take the Slingshot example that we’ve now demonstrated on NG-10, even though our contract was directly with SEOPS, they had to coordinate with NASA to fly the CubeSats and the supporting equipment up on a mission, and then had to secure crew time to install that system onto the Cygnus hatch.

“It just highlights, on existing missions and moving forward, that the ISS is not only a national lab, government entity, and  [science platform], it’s also supporting commercial partnerships in the current environment in Low Earth Orbit. 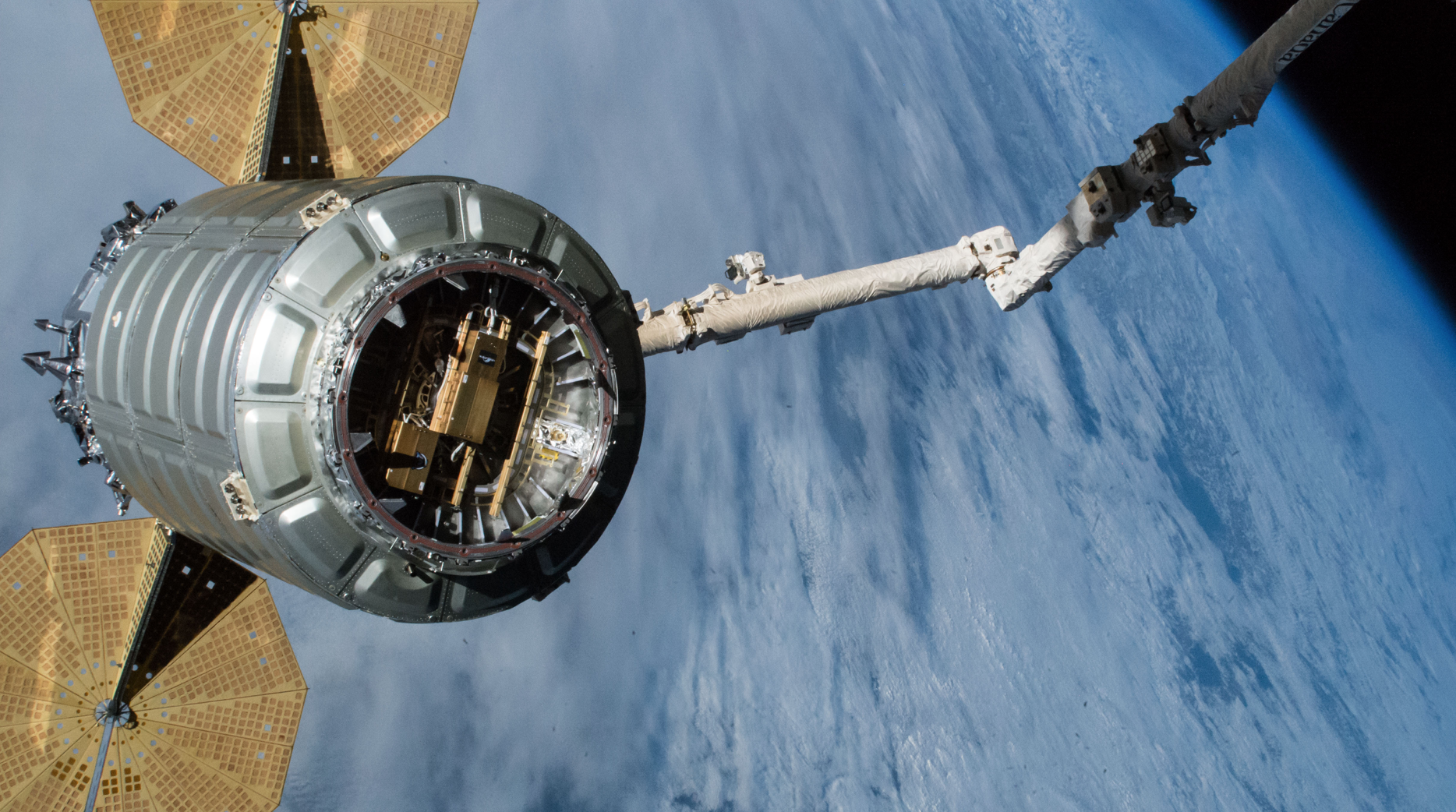 Slingshot attached to Cygnus’ hatch – as seen after Cygnus unberth from the ISS on 8 February 2019. (Credit: NASA/SEOPS/Hyper Giant)

“The ISS’s assistance, its use of a commercial company to deliver cargo, its support of commercial entities to get CubeSats or other experiments flying, I think [that’s] a story worth telling.  And we need to make sure that people understand that the ISS has really enabled these partnerships to take off, and we hope to be able to support that far into the future,” said Mr. DeMauro.

The new Slingshot deployer isn’t the only element of Cygnus’ usefulness being demonstrated on the NG-10 mission’s post-ISS time on orbit.

“Approval of this exception will allow NASA to directly issue TO 22, a sole-source, firm-fixed-price TO, to Orbital.” 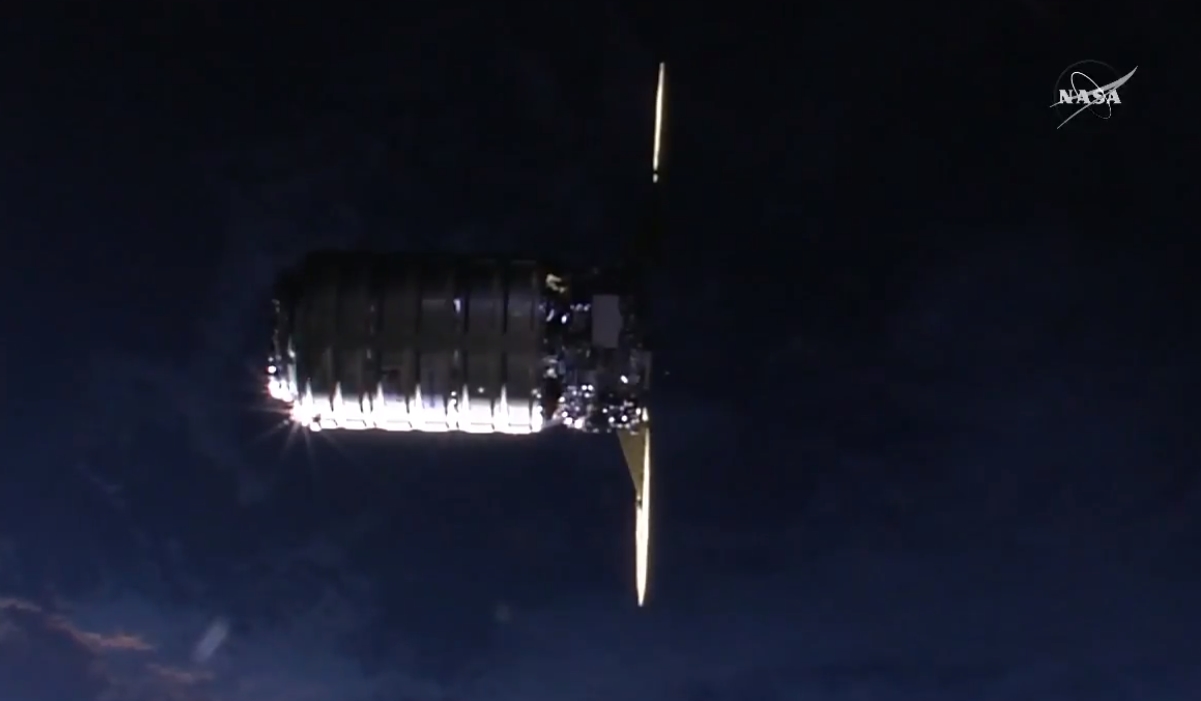 Cygnus, as seen from the International Space Station. (Credit: NASA)

The name “Orbital” is used in this context to refer to the original company that received the CRS1 contract for Cygnus resupply flights to the ISS.  After the contract award and first three Cygnus missions, Orbital merged with ATK to become Orbital ATK before the joint company was then acquired in June 2018 by Northrop Grumman to become Northrop Grumman Innovation Systems.

Exceptions to the fair opportunity process can be requested and granted if it is determined that only one provider’s vehicle is capable of fulfilling a desired test need.

In this case, the need for prolonged, post-ISS observations of thruster firings, attitude changes, and orbital maneuvers negates SpaceX’s ability to participate or bid for Task Order 22 as Dragon carries a requirement to return to Earth for splashdown and recovery too rapidly to be of use.

Additionally, Cygnus’ demonstrated ability to remain on orbit for weeks after separation from the ISS makes it the only CRS craft capable of meeting TO 22’s needs.

Our S.S. John Young #Cygnus successfully departed the @Space_Station on February 8 following its 81 day stay. Cygnus delivered ~7,400 pounds of cargo to astronauts on board and will now go on to deploy a total of 5 CubeSats as a part of its secondary mission. #NorthropGrumman pic.twitter.com/pXGohxfqOj

Once its work with the Missile Defense Agency is complete, the NG-10 Cygnus will fire its engine for a deorbit burn on Monday, 25 February 2019.  The deorbit burn will target Cygnus’ reentry over the south Pacific Ocean for a destructive, End Of Mission plunge into Earth’s atmosphere.