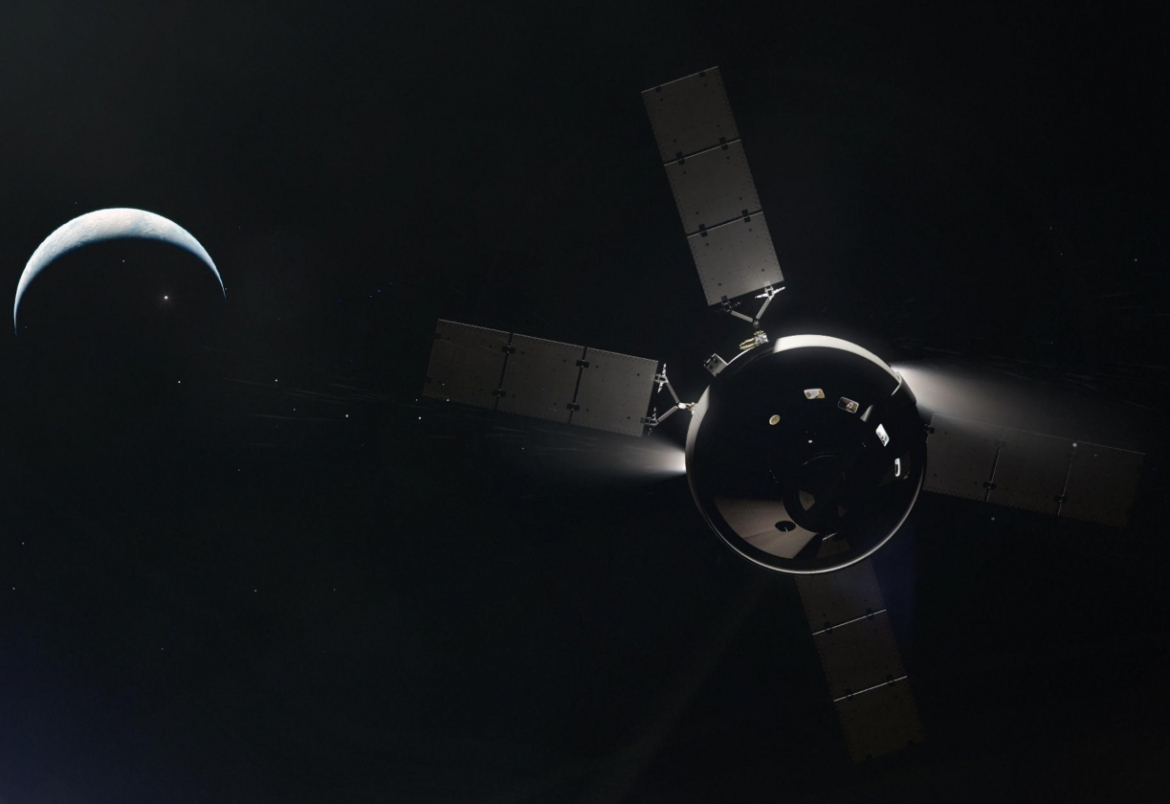 While final assembly continues on the Orion spacecraft that will make the program’s first solo flight, the major pieces of the next spacecraft are being assembled alongside for the first crewed mission. A crew of four is planned to take the spacecraft on a Lunar flyby during the Exploration Mission-2 (EM-2) test flight.

The Crew Module and Crew Module Adapter are still mostly structures, but Orion prime contractor Lockheed Martin is working with NASA to assemble, integrate, and test the EM-2 elements in parallel with the final work being done with the Exploration Mission-1 (EM-1) spacecraft that will fly uncrewed. Once the primary and secondary structure installations are complete, technicians will begin welding fluid system lines and then eventually installing other components, including the systems to support the crew during EM-2.

The Crew Module is built around the pressure vessel that is the living and working area for Orion crews. The Exploration Mission-2 (EM-2) module recently completed its proof pressure test in the Operations and Checkout (O&C) Building at the Kennedy Space Center (KSC) in Florida, following installation of additional hardware to fill out its primary structure.

“When I say ‘best’ the way I judge that is how many problems or how much the stress team struggled with any issues or data that they saw and it was a very quiet test,” he explained. “They came in, the stress guys came in, we performed the test, and I didn’t hear anything. I mean I didn’t hear one issue. The data they saw was as predicted, so really a clean test.” 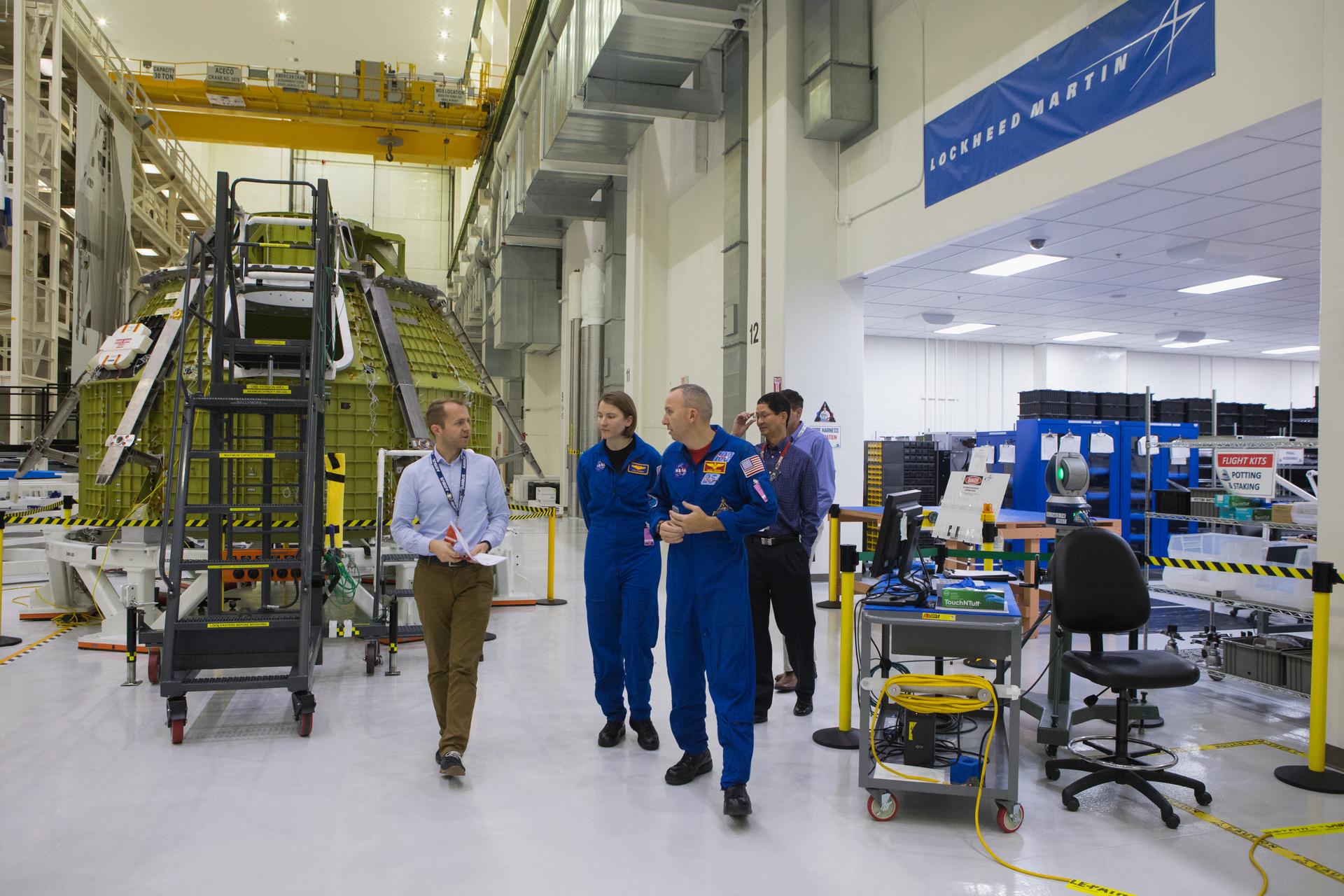 Crew Module pressure vessels are welded from seven structural components at the Michoud Assembly Facility (MAF) in New Orleans. The EM-2 article was completed in August and arrived at the O&C Building on August 24.

“We got the shell from Michoud, it went into our assembly jig, the famous birdcage, we put all the primary structure on that’s required for proof test, did the proof test,” Schneider noted.

Following proof test, the friction-stir welds done at MAF last year were being retested. “We’re back over near the birdcage,” Schneider said. “We’re actually doing the NDE (non-destructive evaluation) on the welds right now, the phased array [ultrasonic testing], and at the same time we’re just getting started on the secondary structure installation on EM-2 Crew Module.”

“A lot of the secondary structure are things like brackets that actually hold the tubing and align it so those are things you want to get in first,” Scott Wilson, NASA’s Production Operations Manager for the Orion Program, added. “It’s also some of the work that’s the dirtiest, right, with drilling.”

The secondary structure installation for the Crew Module is lengthy. “The crew module has literally hundreds of secondary structural elements and I’m not talking two-hundred, I’m probably talking closer to five-hundred so it takes a while,” Schneider noted.

The tube welds will then be proof tested and leak checked and then technicians will begin integrating the core set of avionics and electrical systems to do an initial power-on (IPO) of the Crew Module. “When you come out of the clean room, you start putting in all the avionics boxes because you want to get into initial power-on,” Schneider said. 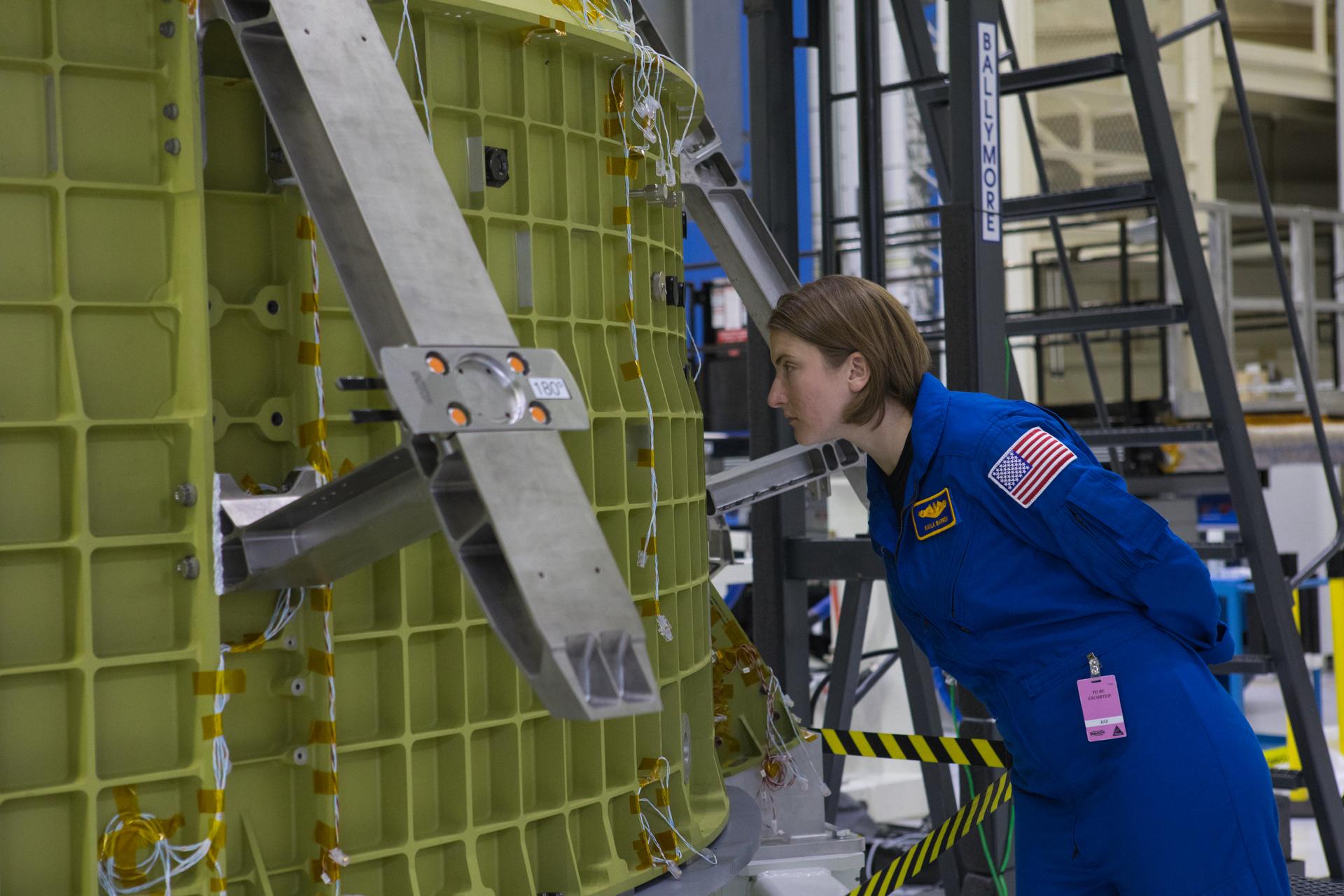 A second set of core avionics boxes was ordered to help with the EM-2 processing schedule. Although EM-1 spacecraft assembly is nearing completion, delays in launch mean it could still be almost two years off which could start impacting the assembly and test schedule for EM-2.

“I think the reason we went ahead and ordered the second set of core avionics is because we wanted to get to IPO as quickly as we can and I think we wanted to decouple IPO with the EM-2 CM from the EM-1 flight,” Schneider said.

“Originally we were going to take all the avionics out of EM-1 and basically recertify it and reuse it on EM-2,” Wilson added. “If you do that you end up waiting a little while for that avionics to get through recert and that would be a challenge to the EM-2 schedule.”

“We call it ‘core’ because it’s not every piece of avionics that we’ve got a second set for but it’s those key things that you need to get in early to enable EM-2’s initial power-on,” Wilson explained. “Then those other things we’ll sprinkle into the flow at the end and then the core set that’s on EM-1 will still get recertified, but it’ll go into a subsequent build.”

First time crew systems to be integrated with EM-2 spacecraft

The Crew Module and Crew Module Adapter elements are delivered as essentially bare metal structures that Lockheed Martin assembles and integrates into working spacecraft modules in the O&C Building at KSC.  The ESM is assembled and integrated by Airbus in Bremen, Germany.

The ESM is then transported to KSC for final assembly, first with the CMA and then with the Crew Module, a process the Orion assembly team is currently going through with the EM-1 spacecraft.  In parallel, EM-2 spacecraft assembly work is going on in adjacent work areas in the O&C.

EM-2 is the third and final development flight for Orion during the current Design, Development, Test and Evaluation (DDT&E) phase of the program.  The crewed test flight planned for 2022 will make a long, high Earth orbit before looping around the Moon and returning. 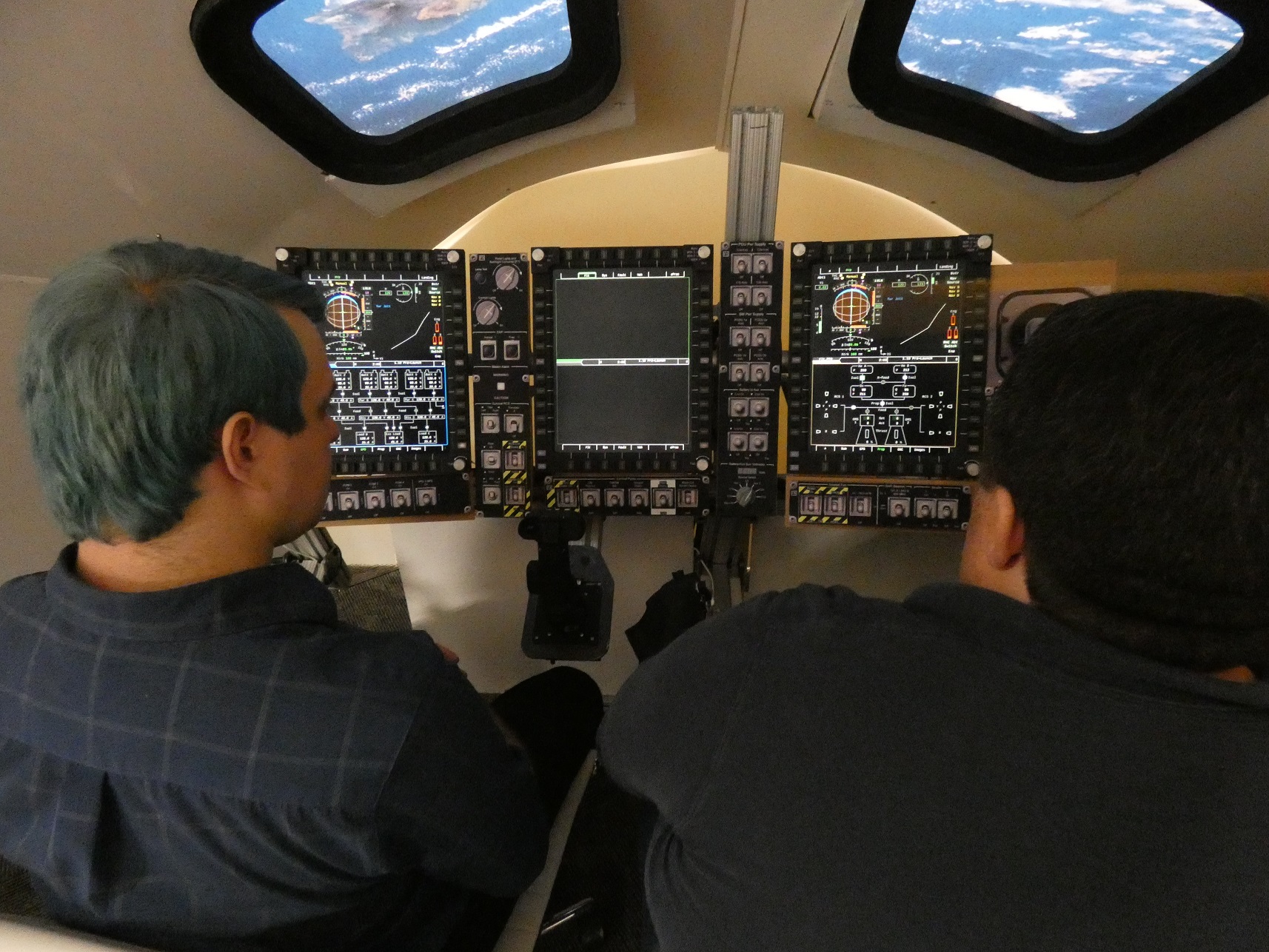 A development version of the Orion crew display units and switch indicator panels as seen at Johnson Space Center in April, 2018. Credit: Philip Sloss for NSF/L2.

EM-1 is the second test flight, which adds a working Service Module to a second generation Crew Module. NASA is still hoping to launch that flight by the end of 2020; Orion will make its first solo flight, going into Lunar orbit for a half or one and a half revolutions before returning to Earth.

The spacecraft configuration for EM-2 adds all the equipment and additional supplies to support a four-person crew for up to twenty-one days on a standalone mission.  “The main difference between EM-1 and EM-2 is just that, it’s really the crew interface and the suit interface,” Schneider said.

“The waste management system is not flying on EM-1, the displays, the flat panel displays because there’s no one to look or touch it, you know to issue to commands, those kinds of things are the things that we’re not flying on EM-1.” 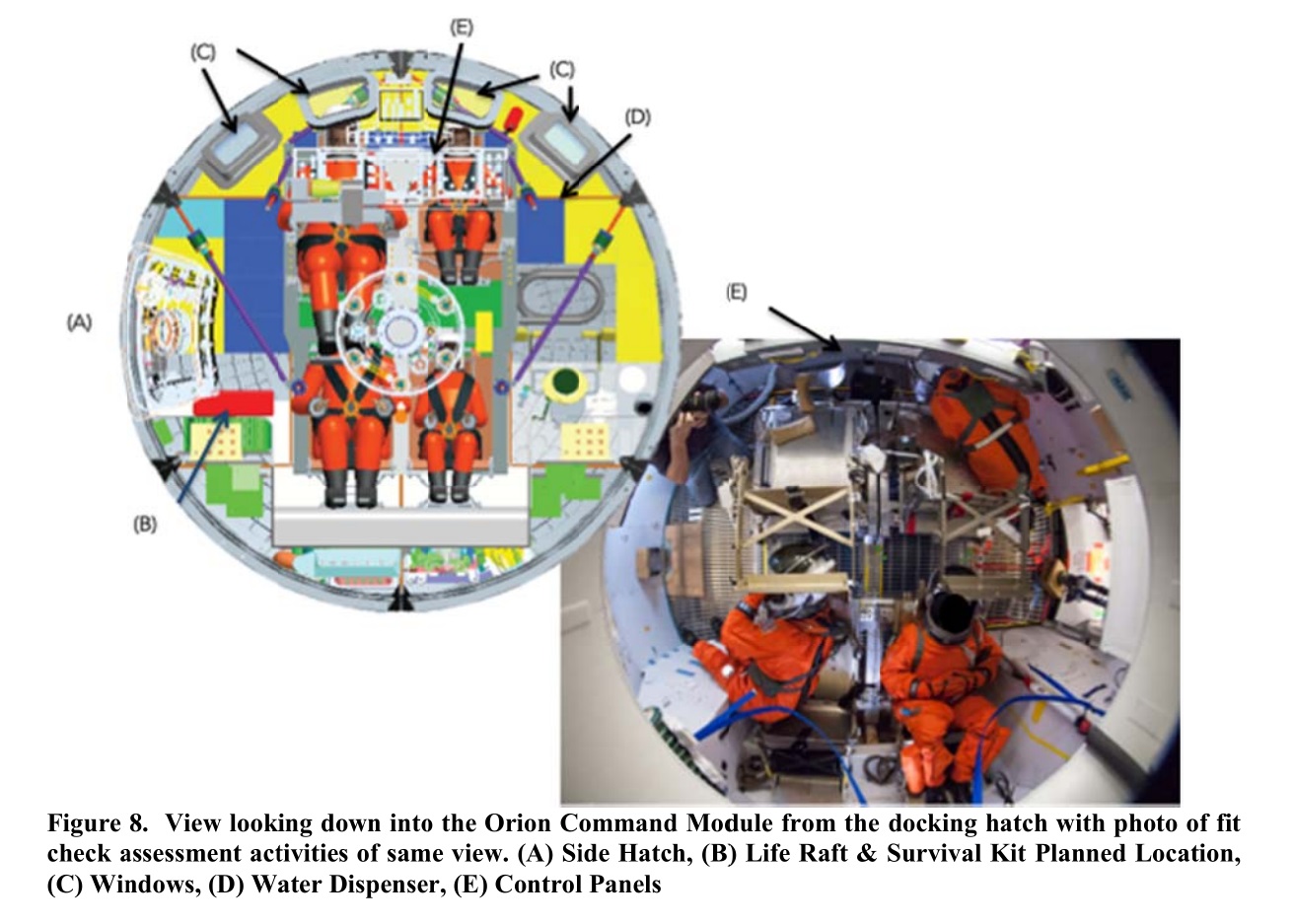 A fully functioning Environmental Control and Life Support System (ECLSS) will be integrated for the first time on EM-2; in addition to waste management, there are systems for (among other things) air revitalization, fire detection and suppression, and cabin pressure and temperature management. Displays and controls for the crew to monitor the vehicle and also command and control operations when needed will be installed on EM-2, along with space-to-ground communication systems and seats used during dynamic phases of flight like ascent and entry.

Additional avionics boxes and software functionality are also being integrated into Orion’s computer systems on EM-2 to support the crew.

The structures for the donut-shaped Crew Module Adapter arrived at KSC early in the year to begin structural assembly. “We received we call it the inner wall, which is now an inner ring,” Schneider said. “We received that in late January. It’s already loaded into the assembly jig and the metallic structure, the longerons and the intermediate frames have all been loaded into the tool and we’re in the process of mechanically assembling all that.”

Schneider also noted: “The composite walls are starting to show up, the aft walls and the forward walls.” 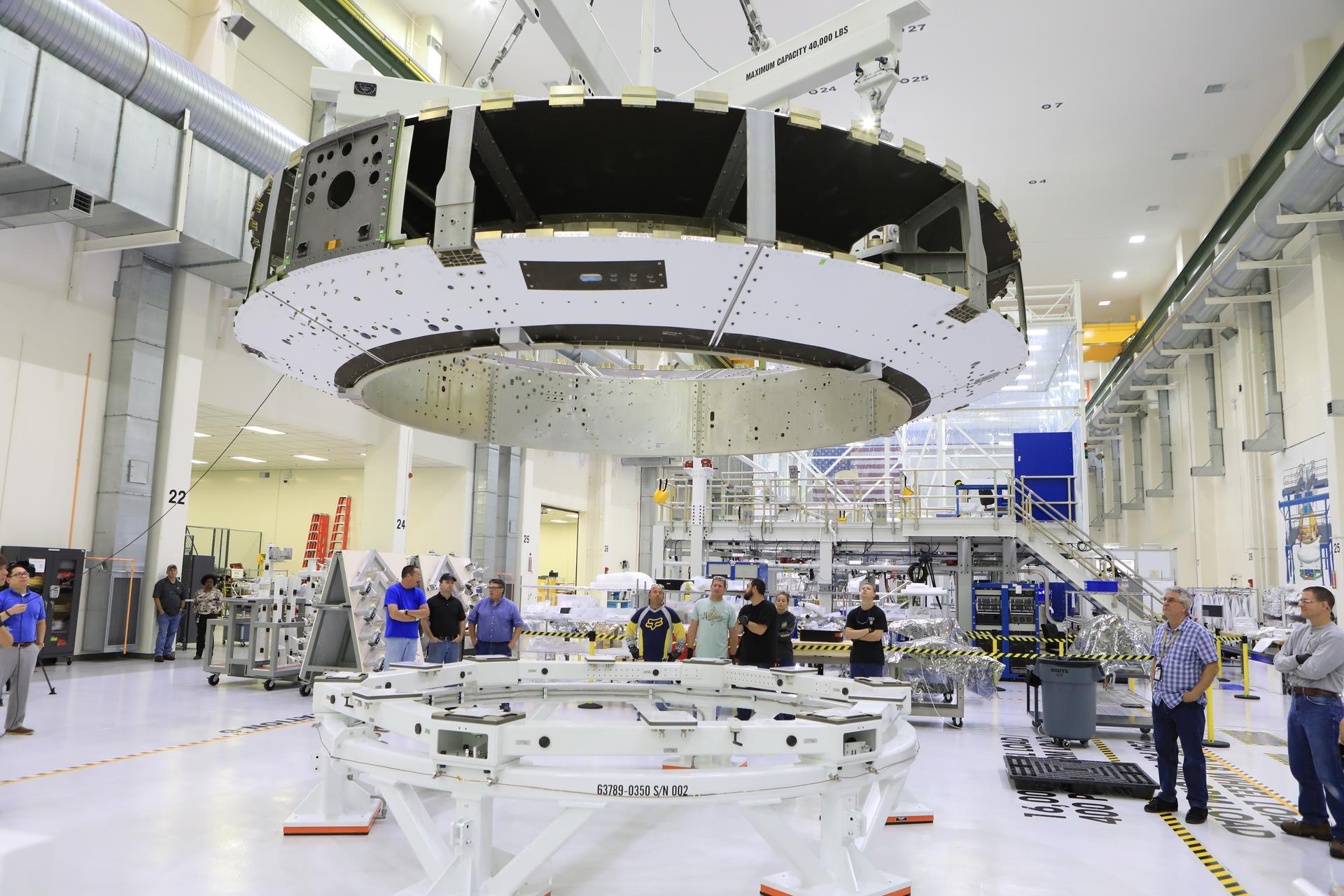 The EM-1 Crew Module Adapter structure in November, 2016, during a lift prior to moving to the clean room for welding work. Several of the longerons around the radius of the inner wall, the aft wall panels on the bottom of the CMA, and the ground umbilical plate can be seen. Credit: NASA/Glenn Benson.

The inner ring structure was redesigned from a set of composite panels to a single, machined piece of metal for EM-2.

“The inner ring as Jules said comprises the inner wall of it,” Wilson said. “It used to be as Mark (Kirasich) probably told you multiple pieces that was somewhat flexible [and] caused a lot of issues in manufacturing, so we’ve gone to this single milled ring.”

“That’s the inner mold line, kind of the center of the donut of the CMA and then around that radially go the longerons,” he added. “There’s primary longerons that are I think at six locations around it that comprise the load path all the way down into the ESM below it and the load path all way up through the longerons in the crew module.”

“And then between those six there’s what we call intermediate frames which provide the structure to it, but they’re not the primary load paths. And so those are the main things and then there’s some other frames, umbilical frames and different things in there but for the most part it’s the longerons and the intermediate frames.”

“And then the two PDUs (Power Data Units) in the Service Module are housed in there, so there’s cold plates that have to go in and a lot of similar stuff in there to what’s in the Crew Module. We’ve got active thermal control in there and then all the electrical systems, wiring, all that stuff.” 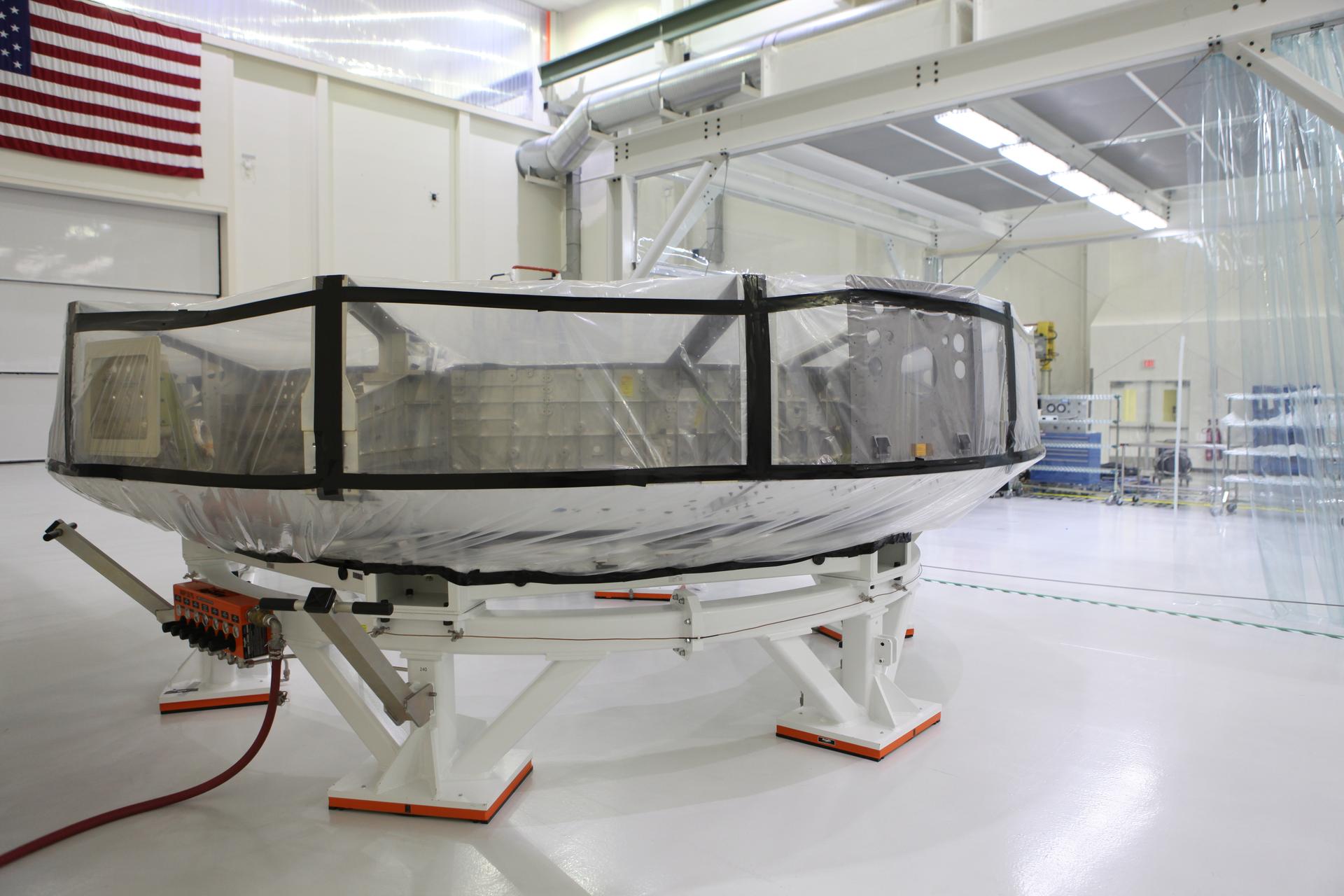 The EM-1 Crew Module Adapter inside protective covering at the end of November, 2016, during work to move it into the clean room. Once the primary and secondary structures are outfitted on the EM-2 CMA it will follow the same path through integration and test. Credit: NASA/Ben Smegelsky.

The CMA will go through an outline of work similar to the Crew Module. “It’s not quite as long because it’s not as big and complicated — it doesn’t have as many components as the Crew Module does,” Schneider noted.

“It pretty much has the same exact sequencing from a life cycle standpoint that the Crew Module has — you do the structure first,” he continued. “Now there’s no structural welds, so you don’t have to do a structural proof test like you do on the crew module; but as soon as you get it structurally complete, you know it’s got secondary structure just like the crew module, you’ve got to do all that.”

Another major hardware element is still being fabricated off site. “Lockheed Martin Space in Denver builds the substrate, the structural elements of the heatshield,” Schneider said. “It’s in assembly as we speak.”

“It’s due here not too long from now and I think it’s on track to make it, so it’s in good shape. It’s a titanium truss with a composite substrate that goes over it that we bond the Avcoat blocks to. They’ve had a few challenges with it but I think they’ve worked through it and I think it’s coming to us in the Spring or in the Summer and we’ll start processing it, putting the Avcoat on it.” 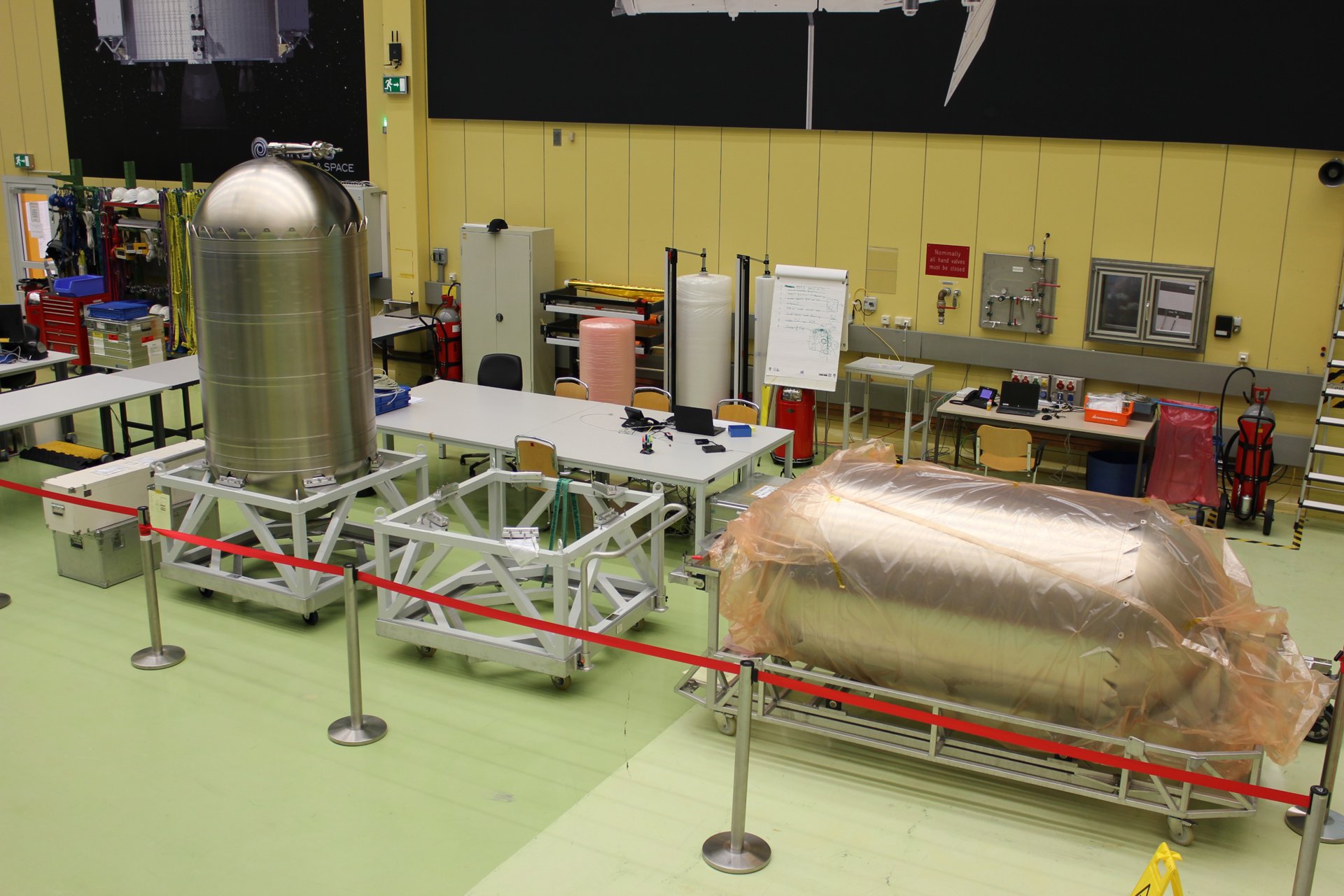 Two of the four propellant tanks that will be installed in the second ESM following arrival at the Airbus ESM assembly, integration, and test (AIT) facility in Bremen, Germany. ESM Flight Model-2 will fly on the EM-2 mission. Credit: Airbus Defence and Space.

Meanwhile assembly, integration, and test of ESM Flight Model-2 (FM-2) continues in Bremen. Airbus recently posted a photo marking the arrival of two of the large hypergolic propellant tanks there.