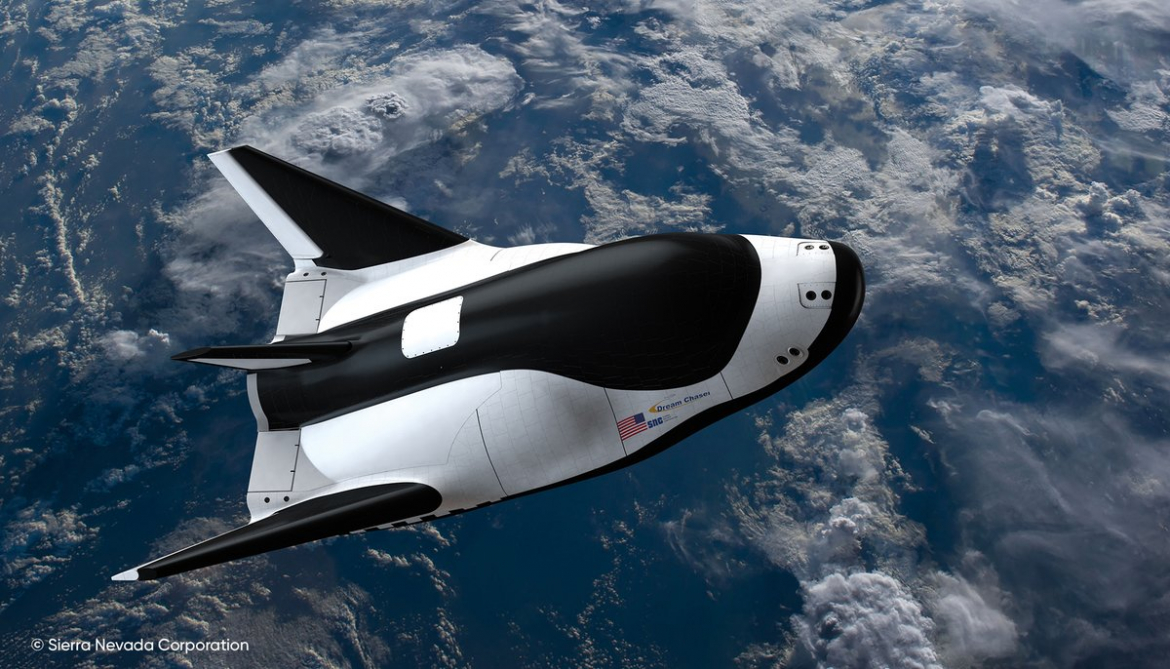 Sierra Nevada Corporation’s Dream Chaser is quietly making progress towards her latest goal of carrying out resupply missions to the International Space Station (ISS), starting in 2021. The Cargo variant of the spaceplane – also sporting an updated “color” scheme – is now deep into construction ahead of flying on NASA’s Commercial Resupply Services 2 (CRS2) missions.

The company also made a rare reference to the crew version of the vehicle, which continues to be an active program – if without any NASA missions – under a Space Act Agreement (SAA) with the agency.

Dream Chaser will be flying at least six missions to the ISS in the 2020s, following NASA’s contract award to SNC – along with SpaceX and Orbital ATK for the CRS2 missions.

The addition of Sierra Nevada Corporation (SNC) to the list of commercial cargo resupply companies will now see the Dream Chaser mini-Shuttle fly in a cargo configuration for Station resupply runs.

While the CRS stalwarts of Cygnus and Dragon are regular visitors to the ISS, Program Manager Kirk Shireman cited the need for “dissimilar redundancy” in adding Dream Chaser to the mix – a key selling point previously used by SNC during Dream Chaser’s crew transportation aspirations.

Dream Chaser was making solid progress on the Commercial Crew milestones. The only blot on her report card was a landing gear failure during a 2013 landing test at the Dryden Flight Research Facility in California.

During this test, the space plane flew itself toward the ground and runway for a landing approximately one minute after release.

However, as it approached the runway and landing gear deployment was commanded, the left landing gear failed to deploy fully, resulting in the vehicle skidding off runway 22L at Edwards. Notably, the landing gear was donated by a fighter jet and was not a specific part of the Dream Chaser hardware.

Dream Chaser during her first landing attempt – via SNC

Post-test recovery of Dream Chaser showed that while the craft suffered minor damage, the crew compartment was intact and all of its systems were still operational. Unintentionally, the landing gear failure accidentally demonstrated Dream Chaser’s ability to safely protect its crew/cargo and survive a partial “landing gear failure scenario” at landing.

However, it was likely one of the reasons Dream Chaser lost out on the final funding round that ultimately saw SpaceX’s Crew Dragon (Dragon 2) and Boeing’s Starliner (CST-100) win contracts for the missions that will return domestic launch capability for US astronauts for the first time since the retirement of the Space Shuttle fleet in 2011.

The decision was controversial and led to a Commercial Crew Transportation Capability (CCtCap) contract award protest from SNC after missing out on a slice of the $6.8 billion pot – of which the lion’s share was allocated to Boeing.

“In its 51 year history, SNC has never filed a legal challenge to a government contract award. However, in the case of the CCtCap award, NASA’s own Source Selection Statement and debrief indicate that there are serious questions and inconsistencies in the source selection process. SNC, therefore, feels that there is no alternative but to institute a legal challenge.

“SNC’s Dream Chaser proposal was the second lowest priced proposal in the CCtCap competition. SNC’s proposal also achieved mission suitability scores comparable to the other two proposals. In fact, out of a possible 1,000 total points, the highest ranked and lowest ranked offerors were separated by a minor amount of total points and other factors were equally comparable.”

The protest was ultimately unsuccessful. Dream Chaser did repeat the test in 2017, this time nailing the landing and rollout at Edwards Air Force Base.

Dream Chaser would then go on to gain a NASA contract via its cargo variant and has been passing milestones ahead of its debut launch on an Atlas V, currently expected to take place in early 2021.

When the vehicle takes flight, she will look slightly different from recent renderings, with SNC deciding to alter the Thermal Protection System (TPS) design by adding more white tiles to the skin of the craft.

SNC noted that while the change was to aid the obvious requirements on the TPS during re-entry, it also adds more protection against MMOD (MicroMeteoroid and Orbital Debris) threats.

From the paperwork standpoint, Dream Chaser recently passed NASA’s Integrated Review Milestone 5 (IR5), a key status check on SNC’s performance of a variety of ground and flight operations. Cargo loading operations have been part of the ground operations testing.

“Our Dream Chaser team continues to successfully execute milestones as we move closer to getting this spacecraft into space,” said Fatih Ozmen, SNC’s owner and CEO at the time of passing IR5.  “The orbital spacecraft is being built and this milestone demonstrates the vehicle keeps passing key reviews and is making great strides.”

SNC then released rare photos of the vehicle in a video – specifically the pressure vessel – under construction at Lockheed Martin’s famous Skunk Works.

The video showed the heritage, albeit with obvious changes, between the crew and cargo versions of the Dream Chaser – with the latter allowing for a much larger capacity of cargo upmass, which will be its main job during CRS2.

Notably, Dream Chaser’s downmass will be brought directly from the ISS to a runway, such as the Kennedy Space Center’s Shuttle Landing Facility (SLF), allowing for faster processing of critical experiments. This is a key part of the “dissimilar redundancy” when compared to other vehicles.

Quick comparison between the cargo and crewed versions, question now is, where is the crewed version hiding ? #DreamChaser pic.twitter.com/IS7Zp1Cyi5

Interestingly, in reaction to the above tweet asking about the status for crew Dream Chaser, SNC confirmed work is still active on the human-rated vehicle, which is technically still under a NASA contract, albeit via what is understood to be an unfunded Space Act Agreement (SAA).

“While we may not be showing it off publicly, we still continue to work on the crew design through an agreement with NASA,” noted SNC in a twitter response. “We actually meet with the Commercial Crew Program regularly and brief milestones to them through that agreement.”

This note becomes more interesting when considering the issues during the development of the Crew Dragon – specifically the anomaly during the SuperDraco thruster testing several days ago – and Starliner is likely to see both vehicles being delayed from launching humans, potentially into 2020. 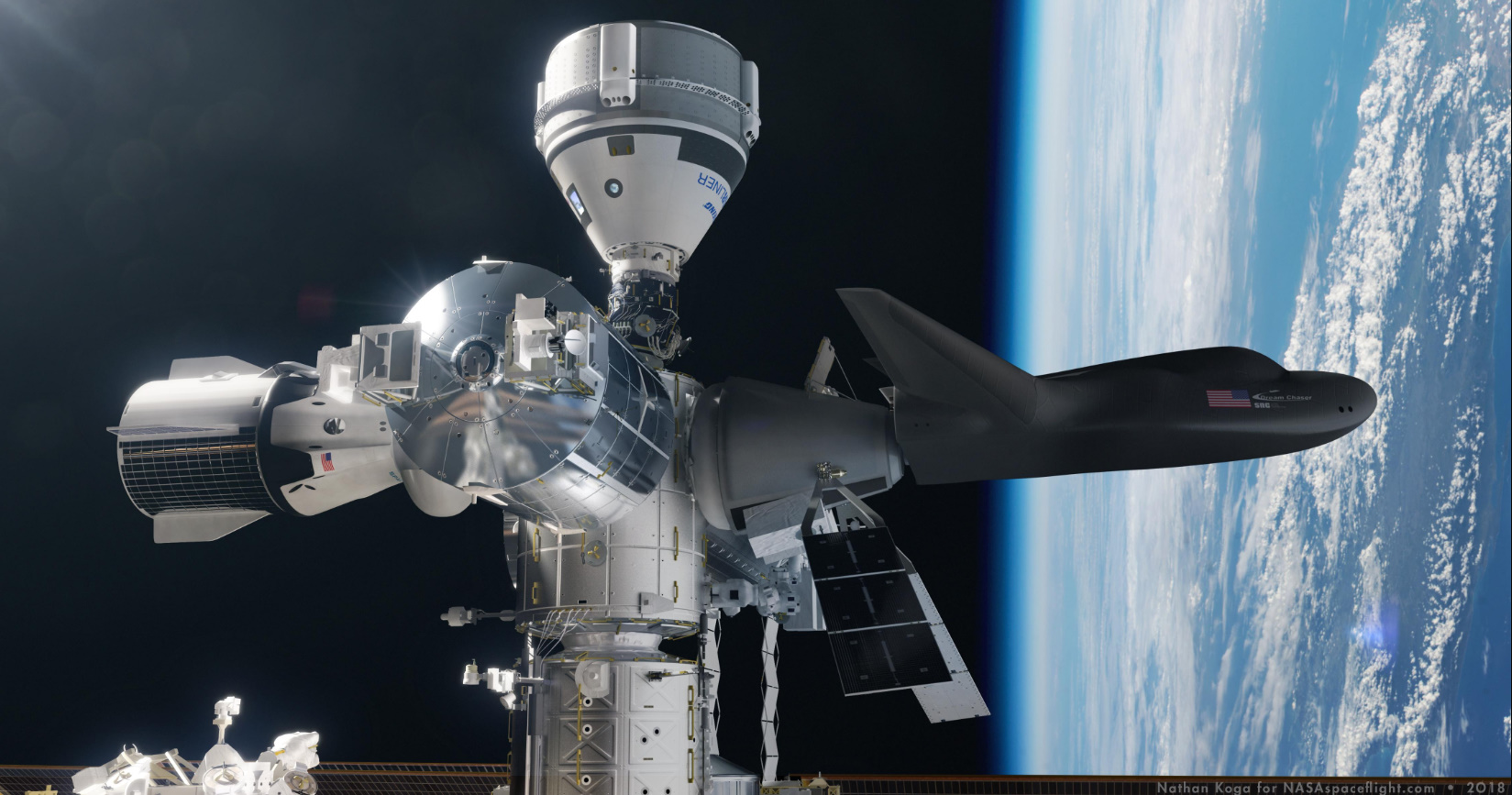 Crew Dragon, Starliner and Dream Chaser all at the ISS – render by Nathan Koga for NSF/L2

Depending on just how much work is taking place on the crew Dream Chaser, NASA could – in theory – providing funding to ramp up the work on the Dream Chaser crew vehicle and create a back-up option in case of further issues with the two primary Commercial Crew vehicles.

Despite the issues with Crew Dragon and Starliner, NASA is far more likely to continue to purchase more Soyuz flights to ensure it can launch American astronauts to the ISS and to provide an uninterrupted US presence on the orbital outpost.