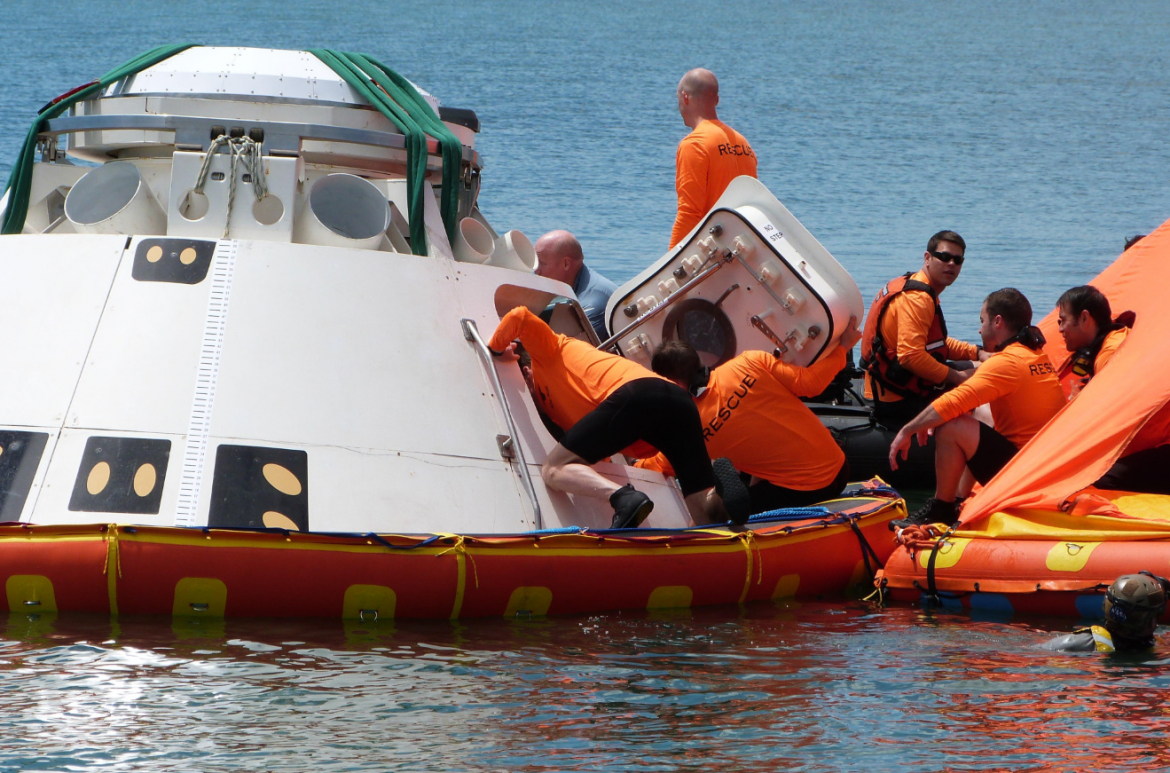 In preparation for the return of crew launches from the United States, the Department of Defense, in coordination with the U.S. Air Force and rescue dive teams, have outlined how they would rescue the crews of a Dragon, Starliner, and/or Orion spacecraft should they abort into the sea or perform an off-nominal ocean landing.

The procedures are only in regard to rescuing a crew, with the recovery of the individual capsules being left to the respective agencies.

The outline of this plan came earlier this week while crews performed the first open water test of rescue operations for Boeing’s Starliner capsule in the middle basin of Port Canaveral, Florida.

That test was specifically to determine how the various rescue equipment would be connected to the Starliner and how the overall generic rescue procedures need to be modified or tweaked for Starliner as compared to Dragon and Orion.

Starliner was the third of the new vehicles to undergo such testing, which was carried out this week ahead of Starliner’s anticipated flights later this year on an uncrewed Orbital Flight Test and a Crew Flight Test. 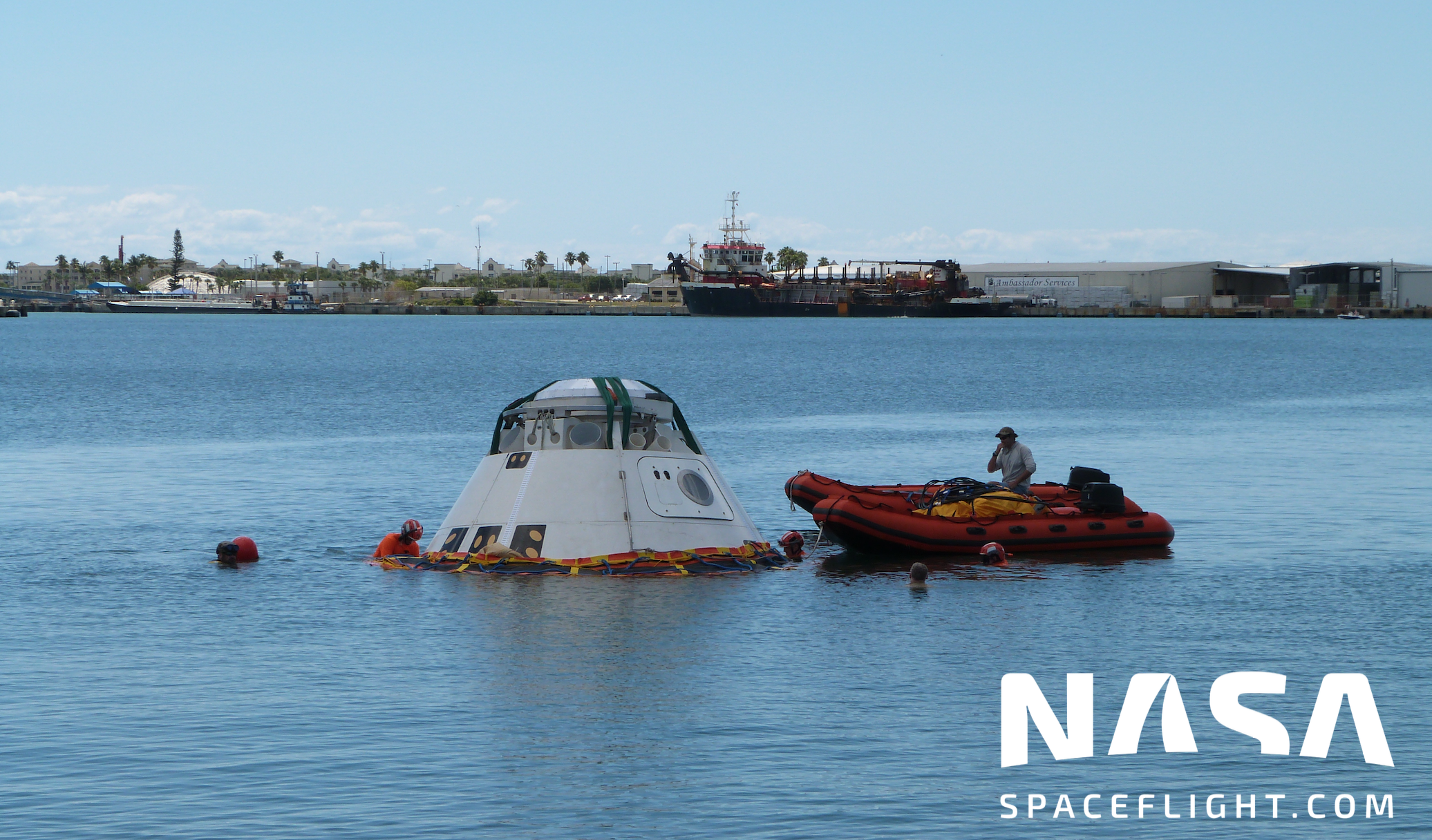 Teams attach the stabilization collar to Starliner during the first part of at sea rescue trials. [Credit: Chris Gebhardt for NSF/L2]

Per the generic rescue plan across all three U.S. crew vehicles, the practice and trainings – like the one this week – are meant to familiarize the Air Force and DoD rescue divers with how to “stabilize the capsule, get astronauts out, and then perform immediate care and treatment until [they can get] to a higher level of care.” said Captain Paul Fry, 304th RQS Assistant Director of Operations based in Portland, Oregon.

The rescue procedures were developed between NASA and the DoD, with capsule-specific input from SpaceX for Dragon, Boeing for Starliner, and NASA for Orion.

While minor elements will need to be tweaked here and there for each capsule, the overall procedures are the same, as is the equipment that will be used.

The front porch, conversely, will be the same for all vehicles.

The main difference, though, with the generic rescue plan has to do with Starliner – which is the only one of the vehicles with nominal land landings at the end of its mission.

Because of this, Starliner’s hatch will ride lower to the waterline compared to Dragon and Orion.  Thus, rescue of a Starliner crew will first and foremost involve assessing how the capsule is riding in the water and attaching lifting bags or airbags to the craft to help raise it higher in the water.

This would particularly be needed for inclement weather conditions during a potential Starliner crew rescue, as opening the hatch while the capsule is in its natural height above the waterline could permit water intrusion into the capsule – which needs to be avoided whenever possible.

Attaching these lifting bags and raising the Starliner further out of the water than how it naturally lands will, however, not always be a necessity.  Should the capsule land in very calm conditions, it might not be necessary to raise the capsule higher in the water before opening the side hatch.

The Patrick Air Force Base team will be tasked with abort rescues that occur within 200 nautical miles of Cape Canaveral – be it a pad abort or an In-Flight Abort in the first couple minutes of flight.

Under this scenario, the Patrick Air Force Base six-person team will have to reach the capsule, get the crew out, and have started back to land within 6 hours of the abort. 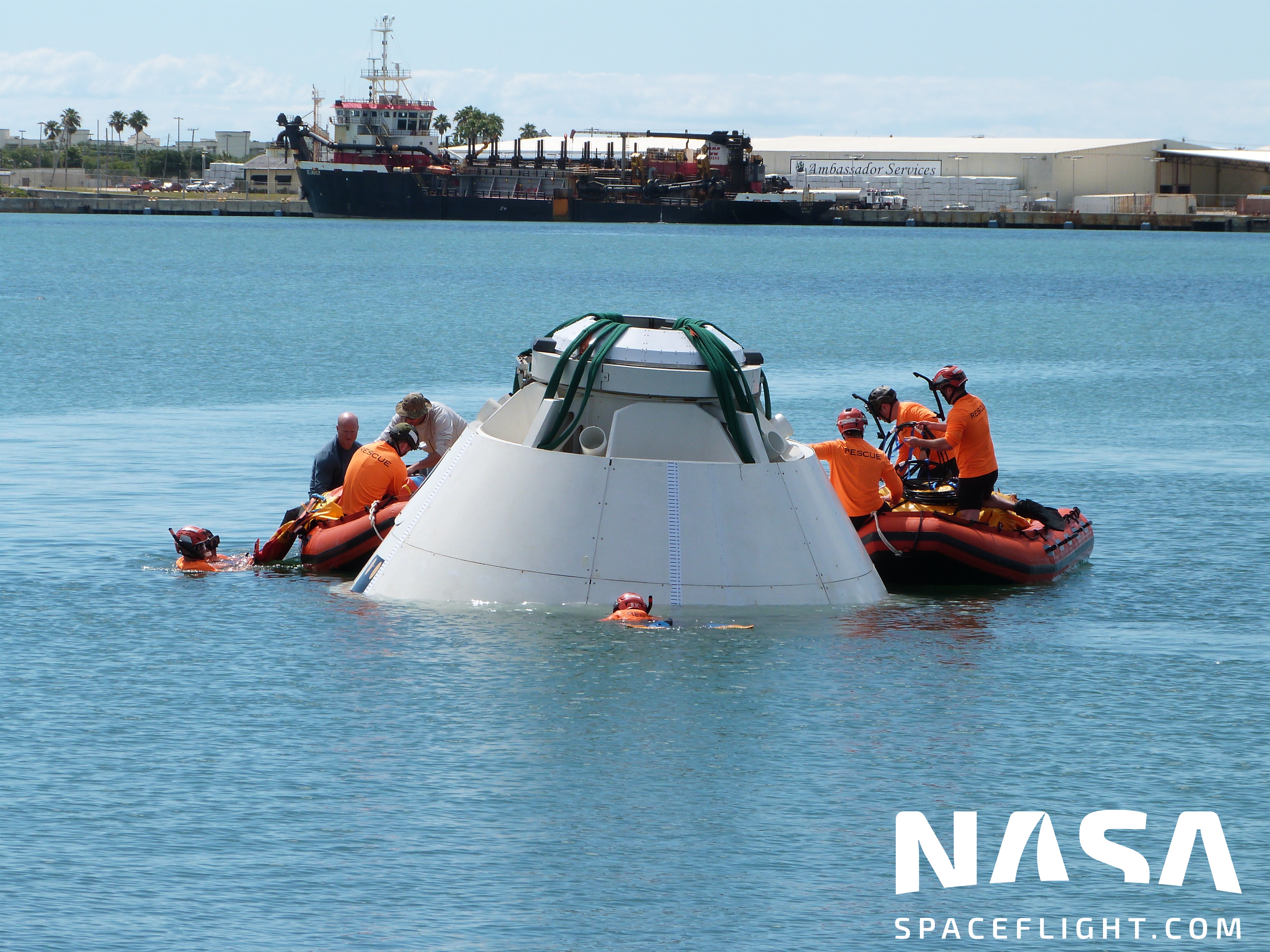 Teams finish attaching the stabilization collar to the base of Starliner. [Credit: Chris Gebhardt for NSF/L2]

“For launch, we’ll be stationed and all our equipment will be on the aircraft and ready to go.  We’re going to be in a 15-minute alert, sitting there ready to take off,” said Captain Fry.

“We’ll take off, and then as far as our actual deployment, once we get over sea and we can confirm that we’re actually looking at the capsule, then we’ll start throwing all our boats out and jump to it.”

The Patrick Air Force Base team will use either an HH-60 helicopter or a C-130 aircraft for their deployment to the rescue zone.

But for an aborting capsule that lands outside of the 200 nautical mile zone around Cape Canaveral, the Charleston, South Carolina, deployment would then be the primary response team.

The Charleston team will use a C-17 aircraft, faster and larger than the C-130, enabling them to reach downrange aborting capsules faster than the Cape Canaveral team once the 200 nm line is crossed.

The Charleston team would be responsible for reaching a spacecraft anywhere beyond the 200 nautical mile limit of Cape Canaveral Air Force Station all the way across the Atlantic on a northeasterly Space Station launch trajectory to just off the coast of Ireland. 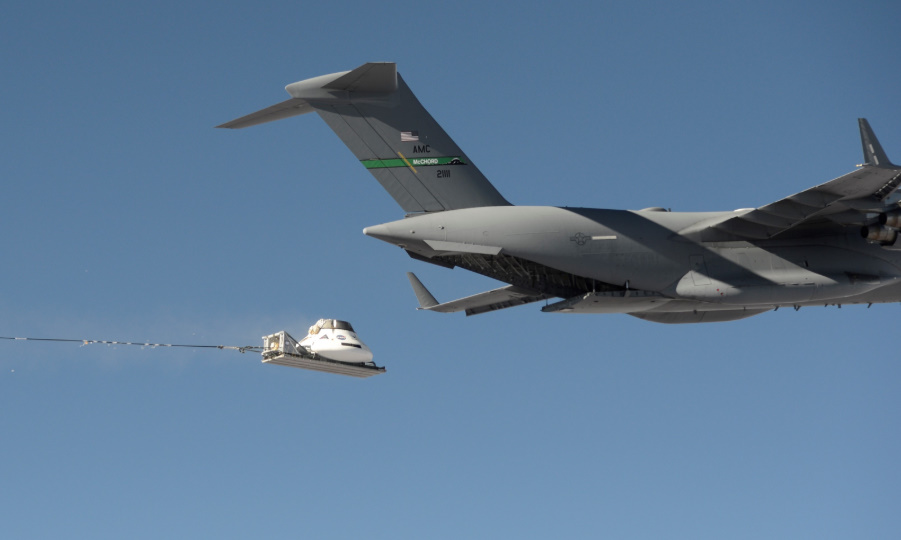 For Orion missions launching on much more easterly trajectories for lunar missions, the same 200 nautical mile rescue line would be observed, but it is important to note that the 200 nautical mile line is not a hard and fast limit.

Should a capsule abort and actually land 202 or 210 nautical miles downrange in the Atlantic, the Patrick team might still be the ones to deploy as opposed to the Charleston team based on day-of assessments of how quickly a team could reach the capsule.

Based on where Starliner, Dragon, and Orion will enter their preliminary orbits, the next likely emergency landing location should an emergency occur in the first few moments after orbit insertion would be in the Pacific Ocean, at which point the Hawai’i team would be the responsible unit for rescue and recovery of a crew.

For the Charleston and Hawai’i teams, their rescue plan calls for them to be on site with the hatch to the capsule opened within 24 hours of splashdown.

“The 24-hour requirement is that these guys need to be there … and open the hatch within 24 hours,” related Brent Maney, Space Medical Contingency Specialist for the Human Space Flight Support Medical/Rescue Division of the Department of Defense stationed with the 45th Operations Group, Detachment 3.

“The rationale for having the hatch open within 24 hours is because of the way the life support is set up.  If the crew has to stay in the vehicle and can’t get themselves out before [the rescue guys] get there, they only have a life cycle of about 24 hours.”

For the Hawai’i rescue team, analysis shows that they could take anywhere between 4 to 12 hours to reach a capsule splashing down in the Pacific.

Right now, the Indian Ocean is not planned as an emergency landing location, but should that need to happen, the Hawai’i team would be the responsible rescue party.

Moreover, Captain Fry related that it is actually more efficient for the rescue teams to be stationed on land than it would be for them to be pre-positioned at certain locations in the ocean.

“We would not be quicker out in the ocean because the capsule could land anywhere.  So if we’re in the ocean, it would take us significantly longer [to reach the capsule] than flying there,” related Captain Fry.

“You can only go maybe 20 knots with big ships, and we don’t own any of those.  But the aircraft that we’re flying can go 300 to 400 miles per hour and just fly right to the capsule.”

Regardless of what team is deployed, the worst case scenario is if a capsule lands and flips upside down in the water, known as the Stable II configuration.

Stable I is when the capsule splashes down and remains upright.

Stable II happened twice during the Apollo program, after the Apollo 7 and Apollo Skylab 4 capsules splashed down and flipped upside down in the ocean. 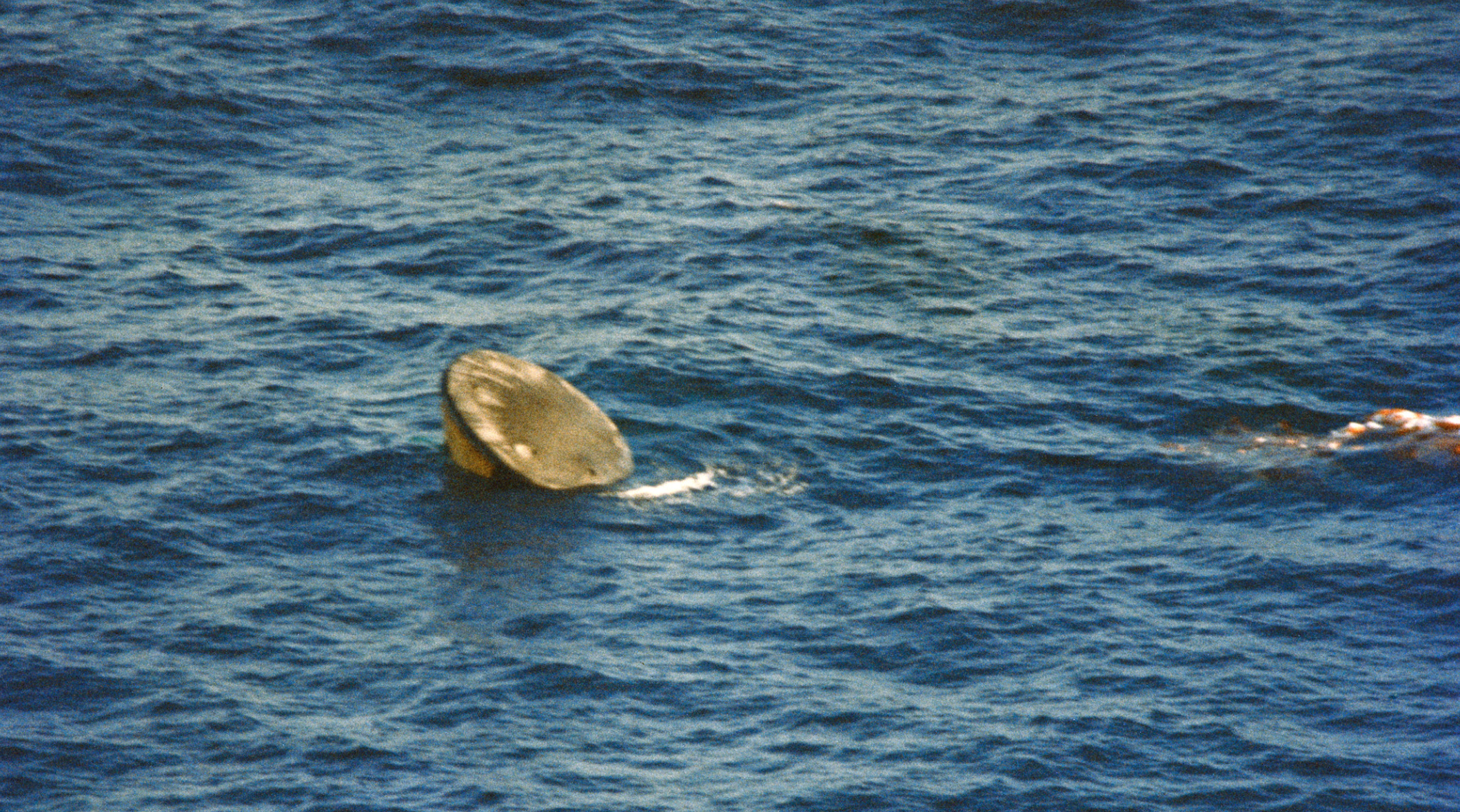 The extra stress this puts on the crew is one of the first and foremost reasons to quickly right the capsule.

After this, the stabilization collar would be attached to the bottom of a capsule and then the front porch deployed in front of the side hatch.

The front porch is a specially built life raft for the new U.S. crew vehicle emergency rescue operations; it can support a 9-person team with a 4-person crew for up to 72 hours as they await a rescue ship or rescue helicopter for transport back to land.

It can also serve as a medical triage facility for any injured crewmember.

More so, an interesting element to these at sea rescues is the role weather could play.

For on-pad aborts or aborts shortly after liftoff, odds are the weather would be perfectly acceptable or at sea rescues or at least would clear quickly enough to meet the safety standards set by NASA, the DoD, and the various crew capsule programs.

But farther down range aborts along the ground track could result in a capsule splashing down in the middle of weather systems over the Atlantic.

In this particular case, pre-launch day-of considerations would have to be made by the Department of Defense and NASA as to what risk they are willing to accept should a crew capsule splashdown in one of these inclement weather areas during an abort.

The 304th rescue squadron itself also has the ability to make a call on weather conditions they believe are too dangerous for their teams to operate in.

“I’ve been in 15-20 foot seas doing training missions,” said Captain Fry. “But there are some weather constraints.  For our parachute systems, we can’t parachute through lightning, and if it’s pouring down rain that would also affect our parachutes.

“Sea states [are also a concern].  If [they] get real big, we have to start weighing that risk and reward of ‘are we going to be able to survive going into that situation.’” 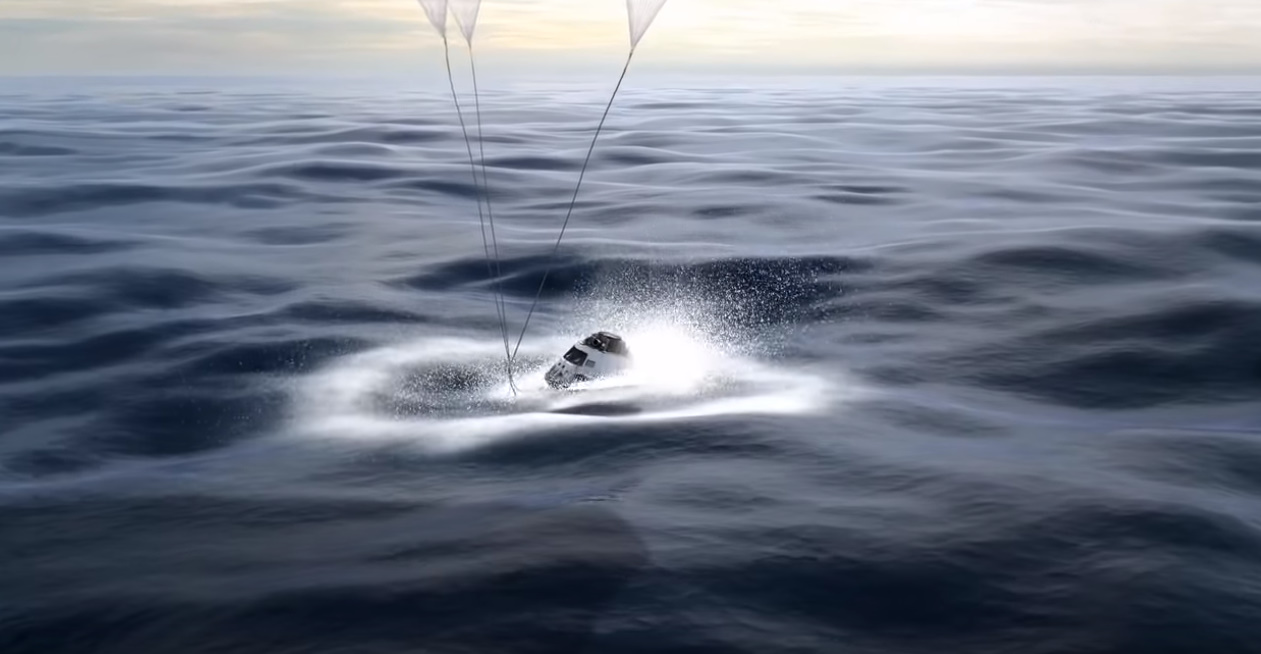 Orion after splashdown – via NASA

Brent Maney added, “There’s a whole risk mitigation process, and NASA and the DoD accept that risk.  So one of the things our team goes through is that the day of launch, day of landing, there’s an entire process of looking at the global weather along the landing track and analyzing whether it’s worth the risk.

“So it’s just a risk mitigation process.  It’s all coordinated in advance.”

Regardless of the weather, the team did make clear that their only concern is the rescue of the crew, not the recovery of the capsule.

This means that if a Starliner, Dragon, or Orion vehicle lands hundreds or thousands of kilometers downrange from its launch site, the rescue team would leave it floating by itself once their mission of recovering the crew is complete.

Recovery of the capsule would then fall to NASA for Orion, SpaceX for Dragon, and Boeing for Starliner.