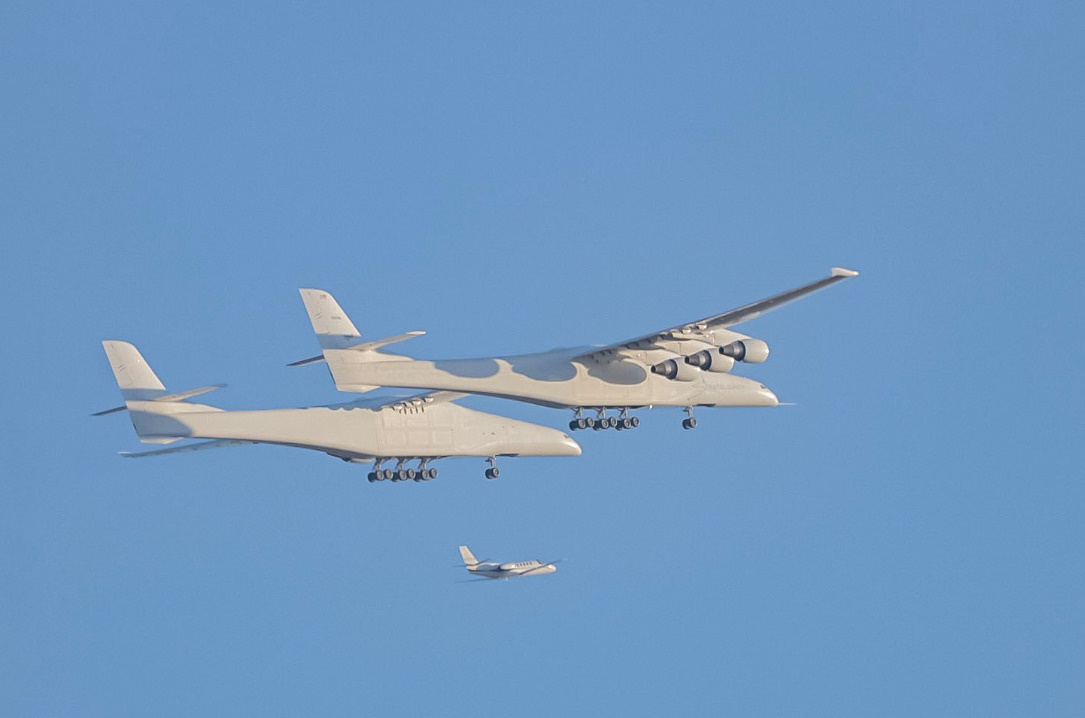 The “Roc” –  Stratolaunch Systems Corporation’s air-launch carrier plane – has conducted its first test flight over the Mojave Desert in California. The world’s largest plane has been years in development ahead of Saturday’s major milestone as it flew for 2.5 hours without issue. It will eventually carry up to three Pegasus rockets, the first two of which are now being assembled at Vandenberg Air Force Base.

The company was founded in 2011 by the late co-founder of Microsoft Paul Allen with plans for a new air launch system.

Since founding, progress has been evident in the incremental testing of the carrier aircraft on the ground. First, the aircraft was brought out of the hangar for the first time to test fuel systems. Engine testing followed, then low-speed taxi tests.

Initially, Stratolaunch planned to work with SpaceX to develop a launch vehicle, notionally called the Falcon 5. The goal was to build a four or five engine variant of the Falcon rocket designed for air-launch. However, work between the companies ended in 2012, after SpaceX determined that too many modifications were required.

As a result, Orbital Sciences (now Northrop Grumman) was selected to replace SpaceX. Unlike SpaceX, Orbital already had a proven air-launch vehicle in the Pegasus – a rocket with 29 successful launches in a row.

Last August, two sets of Pegasus motors arrived at Bldg 1555 at Vandenberg Air Force Base, per L2 information. They have since entered production for build up processing last month.

Stratolaunch will carry the Pegasus from a carbon fiber aircraft designed by Scaled Composites – the same company that built WhiteKnightTwo (WK2) for Virgin Galactic. Like WK2, the Stratolaunch plane features a dual fuselage design. 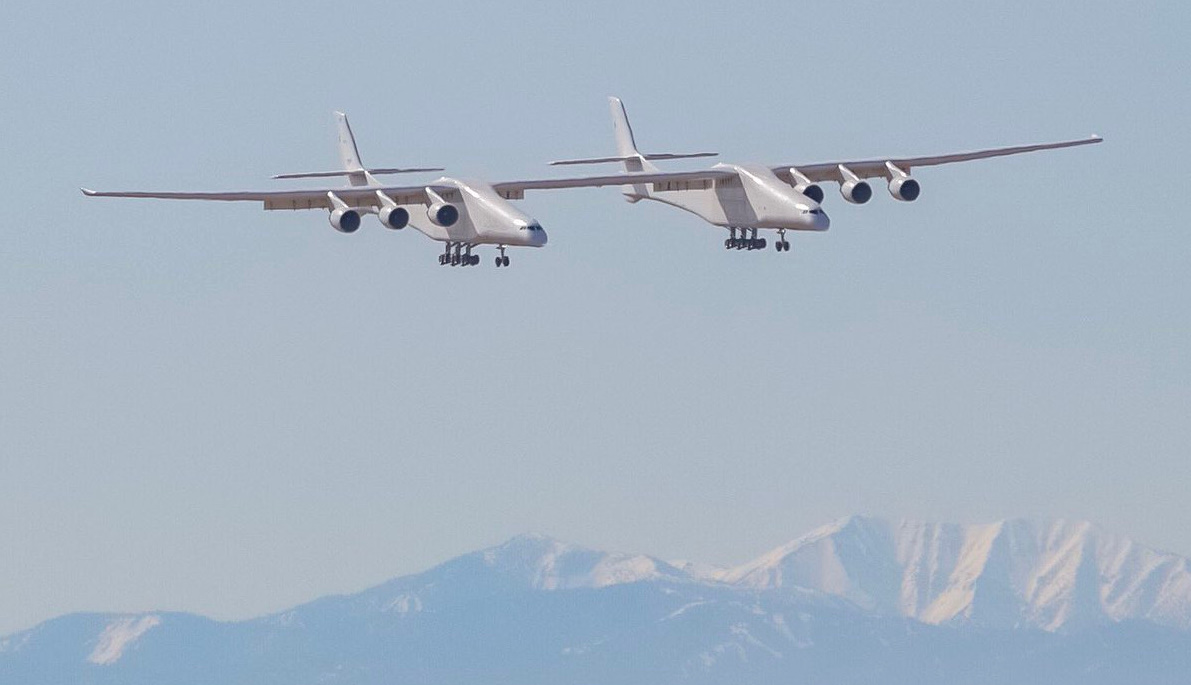 Roc on her test flight – via Jack Beyer for NSF/L2

While both fuselages on the carrier have windows, the three-person crew will fly in the right fuselage. The left fuselage is not human rated and thus will only house electronics.

The plane is propelled by six jet engines which have been salvaged from two 747s. Additional components from the 747s were also utilized, including landing gear, windows, avionics, and actuators.

The wingspan of the carrier aircraft is a world record breaking 385 feet (117 meters) – long enough for the Wright brothers to complete their historic flight three times. Additionally, it also makes the carrier wider than the Saturn V rocket is tall.

In addition to the massive wingspan, Stratolaunch has a carrying capacity of 549,290 pounds (249,153 kilograms) and a 1,000 nautical mile mission radius. These metrics will enable up to three Pegasus rockets to be launched in a single flight. They also create the potential for larger launch vehicles to be launched from the aircraft, as the plane is not exclusively designed for Pegasus.

These launch architectures differ from traditional vertically launched rockets in that they are carried above the densest part of the atmosphere by a carrier aircraft, before being released to launch to space.

This lowers the cost needed to escape Earth’s atmosphere by utilizing less costly jet fuel and a reusable carrier aircraft. It also avoids many weather restrictions present in lower parts of the atmosphere and offers more flexibility for launch inclinations than fixed launch pads.

The Roc had been spotted outside of its massive hanger several times over the past few weeks, even watching a test flight of its “rival” air-launcher, Cosmic Girl, which will be carrying the LauncherOne rocket in the coming months. 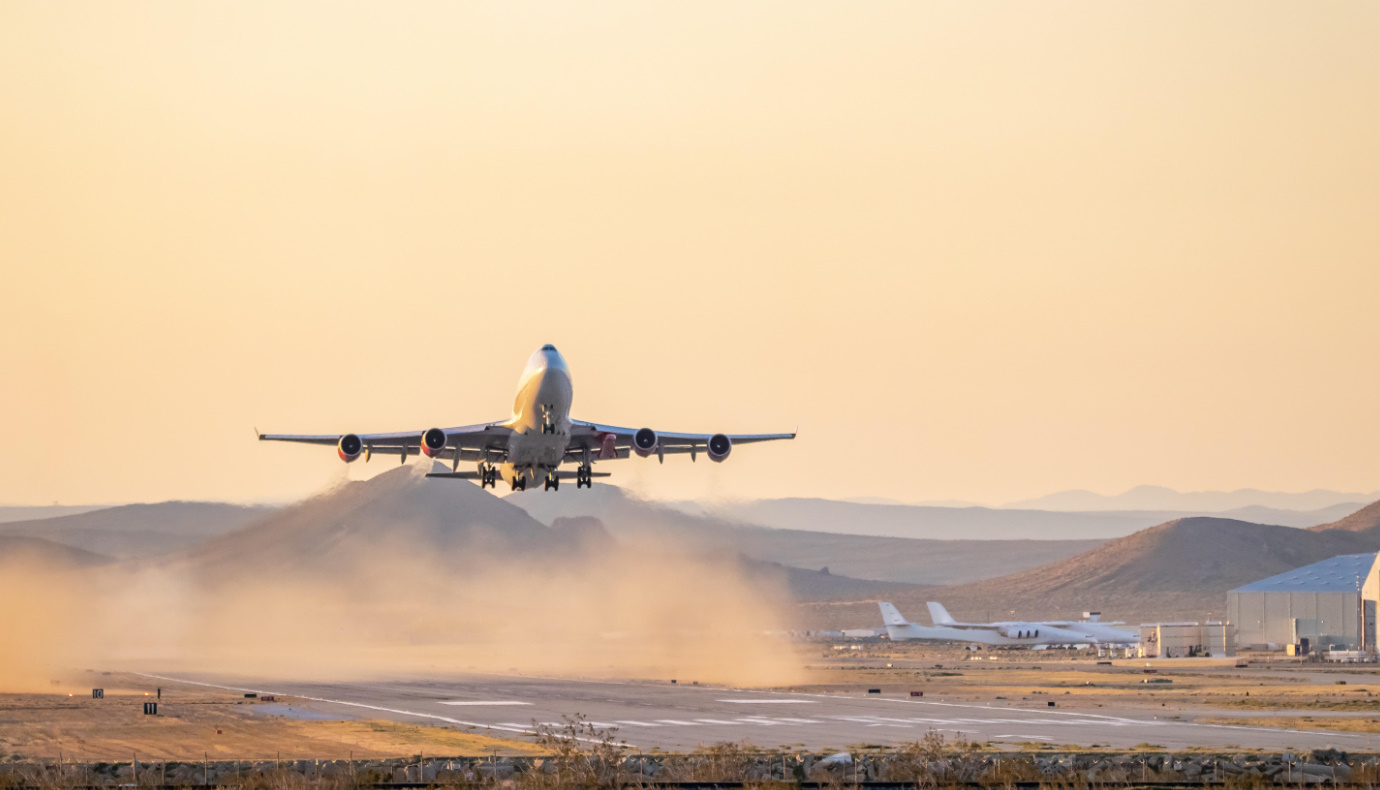 However, on Saturday, it was the Roc’s turn, with rollout to the runway taking place early during the Californian morning.

The Stratolaunch aircraft then took flight at 0658 PDT from the Mojave Air and Space Port. Achieving a maximum speed of 189 miles per hour, the plane flew for 2.5 hours over the Mojave Desert at altitudes up to 17,000 feet.

“The Scaled team excels at tackling the hardest problems in aviation. We have test flown an average of one new aircraft type per year over our 37 year history,” said Cory Bird, president of Scaled Composites. “Together with Stratolaunch, we have reached another aviation first by flying the world’s largest all‐composite aircraft and moving closer to increasing the accessibility of space launch.”

As part of the initial flight, the pilots evaluated aircraft performance and handling qualities before landing successfully back at the Mojave Air and Space Port.

During the test, the aircraft performed a variety of flight control maneuvers to calibrate speed and test flight control systems, including roll doublets, yawing maneuvers, pushovers and pull-ups, and steady heading side slips. The team also conducted simulated landing approach exercises at a max altitude of 15,000 feet mean sea level.

Per notes from Scaled Composites, the plane, piloted by Evan Thomas and Chris Guarente, refined flight data noted the plane flew for 149 minutes, reaching a max speed of 165 KIAS before landing safely at 0927 PDT.

“Today has been great. The airplane flew as predicted. It was a very smooth flight and the team had a lot of fun,” said Test Pilot Evan Thomas. “This flight really is a tribute to the hard work of all of the men and women who have worked tirelessly over the years making this program a reality.”

“What a fantastic first flight,” said Jean Floyd, CEO of Stratolaunch. “Today’s flight furthers our mission to provide a flexible alternative to ground-launched systems. We are incredibly proud of the Stratolaunch team, today’s flight crew, our partners at Northrup Grumman’s Scaled Composites and the Mojave Air and Space Port.”

The milestone came after the passing of Paul Allen, who envisioned the air launch company under the Vulcan Inc. umbrella.

“We all know Paul would have been proud to witness today’s historic achievement,” said Jody Allen, Chair of Vulcan Inc. and Trustee of the Paul G. Allen Trust. “The aircraft is a remarkable engineering achievement and we congratulate everyone involved.”