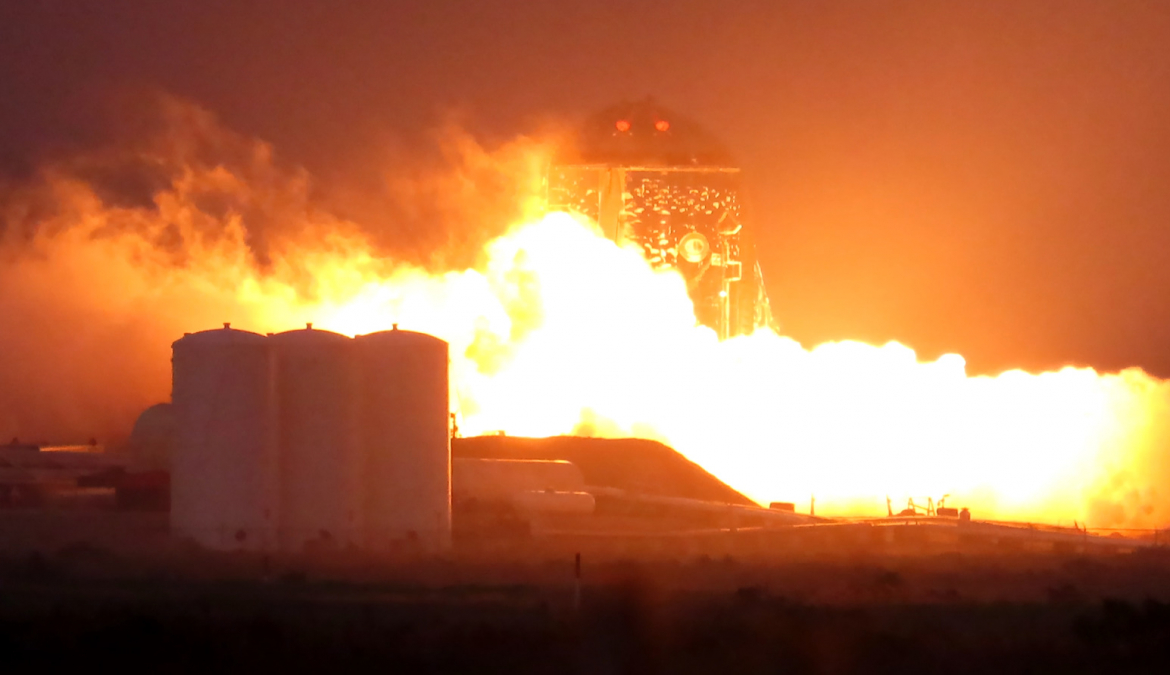 Testing of SpaceX’s Starhopper suborbital vehicle in Boca Chica, Texas, achieved a new milestone on Wednesday evening with a Static Fire test of its Raptor engine. The test comes after over a week of Wet Dress Rehearsals (WDR) and pre-burner tests. Thursday would have technically resulted in its first hop, albeit by just inches due to being tethered to the pad. A second hop on Friday night resulted in a visible hop.

SpaceX’s Starhopper is ramping up test operations at Boca Chica, Texas, ahead of what’s anticipated to an incremental series of testings, firings and hops.

In the opening days of the testing sequence, observers at the east Texas test and launch facility documented numerous cryogenic tests of Starhopper’s propellant tanks that hold Liquid Oxygen (LOX) and Liquid Methane to fuel the vehicle’s Raptor engines.

These tests involved fueling Starhopper with LOX and liquid methane and testing the pressurization systems, observed via icing of propellant lines leading to the vehicle and the venting of cryogenic boil off at the launch/test site.

These tanking and pressurization tests occurred after Starhopper was transported from its build location to its launch/test stand down the road and proceeded without any of the vehicle’s Raptor engines installed, something Elon Musk noted would happen in short order.

This was followed by visual confirmation of the first Raptor engine’s arrival at the Texas site and subsequent installation to Starhopper.

In quick order, residents of Boca Chica Village were notified via mail of imminent tests and road closures that would occur as early as the week of 18 March.

This indicated that no guests will be allowed past the security checkpoint during the flight test operations of Starhopper.

With the recent arrival and installation of the first Raptor engine into Starhopper, there was speculation as to whether the test Boca Chica residents were told of would be a hold down static fire or the first hop of Starhopper.

Elon Musk confirmed via Twitter that it would “hopefully” be a hop – but only a barely getting off the ground hop and not a low-altitude suborbital hop.

Those suborbital hops require all three of Starhopper’s Raptor engines be installed.

This is quite a departure from how SpaceX has previously proceeded with vehicle testing – forgoing a hold down static fire and instead allowing the single Raptor to lift Starhopper off the ground – albeit only slightly – on its very first integrated firing.

In January, Mr. Musk indicated that Starhopper flight tests could begin as soon as February-March 2019 – which might come true – if no unforeseen circumstances occurred.

A significant storm impacted the Boca Chica test site earlier this year – knocking the top of Starhopper over and damaging it; it was thought that this would require a rebuild to the nose cone. 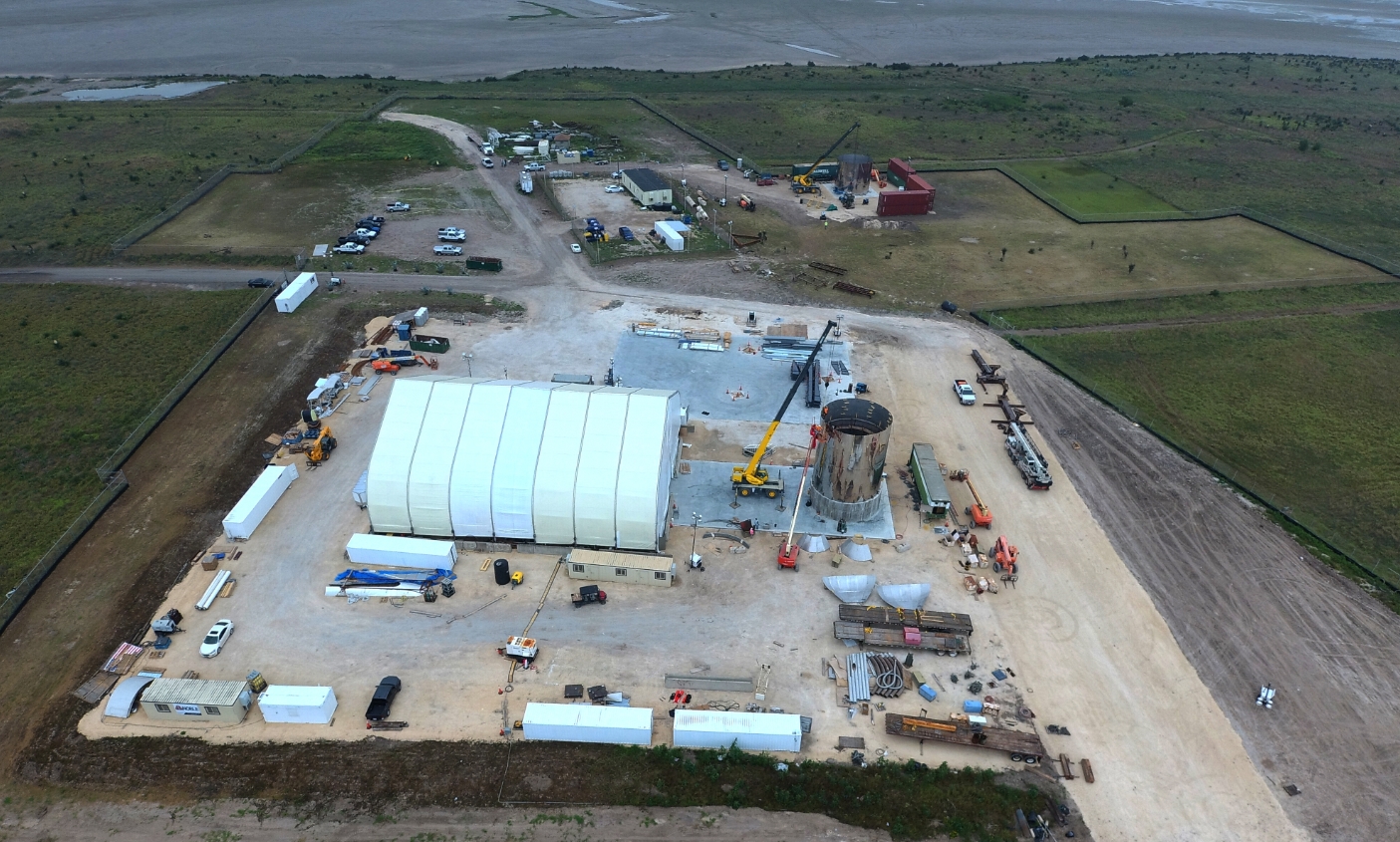 But Mr. Musk noted on Twitter (17 March) that the company is no longer building a nose cone for Starhopper – that they “don’t need it” – and that the additional construction seen at Boca Chica of late is actually for the first orbital Starship vehicle.

During a period of over a week, StarHopper underwent almost daily tanking tests, WDRs and a few pre-burner tests. Some of these tests worked to mitigate an issue with ice formations on the prevalves, as noted by Elon Musk a few days ago.

Then, on Thursday, came the milestone of the first Raptor firing on the Hopper.

The firing appeared to last a few seconds and was classed as “green” per an Elon Musk tweet shortly after the firing. Mr. Musk described it as the first hop, although that wasn’t noticeable on video acquired by NSF’s BocaChicaGal, a local resident who has been taking a series of photos and videos of SpaceX’s Boca Chica site for this site.

That was not unexpected, given the Hopper is tethered and would have only hopped a few inches on this initial test. Once the tethers are removed, Hopper will hop several feet and then at incrementally larger altitudes.

This time Hopper did actually hop to the maximum allowance of her tethers, which will have been about three feet in height.

The SN3 Raptor is already undergoing testing at SpaceX’s test site in McGregor, Texas – as spotted from the air by NSF’s Gary Blair (L2 McGregor section).

Meanwhile, as Starhopper continued toward its inaugural test at Boca Chica, Elon Musk spent some time answering questions on how the design of Starship continues to evolve, albeit not as drastically as it has before – a good signal that the design iteration phase is coming to completion as build operations begin. 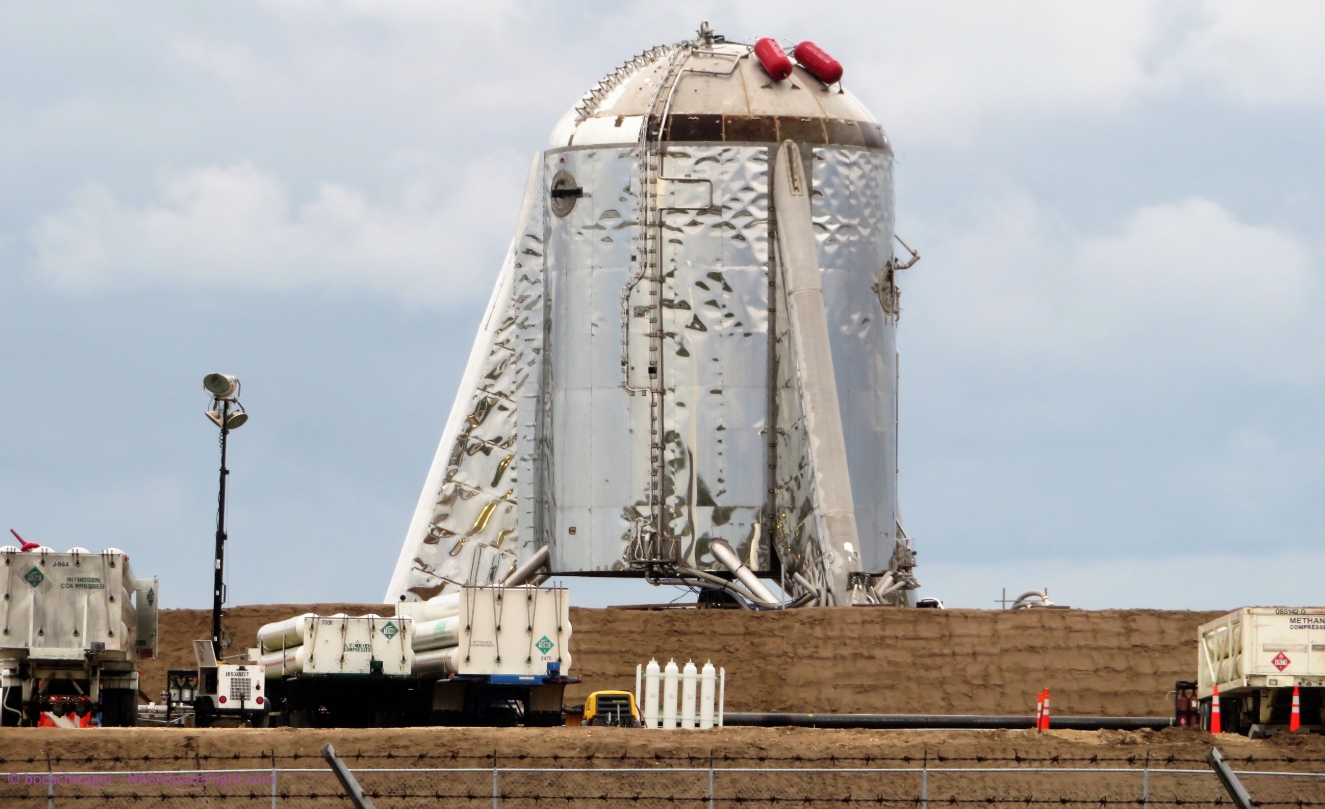 Specifically, two intriguing and important pieces of information about Starship and Super Heavy were revealed by Mr. Musk at the weekend: 1) a heat shield will be used on the windward side of Starship and 2) SpaceX is seeking regulatory approval to launch and build Starship/Super Heavy in both Texas and Florida.

Per a Twitter post on 17 March 2019, Mr. Musk released a video of SpaceX testing the Starship heat shield hexagonal tiles that will blanket the windward side of the vehicle; these tiles will take the brunt of reentry heating.

Via the Twitter update, Mr. Musk noted that the tiles passed their testing with flying colors, reaching white-hot orbital entry temperatures of roughly 1650 Kelvin (1,377 ℃ – or 2,510 ℉).

Mr. Musk also revealed the hexagonal shape was chosen as it does not allow a straight path for hot gas to accelerate through any gaps in the heat shield – a critical component for reentry heating protection.

Furthermore, Musk reiterated that the leeward side of Starship will not require any heatshield at all thanks to its stainless steel construction and that any hot spots observed during testing will have transpiration cooling added to them.

Transpiration cooling is the act of pumping coolant – in this case, liquid methane – through the skin structure of Starship to absorb additional heat in particular areas of the vehicle during reentry.

Musk noted that these changes to Starship were needed to ensure that it could “fly again immediately after landing” with “zero refurbishment.”

As part of the Twitter update extravaganza, Mr. Musk also confirmed to NASASpaceflight’s Michael Baylor that SpaceX is working on regulatory approval to fly orbital missions of Starship from both Boca Chica, Texas, and “Cape Kennedy, Florida.”

He also confirmed that the company would build Starship and Super Heavy simultaneously in both locations, thus eliminating the need for lengthy transport of the huge vehicles from California.

Curiously, Elon’s use of “Cape Kennedy” nomenclature did not reveal whether Starship would be launching from the Cape Canaveral Air Force Station or from the Kennedy Space Center.