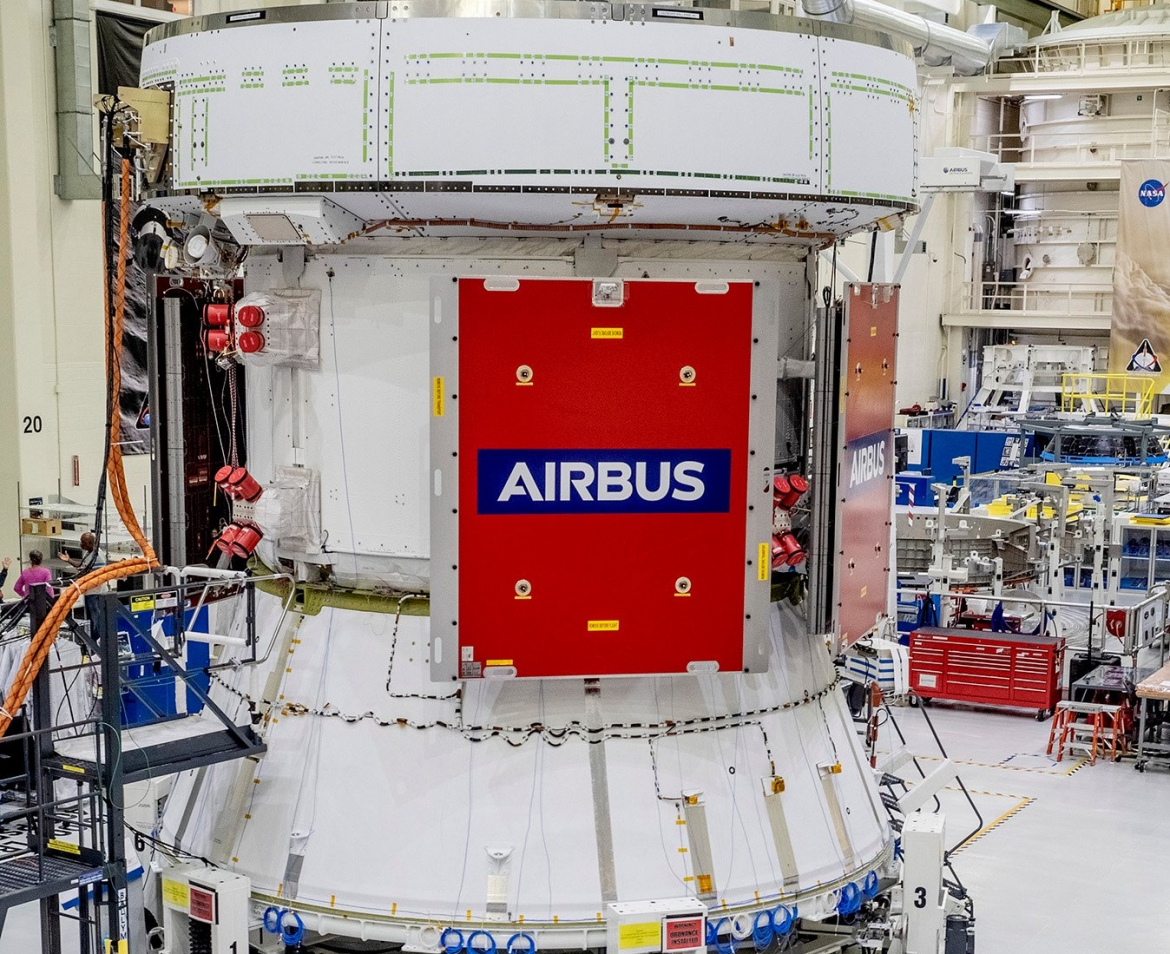 NASA’s Plum Brook Station in Sandusky, Ohio, is finishing preparations for pre-flight testing of the Orion spacecraft assigned to Exploration Mission-1 (EM-1). The Space Environments Complex of the Glenn Research Center test facility will be used to put the in-space configuration of Orion through thermal vacuum and electromagnetic testing that should take a few months.

Plans are to checkout different Orion systems and subsystems in varying thermal conditions during a continuous, two-month long period with the spacecraft at vacuum. Following those tests and some reconfiguration, electromagnetic inference/compatibility (EMI/EMC) testing will be conducted in the same test chamber.

The EM-1 spacecraft is currently in final assembly at the Kennedy Space Center (KSC) in Florida; this vehicle for the second Orion flight test will be the first with working versions of both the Crew and Service Modules. Standalone testing of the modules is almost complete, and the next round of integration and testing brings the modules together for final mating. Once connected and checked out, the Orion will be packaged for a Super Guppy flight to Plum Brook, currently expected late in the Summer.

The EM-1 Orion spacecraft will be tested in the Space Simulation Vacuum Chamber at Plum Brook’s Space Power Facility. “During EM-1 testing we’re going to be performing really two types of testing, so we’ll have [the] thermal vacuum portion of it and then the EMI/EMC portion of it,” Nicole Smith, NASA’s Project Manager for Orion Testing at Plum Brook Station, said in a recent interview.

“We’re trying to correlate the models of the hardware thermally and also thermally stress the vehicle in both the cold and the hot cases, within the limits of what a facility can do. With the EMI/EMC testing, we’re going to provide an RF (Radio Frequency)-quiet environment so that we can test the intra-system compatibility and then we’ll also provide an RF environment and a reverberant environment to be able to test external sources, RF sources.”

The spacecraft will be oriented vertically in the large vacuum chamber on a stand, surrounded by thermal conditioning equipment. “The chamber itself is about a hundred and twenty feet tall and a hundred feet in diameter,” Smith noted. “Inside of that chamber we have a cryo (cryogenic) shroud that provides the cold background of space. We can take that down to about minus two-hundred fifty [degrees] Fahrenheit but for this test I think we’ll be at about minus a hundred Fahrenheit, so we’ll just maintain that constant background.” 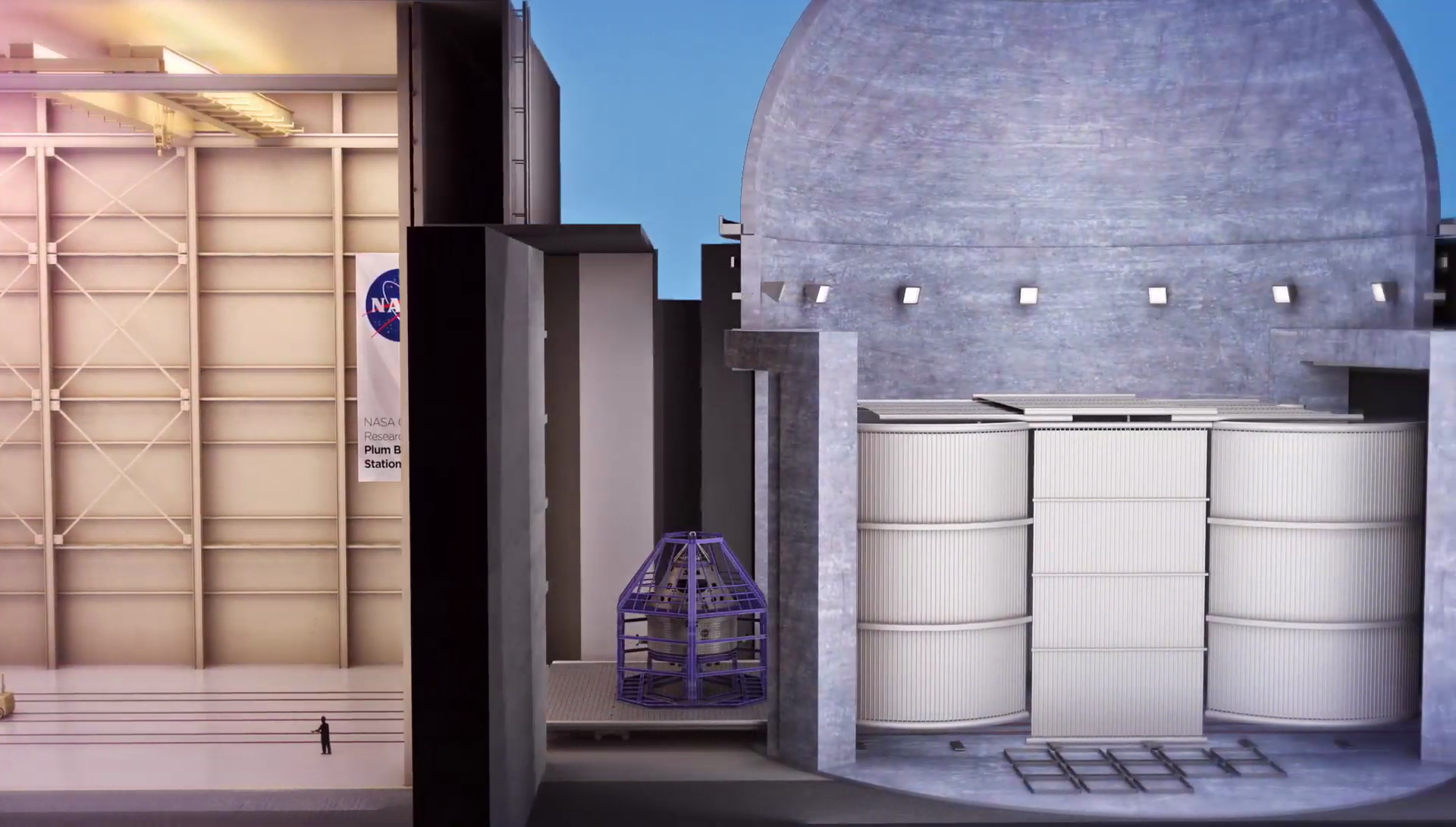 (Photo Caption: Animation showing the EM-1 Orion spacecraft moving into the vacuum chamber at Plum Brook. To the right, the cryo shroud is shown open to move Orion inside. The shroud helps simulate in-space thermal conditions within the vacuum chamber.)

“The cryo shroud kind of looks like a canister, forty feet in diameter and forty feet tall and then it also has a ceiling and a floor and both the ceiling and the floor are also cold walls,” she explained. “So when you see the animation or pictures you’ll see the spacecraft looks like it’s sitting on a big floor which is the cryo floor and there’s a number of different things that are kind of stacked up on it, various types of GSE (Ground Support Equipment) like the cone spacer stand that it sits on.”

“We also have a lot of other heaters, we have aft heater plates that are underneath the vehicle,” Smith noted. “On that heat flux system that is all around really the Crew Module and then underneath of that are the baffle plates. On the underside of the baffles is where we have the baffle heaters.”

“And then we have a lot of others in the chamber which are really support stuff, because we’re trying to prevent large thermal masses from altering what the vehicle is seeing and making it a test condition versus a flight, more-realistic condition,” she said. “So we have all of these cables that go to the vehicle for EGSE (Electrical Ground Support Equipment), like at the T-0 panel; we don’t want those cables to get super cold and create a thermal sink basically, so we do put heaters on those to kind of bring them up to a temperature that is not going to cause a test-specific effect to what the spacecraft is seeing.” 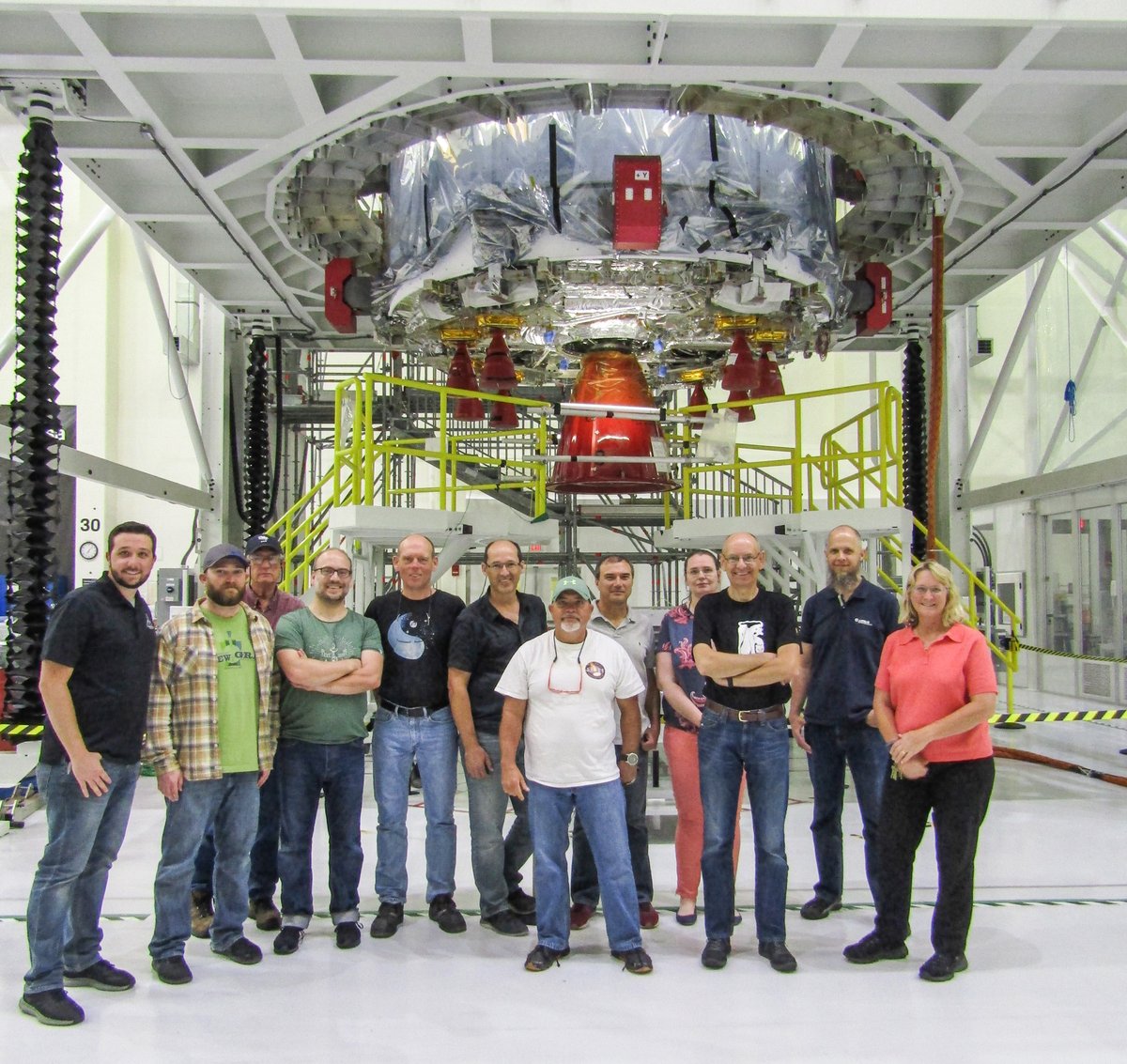 (Photo Caption: Orion team members at Kennedy Space Center in front of the EM-1 Service Module in April after installation of the nozzle on the OMS-E main engine. Additional hardware is currently installed for testing at KSC, but this is closer to the configuration of the Service Module for the testing that will be performed at Plum Brook later this year.)

To better simulate the space environment where most of Orion’s mission will occur, the pressure in the chamber will be reduced to almost zero. “[For] the inner chamber we pump down to about three times ten to the minus six (3 × 10-6) Torr for that,” Smith explained. “It’s 5.8 times ten to the minus 8 (5.8 × 10-8) psi, so it’s a lot of zeros. Usually when I talk to kids I count on my fingers all the zeros that has.”

The spacecraft will be run through different thermal profiles while the chamber remains at vacuum. “It’s going to be one continuous pump down, so we’re looking at the chamber pumped down for about sixty-five days, so it will be one, continuous test,” Smith said.

The vehicle will be in an in-space configuration; the mated Crew and Service Modules won’t have any of the launch system fairings or adapters attached. The nozzle for the main OMS-E engine will be attached, but the Orion will be missing its solar array wings.

“There’s an emulator for it, [the acronym] stands for ‘front-end emulator,'” Smith noted. “It emulates what the solar array wing would actually do. “While it’s in the chamber as part of the testing I do know that they’re going to actually rotate the solar array drive mechanisms, so I know they’re going to do that kind of what I call first motion because that usually refers to unfurling a solar array but actually it checks out that it’ll work in the environment.” 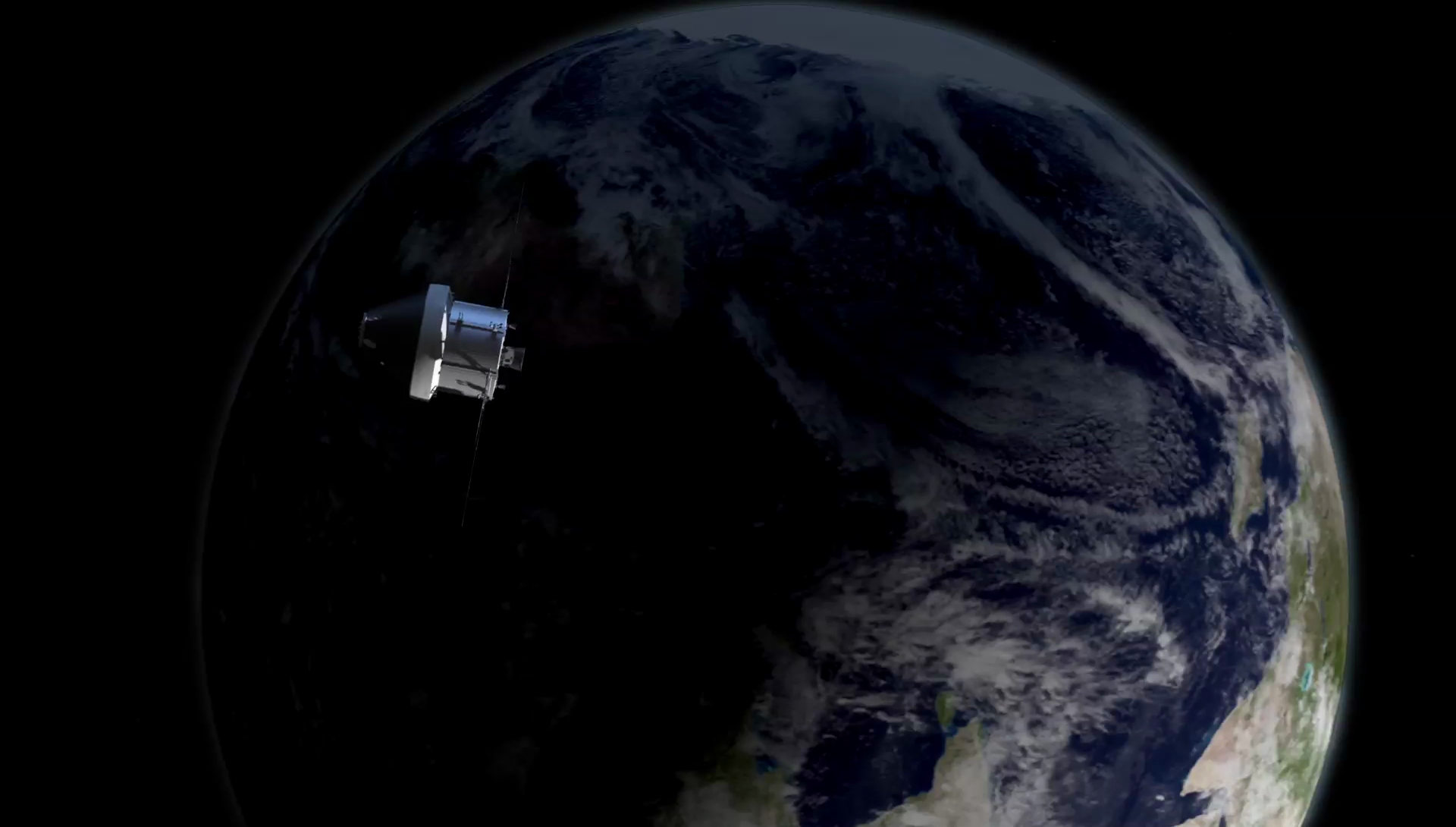 Animation depicting the tail-to-Sun attitude that Orion will be in during most of its mission. Credit: NASA.

While flying on its own, Orion will spend most of its time in a tail-to-Sun attitude, such as during transit to and from the Moon and in different lunar or cislunar orbits.

“So we have the thermal balance, we do a first, short cold stress from there which is really in an eclipse case, and then we do a hot stress and then we go back down to a cold [test case], and then a hot, and then we come back to ambient and end the test,” she explained. “During that time that we are providing that sort of an environment to the vehicle, the vehicle is going to be doing a number of different things functionally.”

“It’ll be powered up, they’ll be powering on and off some of the hardware, they’ll be checking out things like prop valves, the avionics are going to be on, they’re going to be turning heaters on and off,” she added. “During the thermal balance, they’ll actually depress the crew cabin and it’ll stay depressed all the way until the second cold cycle and then we’ll repress the cabin.”

“We’re going to do that so we can see the cabin depress during the extreme [thermal] stress conditions so they can check that out.”

“We’ve got a little initial functional tests that we’ll do and then we’ll drop the temperature and then through the thermal balance that’s about roughly the first twenty days or so,” Smith said. “Then the cold soak is going to be another five days and then while we raise the temperature to the hot stress and you’re probably looking at another five to seven days for just raising the temperature.” 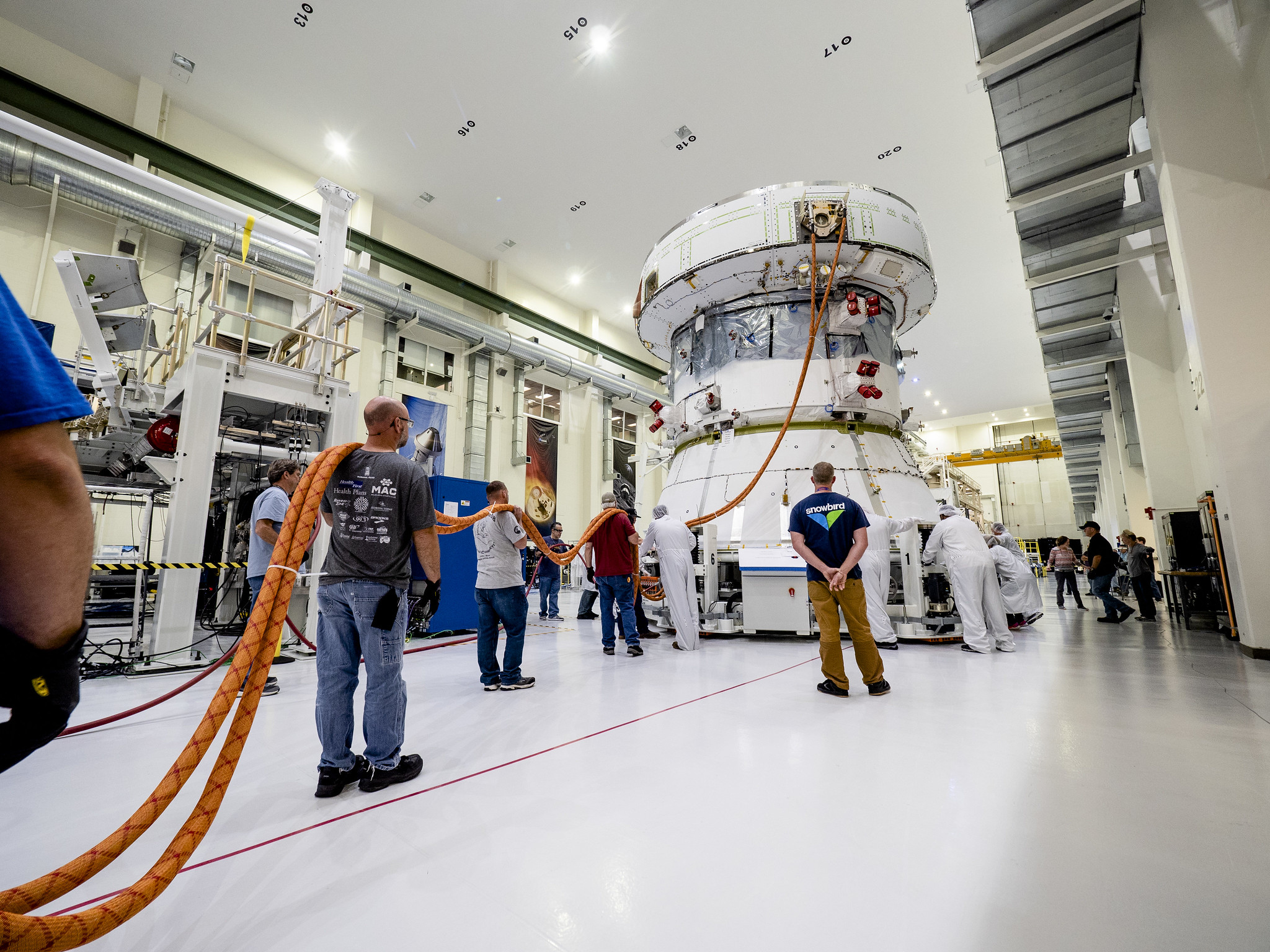 (Photo Caption: Lines running to the Orion Service Module Umbilical are carried along with the EM-1 Service Module as it was moved down the aisle in the O&C Building at KSC in late April. EGSE will also be hooked to the Orion during testing at Plum Brook, in part substituting for the solar array wings that won’t be installed.)

A lot of other EGSE is also connected for the tests at Plum Brook. “There’s quite a bit of EGSE that comes along with the spacecraft that we have a whole room dedicated to,” Smith said. “We do have test specific lines that go to the vehicle, one of them is R134a coolant, ground cooling that goes to the vehicle that we use for the beginning part of the test and then we turn it off, and then we have the CM (Crew Module) depress lines that I was telling you about, and there is a lot of EGSE that is supporting the vehicle that is test-specific that does go through the chamber to the vehicle that you wouldn’t necessarily see during [flight].”

The cryo shroud and heat flux system produce the desired test conditions during each phase of the vacuum testing. “So for example the tail to Sun, we have aft heater plates and then we have heaters that are on what are called baffle plates that are up around the Crew Module Adapter and so during the tail to Sun we’ll have the cold background with the cryo shroud but we’ll have those two sets of heaters on, so basically heating the aft side of all that’s going to be exposed to the vehicle,” Smith explained.

“With the hot stress that I was talking about we have [the] heat flux system which are basically calrods or wall rods that go all the way around the Crew Module, so all that will be on. We’re really testing for the stress situations, cold shock and hot stress.”