NASA Moving Ahead with Return to the Moon, with or without SLS 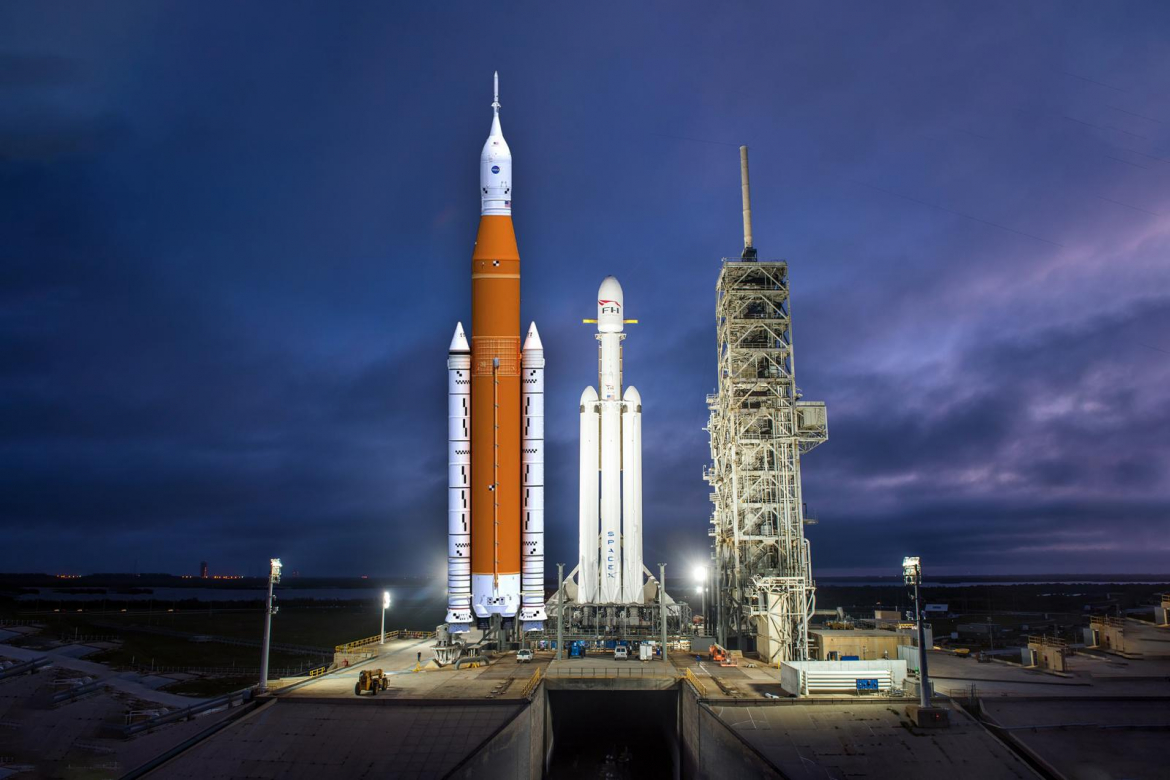 NASA has been tasked with returning humans to the surface of the moon by 2024. Delays to Boeing’s Space Launch System (SLS) rocket have prompted various ideas for making up lost time, and even the consideration of alternative launch vehicles. Just as critical to humanity’s return to the moon is the development of the Lunar Gateway space station and the Human Landing System (HLS).

Six companies are actively developing concepts for a deep space habitat. Crews would travel between Earth and the Gateway aboard the Orion spacecraft, either to conduct research in lunar orbit, travel to the surface aboard a lander assembled at the Gateway, or possibly to begin future missions to Mars.

In addition to the American modules being procured from these companies, NASA’s international partners will contribute components to the Gateway, including the European ESPRIT module and a robotic arm provided by the Canadian Space Agency.

The Gateway concepts and prototypes under development right now are not intended to compete for selection for flight, at least not yet. Only proposals for the first U.S. component, the Power and Propulsion Element, has been officially requested, with an expected selection around the end of May.

Before releasing a request for proposals for the other elements of the Lunar Gateway, NASA is testing and studying designs to inform the requirements for such a solicitation. While the current proposals are for an entire Gateway, NASA will not necessarily select one company to build all of the station’s elements.

Of the six companies with Gateway concepts in development, five have already completed full-scale prototypes for testing by NASA. One such prototype is Sierra Nevada Corporation’s Large Inflatable Fabric Environment (LIFE) habitat. LIFE will be trucked to NASA’s Johnson Space Center in Houston and reassembled by Sierra Nevada and NASA personnel over the course of three weeks. NASA astronauts have a key role in studying and testing all of the Gateway prototypes. 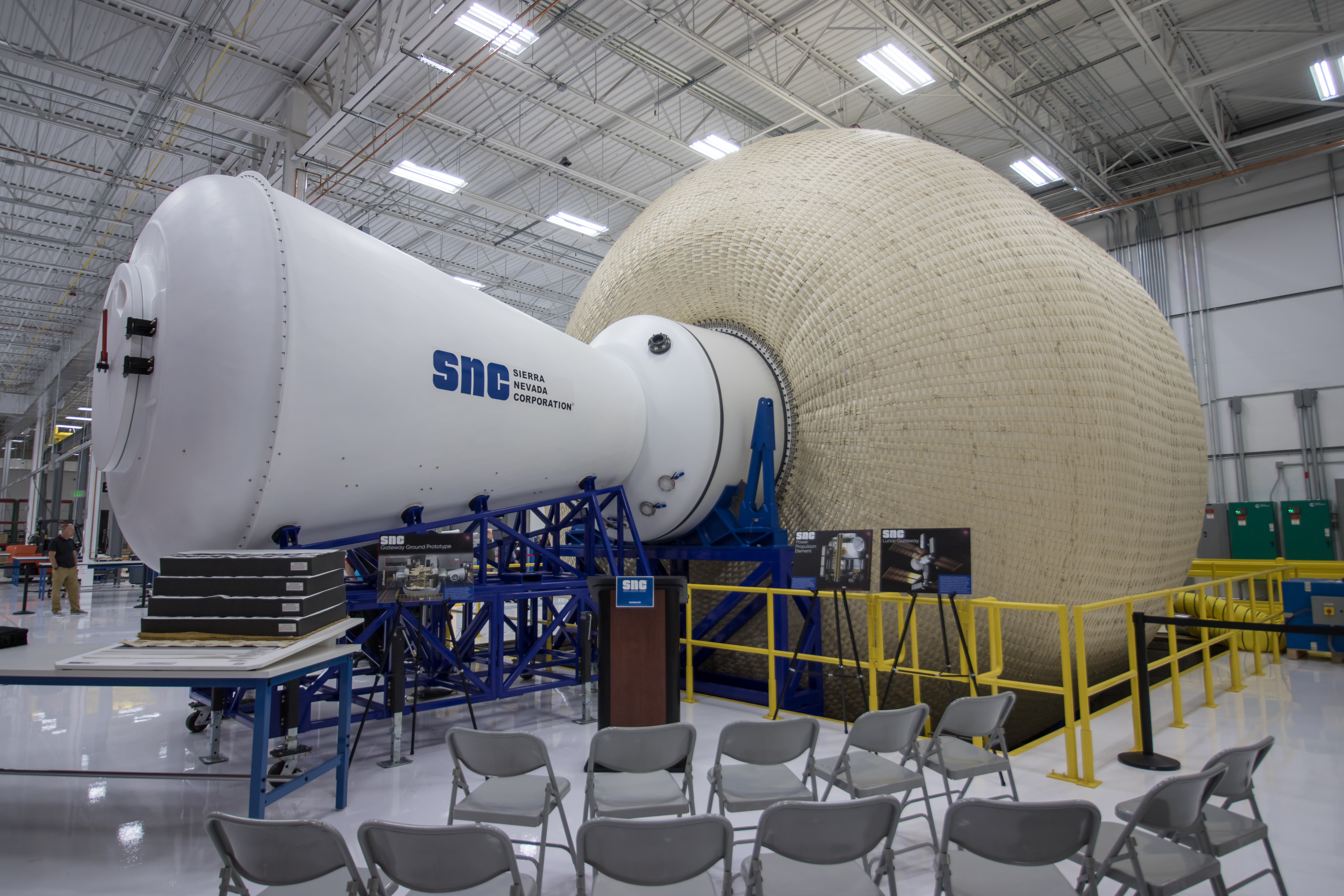 By inflating the module in orbit, the spacecraft can be launched in a compact form and be inflated to be much larger than traditional, rigid modules. LIFE is able to be launched on a variety of rockets, including SLS, a United Launch Alliance Atlas V 552 configuration, or a SpaceX Falcon Heavy. European launch provider Arianespace or Japan could also provide launch services for LIFE.

Inflation of the LIFE habitat is a several hour long process that results in three floors of living space. The central main floor serves as a laboratory, and the upper floor contains the crew’s quarters. The third floor is inverted from the other two, thanks to the weightlessness the crew would experience in space.

The LIFE habitat is based on NASA’s TransHab program of the 1990s which sought to develop inflatable space habitats. Sierra Nevada has been working closely with ILC Dover, the original contractor for TransHab, on the development of the LIFE habitat. LIFE is designed for a 15-year lifespan as a Lunar Gateway, with 10 to 60 day visits per crewed mission. The spacecraft could also serve a 1,100-day mission as a Mars transfer vehicle.

Bigelow ground units: too many and too large to move to a @NASA facility. pic.twitter.com/yY1SzQgZm0

TransHab also inspired another Gateway design: Bigelow Aerospace’s B330 spacecraft. The B330 is also an inflatable habitat, which has been informed by the success of their BEAM module on the International Space Station. Multiple full-scale prototypes are being tested by NASA at Bigelow’s facility in Las Vegas, Nevada.

The three other Gateway prototypes all also leverage experience from previously flown hardware. Lockheed Martin’s proposal is based on the Italian Multi-Purpose Logistics Module (MPLM) that was used to transport cargo to and from the ISS aboard the Space Shuttle. Northrop Grumman’s design leverages the Cygnus cargo spacecraft, which is human-rated and currently transports cargo to the Space Station under the Commercial Resupply Services program.

Boeing also has a Gateway concept named the Exploration Habitat Demonstrator, which leverages their experience as the prime contractor for the ISS. 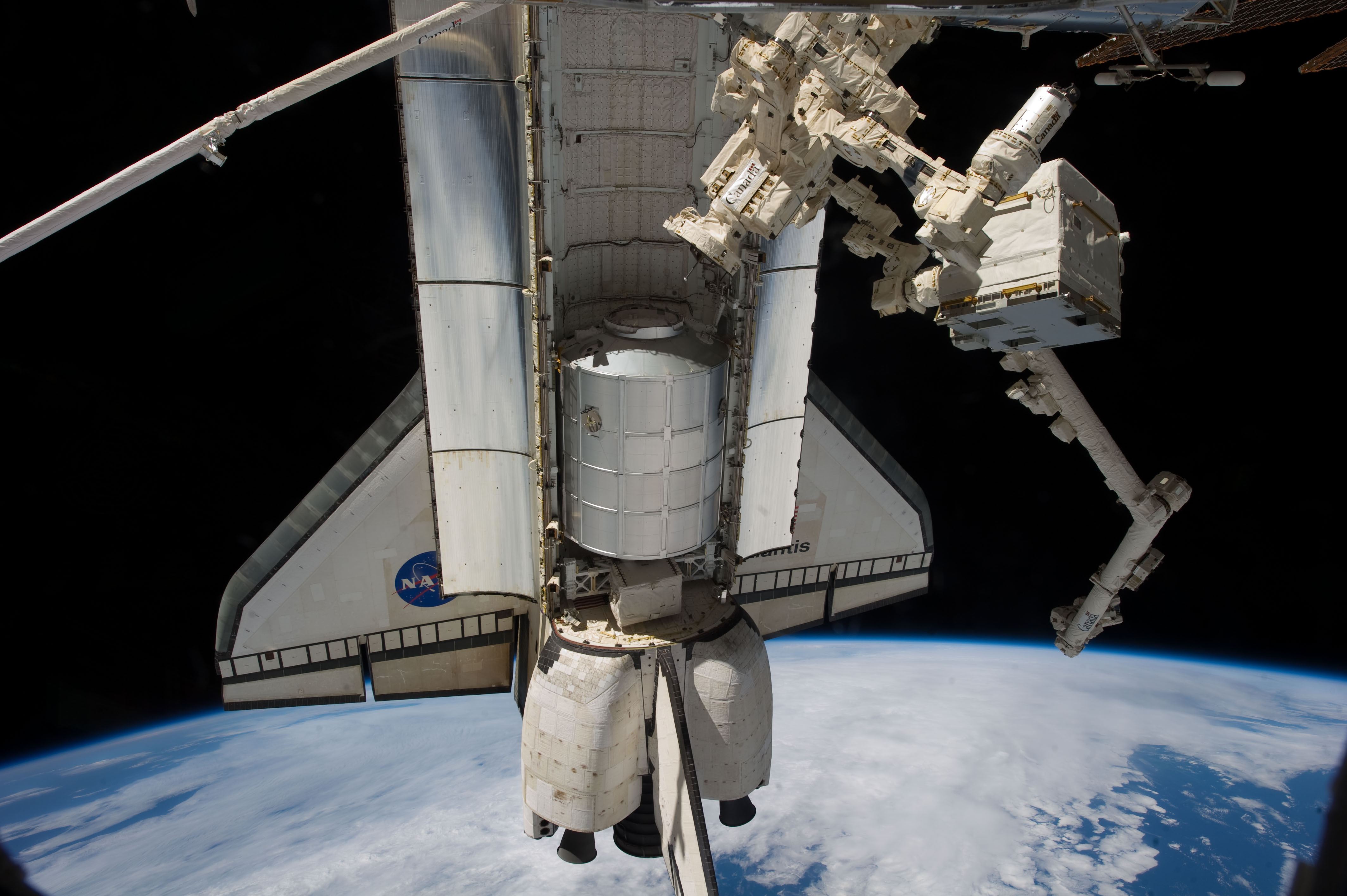 A sixth concept comes from NanoRacks, an active partner with NASA aboard the Space Station. They plan to repurpose spent rocket propellant tanks as their habitat, using the vacuum of space to vent residual propellants. The testing prototype for this design is still under development.

While NASA prepares to solicit competitive bids for the gateway, the competition to develop a lunar lander is already underway. Proposals for the Descent, Transfer, and Refueling elements of the Human Landing System were due in March. However, a second Request for Proposals is to be released later this month and could change the outlook of NASA’s mission architecture significantly.

Instead of having three separate elements to the lunar lander – a transfer stage, descent stage, and ascent stage – NASA is now soliciting proposals for integrated landers that could incorporate multiple elements combined into a single vehicle.

While the size and performance requirements of such a vehicle will not be available until the formal RFP is released, this could potentially open the door to existing single stage lander designs such as Lockheed Martin’s lunar lander or SpaceX’s Starship vehicle. This move was made in order to facilitate rapid development in pursuit of the Moon 2024 mission.

The refueling element of the HLS is still to remain separate from the lander. Proposals for the fifth element to the HLS, a spacesuit for extravehicular activates (EVAs) on the lunar surface, have not yet been solicited.

The Space Launch System rocket was originally intended to launch all components of a return to the moon. Delays and rising costs have resulted in new plans to launch the Gateway and HLS elements aboard commercial rockets, only launching the Orion crew vehicle aboard SLS. However, further delays have now called these launches into question as well, prompting a study by NASA’s Launch Services Program (LSP) on the feasibility of launching Exploration Mission 1 (EM-1) by the end of 2020 using commercial rockets.

Multiple factors, including the large mass of the Orion spacecraft, the lack of an existing lunar transfer vehicle, and performance issues ultimately ruled out the idea of moving EM-1 to a commercial launcher. Instead, NASA has looked for ways to accelerate the completion of the first SLS rocket, such as horizontally integrating portions of the core stage and canceling a pre-launch test called a “Green Run,” which would involve a full duration firing of the first stage at NASA’s Stennis Space Center in Mississippi. 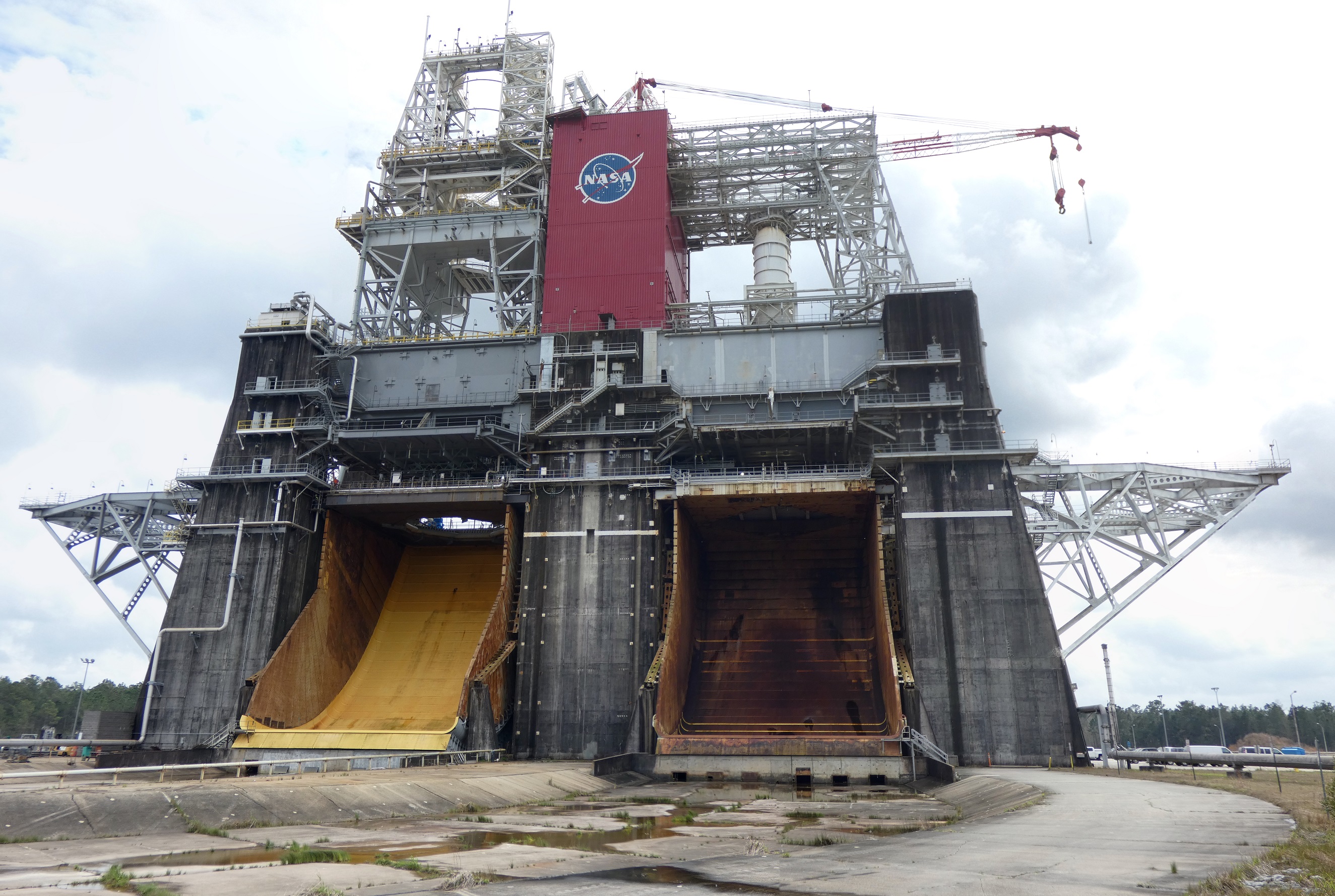 The B-2 test stand at NASA’s Stennis Space Center, where the SLS Green Run test will take place – via Philip Sloss for NSF/L2

In the wake of a catastrophic anomaly during static fire testing of SpaceX’s Crew Dragon spacecraft, NASA is likely not to skip the Green Run test, although that decision has not yet become official. Assuming it does, it would almost certainly mean no EM-1 launch until 2021.

Due to the limitations identified by the LSP study, this timeline is unable to be accelerated by launching aboard a rocket other than SLS. However, two potential alternatives could be used further down the road, should SLS continue to struggle to meet deadlines.

One option is to develop a transfer stage that could dock to Orion in Low Earth Orbit before continuing to the moon. The stage would likely be an adapted Interim Cryogenic Propulsion Stage (ICPS), the upper stage of SLS Block 1, which is based on the upper stage from United Launch Alliance’s Delta IV rockets. SpaceX’s Falcon upper stage was also considered but ruled out due to loads from the Merlin Vacuum engine.

Both Orion and ICPS would be launched separately aboard commercial rockets and autonomously docked in orbit.

L2 simulations showed that two recoverable Falcon Heavy launches could get Orion and ICPS to Low Earth Orbit to be docked. This also included the possibility of carrying Orion’s Launch Abort System (LAS) during the early phase of a crewed launch. 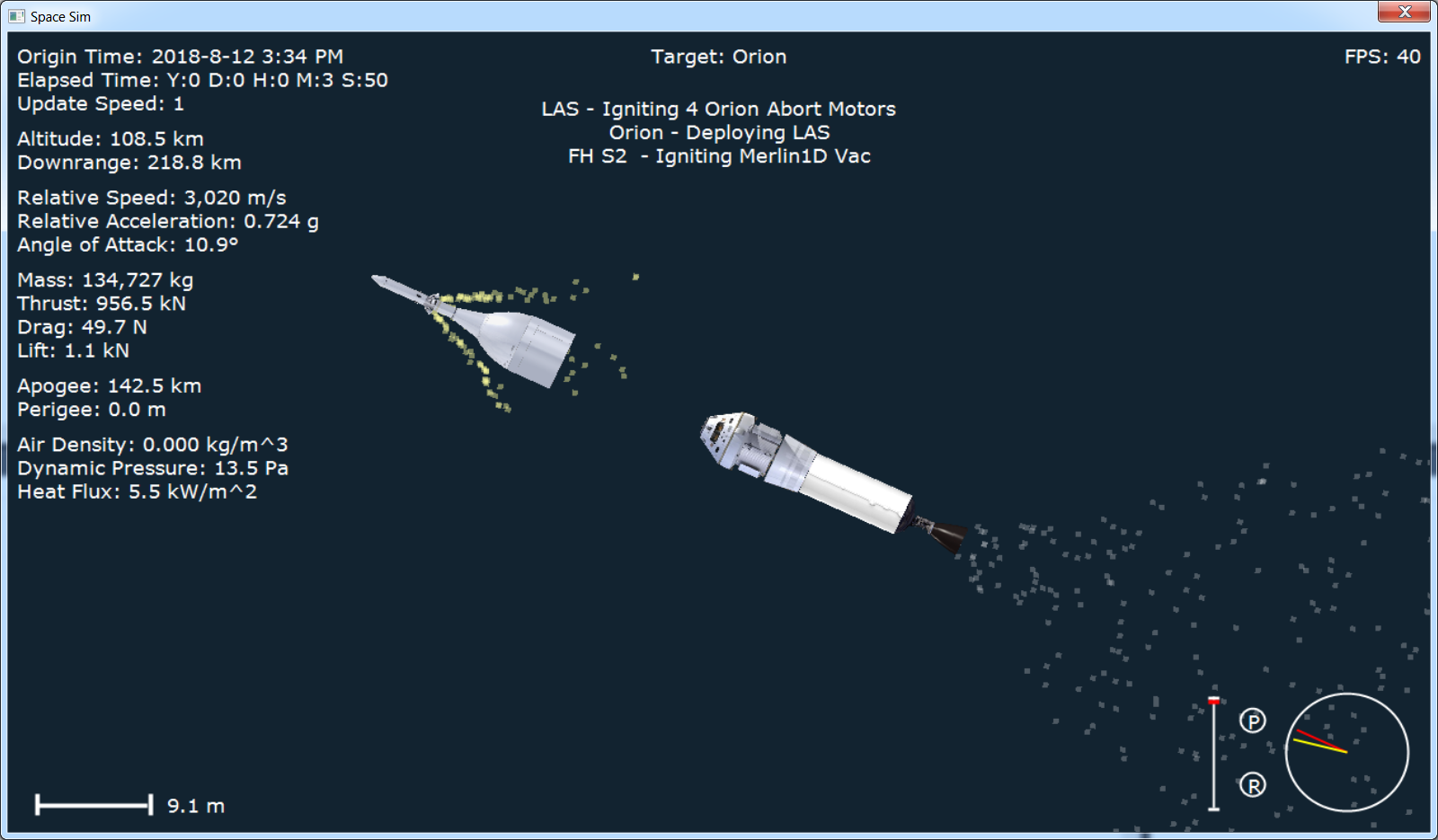 Launching these non-standard payloads would likely require customization to Falcon Heavy’s upper stage due to the different loads than a more typical satellite launch, as well as rating Falcon Heavy to carry crew.

NASA LSP also identified the need to accommodate Orion with additional ground support equipment on SpaceX’s Transporter/Erector, although this is considered a standard part of procuring launch services and wouldn’t be an issue. Orion would also have to be integrated with the launch vehicle horizontally, which would require additional work but likely not be a showstopper.

The other option is to launch both ICPS and Orion on a single launch. This would avoid the need to develop rendezvous and docking capability, as well as the need for a quick turnaround of Falcon Heavy’s launch pad. NASA LSP estimated that five years to plan the integration of Falcon Heavy, ICPS, Orion, and the LAS would be needed before such a vehicle could come to fruition. 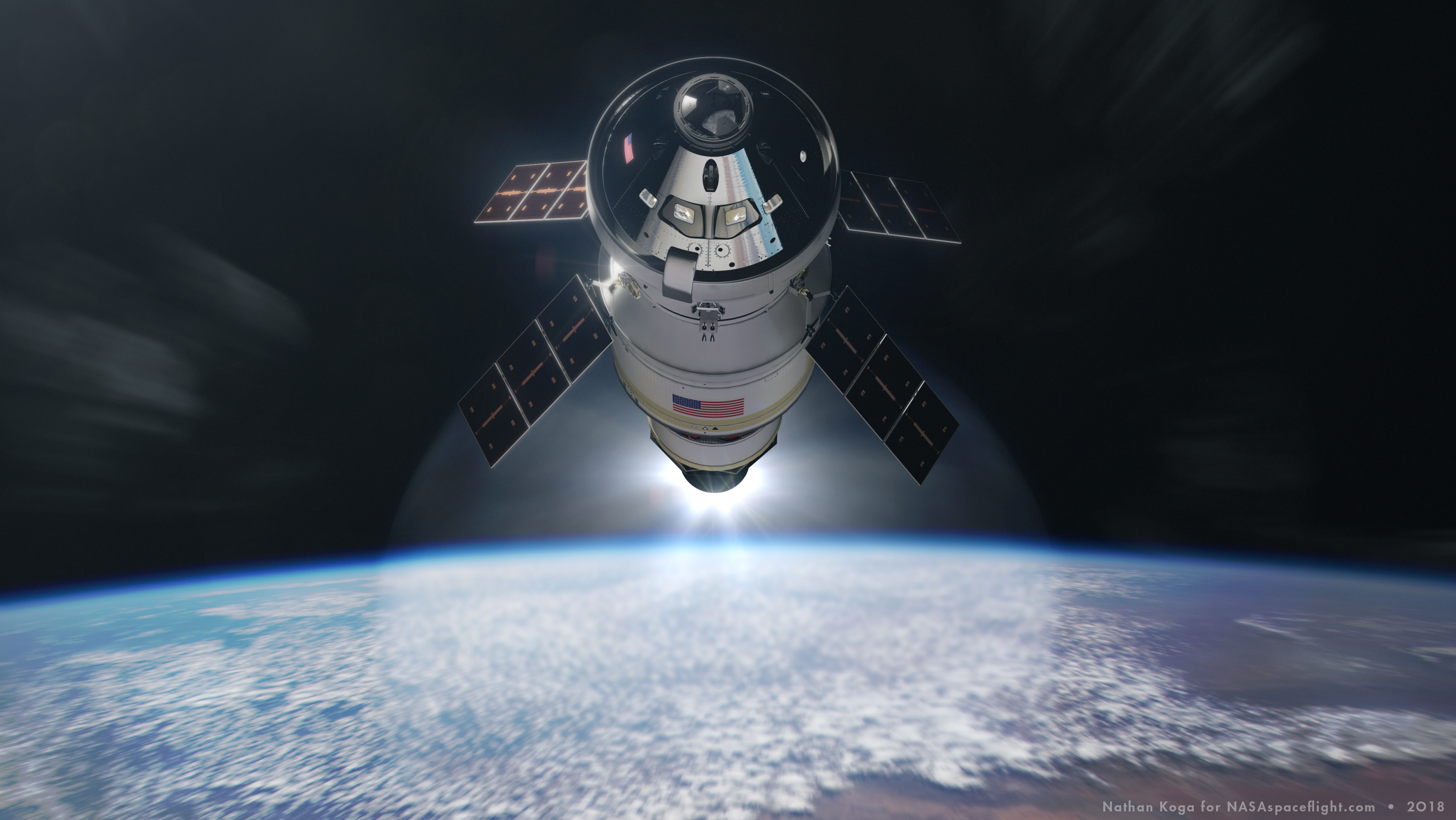 Falcon Heavy would fly in an expendable configuration, with no recovery hardware, to maximize performance. L2 simulations showed that ICPS could get Orion about halfway to the moon from Low Earth Orbit.

Using a short burn from Orion’s European Service Module (ESM) would complete the Trans-Lunar Injection (TLI). This would get Orion into the Lunar Gateway’s Near Rectilinear Halo Orbit (NRHO), which is effectively an elliptical, polar lunar orbit with a six-day period.

Orion could then rendezvous with the Gateway to allow the crew to perform their mission. Orion and the ESM would have enough fuel remaining to then return to Earth with performance margin to spare.

While these alternatives to SLS would take some time, they could factor into an accelerated return to the moon. After the Ascent Abort-2 test, currently targeted for July 2, Orion would complete its final uncrewed test flight on EM-1 to Lunar Orbit, aboard SLS.

EM-2 would see Orion and SLS launch crew for the first time in 2022. Then, with a minimal Lunar Gateway and an integrated lunar lander waiting in lunar orbit, EM-3 could launch on either SLS or a commercial launcher in 2024, returning humans to the surface of their natural satellite.

(NSF would like to give a special thanks to L2 member OneSpeed for producing the vehicle performance simulations used in this article.)

Virgin Galactic to move into Spaceport America for spaceport operations