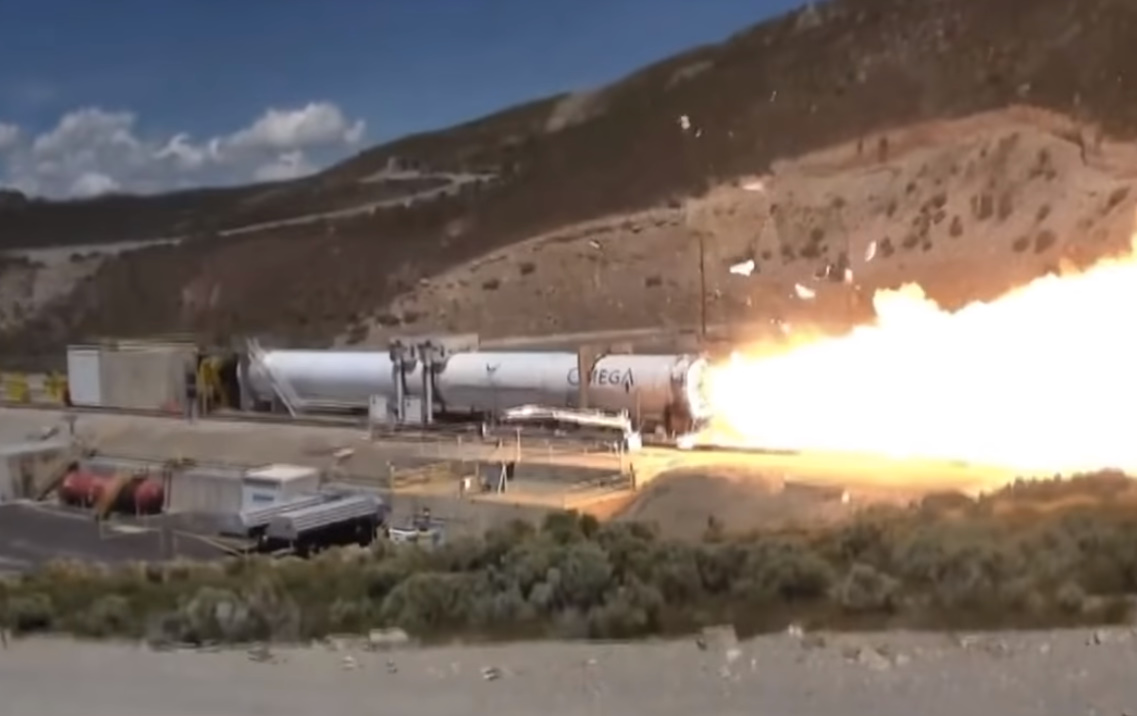 The Northrop Grumman Innovation Systems (formerly Orbital ATK) OmegA rocket conducted a key test today when its Castor 600 first stage fired for two minutes today at the NGIS test facility in Promontory, Utah, at the same test stand used by numerous Space Shuttle and SLS solid rocket motors during their test firings, although there was a situation with the nozzle that NGIS is looking at more closely.

After the end of the Ares 1 and Liberty launch vehicle projects, Orbital ATK developed a next generation launch vehicle concept to compete for future US Air Force and NASA launches, and won a rocket propulsion system (RPS) contract in January 2016 as part of the Air Force’s effort to end its dependence on Russian RD-180 engine imports, due to increased geopolitical tensions between the West and Russia.

The contract enabled Orbital ATK to keep working on the next generation launch system, which was later named OmegA, with the first and last letters capitalized to incorporate the company’s initials.

In June 2018 Orbital ATK was acquired by Northrop Grumman to become Northrop Grumman Innovation Systems (NGIS), and in October of that year the US Air Force awarded NGIS a launch service agreement (LSA) contract initially worth $181 million for the first 18 months, and ultimately worth $792 million, to develop, build, and test the OmegA rocket, culminating in four test flights of two configurations starting in 2021.

NGIS, United Launch Alliance, and Blue Origin were the three companies that won money for Phase 1 of the Air Force contract, with two contractors to be selected later for a five year block of operational missions for Phase 2.

In addition, the OmegA can have 1 to 6 smaller GEM-63XLT strap-on boosters mounted on the Castor 600 first stage and jettisoned in flight, to allow for heavier payloads to meet the full spectrum of national security launch needs. Finally, the OmegA features a 5 meter composite payload fairing with ESPA capable rings. 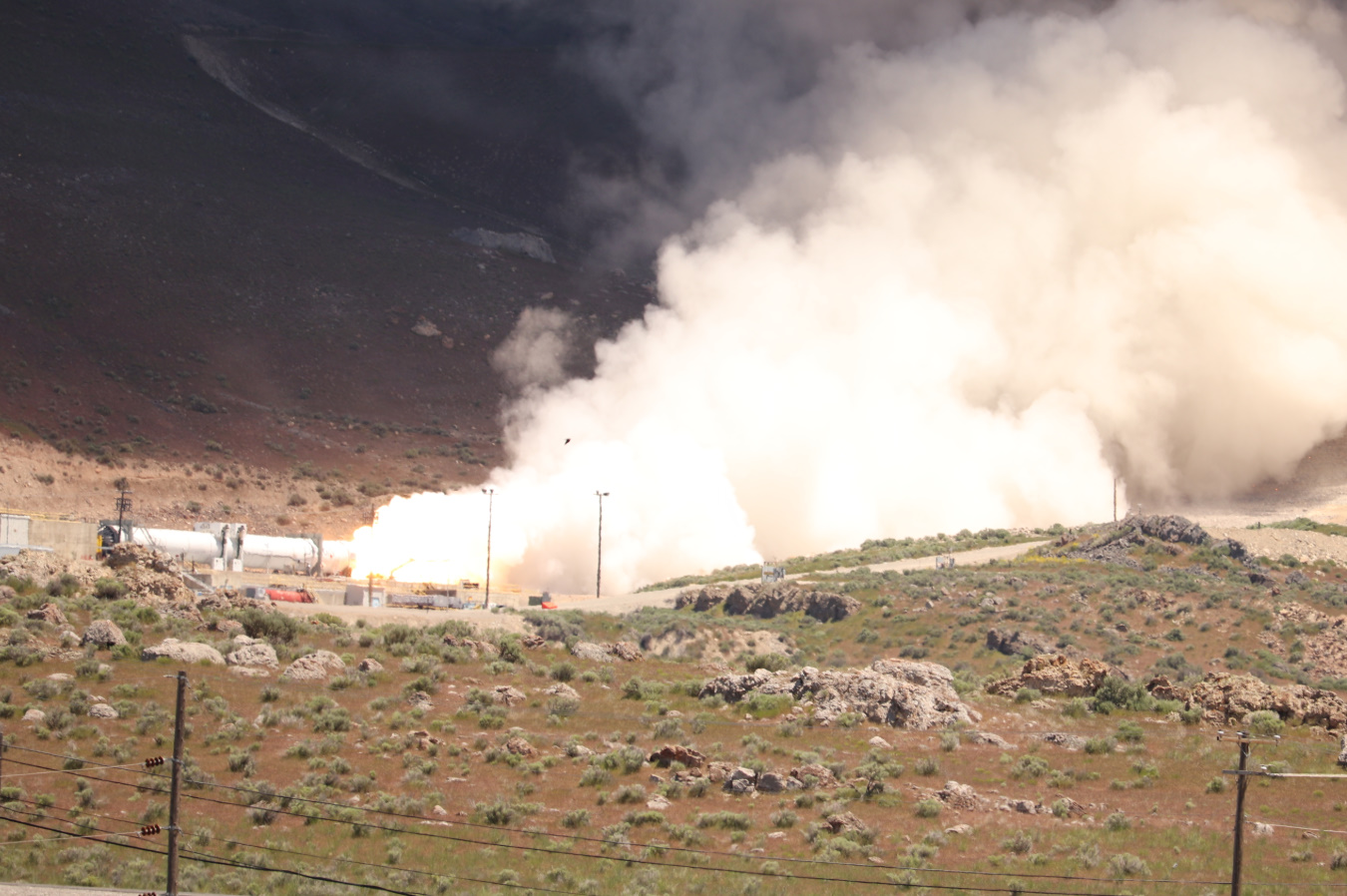 Launches will initially take place from the Kennedy Space Center Pad 39B, and High Bay 2 in the Vehicle Assembly Building (VAB) will be used to stack the OmegA for launch, on Mobile Launch Platform-3 (MLP-3) which was used for Space Shuttle flights and will be suitably modified for OmegA operations. 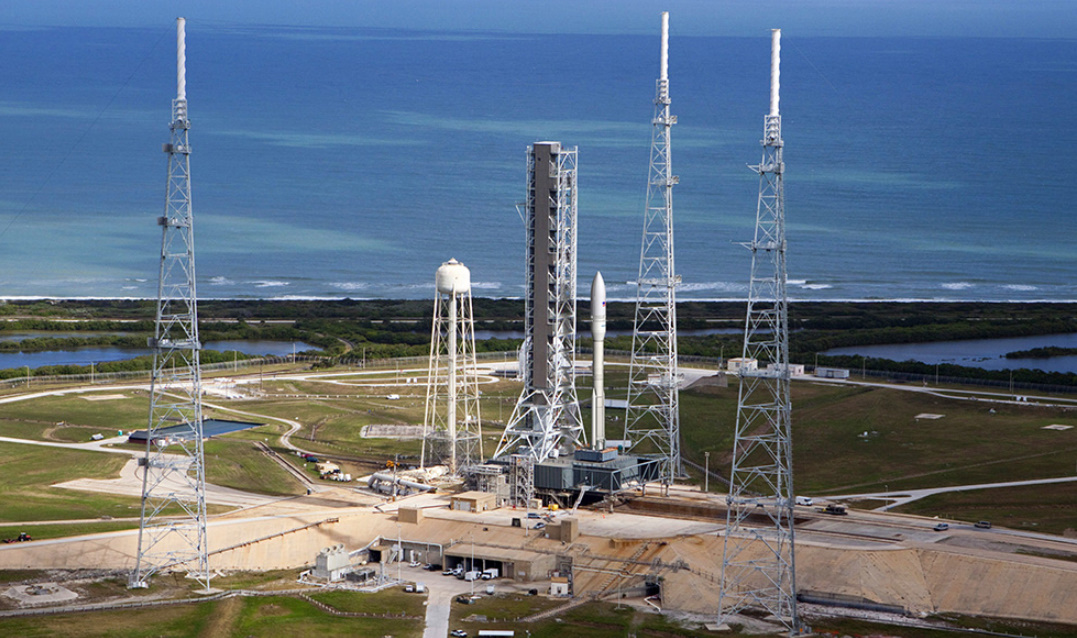 NGIS hopes to have Vandenberg Air Force Base SLC-6 available for OmegA polar orbit flights after 2023 when the Delta 4 Heavy is set to make its final flight.

A single OmegA CBS consists of a 12.2 foot diameter composite filament-wound casing and propellant, and is 12 feet longer than a Space Shuttle or SLS segment. The Castor 600 aft segment is the heaviest segment NGIS has ever developed in all its incarnations, with 33,000 gallons of propellant (the previous record was 27,000 gallons for an SLS segment), totaling 650,000 pounds of propellant. In addition NGIS made its largest ever single propellant casting during the assembly process.

Also though NGIS frequently discusses the proven flight heritage of the vehicle, the Omega nozzle, skirt, and segment are different from the Shuttle and SLS and the vehicle was developed from scratch in 4 years, with the first test being predicted for May 2019 when development started in earnest in 2015. The CBS segments, like the SLS and Space Shuttle segments, are all built at the ATK/NGIS facilities in Utah, using similar processes and equipment. 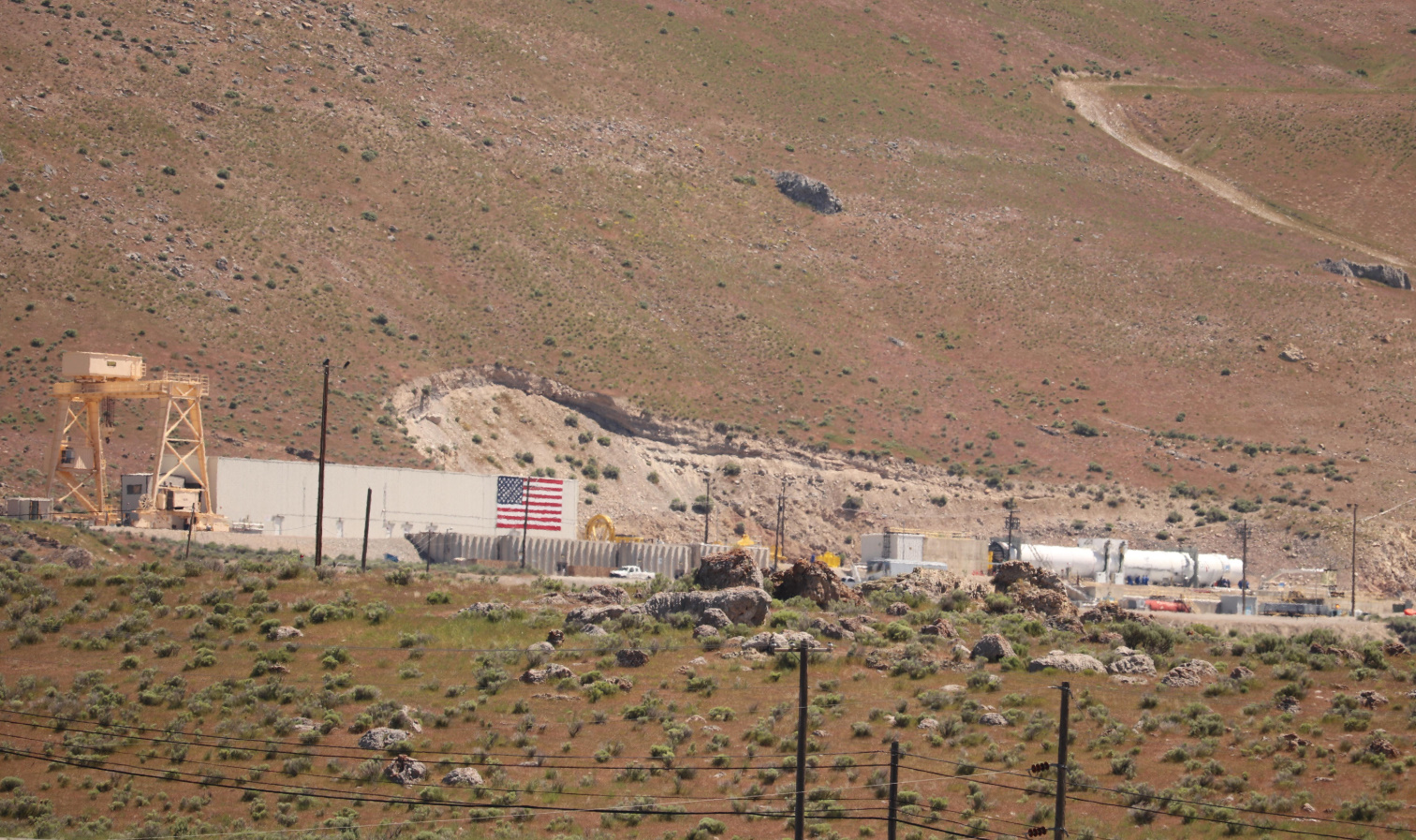 Prior to the test, the critical hardware was progressing to plan, and the project was meeting its schedules, which the NGIS management was very happy about. The OmegA CBS had passed its key tests during assembly and development, which included hydro burst testing using water to fill the composite case until it burst. The maximum expected pressure during flight was 1200 pounds and the casing burst well above that figure, which gave NGIS confidence about the OmegA segment integrity.

The part of the OmegA CBS tested today was the Castor 600 2 segment first stage, measuring 80 feet long, with mockup second and third stages attached, to make the assembly the same length as the actual vehicle. The Castor 600 tested today was heated to 90 degrees Fahrenheit and as a result the thrust was a little greater than the value expected at more normal temperatures.

The test countdown went smoothly, and the Castor 600 segment ignited on time at 1:05 pm Mountain with 2.2 million pounds of thrust. The ignition was very similar to previous shuttle/SLS SRB tests and the test burn looked very smooth and typical until two seconds before the Castor 600 finished burning, when nozzle pieces were seen flying away from the booster.

The burn quenching otherwise looked normal although there were reports of an issue on the test radio net and replays of the test clearly showed something happening in the area of the nozzle before booster shutdown.

The press conference held an hour after the test did not go into detail about what might have happened with the nozzle, and NGIS Vice President of Strategic Programs (and former Shuttle astronaut) Kent Rominger, although saying “generally very pleased” with the test advised that the quick look still had several hours to go and NGIS would look at the data extensively before any impact to the program going forward would be determined.

Successful test statement and what they saw with the nozzle. pic.twitter.com/jPaLloArUm

There were over 700 channels of data monitoring the test, which will no doubt be helpful to NGIS during the post-test data look, and the full look at the data would take 2 days, while disassembly of the test motor would take 2 months. As for whether the nozzle “observation” would have caused an issue during flight, it was pointed out that the thrust level could remain normal, but there was no detail given about what else could have happened in flight during that situation.

Future tests will be conducted on the Castor 300 (currently in the August-September timeframe) and GEM-63XLT (derived from the GEM-63 rocket tested earlier this year and last) before the OmegA’s 2021 first flight, with the OmegA being declared operational in 2022 and the heavy configuration following with two test flights starting in 2024.

Future flights of OmegA beyond the four test flights will depend on whether the rocket is selected for the USAF Phase 2 operational missions.