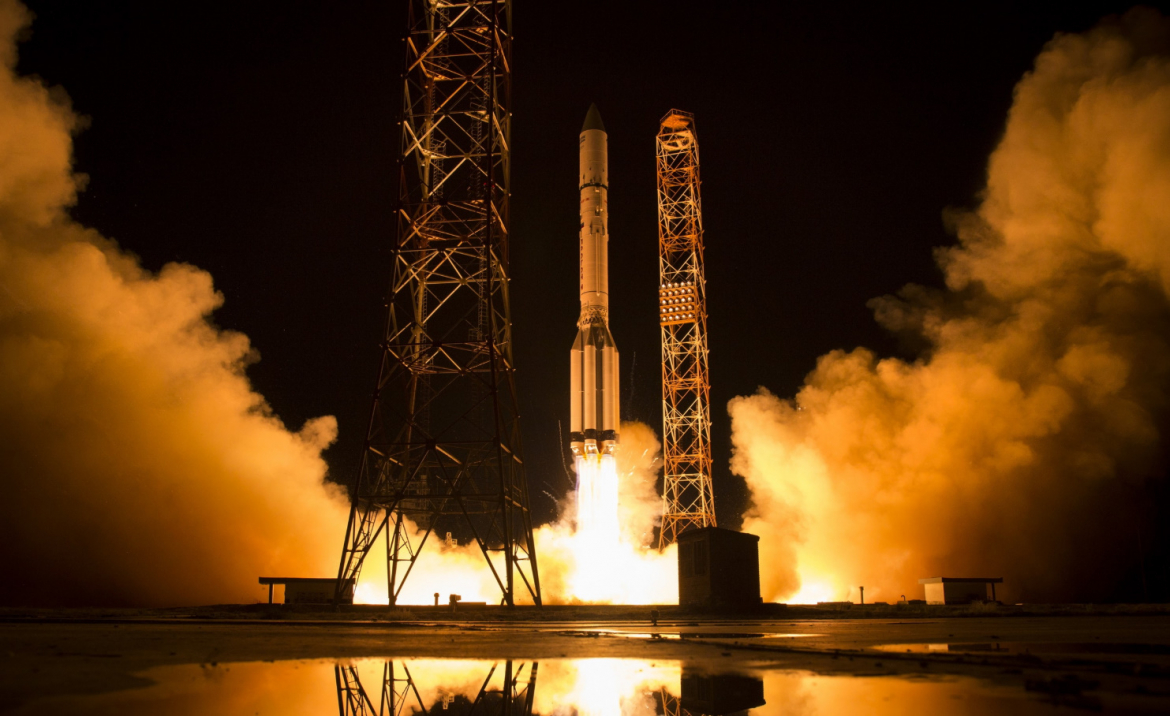 Yamal 601 is Russia’s most powerful telecommunications satellite. It will be operated by Gazprom Space Systems, a subsidiary of the Russian oil and gas conglomerate as part of its fleet of Yamal satellites. These spacecraft are used in part to support Gazprom’s own operations; however they are also heavily used for broadcasting. The Yamal 601 satellite falls under the Department of Television and Radio Broadcasting’s Federal Target Program.

Gazprom Space Systems was formed as Gazkom in 1992 to support Gazprom’s activities in the Northern regions of Russia. Its first two satellites – Yamal 101 and 102 – were deployed in a dual launch using a Proton-K/DM-2M rocket in September 1999, although Yamal 101 suffered an electrical failure shortly after launch.

To increase capacity, two additional satellites were carried to orbit by another dual launch in 2003. Yamal 201 was positioned at a longitude of 90 degrees East to augment and serve as a backup to Yamal 102, while Yamal 202 opened a new slot in the constellation at 49 degrees East. Yamal 201 ceased operations in 2014, however Yamal 202 remains in service and will be replaced by Yamal 601.

Three further satellites have since joined the constellation: Yamal 300K reached orbit in November 2012 and co-located with Yamal 201. The following month Yamal 402 was launched and, despite initially being deployed into a lower orbit than had been planned, this became operational at 55 degrees East. Yamal 401 was launched in December 2014, joining Yamal 300K at the 90-degree-East station.

Like the Yamal 202 satellite that it will replace, Yamal 601 carries eighteen C-band transponders, however it is also equipped with nineteen Ku-band and 26 Ka-band transponders, bringing new capabilities to the fleet including satellite broadband through the Ka-band payload. From its position at 49 degrees East the satellite will predominantly provide communications across Russia, as well as parts of Europe, southern Asia, North Africa and the Middle East.

OFF TO BAIKONUR: The Yamal-601 satellite will be launched on a #Proton Breeze M this year. The #satellite will be shipped to #Baikonur from the Thales Alenia Space factory in Cannes, France. Yamal-601 will replace the Yamal-202 satellite. pic.twitter.com/bJuZ6MwLbz

The Yamal 601 spacecraft was built by Thales Alenia Space and is based on the company’s Spacebus-4000C4 platform. With a mass at launch that was previously reported to be about 5,700 kilograms (12,600 pounds), the spacecraft is expected to serve Gazprom for the next fifteen years.

Like all of the Yamal satellites before it, Yamal 601 will ride to orbit atop a Proton rocket manufactured by the Khrunichev State Research and Production Space Centre. Proton was developed in the 1960s as a derivative of Vladimir Chelomei’s UR-500, a proposed ultra-heavy missile that would be able to carry the Soviet Union’s most powerful nuclear weapons anywhere on the planet. 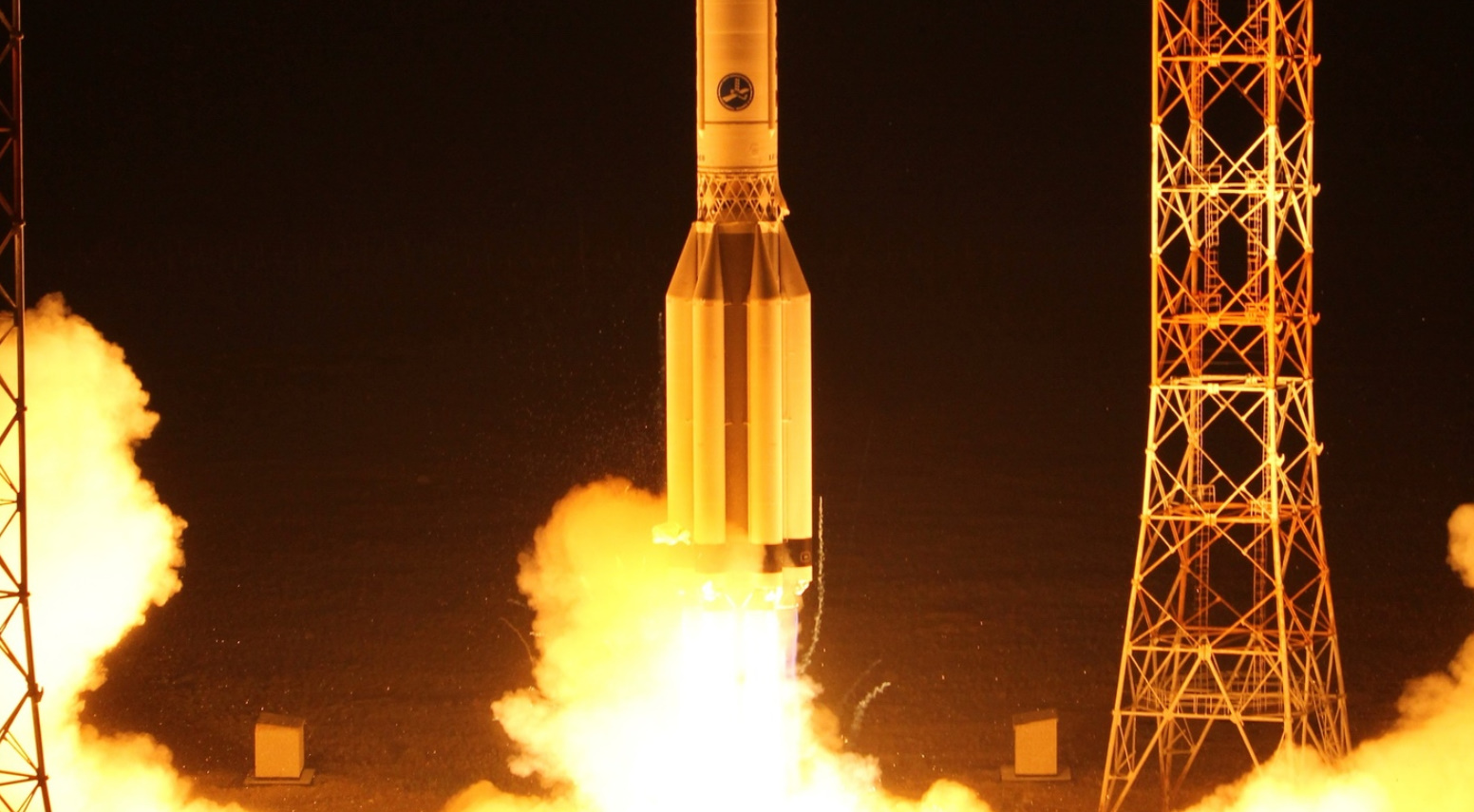 Although the UR-500 was never deployed its potential to launch satellites was recognized and with the addition of a new third stage it became the Proton-K. This could fly either in its three-stage configuration to place heavy payloads such Space Stations into low Earth orbit, or with an additional fourth stage to facilitate missions to much higher orbits.

The Proton-M that performed Thursday’s launch is a modernized version of the Proton-K that was introduced in 2001. Since its debut a series of upgrades, including weight saving measures and enhanced engines have been made to the rocket. The versions of Proton currently flying are the Proton-M Phase III and Phase IV. 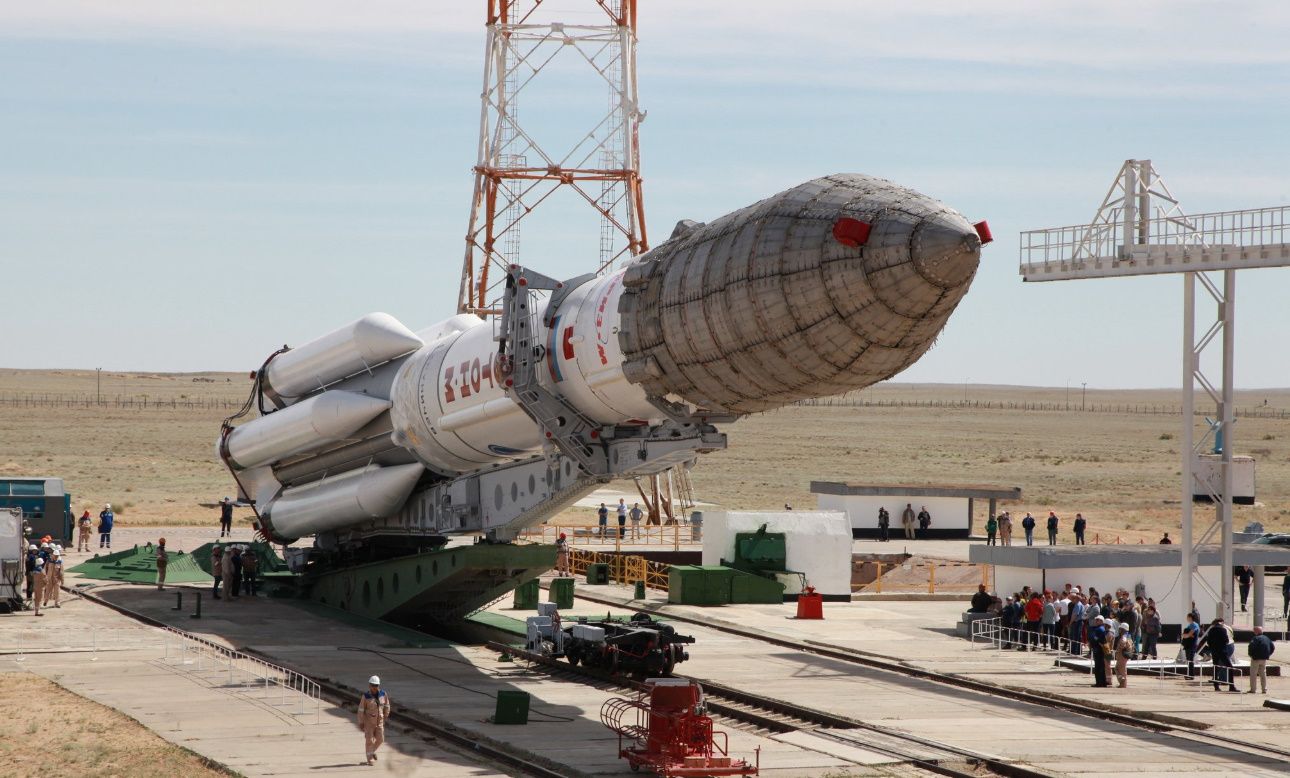 Proton M ahead of launch – via ILS

In recent years Proton has suffered from poor reliability, with a string of failures and quality control concerns between 2006 and 2015 damaging its reputation. This, combined with the breakthrough of new launch providers such as American SpaceX, has led to fewer commercial launch contracts for Proton and a much reduced launch rate. Proton will be replaced by Russia’s new Angara rocket, and it expected to be phased out over the next decade.

Over 400 Proton vehicles have been launched, including over 100 Proton-M rockets. The rocket that will fly Thursday has the serial number 63901. Launch took place from Site 200/39 at the Baikonur Cosmodrome in Kazakhstan.

The three-stage Proton-M was paired with a Briz-M upper stage for Thursday’s mission. The restartable, storable-propellant Briz-M is regularly used with Proton to carry commercial and Russian Government payloads into higher orbits – typically geostationary trajectories.

Thursday’s launch began with ignition of the six RD-276 engines powering Proton’s first stage. All four stages of the rocket, including the Briz-M, burn hypergolic propellant: unsymmetrical dimethylhydrazine oxidized by dinitrogen tetroxide. The first stage has an unconventional design with six radial fuel tanks clustered around a central oxidizer tank. This was driven by a need to transport the rocket by rail, with the radial tanks being fitted once Proton has reached the launch site.

The first stage powered Proton’s ascent for 119.7 seconds. Shortly before it cut out, Proton’s second stage ignited before separating from the first. This “fire in the hole” stage separation technique keeps propellant settled in the second stage tanks and removes the need for ullage motors.

The second stage has four engines: three RD-0210s and an RD-0211. These are identical except that the RD-0211 can be used to pressurize the stage’s propellant tanks. Proton’s four second stage engines burned for 207.5 seconds. At the end of this burn the second stage separated and the third will ignited.

A really impressive CGI overview of the Proton-M from Roscosmos: pic.twitter.com/IbpxTw9AtX

Proton’s third stage is powered by an RD-0212 engine assembly – consisting of an RD-0213 main engine and a four-chamber RD-0214 vernier engine for attitude control. It fired for four and a quarter minutes, placing Briz-M and Yamal 601 onto a suborbital trajectory. During third stage flight, about 19.7 seconds after ignition, Proton’s payload fairing separated from the nose of the vehicle.

Russia’s high latitude makes it difficult to launch into a geostationary orbit, which requires a satellite to circle the Earth about its equator. Even when launching from Kazakhstan, Briz-M has to perform a complex series of maneuvers to reduce its orbit’s inclination and minimize the amount of fuel that Yamal 601 will have to expend to enter its final orbit.

Briz-M ignited to begin its first burn 94 seconds after the third stage cuts off. This placed Yamal 601 into an initial low Earth orbit. Over the next nine hours another two to four burns were made, raising the orbit’s apogee to 35,703 kilometers (22,185 miles, 19,278 nautical miles), increasing its perigee and reducing inclination. 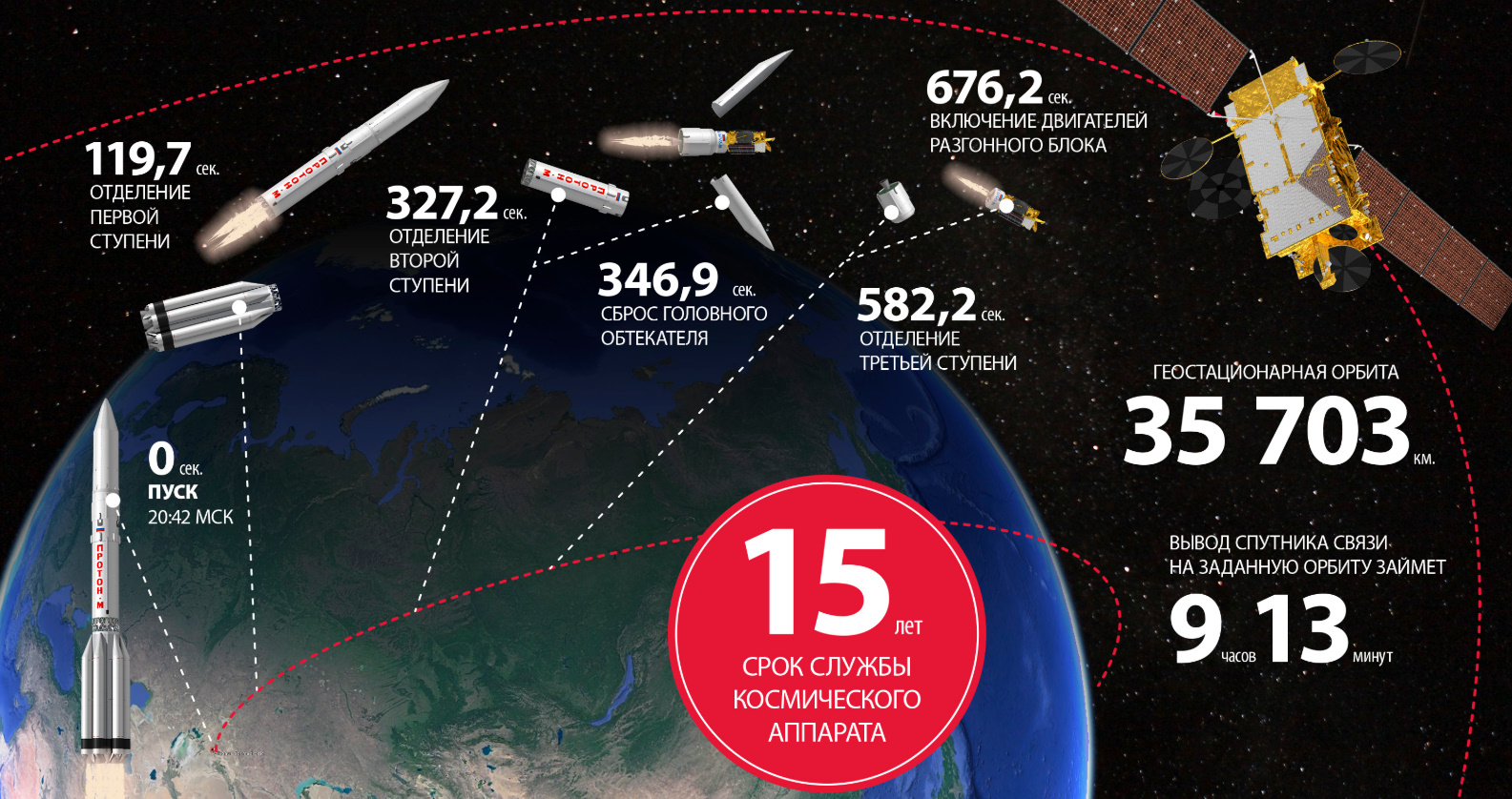 The Briz-M incorporates a toroidal external propellant tank mounted to the outside of its propulsion module. Its propellant was expended before that in the core section and once the supply was depleted the propellant tank was jettisoned between burns.

Depending on the mass of its payload, Briz-M can either inject a satellite directly into geostationary orbit or place it into an optimized geostationary transfer orbit from which the satellite can complete insertion under its own power. If as previously reported Yamal 601’s mass is 5,700 kilograms (12,600 pounds), the satellite can be expected to enter a transfer orbit. Roscosmos declared the launch a success following separation.

Thursday’s launch was the first for Russia’s Proton since December. The next Proton launch is currently expected on 21 June, when the rocket will carry the Spektr-RG x-ray astronomy satellite to orbit with the aid of a Blok DM-03 upper stage. A commercial Proton-M/Briz-M launch is also slated for late June or Early July with the Eutelsat 5 West B spacecraft and MEV-1, an experimental satellite servicing and life-extension mission.