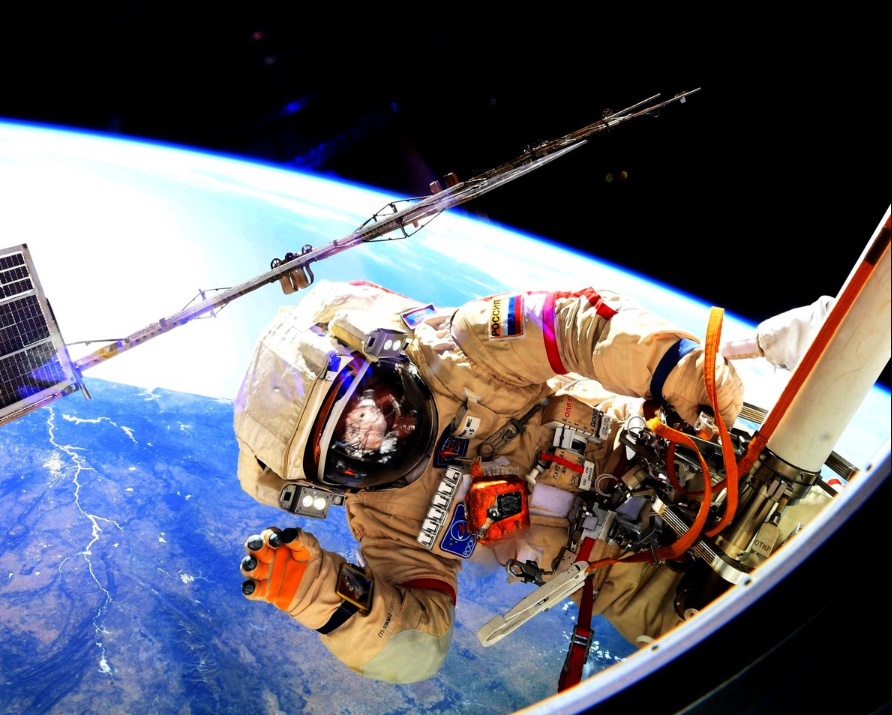 Oleg Kononenko and Alexey Ovchinin have completed their spacewalk, titled VKD-46 on Wednesday. The duo installed handrails on the Russian segment, retrieved science experiments from the Poisk module and conduct maintenance work – including the jettison of four payloads. They opened the EVA with a tribute to the first man to walk in space, Alexei Leonov, who celebrates his 85th birthday on Thursday.

As per usual, Russian spacewalks are often less to do with crucial repairs to the orbital outpost and more related to minor housekeeping and experiment retrievals – along with the trademark of a Russian EVA with the “throwing overboard” – or jettisoning – old hardware and towels.

Expedition 59 Commander Kononenko and Flight Engineer Ovchinin opened the hatch to the Pirs docking compartment airlock and conducted initial safety checks and the preparation of foot restraints before – after around 30 minutes of trying to get into position – filming a special message for Leonov.

After about 30 minutes trying to get into position for this, Oleg Kononenko and Alexey Ovchinin send a birthday message to Alexei Leonov – the first man to walk in space. Leonov is 85 years old on Thursday. pic.twitter.com/OdA5Aj98ll

On 18 March 1965, Leonov became the first human to conduct extravehicular activity, exiting the capsule during the Voskhod 2 mission for a 12-minute spacewalk. It nearly ended in disaster as pressure built in his suit.

Thankfully, he managed to open a valve to allow some of the suit’s pressure to bleed off, which was enough to allow him to ingress his spacecraft.

Once the message was filmed, Kononenko, designated EVA crew member 1 (EV1) and conducting his fifth spacewalk, joined by Ovchinin, who was EV2 and on his debut EVA, installed handrails on the Russian segment of the complex.

They then retrieved science experiments from the Poisk module’s hull, and conducted various maintenance work, including some window cleaning on the secondary airlock on the Russian section and moving an experiment that checks on plume impingement from arriving and departing spacecraft.

The latter is likely the reason for the airlock window requires occasional cleaning.

The spacewalk was the 217th in support of station assembly, maintenance and upgrades and the fourth outside the station this year. It included four payloads being “thrown” off the ISS to eventually burn up during re-entry.

Kononenko is scheduled to return to Earth June 24, with crewmates Anne McClain of NASA and David Saint-Jacques of the Canadian Space Agency, wrapping up a six-and-a-half-month mission living and working in space. Ovchinin will take over as ISS commander during their departure from the ISS. 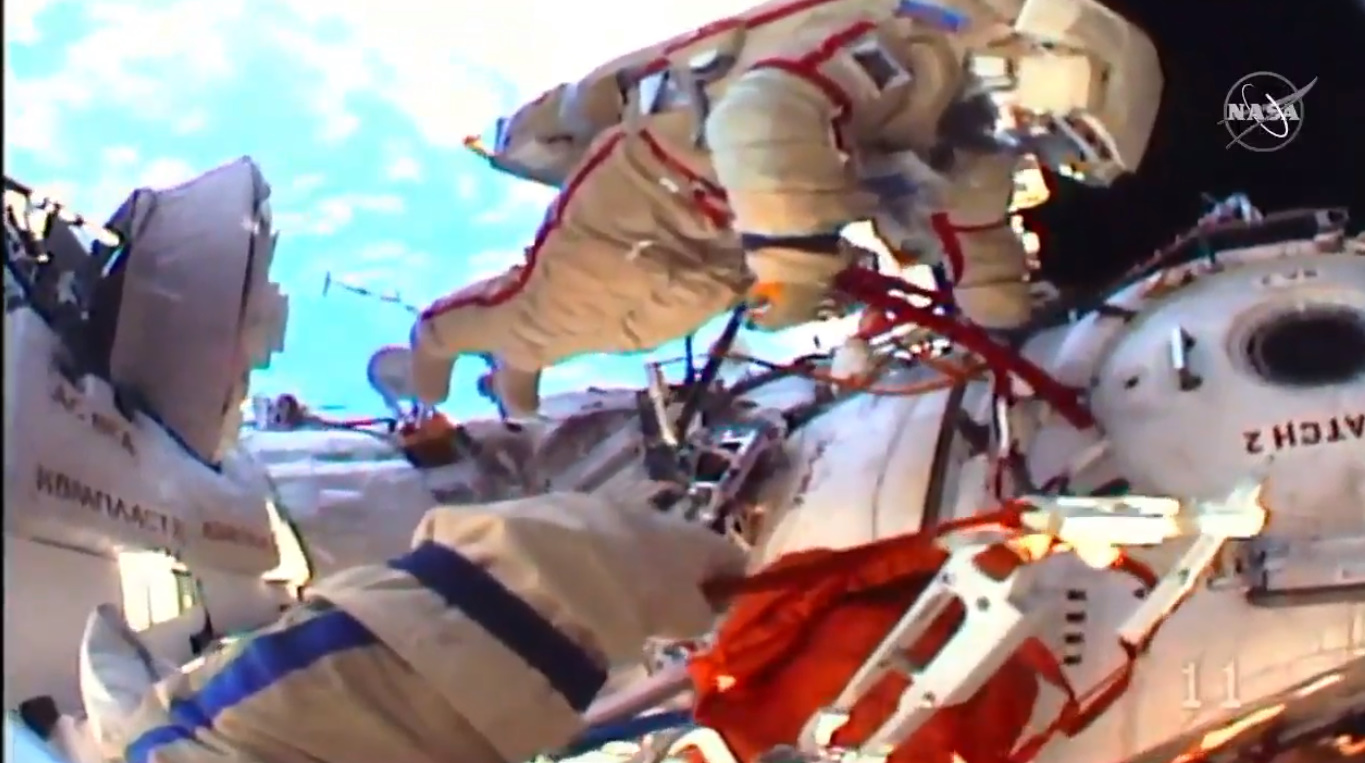 Another departure is coming up before the crew heads back to Earth, with the CRS-17 Dragon now in preparations for its own return, currently scheduled for June 3.

The Dragon has now been grappled by the Space Station Remote Manipulator System (SSRMS) ahead of the process that involves the release of two sets of bolts and latches that will allow the robotic arm to carefully move the spacecraft into the release position. 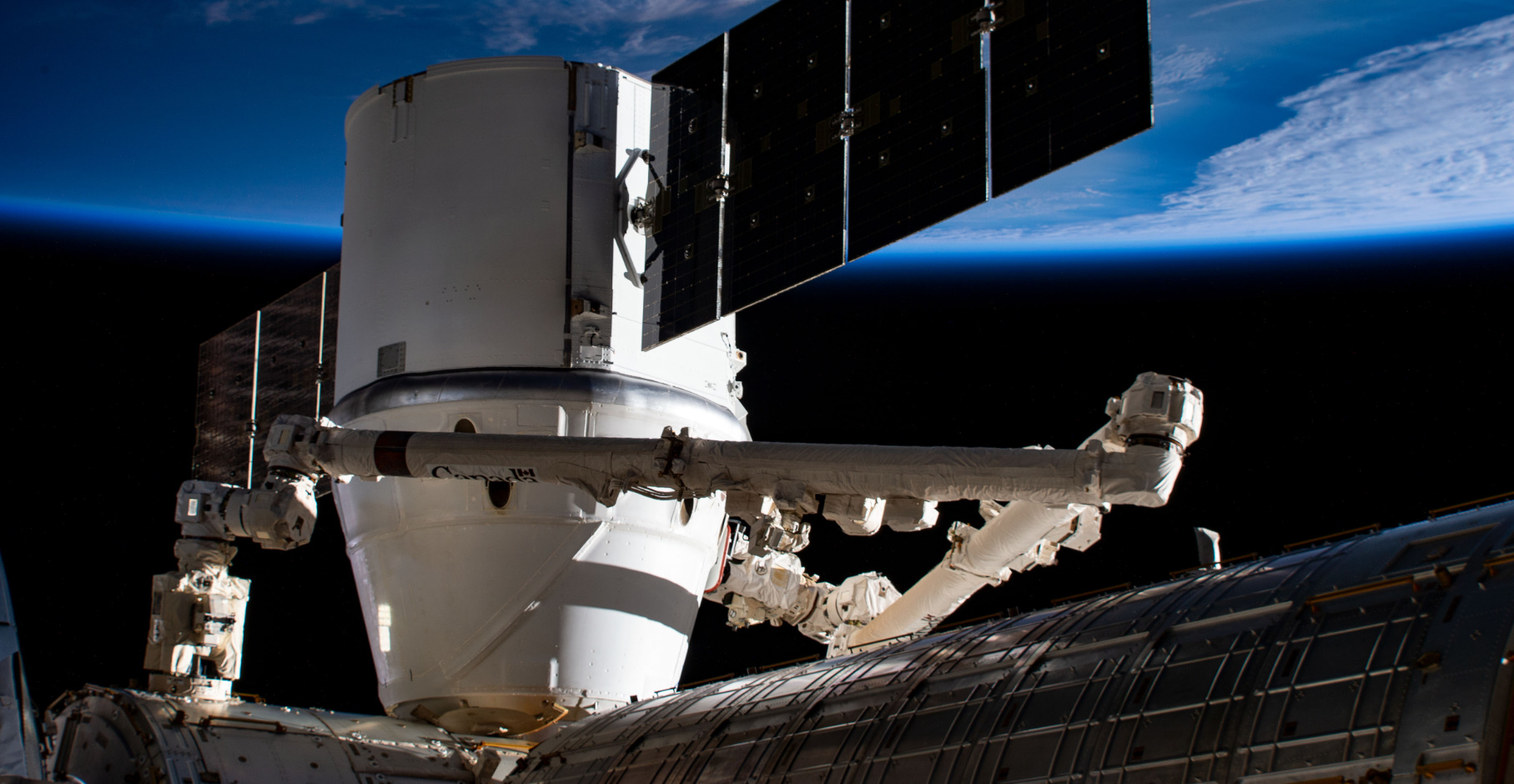 “SpaceX-17 Unberthing Preparations – The Mobile Transporter (MT) translated from Worksite 7 to Worksite 6, and the SSRMS walked off from the MT to Node 2, to prepare for SpaceX-17 unberthing and release,” noted L2 ISS information.

“The MT translated from Worksite 6 to Worksite 3 in order to configure for unberthing.  The SSRMS will grapple the SpaceX17 Dragon spacecraft (since completed).”

Dragon will splashdown in the Pacific Ocean ahead of being transported to port where critical downmass payloads will be removed and sent to NASA.