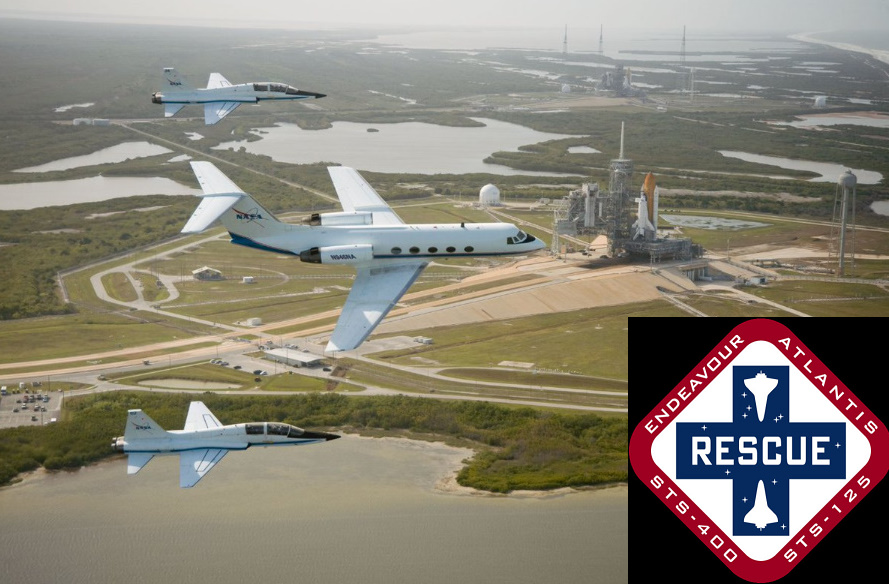 Ten years ago, the crew of Shuttle Atlantis was in the final phase of their Servicing Mission to the Hubble Space Telescope. STS-125 was proceeding to plan and their vehicle was deemed to be in excellent condition for the return trip. However, had Atlantis suffered major damage during her launch to the telescope, Endeavour was sat on Pad 39B, ready to launch at short notice on an ambitious rescue mission. This rescue mission was called STS-400.

When the Space Shuttle fleet returned to action after the loss of Columbia, major alternations were made both to the vehicle and to the procedures – all aimed at mitigating the threats of damage to the Thermal Protection System (TPS) on the orbiter.

While engineers successfully reduced most of the foam liberations from the External Tank – the cause of the damage that mortally wounded Columbia – it was decided that an additional back-up option would become the norm – using the International Space Station (ISS) as a “Safe Haven” if inspections shown major damage to the heat shield of the orbiter.

That was the pattern for all RTF (Return To Flight) missions, with on-orbit inspections of Flight Day 2 involving the Orbiter Boom Sensor System (OBSS) checking over every inch of the orbiter TPS to send huge amounts of photo and video to the Damage Assessment Team (DAT) on the ground. 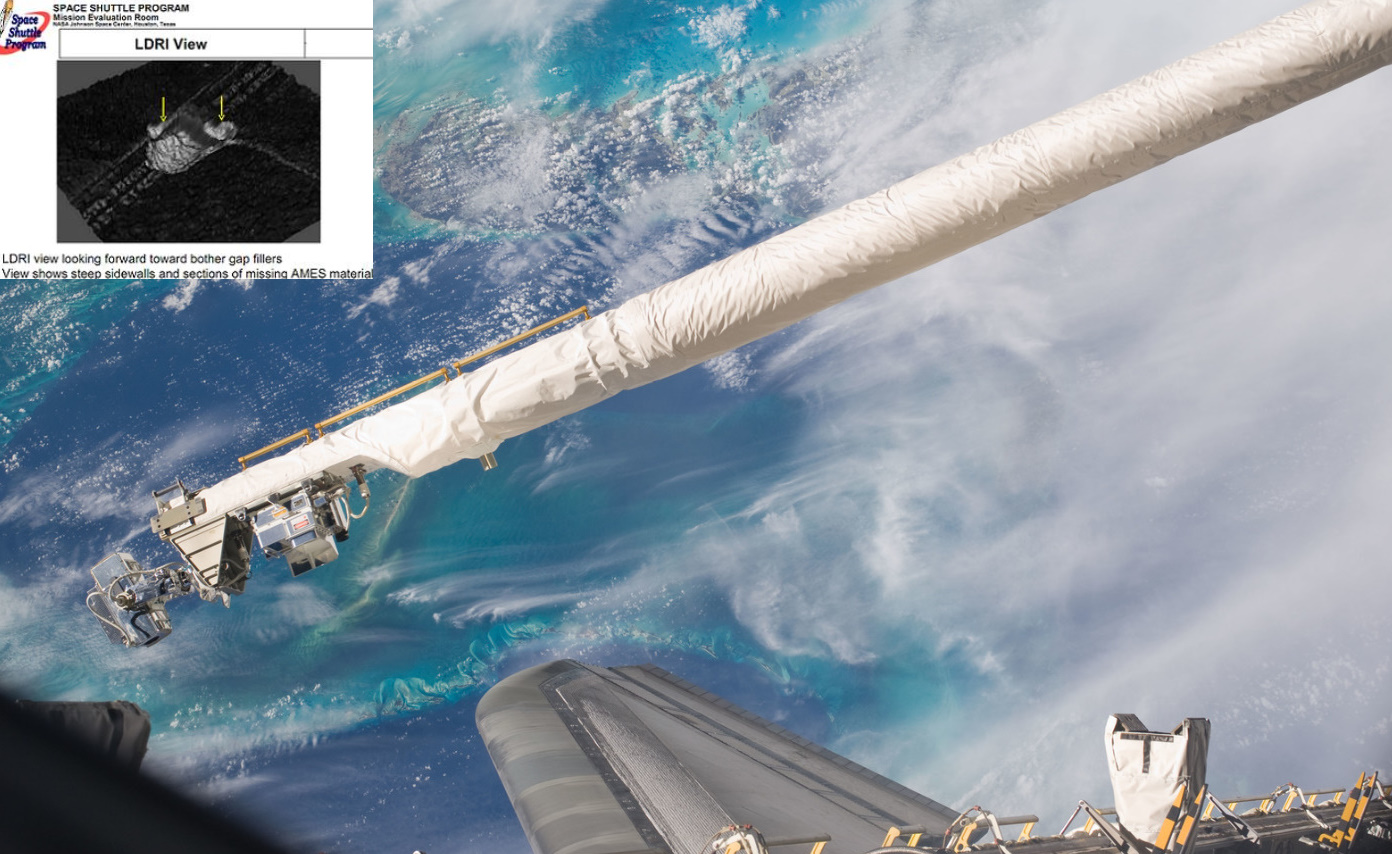 The OBSS and a slide of detailed chip damage – via L2

All the OBSS imagery from its suite of sensors would then be followed up by the stunning RPM (R-bar Pitch Maneuver, popularly called the Rendezvous Pitch Maneuver) that put the orbiter into a black flip under the Station while ISS crewmembers took high-quality photos of the TPS.

This maneuver was also a new inclusion for Return To Flight and also required the mission to be to the ISS.

The orbiter would then dock with the ISS and, providing the DAT cleared the orbiter from any damage concerns, one final inspection would take place shortly after undocking in order to provide the final green light to return home.

At any point during the mission timeline, the observation of major damage would have resulted in a call to evaluate repairs or opt to use the ISS as “Safe Haven” – an option still available to the crew even after undocking, per a contingency return to the ISS if issues had been found during “Final Inspections” with the OBSS.

Shuttle managers always had this option during ISS missions, with the next orbiter set to launch placed into a point of her processing flow that would allow a change of call signs.

Had the call to take up “Safe Haven” been made, the next orbiter would move to her “LON” (Launch On Need) call sign, assigned as Contingency Shuttle Crew Support (CSCS) on the manifests, abandoning its primary mission flow and moving to the pad as a rescue vehicle, launching with a subset of four from her assigned crew.

For example,  Atlantis STS-122 mission had Endeavour on LON standby as STS-323. Once Atlantis was cleared for return, Endeavour reverted back to her primary STS-123 mission flow. 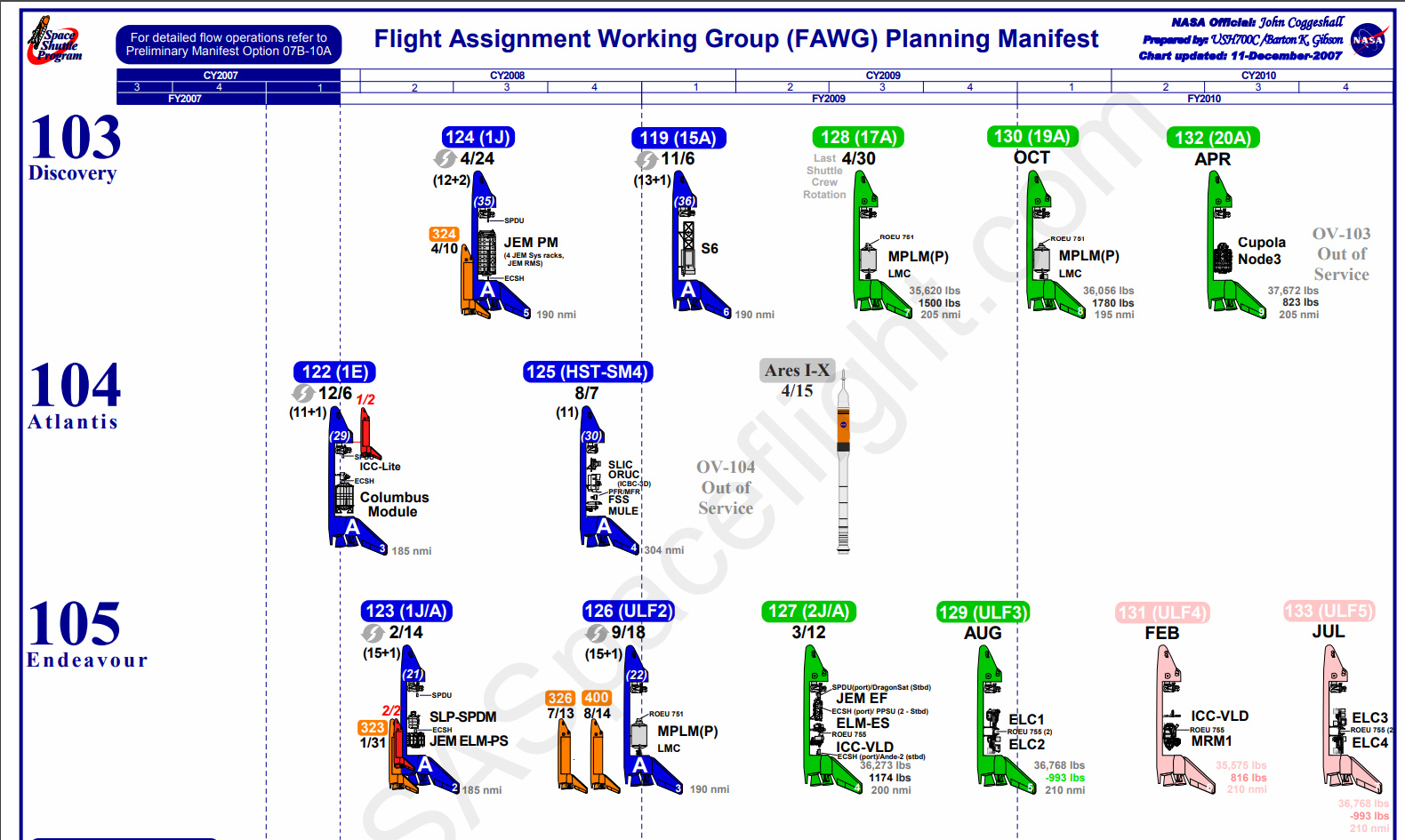 The Shuttle (FAWG) Manifest ahead of STS-125 – via L2 (Note, the plans changed for the latter flights

Incidentally, the fate of the damaged orbiter during such a contingency was mostly based on programming that would have ordered the orbiter to undock and conduct a destructive, tail first, re-entry over the Pacific Ocean.

However, there were options to allow the orbiter to make an uncrewed landing via a box of tricks to carry out some of the crew inputs, such as lowering the landing gear. It was always unlikely to be used during a Safe Haven/LON event, given the concerns a damaged orbiter would not survive re-entry.

The Autonomous Orbiter Rapid Prototype (AORP) was a modification that matured to full RCO (Remote Control Orbiter) – which allowed the orbiter to complete the final landing procedures that required human intervention. It would have required crewmembers on the ISS to install a box into the flight deck over certain “human intervention” switches.

All of the remaining Shuttle missions were dedicated to finishing the assembly of the ISS, allowing this key back up of “Safe Haven” to be implemented through to the end of the program. There was a plan to return to Hubble one final time, but this mission was canceled by then-NASA Administrator Sean O’Keefe due to the fallout from the Columbia disaster.

However, with Hubble in desperate need of upgrades and repairs, pressure from the science community and then lawmakers – notably Senator Barbara Mikulski – successfully gained support from O’Keefe’s replacement, Mike Griffin, who reinstated the mission.

That led to a major review within NASA, given this mission would not have the support of “Safe Haven” and actually included additional risks for the orbiter, which would have to push its propellant reserves to reach the higher orbit of Hubble and also increase the risk of being hit by MMOD (Micro-Meteoroid Orbiting Debris).

The solution – after much deliberation – was to have another Shuttle on the adjacent pad and ready to launch at short notice to rush to the aid of Atlantis’ crew.

As the Shuttle manifest started to align, Atlantis was awarded STS-125’s servicing mission to Hubble and Endeavour was next in line to launch and thus gained the STS-400 rescue mission supporting role. 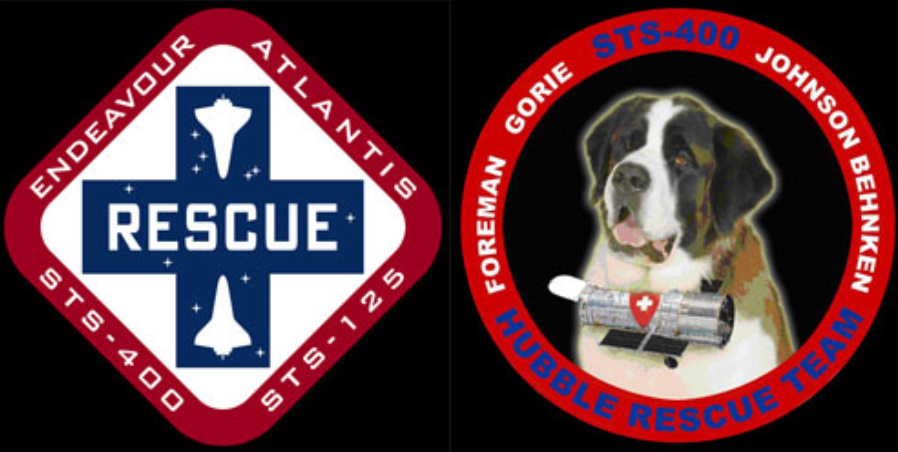 Normally, with “Safe Haven” in play, the crew of the damaged orbiter could reside in the ISS for several months until the next Shuttle could be launched to return to them to Earth. However, with no”Safe Haven”, Atlantis would go through two stages of power down procedures to stretch consumables to around four weeks in “lifeboat” mode.

If un-repairable damage is detected during the FD-2 TPS inspections, and the decision made to conduct an immediate Group C+ power-down, Atlantis could act as a life raft for her Flight Crew for just over 24 days if needed.

Similarly, should un-repairable damage be detected on FD-10 during the late inspections, and the decision made to move immediately into Group C+ power-down, Atlantis could act as a life raft for an additional 16.5 days, with the STS-400 rescue mission arriving No Earlier Than 15 days 16 hours after the damage was detected.

While a ‘P-t-P’ (Pad to Pad) option was available, the turnaround was classed as “too tight to be viable”, leading to NASA opting to hold back the full handover date of Pad 39B to the Constellation Program in preparation for the Ares I-X test launch until after the stand-down was given during STS-125. This resulted in Endeavour being the last Shuttle to reside on Pad 39B. 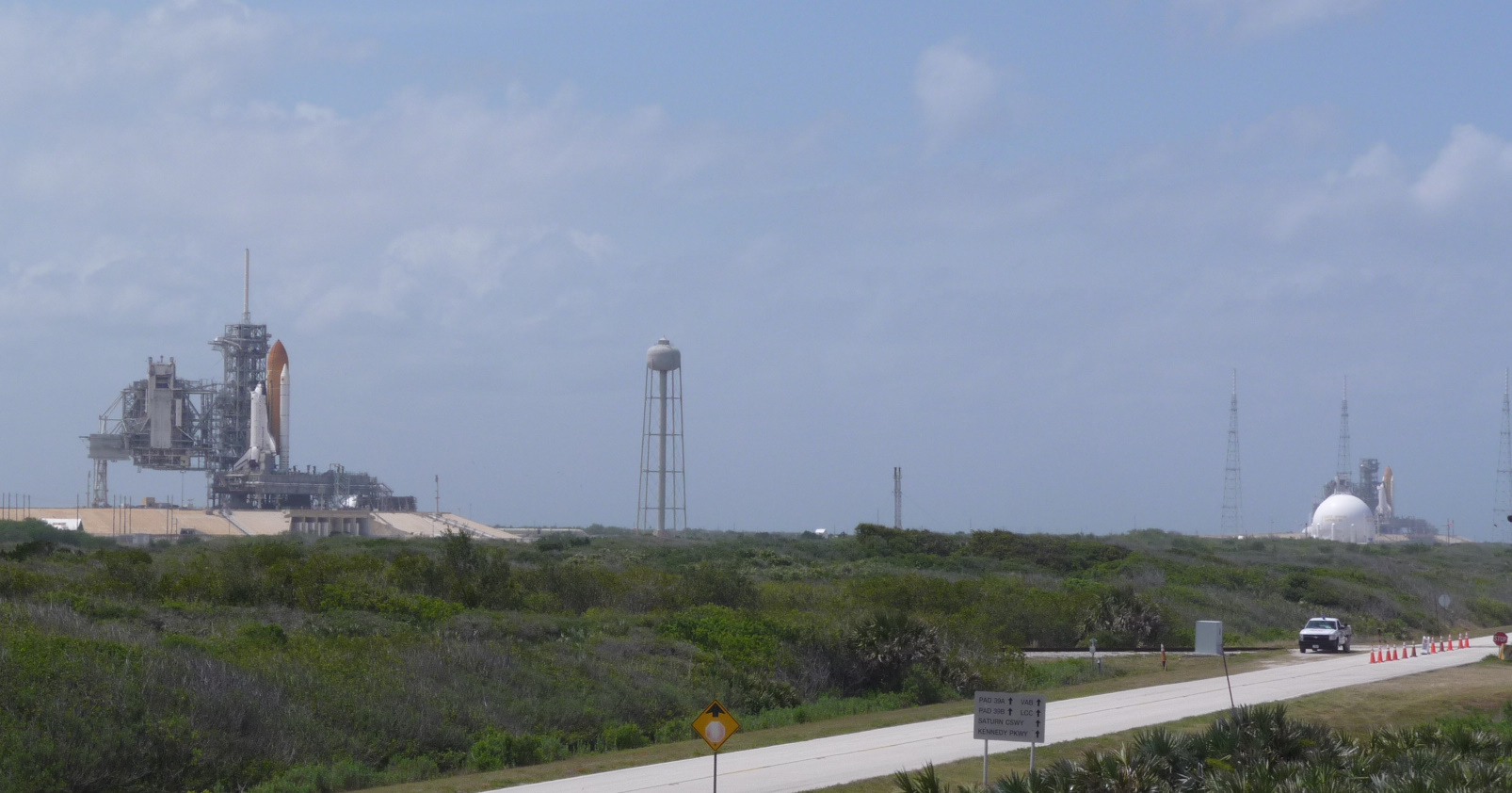 Atlantis and Endeavour on the KSC pads – via L2

The dual flows for Atlantis and Endeavour saw the latter play musical chairs during their processing flows before both taking up residency at the KSC pads.

After the stand-down of the LON requirement was given during STS-125, Endeavour would then be transported from Pad B to Pad A and prepared for her primary mission, STS-126.

As Atlantis launched on STS-125, the Rotating Service Structure (RSS) on 39B was closed to protect Endeavour. 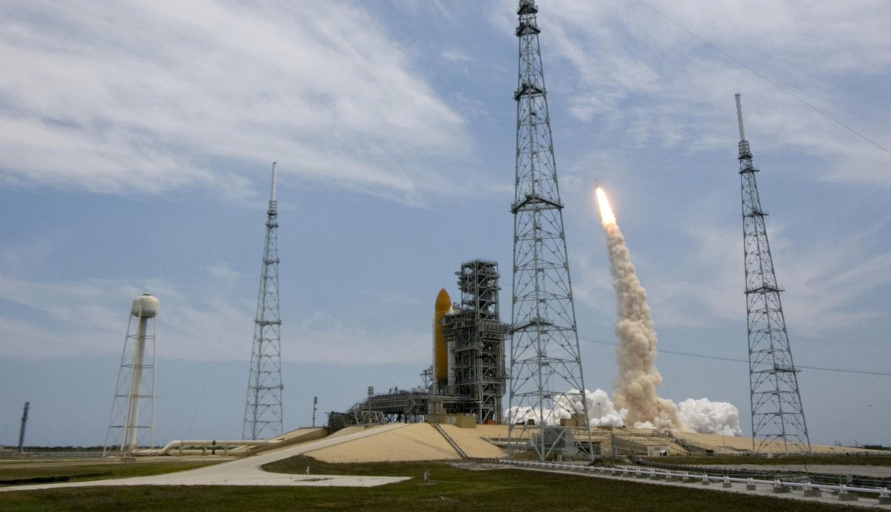 Had Atlantis suffered major damage during ascent, the first option would have been to attempt spacewalks to repair the areas of concern, via onboard items such as the Tile Repair Ablator Dispenser (T-RAD).

If the orbiter was in such a state that she was deemed unable to safely return the crew, Endeavour would have launched within a week.

The STS-400 crew would have been a subset of her STS-126 crew, four crew members, led by Commander Christopher Ferguson and pilot Eric Boe.

Endeavour would have arrived at the stricken Atlantis before Atlantis grappled on to Endeavour via her robotic arm. Endeavour’s robotic arm would be used to help transfer the crew via the two orbiters. 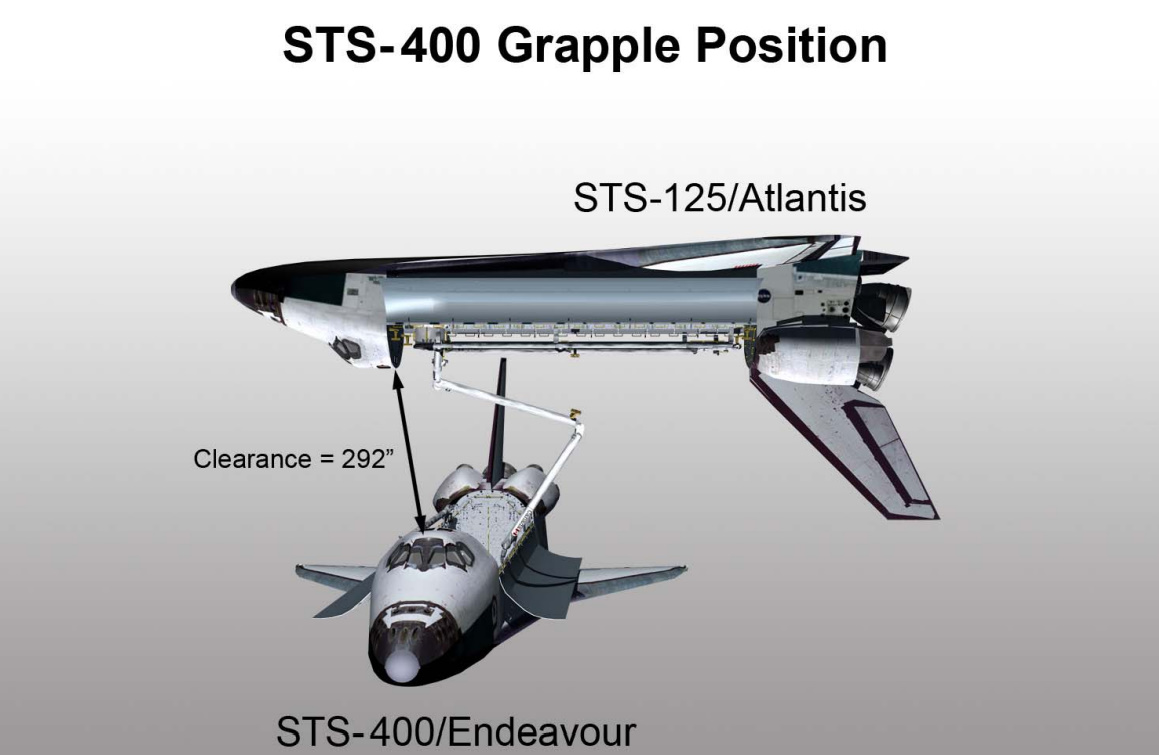 The two orbiters during the grapple and crew transfer – via NASA

A full day’s worth of EVAs would take place, transporting the seven crew members of the STS-125 to Endeavour.

The transfer was more complicated than “just” transferring the crew, as EMU space suits and the crew’s entry suits also had to move during the transfer. 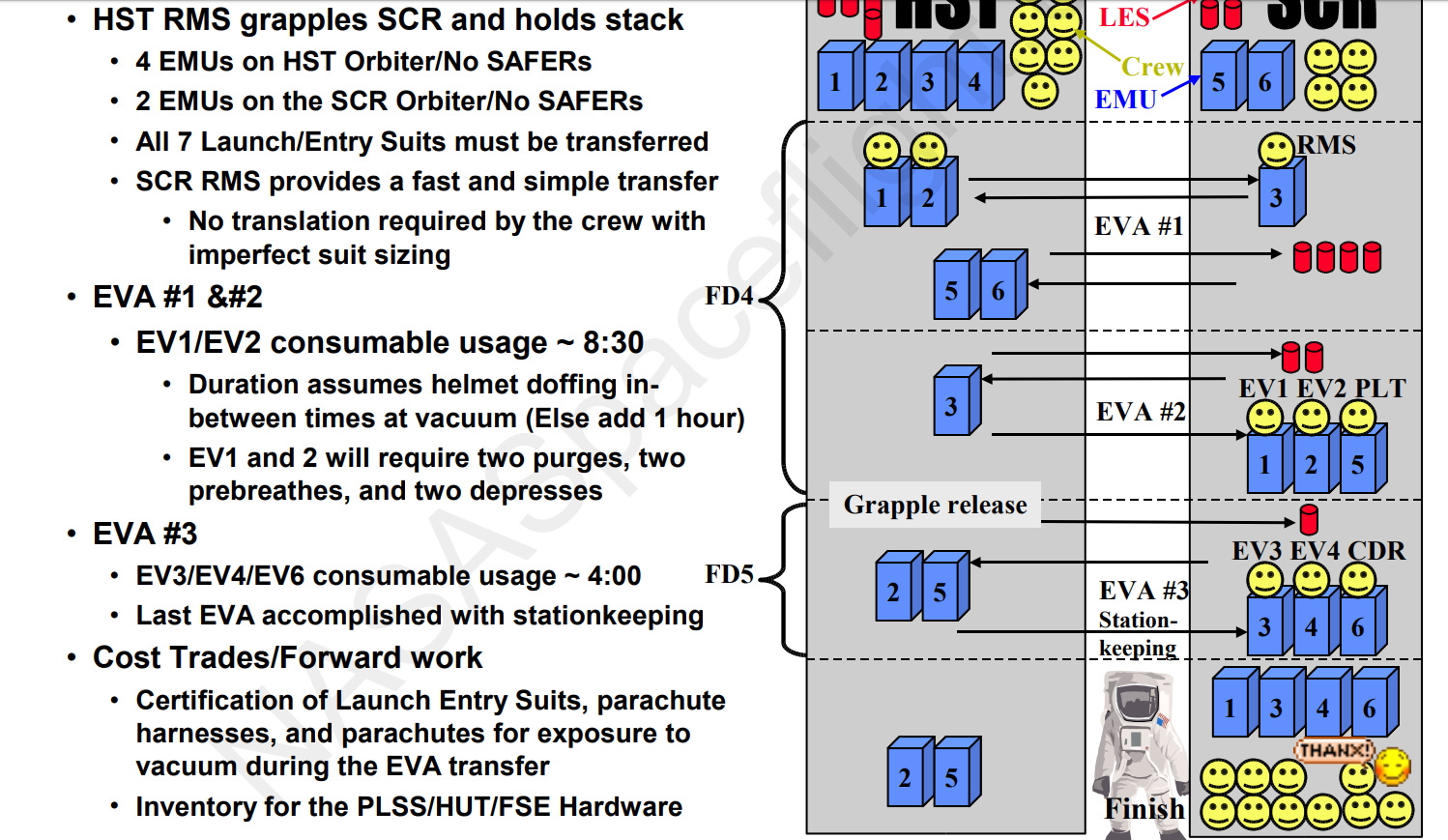 The complex transfer between Atlantis and Endeavour – via L2

Following capture, a 90‐degree yaw of the arm would put the vehicles payload bay‐to‐payload bay providing the most stable attitude and position relative to the Earth’s location ahead of the three spacewalks by Atlantis’ crew to relocate
to Endeavour.

The first spacewalk would have been scheduled to last 4 hours, 50 minutes, followed by three more. The final spacewalk was budgeted for about two hours, 30 minutes. Prior to leaving Atlantis, the orbiter would be reconfigured the vehicle so that she could be ground commanded through a deorbit disposal burn.

Once all the crew and equipment was transferred, the command would be given to ungrapple Atlantis ahead of the return home. The additional crew members on Endeavour would have been accommodated via additional seats installed on the middeck.

Returning the Atlantis crew – via L2 and NASA

Thankfully, none of these procedures were required, as STS-125 was carried out successfully and Atlantis returned home safely.

This removed what would have been one of the riskiest missions undertaken during the 30 year career of the Space Shuttle Fleet, where a crew of four would have launched on an orbiter just days after an event had crippled the orbiter on the previous launch.

The STS-400 crew would have launched on a rescue mission where they would have placed themselves in danger with no back up plan, resulting in both the STS-125 and STS-400 crews being left to their ultimate fate in space.