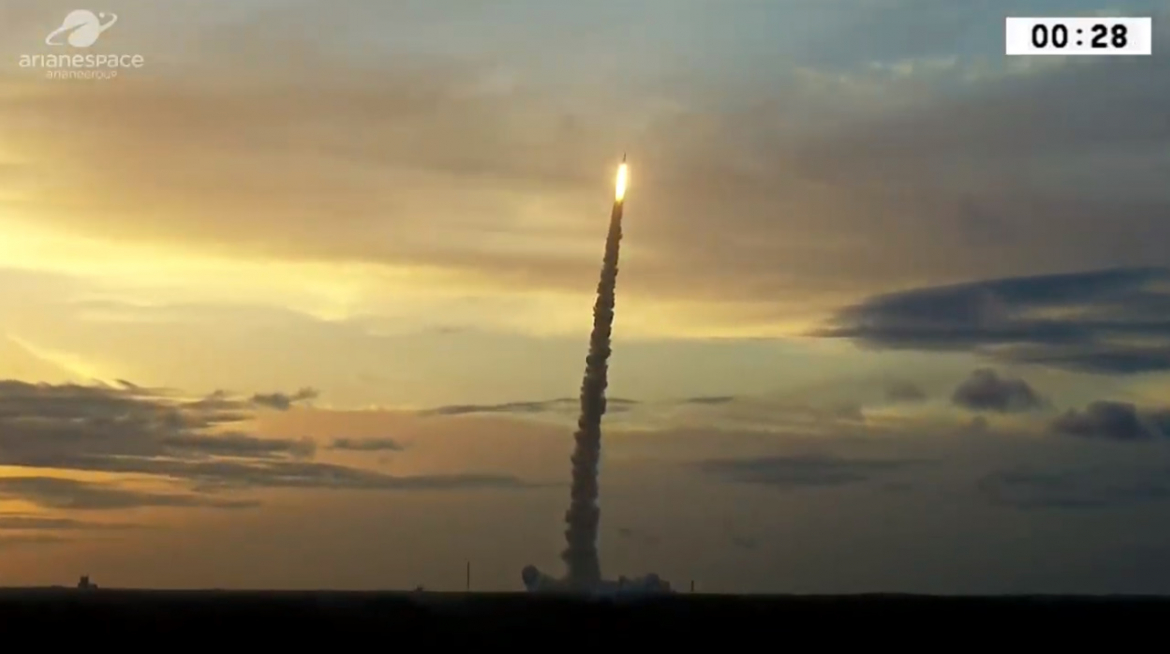 Ariane 5 returned to action on Thursday with the dual passenger launch of two telecommunications satellites, AT&T T-16 and Eutelsat 7C. Liftoff from the European Spaceport in Kourou, French Guiana occurred on schedule at the start of a 47 minute launch window that opened at 21:43 UTC. Flight VA248 launched from Ariane Launch Complex No. 3 (ELA 3).

Flight VA248 was the second Ariane 5 launch of the year following a 2018 that marked 11 missions across the Arianespace fleet. Six used the heavy-lift Ariane 5 – which is one of three launch vehicles operated by Arianespace at the Spaceport, along with the medium-lift Soyuz and light-lift Vega.

Ariane 5’s 2019 opened with the successful Hellas-Sat-4/SaudiGeoSat-1 and GSAT 31 launch in February.

The two satellite passengers for the Ariane 5 flight – AT&T T-16 and EUTELSAT – resulted in the 104th Ariane 5 mission, the 71st with an Ariane 5 ECA version.

Both are telecommunications relay platforms for operation by long-time Arianespace customers: AT&T, which provides mobile, broadband, video and other communications services to U.S.-based consumers; and Eutelsat, the Paris-based company providing satellite capacity to clients that include broadcasters and broadcasting associations, pay-TV operators, video, data and internet service providers, enterprises and government agencies.

The launcher carried a total payload of approximately 10,594 kg.

AT&T T-16 – produced in France by Airbus Defence and Space based on the Eurostar 3000 LX Hybrid platform – occupied the upper passenger position in Ariane 5’s dual-payload configuration and was released first during the launch sequence.

This hybrid-propulsion-powered broadcast satellite can be operated from five different orbital slots (from 99 deg. West to 119 deg. West) following its deployment by Ariane 5, with a coverage area that will include the continental United States, Alaska, Hawaii and Puerto Rico. Its liftoff mass is estimated at 6,350 kg. 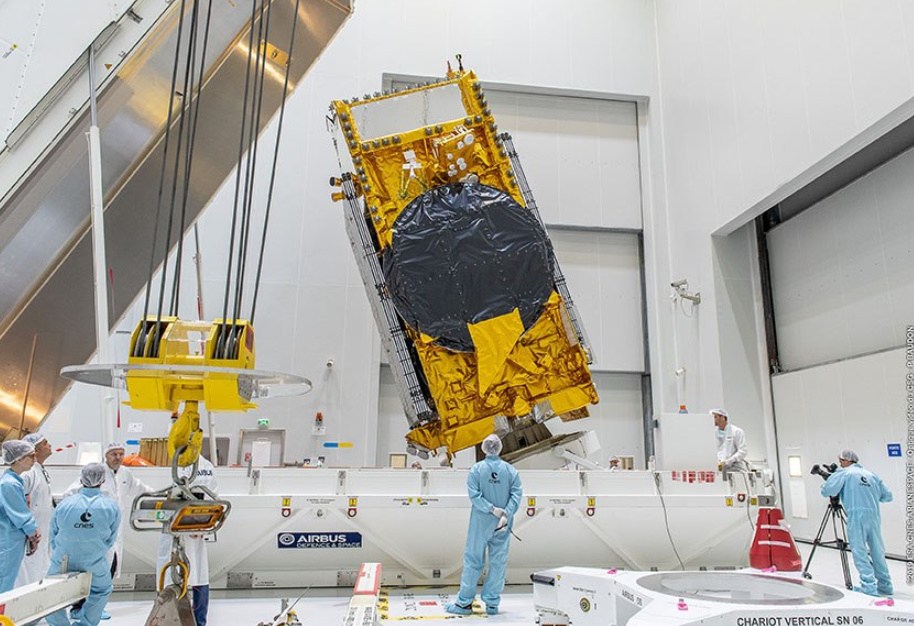 T-16 after arriving at the launch base.

T-16 was manufactured by Airbus Defence and Space and will provide high-power broadcast services in Ku- and Ka-bands. Being flexible, the spacecraft can be operated from five orbital slots (from 99° West to 119° West) and will cover the continental United States, Alaska, Hawaii and Puerto Rico.

T-16 is designed for a lifetime of 15 years. Airbus Defence and Space France is prime contractor for T-16, which will be the 130th spacecraft from this constructor to be launched by Arianespace. There currently are 21 Airbus satellites in Arianespace’s backlog.

EUTELSAT 7C is an all Ku-band satellite equipped with 44 operational transponders to provide service from 7 degrees East longitude. It is also designed with a steerable beam for flexible coverage. 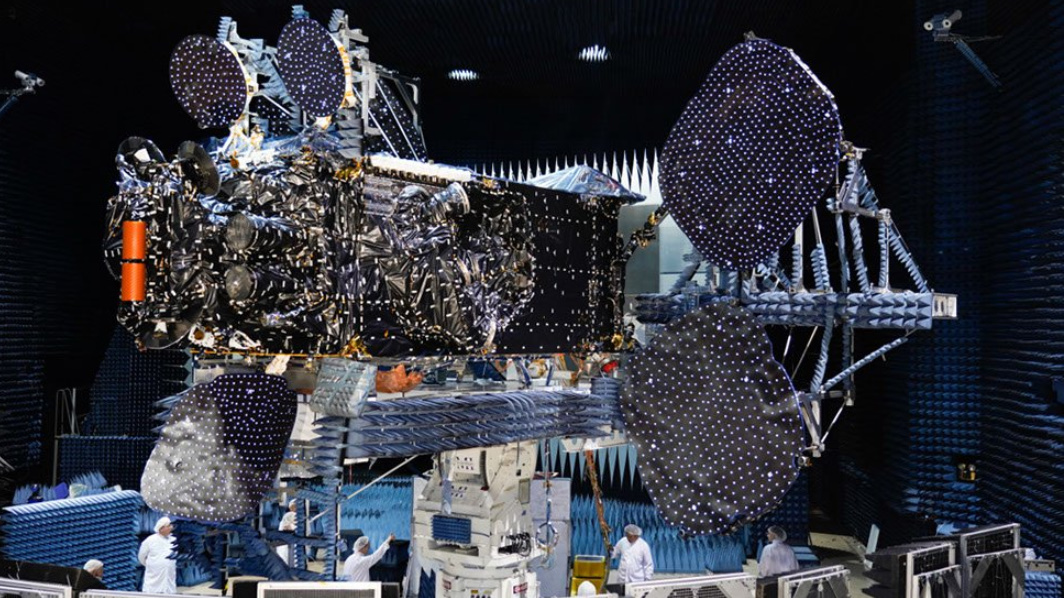 MAXAR photo of the satellite during testing

The new satellite will be copositioned with EUTELSAT 7B, releasing EUTELSAT 7A to another orbital location. This improved two-satellite constellation with enhanced coverage flexibility and connectivity will take the 7° East neighborhood to a new level.

“Following the successful launch of EUTELSAT 65 West A, we look forward to continued collaboration with the Eutelsat team,” said John Celli, president of SSL. “The EUTELSAT 7C spacecraft has advanced capabilities that demonstrate the flexibility and power of the SSL satellite platform.”

By almost doubling capacity over Sub-Saharan Africa, from 22 to 42 transponders, EUTELSAT 7C will have room for several hundred additional digital channels to support the region’s fast expanding TV market. It will also be equipped with a beam providing enhanced capacity for government services over Europe, the Middle East and Central Asia, as well as a steerable beam that can cover any region visible from 7° East.

“EUTELSAT 7C will help us meet ongoing demand for broadcast content delivery in a fast-growing communications environment,” said Rodolphe Belmer, chief executive officer of Eutelsat. “SSL has proven a valued and customer-driven manufacturing partner and we are very pleased to continue working together on advanced satellite technologies.”

The SSL 1300 platform has the flexibility to support a broad range of applications and technology advances.  It will exclusively use electric propulsion for orbit raising as well as station keeping and will provide service for a minimum of 15 years.

EGS preparing ML-1 for validation tests at the Pad