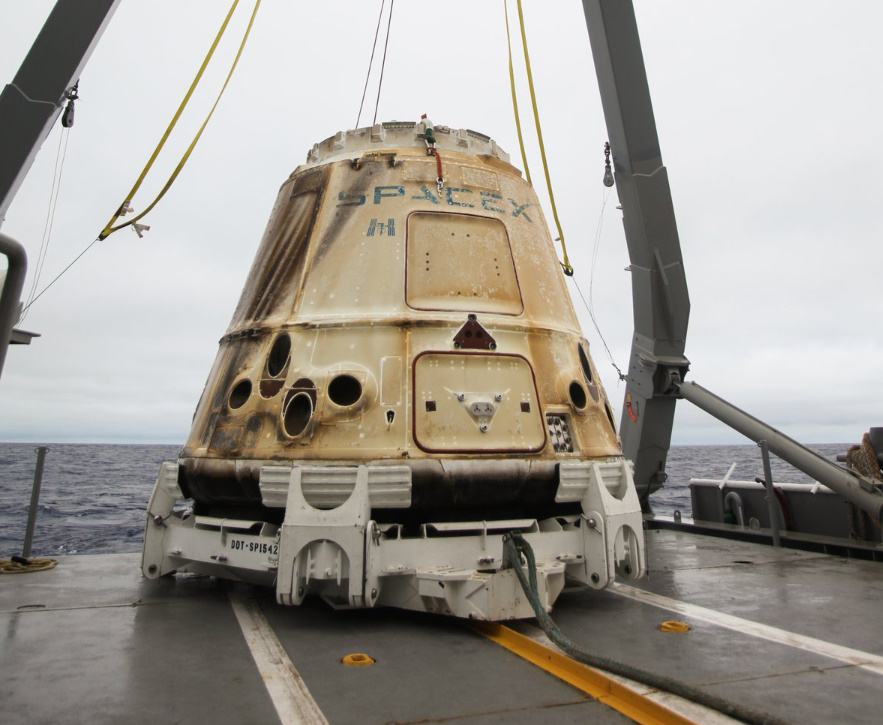 SpaceX’s CRS-17 Dragon spacecraft concluded the EOM (End Of Mission) phase of her mission following unberthing from the International Space Station (ISS) on Monday. Dragon’s release from the Space Station Remote Manipulator System (SSRMS) occurred at 16:00 UTC, with splashdown in the Pacific Ocean around 21:10 UTC on Monday.

The CRS-17 Dragon was launched on Falcon 9 B1056.1 last month.  The booster also returned without issue, allowing it to be prepared for a future mission.

Landed another one. Falcon 9 B1056.1 with her maiden launch and landing. What a view!! Infrared for the win!

Dragon’s cargo includes components for the space station’s new water storage system, filters for a new waste management system, wire harnesses and depressurization indicators that will be used to support future commercial crew flights and the POLARS system that will facilitate transportation of scientific experiments at low temperatures.

Dragon’s unpressurized Trunk contains hardware that will be mounted on the outside of the space station. This includes the Orbiting Carbon Observatory 3 (OCO-3) payload, which will use three spectrometers to measure the density and distribution of carbon dioxide in Earth’s atmosphere.

The Trunk also contained Space Test Program – Houston 6 (STP-H6), a package of eight technology development and demonstration payloads for the US Air Force’s Space Test Program (STP). STP-H6 includes experiments that will test instruments for ionospheric and plasma research, demonstrating computing resources for in-orbit image processing, validating the use of modulated X-rays for communications and testing systems for future satellites.

After both payloads were removed for installation on the ISS, the robotic assets then

Ahead of the return trip, Dragon was packed with downmass and the hatch closed. Robotic ground controllers then used the robotic arm to detach Dragon from the Earth-facing port of the Harmony module to maneuver Dragon into the release position.

Dragon was unberthed by the Space Station Remote Manipulator System (SSRMS) at 12:35 UTC before being released from the robotic arm at 16:00 UTC.

Once the LEE snares were released, the SSRMS was backed away from Dragon as the craft held its position at the 10 meter mark.

SpaceX flight controllers at Hawthorne, California commanded Dragon’s Draco thrusters to fire for 12 minutes and 53 seconds – retrograde – in the deorbit burn that enabled Dragon to slip out of orbit for its descent back to Earth.

Dragon then placed its heat shield out in front in preparation for Entry Interface (EI) – the moment Dragon reaches the first traces of Earth’s upper atmosphere.

Fast recovery vessels deployed begin collecting Dragon’s parachutes as recovery of the capsule itself was conducted by the primary recovery assets.

CRS-18 is the next Dragon mission to the ISS, currently scheduled for July.