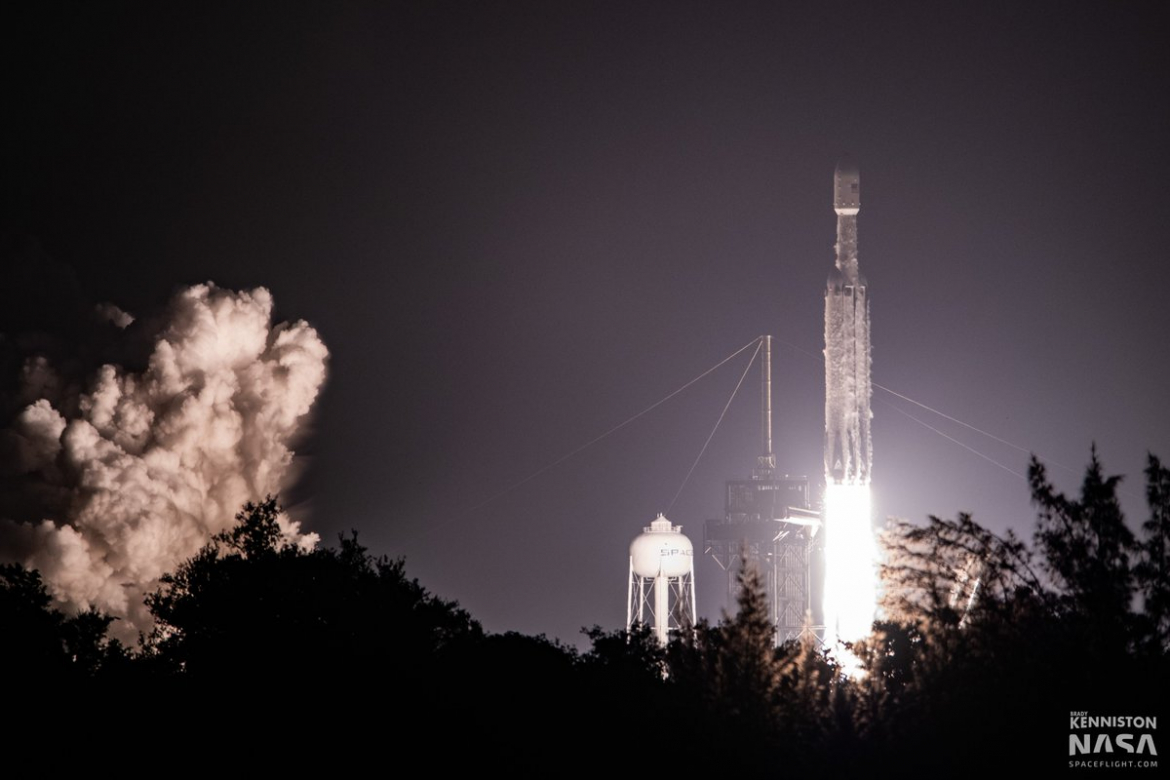 The launch window opened at 23:30 EDT on Monday, 24 June (03:30 UTC on Tuesday 25 June), although the T-0 moved to 02:30 EDT – 3 hours into the window.  After liftoff, the Falcon Heavy’s second stage spent roughly 3.5 hours performing 20 deployments of 24 satellites into various orbits and various orbital inclinations.

STP-2 is a one-of-a-kind mission for SpaceX and the Falcon Heavy rocket.

The triple-booster rocket – the world’s most powerful currently-operational rocket – blasted off under 5.1 million lbf of thrust from Pad 39A in Florida and flew due east out over the Atlantic Ocean.

Launching a remarkably lightweight payload of just 3,700 kg, the Falcon Heavy – at a glance – seemed wildly overpowered for launching a mission of this class into orbit.

However, part of the flight required the second stage to re-ignite three times to radically alter the vehicle’s orbit for the various payload deployments.

This required the second stage to enter orbit with a healthy amount of propellant still inside its tanks – a requirement that therefore drives the need to launch the mission on the Falcon Heavy instead of a regular Falcon 9 because the Falcon Heavy can provide the extra margin to the second stage whereas the regular Falcon 9 – even in its expendable configuration – could not.

Even with the Falcon Heavy’s performance, the center booster – given final mission and performance margin calculations and needs – had to burn so much of its fuel during first stage flight that it was incapable of performing a Boostback burn and therefore free-flew itself 1,200 km downrange from the launch pad before reigniting its engines for the Entry and Landing Burns.

This was to mark the farthest-ever downrange landing of a SpaceX rocket, with Of Course I Still Love You positioned ~1,245 km east of the launch pad. However, the booster  – not unsurprisingly – missed the drone ship.

Having flown the previous Falcon Heavy mission – ArabSat-6A – back in April, the two side boosters from that flight returned for STP-2, again serving as the side boosters. They both successfully landed at LZ-1 and LZ-2.

At 74 days between ArabSat-6A and the STP-2 launch, this was not – by a matter of just 3 days – the fastest booster turnaround for SpaceX.

That record is still held by the Block 4 booster B1045 – the last Falcon 9 Block 4 – which was turned around in just 71 days from its use on TESS (Transiting Exoplanet Survey Satellite) to its use on CRS-15 in April and June 2018, respectively.

All three cores lit – via Nathan Barker for NSF/L2

The center booster for this mission was brand new.

After completing all pre-fueling steps, the Launch Director polled the team at T-53 minutes to verify that all is “go” to proceed with propellant load.

Once that verification was received, fueling began at T-50 minutes with the start of RP-1 kerosene load into all three first stage boosters.

The command to light all 27 first stage Merlin 1D engines was issued by Falcon Heavy’s onboard computers at T-2 seconds – with all engines igniting at once and imparting 5.1 million lbf of thrust into LC-39A.

#SpaceX #FalconHeavy takes flight from Launch Complex 39A at 2:30am EDT with #STP2 pic.twitter.com/fWobJYm2dg

The following was the pre-published timeline of events for the launch and landing sequence.

Based on fleet deployments, with Ms. Tree stationed farther downrange than Of Course I Still Love You, it appears – as of publication – that SpaceX was to attempt to recover the payload fairings.

Elon Musk confirmed the former Mr. Steven had finally caught a fairing half.

In all, 24 payloads were launched on this Falcon Heavy – a mix of government and private testbed experiments that all seek – in some way – to demonstrate potential game-changing technology for future spaceflight endeavours. 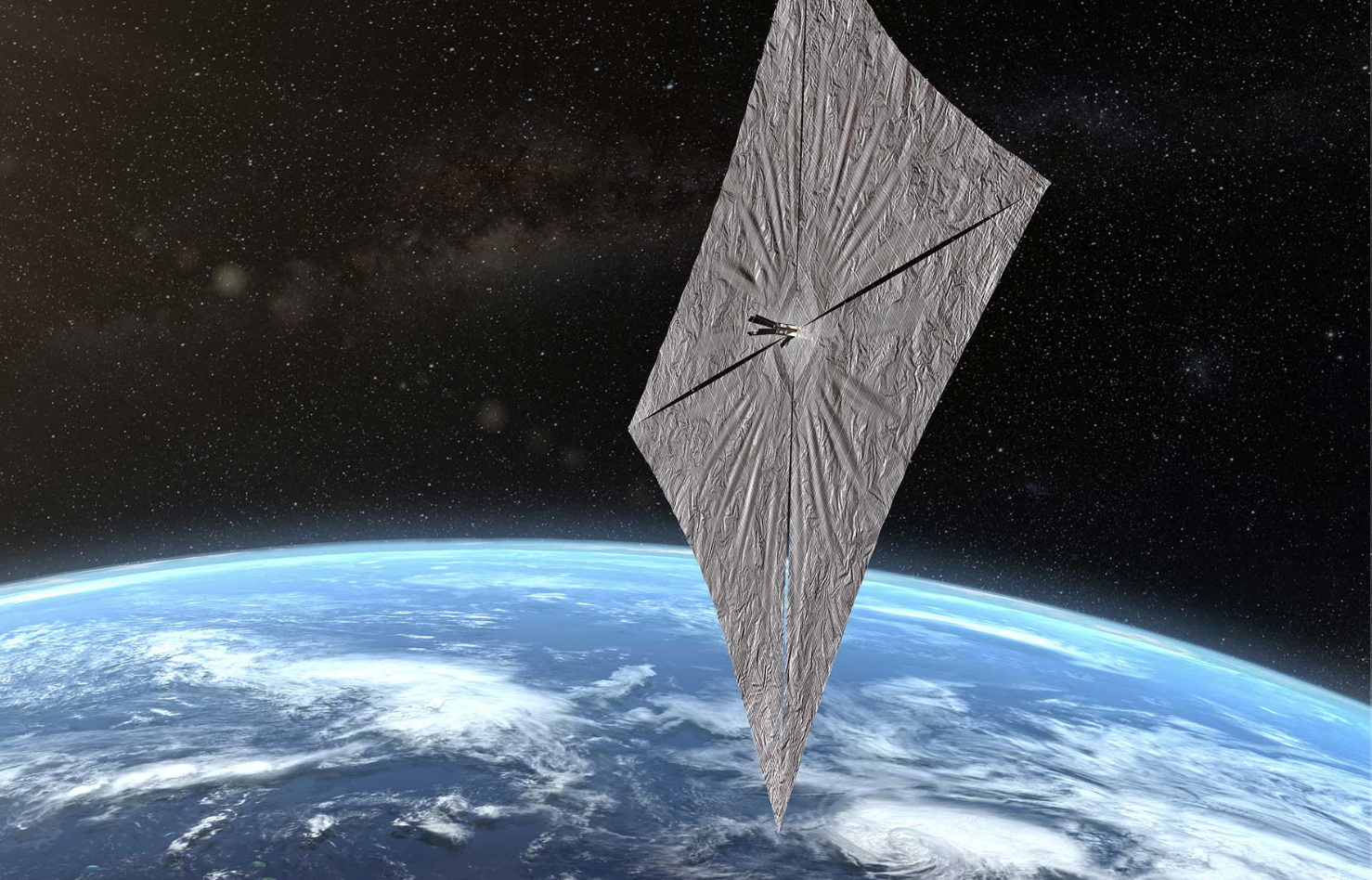 NASASpaceflight has previously detailed several of these payloads.  CLICK HERE to read our past article on some of the experiments flying on the Falcon Heavy today.

In addition to these previewed payloads, a particularly interesting experiment on this flight is the Planetary Society’s Lightsail 2 mission.

A couple days after deployment from the Falcon Heavy’s second stage, it will deploy its solar panels, which will pop up from the four sides of the craft.

This will allow Lightsail 2 to begin charging its eight lithium-ion batteries.

These cameras will allow Planetary Society controllers to image deployment of the solar sail and monitor its health throughout the life of the mission.

Deployment will occur via four cobalt alloy booms that will each be unwound like a tape measure by an on-board motor.

The sail itself is designed with “rip-stop” seams that will prevent large-scale tearing should the sail be hit by space debris.

Spencer: When we deploy #LightSail2's solar sail, we'll choose a pass where we get a half hour of coverage from our ground stations in Kauai Community College, Cal Poly San Luis Obispo, Purdue University, and Georgia Tech. pic.twitter.com/P6N2G88hU2

If all goes to plan with deployment, the sail is expected to impart 0.058 mm/s squared of acceleration that should demonstrate light pressure’s ability to “noticeably change Lightsail’s orbit” around Earth.

Despite its small size, Lightsail 2 carries a cost of $7 million USD – with that funding coming from 400,000 supporters around the world who donated anywhere from $5 to $1 million USD.

“It couldn’t be done without our supporters,” said Jennifer Vaughn, Chief Operating Officer of the Planetary Society.  “This is their spacecraft. We’re so excited to thank them and have their spacecraft finally fly.”

Jumping off that, Bill Nye, Chief Executive Officer of the Planetary Society, said, “We are very excited about this launch because we’re going to get to a high enough altitude to get away from the atmosphere, far enough that we’re really going to be able to build orbital energy and take some, I hope, inspiring pictures.

“What we do at The Planetary Society is advance space science and exploration.  LightSail 2 is a big part of that. I cannot help but harken to the words of test pilot Tex Johnston who said, ‘One test is worth a thousand expert opinions.’

“This is one of the really, to me, exciting, and, for me, fascinating aspects of the LightSail 2 mission.  We’re going to see what really happens as we try to increase orbital altitude. … We’ve done all sorts of mathematical models, but we’re going to see how it really works.”

Lightsail 2’s total life expectancy is – of course – dependent on the successful deployment of the solar panels and sail itself.

If all works as planned, the mission should last about one year.