The busy life of the Space Station Robots 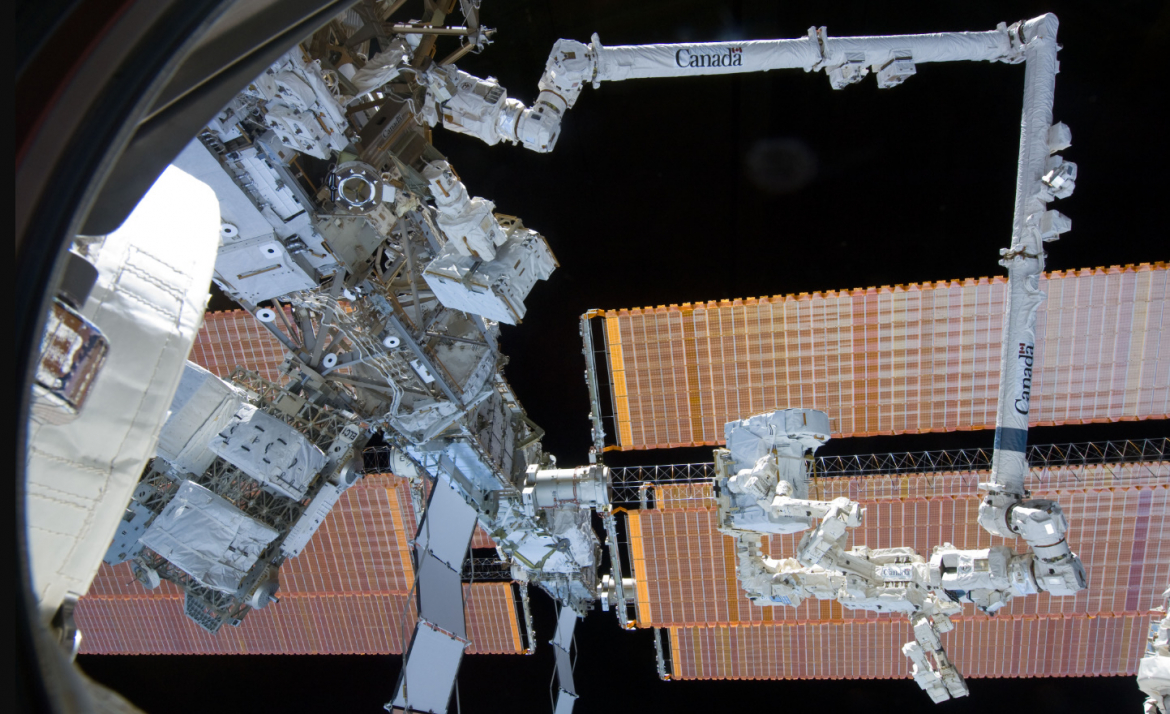 The Space Station’s Canadian robotic arms have enjoyed another busy month, starting with the release of a SpaceX Dragon and ending with the deployment of a microsat. The Special Purpose Dexterous Manipulator (SPDM) – best known as Dextre – is also looking forward to NASA’s Robotic Refueling Mission 3 (RRM3), while it was recently announced that the Canadian Space Agency will build an advanced robotic arm for NASA’s Lunar Gateway.

While most followers of space flight will be aware of the robotic arms at work on the ISS, not least via their star role in capturing spacecraft arriving at the orbital outpost, it was their role with the Space Shuttle that both vastly increased the capability of those missions and later their safety.

It went on to aid numerous tasks, from deploying payloads to providing assistance to spacewalks and not least on Hubble servicing missions, during which the space telescope would be grappled and pulled into the cargo bay, before moving to assist a string of EVAs to upgrade the hardware. 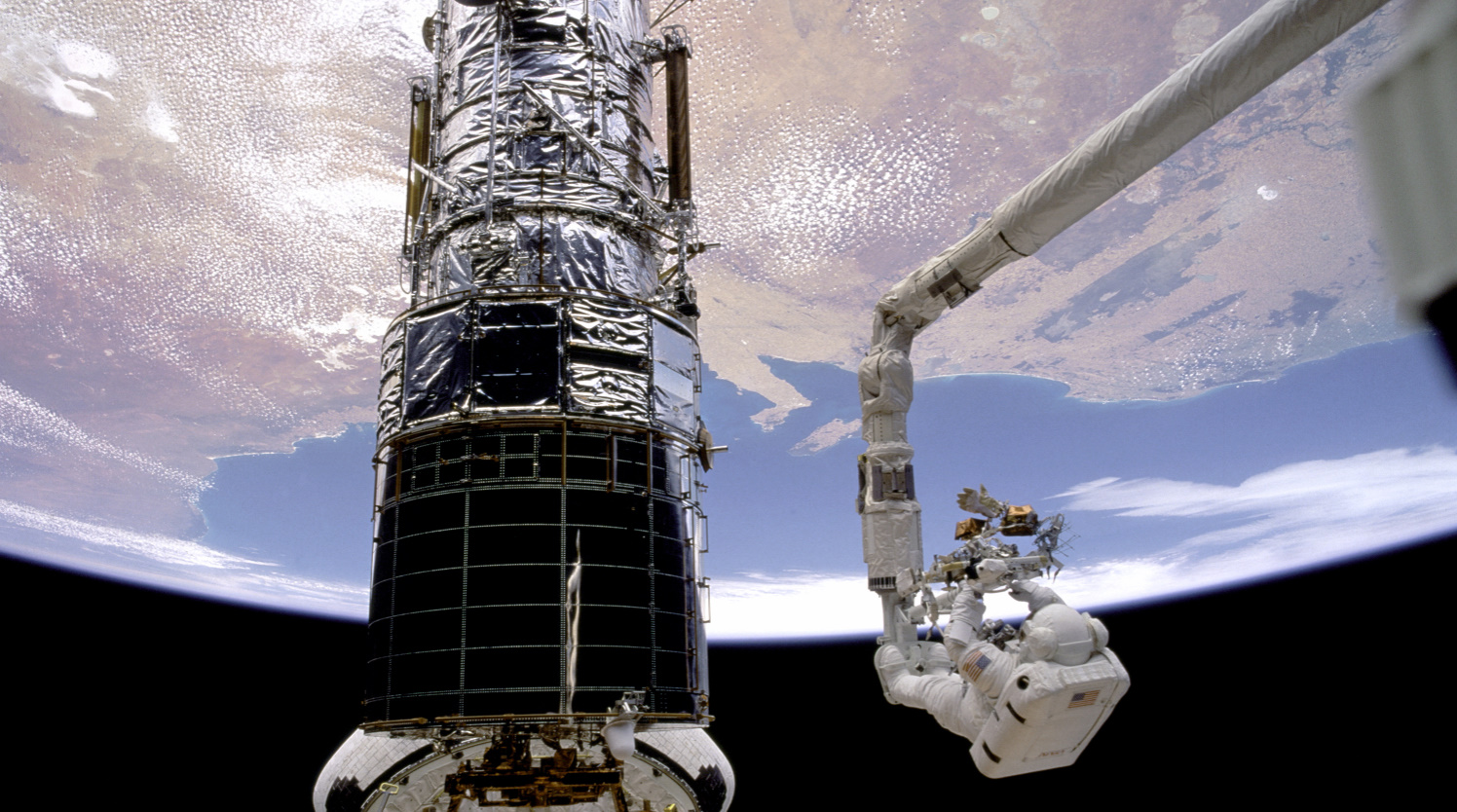 SRMS assisting Story Musgrave during the STS-61 mission – via NASA

Following the loss of Columbia during STS-107, another 50 foot boom was added to the orbiter fleet on the opposite side of the cargo bay. The Orbiter Boom Sensor System (OBSS) hosted a suite of cameras and sensors allowing for surveys of the vehicle’s Thermal Protection System (TPS).

Vast amounts of photos, video and data were acquired by the OBSS sensor suite and sent to the Damage Assesment Team (DAT) to aid the green light for an orbiter to safely return to Earth. It provided a capability that was sorely missed during the evaluations into Columbia’s ill-fated flight.

Shuttle Endeavour also carried the robotic arms to the ISS, with Canadarm2 (SSRMS) being launched early into the ISS assembly phase on Endeavour’s STS-100 flight. The SSRMS is a more advanced version of its Shuttle colleague, while another addition in the form of Dextre would advance the capability yet further. Dextre rode to space in the payload bay of Shuttle Endeavour in 2008 (STS-123).

Dextre was assembled during STS-123 EVAs, with spacewalkers Rick Linnehan and Mike Foreman installing the robots 11-foot arms to the torso of the robot on Flight Day 6 on the mission.

Numerous milestones were achieved with the robotic gang over the following years. One such example was when the SSRMS and OBSS combined to provide the reach and access to the torn P6 solar array.

Scott Parazynski rode on the end of the OBSS and SSRMS combination during his EVA during STS-120. The repair has held in place ever since. 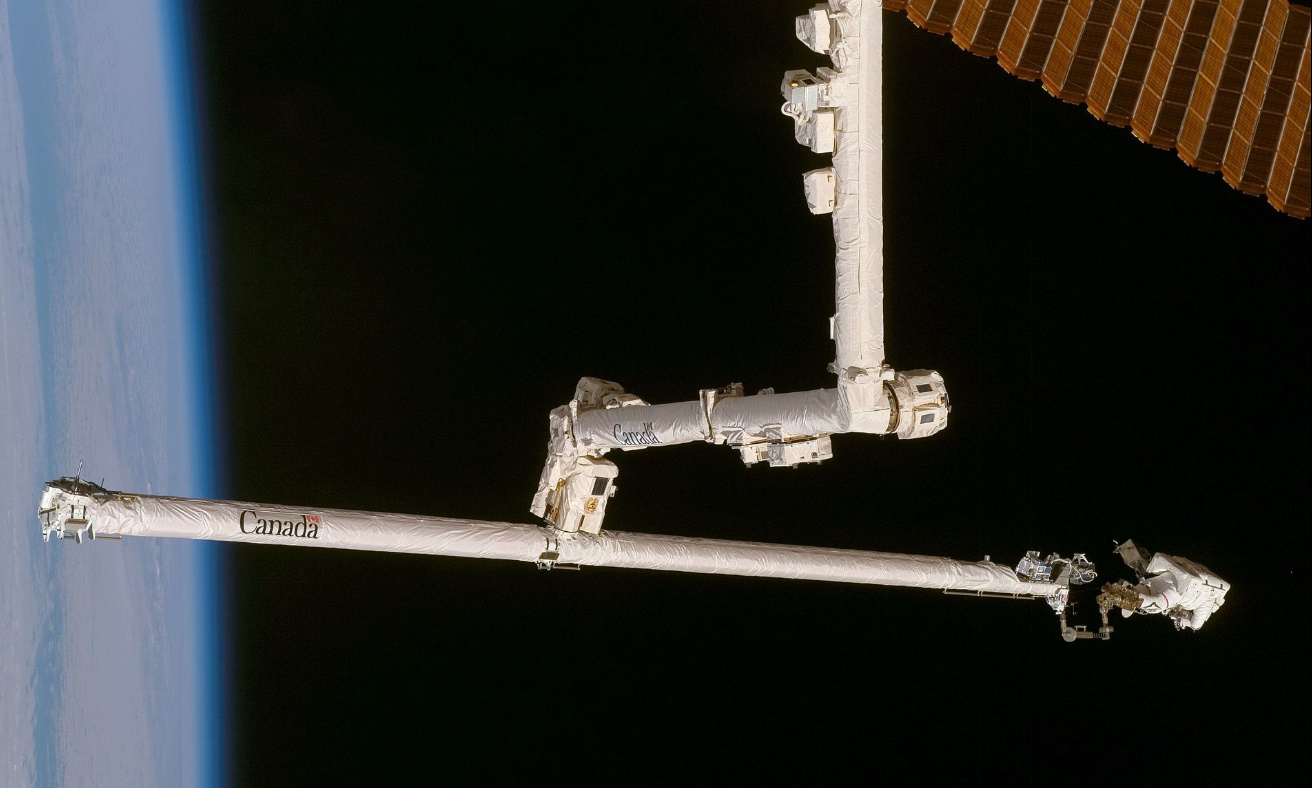 Scott Parazynski during STS-120 – via NASA

Such was the value of the OBSS being used as an extension, one OBSS was donated to the ISS during the final flights of the Shuttle.

The OBSS, fittingly provided by Shuttle Endeavour, now resides on the Station under the new call sign of the Integrated Boom Assembly (IBA).

The robotic assets have continued to perform well during their ISS tour, with the SSRMS performing numerous tasks, such as capturing spacecraft that require berthing – and unberthing – namely CRS Dragon, Cygnus and the Japanese HTV.

That role was carried out early in June when the SSRMS unberthed and released the CRS-17 Dragon.

The release was nominal. However, there was an issue during the process of unberthing the spacecraft from Node 2. 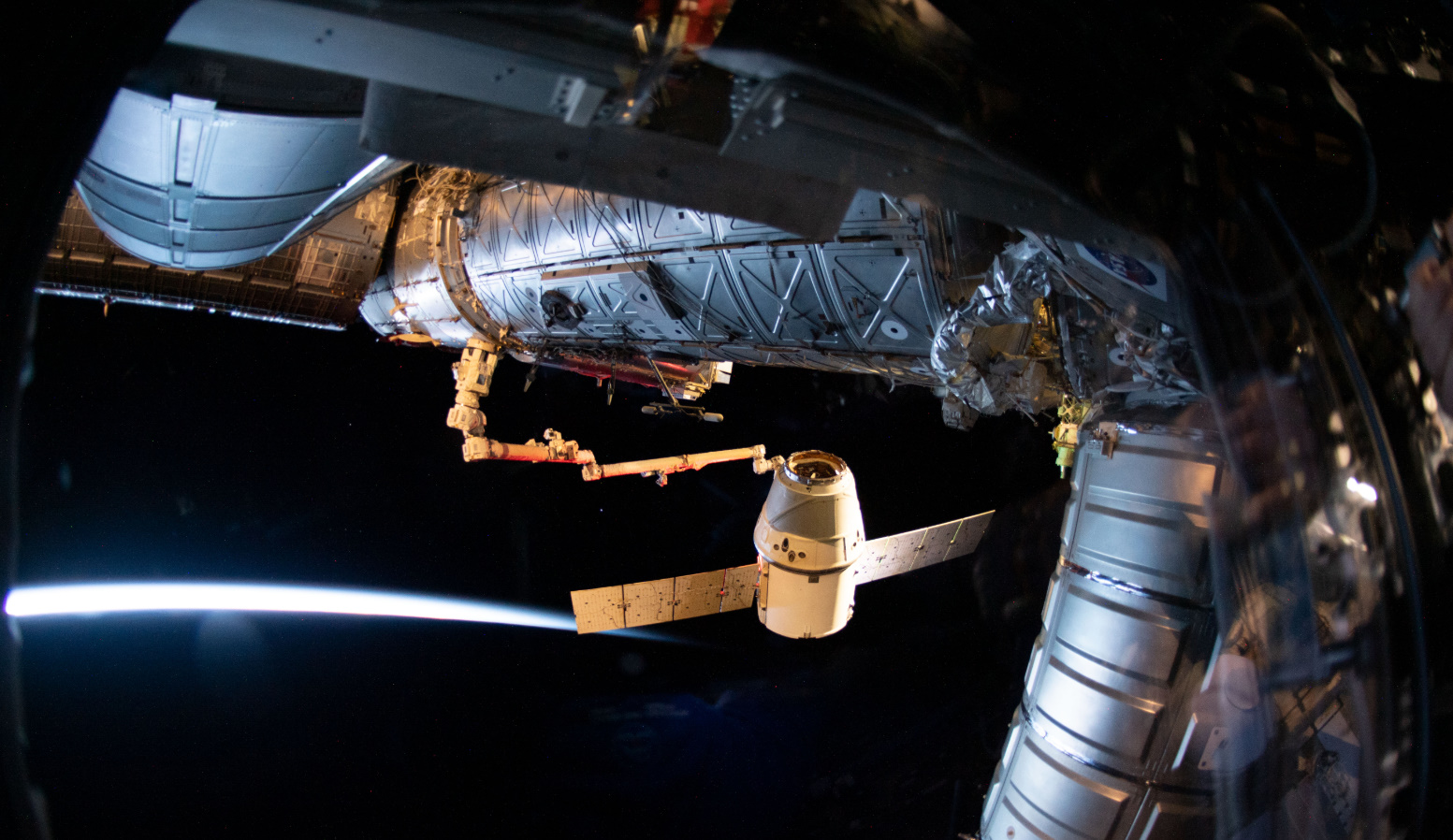 SSRMS unberths the CRS-17 Dragon from Node 2 – via NASA

“Because the Node 2 and Dragon Common Berthing Mechanisms (CBMs) were still in contact, Ready-to-Latch spring forces were present in the system, and upon commanding GBL, the CBMs separated unexpectedly by ~48 cm as this stored energy was released. No adverse results were noted.”

Teams then conducted a survey of LEE A Survey.

The SSRMS can be moved on a Mobile Transporter that runs on rails up and down the spine of the ISS. This was put into action for the next task involving some housekeeping on the outside of the Station.

The SSRMS riding the MT – via NASA

Driving the arms is a tricky task, as noted in the status information when Dextre got a little too close to some insulation material. However, controllers were on the case and soon solved the clearance issue.

“Light contact occurred between ORU Tool Changeout Mechanism-2 (OTCM) and the LDU multilayer insulation (MLI) during the grasp operation. A slightly modified trajectory was used to bias away from the MLI for completion of the grasp and later for the ungrasp and backaway.”

Dextre then conducted the Flight Releasable Attachment Mechanism (FRAM) swaps in the middle of June.

“This configuration allows for better Extravehicular Activity (EVA) Extravehicular Mobility Unit (EMU) access to the spare BCDU. The EMU had clearance issue at ESP 3 site 6 due to the neighboring Space to Ground Antenna (SGANT).”

The SSRMS translated back to Worksite 2 (WS2) where the SPDM installed the empty BDCU FSE on ESP 3 site 6, completing the FRAM swap work.

After a short breather for the robots and their handlers, ground controllers then stowed the Robot Micro Conical Tool (RMCT) and Dextre performed a walkoff of the SSRMS to the Mobile Base System (MBS) 1 and translated the Mobile Transporter from worksite 2 to worksite 7.

These tasks were in preparation for the Red-Eye satellite deployment that was conducted this week.

Dextre is hard at work today!

The Kaber microsat deployer was just extracted off the JEM slide table.
🤖🚀 pic.twitter.com/KWjWkeqkMV

Dextre then maneuvered to the deploy position, conducted a successful satellite deployment and returned the Kaber deployment system to JEM Airlock Slide Table. 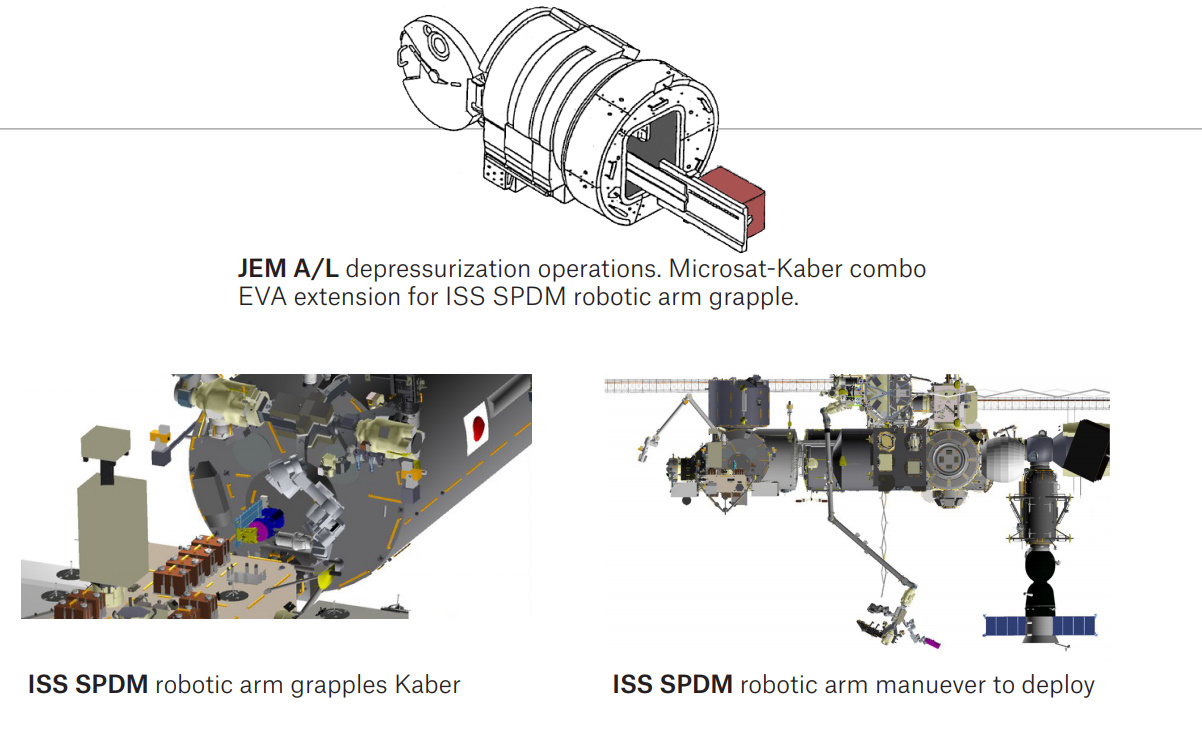 Nanoracks overview of the deployment system

Dextre is keeping itself busy ahead of being tasked with the major role of the next Robotic Refuelling Mission (RRM) objectives.

RRM is an ISS payload developed by the Satellite Servicing Capabilities Office (SSCO) at NASA’s Goddard Space Flight Center (GSFC) – the same team that managed the highly intricate Hubble Space Telescope (HST) Servicing Missions via the Space Shuttle. It is designed to test procedures for refueling satellites in space.

The RRM1 launched on STS-135 in July 2011 and Dextre showed off its skills by using an array of tools to conduct objectives that are set to be employed on future missions.

RRM3 – launched on a SpaceX Dragon – builds on the first two phases of ISS technology demonstrations that tested tools, technologies, and techniques to refuel and repair satellites in orbit. 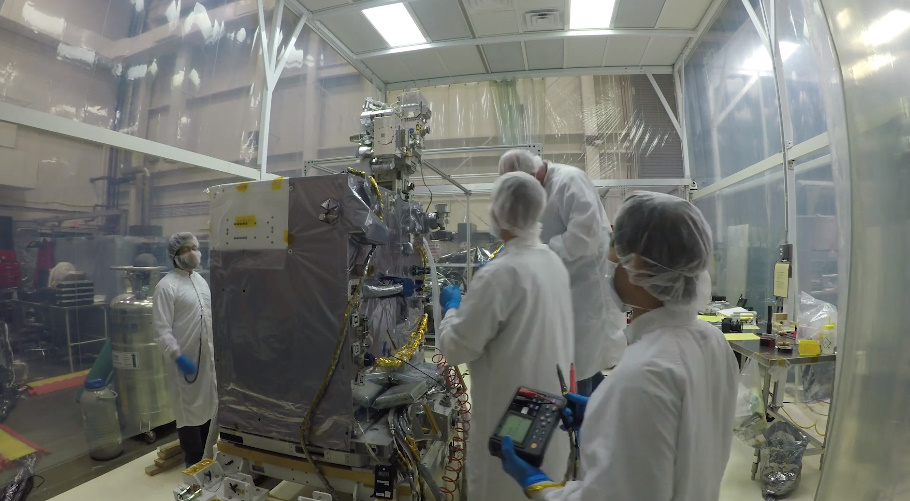 RRM3 will extend these demonstrations to include technologies needed to store and transfer super-cold cryogenic fluids.

Such has been the success of the Canadian robots on the ISS, it was little surprise when it was announced that the robotic arm to be used on the Lunar Gateway would be another Canadarm.

Canada’s contribution to the Lunar Gateway will be a smart robotic system which includes a next-generation robotic arm known as Canadarm3, as well as equipment, and specialized tools. 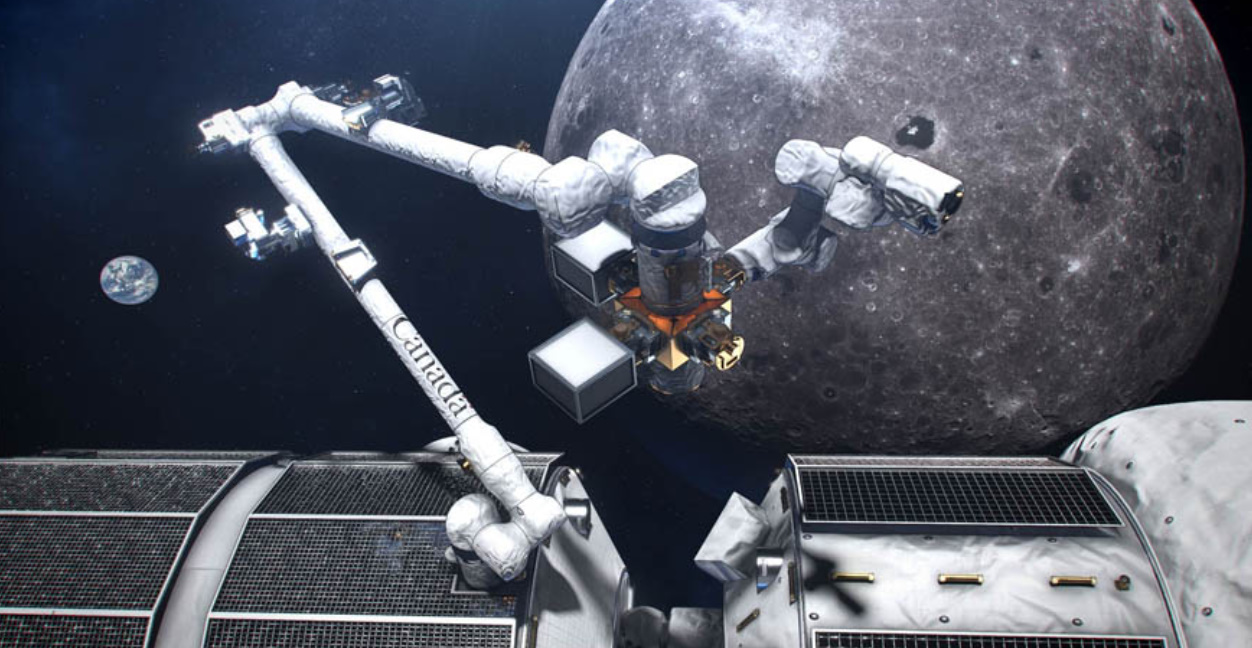 Artistic impression of Canadarm3 on the Gateway – via CSA

The arm will build on the decades of experience already gained via the use of the systems on the Shuttle and ISS, allowing Canadarm3 to maintain, repair and inspect the Gateway, capture visiting vehicles, relocate Gateway modules, help astronauts during spacewalks and enable science both in lunar orbit and on the surface of the Moon.