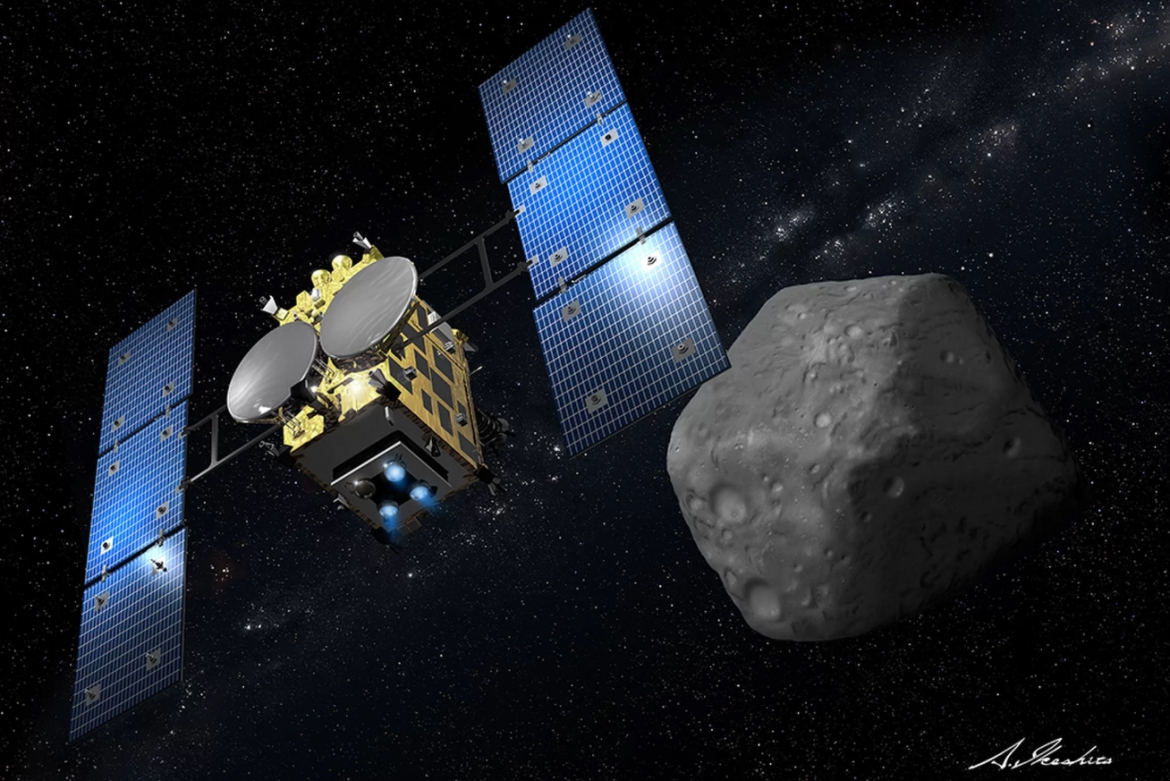 The Japanese asteroid sampling mission Hayabusa2 – launched on December 3, 2014 aboard an H-IIA rocket from Tanegashima, Japan – completed its long flight to asteroid Ryugu (formerly 1999 JU3) before – on September 21, 2018 – achieving the milestone of deploying its two tiny MINERVA-II robots/rovers, followed later by the deployment of the MASCOT lander, touched the surface itself – and has now a survey of a crater it created by dropping an impactor on to its surface. It also touched down for a second time in July.

The mission was approved as a follow-on to the Hayabusa mission which became the first probe to sample an asteroid when it landed on the young “rubble pile” asteroid Itokawa, though the mission had its share of problems.

The Hayabusa mission to Itokawa had problems with one of its four ion engines from the start of the mission after a solar flare damaged the craft and two reaction wheels failed before its approach to Itokawa.

The hopper that was supposed to land on the surface missed the asteroid and flew off into deep space, the sampling mechanism did not function properly, and although Hayabusa was able to land on Itokawa, it suffered thruster leaks and another ion engine failed during the trip home, and contact was lost for several weeks after the second landing on Itokawa, delaying Hayabusa’s departure to Earth.

Despite this, 1,500 microscopic samples from Itokawa were successfully returned and examined after the capsule landed in the Woomera test range in Australia in 2010.

The Hayabusa2 follow-on has one more reaction wheel (to make four) and improved, higher thrust ion engines, along with a backup asteroid sampling system, and the spacecraft is in good health so far.

Hayabusa2 is a 600 kilogram (1300 pound) spacecraft that is based on the Hayabusa craft, with some improvements.

It is powered by two solar panels and uses an ion engine with xenon propellant as its main propulsion source. The ion engine technology was first used in the Deep Space One experimental spacecraft in the late 1990’s and also has been successfully used in the Dawn asteroid probe as well. 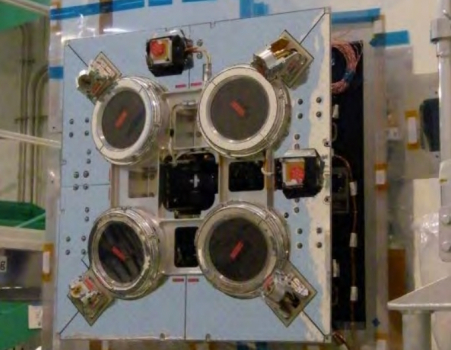 Although the thrust is very low it is continuous and can be used to propel a spacecraft to very high velocities over time, very efficiently.

The craft also features thrusters and four reaction wheels to maintain its position in space as well as four auxiliary lander/hopper craft, a sub-satellite, and an impactor, along with sampling mechanisms, a full suite of science instruments and a reentry capsule to return samples to Earth.

The Hayabusa2 mission is intended to image and sample the asteroid 1999 JU3, discovered in May 1999, now known as Ryugu, and to return samples of the asteroid, including samples excavated from an impactor to collect materials from under the surface, to Earth for analysis in laboratories.

Besides the primary and backup sample collectors, the mission includes three MINERVA “hoppers” similar to the one used on the original Hayabusa mission that will land at several locations on the surface to study these locations with cameras and thermometers.

An impactor (SCI) with a 2 kg pure copper lump (Liner) has also been used to excavate a crater on the surface, and a sub-satellite that will be released to observe the impact.

The main imaging instrument is the ONC (Optical Navigation Camera) which has telephoto and wide-angle modes, and which was used to provide optical images of Ryugu, which are being used to navigate Hayabusa2 safely to the asteroid. This instrument is imaging the surface.

International contributions include a small robotic lander (10 kilograms or 20 pounds) called MASCOT that is a joint venture of DLR (Germany) and CNES (France), while NASA is providing communications through the Deep Space Network. 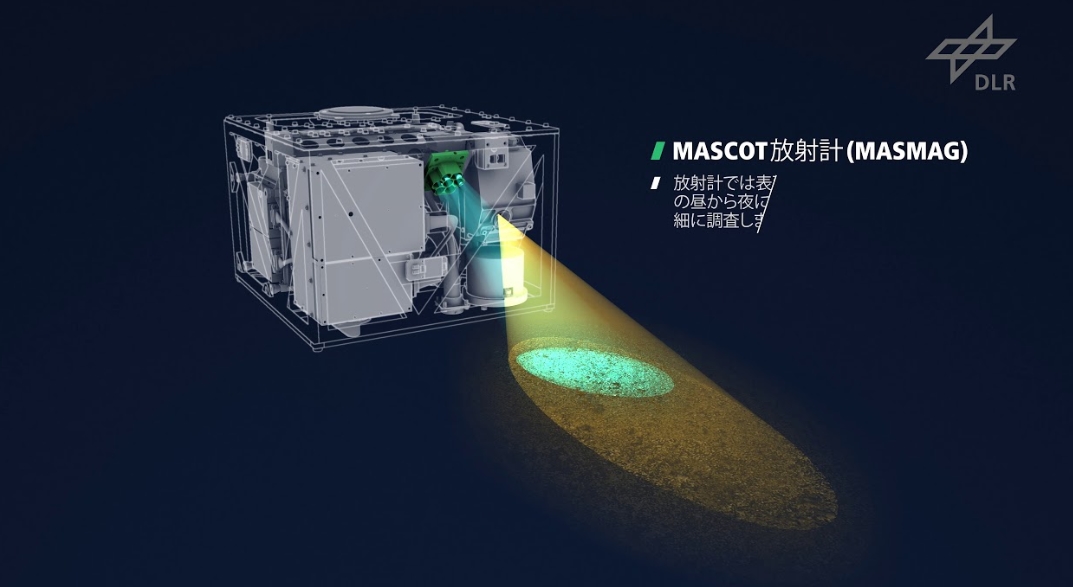 MASCOT’s purpose is to provide extremely detailed mineralogical and geological surveys of the asteroid’s surface, providing up to 16 hours of data with a battery lasting two asteroidal days, and used four instruments (MicrOmega – a hyperspectral microscope, MAG – a magnetometer, CAM – a camera, and MARA – a radiometer) to do this.

MASCOT “jumped” to various sites on the surface using a robotic arm to study these sites in detail, after being released from Hayabusa2 100 meters (328 feet) above the surface of the asteroid. MASCOT systems are based on designs from Rosetta/Philae, Phobos-Grunt, and ExoMars. The landing took place overnight between October 2 and 3.

First, the Hayabusa2 craft finished its first correction burn and was less than 600 kilometers (372 miles) away from asteroid Ryugu just a few months ago. It then closed in, just above the surface, on September 20-21.

Hayabusa2 is getting closer and closer to Asteroid Ryugu! Gif by NSF member mlindner.

The craft also searched for any satellites that may be orbiting the asteroid and has not detected any so far (detection limit: larger than 50 cm). Other asteroids such as Ida have been found to have satellites, and satellites can be hazards to navigation for spacecraft like Hayabusa2.

Ryugu itself is approximately 880 meters wide (nearly a kilometer), rotates around its axis every 7 hours 38 minutes, and is thought to be very dark (0.05 albedo).

Ryugu orbits from a distance just within Earth’s orbit to as far as just outside Mars’ orbit around the Sun, and its orbital radius around the Sun is 180 million kilometers (111 million miles), orbiting the Sun in 1.3 Earth years.

It is believed that Ryugu is an older C-type asteroid that may have material from the beginning of the solar system (including water and organics), or at least more ancient material, as opposed to Itokawa, an S-type asteroid. Ryugu appears to be mostly spherical, unlike Itokawa’s potato shape. 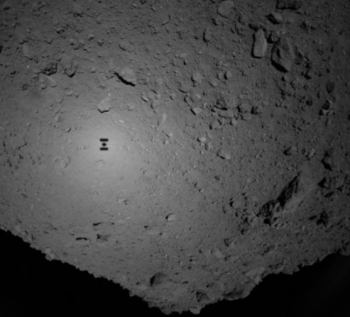 Shadow of the spacecraft – via JAXA

Its arrival at Ryugu occurred around June 27th, and Hayabusa2 was 20 km (12 miles) above the surface on that date.

After arrival, Hayabusa2 started imaging the asteroid, with medium altitude observations at 5 km (3 miles) starting at the end of July. In August, Hayabusa2 measured the asteroid’s gravity by going to an altitude of 1 km (0.6 miles) above the surface, and this was followed by the milestone of MINERVA-II deployment.

After solar conjunction in late fall (November – December) where communication will not be possible with the probe, Hayabusa2 resumed contact afterward and conduct more medium altitude observations at 5 km to start 2019, with the touchdown in February.

Then came another mission objective came with the artificial crater experiment using the impactor.

This video shows the descent of the SCI (Small Carry-on Impactor) made from images captured at 2 second intervals just after separation from Hayabusa2 by the onboard TIR (Thermal Infrared Camera). In the background, you can see the surface of Ryugu 500m away. pic.twitter.com/O5niPDb2XI

That came via the deployment of the Small Carry-on Impactor” (SCI) device, which impacted on the asteroid and then allowed for the spacecraft to take a closer look. The results appeared to surprise scientists.

“Crater formation where the Small Carry-on Impactor collided with Ryugu has been confirmed! These images compare the surface before and after the SCI collision,” noted JAXA on Twitter.

“The exact size and shape of the artificial crater will be examined in detail in the future, but we can see that terrain of an area about 20m wide has changed. We did not expect such a big alternation so a lively debate has been initiated in the project!”

[CRA2] Crater formation where the Small Carry-on Impactor collided with Ryugu has been confirmed! These images compare the surface before and after the SCI collision. pic.twitter.com/BZPYlHhSjs

The more touchdowns followed in July, the second occurring on July 11 Japanese time. The Hayabusa2 craft will remain near Ryugu until the end of 2019 (November or December) when it will depart for Earth after 18 months at Ryugu. The sample delivery reentry capsule is set to be returned to Earth in late 2020. 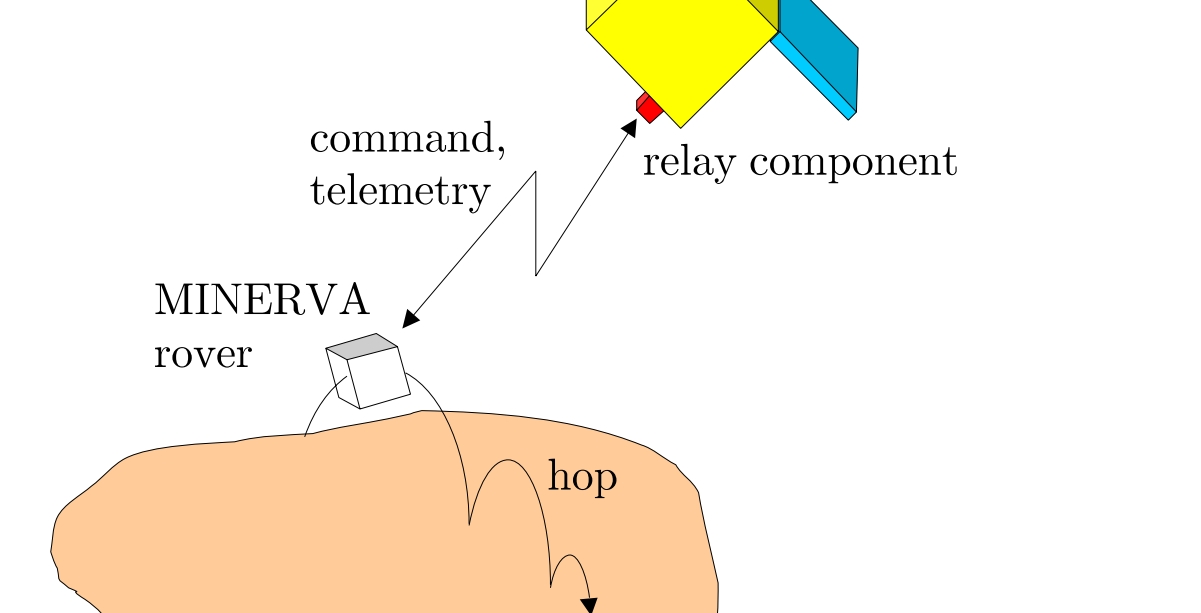 Asteroids are remnants of the building blocks of the solar system and can tell us important details about how the solar system, and by extension Earth and ourselves, came to be, and asteroids can and have endangered life on this planet throughout geologic history. Most notably, a 10 kilometer (6 mile) wide asteroid hit the area of the Yucatán in Mexico 65 million years ago and ended the reign of the dinosaurs.

A future asteroid could pose a similar threat to humanity and Ryugu is classified as one of these “potentially hazardous asteroids” (PHAs) in the Apollo group.

What we learn about these asteroids will inform how we intercept one if the time ever came. Finally, asteroids are being looked at as potential sites for mining metals for future industries, and the composition of asteroids like Ryugu will inform mining plans as well.

For all these reasons, missions like Hayabusa2, Osiris-Rex and others are very important efforts to understand the solar system.