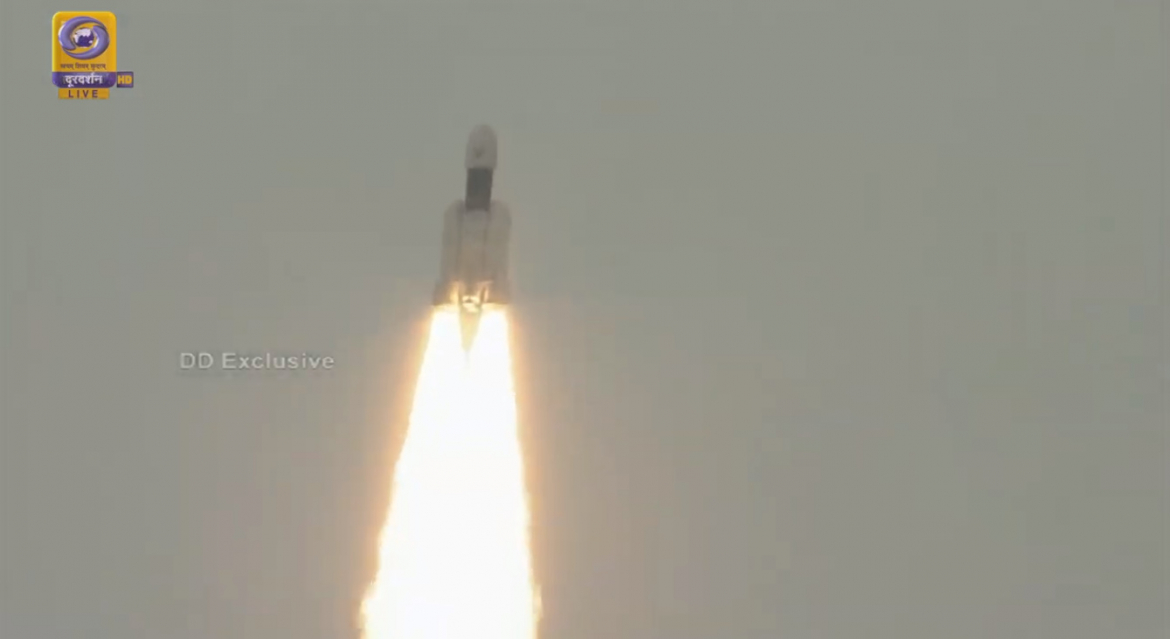 In a historic move, the Indian Space Research Organisation (ISRO) has launched the Chandrayaan-2 mission to the Moon – a group of three spacecraft that will orbit, land, and rove the lunar surface.

If the landing is successful, India will become only the fourth nation to soft land on the Moon, following the Soviet Union, the United States, and China.

History, launch, and 54-day flight to the Moon:

The fact that India’s first soft lunar landing mission’s launch will coincide within a day of the 50th anniversary of the Apollo 11 lunar landing is completely coincidental.

The mission was originally targeted to launch in 2011 as a joint Indian-Russian venture, with the Russian Federal Space Agency, Roscosmos, providing the lunar Lander while the Indian Space Research Organisation (ISRO) provided the Orbiter and the Rover.

Natural delays in design and build, as well as Roscosmos’ financial difficulties, delayed the mission to 2013.  Then, the November 2011 mission failure of the Phobos-Grunt Mars probe delayed construction of Russia’s Lander contribution and pushed the Chandrayaan-2 mission into 2015.

Continued financial fallout from the Phobos-Grunt mission failure as well as other financial problems plaguing Roscosmos eventually led the Russian agency to withdraw from the Chandrayaan-2 mission.

India then decided to do the mission by itself.  With that, the launch was pushed to March 2018 before incurring delays to April and October of that same year before moving into the “first half of 2019”.

Minor damage to two of the Lander’s legs during pre-flight testing in February 2019 further delayed the launch to 14 July.

After launch, Chandrayaan-2 will employ a slow outward spiral trajectory to the Moon, performing a series of burns to progressively raise its apogee – farthest point in orbit from the Earth – to eventually intercept the Moon 30 days after launch.

The historic flight will launch on the Geosynchronous Satellite Launch Vehicle Mark 3, or GSLV Mk-III for short, from the Second Pad at the Satish Dhawan Space Centre in India.

The stacked configuration of Chandrayaan-2 for launch and its outward journey to the Moon. The Rover is inside the Lander. (Credit: ISRO)

The most powerful rocket in ISRO’s arsenal, it was the prime candidate for the Chandrayaan-2 mission and will also be the vehicle to launch humans into space as part of the Indian Human Spaceflight Programme.

Immediately, ISRO will perform a series of powerups and checkouts of the Chandrayaan-2 Orbiter/Lander/Rover stack to confirm the health of the spacecraft before it begins a series of apogee raising maneuvers to increase its farthest distance from Earth during each orbit.

In other words, Chandrayaan-2 will gradually spiral its farthest point from Earth farther away from our planet via a series of orbit raising maneuvers performed at each orbital perigee – closest approach to Earth in an orbit – by the Chandrayaan-2 Orbiter’s main engine.

This orbital apogee raising process will now take 23 days (opposed to the original 17 days for a launch on 14 July), after which Chandrayaan-2 will be in the perfect position at orbital perigee to fire the Orbiter’s main engine again, this time performing the Trans-Lunar Injection (TLI) burn to send the spacecraft to the Moon.

The TLI burn will place Chandrayaan-2’s orbital apogee at lunar distance at a precise point so it will intercept the Moon 7 days later – 2 days longer than originally planned.

Upon lunar intercept 30 days after launch, Chandrayaan-2 will use the Orbiter’s main engine to perform the Lunar Orbit Insertion burn to shift its orbit from the Earth to the Moon.

The spacecraft stack will then spend the next 13 days (opposed to 28 days per the original timeline) firing the Orbiter’s main engine periodically to change the highly elliptical lunar capture orbit to a circular 100 x 100 km (62 x 62 mile) lunar orbit.

Once in its lunar science orbit, the Lander (with Rover inside) will separate from the Orbiter 43 days after launch (instead of 50 days).  The following day, the Lander will begin its 4-day descent to the lunar surface.

The Lander’s touch down on the southern polar region of the Moon is slated to occur 48 days after launch (opposed to 54 days per the original plan).

The components of Chandrayaan-2:

The Chandrayaan-2 mission is comprised of three primary components: an Orbiter, a Lander, and a Rover.

The Orbiter part of the mission is the only element that does not carry a specific name and is instead referred to solely as the Chandrayaan-2 Orbiter.

Serving as a science platform in its own right as well as a telecommunications relay between the Lander that will be deployed on the lunar surface, the Chandrayaan-2 Orbiter will communicate directly with the Indian Deep Space Network at Bayalalu. 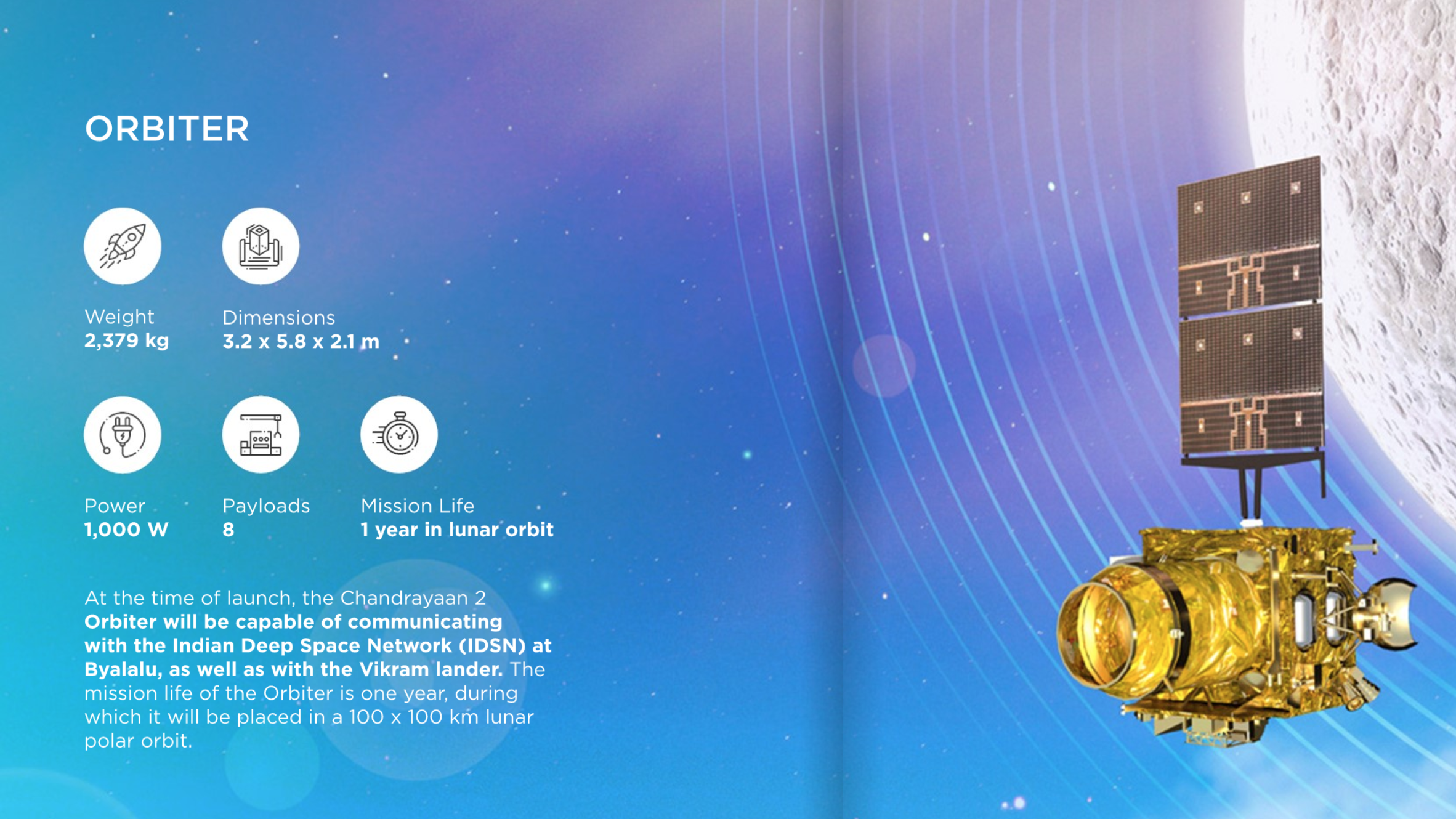 The first element of the mission to bear a name of its own, the Lander is called Vikram after Dr. Vikram A. Sarabhai, considered the Father of the Indian Space Programme.

The Lander is designed to function for a single lunar day, 14 Earth days, and is capable of communicating directly with the Indian Deep Space Network, the Chandrayaan-2 Orbiter, and the Rover on the lunar surface.

To aid with its landing, Vikram carries a high-resolution camera, a navigation camera, a hazard avoidance camera, an altimeter, a velocity meter, and the associated software to integrate these components.

Extensive testing was performed in rural parts of India to ensure the Lander’s systems could safely detect any hazards that go unnoticed via observations of the landing site by the high resolution camera on the Orbiter prior to landing.

Vikram is also designed to safely land on slopes of up to 12°.

The five 800 N engines will allow Vikram to slowly ease onto the lunar surface at a speed of just 2 meters per second (6.5 feet per second).

Vikram itself, in addition to serving as a communications relay between the Rover and the Orbiter/India, carries three scientific experiments of its own, including the Radio Anatomy of Moon Bound Hypersensitive ionosphere and Atmosphere instrument, the Chandra’s Surface Thermo-physical Experiment, and the Instrument for Lunar Seismic Activity experiment.

Vikram also carries, inside of it, the Rover that will be deployed to the lunar surface.

Following landing, a door on the side of Vikram will open and extend down to the lunar surface, providing a ramp for the Rover.

For launch, cruise to the Moon, and landing, the Rover will be attached to the door and then deployed down with it.

After the door is fully deployed, a solar panel on the Rover will be extended and the Rover activated before it rolls itself down onto the lunar surface.

The 27 kg (59.5 lb), six-wheeled Rover will be India’s first roving robotic explorer on another celestial body.

The Rover’s single, extendable solar panel will generate 50 W of electric energy for the vehicle.

It is only capable of communicating with the Vikram lander, and therefore all of its scientific and data results will have to be relayed through the Lander back to either the Orbiter or directly to Earth.

STS-93 at Twenty Years: “A very long eight and a half minutes”