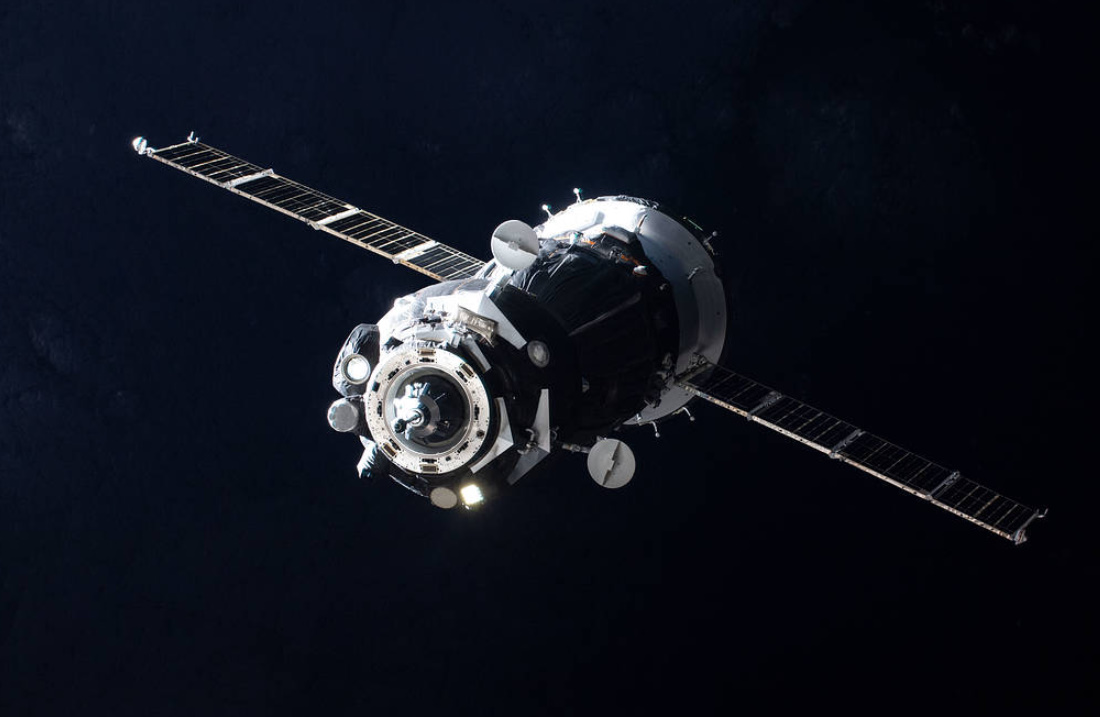 The mission marked the second to last flight of the Soyuz-FG rocket, which was designed to bridge the gap between the Soyuz-U and the Soyuz-2 rocket variants.

Soyuz-FG – getting ready for retirement:

In the mid-1990s, Roscosmos realized it would have to upgrade its Soyuz rocket to ensure continued competition in the global commercial market in the 21st century.

At the time, the space agency was utilizing the Soyuz-U, designed largely in the 1960s and having taken its first flight on 18 May 1973.

At the time, it was cutting edge, and the Soyuz-U would go on to set several records, including the highest launch rate per year with 47 flights in 1979 and a total career flight number of 786 missions by the time of its retirement in 2018.

But as technology improved and other rockets became more capable, the Soyuz-U began to show its age.

Its computer systems were analog, severely restricting the upgrades possible on the rocket.

Because of the analog Flight Control System, the rocket was incapable of rolling onto the correct azimuth after lifting off from its launch pads.  Therefore, the launch pads themselves had to literally be turned and angled in the correct direction so the rocket could simply pitch over and be on the correct course for its intended orbit.

Roscosmos knew they needed an upgraded version of the Soyuz for the 21st century, and designs began for what would eventually become the Soyuz-2 variant.

But concerns raised by the international partners of the International Space Station regarding the use of the brand new and still in planning Soyuz-2 for crew transportation to the Station coupled with financial concerns and development delays to the new digital Flight Control Systems for Soyuz-2 led Roscosmos to create a new Soyuz variant designed solely to bridge the gap between Soyuz-U and Soyuz-2 and demonstrate flight performance of some of the new systems and engines intended for Soyuz-2.

The bridge-gap variant became the Soyuz-FG rocket, which launched for the first time on 20 May 2001 from Site No. 1/5 at the Baikonur Cosmodrome in Kazakhstan. 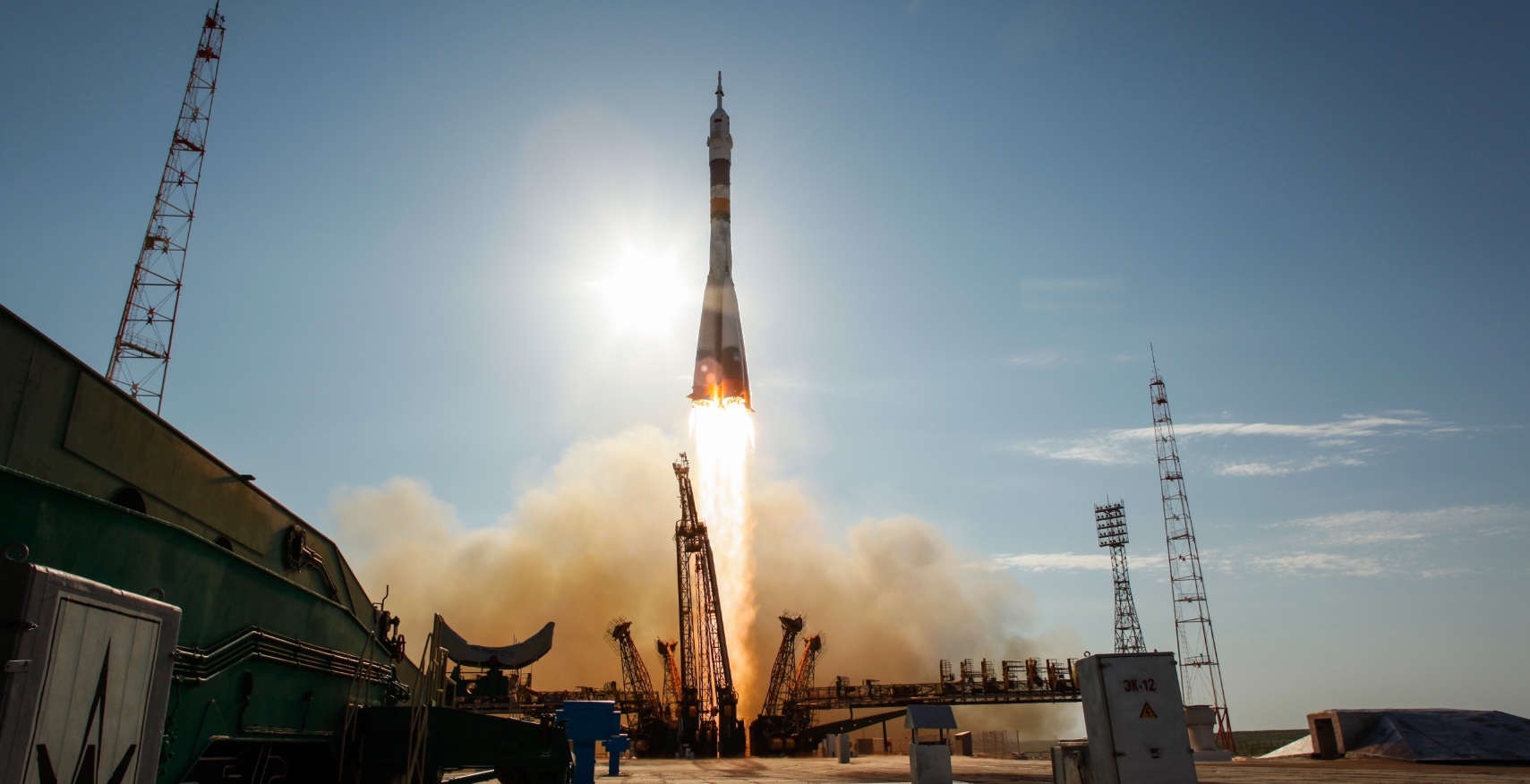 A Soyuz-FG rocket launches the Soyuz TMA-04M and crew in 2012. (Credit: NASA/Bill Ingalls

That mission successfully lofted the Progress M1-6 vehicle, a resupply craft, to the International Space Station.

While the new engines provided the same amount of thrust as the older engines used on the Soyuz-U, the engines included several new safety and performance upgrades that increased their safety and reliability.

The new Soyuz-FG continued to use the RD-0110 engine for its second stage, same as the Soyuz-U.

With the upgraded engines on its first stage and a host of other improvements over the Soyuz-U, the Soyuz-FG was designed largely for the purpose of taking over crew transportation duties of the Soyuz spacecraft to the International Space Station, a role it began to serve on 30 October 2002 with the launch of the new Soyuz TMA-1 spacecraft.

But despite its upgrades, it still carries an analog flight control system and isn’t capable of rolling onto course, meaning its launch pads still have to be rotated into the proper azimuth (alignment) prior to the vehicle lifting off.

The Soyuz rocket, mission managers, and members of the media are blessed by a Russian Orthodox Priest in advance of the Friday launch of @AstroDrewMorgan, @astro_luca, & Alexander Skvortsov to @Space_Station. 📸 – https://t.co/3KJZGOJ3Ix pic.twitter.com/9nZHqb9lC1

For this reason, Soyuz-FG was always an interim rocket that would eventually be replaced by the Soyuz-2.

Saturday’s launch was Soyuz-FG variant’s 69th and second-to-last mission.  Of the rocket’s 69 missions to date, 68 have been successful with only one failure – that of the Soyuz MS-10 launch in October 2018.

During that flight, a problem at booster separation resulted in the disintegration of the rocket.  The launch abort system on top of the Soyuz function perfectly, pulling the two crew members inside the Soyuz MS-10 spacecraft safely away from the failing rocket and returning them to Earth.

Those same two crewmembers boarded another Soyuz-FG rocket just six months later and successfully launched on a mission to the International Space Station.

After Saturday’s Soyuz MS-13 crew launch, the Soyuz-FG rocket has only one flight remaining, that of Soyuz MS-15 in September, when it will ferry three more people up to the International Space Station.

With that final September flight, the Soyuz-FG will bow out of operations with 70 missions to its credit.

Crew launch operations for the International Space Station will then be taken over by the Soyuz-2.1a variant, featuring digital flight control systems and additional safety improvements and upgrades.

Launching on the 50th anniversary of the Apollo 11 human lunar landing, the Soyuz MS-13 spacecraft is transporting three international crewmembers up to the Space Station, including Aleksandr Skvortsov of Roscosmos, Luca Parmitano of the European Space Agency (ESA), and Dr. Andrew R. Morgan of NASA. 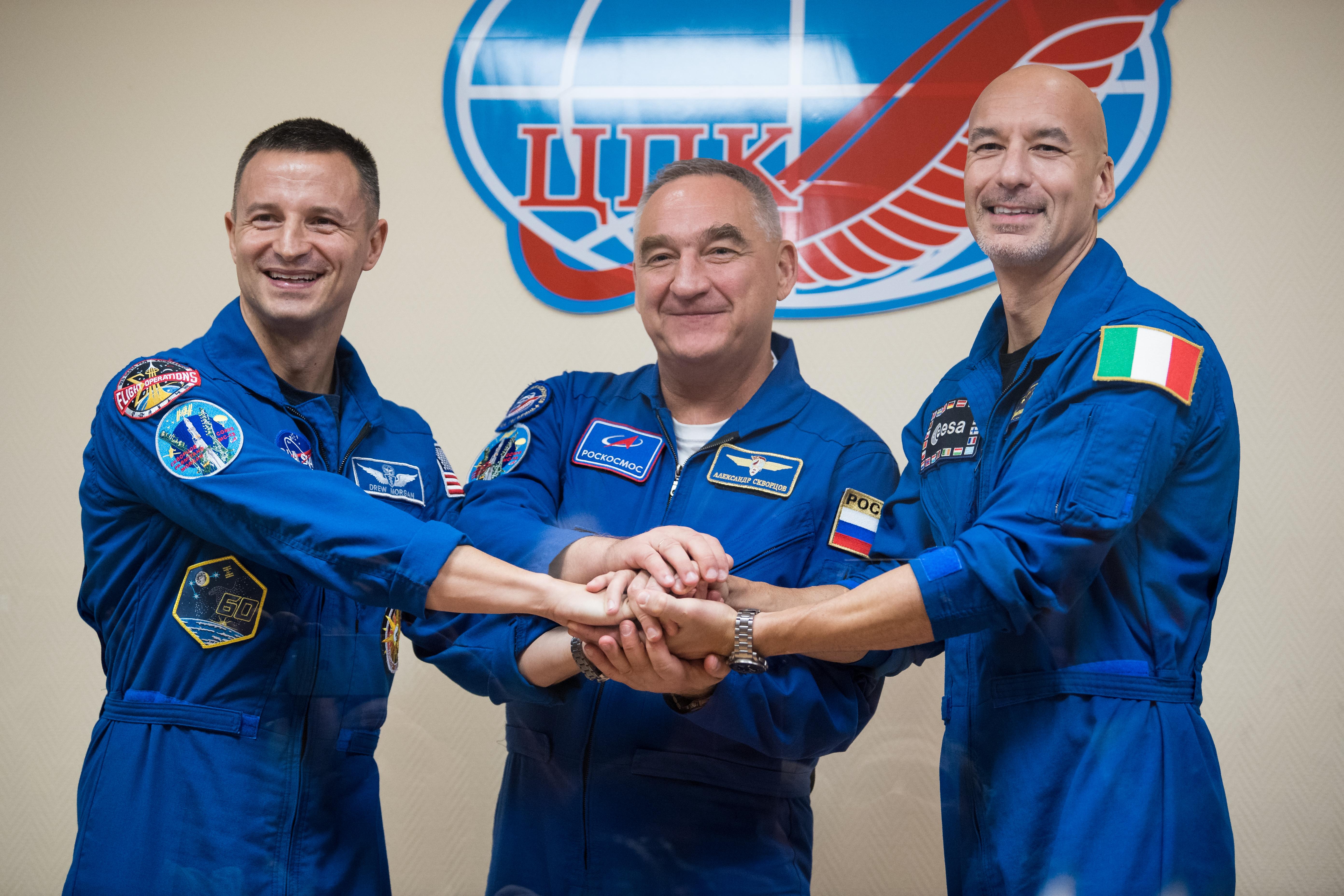 After launching from Site No. 1/5 at the Baikonur Cosmodrome in Kazakhstan, the same launch pad Yuri Gagarin used on the first human space flight in 1961, the crew performed a 4 orbit, 6.5 hour rendezvous and automated docking with the international outpost.

Given the single second launch window availability, the launch resulted in the crew being in space and on their way to the International Space Station 50 years to the minute after the Eagle lunar lander undocked from the Columbia Command Module of Apollo 11 and when the Eagle landed at Tranquility Base the Moon on 20 July 1969 at 20:17 UTC (16:17 EDT).

Aleksandr Skvortsov was born in Schelkovo, Moscow Oblast, Russian SFSR, Soviet Union, on 6 May 1966 to a Cosmonaut-trainee, who bears the same name.

While his father was forced to drop out of cosmonaut training in 1968 due to medical issues, Skvortsov gained a military education, graduating from the Stavropol Military Aviation School of Pilots and Navigators as a pilot engineer in 1987 and from the Military Red Banner Air Defense Academy in 1997.

In his military service, he achieved the rank of Colonel in the Russian Air Force.

Over the course of his military career, Skvortsov has flown the L-39, the MiG-23, and Su-27 aircraft as pilot, senior pilot, and chief of aircraft formation, has logged more than 1,000 hours of flight time, and is a Class 1 Air Force pilot, qualified diver, and a paraborne instructor.

Accepted as a cosmonaut trainee in 1997, he completed basic spaceflight training in November 1999, qualifying as a test cosmonaut for flights aboard the Soyuz and missions to the International Space Station.

After serving technical duties in the Cosmonaut and Astronaut offices, he was selected in March 2008 as the backup Flight Engineer for Expeditions 21 and 22 and as backup Soyuz Commander for that flight.

In accordance with traditional crew assignment practices, he was then assigned as the primary Flight Engineer for Expedition 23 and Commander of Expedition 24.

He launched on his first long-duration spaceflight as Commander of the Soyuz TMA-18 spacecraft on 2 April 2010.  While aboard the Station, he participated in the STS-131 and STS-132 missions of Space Shuttles Discovery and Atlantis, including the Atlantis mission that delivered the Russian Rassvet module to the ISS.

After returning to Earth and September 2010, Skvortsov quickly reentered mission-specific training and was assigned to Expeditions 39 and 40 to take place in 2014.

He launched on his second long-duration spaceflight on 25 March 2014 as Commander of Soyuz TMA-12M and remained on the Station for just under 6 months, returning to Earth on 11 September 2014.

Soyuz MS-13 will be his third long-duration trip to space, where he will serve as a Flight Engineer for Expeditions 60 and 61.

The youngest person to ever undertake a long-duration space mission, Luca Parmitano was born in Paternò, Sicily, on 27 September 1976 and was just 36 years and eight months old when he launched on his first mission in 2013. 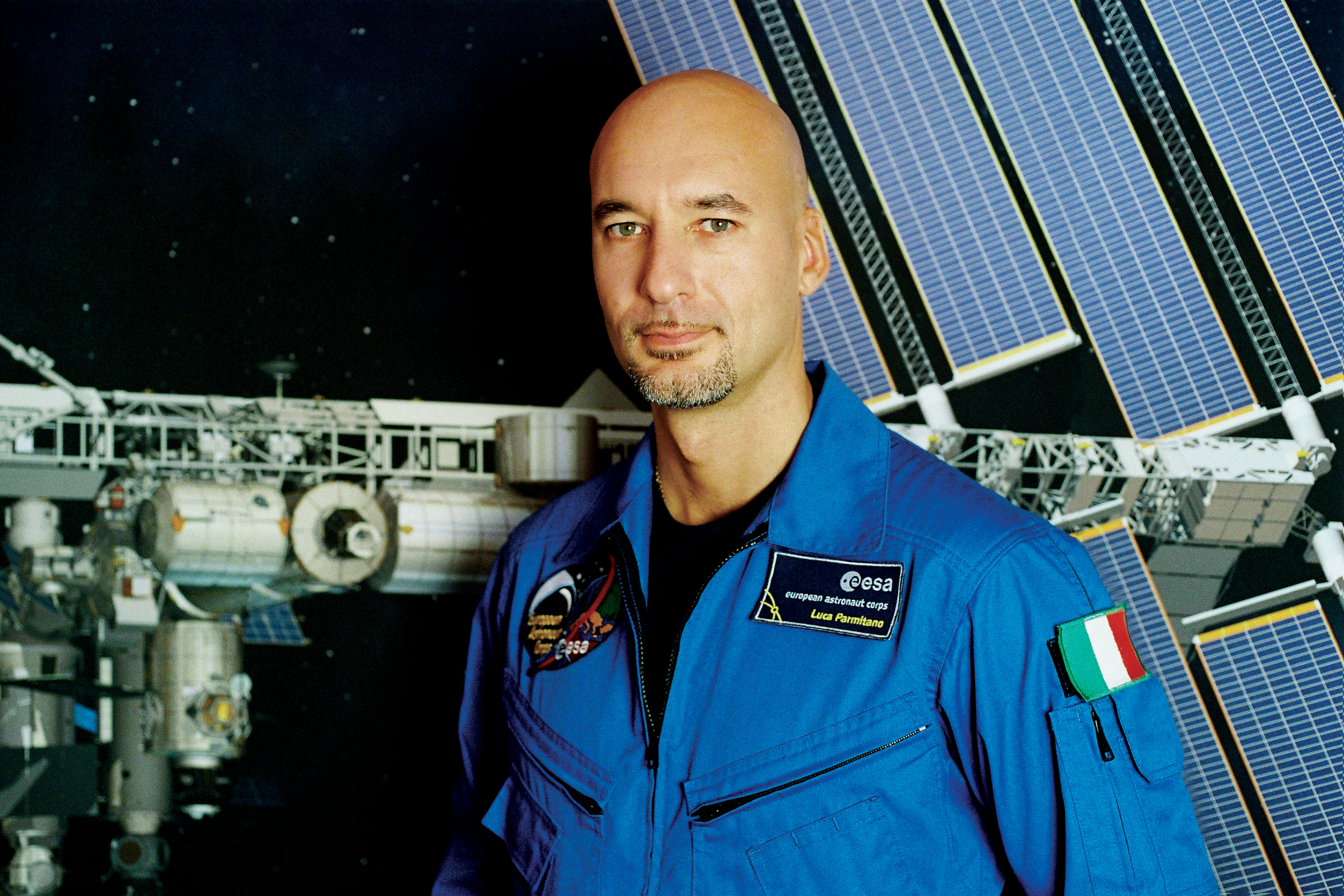 A pilot in the Italian Air Force, Parmitano graduated from the Liceo Scientifico Statale “Galileo Galilei” in Catania, Italy, in 1995 before going on to complete a Bachelor’s degree in political sciences focusing on international law from the University of Naples in 1999.

In 2000, he completed studies and training at the Italian Air Force Academy and moved on to basic flight training with the U.S. Air Force at the Euro-NATO Joint Jet Pilot Training facility at Sheppard Air Force Base, Texas.

In 2003, Parmitano earned a qualification as an Electronic Warfare Officer before completing the Tactical Leadership Programme in Belgium in 2005.

During all of this, he served as an AM-X aircraft pilot with the 13th group, 32nd Wing in Amendola, Italy, from 2001 to 2007, obtaining all aircraft qualifications including Combat Ready, day/night air to air refueling, Four Ship Leader and Mission Commander/Package Leader.

In 2007, the Italian Air Force selected Parmitano as a test pilot candidate, and he trained as an experimental test pilot at EPNER in Istres, France.

In 2008, he began a Master’s degree in experimental flight test engineering and also sent in an application to ESA to join their astronaut corps.

In May 2009, ESA accepted Parmitano as an astronaut candidate.  Two months later, he graduated with his Master’s degree in experimental flight test engineering from the Institute Superieure de l’Aeronautique et de l’Espace in Toulouse, France.

After completing astronaut candidate training in 2011, he was immediately assigned to the Expedition 36 and 37 long-duration missions aboard the International Space Station.

His first space mission was called Volare which means “to fly” in Italian.

Parmitano launched on 28 May 2013 aboard the Soyuz TMA-09M spacecraft, becoming the youngest person to ever undertake a long-duration mission in space.

During his first stay aboard the International Space Station, he became the first Italian to perform an Extra Vehicular Activity, or spacewalk, when he and NASA astronaut Chris Cassidy went outside the orbiting laboratory to install power cables, retrieve a material research sample experiment, and perform various maintenance tasks.

Part of those tasks were in preparation for the new Russian multipurpose module, Nauka, the long-planned replacement of the Pirs docking compartment in 2013.

Ironically, Parmitano will return to the International Space Station today while Russia continues to prepare the oft-delayed Nauka module for launch sometime next year at the earliest.

Later in that same Expedition, Parmitano went back outside the International Space Station for his second spacewalk, though that had to be terminated early due to water infiltration that began filling up his spacesuit. 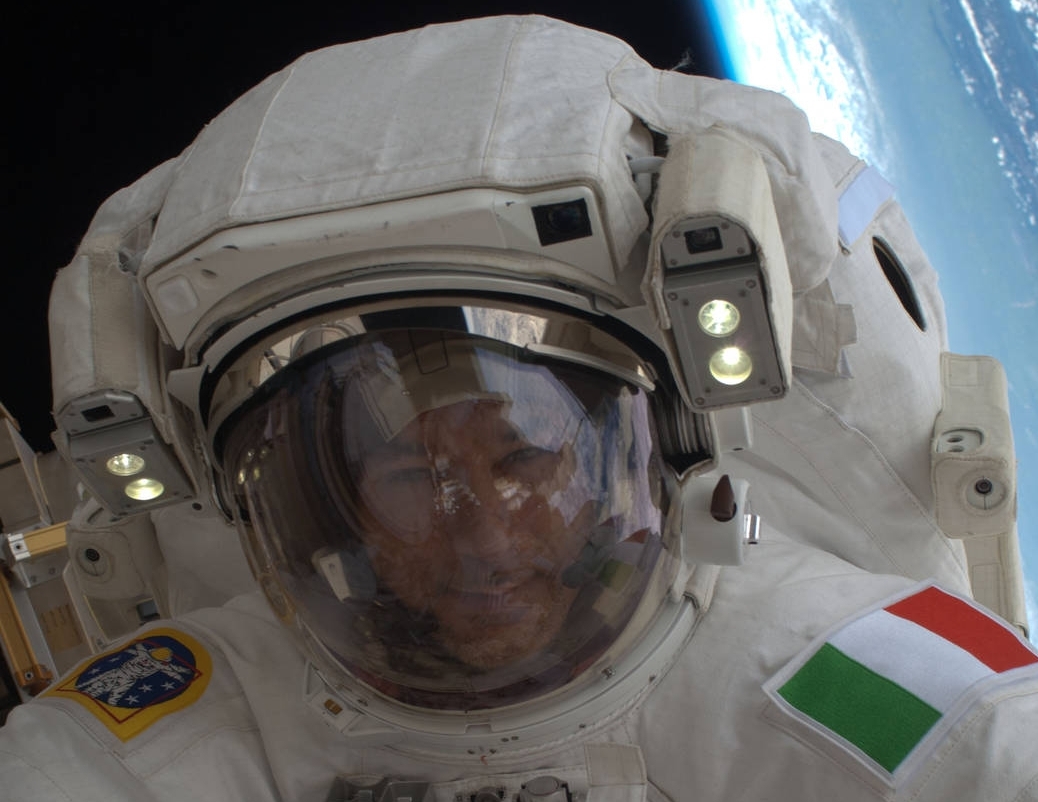 After a successful mission, Parmitano returned to Earth on 11 November 2013.

Afterward, he served as Commander of the NEEMO 20 undersea expedition for NASA off the southern coast of Florida in July 2015.

In May 2018, ESA announced Parmitano’s selection as a Flight Engineer for Expedition 60 and as Commander of the Expedition 61 mission to the International Space Station.

When he takes command of the Station later this year, Parmitano will become only the third European to command the international outpost and the first Italian to do so.

His new mission is called Beyond.

Born on 5 February 1976, Andrew Richard Morgan is an emergency physician with the U.S. Army with a subspecialty of primary care sports medicine.

A graduate of the U.S. Military Academy at West Point where he earned a Bachelor’s of Science in Environmental Engineering and the Uniformed Services University of the Health Sciences in Bethesda, Maryland, where he earned a Doctorate in Medicine, Dr. Morgan has served in elite special operations units worldwide for the U.S. Army.

Throughout his assignments with special operations forces, Dr. Morgan saw deployment in direct support of combat operations in Iraq, Afghanistan, and Africa.

Currently holding the rank of Colonel, Dr. Morgan served as a medical team member in the Joint Special Operations Command and worked as a part-time physician for the U.S. Army Parachute Team .

In June 2013, NASA selected him as one of eight members of the 21st NASA astronaut class, and by July 2015 he had completed astronaut candidate training and was assigned to the EVA/Robotics branch of the Crew Operations Branch at the Johnson Space Center in Houston, Texas.

Launching today on a planned 8 to 9 month mission, Dr. Morgan will remain on board the International Space Station for about three months longer than the typical NASA expedition crewmember, serving as a Flight Engineer for Expeditions 60, 61, and 62 before returning to Earth in Spring 2020 aboard Soyuz MS-15.