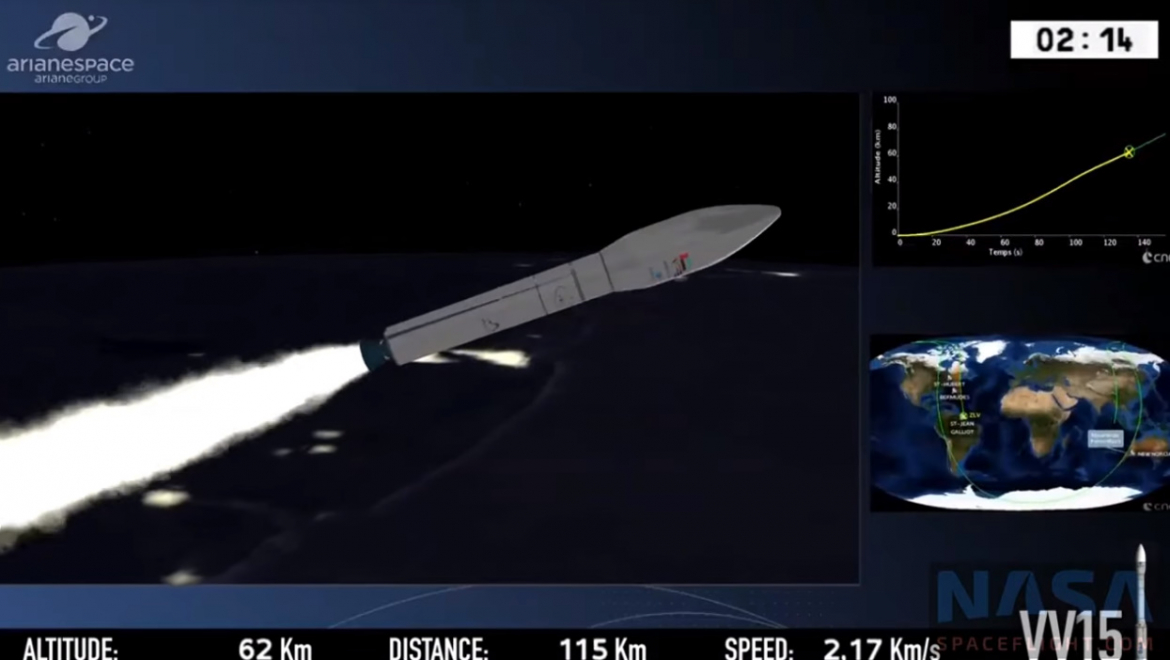 Arianespace’s Vega rocket failed during the launch of the Falcon Eye-1 spacecraft for the United Arab Emirates. The launch has been delayed by several days due to unacceptable upper-level winds. Tuesday’s attempt, however, launched without any weather concerns at the top of the window that opened at 01:53 (UTC) on Wednesday (10:53:03 local time on Tuesday) from the European Spaceport in French Guiana. However, the mission was lost at the point of second stage flight.

The immediate cause of the failure isn’t known. However, it appeared to relate to the Zefiro 23 second stage failing to ignite.

Live video of the launch showed stage separation, without any obvious view of the second stage coming to life. Soon after, the trajectory of the launch deviated from nominal.

After a short period, initially claiming it was a slight loss of telemetry data, Arianespace announced the mission was lost.

This was Arianespace’s sixth launch of the year, and the 15th Vega mission since this launcher began its career at the Guiana Space Center in 2012 Flight VV15 marks the 12th Earth observation mission for Vega, although the mission has had to wait several days until the unacceptable upper-level winds subsided.

Flight VV15 was performed from the Vega Launch Complex (ZLV). The pad was built on the site of the former Ensembele de Lancement Ariane 1 (ELA-1) launch pad which was used by twenty-five Ariane 1, 2 and 3 rockets between 1979 and 1986.

The spacecraft that was lost in the failure was an Earth observation satellite for the United Arab Emirates, developed by Airbus Defence and Space as prime contractor and Thales Alenia Space as co-prime.

FalconEye1 was to be the first of two spacecraft for the United Arab Emirates’ FalconEye satellite system.

The follow-on FalconEye2 spacecraft, also manufactured by the Airbus Defence and Space/Thales Alenia Space teaming, is scheduled to be orbited before the end of 2019 on a separate Vega mission. 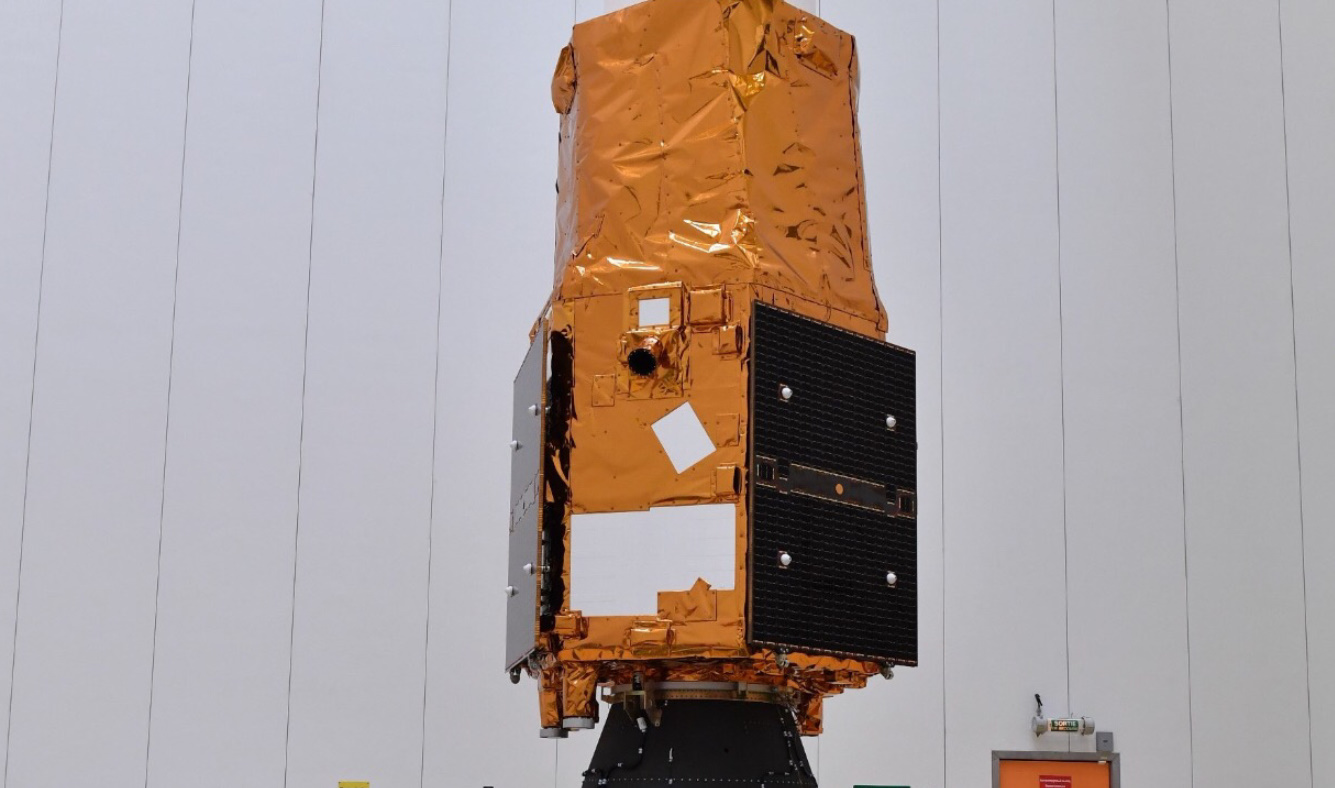 Falcon Eye-1 during processing – via Arianespace

The overall system is based on two identical satellites, FalconEye1 and FalconEye2, in Sun-synchronous orbit (SSO). Each satellite features an Earth observation payload, with very-high-resolution optical capabilities. It is equipped with a ground system for monitoring, receiving and processing the images. With the loss of the first spacecraft, the fate of the system will be in question.

The spacecraft weighed approximately 1,197 kg. at launch and was to be raised to a heliosynchronous orbit at 611 kilometers.

The countdown for Vega’s launch began nine hours and ten minutes before the rocket was due to lift off. As the clocks ticked towards zero the rocket’s systems – including the inertial reference system (IRS), multi-functional unit (MFU) and onboard computers were brought online and tested. 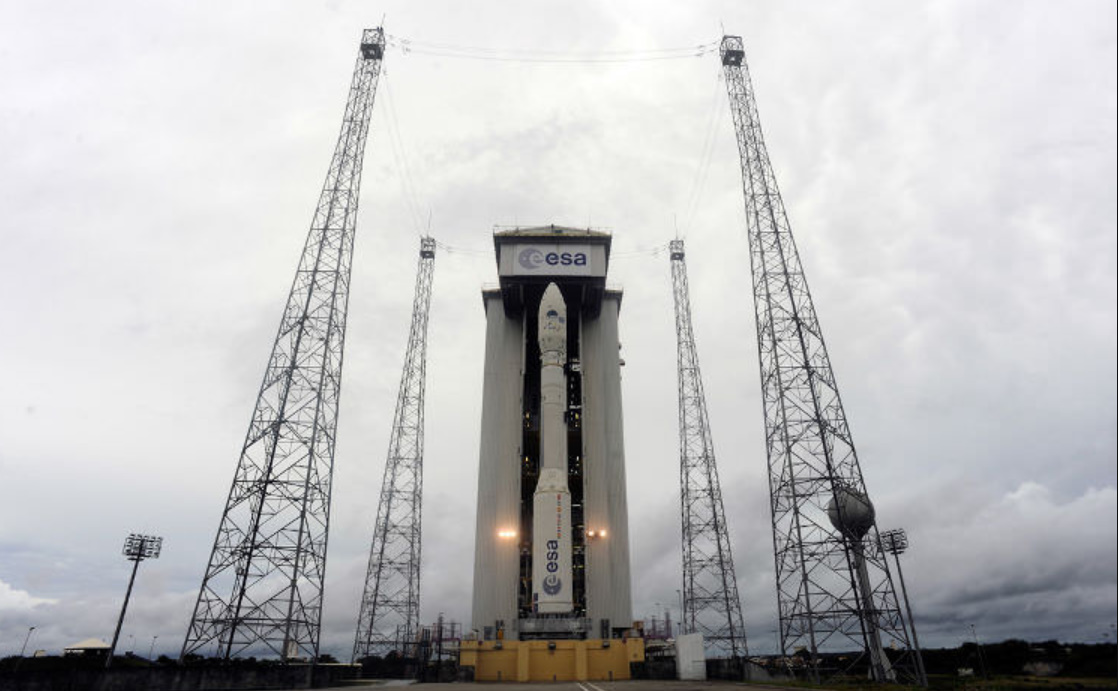 Vega ahead of launch – via Arianespace

Three hours and fifteen minutes before liftoff the mobile gantry used to assemble and access the rocket retracted away from the vehicle – a process that took about three quarters of an hour to complete. Once the gantry had reached its retracted position, the rocket’s inertial reference system were aligned, and its communications and telemetry systems activated.

The final four minutes of the countdown was the “synchronized sequence”, where computers control all operations. Once the countdown reaches zero, the P80 solid rocket motor powering Vega’s first stage ignites and the rocket lifted off.

The P80 burned for one minute and 54 seconds, propelling the rocket to a velocity of 1.78 kilometers per second (3,980 miles per hour) and an altitude of 53 kilometers (33 miles, 29 nautical miles). The first stage separated at burnout, with the second stage supposed to ignite its Zefiro 23 motor almost immediately for a one-minute, 43-second burn.

Had this gone to plan, ignition of the third stage Zefiro 9 motor comes around fourteen seconds after the second stage burns out and separated – with this stage firing for two minutes and 34 seconds before it also separated. About five seconds into the third stage burn,

Vega’s payload fairing separates from the nose of the rocket, exposing Falcon Eye-1 to space for the first time.

Vega’s fourth stage, Avum, uses liquid propellant and can be shut down and restarted in flight. It was to make three burns during this launch – two before spacecraft separation, with a third burn to deorbit itself after successfully deploying Falcon Eye-1. 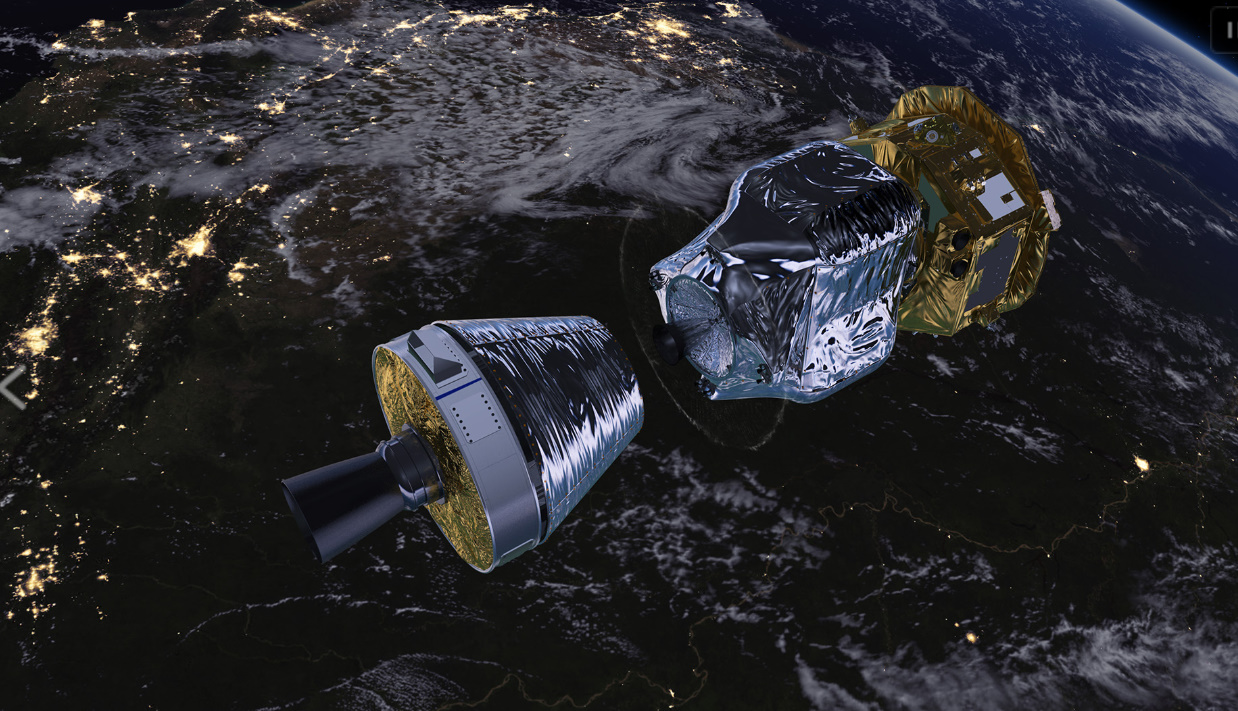 Avum is powered by a Ukrainian RD-843 engine, derived from engines that the Yuzhnoye Design Bureau and Yuzhmash production plant developed for the third stage of the Soviet Union’s R-36 family of intercontinental ballistic missiles.

The mission profile called for a 57 minute flight to the separation of the spacecraft. About fifty minutes after spacecraft separation, Avum was to make a third burn to deorbit itself, ensuring that no unnecessary debris was left in orbit from this mission.

This article will be updated if Arianespace provide insight into the failure.