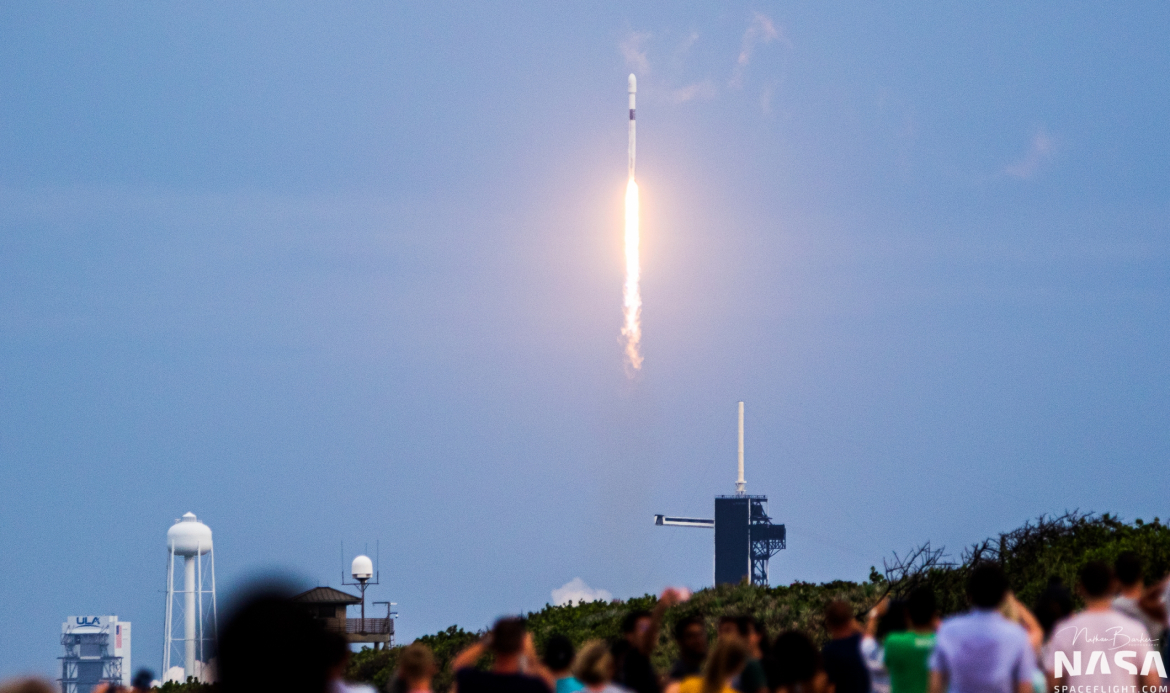 With all parties in agreement, the 45th Space Wing of the US Air Force and the Eastern Range in Florida are debuting their upgraded, rapid launch turnaround support, granting SpaceX approval to launch the AMOS-17 telecommunications satellite just 35 hours before United Launch Alliance lofts the AEHF-5 satellite on an Atlas V rocket from a neighboring launch pad.

Getting time on the Range:

AMOS-17 was originally targeting a launch on Saturday, 3 August; however, the need to perform a second static fire over the weekend pushed the mission to a No Earlier Than technical readiness date of Tuesday, 6 August.

Normally, that wouldn’t have been an issue, as SpaceX would simply have requested the new date on the Eastern Range – which is exactly what they did.

But this time, the request presented a need to perform extra work on behalf of the 45th Space Wing and the Eastern Range, as well as bring United Launch Alliance (ULA) into the fold as a launch for AMOS-17 on 6 August would come just less than 35 hours before the scheduled ULA launch of the Advanced Extremely High Frequency 5 (AEHF-5) satellite for the US Air Force.

#ICYMI: The #AMOS17 launch has been rescheduled for TOMORROW! A1C Willow Lane, Command Post Controller, is ready to go. Are you?

Be sure to join us tomorrow as we countdown to launch, window opening at 6:53 p.m.!

Back in 2017, then-Commander of the Eastern Range Brig. Gen. Monteith presented the Range’s new ability to support two Falcon 9 missions within 16 to 18 hours of each other and three launches off the Eastern Range within 36 hours (provided two of those launches were on SpaceX vehicles thanks to their Autonomous Flight Termination Systems).

However, last year when the Range had the opportunity to demonstrate this ability for the first time, they deferred and delayed a SpaceX mission which slipped a couple days from its original target date in favor of an Atlas V rocket for ULA that already had the Range.

At the time, no explanation was given as to why the Eastern Range did not wish to showcase a new ability they had been touting for a year.  Since then, the Range has continued to publicize their ability to rapidly turn around Range assets to support two different rockets from two different launch pads.

Now, just as in early 2018, a SpaceX mission has slipped a few days and requested the Range for launch just hours before an Atlas V.

The similarities of the 2018 occurrence and this week’s are striking, but the Range is now ready for such an occurrence – with the new 45th Range commander, Brig. Gen. Doug Schiess, providing context for the current decision.

Speaking to reporters during a pre-launch teleconference for AEHF-5, Brig. Gen. Schiess stated that the Range’s eventual goal is to get to a capability to launch two different rockets within 24 hours.

But ultimately, as the Brig. Gen. pointed out, it comes down to mission-specific requirements and timing.

In this case, from a timeline and safety perspective, there were no issues with having a Falcon 9 launch from SLC-40 while the Atlas V rocket with AEHF-5 sits out on its launch pad 2.4 km (1.5 miles) away at SLC-41.

Moreover, ULA and 45th Space Wing officials confirmed in the teleconference that there are no adverse effects on pre-flight processing for ULA and the Atlas V by the launch of a Falcon 9 from the neighboring pad.

This means ULA does not have to evacuate their pad or stop major operations while the Falcon 9 fuels and launches Tuesday evening.

Highlighting the good neighbor and Range sharing relationship between SpaceX and United Launch Alliance, ULA also agreed to roll the Atlas V rocket out one hour earlier than previously scheduled at 09:00 EDT (13:00 UTC) on Tuesday to allow their teams extra time to complete critical support work to free up range assets for the Falcon 9 later that evening.

This debut of the Eastern Range’s ability to perform a rapid asset turn around to support two different rockets within a very short period of time will be crucial to Range operations going forward.

Eastern Range officials state they are ready to support up to 48 launches per year from Florida.

However, a recent Environmental Assessment from SpaceX for their Starship/Superheavy rockets indicate that the Cape might be far busier than the Eastern Range anticipates.

Moreover, they are planning up to 24 Starship/Superheavy launches from 39A per year on top of the Falcon family flight rate.

The AMOS-17 telecommunications satellite will provide broadband communication services for the continent of Africa as well as the Middle East and portions of Europe.

The satellite will operate from the 17° East Geostationary location and will offer communication services in the Ka-, Ku-, and C- bands.

With a life expectancy of approximately 15 years, AMOS-17 was delivered into its preliminary Geostationary Transfer Orbit by an expendable Falcon 9 rocket.

To insert AMOS-17 into its needed GTO trajectory, all of the Falcon 9’s first stage performance was required, resulting in what has become a rare expendable flight for the SpaceX launcher. 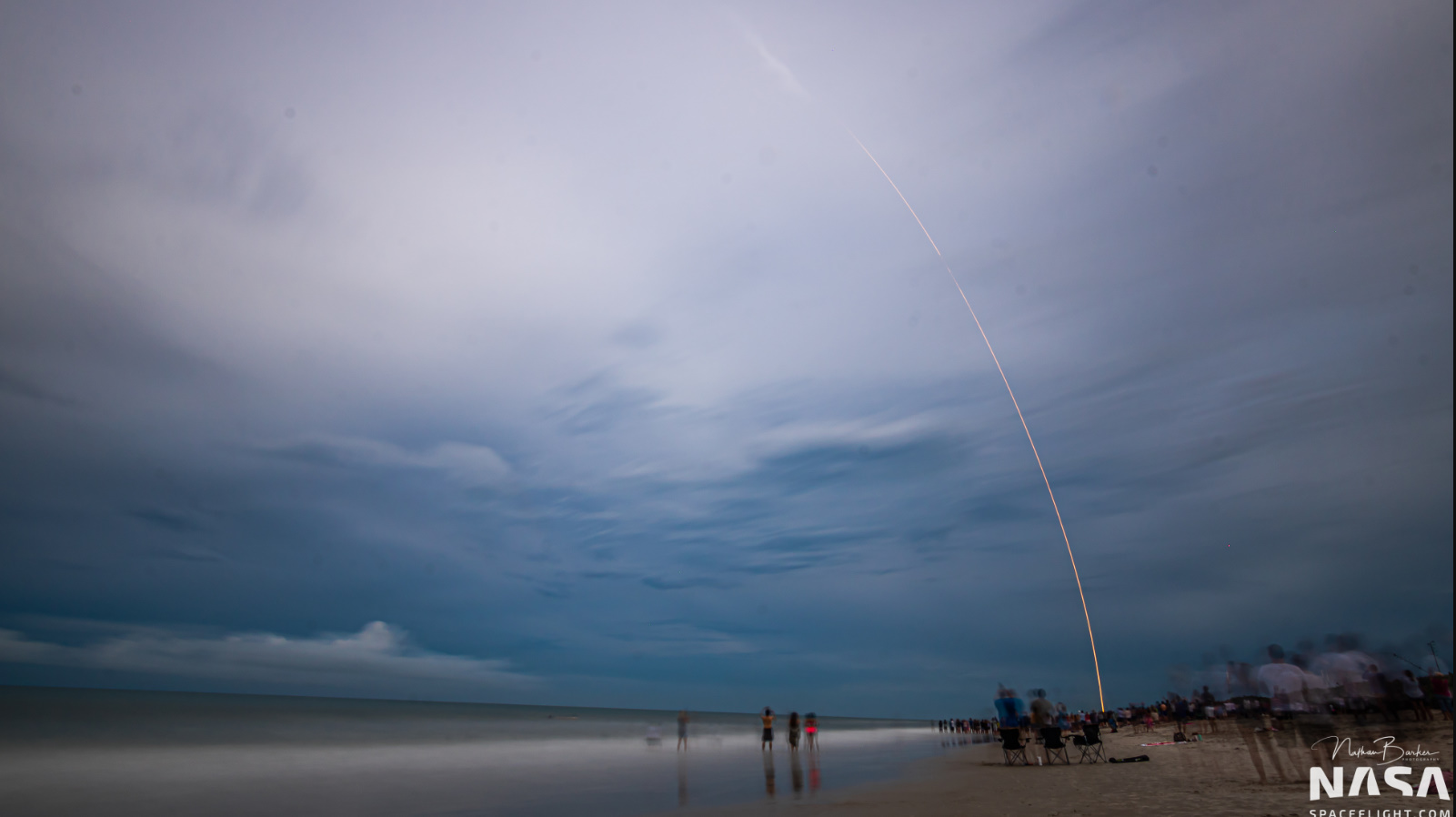 After firing for 2 minutes 45 seconds, Falcon 9 first stage B1047.3 shut down its engines and performed a destructive union with the Atlantic Ocean.

At the same time, SpaceX’s fleet of recovery ships were set to attempt to catch one half of the payload fairing on board the fairing catcher ship GO Ms. Tree while the other recovery vessel aims to fish the second fairing half out of the Atlantic for refurbishment and reuse. Elon Musk confirmed another successful fairing catch.

Meanwhile, the Falcon 9 second stage continued on to an initial parking orbit, where it performed a brief coast before reigniting its Merlin Vac engine to place itself and the AMOS-17 satellite into the correct GTO trajectory.

After spacecraft separation, AMOS-17 will use its chemical propulsion thrusters to rapidly raise its orbit over the course of the following 1-2 weeks until it arrives on station at the 17° East Geostationary location.

After that quick orbit-raising maneuver, ground teams will spend the following 3-4 weeks activating all of the satellite’s systems and performing various checkouts before declaring the satellite operational.

AMOS-17 is built on a 702 heritage satellite bus and marks the first satellite Boeing has built for Israel-based Spacecom.

Additionally, it is also the first Boeing satellite to employ 3D printed antennas.

AMOS-17 also carries the most advanced digital channelizer to ever fly on a satellite, which David Pollack, President and CEO of Spacecom said, “offers unique, effective utilization.”

Moreover, Mr. Pollack, related that the overall cost of the satellite at $250 million USD is expected to be recovered within the first six to seven years of operation, which he cites as normal for this type of telecommunications satellite.

Thus, profit from AMOS-17 will begin after that 6 to 7 year period, which is where the longevity of the satellite becomes quite important for Spacecom.

And the future does look promising for AMOS-17, with Mr. Pollack noting that “the market has received AMOS-17 well.  There are a few pre-launch contracts, not a lot. But we weren’t expecting many pre-launch because of AMOS-6.”

While AMOS-17 is often touted as the replacement satellite for AMOS-6, Mr. Pollack noted that it wouldn’t be entirely correct to classify the satellite as such.

AMOS-17 was not yet on the development board, according to Mr. Pollock, when the AMOS-6 satellite was lost in a launch pad conflagration of a Falcon 9 on 1 September 2016.

To that end, AMOS-17 is its own design and its own build based on updated analyses of what the market would need from the satellite once launched.

When asked at a media roundtable during a series of pre-launch interviews about the reason Spacecom returned to SpaceX for the launch of AMOS-17, Mr. Pollack noted that “AMOS-6 was unfortunate for us, but SpaceX’s track record speaks for itself.  We are friends working together. SpaceX is doing a great job. At the end of the day, they will launch us safely.”