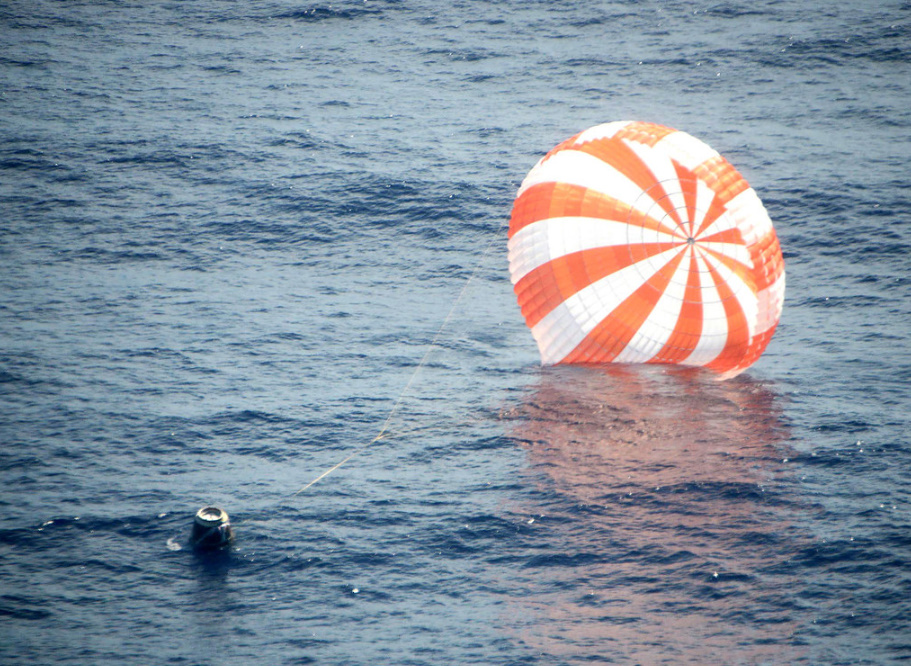 SpaceX’s CRS-18 Dragon spacecraft has concluded her EOM (End Of Mission) milestones, following unberthing from the International Space Station (ISS) on Tuesday. Dragon’s release from the Space Station Remote Manipulator System (SSRMS) occurred at 14:59 UTC, with splashdown in the Pacific Ocean around 20:20 UTC.

The CRS-18 Dragon was launched on Falcon 9 B1056.2 last month.  This was the same booster that had also launched the CRS-17 Dragon.

Once again, the booster made a successful return and will be prepared for a future launch.

Number 44 on the recovery count.

Still not getting old. Still spectacular. Still remember "industry" people telling me it would be "impossible without massive payload upmass penalties". pic.twitter.com/07Dr24NFwk

Dragon delivered over 2,500kg of cargo in her pressurized, including food and consumables for the ISS crew and several major scientific investigations set to be carried out in the space station’s microgravity environment.

One of the largest pieces of equipment is the third International Docking Adapter (IDA-3), which was lofted in the Dragon’s unpressurized “trunk” and removed during docked ops.

This was recently installed to Pressurized Mating Adapter-3 on the space-facing side of the station’s Harmony module during EVA-55.

Ahead of the return trip, Dragon was packed with downmass and the hatch closed. Dragon will be returning almost 2,700 pounds of scientific experiments and other cargo as downmass, including some numerous samples.

Robotic ground controllers then used the robotic arm to detach Dragon from the Earth-facing port of the Harmony module to maneuver Dragon into the release position.

Dragon was unberthed by the Space Station Remote Manipulator System (SSRMS) before being released from the robotic arm at 14:59 UTC. This was slightly later than planned due to the requirement to gain better lighting conditions.

Once the LEE snares were released, the SSRMS was backed away from Dragon as the craft held its position at the 10-meter mark.

SpaceX flight controllers at Hawthorne, California commanded Dragon’s Draco thrusters to fire for 12 minutes and 53 seconds – retrograde – in the deorbit burn. This enabled Dragon to slip out of orbit for its descent back to Earth.

PICA-X is robust enough to protect Dragon not only during ISS return missions but also during high-velocity returns from Lunar and Martian destinations. There were also signs of some experimental tiles on the Dragon that are understood to be related to SpaceX’s Starship test program.

Fast recovery vessels deploy, collecting Dragon’s parachutes as the recovery of the capsule itself is conducted by the primary recovery assets.