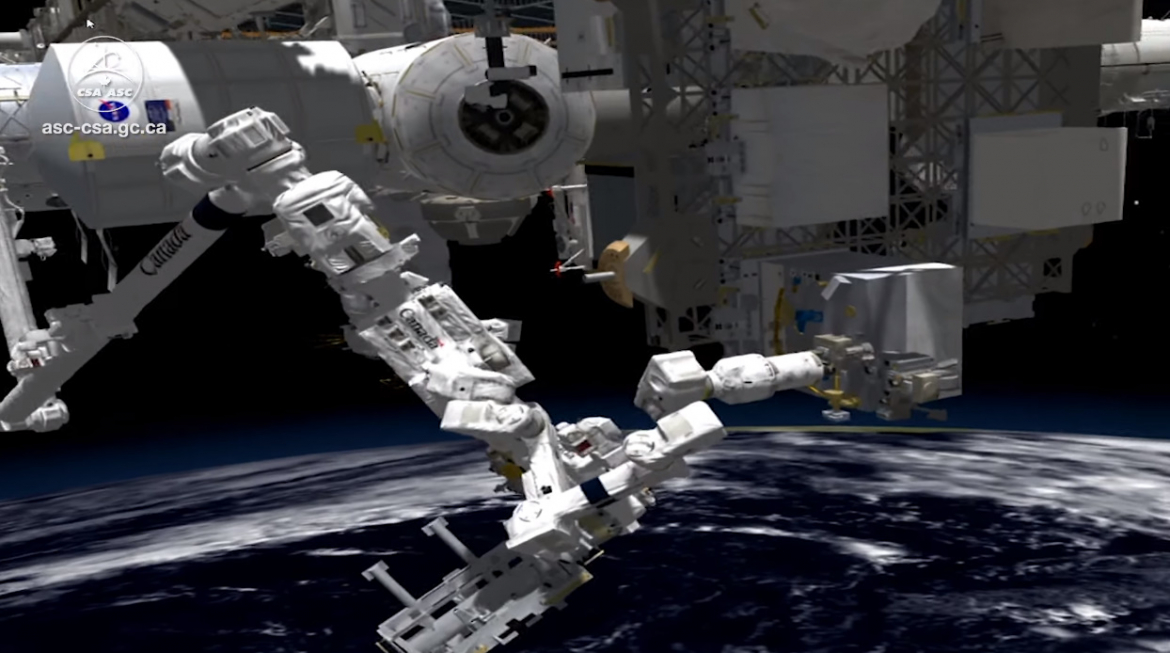 RRM is an ISS payload developed by the Satellite Servicing Capabilities Office (SSCO) at NASA’s Goddard Space Flight Center (GSFC) – the same team that managed the highly intricate Hubble Space Telescope (HST) Servicing Missions via the Space Shuttle. It is designed to test procedures for refueling satellites in space, among other objectives.

The RRM1 launched on STS-135 back in July 2011 and Dextre showed off its skills by using an array of tools to conduct objectives that are set to be employed on future missions. This first series of tests were completed early in 2013 and deemed to be a success, paving the way for RRM2 in 2015.

RRM3 – launched on a SpaceX Dragon during CRS-16 – builds on those early phases of ISS technology demonstrations that tested tools, technologies, and techniques to refuel and repair satellites in orbit.

Most satellite lifespans are based on the onboard propellant – or consumables – required for stationkeeping. Once they run out of fuel, they can lose their required position in space and become useless to the customer. Coolant for the thermal conditioning of onboard hardware is also a limiting consumable.

At present, there is no ability to replenish such consumables. RRM is aiming to change that paradigm.

RRM3 builds on the first two phases of technology demonstrations that tested tools, technologies, and techniques to refuel and repair satellites in orbit. RRM3 extended these demonstrations to include technologies needed to store and transfer super-cold cryogenic fluids.

We just finished #RRM3 ops and it was awesome and I’m so excited and even though I’ve been awake all night I’m not tired because it was just the best thing ever! This is one of the hardest things we do and it just feels so good to have been a part of it! #SPACEROBOTS 🤖🚀 pic.twitter.com/YVy6BzWFUm

RRM3 will also had secondary tasks, such as the demonstration and validation of the Compact Thermal Imager. The CTI is an instrument that utilizes available room on RRM3 to observe Earth to detect smoke and fires, as well as measure crop transevaporation.

There was also “Complete Machine Vision Tasks” listed under the secondary objections, which is an in-space assessment of fiducials (decals) with unique patterns that enhance machine vision algorithms and aid in autonomous rendezvous and tool positioning.

Previous RRM tests have tasked numerous tools to be used on the end of one of Dextre’s arms. For RRM3, these second-generation tools were designed based on operational lessons learned from RRM Phase 1 and 2, and unique RRM3 mission requirements. 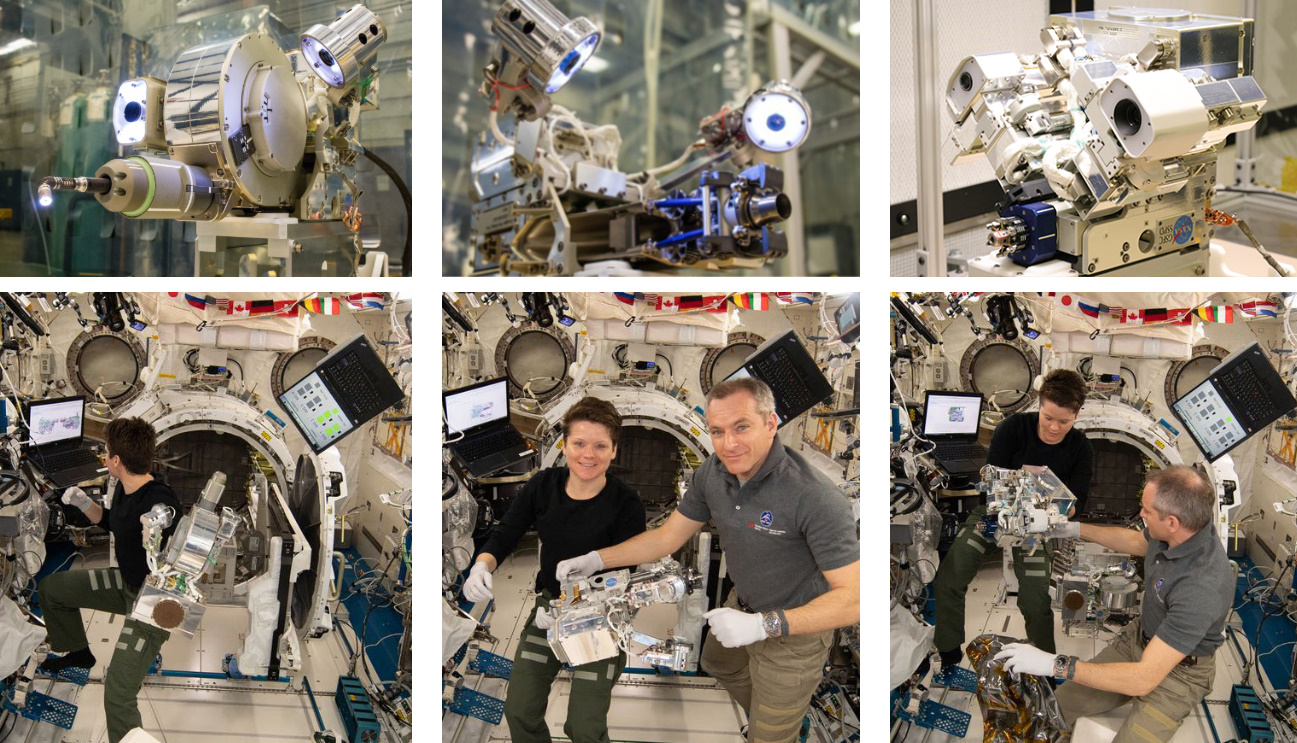 The RRM3 Tools – via CSA

The three tools are listed as the Visual Inspection Poseable Invertebrate Robot 2 (VIPIR2) – a robotic inspection camera used to visually verify entry and positioning of the Cryogen (flexible line) Transfer Hose (CTH) into the receiver tank. Cryogenic Servicing Tool (CST) – a robotic tool with adjustable rollers used to grab a flexible cryogen transfer hose and install it into a fuel port.

The operations were controlled from the ground, with RRM3 robotic operations focusing on the final step of connecting, sealing and managing the hoses needed to enable cryogenic fuel transfer on-orbit.

Since launch in December 2018, RRM3 demonstrated the first-ever long-term storage of cryogenic fluid with zero boil off, having successfully stored cryogenic fluid for four months on station prior to the April venting operation.

While the commercial applications for extending the life of expensive spacecraft that are running out of consumables is obvious, the Canadian Space Agency (CSA) also cited the technology’s use for deep space exploration. 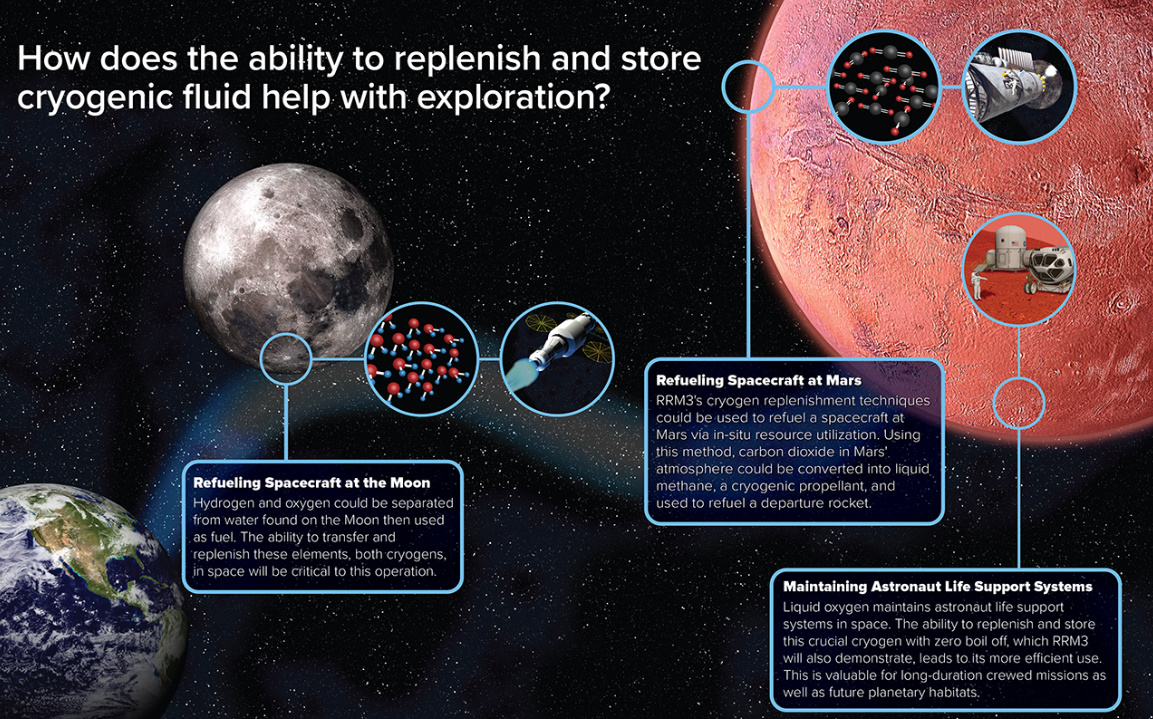 This included the demonstration of zero boil off for the storage of consumables.

RRM3 successfully stored liquid methane for four months with zero boil off, demonstrating a system which will dramatically lower fluid loss and eliminate the need for oversized tanks and extra propellant.