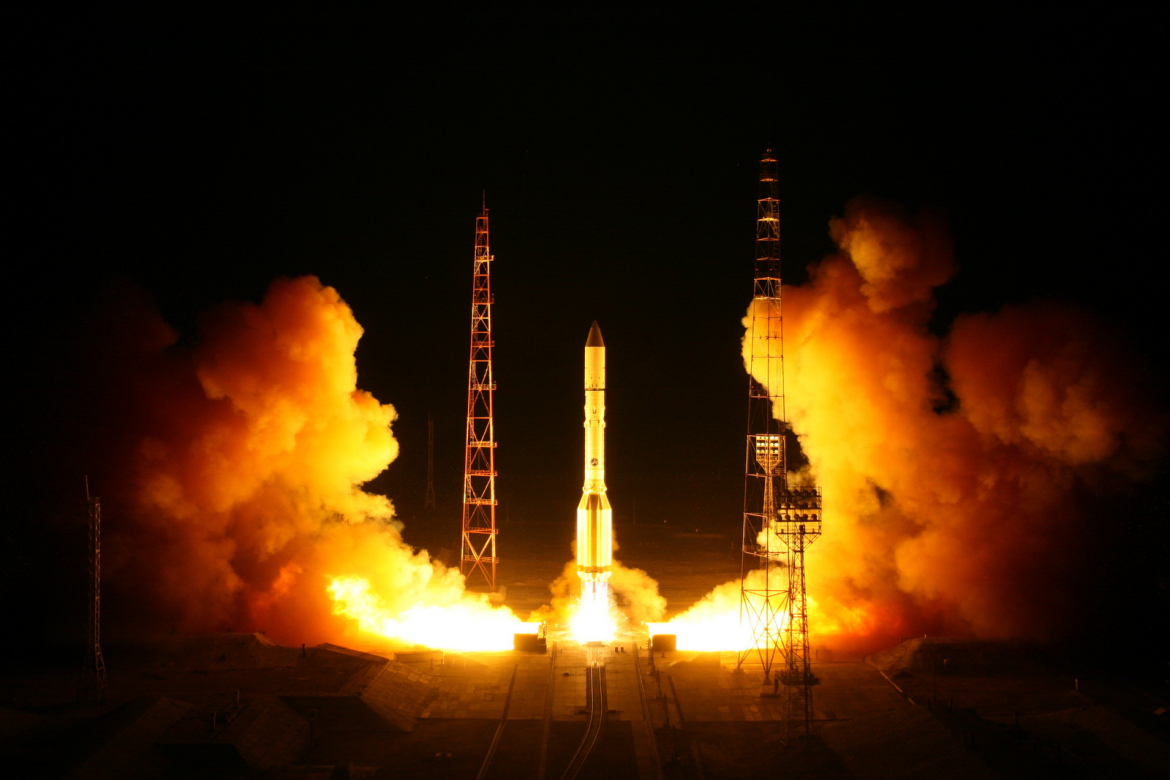 Russia launched its fourth Blagovest communications satellite via a Proton rocket Tuesday. Having lifted off from the Baikonur Cosmodrome at 02:56 local time (00:56 Moscow Time, 21:56 UTC on Monday), Proton’s Briz-M upper stage carried out a nine-hour multiple-burn mission that deployed its payload into geostationary orbit.

Blagovest is a series of military communications satellites operated by the Russian Ministry of Defence. Named after a bell peal used in the Russian Orthodox Church, the satellites’ translates to English literally as “Good News”. Blagovest provides dedicated Ka- and Q-band links between Russian military bases, although the Russian government has previously stated that the spacecraft are also equipped for civilian communications.

Tuesday’s launch carried Blagovest No.14L, the last of four satellites that make up the initial Blagovest constellation. It joins three other spacecraft in geostationary orbit which were deployed in August 2017, April 2018 and December 2018. All four satellites were constructed by ISS Reshetnev, the former Soviet-era NPO PM design bureau that was founded by Mikhail Reshetnev.

Based around an Ekspress-2000 platform, which has also been used for Ekspress and Yamal communications satellites, each Blagovest has an expected lifespan of at least fifteen years. Also designated 11F149, the Blagovest satellite has a mass of 3,227 kilograms (7,114 lb).

Now that it is in orbit, Blagovest No.14L will receive a designation under the Kosmos series, which Russia assigns to all of its military satellites. Kosmos was first used by the Soviet Union in 1962 as a generic name for any satellites that it did not want to identify as part of a specific program or series.

This initially included prototypes – such as early uncrewed tests of the Voskhod and Soyuz spacecraft – and interplanetary probes that had failed to leave Earth orbit as well as satellites with military applications. Today it is only used for military satellites. Blagovest No.14L is expected to become Kosmos 2539. 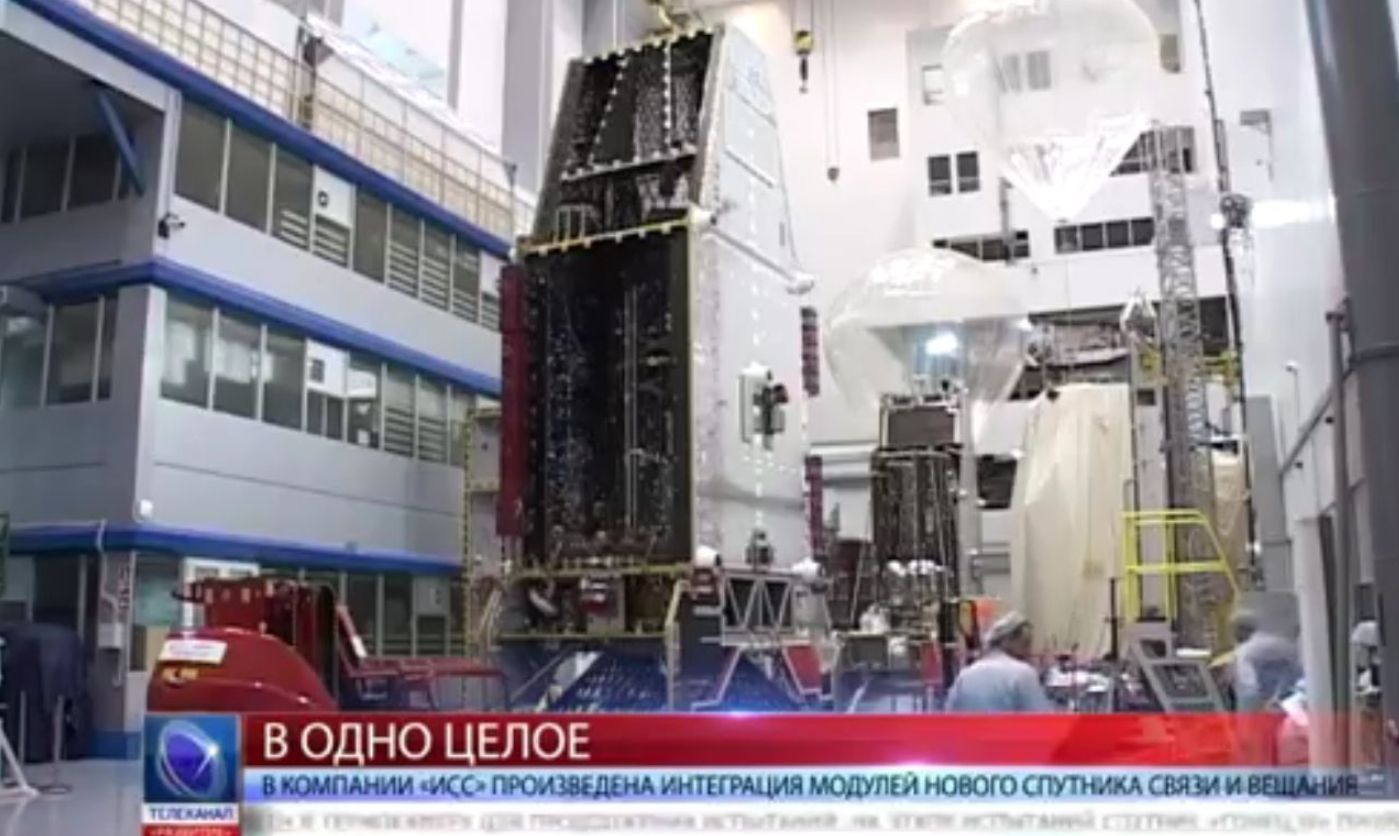 Like the previous three Blagovest satellites, Blagovest No.14L rode to orbit atop a Proton-M/Briz-M rocket. This consists of a three-stage Proton-M booster with an additional Briz-M upper stage. Proton carried Briz-M – with Blagovest attached – into space on a suborbital trajectory, before Briz began the series of burns that will raise it to geostationary orbit.

Proton traces its development back to Vladimir Chelomei’s UR-500 design, part of his Universalnaya Raketa – Universal Rocket – concept, a series of rockets that would satisfy all of the USSR’s requirements from ballistic missiles up to heavy-lift interplanetary launches.

UR-500 was conceived as a two-stage super-heavy intercontinental ballistic missile (ICBM), with the earliest designs based around clustering several smaller UR-200 rockets together. When this proved impractical the design was amended to use a central oxidizer tank with six propellant tanks strapped to its sides, which would give the rocket sufficient performance while keeping it small enough to be transported by rail if the propellant tanks were removed and reinstalled at the launch site.

While UR-500 proved too large to be useful as a missile, and the original two-stage design was retired after four test flights, Chelomei was allowed to continue work on his three-stage UR-500K. This stretched the rocket’s second stage and added a new third-stage, allowing it to place far heavier payloads into orbit than other rockets than in service like the Voskhod.

UR-500K, later named Proton-K, was also seen as a way to beat the United States to the Moon, via circumlunar flights with a heavily modified Soyuz spacecraft, if a landing could not be attempted ahead of the Americans. Ultimately delays and concerns about safety and reliability meant that even this could not be ready before Apollo 11 landed in July 1969, and circumlunar missions were subsequently canceled.

Proton-K first flew in March 1967, but thirteen of its first twenty launches failed, including eight out of ten attempts in 1969. After a suborbital test flight was conducted in 1970 the rocket’s reliability improved and it served the Soviet Union and Russia well over the next four decades, carrying planetary probes, communications satellites and space stations into orbit until its retirement in 2012.

In the 1990s Proton was at the forefront of the commercialization of Russia’s space industry. The Russo-American International Launch Services (ILS) was set up to market Proton for commercial launches, and Proton became a workhorse for the world’s communications satellite providers.

Proton-K was replaced by Proton-M, an upgraded and modernized version of the design that first flew in 2001. Initially used for commercial launches, Proton-M was phased through the 2000s before ultimately supplanting its predecessor. Proton-M has itself undergone a series of incremental “phase” upgrades, with material changes and engine upgrades among the modifications that have enabled its payload capacity to grow further. The latest version, Phase IV, was introduced in 2016, however, government launches typically use older versions of the rocket.

Proton-M number 93564, a Phase III vehicle, was used for Tuesday’s launch. The Briz-M has serial number 99566. All four stages of the rocket consume storable propellants – unsymmetrical dimethylhydrazine and dinitrogen tetroxide – and were manufactured by the Khrunichev State Research and Production Space Centre.

Tuesday’s launch began with ignition of Proton’s six RD-276 main engines, followed by liftoff as the rocket roared into the sky above Kazakhstan’s Baikonur Cosmodrome. Baikonur is the only launch site equipped for the Proton rocket. It once had four Proton launch pads, although only two of these remain in use and Pad 81/24, from which Tuesday’s launch took place, is also expected to be retired in the next year.

Proton’s first stage burned for just under two minutes. Seconds before it burned out the second stage ignited its four engines and separated. This “fire-in-the-hole” separation technique is normal for Proton: igniting the second stage while the first is still attached and burning, keeps propellant settled in the second stage tanks without the need for additional ullage motors. A lattice interstage between the first and second stages allows exhaust gases to escape before stage separation.

The second stage was powered by three RD-0210 engines and a single RD-0211. These are essentially identical, however, the RD-0211 incorporates additional hardware so it can be used to maintain pressure in the stage’s propellant tanks. These engines burned for three and a half minutes, after which the second and third stages separated, and the third stage ignited.

Powered by an RD-0212 assembly – consisting of an RD-0213 main engine and an RD-0214 vernier with four combustion chambers for attitude control – Proton’s third stage fired for around four minutes and fifteen seconds. About twenty seconds into the burn the payload fairing separated from the top of the vehicle, exposing Blagovest No.14L to space for the first time.

Briz-M separated from Proton shortly after third stage shutdown, beginning the first, four-minute firing of its S5.98 engine about ninety seconds later to inject itself and Blagovest into an initial parking orbit. Three further burns occurred over the next nine hours. The first of these raised the orbit’s apogee, or the highest point, to an intermediate altitude. 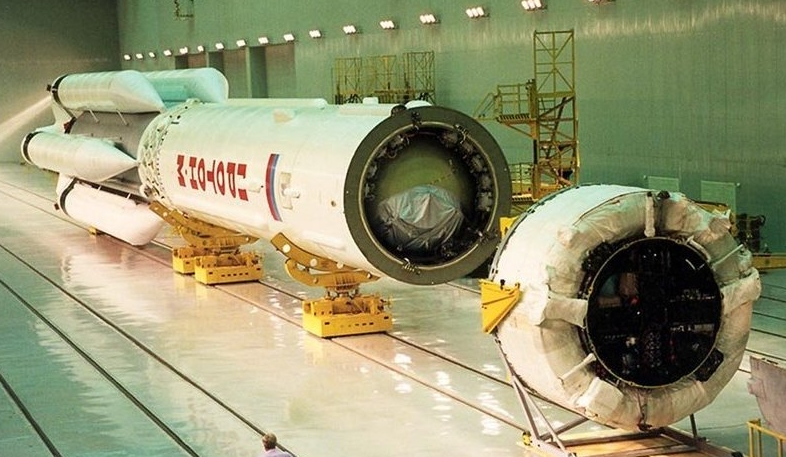 Another burn raised the apogee further, establishing a geosynchronous transfer orbit. While coasting in this orbit Briz-M jettisoned its external propellant tank, which wraps around the outside of the stage. Its final burn circularized the orbit, raising its perigee, as well as reducing inclination as it inserts the payload into geostationary orbit. Separation of Blagovest No.14L came after the end of this burn.

Tuesday’s launch was the third of the year for Proton, following missions at the end of May to deploy the Yamal 601 communications satellite and in mid-July to place the Spektr-RG telescope into orbit.

Proton’s next assignment is a commercial launch, currently slated for 15 September, that will deploy the Eutelsat 5 West B satellite and Northrop Grumman’s MEV-1 satellite servicing experiment. Two more launches before the end of the year are expected to carry an Elektro-L weather satellite and a pair of Ekspress communications satellites.