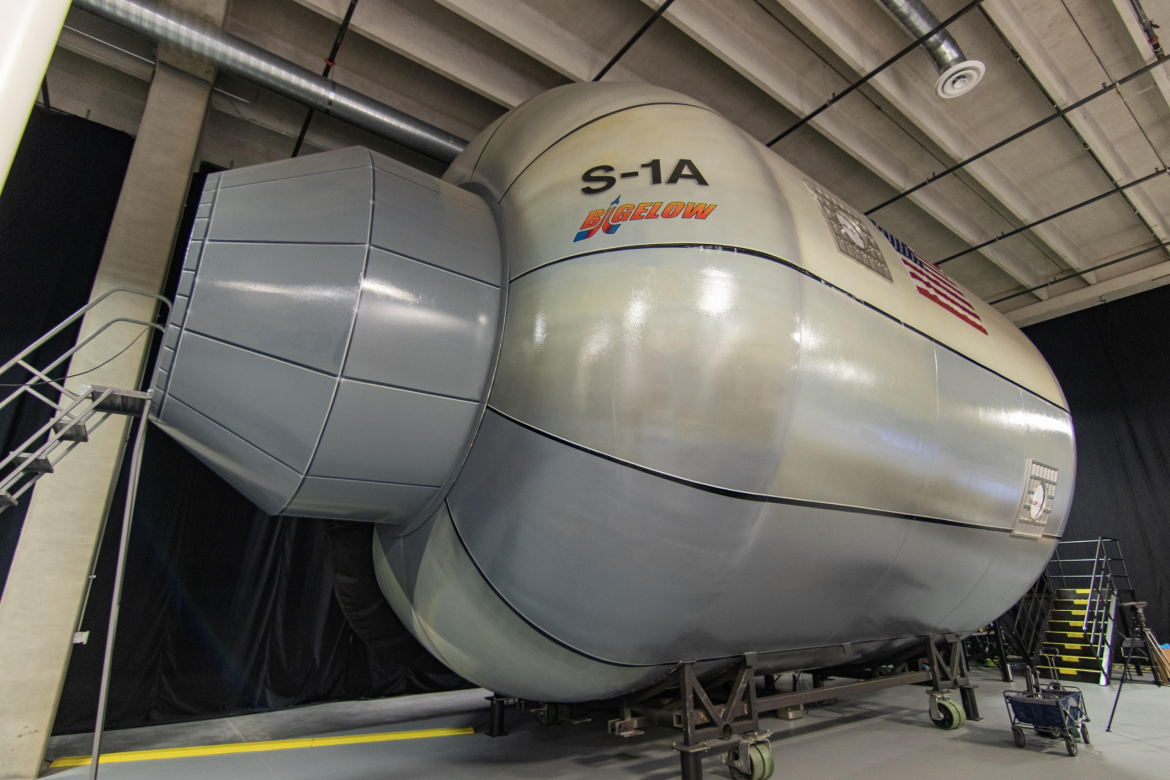 While Bigelow Aerospace’s expandable module, BEAM, continues to perform above all expectations while attached to the International Space Station (ISS), the company has larger ambitions for its range of modules, centered around the B330 – a huge inflatable module. The key focus is on attracting NASA to select B330 as a transportation module for long-duration trips to Mars.

Bigelow already has a wealth of experience in space, ranging back to the days of its Genesis modules that tested the technology that has matured into their latest designs.

Genesis I, the world’s first inflatable spacecraft, was carried into its 320 mile orbit on top of a converted Cold War-era ICBM (Intercontinental Ballistic Missile) in December 2006.

“With Genesis I, it was our first rodeo. We didn’t know exactly what to expect,” noted program officials as they followed it up with the Genesis II module a year later. 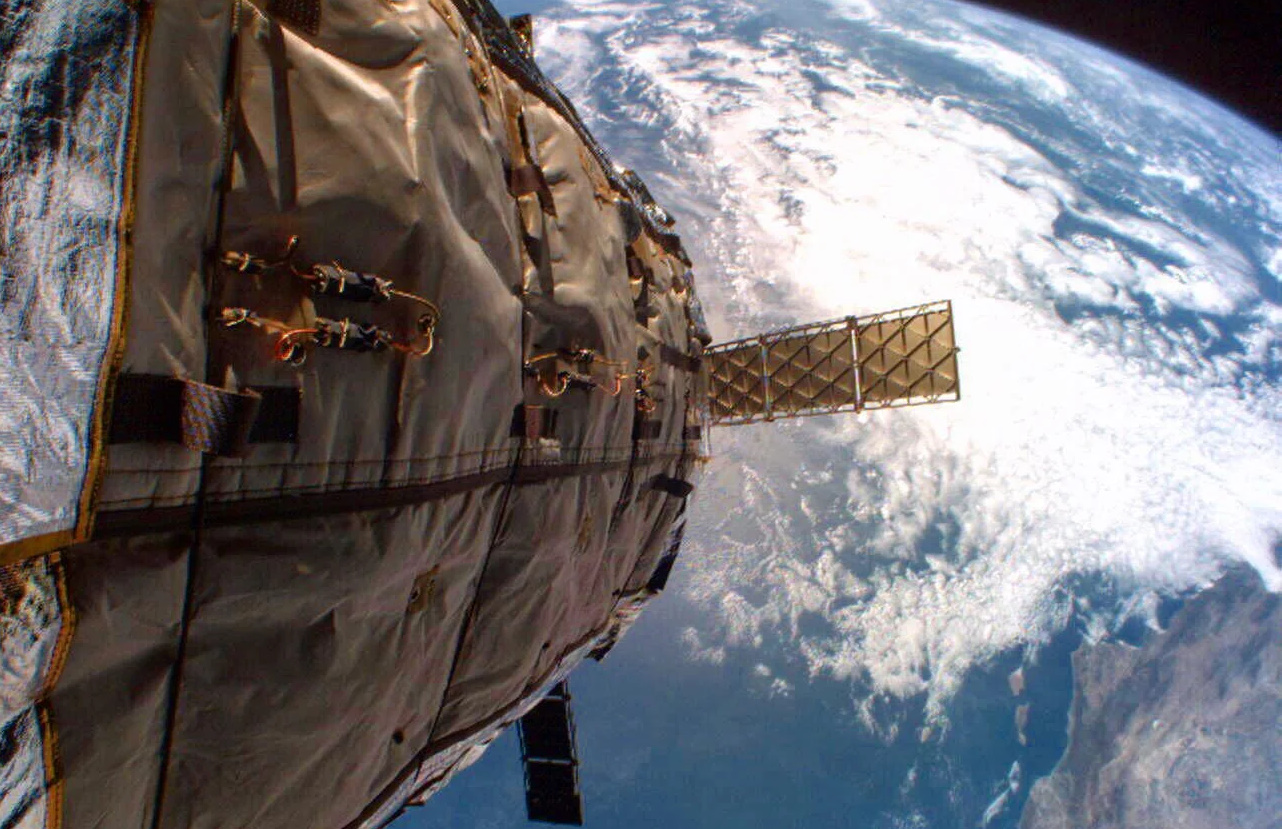 Genesis I on orbit – via Bigelow Aerospace

The company’s ambitions inflated into concepts for Moon and Mars bases, utilizing NASA experience via an unfunded Space Act Agreement (SAA). During this period, Bigelow was tasked with creating two reports (or Gates) to NASA on the future capability of their inflatable systems.

Gate 1 contained everything from an examination of past spaceflight accomplishments to future operations in Low Earth Orbit (LEO) to Lagrangian Point missions to cis-lunar (the region outside Earth’s atmosphere extending out to just beyond the Moon’s orbit) missions.

Gate 2 was tasked with identifying and establishing mission proposals based on the company’s stated contributions identified in Gate 1 and Bigelow’s stated mission and exploration interests.

Some of the concepts were highly impressive, not least the huge Olympus Carrier module. 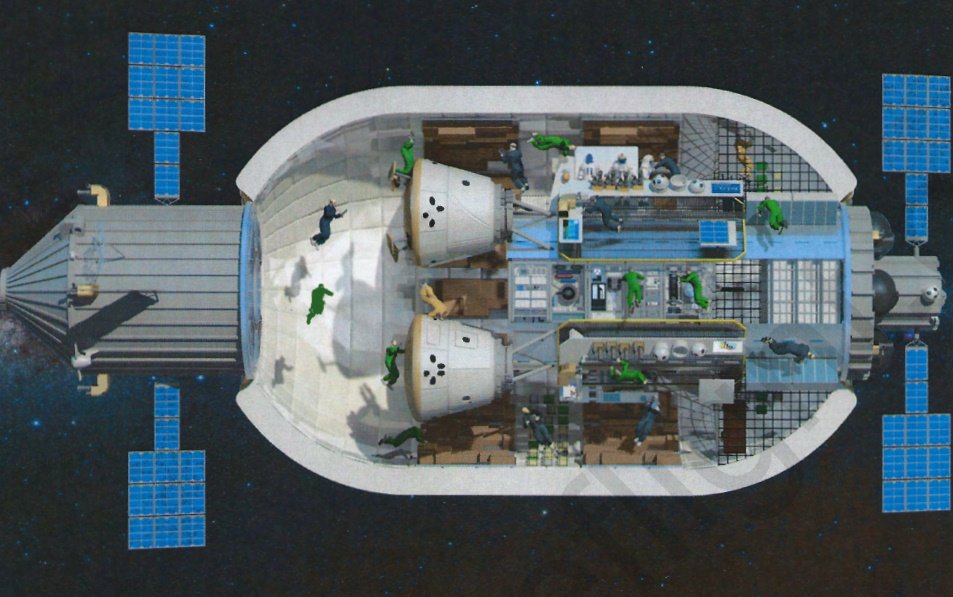 However, the B330 was highlighted as both highly capable and with the ability to be lofted on a single launch.

While this work was ongoing, Bigelow Aerospace was already working towards a demonstration module that could be launched on a Cargo Resupply Mission (CRS) and attached to the ISS for testing.

The Bigelow Expandable Activity Module (BEAM) rode inside SpaceX’s CRS-9 Dragon in 2016 and was installed on to the Node 3 Aft port of the Station. 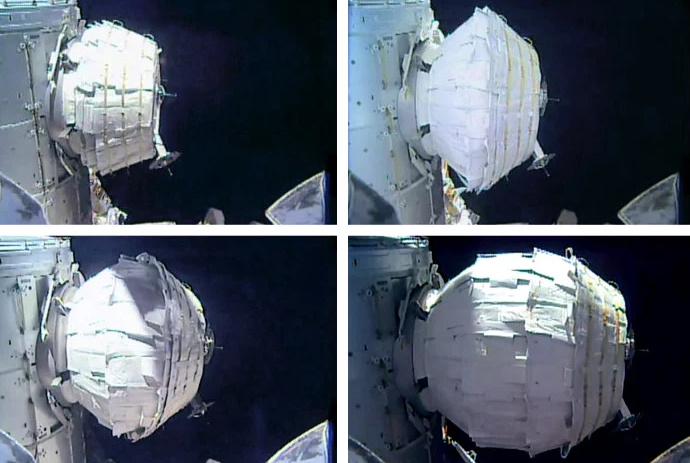 BEAM during its expansion on the ISS after installation – via NASA

It was then expanded and was set to remain in the ISS for only a matter of months. But its performance has been flawless to date and it still resides on Node 3 today and is being used as a storage facility for the ISS crew.

Bigelow Aerospace had additional interest in the ISS in 2016 when they announced a partnership agreement with United Launch Alliance (ULA) to launch two B330 space habitats.

Bigelow noted that both B330s could be used as free-flying orbital labs while the option existed – pending approval from NASA – to dock one of the B330s to the ISS. 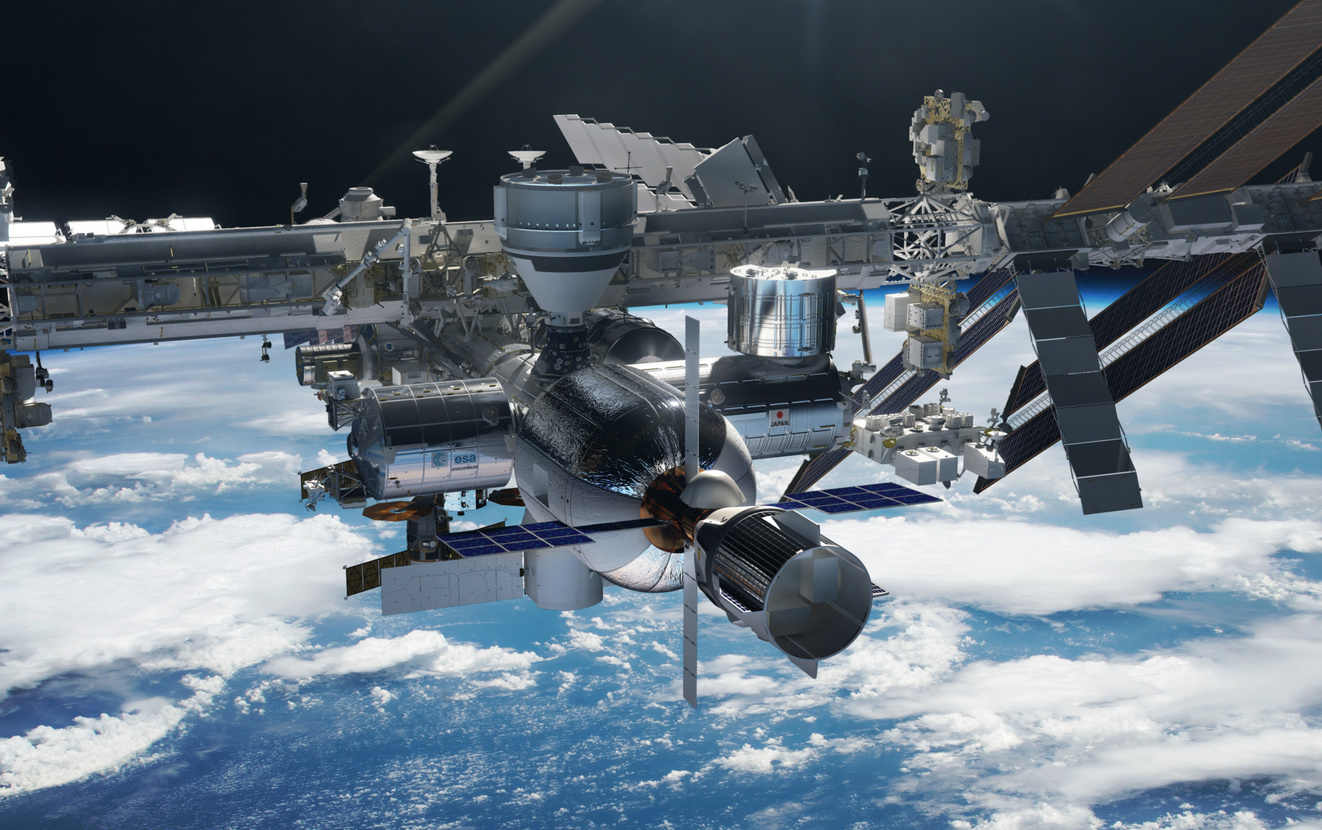 Notional readiness in 2019 for launch in 2020 has not advanced as a firm plan since, but it again highlighted the focus on the B330.

This module is again the focus with the latest drive at Bigelow Aerospace, which invited media to check out work involved with a two-week-long ground test of an all-steel testing unit (Mars Transporter Testing Unit) of a B330 under the NextSTEP Phase 2 program for NASA.

This module is one of six demonstration projects funded as part of the NASA program, with other companies building full-sized NextSTEP-2 prototypes for space habitats – namely Boeing, Lockheed Martin, Northrop Grumman, Sierra Nevada Corp., and Nanoracks.

During the media event, Bigelow provided more details on the module while expanding on its potential use in numerous deep space exploration roles.

“The B330 is an autonomous, expandable independent space station that gets to space in a single launch. This large space station can accommodate four people indefinitely and five people for many months,” noted Robert T. Bigelow in an overview to accompany the media event in Las Vegas. 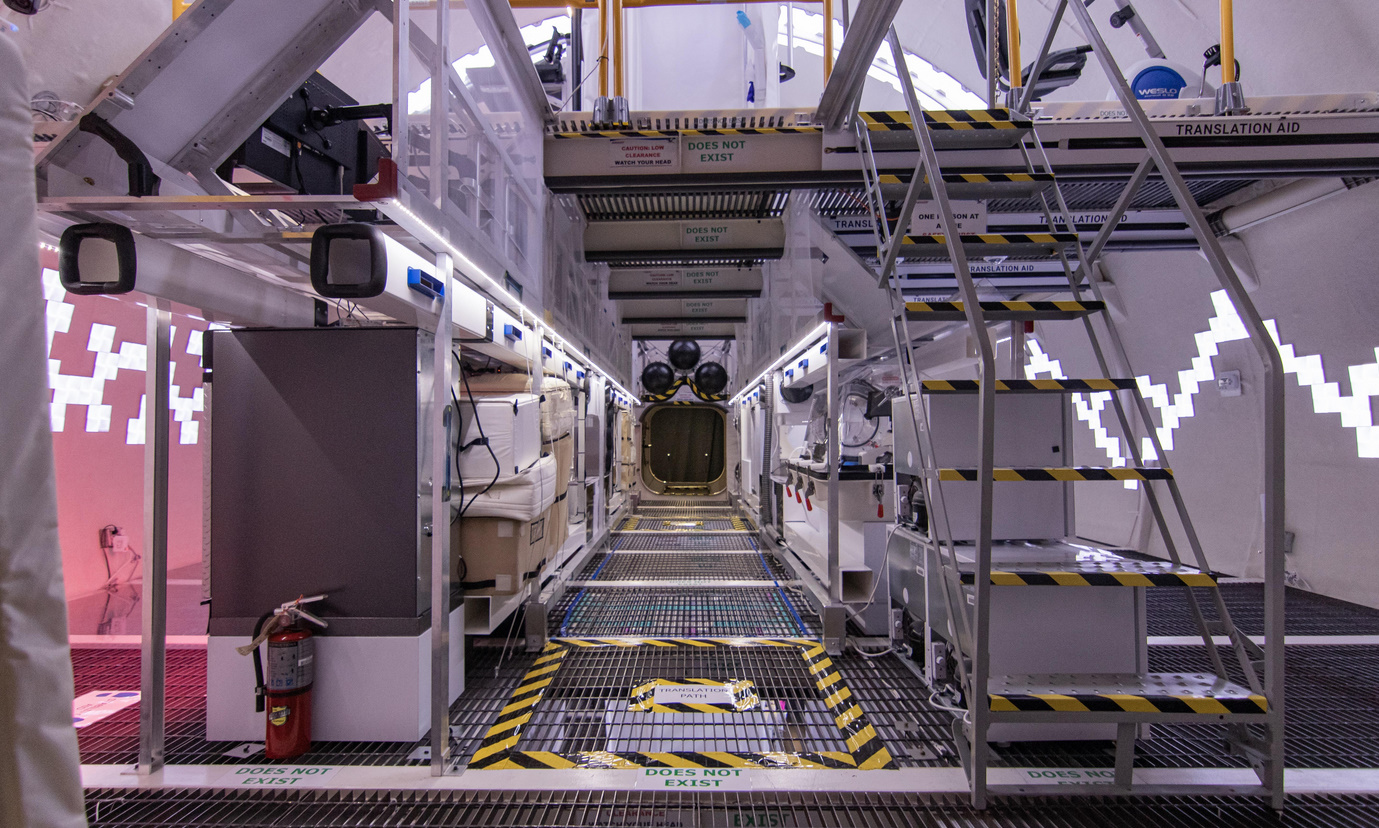 Inside the B330 demonstrator – photo by Jack Beyer for NSF

“The ground test is an important milestone for Bigelow Aerospace and B330. We are hosting over 60 NASA engineers, test leads and support staff as well as eight astronauts. In contrast to the other NextSTEP Phase 2 participants, we chose to keep our ground units at our facility so we could continue to develop and test. We also have many units that are too large and complex to feasibly transport back and forth.”

Promoting its potential as a transportation module for crews heading out on the long journey to Mars, Mr. Bigelow touted the B330’s NASA heritage and lessons employed from previous studies, not least the issue of protecting crews from radiation.

“The B330 has evolved from NASA heritage technology from the Transhab program. Expandable habitat technology was created from the Transhab program with the purpose of taking humans to Mars. This is important. In deep space, expandable structures have the potential to provide better protection against secondary radiation than traditional aluminum structures,” he noted.

This is what one of four crew quarters looks like. There would be an enclosure for privacy that is currently denoted by the black outline. The racks on the right represent personal locker space. pic.twitter.com/Gvt6EnMJVa

“The total effects of secondary radiation on humans are still unknown but have the potential to be very serious. Cancer is not the only big worry.”

Secondary radiation is a form of radiation exposure caused by the primary radiation’s interaction with matter – in this case, the physical structure of a station or spaceship.

The company also promoted its life support systems as “literally next generation”.

Although NASA has opted to press forward with Northrop Grumman’s modified Cygnus vehicle as a key module for the Agency’s proposed Gateway in lunar orbit, Mr. Bigelow still cited the roadmap that is currently laid out for NASA – which will begin with the buildup of the Gateway Station.

“It is important to listen to what President Trump has been saying about Mars. The way to Mars is to the Moon. The way to the Moon is through the Gateway. The B330 is an exploration-destined space station, and we are excited about its future.”

Bigelow spoke of his pride for the B330’s redundancy (dual toilets, gallies, and prop systems) on his company’s impressive hardware that was on display this week.

Interestingly, during the tour, Robert Bigelow himself revealed he isn’t a fan of real windows, instead favoring large curved screens conforming to the hull. He also noted that he didn’t favor aluminum as a construction material for space habs due to secondary radiation risks.

Click below to watch NSF’s Jack Beyer provide a first-person look at the interior of the Bigelow modules.