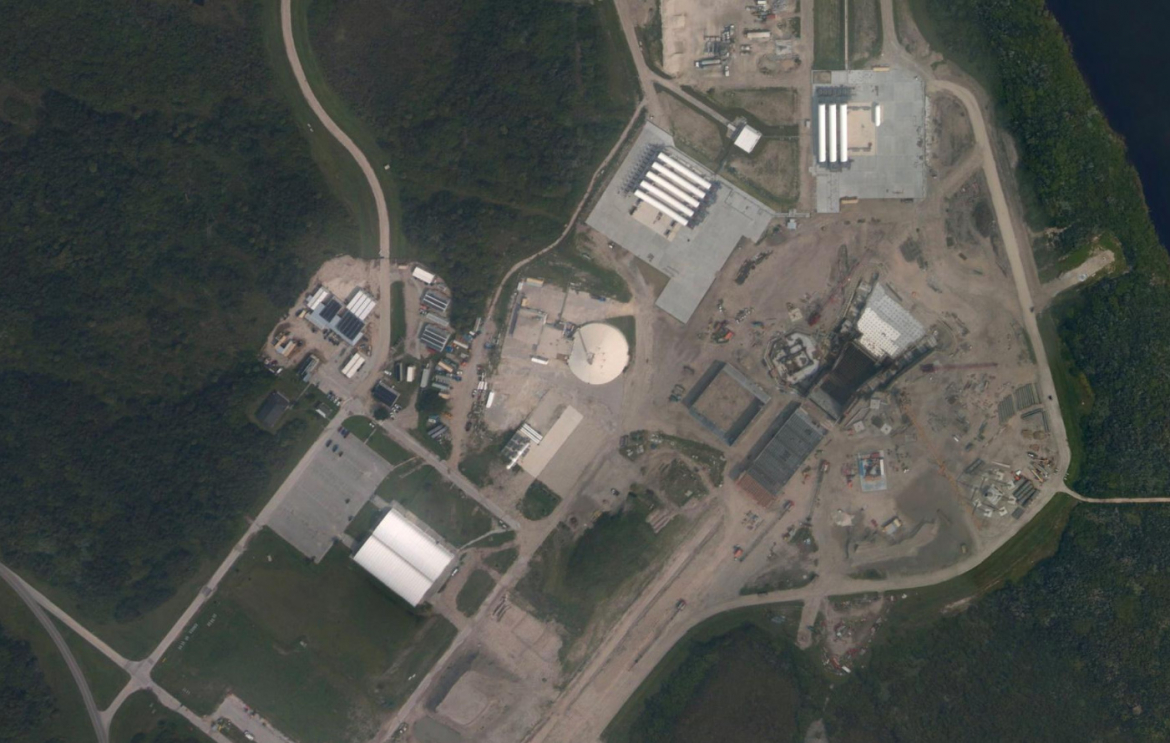 Work on Blue Origin’s New Glenn launch complex – LC-36 – is well underway. Recent aerial imagery of Cape Canaveral from NOAA shows how far Blue has come on the launch complex. Meanwhile, the company is also working on an engine factory in Alabama, and a first stage refurbishment facility near Kennedy Space Center.

LC-36 – from Atlas-Centaur to New Glenn

LC-36 was originally constructed to launch the Atlas-Centaur – with its revolutionary liquid hydrogen-powered upper stage. The complex hosted its first launch on May 18, 1962. Due to the Atlas-Centaur’s increasing flight rate – and low reliability early on – a second pad – LC-36B –  was built near the existing LC-36A.

Throughout the 1990s, the complex was modified to launch the Atlas I, II, and III rockets. LC-36B hosted the complex’s final launch – the final Atlas III – on February 3, 2005. The site was deactivated, and Atlas launches moved a few miles north to SLC-41.

In 2007, the service structures at LC-36 were demolished to eliminate the risk of the aging towers unintentionally collapsing.  When the complex was transferred to Space Florida in 2010, it was made available for companies to lease.

Later in 2015, Blue Origin leased the complex to host their in-development New Glenn launch vehicle. The company also leased the adjacent LC-11 for use as a test site for their methane-powered BE-4 engines – seven of which will power New Glenn’s first stage. 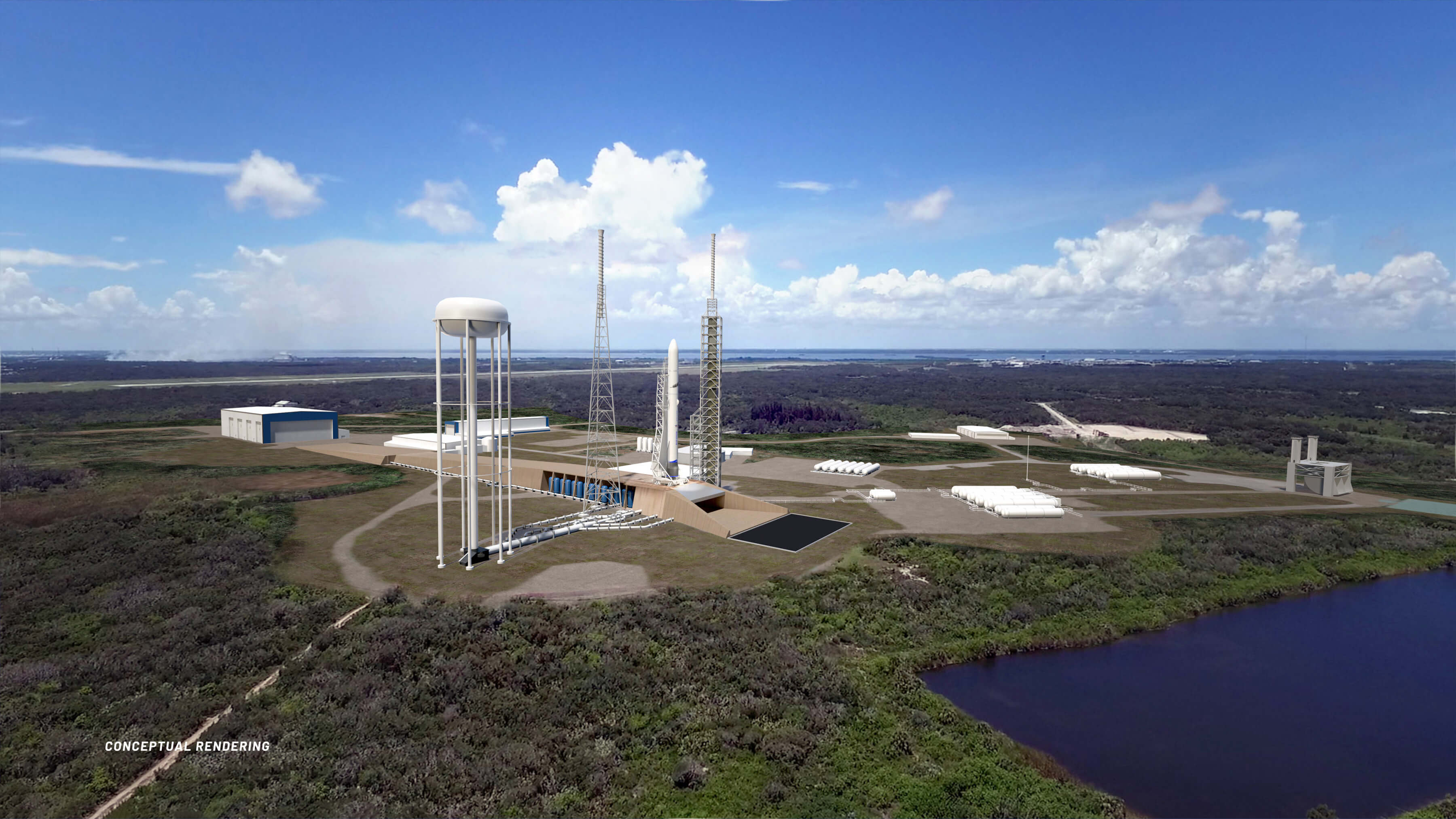 Blue began renovating the site by demolishing many existing facilities – including the launch pads themselves. The company stated that much of the concrete from the old pads would be recycled into new roadways at the complex.

Unlike many launch companies at Cape Canaveral, Blue Origin has decided to build their own, clean-sheet launch pad for New Glenn.

Like many of their projects, Blue has been quiet about the pad’s construction progress. Its location – far away from any public viewing areas – has also contributed to the lack of updates.

However, NOAA recently undertook a post-Hurricane Dorian aerial imagery campaign of the eastern Florida coast – which included much of Cape Canaveral. During the campaign, NOAA captured a high-resolution view of LC-36 – showing how far the complex has come in its construction.

Notably, the imagery revealed that Blue has started foundation work for the Horizontal Integration Facility (HIF) at the complex. The HIF will be used to integrate and process New Glenn rockets before they are rolled out to the pad. 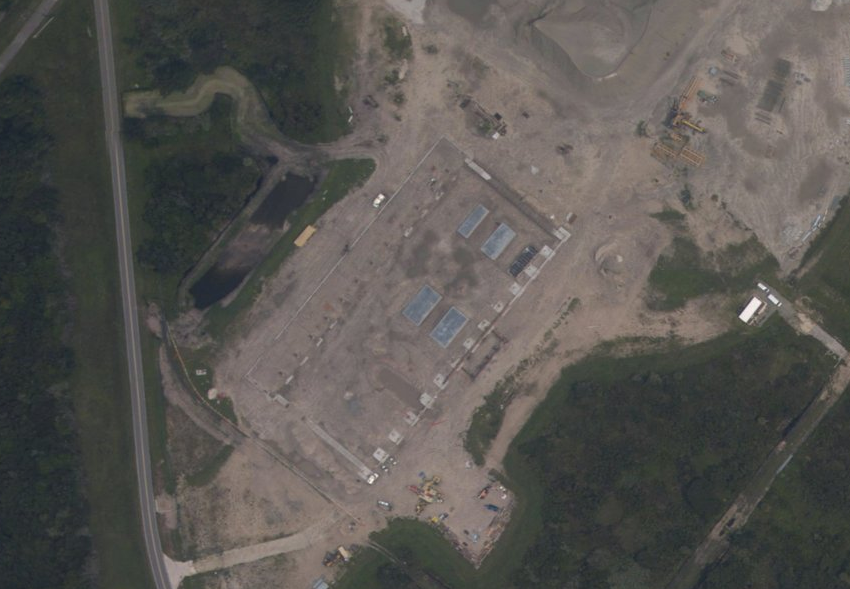 An aerial view of the HIF progress. The outline of the building, and that of its large pad-facing door, can be seen. Credit: NOAA.

Features around the launch pad itself are beginning to take shape. The foundation of the service structure is visible, along with those of the lightning mast and water tower. The tank farms – which store the propellants used by New Glenn – are also in the process of being installed.

For reference, the launch pad proper is being built on the site of the former LC-36A, while the HIF is being built just southwest of where LC-36B was located. 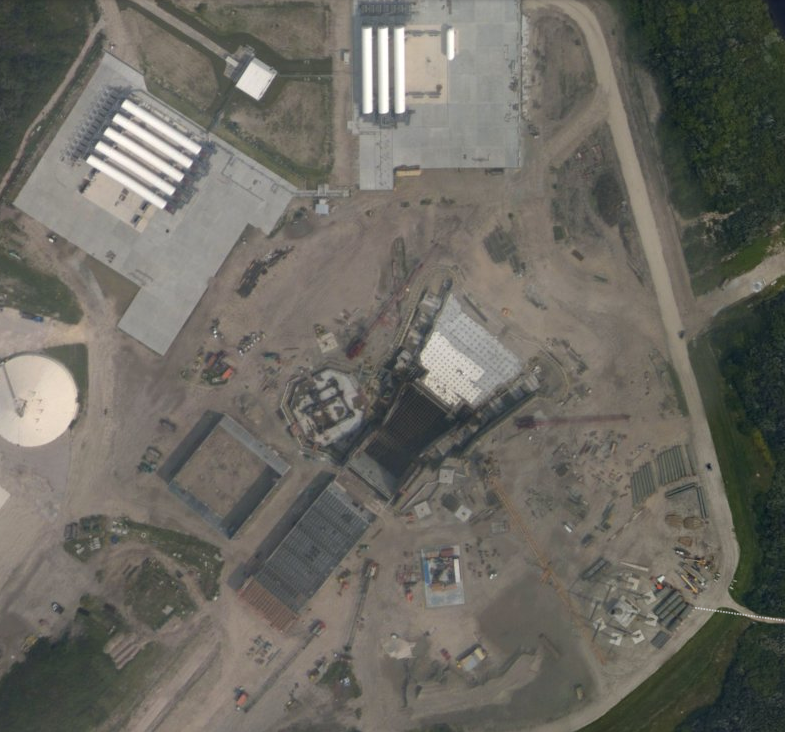 A view of the launch pad at LC-36. The pad and flame trench can be seen in the center, with the octagonal service structure foundation to the immediate left. The three foundations of the lightning mast are just below the pad, and those of the water tower are at the bottom right of the image. Credit: NOAA.

To the immediate north of LC-36, Blue is building a BE-4 test stand at LC-11. The stand will use the same liquid methane and liquid oxygen (LOX) systems as the launch complex.

Renders released by Blue Origin suggest that the stand will have two bays – meaning they can work on two engines at once. 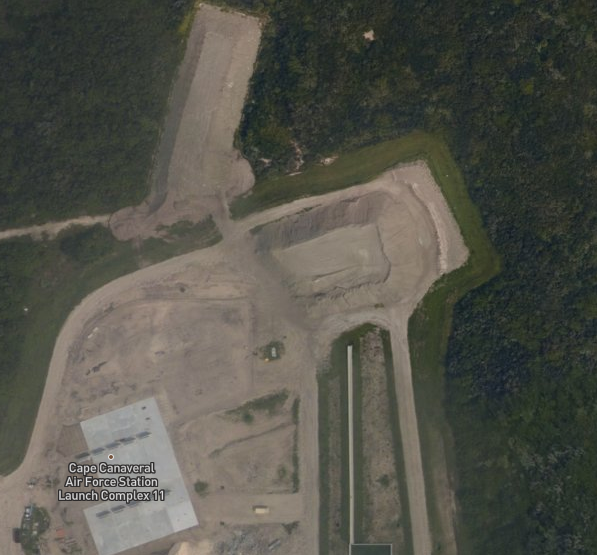 An aerial view of LC-11, with the location of the future BE-4 stand in the center. Credit: NOAA.

New Glenn vehicles will be built inside Blue’s dedicated factory at Exploration Park, near Kennedy Space Center. The factory was completed in 2017 and was outfitted with machinery to assemble most of the major elements of New Glenn. These include the stage tanks, fairing halves, and payload adapters – but not the engines. Officials from Blue Origin have confirmed that parts of the first New Glenn are currently being built inside the factory.

Work has started on a New Glenn refurbishment facility next door to the factory at Exploration Park. Few details have been released, but it is known that the new building will be used to refurbish and test recovered New Glenn first stages. According to Blue, each first stage will be rated for at least 25 flights. 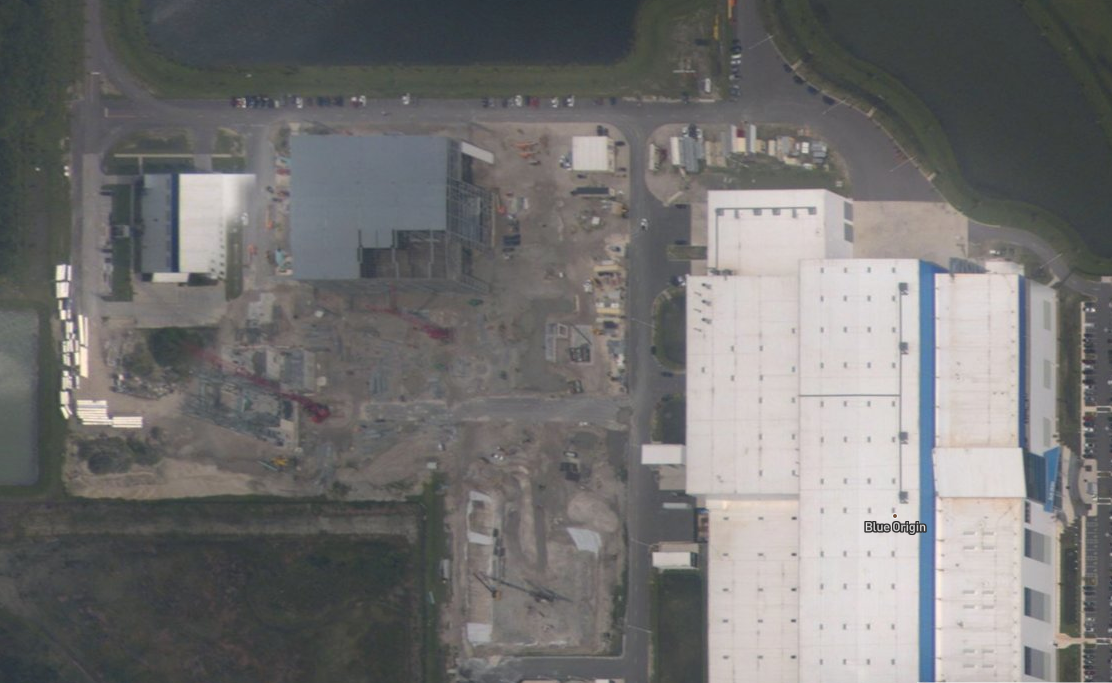 View of the new refurbishment and testing facility under construction. A portion of the main New Glenn factory can be seen on the right. Credit: NOAA.

The BE-4 engine will not only be used on New Glenn, but also ULA’s Vulcan rocket. Early BE-4 engines are being built at Blue’s headquarters in Kent, Washington, and tested at Blue Origin’s West Texas facility.

In order to meet the coming demand for the BE-4, Blue has begun construction of a $200 million factory in Huntsville, Alabama. The company broke ground in January of this year and has progressed quickly with its construction. 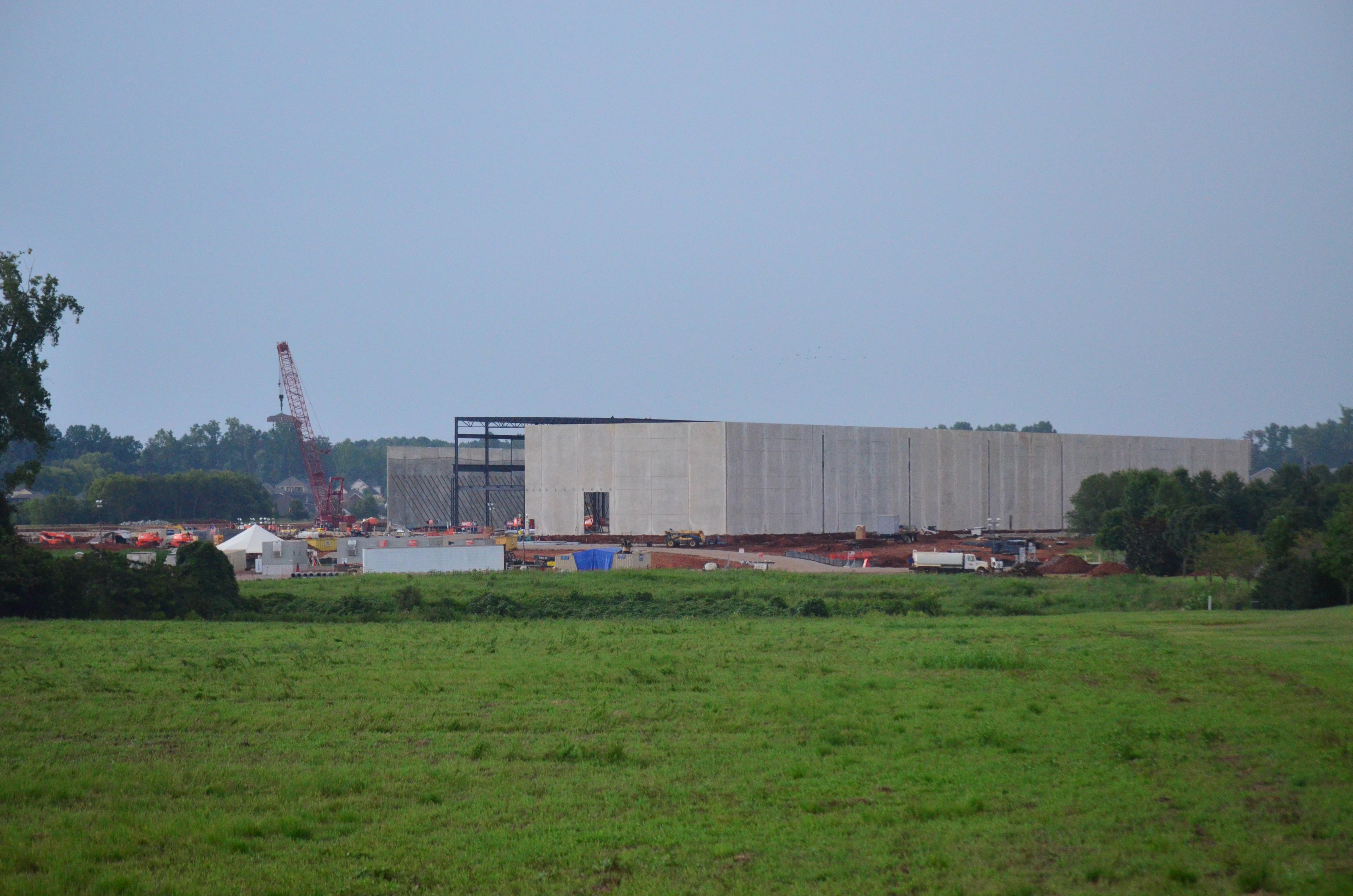 View of Blue Origin’s BE-4 engine factory under construction on August 4, 2019. Credit: User Gliderflyer for NSF/L2.

Once BE-4 engines are completed in the new factory, they will be tested on a historic test stand at NASA’s Marshall Space Flight Center. The stand, named Building 4670, was formerly used to test the first stage of the Saturn V, the Space Shuttle’s External Tank, and the RD-180 engine – used on the Atlas III and V.

The stand will also be used to test the new hydrogen-powered BE-3U engine, a vacuum-optimized variant of New Shepard’s BE-3 main engine. Two BE-3U engines will be used on the second stage of New Glenn.

Currently, Blue Origin is aiming for a 2021 maiden launch of New Glenn from LC-36.