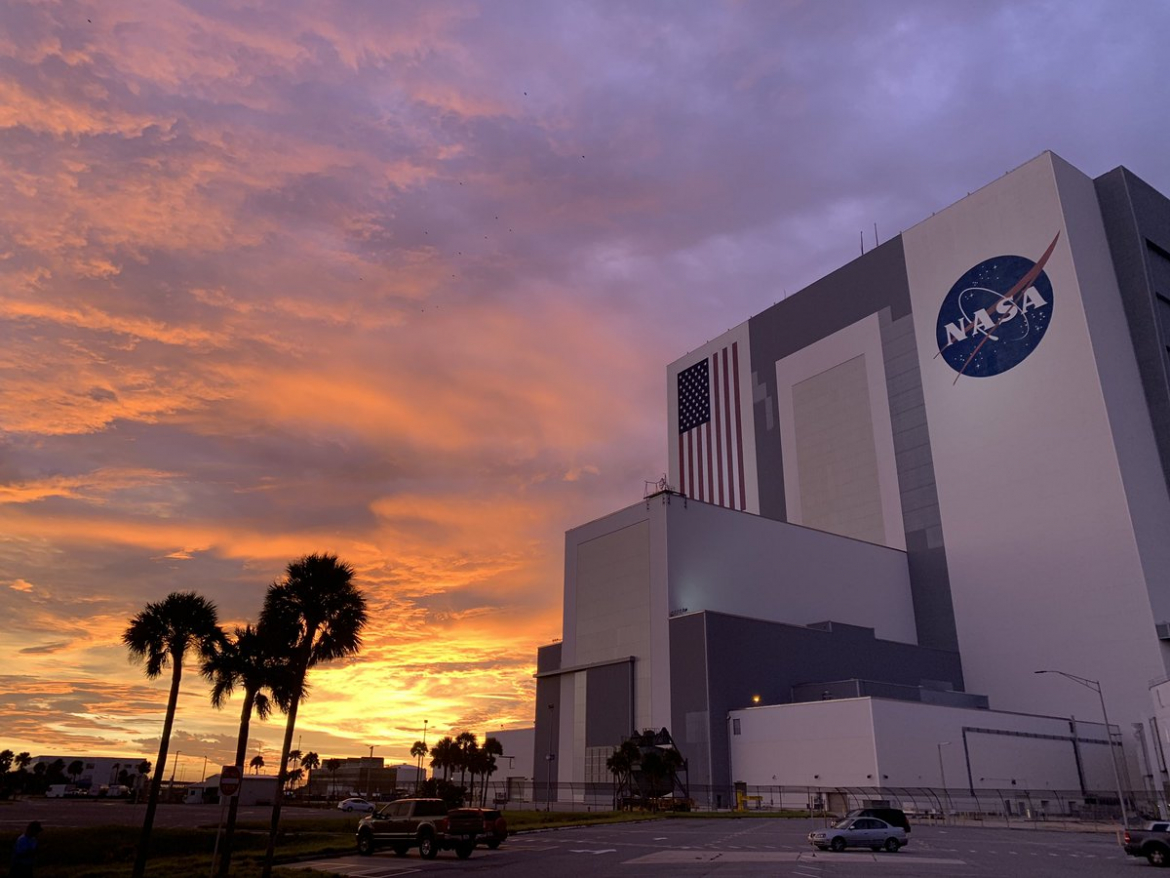 Hurricane Dorian passed 129 km (80 miles) east of the Kennedy Space Center and Cape Canaveral Air Force Station with sustained winds of 110 mph.  While the storm avoided landfall, it brought 62 mph sustained winds and gusts of 90 mph to the spaceport.

Teams will conduct a thorough inspection of all KSC/CCAFS facilities on Thursday to determine the extent of damage to the space center.

The Cape is no stranger to hurricanes, and the Kennedy Space Center’s/Cape Canaveral Air Force Station’s HURCON readiness procedures are well rehearsed and exercised.

Last used in 2016 and 2017 for Hurricanes Matthew and Irma, the centers escaped wide-scale damage from Matthew, though Irma did significantly disrupt water systems at the spaceport.

In 2004, the iconic Vehicle Assembly Building (VAB) received significant damage to its side paneling from Hurricanes Frances and Jeanne, both in September of that year.

Frances was the second of three major hurricanes to impact the spaceport within 7 weeks in 2004, with Hurricane Charley passing over Orlando (40 miles) to the west and Daytona Beach (40 miles) to the north as a Category 2 and then 1 hurricane, respectively. 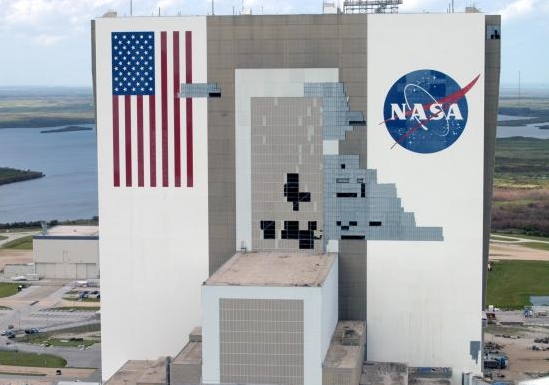 Damage to the VAB from Hurricanes Frances and Jeanne, both in September 2004. (Credit: NASA)

Frances’ slow 1-3 mph landfall and near stall-out over Florida brought significant, prolonged hurricane-force winds (above 74 mph) to the space center, damaging the VAB and other structures.

After that, a few hurricanes and tropical storms had indirect impacts on the Cape from 2005-2016 until Hurricane Matthew threatened the complex as a potential Category 5 (sustained winds in excess of 157 mph) hurricane.

Matthew ended up skirting the east coast of Florida as a Category 3 storm, passing just 30 miles east of the Cape.

Most of Matthew’s destructive winds missed the space center thanks in part to an eye-wall replacement cycle that weakened the hurricane and condensed its winfield as well as a wobble in its path to the east that prevented its landfall at the Cape just before it passed the spaceport.

One year later, in September 2017, Hurricane Irma impacted the entire state of Florida.  Large uncertainty in Irma’s northward track gave the potential for a landfalling Category 5 hurricane at any point on the peninsula. 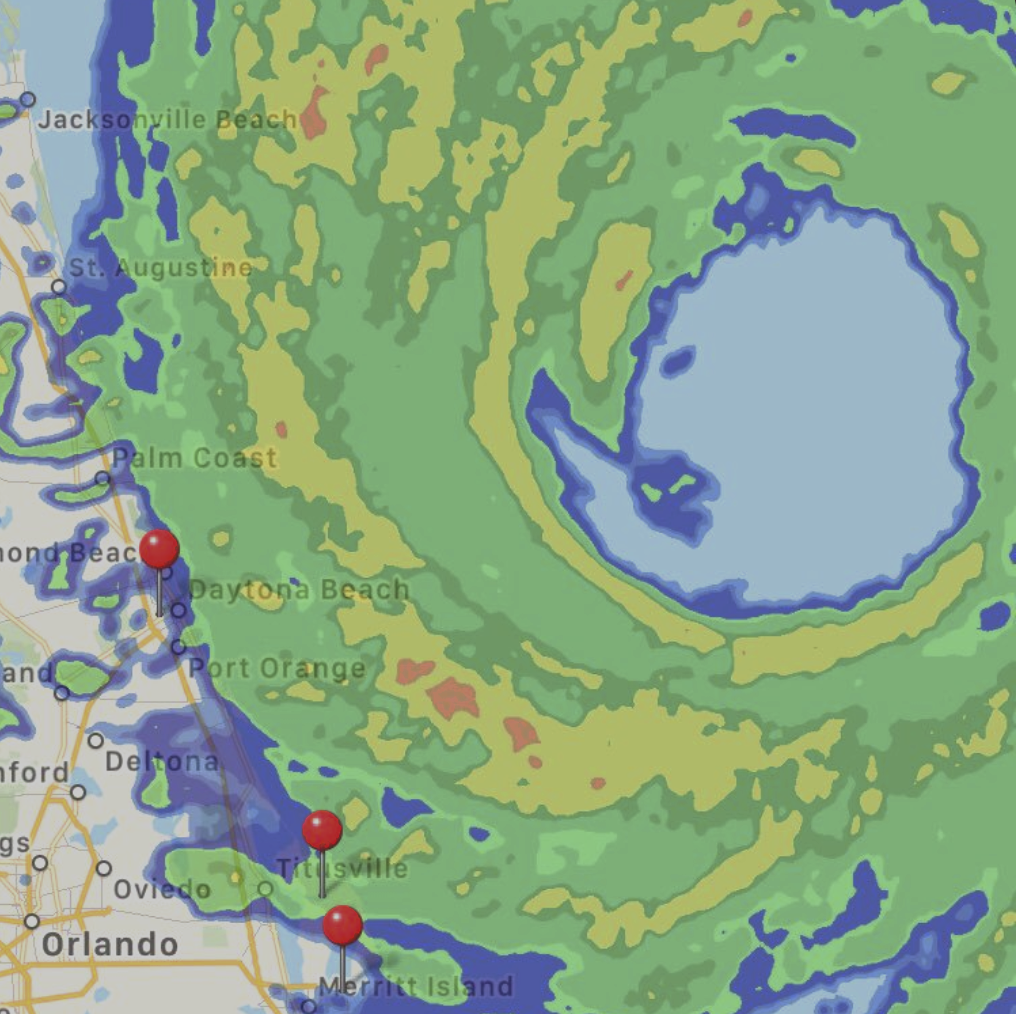 Irma eventually made landfall in the Keys and the southwest coast of Florida before jogging slightly inland and racing up the western-centerline of the state.

Kennedy and the Cape were again spared major damage, but Irma did significantly impact the water systems at the Kennedy Space Center, forcing the facility to remain closed for nearly a week after the storm passed.

The spaceport works under the HURCON (Hurricane Condition) alert system, ranging from HURCON IV “72 hours prior to forecasted arrival of 50 knot / 58 mph sustained winds” through to III, II – when all non-essential personnel are released from duty – and then HURCON I.

(UPDATE – 18:27 EDT on 30 August: The 17:00 EDT projected path update for Hurricane Dorian now indicates a strong possibility for a coastal hugger storm, meaning its winds will not decrease as rapidly as they would have with landfall.

The update also shows a strong potential of Dorian maintaining Category 2 or 3 status as well as a potential direct eye wall impact to the Kennedy Space Center and Cape Canaveral Air Force Station.

UPDATE: 08:25 EDT on 1 September: The 08:00 EDT update for Hurricane Dorian.  The storm has attained Category 5 hurricane status with maximum sustained winds of 160 mph. The path continues to indicate the possibility of a landfall on the Florida east coast near Cape Canaveral.

Sustained tropical storm force winds of 39 mph are expected to arrive at the Cape Monday morning before 08:00 EDT.

UPDATE: 14:08 EDT on 1 Sept.: Hurricane Dorian now has sustained winds of 185mph.  The storm made landfall at Elbow Cay, Abacos, The Bahamas at peak strength with winds gusting to 220 mph.  A landfall on Florida near Cape Canaveral is still possible.

UPDATE: 17:15 EDT on 1 Sept.: Dorian has maintained its sustained wind speed strength of 185mph over The Bahamas.  Its forward speed has slowed slightly, as the models have predicted.  Landfall in Florida as a Category 4 hurricane is still a possibility.

The Kennedy Space Center and Cape Canaveral Air Force Station are now under Hurricane Warnings per the National Hurricane Center.

UPDATE: 10:27 EDT on 3 Sept.: Hurricane Dorian is a Category 3 hurricane over Grand Bahama Island. The storm has begun its northward turn and its center is now expected to remain offshore of Florida’s east coast.

KSC and CCAFS are still under Hurricane Warnings and the threat for severe weather and winds is still high.

The spaceport is at HURCON I condition – the highest level of preparedness – and will remain in such a condition until Dorian passes or forecasters are certain that the space center will not experience tropical storm force winds.

Life-threatening storm surge and hurricane-force winds are still expected along much of Florida’s east coast, including at KSC and the CCAFS.

UPDATE: 17:01 EDT on 3 September: Dorian is now a strong Category 2 hurricane with winds of 110mph.  Forward movement has increased to 5mph to the Northwest.

The storm is now lifting toward the Florida peninsula, though landfall is not expected.

KSC and CCAFS are currently expecting a general 1ft above land-level storm surge and sustained winds between 39-80mph depending on how close Dorian actually approaches.

UPDATE: 18:27 EDT on 4 September: KSC/CCAFS appear to have been spared wide-scale damage from Dorian, which passed 129 km (80 miles) to the east of the spaceport.  An extensive on-the-ground survey of damage and the condition of the centers will be conducted on Thursday, 5 September)

Early Friday morning, 30 August, NASA’s crawler transporter team of engineers picked up the SLS Mobile Launcher from LC-39B and began rolling it back to the VAB for safe haven ride-out of Dorian.

As Dorian continued its slow approach to the Cape, KSC and the Cape Canaveral Air Force Station closed on Monday in preparation for Dorian’s impact to the centers.

NASA's Exploration Ground Systems is moving the enormous mobile launcher from Launch Pad 39B back to the Vehicle Assembly Building for safe keeping during #HurricaneDorian. Here's some footage from the move at @NASAKennedy. pic.twitter.com/OwePCnc8dc

For the Kennedy Space Center, a Rideout Crew of 100-120 people are staged inside the Launch Control Center (LCC) attached to the southeast side of the VAB.

The LCC is built to withstand a Category 5 hurricane.

The VAB and former Orbiter Processing Facilities – now home to the Air Force’s X-37B spaceplanes and Boeing’s Starliner crew vehicles – are, according to NASA, built to withstand Category 3, 125 mph, sustained winds per the building codes of the 1960s and 70s when they were built.

Most older buildings from before the mid-1990s are only rated to withstand Category 3 hurricanes per the then state building codes.

Newer structures, such as the KSC headquarters building and the SpaceX Horizontal Integration Facilities at LC-39A and SLC-40 are built to withstand Category 5 hurricanes.

United Launch Alliance’s (ULA’s) structures vary, with the company saying in a statement to NASASpaceflight that “All ULA facilities are designed to withstand hurricane force winds; those design loads vary relative to the facility and the timeframe in which it was designed/built. 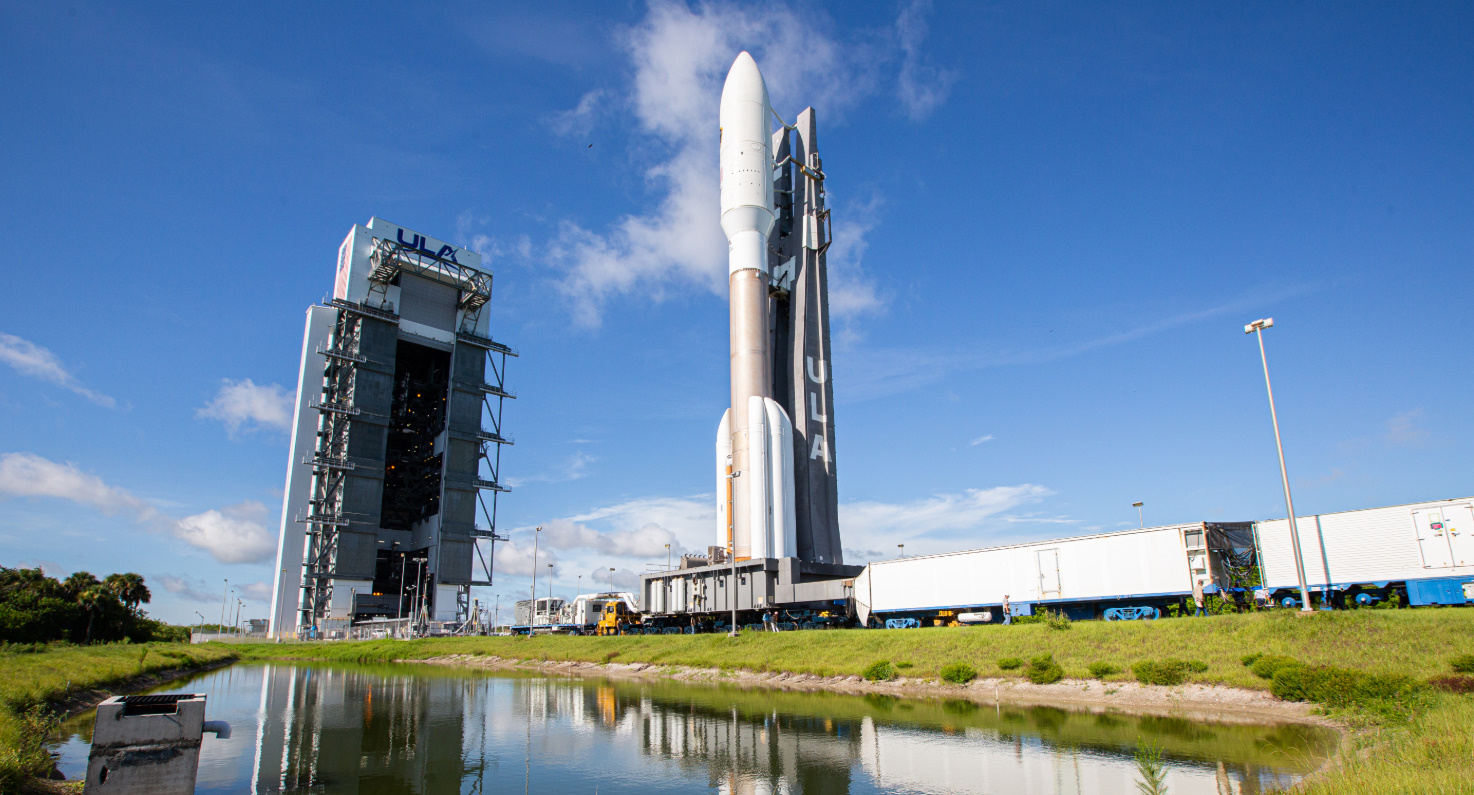 “Our design processes include additional factors on top of those wind loads, such that we would expect our systems to be likely capable of withstanding higher winds without suffering major damage.”

The new element at the Cape that was not present for the last round of storms in 2016 and 2017 is SpaceX’s outside fabrication and manufacturing facility for Starship Mk2.

In a statement to NASASpaceflight, SpaceX said they were taking all necessary precautions to secure the equipment and burgeoning Starship.

This will included moving as much equipment and components as possible inside and tying down what could not be moved.

Both of SpaceX’s Starship construction sites in Florida and Texas are in hurricane-prone locations, so this type of securing procedure was always part of SpaceX’s contingency plan for their first two Starships.

(UPDATE: 08:37 EDT on 1 September: The Cocoa Beach Starship has been placed inside its protective enclosure ahead of hurricane Dorian’s anticipated arrival.)

FINAL STARSHIP UPDATE: As of this early this morn all people (at least visibly) are off property, gates are locked and #Starship is inside but w/o doors. Not sure how much protection this will provide but seems to be final before #Dorian arrives #Nasa #ElonMusk #Space #Mars 2/2 pic.twitter.com/xU0Flid21G

SpaceX itself is no stranger to hurricane preparations. The company launched and Return To Launch Site landed a Falcon 9 just 3 days before Hurricane Irma arrived.

SpaceX also had to secure the remaining parts of the Rotating Service Structure at LC-39A in 2016 and 2017 for both Hurricanes Matthew and Irma.

(UPDATE: 18:27 EDT on 4 September: Starship came through Dorian in good shape based on ground observations.  SpaceX will evaluate the condition of the Florida Starship extensively on Thursday, 5 September.)

FIRST STARSHIP UPDATE: As of this early this morn #Starship is still inside and seems to be fine. No evidence of people on site yet, but all the fabrication on the ground seems to also still be in place.. I think we dodged a bullet! #Dorian #Nasa #ElonMusk #Space #Mars pic.twitter.com/OMhJgAzJS6

**This article is part of NASASpaceflight’s LIVE coverage of Hurricane Dorian’s impact to Florida and the space center.  It will be updated as new information arises.**