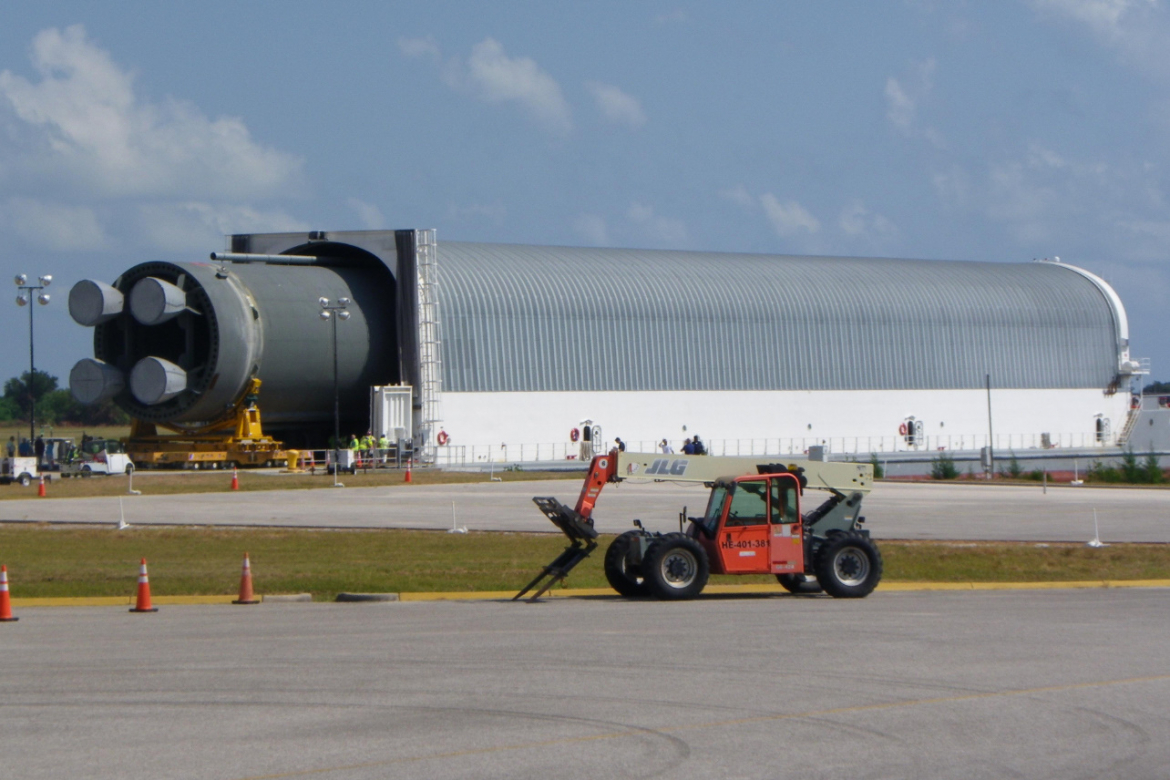 NASA and its contractors recently completed a dress rehearsal of shipping the first Space Launch System (SLS) Core Stage from the Michoud Assembly Facility (MAF) in New Orleans to the Stennis Space Center in Mississippi, where technicians practiced lifting a full-scale replica and placing it in the B-2 Test Stand where the real stage will be tested next year.

The civilian space agency’s Pegasus barge has since transported the simulator to the Kennedy Space Center (KSC) in Florida where the Exploration Ground Systems (EGS) team there will run through similar crane lifting procedures in the Vehicle Assembly Building (VAB) for Artemis 1 launch processing next year.

The Core Stage Pathfinder has the same size, shape, weight, and balance as a dry flight article, and was built to allow a detailed rehearsal of the transportation and crane operations before doing them with the first flight article. A dry Core Stage weighs over 100 metric tons, as much as Space Shuttle Orbiters did during flight, and NASA is employing a custom overland transportation system to carry it.

The Multi-Purpose Transportation System (MPTS) has also been used during SLS Stages development in conjunction with Pegasus to shuttle test hardware and other program flight elements between factories and test centers. In April, the Pathfinder was loaded on the MPTS the industrial area at MAF and then moved to the dock by remotely-controlled “self-propelled mobilized transporters” (SPMT), where it was loaded onto Pegasus for the relatively short trip to Stennis, where the test article was unloaded from the barge.

Crews at Stennis in August began a series of lifts of the Pathfinder, both off and back on to the transportation equipment, which culminated in a full sequence where the test article was rotated by two cranes from horizontal to vertical. The larger of the cranes, the test stand derrick, then lifted the Pathfinder into the B-2 position of the test complex where it was bolted into the test stand.

After fit and functional checks of hold-down and test equipment in the stand, the Pathfinder was removed and placed back on the MPTS in early September for loading back on Pegasus for the trip to Florida.

“All operations with the Core Stage Pathfinder are complete,” Marc Neely, Core Stage Green Run Test Operations and Execution Manager for NASA, said in an email regarding work at Stennis. “All objectives were met so no additional installations of the Pathfinder are planned. It was removed from the stand on Aug. 29 and has been placed into its mobile transport system and prepared for its journey to KSC.” 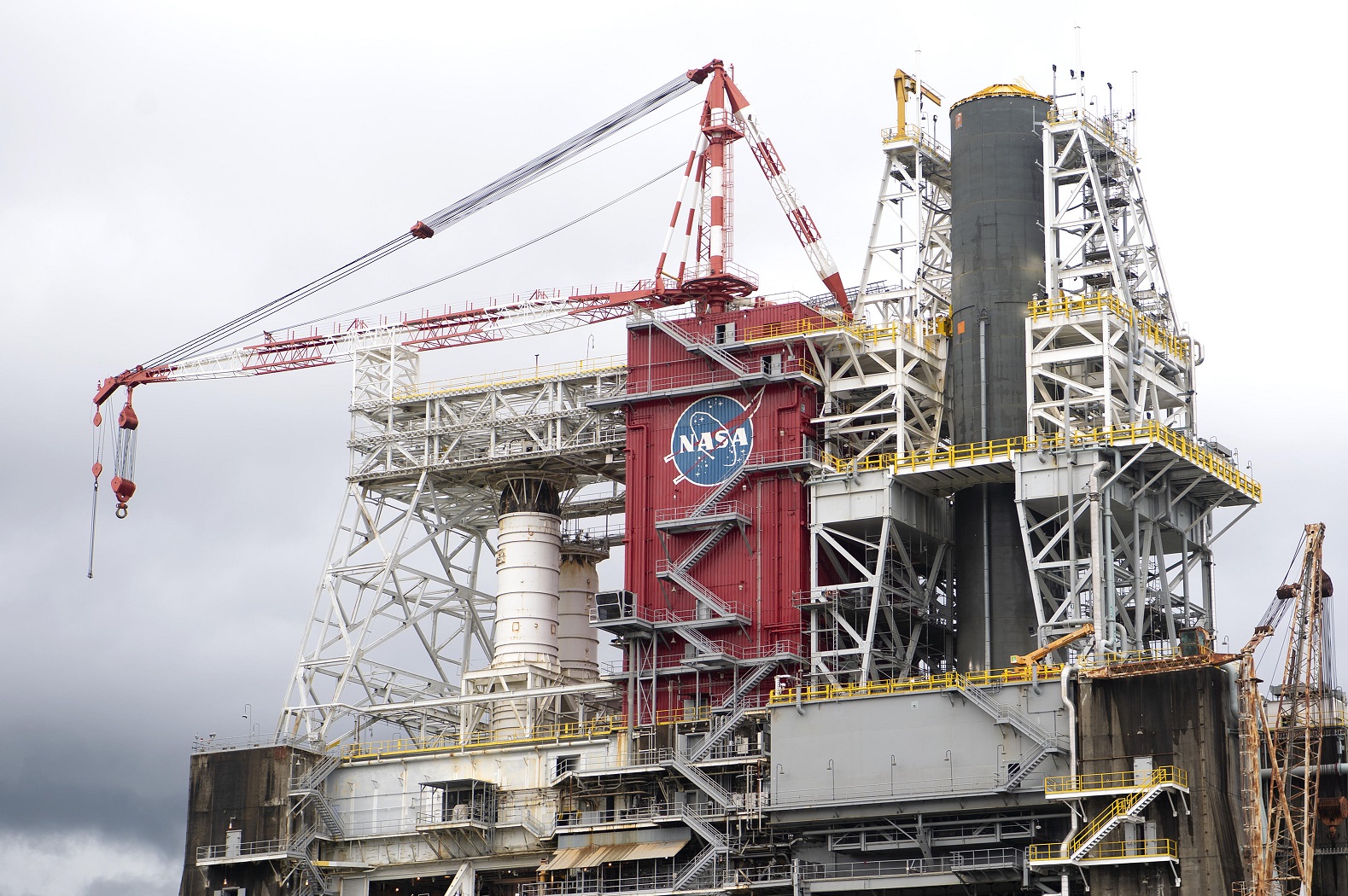 (Photo Caption: NASA’s Core Stage Pathfinder in the B-2 position of the test stand at the B Test Complex at Stennis Space Center on August 26 following installation. The stand is a dual-position facility that supports liquid hydrogen, liquid oxygen engine and stage testing. The B-1 position is currently used by United Launch Alliance to acceptance test individual RS-68 engines. The B-2 position has been used for testing stages from the Saturn V S-IC, to the Delta 4 Common Booster Core, to the Space Shuttle Main Propulsion Test Article.)

The Pathfinder is a full-scale mockup of a Core Stage. It has no moving parts, but does mimic the weight, center of gravity, size, and shape of a dry stage flight article.

The exterior is also outfitted with low-fidelity versions of the larger protuberances on the stage, such as mock-ups of the two liquid oxygen (LOX) feedlines on opposite sides and the systems tunnel that runs much of the length of the stage on its -Z side.

“The test article was ready for installation when it arrived,” Neely noted. “Installation was performed soon after the final piece of ground support equipment (GSE) required for the lift was delivered.” In the interim time, one of the tasks was for technicians to practice installations of a lift spider on the front of the test article, representing the mating flange on the forward end of the forward skirt.

The lift spider is the fixture used to do crane lifts and breakovers of the stage; in addition to supporting vertical installation of the stage into the B-2 Test Stand at Stennis for acceptance tests, a lift spider will be used in the VAB at KSC during pre-launch ground operations to stack the stage with the launch vehicle’s two Solid Rocket Boosters (SRB). The fixture is too heavy to let hang off the end of either a flight article or the Pathfinder while they are horizontal, so additional ground equipment is used to the bear its weight.

An initial lift was conducted to practice removing the Pathfinder from its horizontal transportation carrier, raising it horizontally above it, and then putting it back down in the carrier. 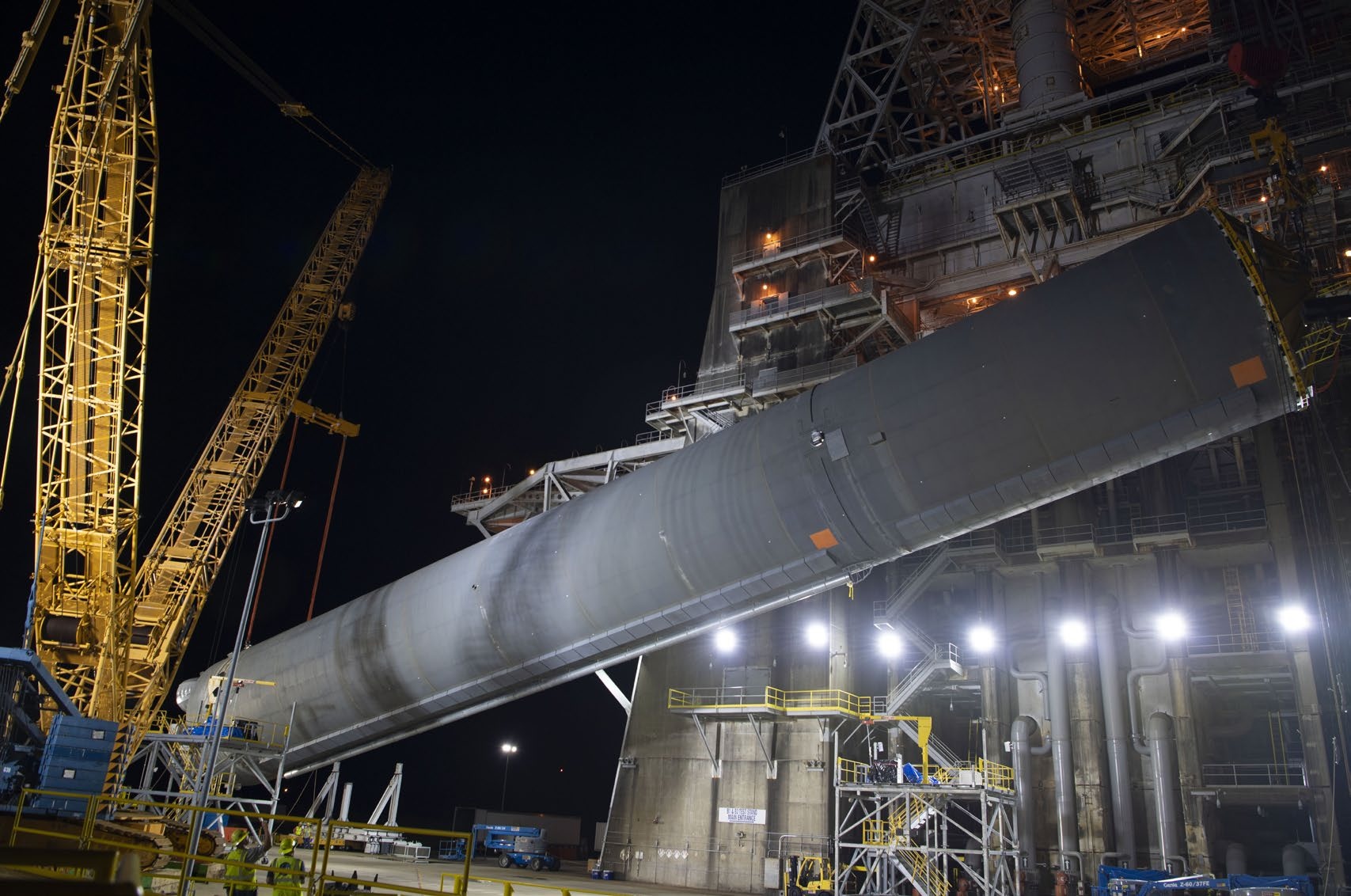 (Photo Caption: The front end of the Pathfinder is raised during the two crane breakover operation at Stennis on the night of August 24 to rotate the simulator to vertical from horizontal. A commercial crane is connected to the aft end of the Pathfinder (left) where the engine section is on a flight article. The test stand derrick crane is connected to the forward end (right) via a lifting fixture which is heavily shadowed in this image. The orange placards indicate the position of access doors on the -Z side of the stage. The rectangular protuberance running the length of the simulator is a low-fidelity representation of the profile of the systems tunnel.)

Neely also said the lift, breakover, and installation operations performed on August 24 were done overnight when weather is generally more favorable. “There is a wind limit for the operation and wind speed is generally lower from midnight to noon,” he noted.

For installation the test article was oriented with the -Z side facing to the north and the +Z side facing to the south. This also oriented the structural attach points properly for the final phase of the installation where the article was secured in the stand by bolting the attach points to hold down structures in the stand. Once that was completed, the crane was disconnected from the lift spider. 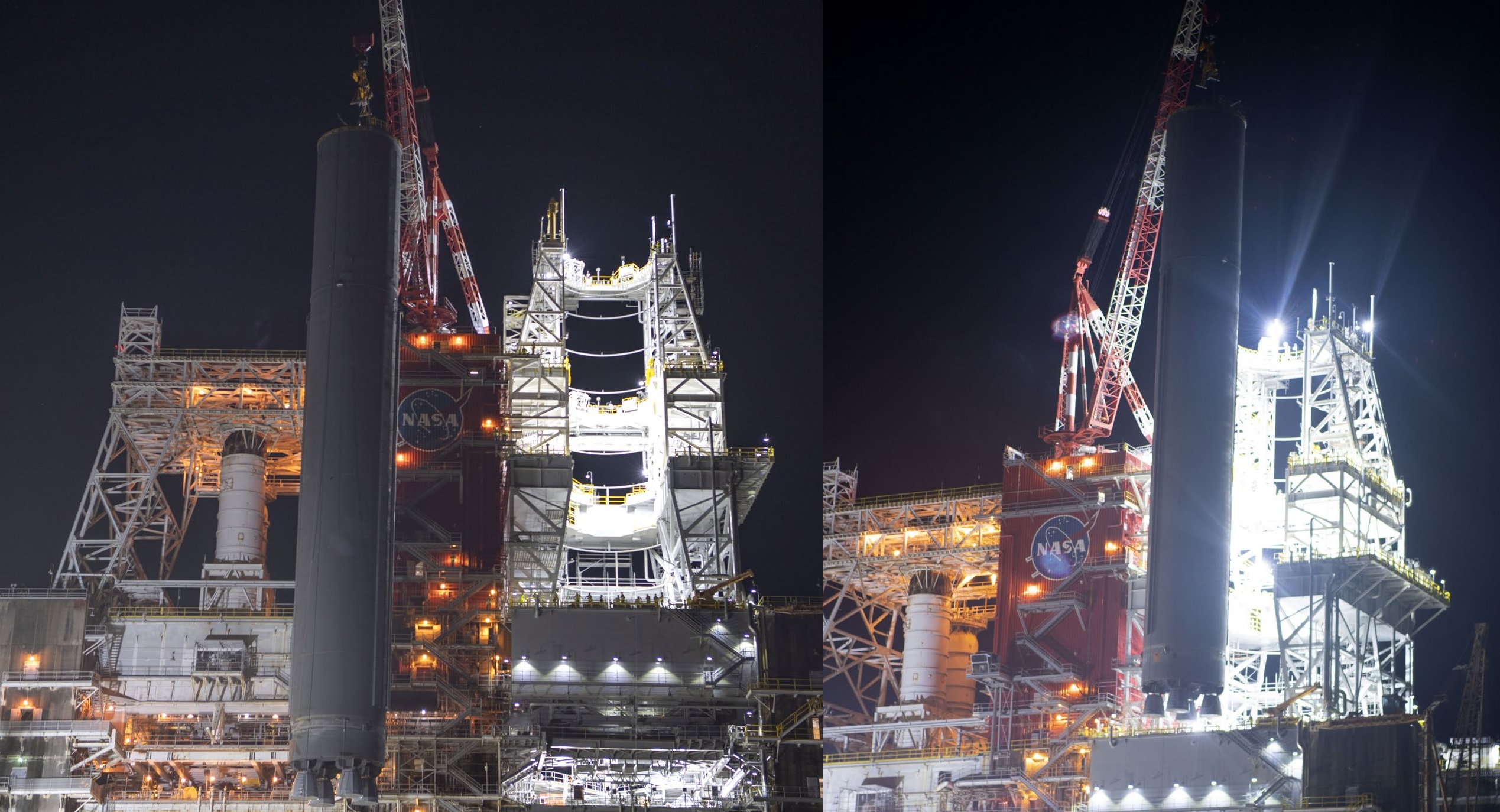 (Photo Caption: The test stand derrick crane finishes vertical installation of the Pathfinder following the initial lift and breakover. The crane continued to lift the test article while pivoting it over to the B-2 position; this also clocked the Pathfinder to line up all the physical connection points. In addition to two pairs of upper and lower hold-down points that lock the stage in the stand, the stand will service the stage via the same four Core Stage umbilicals on the Mobile Launcher at KSC: two tail service plates in the engine section and one each in the intertank and forward skirt.)

The Pathfinder was locked down in the stand for a few days. “The Pathfinder Vehicle objectives were to confirm the correct placement and ability to secure the vehicle at the Solid Rocket Booster hold downs for the forward attachments and the aft attachment points,” Barry Robinson, B-2 Test Stand Core Stage Test Project Manager for NASA at Stennis, said in an email. “It was also used to verify the proper clearances from all fixed and movable platforms and structures.”

The test article also allowed for additional fit checks of parts of the newly renovated B-2 position. “Confirmation of access points located at the forward skirt, the intertank, [and] engine access areas, as well as at the four different umbilical connection points with the facility,” Robinson noted.

“The engine work deck was closed to confirm the correct placement and clearance for any pre/post-test work in those areas,” Robinson added.  “Manlifts and scissor lifts were used to verify the ability to reach work areas at elevations where no platforms exist.”

“As an added bonus, the Hydrogen Burn Off Igniters were also deployed to confirm their coverage at the designated nozzle areas.” 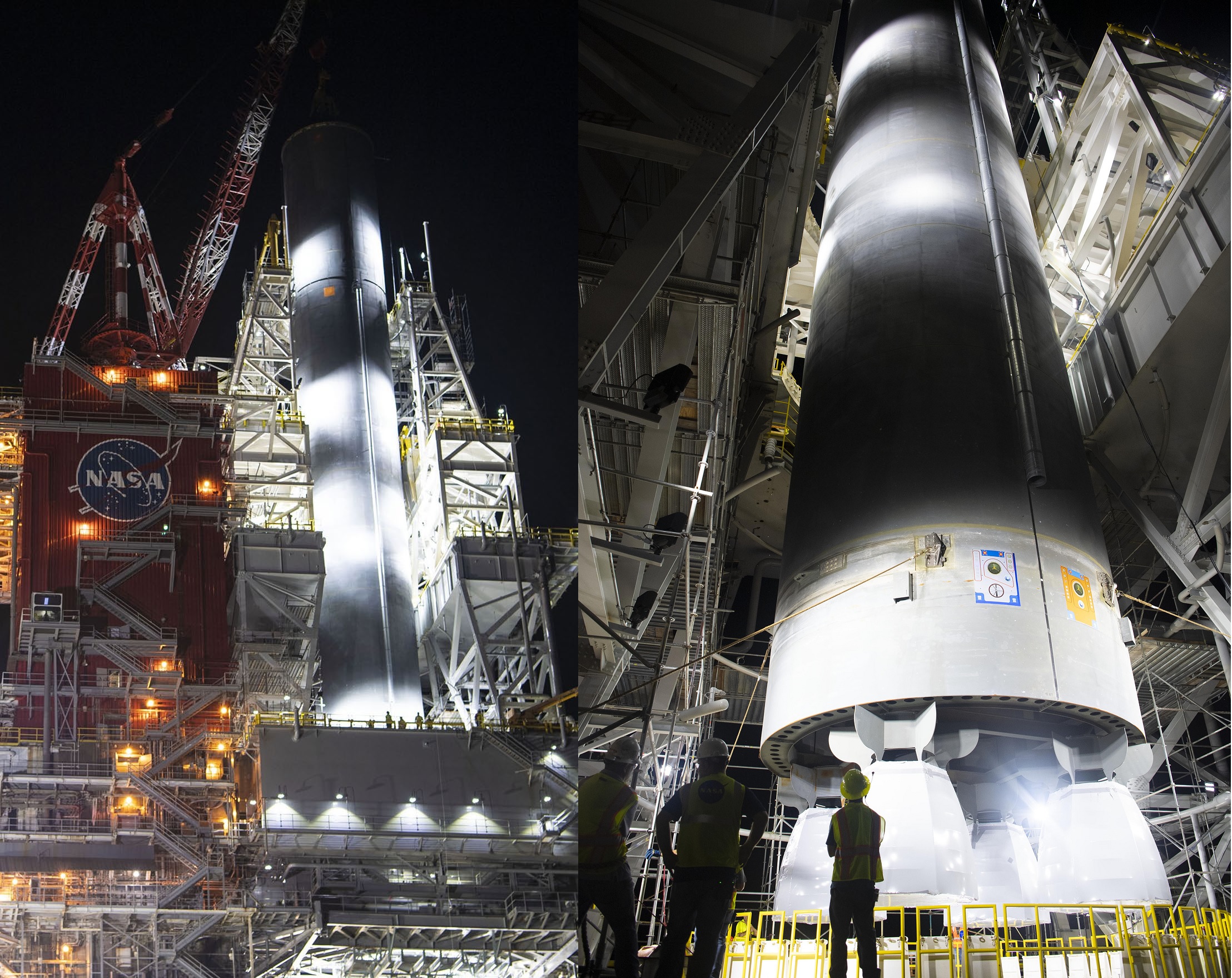 (Photo Caption: The Pathfinder is lowered into the B-2 position by the test stand derrick crane. In the image on the right, placards indicate the position of the two tail service mast umbilical plates on the +Z side of the stage.)

The B-2 position was brought out of mothballs to perform full, end-to-end ground acceptance checkouts of integrated SLS Core Stage units in a test campaign called a Green Run. Flight articles will go through a full countdown, launch, and ascent sequence on their own at Stennis.

The first flight article being completed at MAF is also the first working Core Stage article for the SLS Program, so this first Green Run campaign will involve deliberately checking out the stage, fully loading it with its cryogenic propellants for the first time, and going through a test countdown. The first test with propellant will verify that systems are behaving to specification and provide real performance data to compare with and inform current analytical models.

The campaign culminates in the first and only planned full-duration firing of a Core Stage before the program’s first launch of Artemis 1.