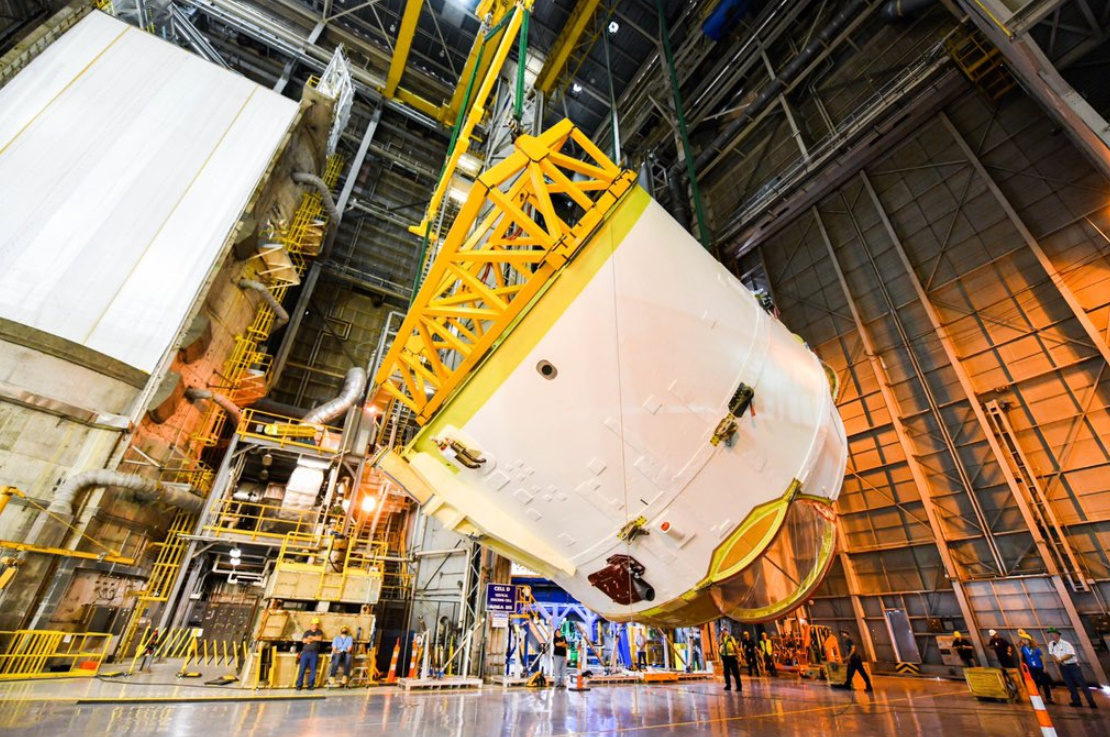 Boeing’s new plans to finish the first assembly of a NASA Space Launch System (SLS) Core Stage horizontally are set to culminate in the use of several new and modified tools to help do something to the engine section it wasn’t originally designed for. All the work to complete standalone assembly of the engine section took place while the element was vertical, but to cash in on the schedule benefits of the new plan it now needs to be turned over on its side on its own so it can then be attached to the rest of the stage.

A set of support equipment surrounds the engine compartment in the aisle of Building 110 at the Michoud Assembly Facility (MAF) in New Orleans. The lifting fixtures and handling equipment will be used for the first time, after being drawn up and built from scratch or modified in the last several months.

The equipment helps the Core Stage prime contractor rotate the engine section and boattail extension to horizontal, roll them over to the rest of the stage, line them up, and bolt them together.

After five months of work to complete standalone assembly and functional testing, the engine section for Core Stage-1 and its boattail extension were rolled back to Building 110, also called the Vertical Assembly Building (VAB), at MAF on September 3. NASA approved the “break of configuration” late on August 23 at the conclusion of a formal review of the required standalone testing and systems work.

“We’re at a point now where we don’t have any more open systems, everything has been closed,” Steven Ernst, Core Stage Engineering Support Manager for Boeing, said.

The engine section and boattail moved into the SLS Final Assembly area at MAF in early April, along with a ship-side support team to finish integration and a lot of electrical ground support equipment (EGSE) to perform functional tests to checkout the element. It wasn’t until the formal ‘go’ was given to breakdown the functional test equipment that work could start to pack everything up and move the engine section/boattail back to the VAB for the “breakover” from vertical to horizontal.

“Test has completed the break of config,” Ernst said on August 30th. “We’ve disconnected all the EGSE and we’re cleaning the area around there. We’ll have to make a path to get the engine section on its way to Building 110, so we’re in the teardown mode but we still have access equipment inside the engine section so that removal and preparing the engine section for transport will really be picking up tomorrow.” 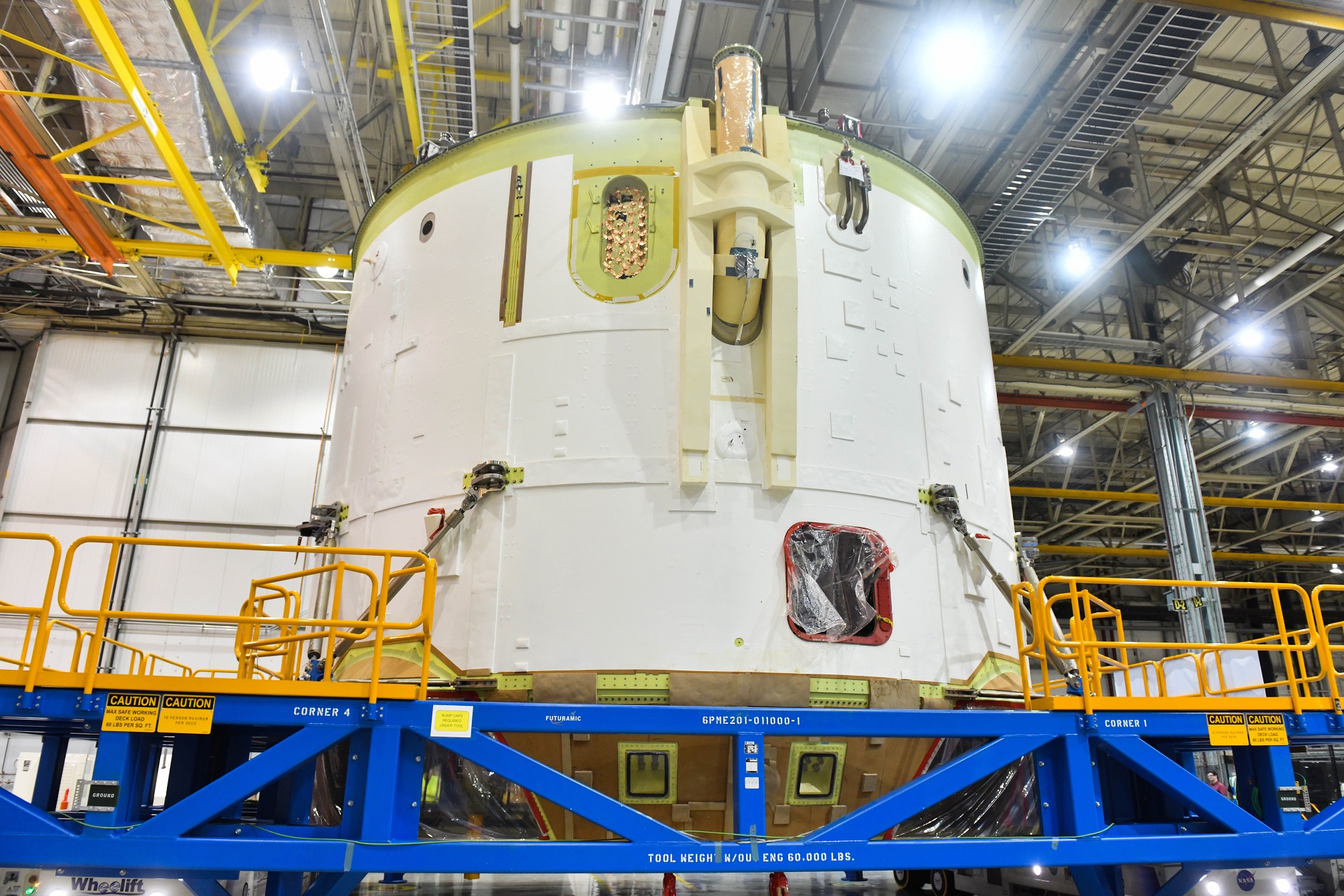 (Photo Caption: The fully integrated Core Stage-1 engine section and boattail extension sit on one of the new final assembly tools under Boeing’s Self-Propelled Modular Transporters (SPMT) at the beginning of the move from the SLS Final Assembly area at MAF back to Building 110, also known as the Vertical Assembly Building (VAB) there. The blue assembly and transportation tool allowed the final five months of integration and testing work for the engine section and boattail to be done in parallel with preparations of the rest of the stage hardware. In addition to taking the engine section work out of the critical path for several months, the tool allowed the work to be done in Final Assembly instead of in Building 110, which is cramped and doesn’t have full air-conditioning.)

In addition to disconnecting electrical, pneumatic, and hydraulic test equipment and cabling, technicians also broke down external scaffolding, began disassembly of internal work platforms, and took down the environmentally-controlled work area inside. With standalone work complete, NASA and Boeing also worked to complete formal documentation and do standard government inspections (also called ‘shakedowns’) of the different work areas inside the engine section.

The engine section is the most complicated element of NASA’s new launch vehicle and the area inside was divided into different levels and work zones for assembly; as those areas are closed out, quality control and other inspections are performed to sign off that the work was completed and the flight equipment is configured as specified.

“To go horizontal with the LH2 feedlines detached from the hydrogen tank, we’ve had to manufacture some tooling struts that tie the LH2 feedlines over to the primary structure and hold those in place during transportation,” Terry McGee, Engine Section Engineering Manager for Boeing, said in mid-August. “So we’ve got to put that in and then we’ll be ready to start pulling out the internal access stands.” 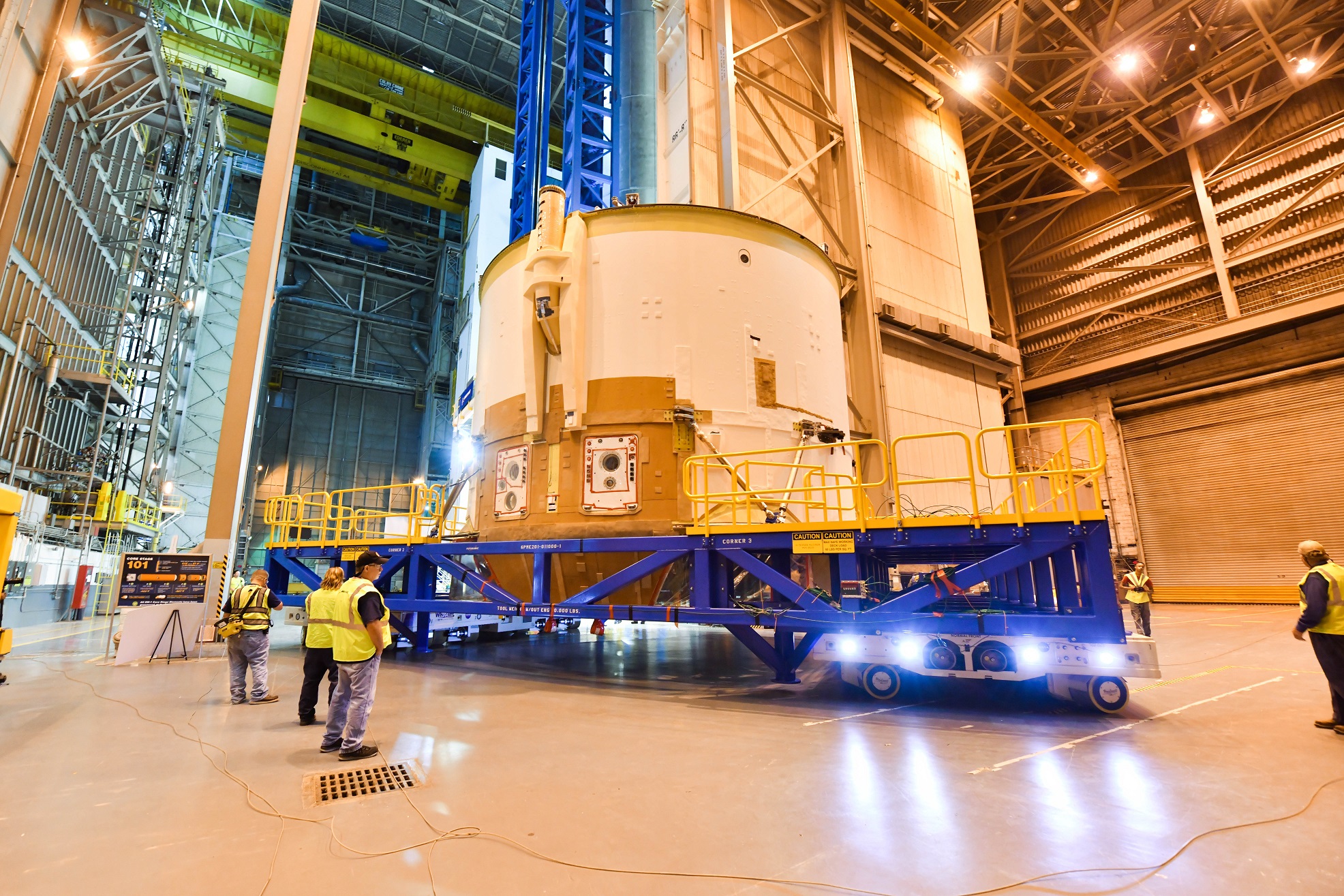 (Photo Caption: The +Z side of the engine section/boattail are seen as remotely-controlled SPMTs carrying it make the turn from Building 114 (to the right) into Building 110 on September 3. Most of the exterior thermal protection system of the flight hardware has been finished with white paint or foam, with the exceptions of the exposed, green-colored primer stripe around the top and the brown-colored cork around the umbilical plates and on some of the facets of the boattail fairing.)

The indoor Manufacturing, Assembly, and Operations (MAO) Self-Propelled Modular Transporters (SPMT) that Boeing uses to move tooling around MAF picked up the transportation tool and rolled the engine section/boattail to Building 110 the next day on September 3.

Mass properties and lift before breakover

After being parked back in the Building 110 aisle, the engine section/boattail assembly stayed secured on the transportation tool it was placed on in late March while the remaining breakover preparations were finished. “There’s a little bit of paperwork we have to clear up, we’ll do another shakedown off of the upper access platform inside, do a FOD (foreign object debris) walk, come back out, make sure everything is clear, then we get right into the lift [operations],” Ernst said.

At that point, the hardware is turned over to the lift team and they begin a set of tasks to carefully handle the just-finished, high-value program asset. “When they’re done and they let us have it we have about two days of prep work to do before we’re ready to breakover,” Corey Dillard, Lead Lifting and Handling Engineer for Boeing, said. 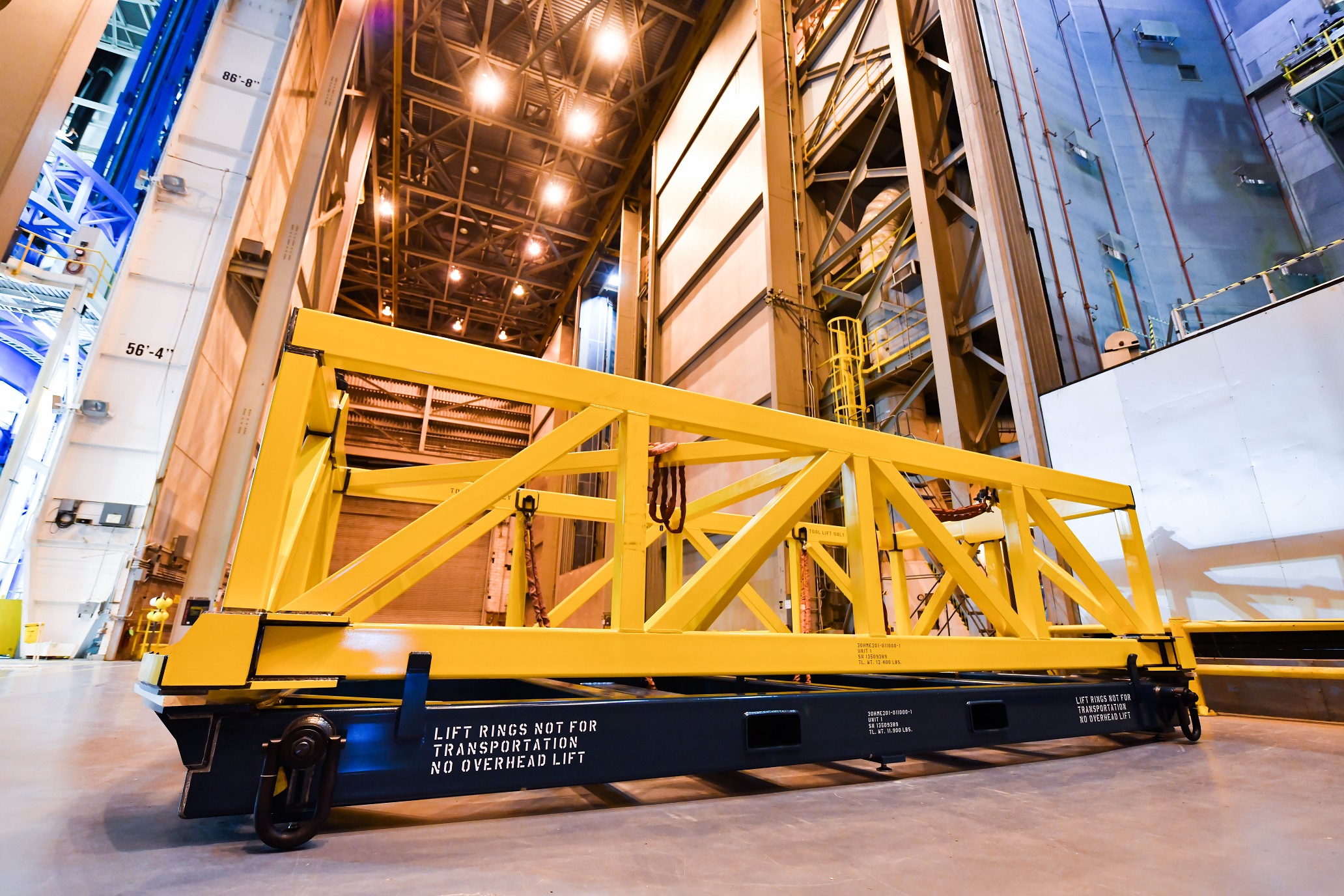 (Photo Caption: The breakover fixture sits in the Building 114 aisle on September 5. The fixture weighs approximately six tons and provides enough mass and height to adjust the center of gravity of the engine section and provide enough space for the two-crane operation needed to rotate the hardware from vertical to horizontal. The truss structure spans across the approximately eight and half meter/twenty-seven and a half foot diameter of the engine section.)

NASA and Boeing revised the final assembly sequence early this year, which connected the remaining big pieces of the stage in a horizontal orientation rather than a vertical/horizontal mix. The last connection of the engine section to the LH2 tank is the most problematic because the engine section wasn’t designed to be handled by itself horizontally.

The first phase of the breakover is to bolt a specially-built fixture to the top of the engine section.

The L-ring is the structural mating interface at the top of the engine section, which was welded to the top of the barrel early in assembly. Similar Y-rings are welded into the LH2 tank structure on both ends. 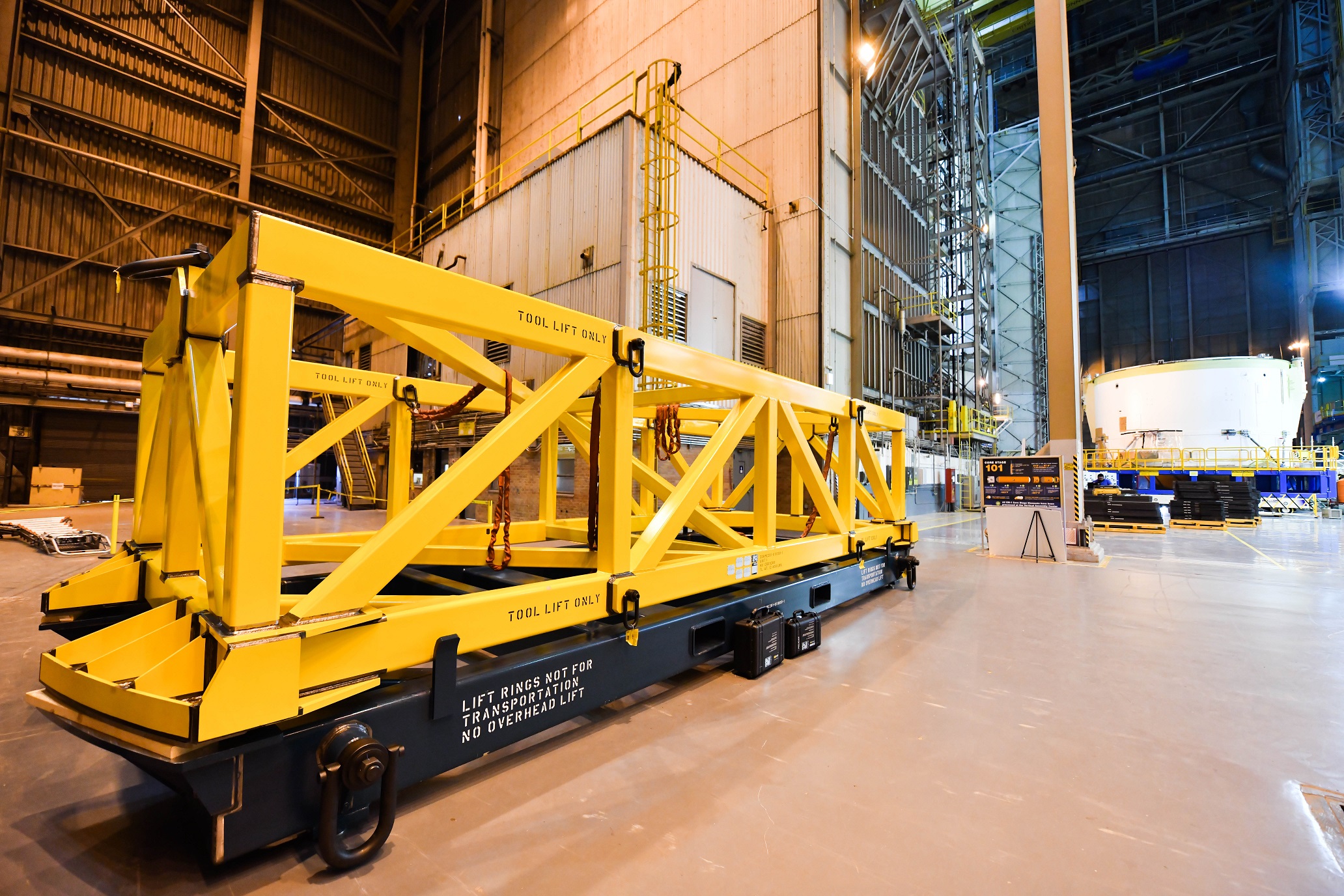 The multi-ton, yellow truss looks like a bridge and it will sit like that across the middle of the engine section barrel,  perpendicular to the two liquid oxygen (LOX) feedlines. Estimated to weigh over 12,000 pounds, bolting the fixture on top of the engine section moves the center of gravity (cg) up high enough so that it can be rotated to horizontal.

“[The] cg was too low on this article to naturally have it break itself over, so that’s one of the reasons that fixture weighs like twelve-seven (12,700 pounds) because we need that weight to roll it,” Dillard explained.

“We had to have that big of a fixture because of cg,” Dillard explained. “The cg is below the SRB (Solid Rocket Booster) ring, so I don’t have enough head weight.”

“I can break it over all I want but it’s just going to hang at whatever angle that cg wants to be at. So we had to overbuild that to get us enough head weight on the forward flange to allow it to want to break over.”

Both the engine section and the fixture first have to be set up to be bolted together. “So first day, first thing we’ll start, the current cleanroom cover will come off [the engine section],” Dillard said.

“It’s a clean room canopy that rotates, it’s got sliders on it that allowed them to integrate the feedlines and their avionics and all that stuff. The lift fixture out in Building 114 will be lifted and weighed, and then installed, that’s probably a full day right there.”

Large I-beams will be used with the cranes to lift and rotate the full assembly, but one won’t be used to position the fixture over the engine section flange for bolting. “To install it, it’ll just be a four bar bridle,” Dillard said.

“That gives us the opportunity to roll it and adjust it to go meet the top of that L-flange and get it an eighth-inch or so all the way around and put it in plane before we touch down, that way we’re not point loading the L-flange.” 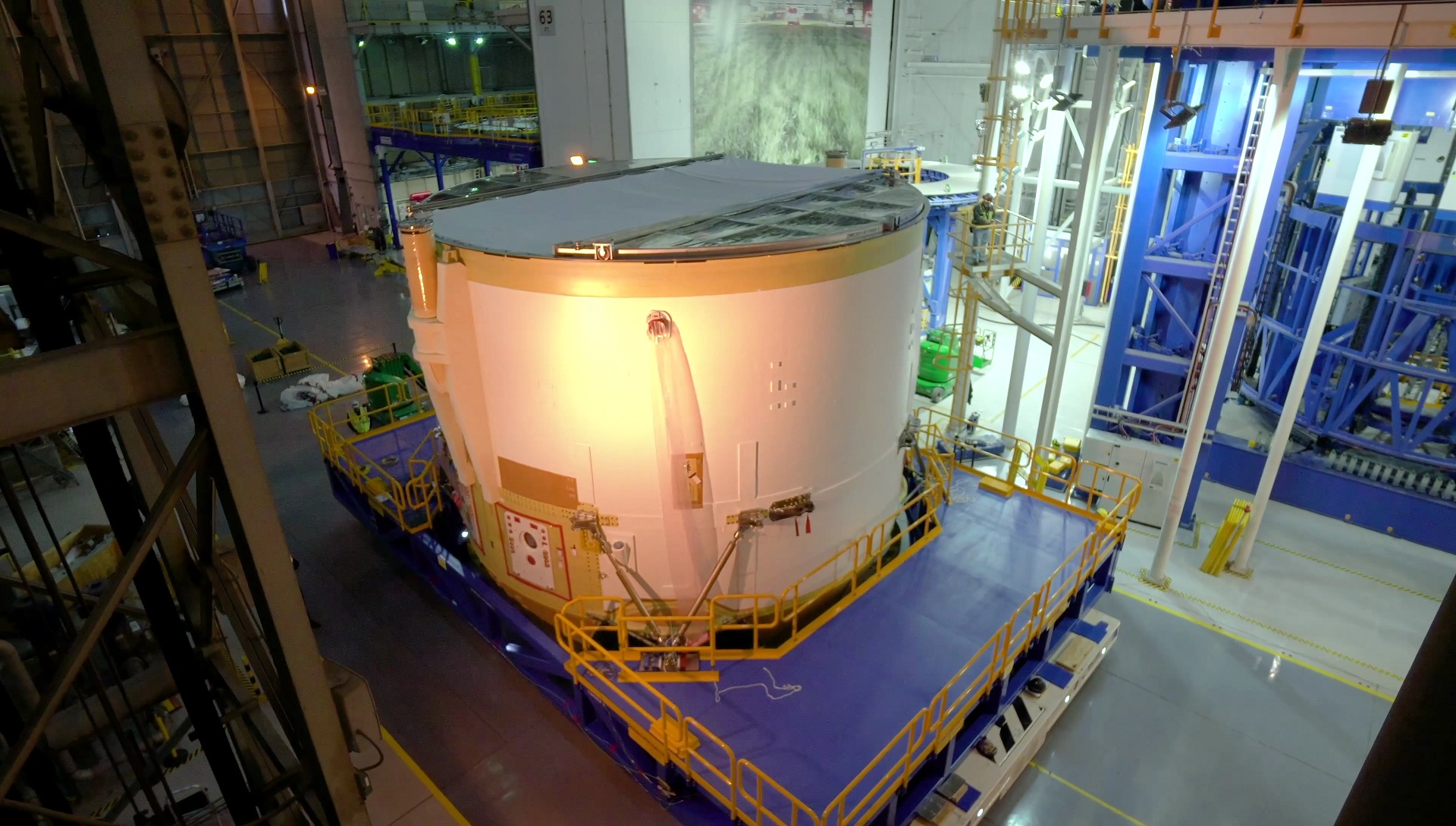 (Photo Caption: The engine section and boattail during the move in early April from the transfer aisle in Building 110 to the final assembly area. The cleanroom canopy can be seen covering the top of the engine section volume. Left in place during most of its standalone integration work, removing it to provide access to the mating flange on top was left as one of the last tasks prior to lifting and breaking over the element.)

“Which is not just lift it and weigh it — it’s rig it, lift it, hold it, get a weight, set it back down. [Then] completely de-rig it, re-zero all our load cells, reconnect, and then lift and weigh it a second time to verify first weight, get the average of two.”

“Depending on hours of the day there, we’re probably saying that’s the end of that operation, that’s one lift plan that will be done,” he added. “Then I’ll have to rotate us onto two shifts because from there forward we’ll be going into continuous operations.”