As part of NASA’s continued effort to ensure a steady supply of astrophysics and astronomy missions, the agency is undertaking the Astro2020: Decadal Survey on Astronomy and Astrophysics.  Currently, in the “Concept Study” phase, the survey includes proposals for four large-scale space telescopes – including the Habitable Exoplanet Observatory (HabEx).

HabEx would facilitate direct observation of exoplanets, carry a primary focus on imaging Earth-like planets around Sun-like stars, and be able to detect biomarkers or signs of possible life in those exoplanets’ atmospheres via spectroscopic observations.

HabEx – taking exoplanet research to the next level:

For millennia, the question of whether or not humanity is alone in the universe has captivated the minds of explorers and scientists.

But until recently, an important part of that equation remained elusive: exactly how many exoplanets exist in our galaxy and the universe?

To help solve the question once and for all, NASA launched the Kepler Space Telescope in 2009 – a telescope tasked solely with searching for exoplanets and determining how common they are.

Kepler shattered all expectations of the number of exoplanets near Earth, revealing over the course of its multi-year mission that not only are exoplanets common throughout all regions within the visible space surrounding Earth but that almost every single star hosts at least one planet.

What’s more, Kepler revealed an astonishing number of exoplanets that orbit within the so-called habitable zone of their parent stars – the zone in which liquid water can exist on the surface of a terrestrial planet.

With that discovery, the desire to create better telescopes capable of directly imaging exoplanets and sampling their atmospheres catapulted to the top of the astrophysics mission wish lists.

But so far only very large planets, many times larger than Jupiter and far away from their host stars have been imaged directly. Spectroscopic observations of exoplanet atmospheres are possible using telescopes and technology is possible but rare and very limited. The holy grail of directly imaging Earth-like planets around Sun-like stars is currently not possible.

Thus, the holy grail of directly imaging Earth-like planets around Sun-like stars is currently not possible. 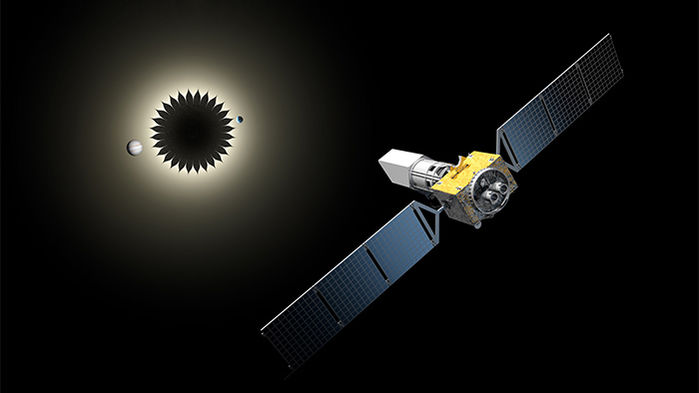 Enter HabEx.  This proposed mission carries the stated goals of:

How will HabEx work?

When directly observing exoplanets, the biggest problem to overcome is the glare of the host star, which is billions of times brighter than the exoplanet.

Two of HabEx’s four instruments are designed to do exactly that.

The first instrument is a star shade, which is actually a second spacecraft that would fly in formation at an average distance of 124,000 km in front of HabEx and block most of the host star’s light but not the light of planets in orbit of the host star.

A dedicated instrument on HabEx would then pick up the light of these exoplanets and measure their spectrum.

With enough observation time, HabEx’s instruments would be able to measure the concentration of water vapor, oxygen, ozone, and dust through Rayleigh scattering.

The telescope would also be able to detect carbon dioxide and methane in an exoplanet’s atmosphere if they were present in higher concentrations than on Earth.

The observation campaign would theoretically involve nine nearby solar systems at a distance of 10 to 20 light years.

They would be observed three times each with an accumulated observation time of three months within the first five years of the telescope’s operation.

Due to the nature of formation flying, pointing the star shade on a different target would be a slow, time-consuming process.  Therefore, during times when the star shade would be repositioned on another star system, HabEx would use its other instruments, including a vector vortex coronagraph, to create family portraits of around 110 exosolar systems.

The coronagraph, a telescopic attachment designed to block out the direct light from a star so that nearby objects – which otherwise would be hidden in the star’s bright glare – can be resolved,  would block the light of the host star but not the light of the exoplanets in the system.

Within the first 5 years, the coronagraph would be used for 3.5 years to create family images of 110 exosolar systems and detect dust, asteroid belts, and Kuiper Belt-like regions of exosolar systems.  From these observed star systems, the ones with rocky planets in their respective habitable zones would be scheduled with star shade observations.

Exoplanet observation with HabEx and its star shade. (Credit: NASA/JPL)

Together, the star shade and coronagraph would take about 75% of the first 5 years of observation time.  The remaining 25% would be dedicated to the scientific community, which would submit observation proposals via a similar selection process as used today for the Hubble Space Telescope.

In addition to the coronagraph and star shade, HabEx is proposed to contain two other important instruments: the HabEx Workhorse Camera (HWC) and the UV Spectrograph (UVS).

The UVS intended for HabEx would provide 10 times larger area coverage compared to Hubble’s equivalent: the Cosmic Origins Spectrograph. With the Hubble Space Telescope close to the end of its life, the astronomic community will lose its only UV spectrograph with HST. UVS would fill that gap.