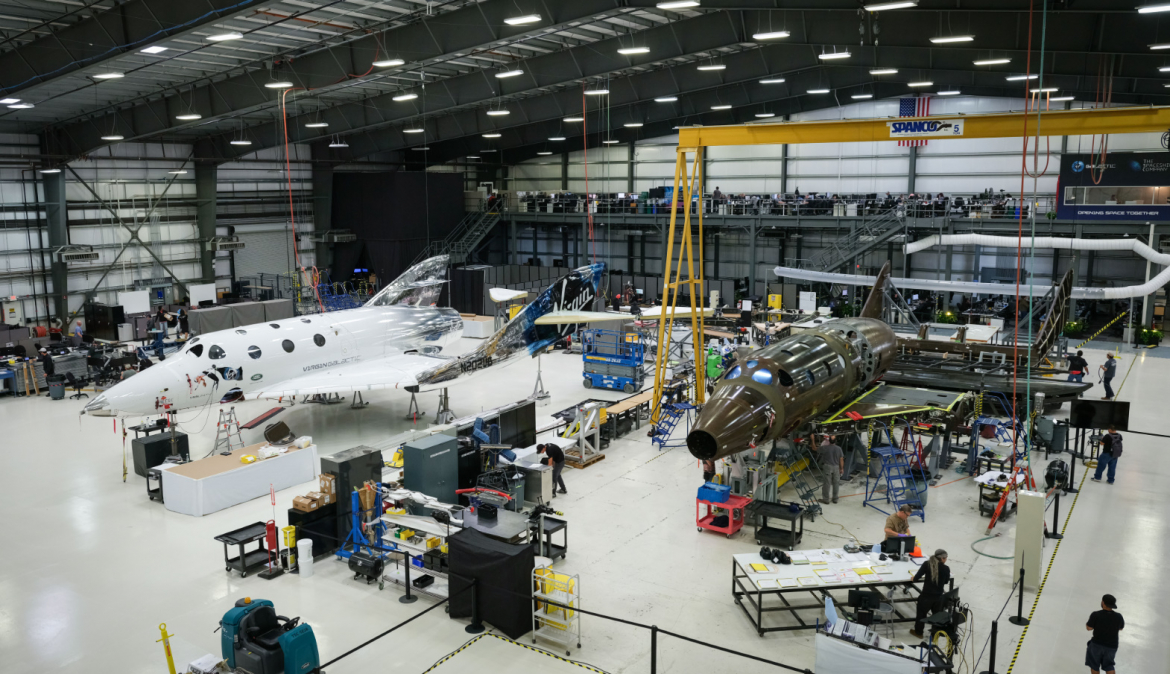 Virgin Galactic and The Spaceship Company have announced new milestones in the assembly of the primary structures for the second SpaceShipTwo in its current fleet. A sister to VSS Unity, the yet-unnamed vehicle is set to launch customers into suborbital space in the 2020s. VSS Unity is being prepared for that first customer flight, although the start date for commercial operation is yet to be revealed.

The company announced Tuesday that it has successfully mated the fuselage and cabin to the completed wing assembly. Also, the two tail booms have been mated to the spaceship’s rear feather flap assembly.

These are two major milestones in the primary structure integration flow, allowing the vehicle to continue to press towards outfitting operations. 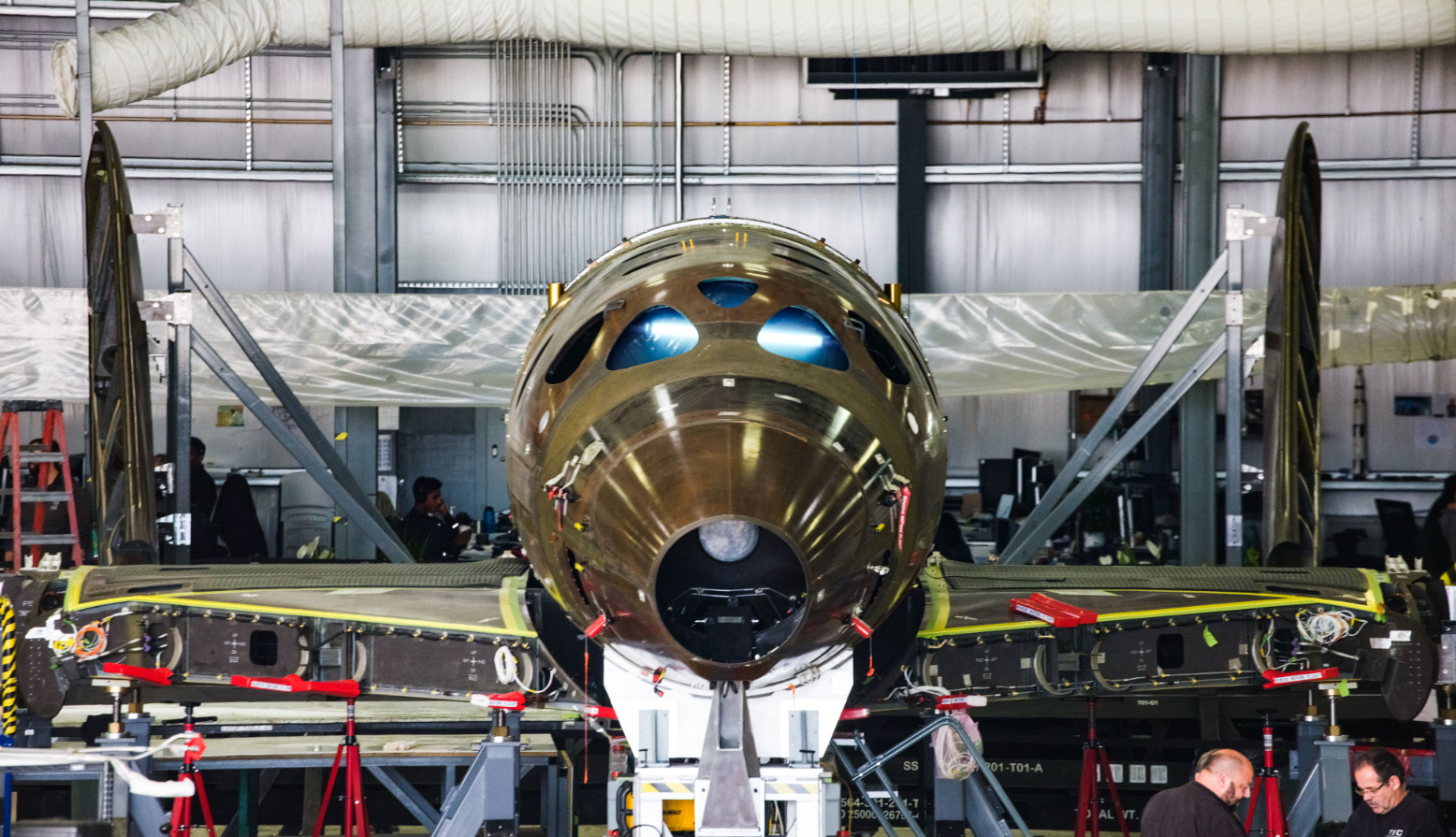 “Our passionate and talented team has made great progress on the next SpaceShipTwo. Seeing VSS Unity adjacent to the assembly of the next vehicle as well as the cabin of our third spaceship makes it very clear that we are building a fleet of remarkable spaceplanes for commercial service,” said Enrico Palermo, President of The Spaceship Company.

Also, the majority of systems integration tasks for the wing is complete, as well as the build of the cabin crew station.

SpaceShipTwo vehicles are assembled in a modular fashion, with the cabin, fuselage, wing and feather assemblies built in parallel.

The company noted that via ‘Employing Design For Manufacturability and Assembly (DFMA) techniques’, this approach grants easier access for systems integration earlier in the build process, as well as an overall shorter assembly duration.

“Before mating the two assemblies, the metrology team used laser trackers to capture precise measurements of the fuselage and cabin and the wing,” added the Virgin Galactic update. “These measurements confirmed that the assemblies would come together as they were designed to.”

Virgin Galactic also noted that the feather assembly is also taking shape in a parallel flow. The inboard skins have been bonded to the boom internal structures, rotated vertical, and mounted on the feather flap assembly. 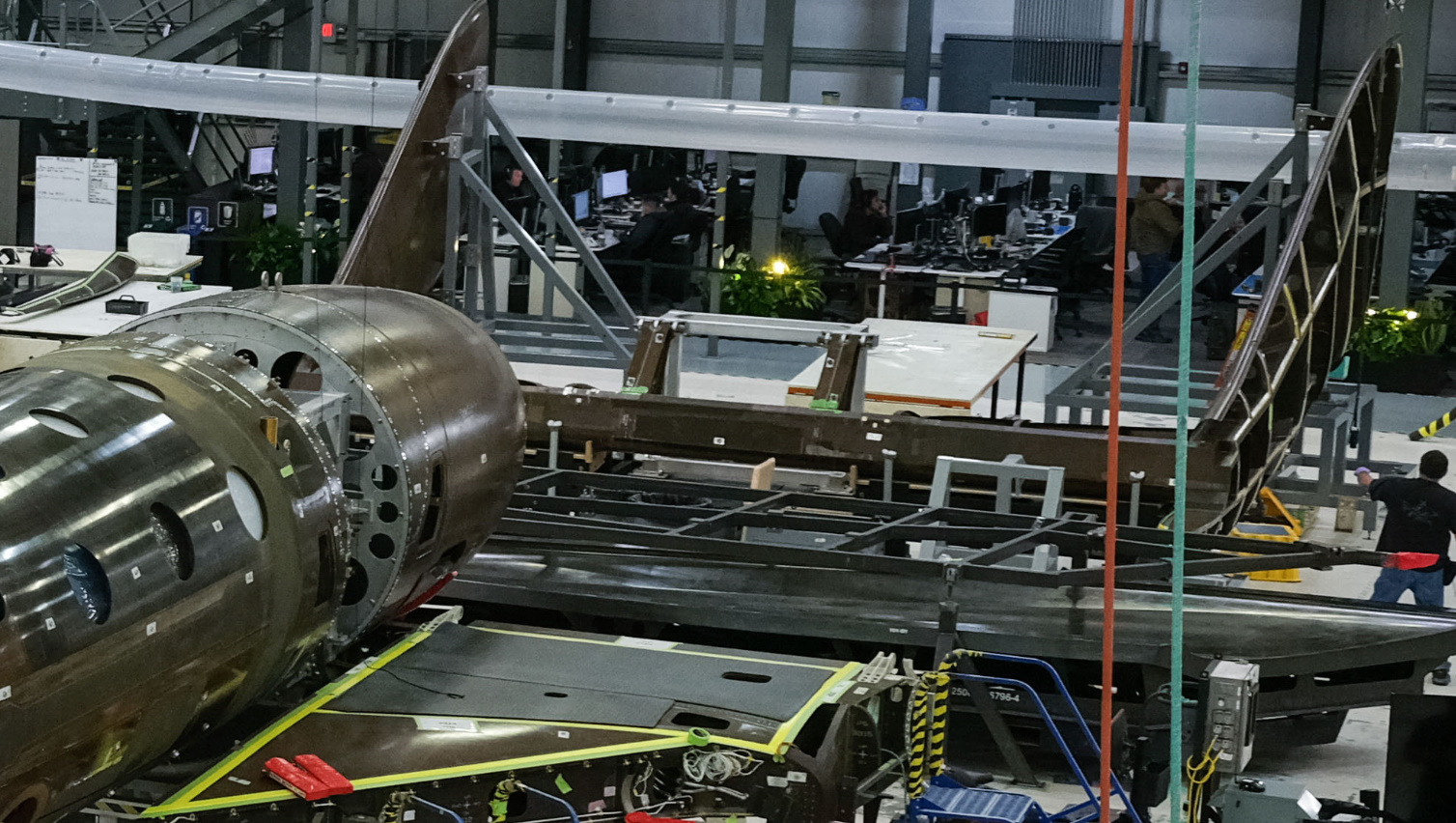 The modular integration of the SS2 elements – credit: Virgin Galactic and The Space Ship Company.

“It is exciting to imagine these two vehicles operating shoulder-to-shoulder from Spaceport America in New Mexico,” added George Whitesides, CEO of Virgin Galactic and The Spaceship Company.

“We have a strong block design which we believe we can replicate to build the remainder of the fleet, continuing our march toward commercial service.”

As to how many SpaceShipTwo vehicles will be built, this will be dependant on demand. However, that demand could be potentially large.

VSS Unity and the new vehicle will be based at Spaceport America in New Mexico. However, Sir Richard Branson has noted his wish to set up numerous ‘spaceports’ around the world, potentially creating a network for high speed “point-to-point” commercial transportation.

A bit of an Easter Egg from Richard Branson. Talking about a global network of spaceports, trans-continental supersonic space flights, delivering passengers anywhere on the world within a couple of hours. pic.twitter.com/WBZ6xvsfPO

Sir Branson noted his ambitions for “a global network of spaceports, trans-continental supersonic space flights, delivering passengers anywhere in the world within a couple of hours,” during an event to mark moving into Spaceport America back in May.

The only outstanding news is when VSS Unity will be given the green light to move into commercial operations.

The vehicle has successfully conducted several key test flights over the past couple of years, with the February 2019 test marking another milestone as the company noted enabled the vehicle to begin modifications in preparation for commercial service.

This includes upgrading the flight deck and installing a passenger cabin. These operations have been continuing alongside the construction of the second vehicle.