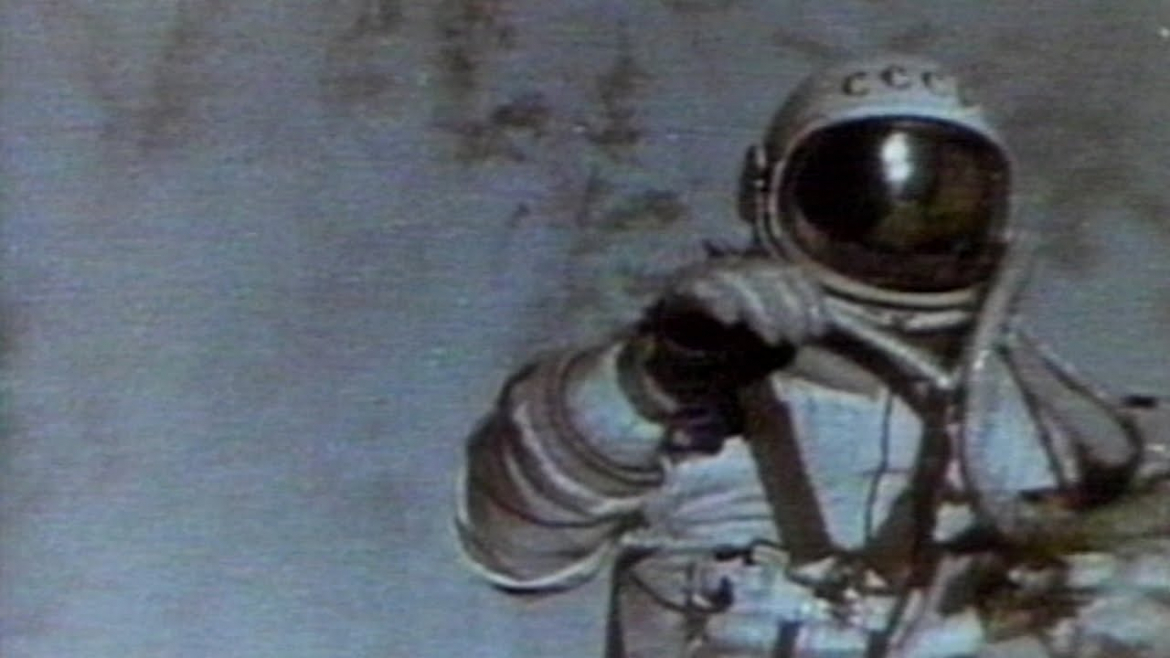 The first person to create art in space, the first person to perform a spacewalk and leave the confined safety of a spacecraft in orbit, the Commander of the first international mission in space history, and the last surviving cosmonaut of the Voskhod era has died at the age of 85.

Alexei Leonov was a pioneer in multiple ways for space exploration, debuting practices and relationships vital to humanity’s continued presence and work in space today aboard the International Space Station.

But he was much more than simply a cosmonaut.

Alexei Leonov – much more than just a cosmonaut:

A veteran of two flagship space missions, Leonov is certainly best remembered for his contributions to space exploration.

But he was much more than a cosmonaut.

Born in Listvyanka, West Siberian Krai, Russian SFSR, Soviet Union in 1934, Leonov lost his father two years later during Stalin’s infamous purges of those who, according to Leonov in his autobiography, “showed too much independence or strength of character.”

Nineteen years later, Leonov would go on to graduate from the Chuguev military pilots’ academy.

“Sunrise” – the first #spaceart created on orbit by Alexey Leonov in March of 1965, on the same Vokshod 2 mission in which he took the first-ever spacewalk. #Leonov #AdAstra pic.twitter.com/bWTLDaottH

Throughout his military career, he attained the rank of Major General in the Soviet Air Force, serving primarily as a fighter pilot.

Beyond that, he was an artist – becoming the first person to create art in space in the form of pencil drawings of inspirational landscapes of what he saw out the windows of his spacecraft and spacesuit helmet.

He also used his imagination for several other portraits, including some of the moon.

The first picture ever drawn in space was created by Leonov after watching the Sun rise over Earth’s horizon on Voskhod 2.

During the Apollo-Soyuz Test Project flight in 1975, Leonov drew portraits of his Apollo astronaut counterparts.

The noted and sad irony that the first person to walk in space died on the same day two NASA astronauts performed what is now a near “routine” spacewalk outside the International Space Station is poignant, to say the least.

But 54 years ago, spacewalks were anything but routine.  In fact, only one person had ever performed one. Alexei Leonov.

In March 1965, Leonov was one of two cosmonauts launched on the Voskhod 2 mission.

The flight was equipped with an inflatable airlock that was extended from the Voskhod module once the crew safely reached orbit.

Inside its cramped confines, Leonov wore a spacesuit designed to allow him to survive outside of a spacecraft in the vacuum of low earth orbit.

Unlike today’s spacewalks which require hours of preparation, Leonov’s historic moment occurred just 90 minutes after Voskhod 2’s launch from Site No. 1/5 at the Baikonur Cosmodrome in Kazakh Soviet Socialist Republic.

In stark contrast to today’s EVAs aboard the International Space Station, Leonov’s historic moment only lasted 12 minutes instead of the multi-hour endeavors now undertaken by astronauts and cosmonauts.

As EVA-57 ends, a wonderful tribute to Alexei Leonov from the ISS crew. pic.twitter.com/4bYj92VoXJ

But it was the drama that occurred when Loenov re-entered the spacecraft that nearly made him the first person to die in space.

The first EVA carried numerous risks and unknowns, one of which was the fact that Leonov’s spacesuit inflated and expanded in the vacuum of space to the point that it became much more rigid and preventing him from being able to bend at his joints to turn around in the airlock to close the hatch.

Not wishing to cause alarm, Leonov did not report any of these issues while they were happening.  Instead, he took matters into his own hands and opened a pressure release valve on the suit, dropping the suit’s internal pressure below safety limits and risking the bends – a life-threatening condition where rapid pressure changes can cause nitrogen gas to form in a person’s bloodstream.

Thankfully, Leonov, to all reports to this day, did not suffer the bends during his self-induced rapid depressurization.  However, his body temperature rose to such a point during the EVA that he nearly suffered heatstroke.

But even after Leonov was back inside the airlock, he and his fellow crewmember had trouble sealing the hatch due to thermal distortion caused by the delay in Leonov’s ability to re-enter the craft.

Once safely back inside,  Leonov also experienced numerous other technical challenges and difficulties that could have proved life-threatening.

These included an inability at first to restore center of mass to the spacecraft after orienting it for reentry because the crew was unable to return to their seats do to the bulky spacesuits and the fact that the craft was only designed for one occupant, the failure of the landing module to disconnect from the orbital module until 100 km in altitude, and a 46 second delay to the deorbit burn which caused the craft to land nearly 360 km away from its planned location.

A Leonov painting of his own spacewalk, from 1990 pic.twitter.com/pCllLOi2JT

Once safely on the ground, recovery was fraught due to the extreme winter conditions at the landing site, heavily forested terrain that prevented the recovery helicopters from landing, the fact that the Voskhod 2’s hatch was blown open pyrotechnically after landing (exposing the crew to the harsh conditions), and that the cosmonauts’ lives were in danger from bears and wolves – both of which were highly aggressive in the area during mating season.

Making matters worse, the heater systems malfunctioned in the Voskhod capsule, dropping temperatures inside the craft to -5° C (23° F).

Recovery forces on skis finally reached the crew one day after landing but were unable to extract them from the site, instead building a makeshift log cabin and fires at the area before the crew subsequently skied out to waiting helicopters several kilometers away two days after landing.

Following his history-making spacewalk in March 1965, Leonov was reassigned to a series of other missions that were all canceled or delayed for various reasons.  He would not return to space for 10 years.

The delays ultimately proved yet again historic for Leonov, with the Soviet Union deciding to name him the Commander of the Soviet half of the 1975 Apollo-Soyuz mission. 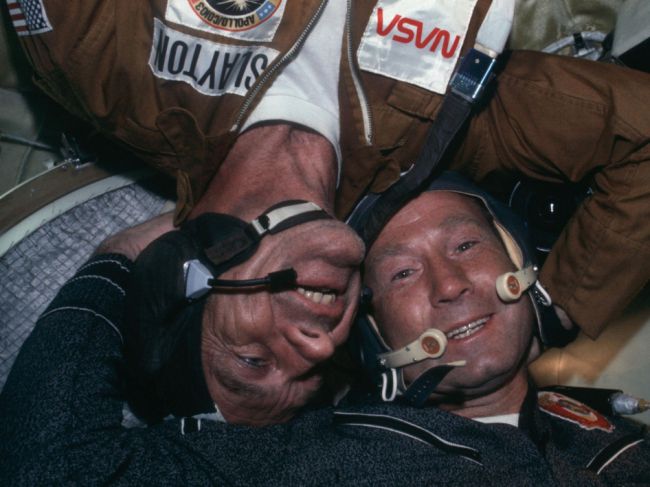 The historic meeting of the Cold War rivals in space saw the docking of the Soyuz 19 vehicle with the final Apollo spacecraft.

The flights marked the first international mission in space history, the first link-up of an American and Soviet craft in space, and the first time that a Soviet citizen (Leonov) entered a U.S. spacecraft.

A notable symbol of detente, falling escalations between the United States and Soviet Union in the Cold War era, the mission in large part paved the way for the eventual international cooperation of the U.S. and Russia that would follow 18 years later with the creation of the International Space Station program and the beginning of U.S. Space Shuttle flights to the Russian space station Mir.

Following his role as Commander of Soyuz 19, Leonov became Commander of the Cosmonaut Team, or Chief Cosmonaut, in 1976.  He held that role until 1982 before eventually retiring in 1992.

In addition to his artwork, he was also a screenwriter, co-writing a script for the Soviet 1980 science fiction film The Orion Loop.

He also co-wrote a dual biography and history of the Space Race with U.S. astronaut David Scott titled Two Sides of the Moon: Our Story of the Cold War Space Race.

He was also a contributor to the 2007 book Into the Silent Sea.

But his contribution to space exploration will be what he is forever remembered for.

His first spacewalk, anything but routine in the day, paved the way for more prolonged and numerous ventures outside of spacecraft, and his role uniting the United States and the Soviet Union in peaceful cooperation in space continues to this day aboard the International Space Station.

But ultimately, Leonov himself put it best speaking after his Voskhod 2 mission saying, “building manned orbital stations and exploring the Universe are inseparably linked with man’s activity in open space.  There is no end of work in this field.”