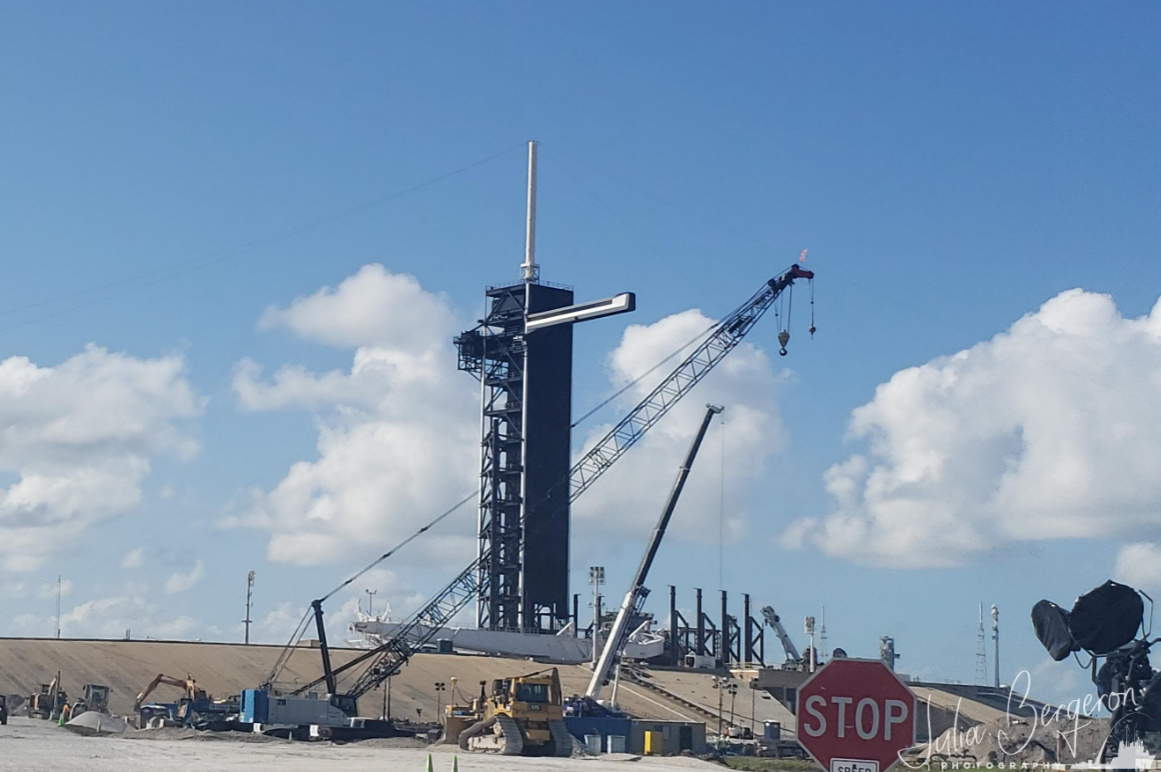 The construction of the new Starship launch and landing facility at Pad 39A is in full swing as heavy equipment lays the foundations at the iconic Kennedy Space Center pad complex. Built alongside the 39A ramp, a new launch mount will be installed for what will be the maiden launch of SpaceX’s Starship Mk2 prototype rocket. The facility also includes a landing pad that will be eventually used for returning vehicles.

SpaceX is building a fleet of Starships, initially with Mk1 in Boca Chica, Texas, and Mk2 in Cocoa, Florida.

Mk1 recently enjoyed her big day in the spotlight at the Boca Chica facility during Elon Musk’s Starship update event.

The vehicle was assembled into its flight configuration, albeit not flight-ready. The three Raptor engines installed on the vehicle were not the engine set that the vehicle will eventually fly with during its maiden flight.

The vehicle has since been demated – with the Raptor engines removed – and will now be processed for a test launch to an altitude of 20 KM before returning for a landing at the launch site.

Work is already taking place at the Boca Chica launch site, the area from which Starhopper made its historic 150-meter hop.

A large amount of work is required to ready the launch site to host Starship Mk1, from installing additional propellant tanks – required to feed the larger vehicle – through to a launch mount that will host the vehicle ahead of launch.

The launch of the Mk2 Starship will take place from KSC’s 39A, with work already progressing at pace since approval was granted after environmental impact studies.

I found myself with time to spare yesterday so I took a tour. The Starship pad at 39A is progressing fast. Logistically, I'm wondering how much equipment will have to be moved for a Falcon 9 launch or will the pad be done first? 🤔 #Starship #39A pic.twitter.com/TVTJAzRzGO

Although work on the new addition only began just over two weeks ago, photos show heavy equipment has already cleared a large area next to the 39A ramp providing an outline of the launch mount location and landing pad.

From imagery gained both from the ground and via satellite photos (L2), ditches are being carved in the ‘retention areas’ directly north and south of the main work area, with a ‘Rocket Support Facility’ to be located directly east-northeast.

Foundations for the Launch Mount and Deluge Water System are already being worked along with a circular paved area due southeast, which will be the new vehicle’s landing pad.

The location of the new pad will avoid impacts to the ongoing use of 39A for Falcon 9 and Falcon Heavy launches. However, the launch cadence from the complex will increase exponentially when the new vehicle begins conducting launches from 39A.

According to the Draft Environmental Assessment, SpaceX envisions up to 24 launches per year of Starship and the full configuration involving the monstrous Super Heavy booster. 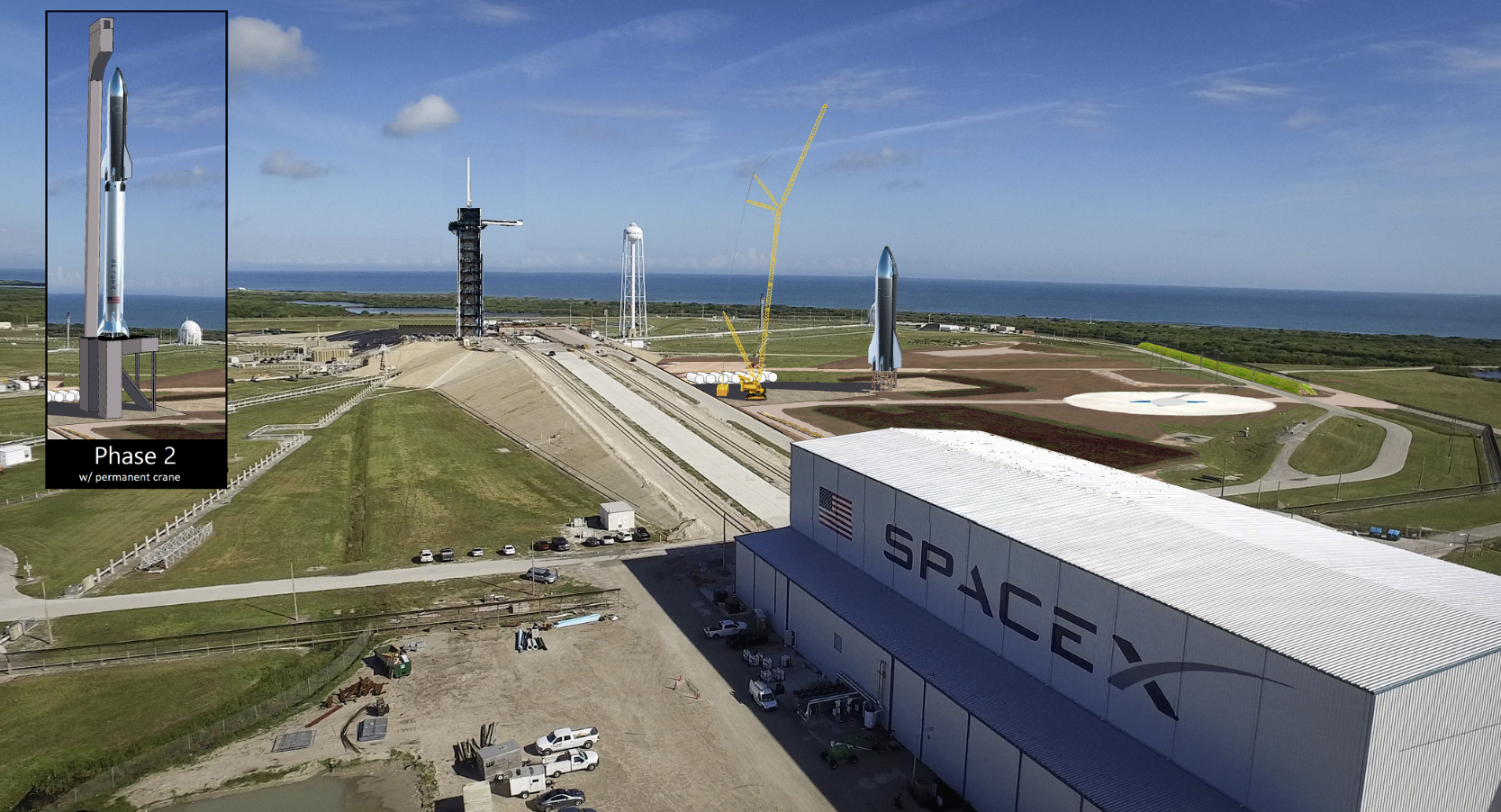 Interestingly, that report also noted SpaceX may initially conduct Starship landings at LZ-1, allowing the company to finetune what is a prototype system before being confident enough at conducting landings at the new 39A landing pad.

The Starship Mk2 prototype vehicle is currently being constructed at a facility in Cocoa, following a near-identical assembly roadmap as its sister vehicle in Boca Chica.

Overhead views of the Cidco Rd facility show the Mk2 vehicle in its two distinct engine and fairing sections, while an array of additional steel rings for future vehicles surround the building.

One of the biggest challenges to come ahead of Mk2’s launch is transporting the vehicle from Cocoa to the Kennedy Space Center.  Co-Founder of Space Coast Launch Ambassadors, and NSF member, Julia Bergeron, recently gathered more details on the logistics involved with the move by investigating the local public records.

“Starship, as large as it is, poses some challenges as an oversized load. A path had to be determined that would have the least amount of obstacles such as power/utility lines. This requires a new clearing from the industrial area as well as contra traffic travel,” writes Bergeron in an overview of the Starship transportation process.

“The path between Cidco Road and the FedEx (facility) is currently being cleared. What is unclear yet is if it will be paved or if they will lay down mats for the transporter. Several power lines have been raised or buried and other utilities are making progress.”

With other companies – such as Virgin Trains – planning construction along the current path Starship will be transported along, SpaceX has been in communication regarding the use of the nearby ramp and keeping the area clear of concrete barriers until after MK2 is moved.

Now that the Starship MK1 presentation is over I am seeing more questions about how SpaceX will move MK2 from the Cidco Rd. facility to KSC. I did a public records request and got answers to many of your burning questions. How to move a Starship 101. (Thread) #MK2 #Starship

The actual road trip for Mk2 will be conducted on a Roll-Lift, as was the case – albeit for a much shorter distance – for the Boca Chica vehicles.

They will transport the vehicle to the SR528 footing, which is a local fishing spot and not originally intended for heavy transport. As such, the plan will involve laying mats on the ground and rolling the vehicle on to a barge with two support tugs.

“Once the transporter is rolled onto the barge they will utilize the Indian River Lagoon to the Canaveral Barge Canal. At that point they will be on the Banana River Lagoon and can travel north to the KSC Turn Basin,” added Bergeron.

The KSC Turn Basin is where all transportation using the waterways arrives, including the recent arrival of the modified Pegasus Barge with the SLS Pathfinder.

From this location near the iconic KSC Vehicle Assembly Building (VAB), Starship will then roll a few miles up the Crawlerway road system to the gates of SpaceX’s 39A.

One on one ESA Director General Johann-Dietrich Wörner